HYT – Heroes of Your Time 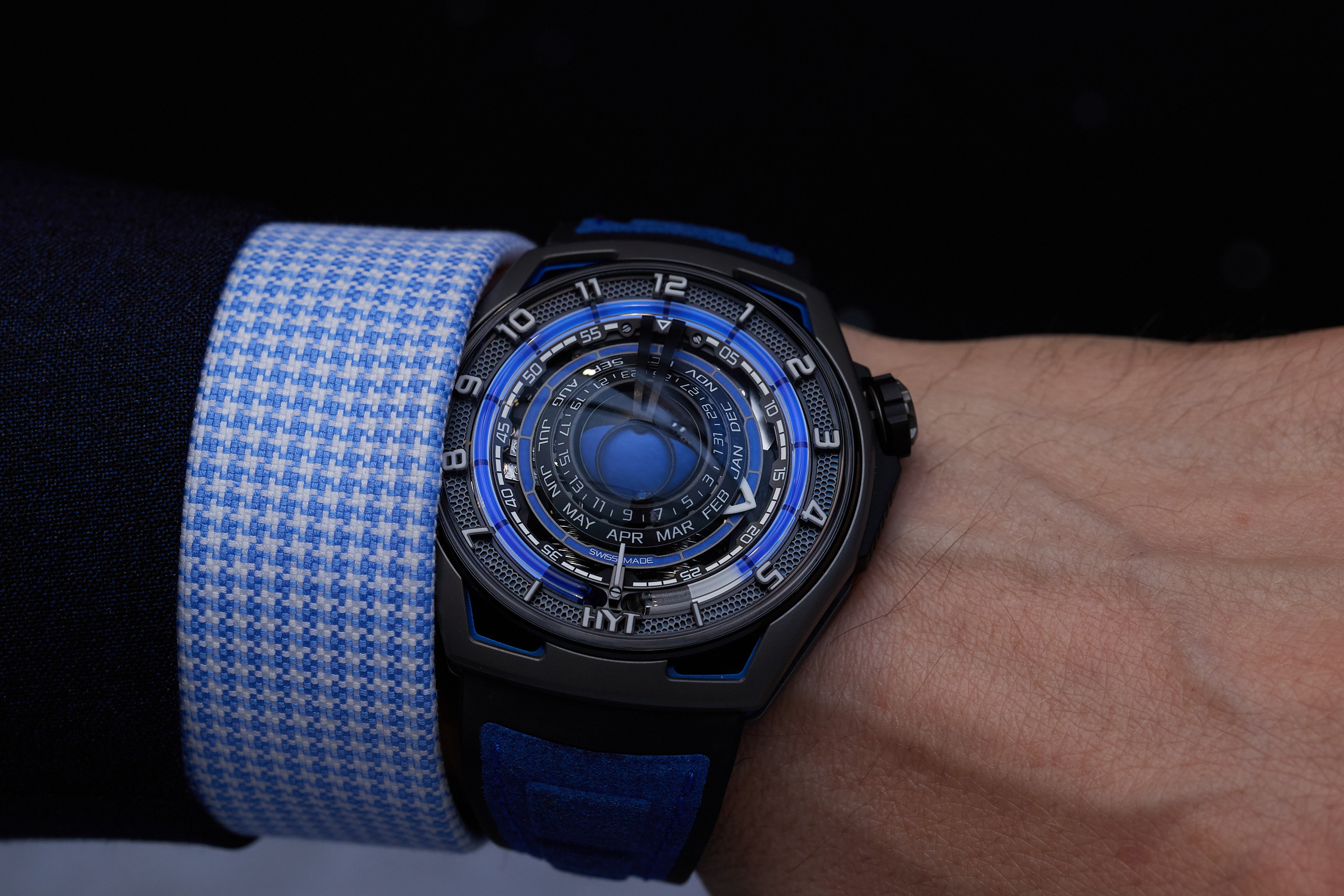 After the shock of HYT going out of business in February 2021, we were happy to read that the creator of mechanical timepieces with coloured fluid displays would resume its operation in November. Davide Cerrato was appointed as CEO, who pressed the reset button on HYT’s strategy. While in Geneva, we were eager to hear about the new directions and see the novelties.

When it emerged ten years ago, HYT created quite a buzz with the ingenious liquid-based time display (they call it ‘mecafluidic’ as in mechanical and fluidic). Two bellows, operated by a mechanical movement, pump a dark and a transparent immiscible fluid in a tiny tube within a permanently sealed module. Showing the passing of time like this on a wristwatch has been pretty unique and it earned them a fan club that included people like Axl Rose, who ended up designing a piece in collaboration with HYT.  The capillary system can take up many shapes and be placed in different structures and surroundings – we spoke with former VP, Creative Director François Nunez in 2019.

In December 2020, the announcement of splitting the CEO position of HYT and Preciflex (the sister company, who develops the capillary system and takes it to markets outside horology) and, that the former COO of HYT would become acting CEO, already suggested that business was not going well. Soon after, the institutional shareholders blocked the raise of capital HYT’s management was seeking to secure, and the company filed for bankruptcy in February 2021.

A new chapter : HYT – Heroes of Your Time

Thankfully, the unique HYT time display will stay with us for longer. The Neuchâtel-based Kairos Technology Switzerland SA, took over the assets of HYT and appointed Davide Cerrato as CEO. He will actually have a dual responsibility as he became the Creative Director, too. With an innate sense for design he has already made his marks on the products of Tudor and Montblanc. Additionally, these previous endeavours targeted relaunching a brand (Tudor) and setting up a separate watch division (Montblanc), which is the exact mix he will need in setting HYT in orbit again. However, this time the dimensions, layers of decision making, creative freedom but also the financial possibilities will be different. Although the announcement came in the second half of November, Mr Cerrato had already been working for a couple of months on defining the new directions for the brand and securing the right team to start the new chapter. 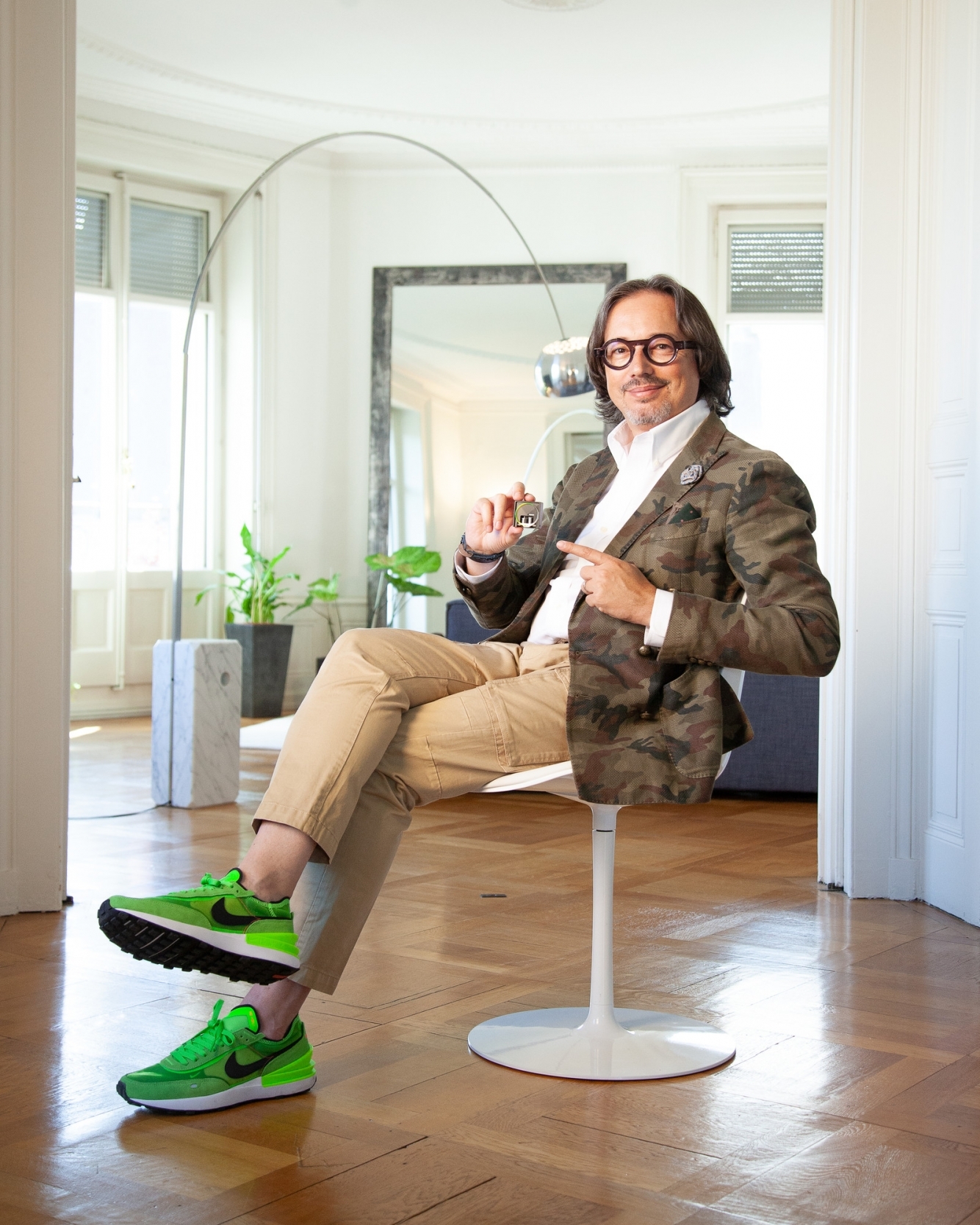 So what is he going to cook from? By fusing mechanical watchmaking and the capillary system HYT has created a niche for itself that no one else really entered into. For a good reason. The technology is outside the traditional spheres of mechanical watchmaking – liquid are normally the medium you want to keep out of a timepiece. It is rather challenging to build a system like this that works as expected, withstands the shocks of wear and is serviceable. If you look at the 10 years of HYT (and some more for the developments that preceded the launch of the company), it is a rather short period to get this right. But now, the knowhow is available in-house and the market has interest in this complication, so using it as a foundation is a no-brainer.

In the last few years, the company explored rather artistic directions as opposed to having the functionality and ergonomics in mind. Increasing wearability, durability, legibility and the move from a single-trick pony to a combination of functionalities developed according to a well-defined product strategy are top priorities for Mr Cerrato. He started this new chapter with a clean slate – if you visit their website, all previous pieces are gone, only the novelties appear.

Talking about strategy, the new brand is starting to take shape. The acronym HYT will have a new interpretation : ‘Heroes of Your Time – for those who live where space isn’t anywhere close to the limit’.  The new collection and the entire brand have been given an intergalactic image. Vivid colours, space-inspired structures, textures and materials will be characteristic of HYT models.

Modularity has been an important aspect during the development. Many functional and visual components can be changed to other materials and designs allowing the creation of alterations and even bespoke pieces, which is the strategic direction HYT stated.

The case has gone through a significant redesign. The height of the previous models used to be in the 18-20mm range, and the size had its influence on weight and wear comfort. Improving this has been a priority for Mr Cerrato. The new models still have a decent diameter (48mm), but the height was reduced to 13mm and the object gradually reaches its max. height and goes down smoothly again, like a (space) Madeleine. Even the back is convex, making it very pleasant to wear. Thanks to the materials (titanium – carbon fibre middle – titanium) the case that consists of 50+ components weighs only 90g. The movement sits in a container.

3 new calibres have been developed with Eric Coudray (Jaeger-LeCoultre Gyrotourbillon, Purnell Escape II, MB&F’s Legacy Machine Thunderdome). Two have already been introduced this spring. The 4Hz manual-time-only 501CM with 72 hours power reserve and the 601-MO with a moon phase and calendar function. Both have been condensed to fit into the smaller case.

HYT will add functions to the signature ‘mecafluidic’ display. The first bird is the Moonrunner with a very attractive suspended moon phase indicator that manages to take a good chunk of the attention away from the circulating fluid.

As the improved ergonomics will encourage riding the spaceship faster therefore, beyond functionality, extra effort has been made in ensuring reliability. Especially, because the tube is very thin and the mechanism is very delicate: an increase of the liquid inside the glass tube by a minute is equivalent to a movement of 1.5 micron of the bellow. It has to withhold shocks and extreme temperatures too.

Thanks to the modular structure of the housing as well as the mechanism, HYT can do better segmentation and price positioning. Watches will be strictly limited. There were too many HYT retailers in the past without true engagement, therefore the network is going to be revised.

Let’s see the 3 novelties HYT is launching into space this Spring.  Based on the two movements mentioned above, HYT created the Hastroid and Moonrunner models.

Hastroid is the time-only version with a seconds and a power reserve indicator in the sub dials. The legibility is really ideal, with big Arabic numerals for the hours on the ring outside, markers on the tube for easy reading and a large minute hand in the centre. The 501CM movement can be observed in the front with the two bellows at 6 o’clock. By the way, hours run from 6:00 until 18:00, then the coloured fluid gets automatically pumped back to the left storage and continues to measure the next 12 hours from 18:00 to 6:00 – like a retrograde hand.

Hastroid is available in two editions: Green Laser with green housing, outer ring and accents, and black fluid, while the Green Nebula is its inverse. 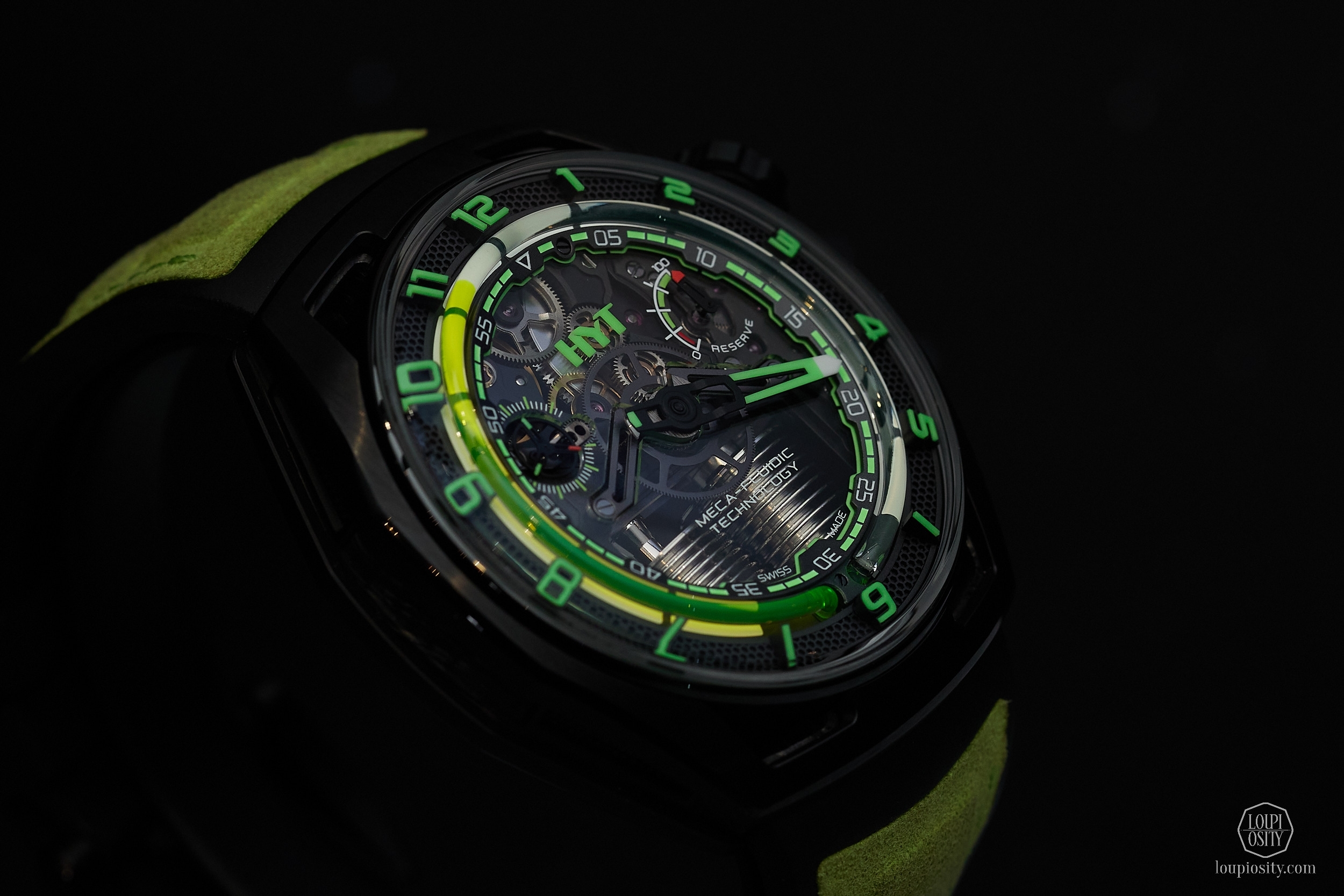 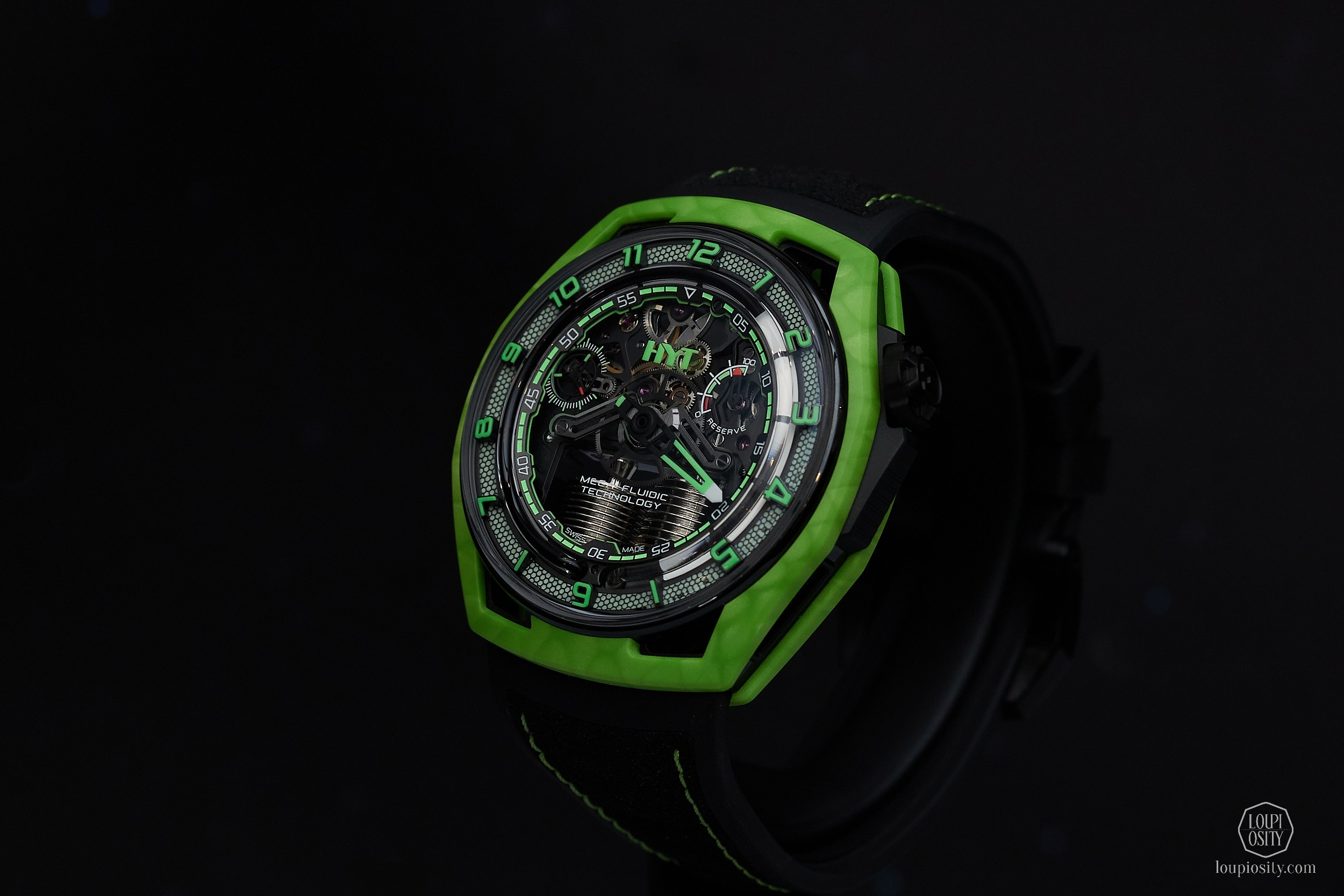 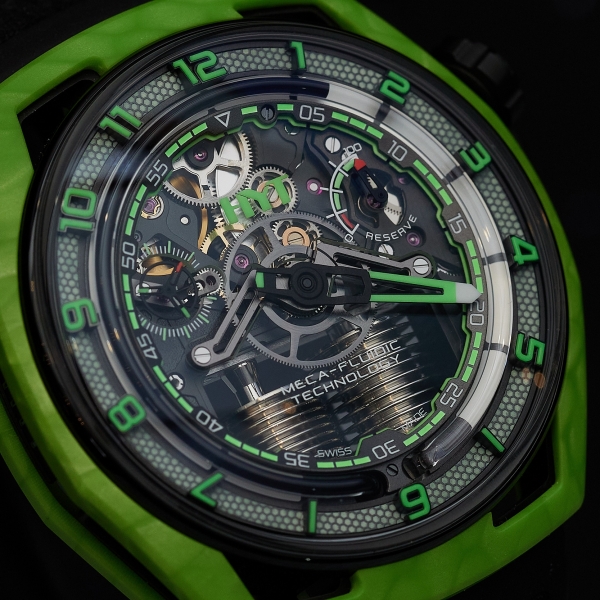 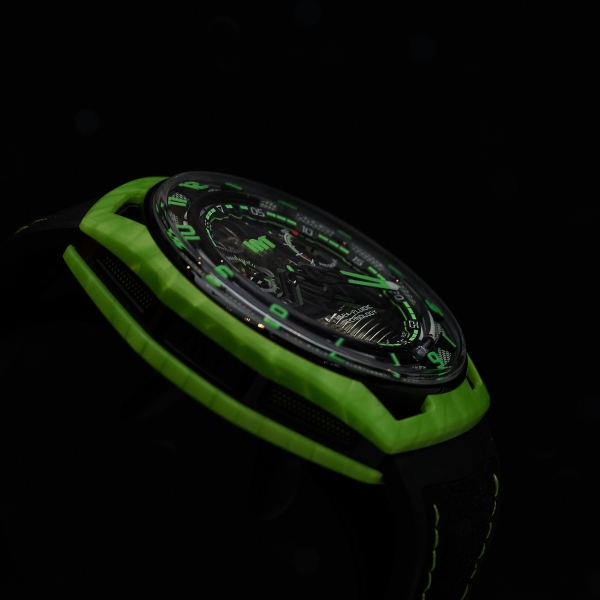 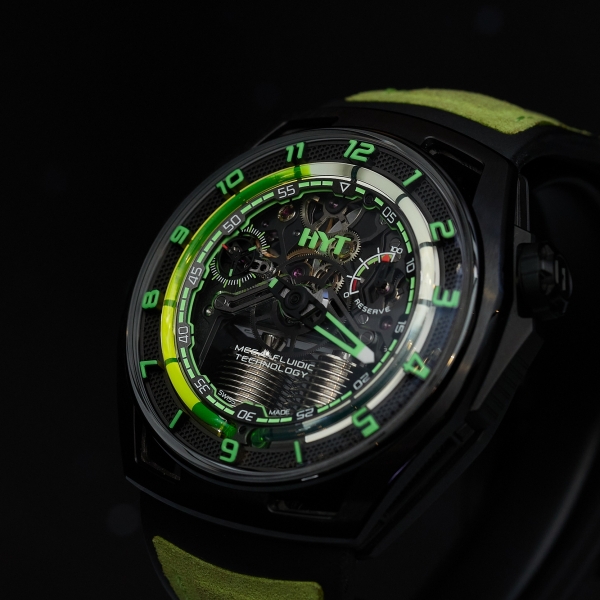 The Moonrunner adds the moon phases and a calendar function to it in an exciting design. Two central rotating titanium belts show the month and the day which can be read at 6 o’clock. They form a nest to the big and beautiful grey – ‘Supernova’ blue titanium moon. An arch from 12 o’clock reaches over the planet and by looking through the ring at its end, you get to see which part of the moon is lit.

When Mr Cerrato mentioned improved legibility he actually meant it – thanks to a generous amount of Super-LumiNova®, all timepieces glow at night. Hands, Moon, fluid, ring, you name it.

The novelties look and feel great and they show the direction HYT is heading to. Solid technical foundations and many challenges to overcome have been inherited by the new team. Seeing the pieces, it is obvious that they dived into it and much has been accomplished in the last months. Yet, this is just the beginning of the work. Wishing you guys fun and endurance! 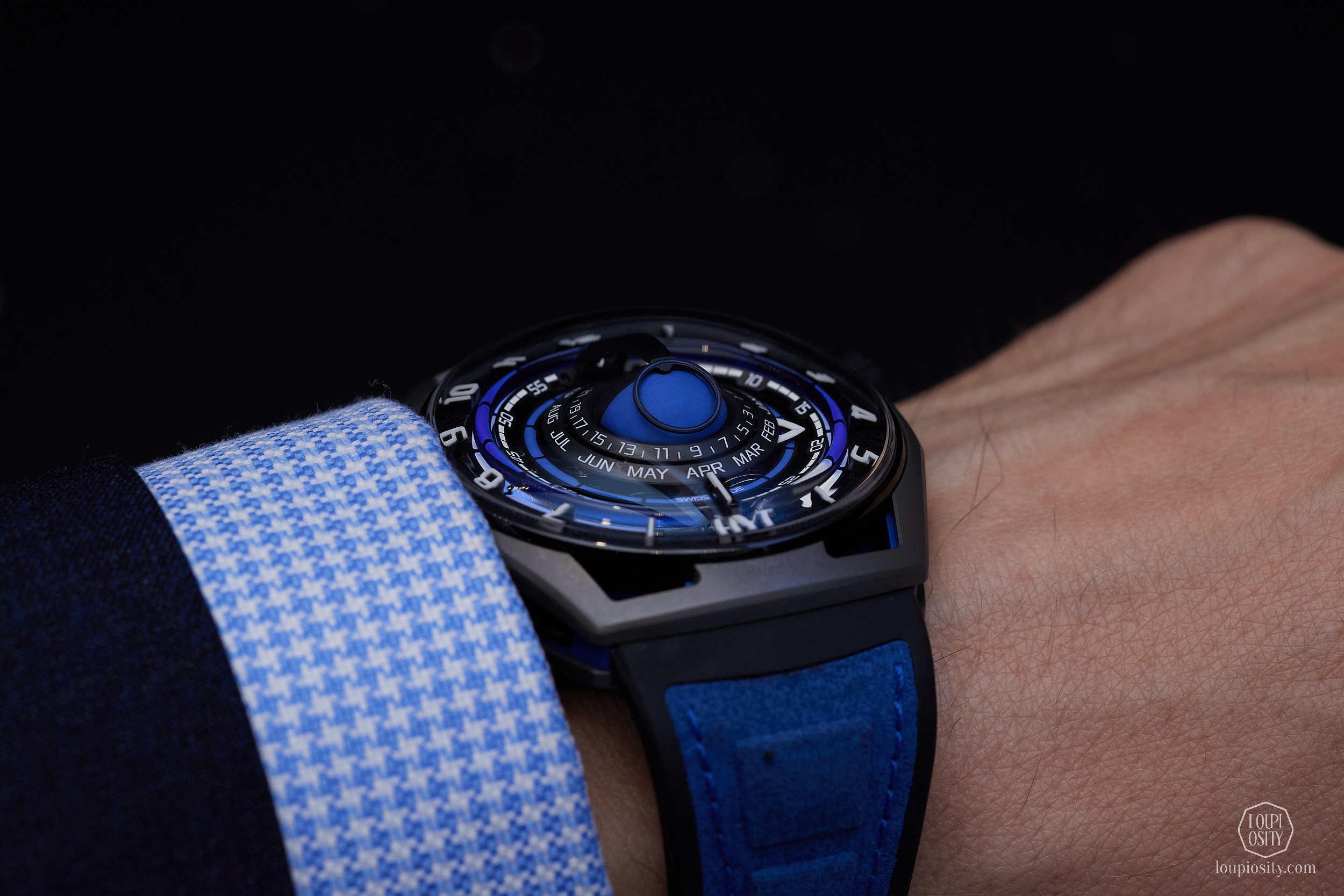 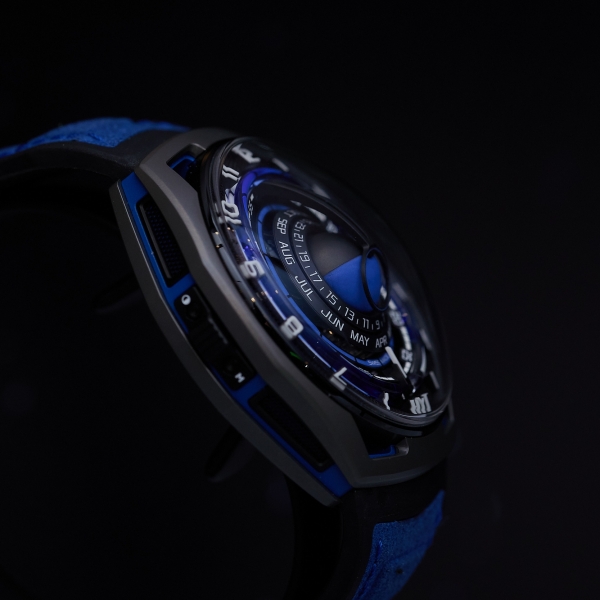 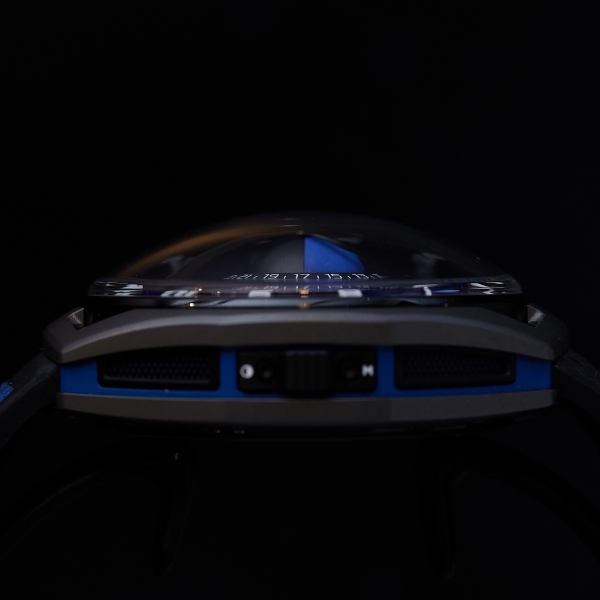 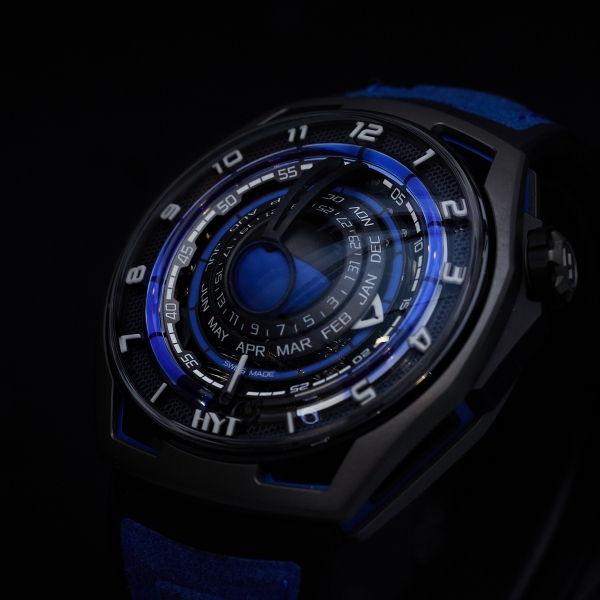 Frédérique Constant at Geneva Watch Week Frédérique Constant presented anniversary limited editions as well as other novelties this spring. We selected two timepieces to show you.IWC Schaffhausen at Watches and Wonders 2021 CEO Christoph Grainger-Herr presented IWC’s 2021 novelties in a mixed virtual and live setting at the Watches & Wonders fair. The brand enriched its 85 year-old pilot watches line with new additions in size and aesthetics, and showcased an extremely shock-proof model produced by their engineering lab called IWC Experimental.Reuge at the Geneva Watch Days 2021 We visited the most musical suite of the Beau Rivage Hotel during the Geneva Watch Days 2021. Reuge filled the historic space with melodies played by stylish mechanical automations.