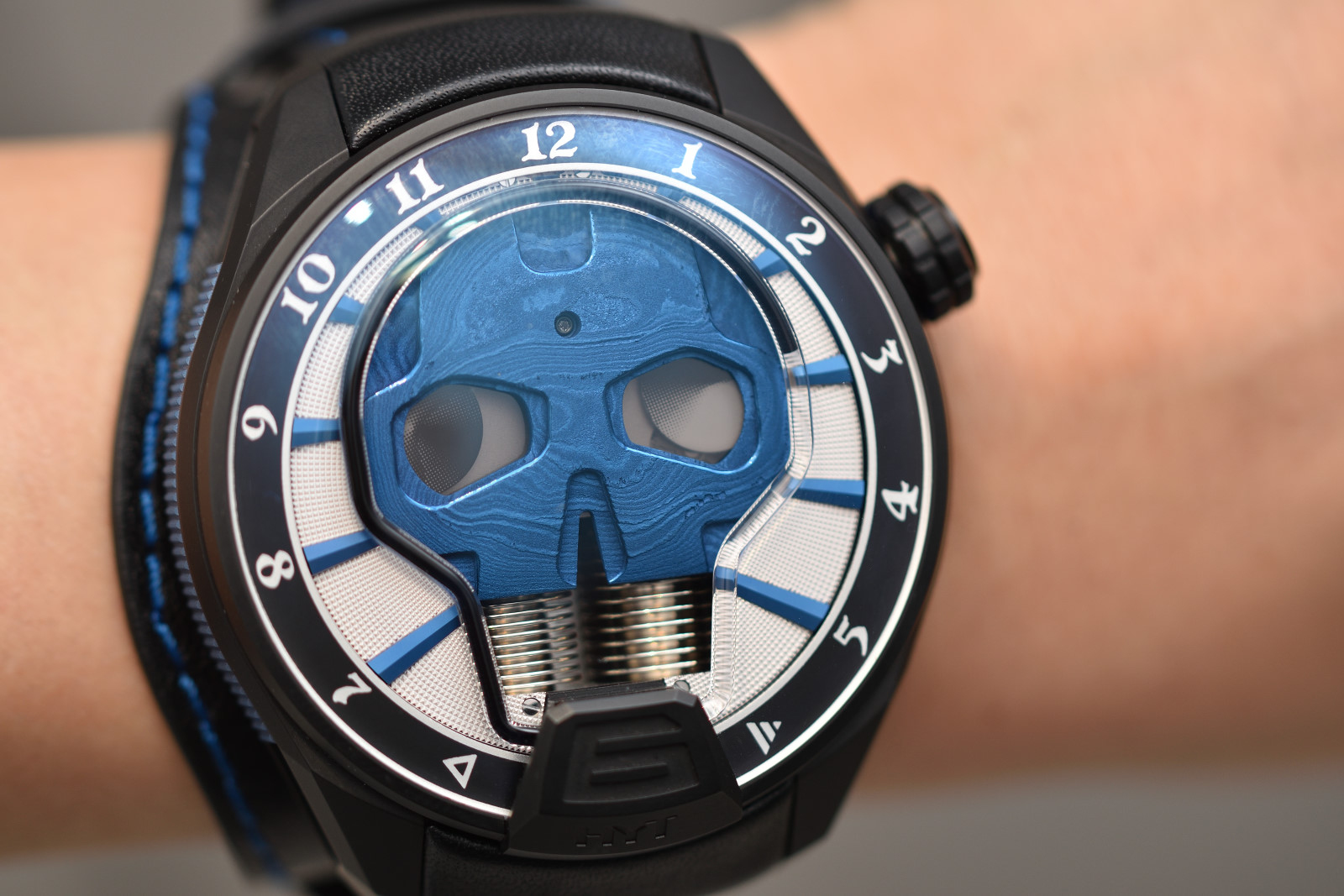 Mid-summer 1987 Axl and like-minded friends announced their Appetite for Destruction and the skull-set Celtic cross LP (for Millennials out there, this is the vinyl record) cover appeared in the record shops all around the planet. The raise of Guns ‘N Roses coincided with the fall of the Wall, the explosive opening between the East and the West and AIDS’ slap in the face of humankind. MTV had infiltrated into the Eastern Bloc through satellites since the 1980s, and although they were not responsible for changing the world’s order, it is probably fair to say that by energizing youth and developing their desires into another dimensions, they pulled out a brick or two from Communism.

I was too young when Guns ‘N Roses reached the heights of musical creativity and fame, but around the Millennium Axl’s voice and Slash’s riffs were normal accessories of my teenage rebellion days. By then, the legendary band formation was hopelessly dispersed in all directions of the compass rose. Still, their tunes gave my parents a hard time, and even as a grown-up, we rocked together from Australia to Europe and the Middle East. As probably everyone, I thought they would not reunite again in this lifetime. However, at Coachella in 2016, Axl and his friends announced their appetite for construction and pulled together the band again. The jungle will be loud again in 2017 – describing my excitement is almost impossible!

2016 was a creative year for Axl Rose. Beyond the reunion of GnFnR, the rock star explored another form of art and co-designed a fine-mechanical watch with HYT. The official presentation took place in Dubai at the Watch Week last December, but the HYT Skull Axl Rose obviously received quite a bit of attention at the SIHH 2017 too.

“And this is Axl and me” – Lucien Vouillamoz co-founder of HYT showed me the photo every fan would kill for on his phone. You probably have only a handful of opportunities to get a shot like that: either escort him to post-concert after parties, like a number of girls undoubtedly had, or create a mechanical watch with him as Mr. Vouillamoz and HYT did.

HYT is not just another watch company, but more of lab where serious research is conducted on small-scale tube and hydraulic technologies, the usage of which goes well beyond application in mechanical watchmaking. Experience gathered in fine watchmaking, such as precision manufacturing of capillary, fluid mechanics developments, injection and diffusion technologies are utilized in other industries, too. These can be anything from automotive to medical devices. While HYT injects excitement into classical haute horlogerie, its sister company Preciflex does it in other industry segments.

The rocker has known HYT before. In fact, he owns a Skull Maori in which rarity, soulful mechanics and coolness merged into a Māori Tā moko marked skull with hydraulic hour marker slowly curling like a serpent. With the will to re-design it in his own spirit, the idea to create the model came from the singer himself. 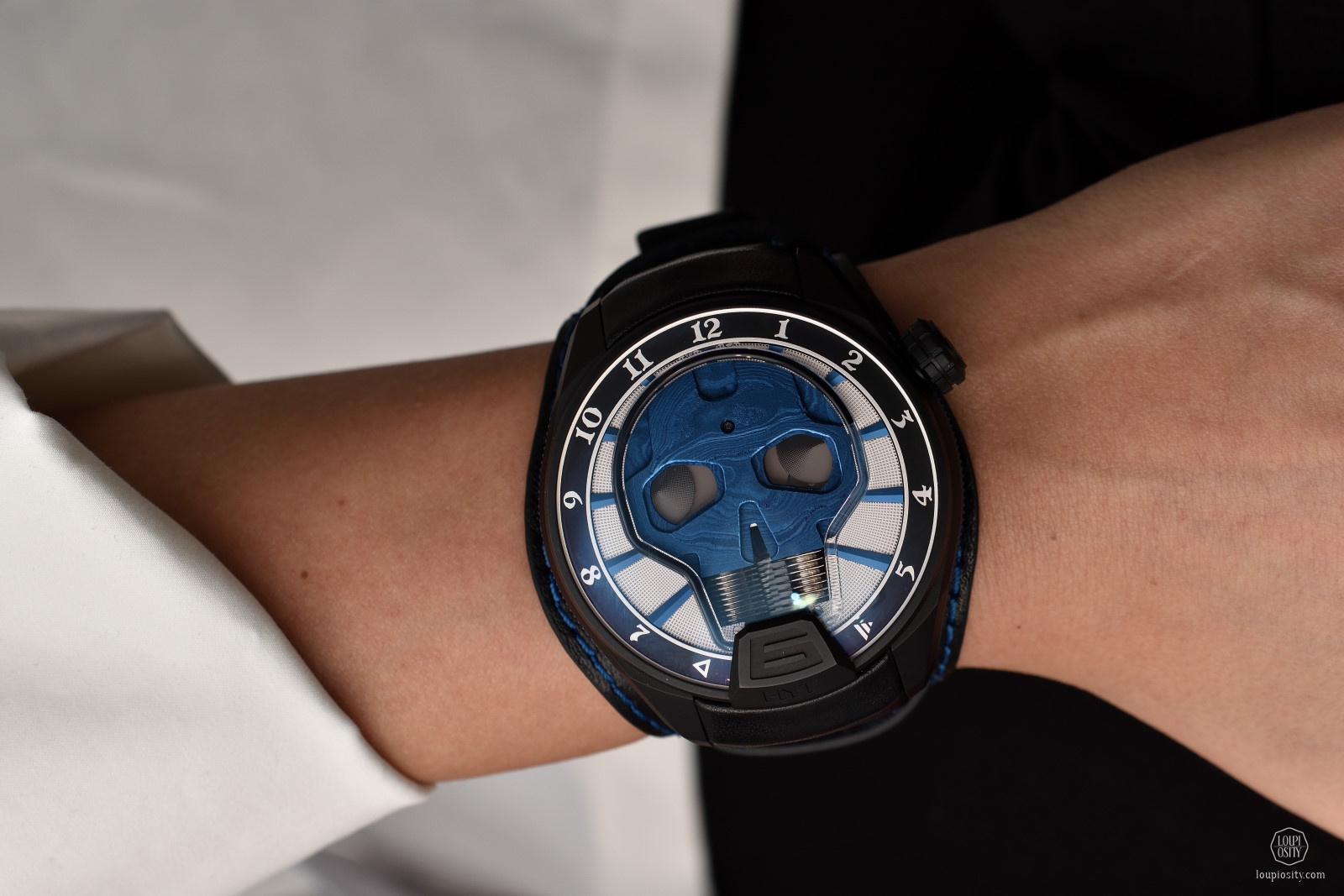 The skull base was made of Damascus steel with a special blue PVD treatment. The same colour appears on the applied indexes and the stitching on the leather straps. In order to highlight them, they opted for black microblasted DLC titanium case and a Clous de Paris pattern rhodium-plated inlay. The bellows, pumping a dark and a transparent fluid in the tube, are in the same rhodium colour and are made from a supple alloy. The fact that while one expands the another is compressed, makes it look like it was snarling. The animation does not end here as the dark fluid travels in the capillary system around the skull indicating the hours from 6:00 to 18:00. When it reaches 18:00, it moves back just like a retrograde hand – it’s pretty amazing to watch. The left eye rotates to the rhythm of the seconds, and the right eye shows the remaining power from the total 65 hours. The base movement, made in partnership with Audemars Piguet Renaud Papi, is the same as in the 2012 HYT H1.

On a sassy little hidden side-note: having time displayed on a single scale by a slowly moving fluid, I think this a perfect example of when personality meets the right functionality. I mean, when did you hear about Axl Rose rushing up to the stage to the exact 1/1000 of a second of a chronograph?

The model will be created in a 25 piece limited batch. 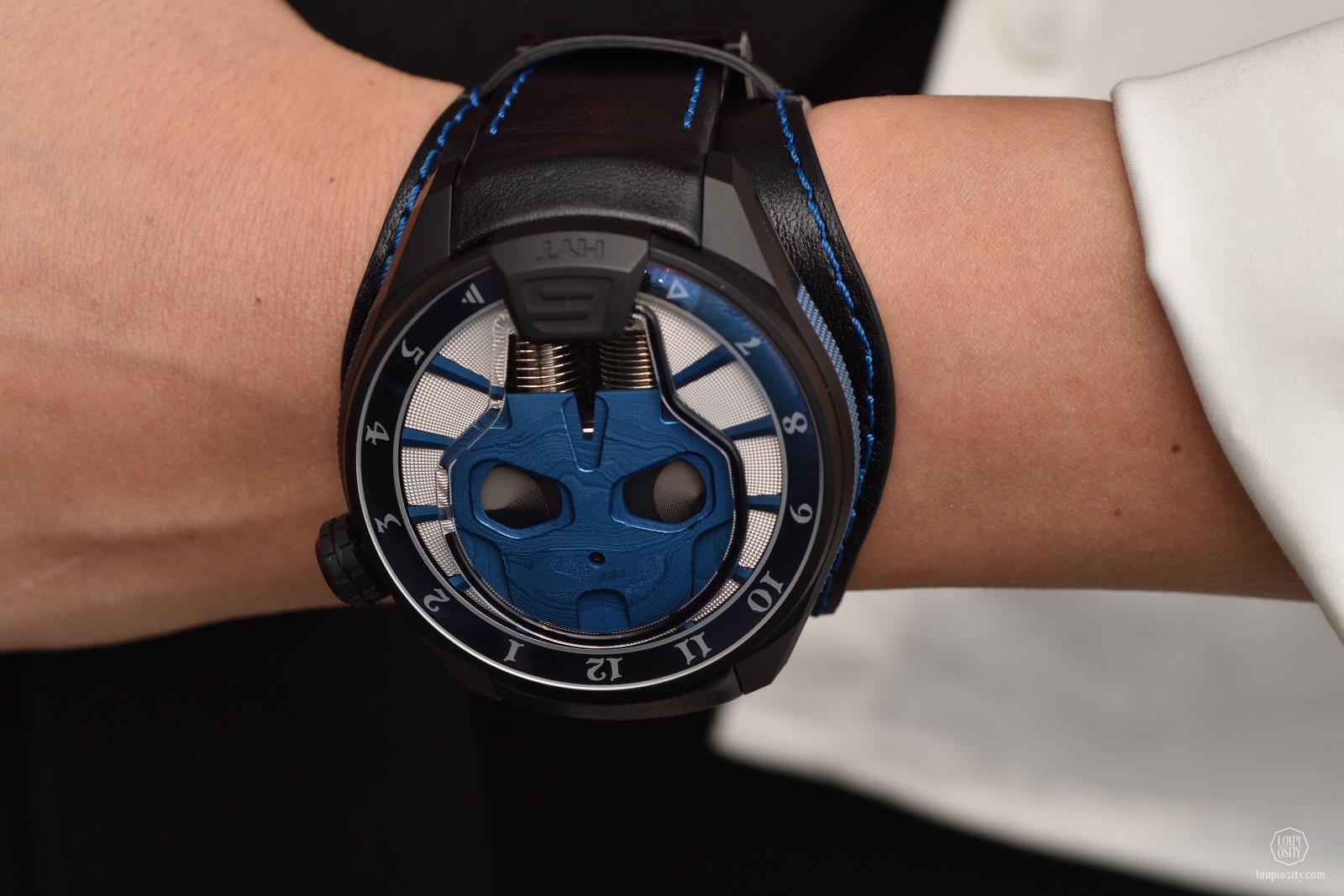 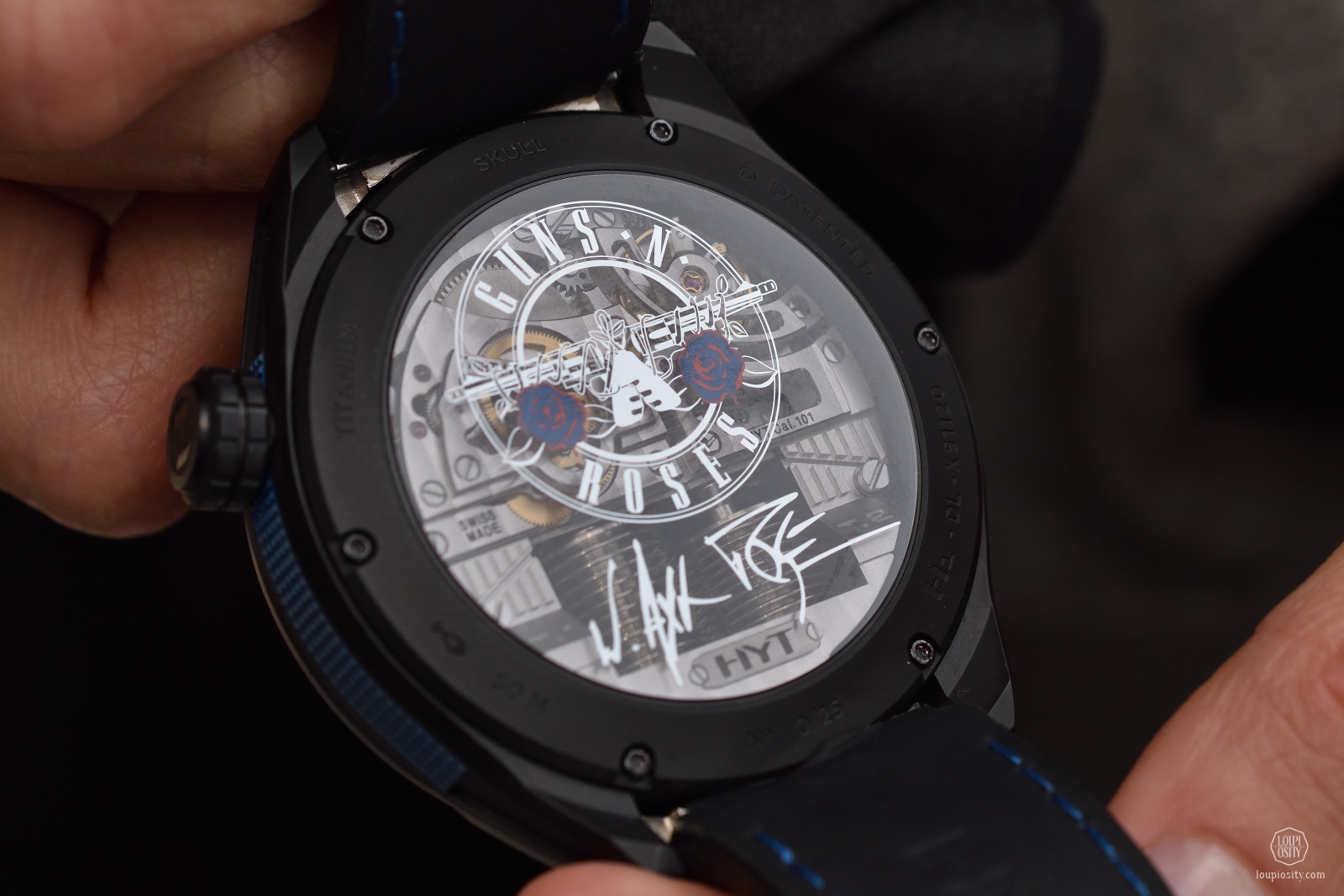 A pocket watch model was also designed with the same dial layout, but this time in a pocket watch case with a spooky glowing function. There is a crown at 4:30 with the help of which a dedicated barrel spring can be wound. By pressing the button the energy is released which turns a micro-generator that generates electricity. This activates two LEDs which makes the green liquid glow.
The case is 59mm titanium and black DLC titanium with a customisable, leather-embossed cover, completed with an angular chain. This time the skull is faceted and treated with PVD. The model comes in an 8 piece limited edition. 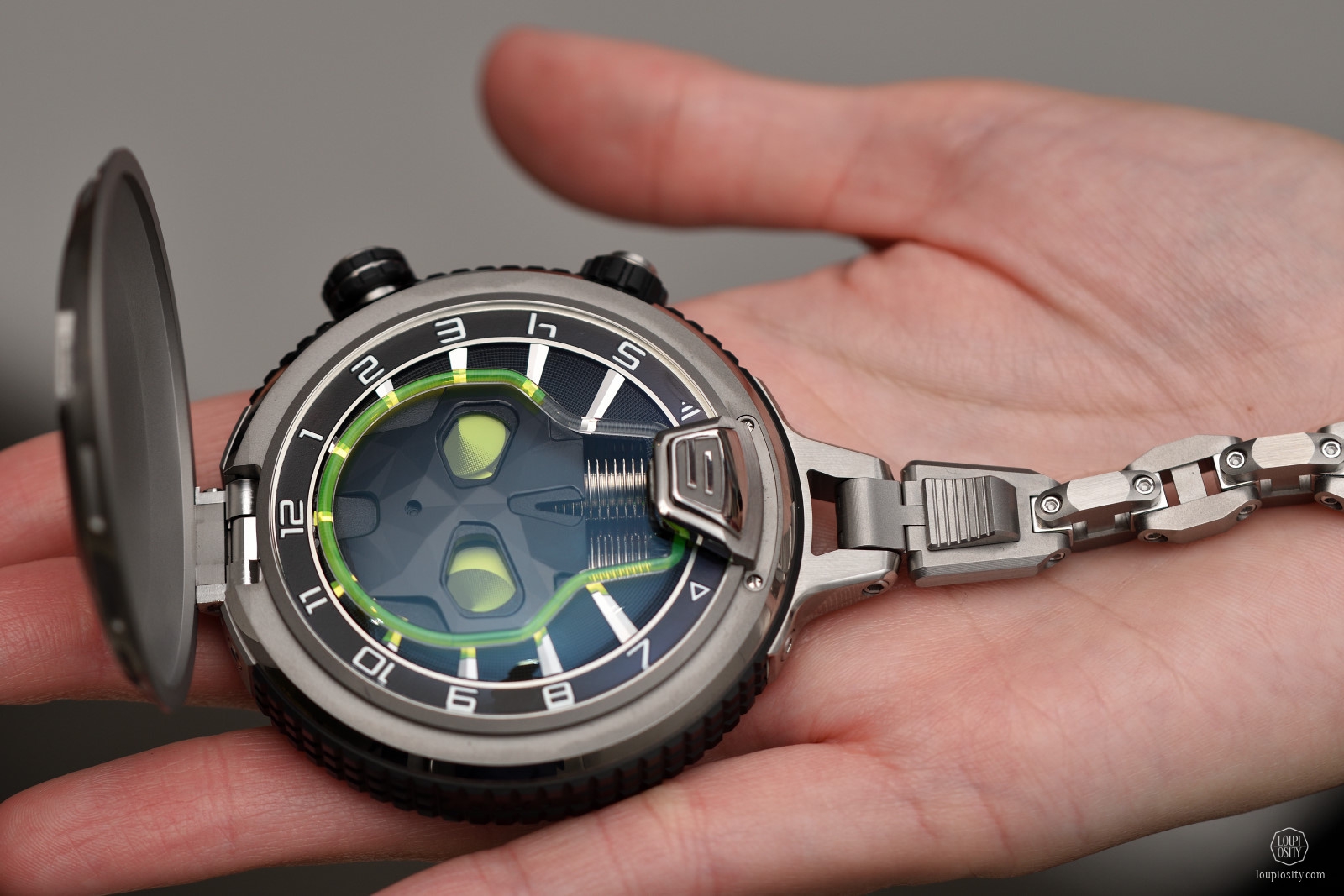 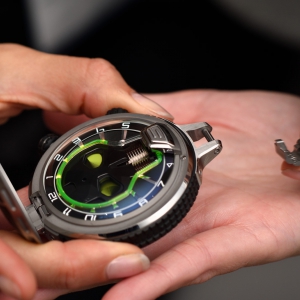 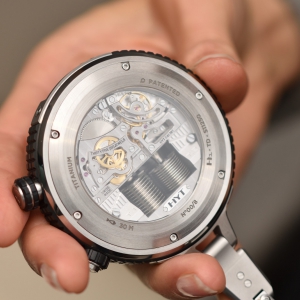 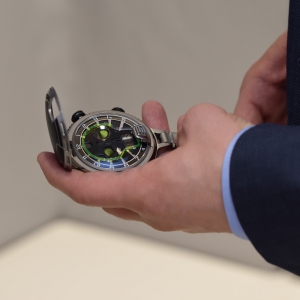 Betty Catroux, Yves Saint Laurent - Feminine Singular This March the Musée Yves Saint Laurent Paris devotes a special exhibition to Betty Catroux, fashion icon and Yves Saint Laurent’s ‘female double.’ The pieces displayed at the exhibition come from a major donation Betty Catroux has made to the Fondation Pierre Bergé.Vacheron Constantin - Métiers d'Art Tribute to great… Vacheron Constantin presented a number of novelties under the motto ‘Classic With a Twist’ at the Watches & Wonders 2021. New Métiers D’Art creations have also seen the light with a discrete satellite time display as a twist.M.A.D.EDITION In June 2021 MB&F offered a special watch to its ‘Friends’, the M.A.D.1, under a different label, M.A.D.Edition. The appearance of the watch on social media stirred the water of the mechanical watchmaking.