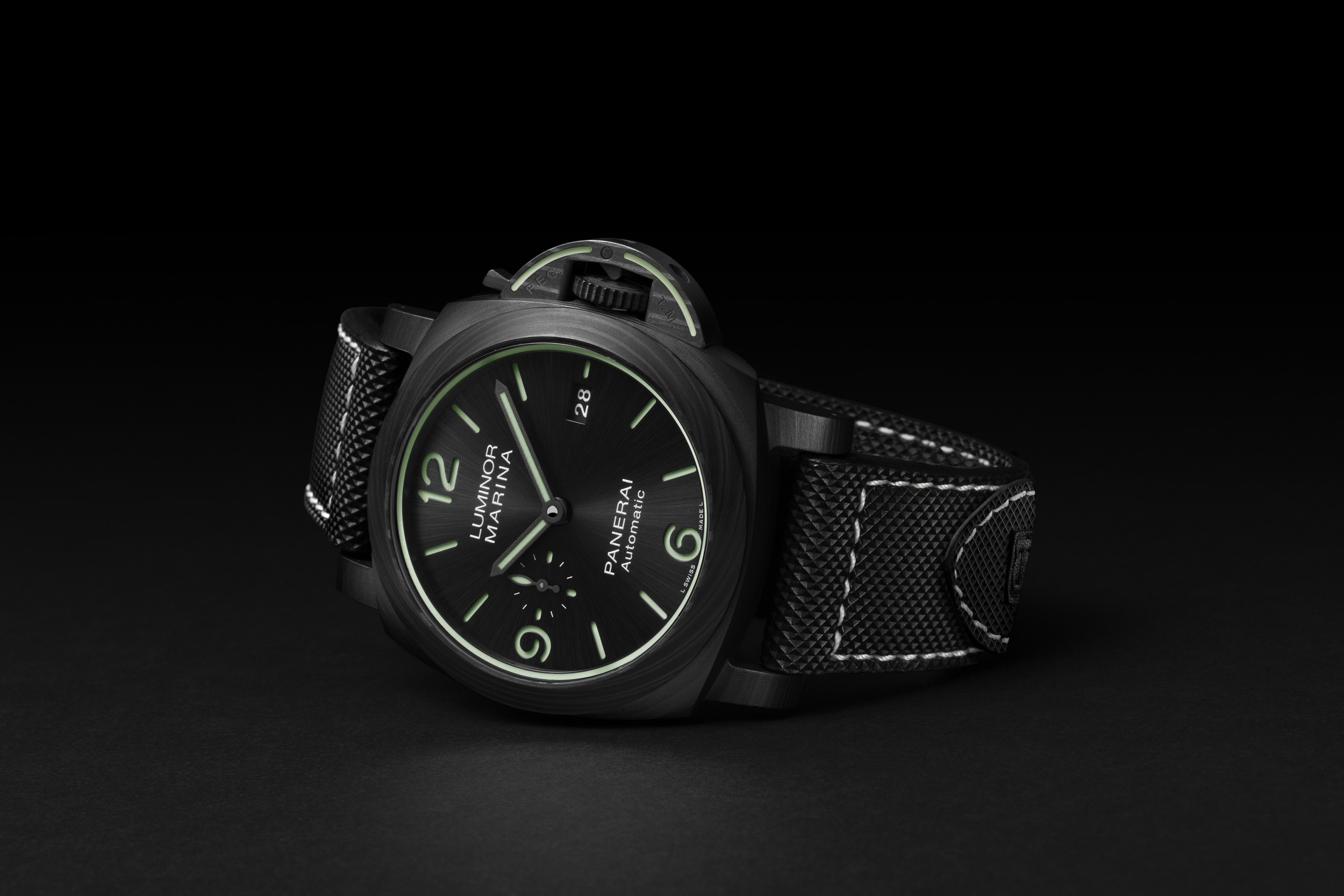 Getting to know a Panerai novelty via press images is something like getting to know someone though Tinder. There is a good chance that the subject shows a different face than in reality – in Panerai’s case the meeting offers a positive surprise. Due to the pandemic, the Watches and Wonders 2020 happened on 25 April in the digital space only, which pushed out the time until we can touch and feel the novelties. In the meantime, let us browse the new catalogue together.

Panerai patented the radium-based paste in 1916. This, together with the genuine design provided the key attributes to the 1936 Radiomir prototype, intended for the frogman commandos of the First Submarine Group Command of the Royal Italian Navy. The well-known cushion-shaped Radiomir case appeared in 1940. In 1949, Panerai introduced the tritium-based (a hydrogen isotope) luminous substance Luminor and the luminescent numerals and indices found themselves in a similarly named evolved case with the famous crown-protecting bridge in 1950.

Panerai celebrates the Luminor substance and the 70-year old case design in 2020. With the exception of the Submersible, all presented models at the WW2020 are from the Luminor collection.

The luminescent stripes (latest generation Super-LumiNova™ X1) not only appear on the dial and hands as normally, but run over the contours of the Luminor Marina – 44 mm, shimmering on the profile of the watch in the dark. It is there around the circumference of the dial, on the crown-protecting bridge and even the stitching on the strap it is glowing. The model comes in three colour versions: blue with a titanium case (PAM01117), black with a Carbotech case (PAM01118) and anthracite with a Fibratech case (PAM01119). 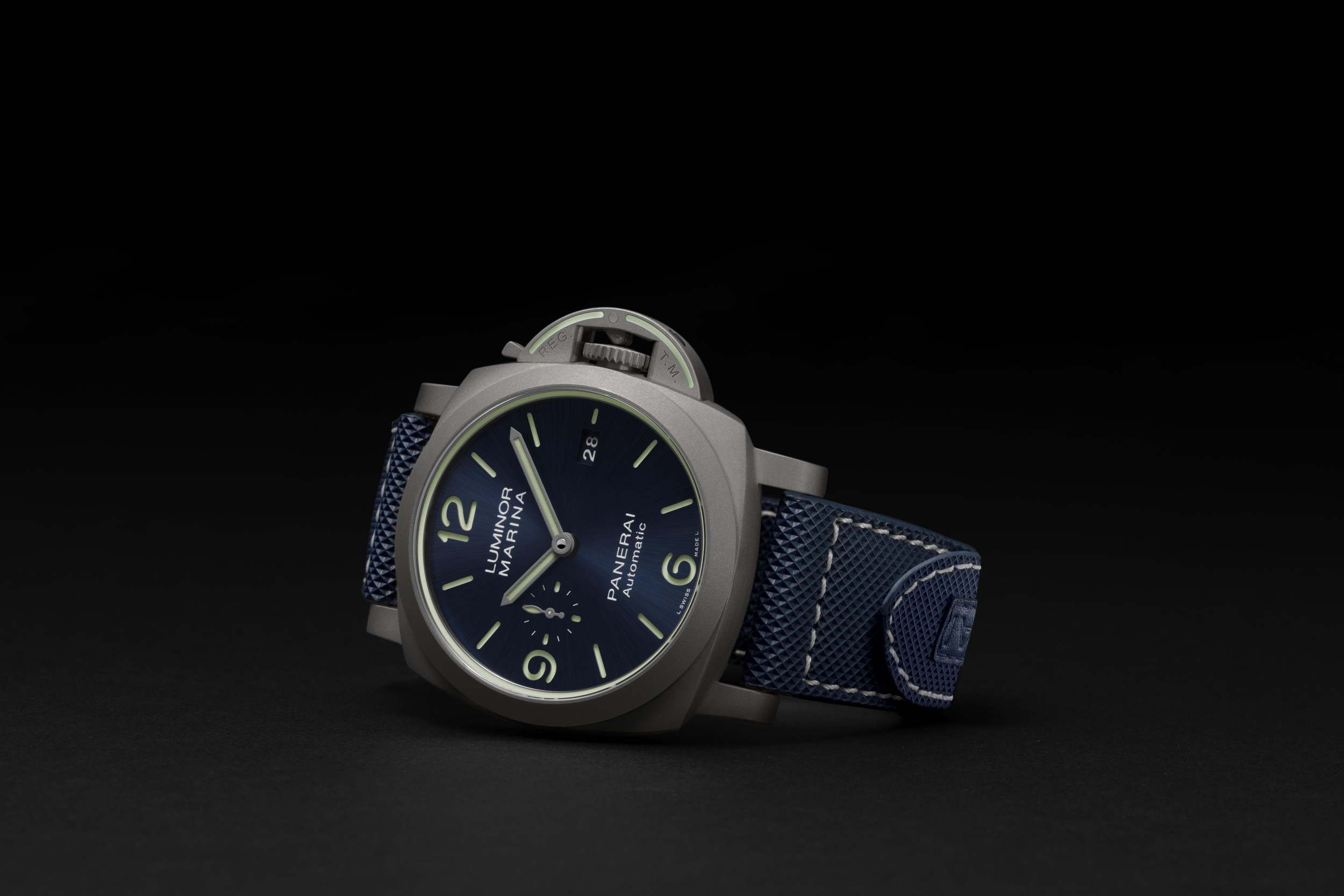 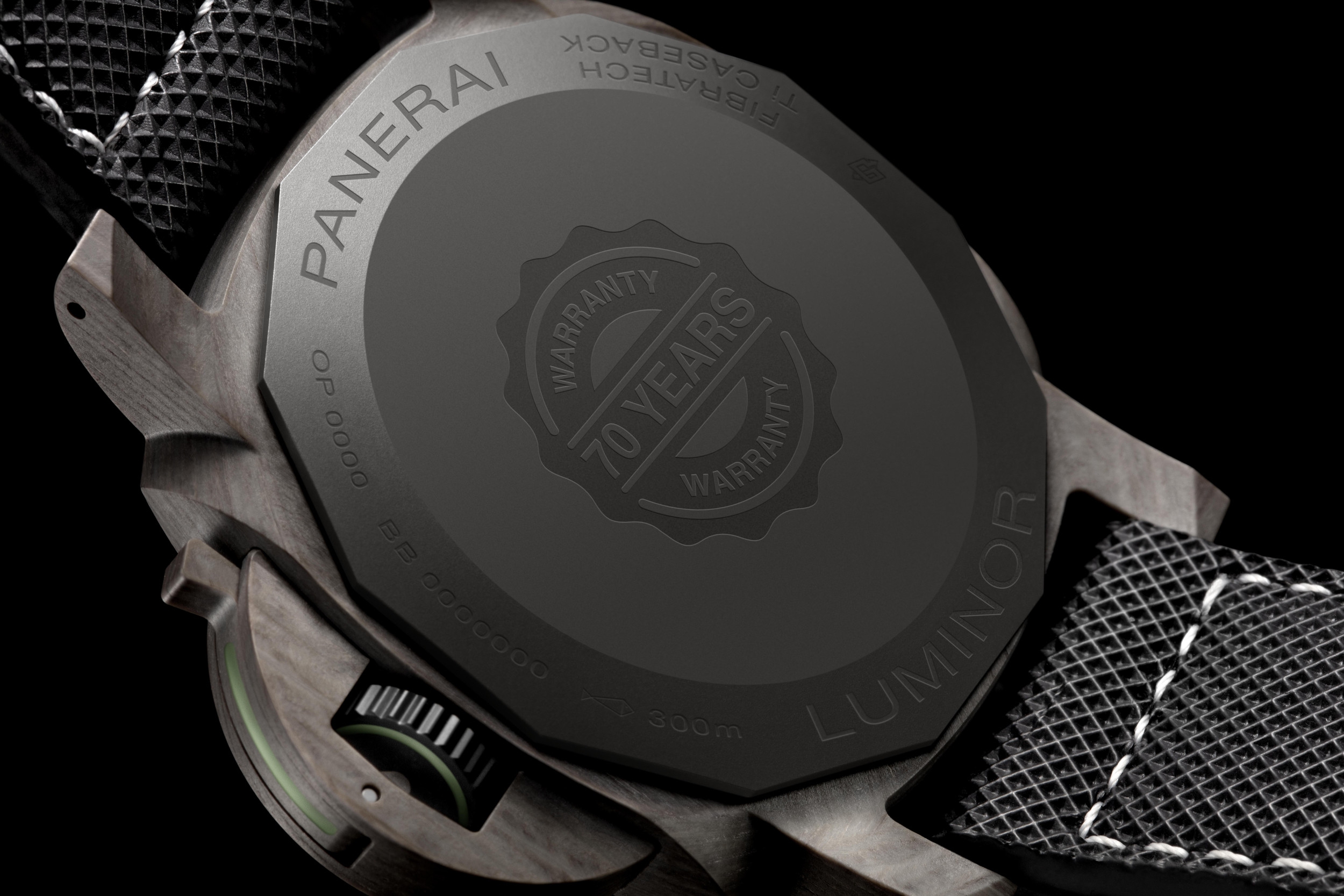 The case of the blue version is made by Direct Metal Laser Sintering (DMLS) 3D printing technique using titanium powder (see below). Therefore it ends up with a very light overall body – the whole watch is just 100g together with the strap.

The Carbotech™ version is made of thin layers of carbon fibres superimposed on each other, orientated alternately.

With the anthracite version the company is introducing a new material in its timepieces: Fibratech™. It is made from unidirectional mineral fibres produced by the fusion of basalt rock; these fibres, bonded with polymers, become thin layers which are superimposed in a precise orientation and then consolidated through pressure and high temperature. The process lends advantageous properties to the case: it is 60% lighter than steel, resilient and highly resistant to corrosion.

The 70-year anniversary Luminor models also come with 70 years of international warranty and can only be purchased in Panerai boutiques. 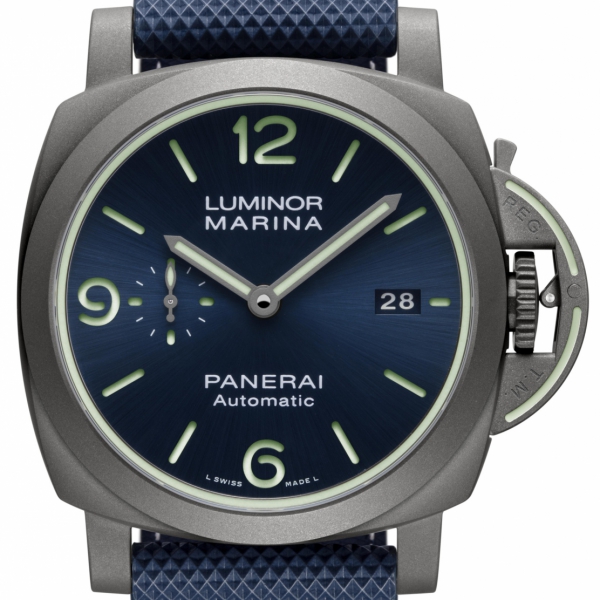 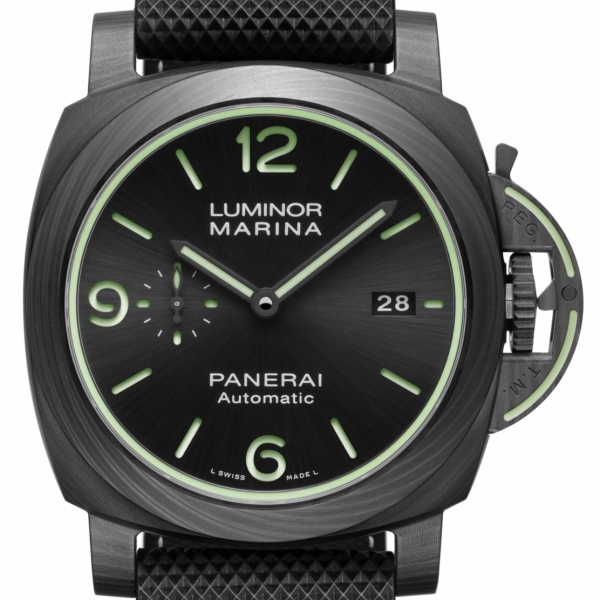 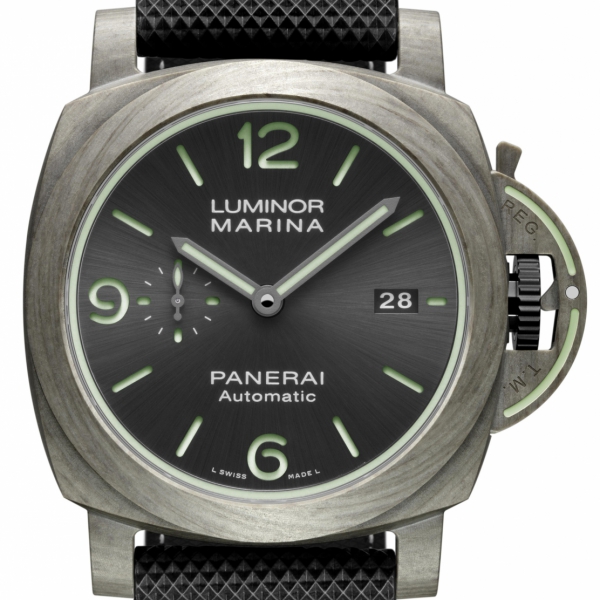 The brand has been among the first in the watchmaking sector to use 3D printing in production. In 2016 Panerai presented the titanium 3D printed 150-piece limited Lo Scienziato or ’The Scientist’ – Luminor 1950 Tourbillon GMT Titanio, Special Edition, which was followed by the Panerai Lo Scienziato in series production, in 2018.

Read more about the watches here and about the 3D printing technique here.

For 2020, Panerai designed a cold technical model emphasising the properties of the two high-tech materials – 3D printed titanium and Carbotech. Even the Super-LumiNova™ in the anthracite sandwich dial is grey in normal daylight conditions – it releases a green glow in the dark.

The movement is the Caliber P.9010 described above and designed and built by Panerai in Neuchâtel. 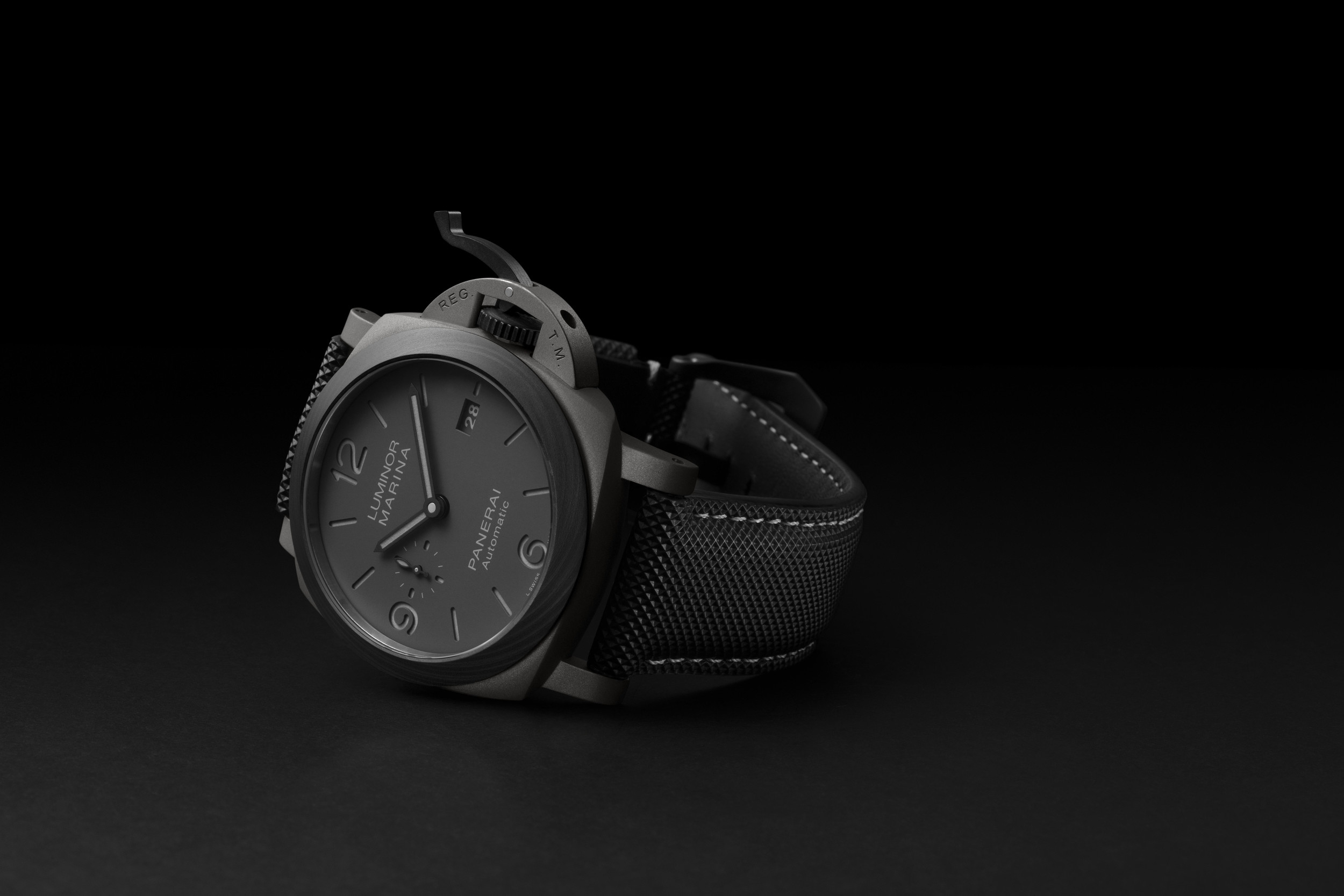 PET bottles made up the threads of the Submersible’s soft strap the company showcased last year in collaboration with its ambassador – the explorer Mike Horn. He has been a long-time partner of the Swiss watch company (along with Mercedes-Benz and Geberit) and the new owners of the 19 limited pieces received a one-off experience by spending a few days of intensive training with Mike among the ice floes of the Arctic.

Mike Horn was born in Johannesburg in 1966. He studied Human Movement Science at Stellenbosch University in Western Cape, South Africa, and then he moved to Switzerland in his mid-twenties. He has undertaken multiple solo journeys including an 18 months journey around the equator called ‘Latitude Zero’, a 20,000 kms and 27 month voyage around the Arctic Circle with boat, kayak, ski kite and on foot dubbed ‘Arktos’ or a 6-month crossing of the South American continent from the Pacific Ocean to the Atlantic.

With the Norwegian polar explorer Børge Ousland he completed a journey from Cape Artichesky, Russia to the North Pole in the full Arctic night between January and March 2006. In 2007, Mike Horn launched the Young Explorers Program with a purpose built explorer boat Pangaea. In the next five years they did 12 education and conservation journeys at various locations on the Earth with 100 Young Explorers to raise awareness for the fragility of the planet while living up to his motto: Explore, Learn and Act.

This year, the wrist metal manifestation of the partnership became a skeletonized Submersible with Arctic blue accents and a case that originates interestingly from Mike’s ship Pangea. EcoPangaea™ as they call this high-tech steel is composed of recycled and purified metal from the 35-meter drive shaft of the Pangea. Besides the rubber strap it comes with a recycled PET strap too.

The hand-wound P.2005/T calibre stores the energy for 6 days on three barrels and has a 30-second tourbillon visible at 10:30.

Only 5 pieces will be produced, the owners of which can enjoy discovering their limitations in the Arctic together with Mike. 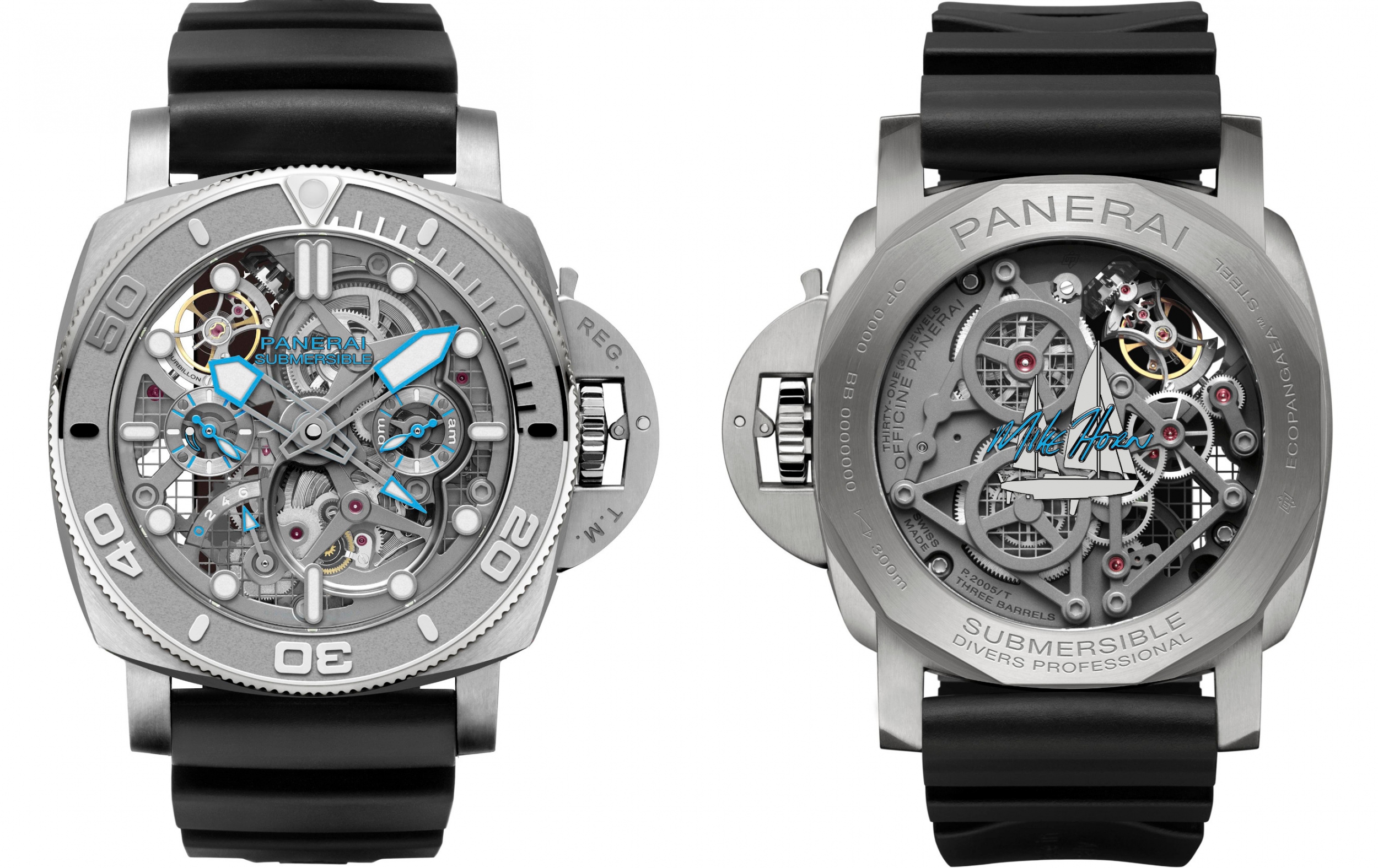 Photo credits: Officine Panerai
All registered trademarks are property of their respective owners.
All rights reserved.

IWC Schaffhausen at Watches & Wonders Shanghai IWC Schaffhausen Portugieser Chronograph was released at Watches and Wonders Shanghai with steel bracelet.Panerai at Watches and Wonders 2021 At this year’s Watches and Wonders Panerai presented new Luminor and Submersible timepieces and with their new IOC-UNESCO cooperation the Neuchâtel-based manufacture reinforces its commitment to a sustainable environment and a healthy ocean.Greubel Forsey - Balancier S Greubel Forsey unveils the new Balancier S featuring a large, high precision and inclined balance wheel within a water resistant titanium case tailored for the most active lifestyle.