Officine Panerai novelties and experiences in 2019 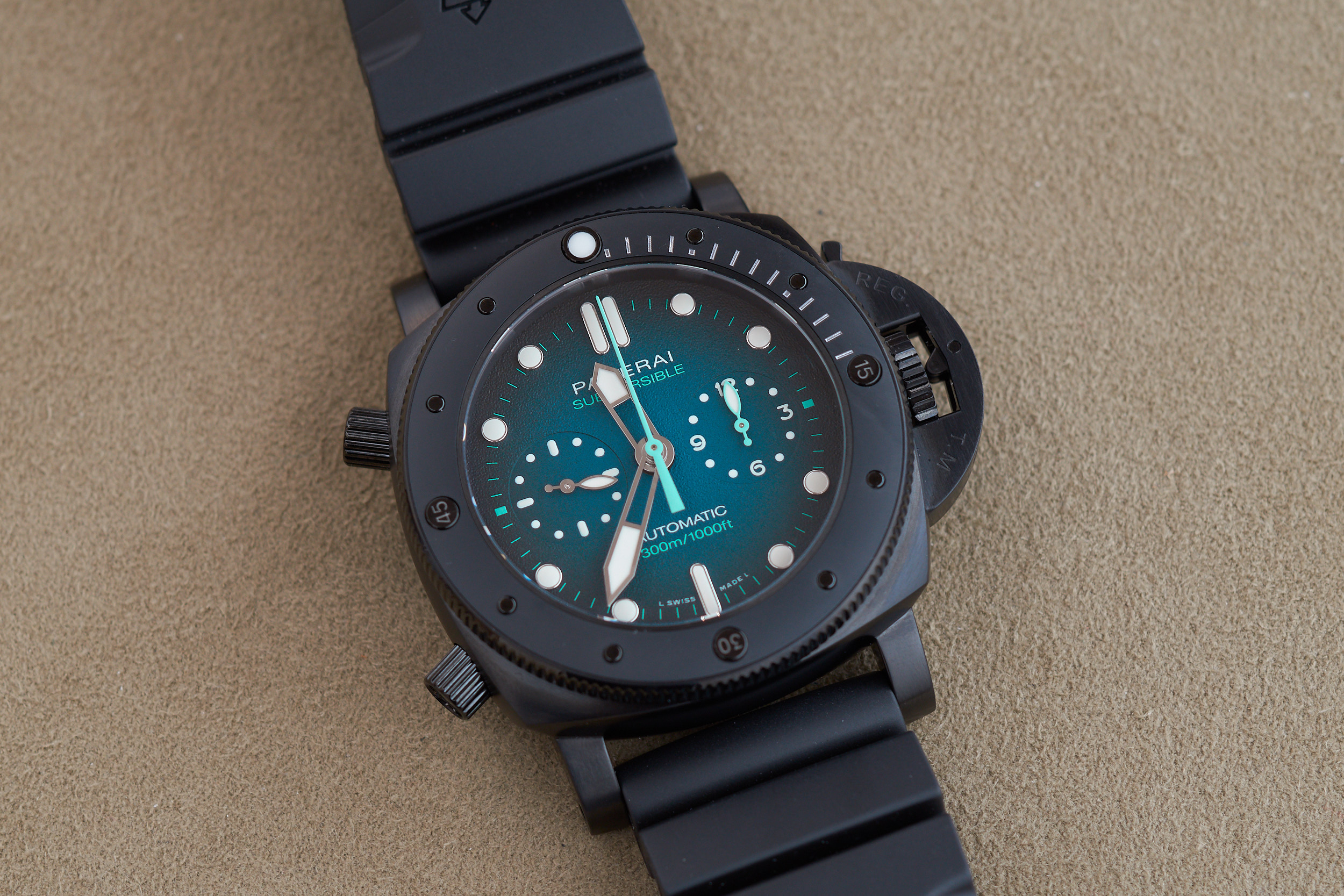 Officine Panerai showed us remarkable new additions to the Submersible line at the SIHH 2019. The general editions were extended with special pieces, which come with unique experiences way beyond watchmaking.

In the chilly Geneva January my feet were desperately missing the warm wood of Officine Panerai’s beautiful Bermudan ketch, the Eilean. I stepped on her deck in Venice during the Homo Faber handcraft exhibition last September when the sun was still high up in the sky. The boat, breathed a new life into by Panerai, has been a testament of the brand’s close bind to the sea. Interestingly, the responsibility for restoring the outstanding messengers of the past came from a company that uses the high-tech of the future in watchmaking. They utilise all kinds of new materials and have put processes like 3D printing into production with the Lo Scienziato among the first ones. Panerai has been successfully reinterpreting the same handsome cushion shape since 1936 with the combination of colours and materials that looks silly on other watches but makes Panerai a must have. I bow down to the designers who touch hues with such a sure hand. No wonder that the brand can evoke emotions that is hard to beat.

Raising the emotions and delivering new experiences to customers is at the centre of Jean-Marc Pontroué’s strategy, who became CEO in April 2018. The 2019 models and especially the full packages that come with the limited editions move Panerai one step closer to being a whole lot more than just an ordinary watch brand.

Let’s stay above the surface for a while. The Eilean never meant to compete, although it ran in Panerai’s own Classic Yachts Challenge series multiple times. The company sponsored the 35th Americas Cup in 2017 along with two teams: the Oracle Team USA and the Softbank Team Japan. At a talk in the Auditorium of SIHH 2019, Jean-Marc Pontroué announced their partnership with Luna Rossa Sailing Team led by Massimiliano “Max” Sirena. 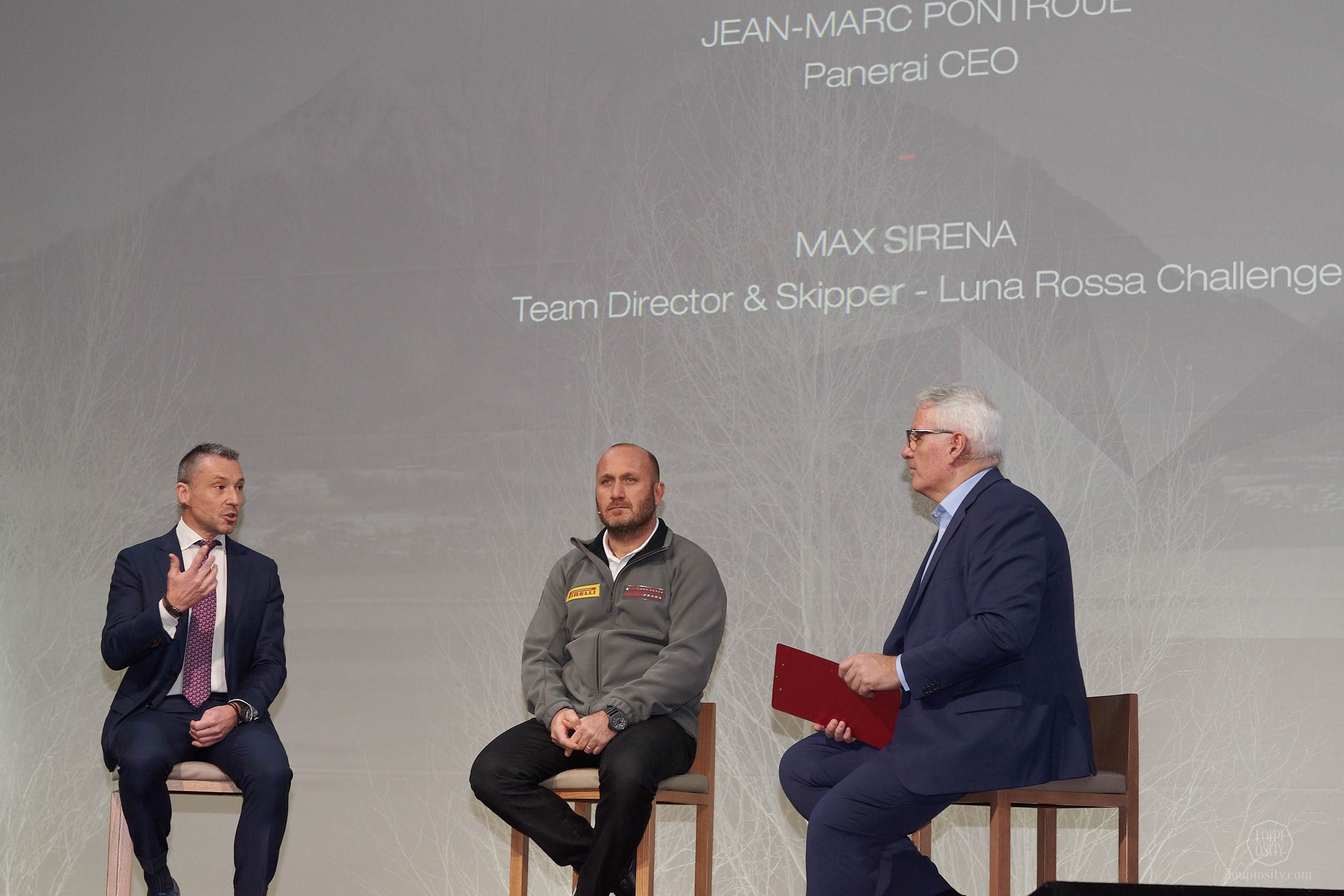 The Luna Rossa Team was established by Patrizio Bertelli, CEO of the Prada Group in 1997. The first challenge they did was at the 30th Americas Cup in 2000 under the name “Prada Challenge for America’s Cup 2000”. Luna Rossa launched its sixth challenge since it’s inception, for the 36th Americas Cup. Scheduled for March 2021 in Auckland, NZ where the Defender Emirates Team New Zealand will meet the victorious challenger. Challengers will battle in multiple series until then: 2 racing events in the America’s Cup World Series in 2019 and 3 events in 2020 followed by the Christmas race the same year and the Prada Cup, the final of the Challenger’s Selection Series in January-February of 2021.

Panerai and the Luna Rossa team signed the sponsorship agreement for the 36th Americas Cup. Under the aegis of the cooperation, Panerai will present new Luna Rossa editions every year until 2021. You can watch the SIHH Auditorium discussion here.

This year the Panerai Submersible Luna Rossa sailed into Geneva with a special dial made of the actual sail of the racing boat. The grey threaded dial shouted for a high-tech carbon fibre case. The material that is also there in the AC75 monohull is called carbotech. 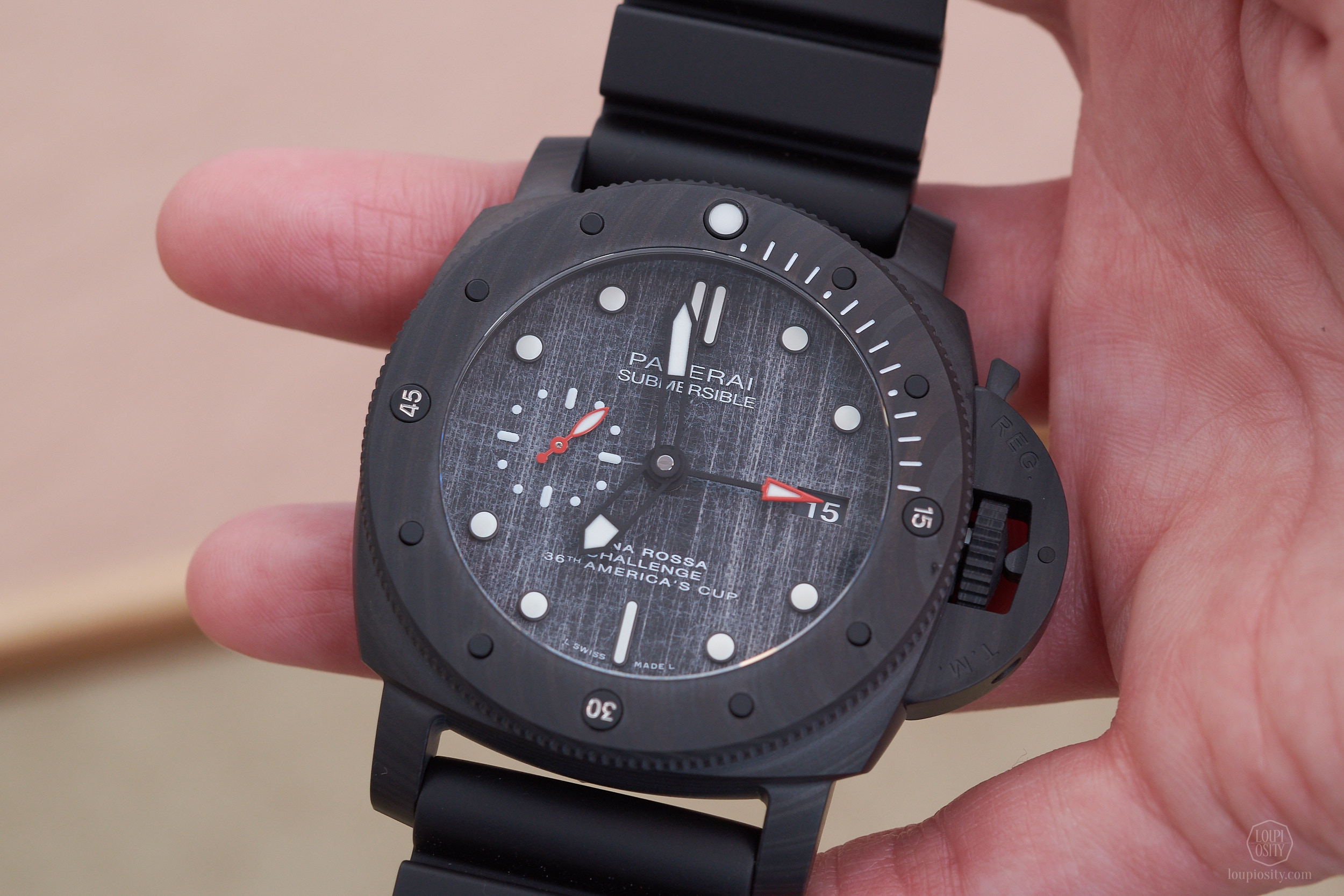 “The AC 75 will be an extremely high-performance yacht, challenging to sail, who will require an athletic and very talented crew. Every crew member will have a key role both in the manoeuvres and in racing the boat; the tight crossings and the circling in the pre-starts – which are part of the America’s Cup tradition – will be back on show, but at significant higher speeds.”

The watch’s 47mm case is very light and extremely resistant to shocks and scratches. Inside is the automatic in-house P.9010/GMT calibre with a power reserve of 72 hours.

The next three watch models emerged in a general and a thematic special edition. And what makes these special? Not just how they look, but how they are handed over… 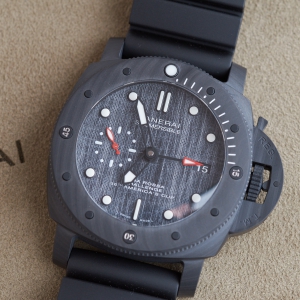 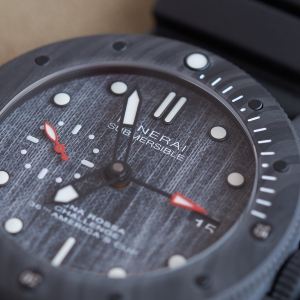 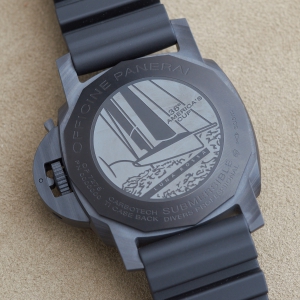 Guillaume Néry is a free-diver from Nice, France who became famous for his incredible deep diving performances. He dives using the force of his fins alone to 125m below the surface and has created entertaining underwater films of his submersions.

Panerai issued a new Submersible Chrono with him with an awesome ‘shark grey’ dial. It is not just the grey, but how it harmonises with all the other colours that makes it sexy. The case is 47mm titanium, just like the bezel, which is set with a blue ceramic disc. The hands are in a different, lighter shade of blue, which works so well with the textured ‘shark grey’ dial. 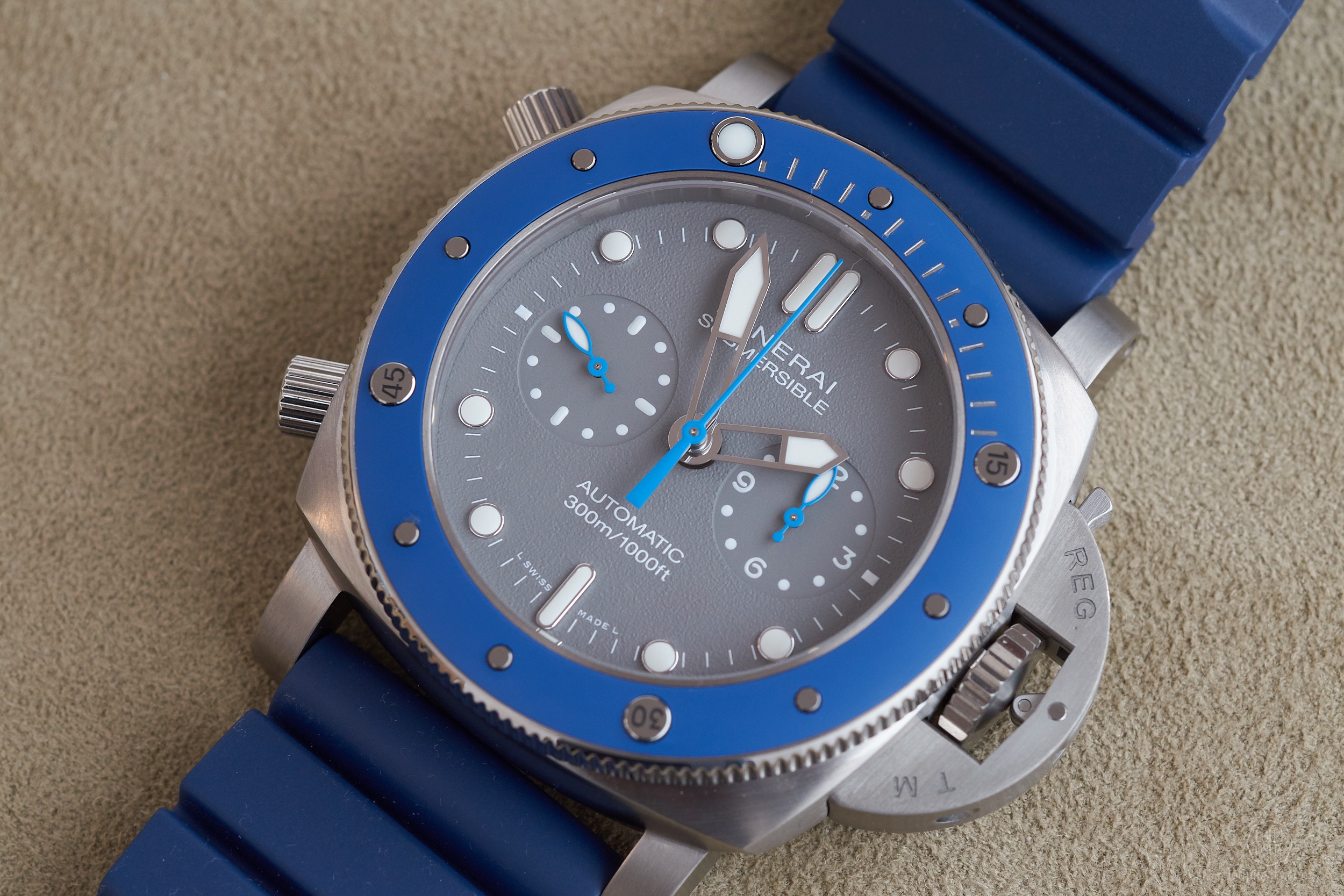 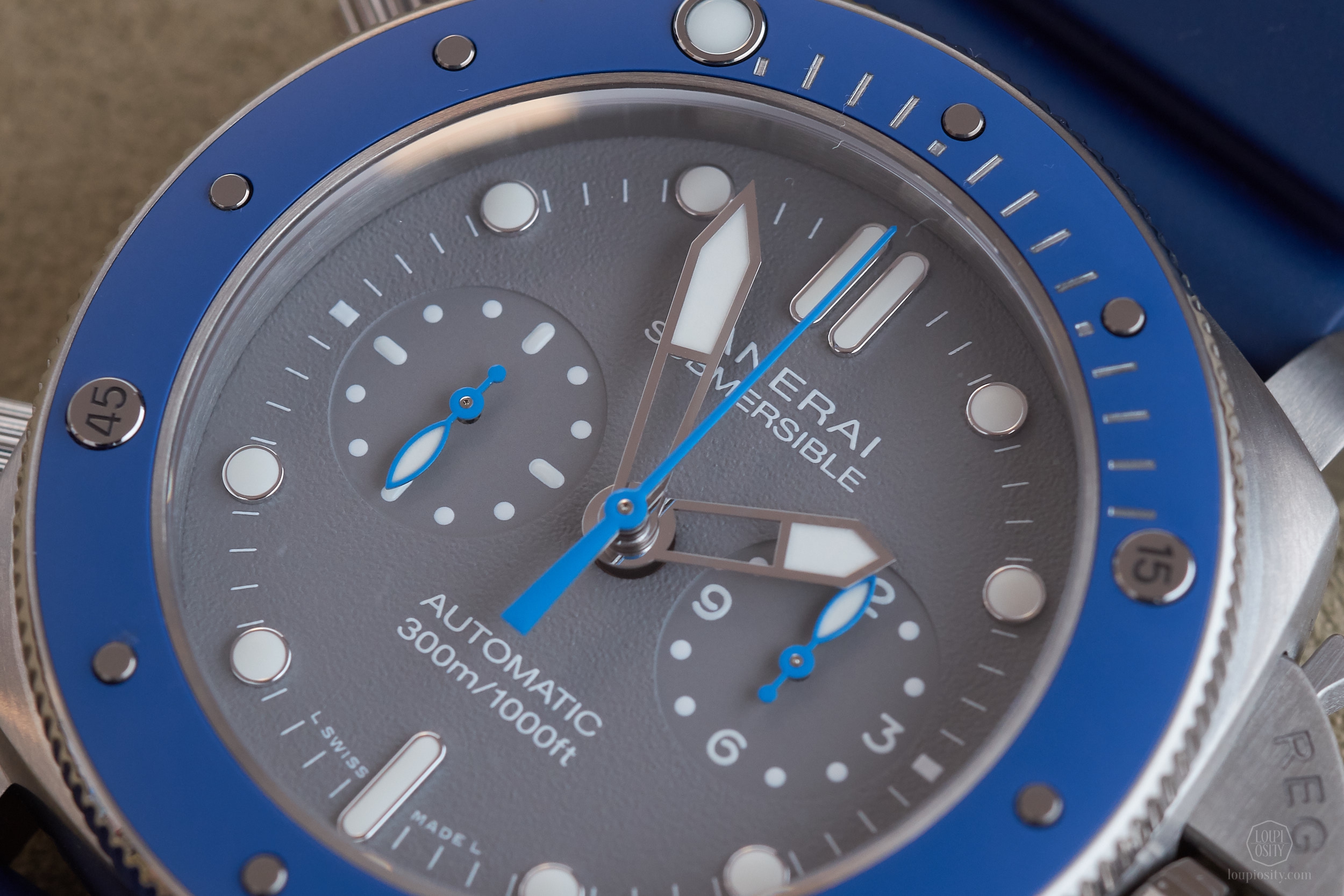 Besides the general model, Panerai presented 15 pieces in a dark blue and black combination, reminiscent of the deepest underwater holes Guillaume is diving into. The titanium case on this version is treated with DLC coating for a more dramatic effect. Those who acquire this new Panerai creation will have the opportunity to participate in an exclusive experience: they will be invited to Moorea, in French Polynesia, where Guillaume Néry lives, to dive with him and the whales. 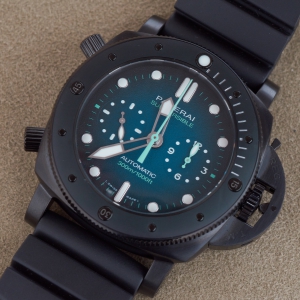 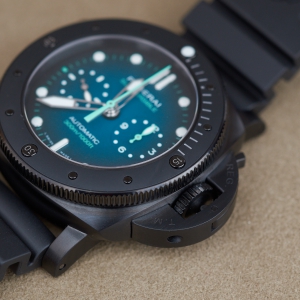 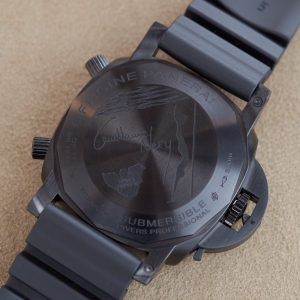 During the presentation Panerai emphasised that they take environmental issues seriously. They are committed to zero-carbon emission, which was a key designing criterion in their facilities in Neuchâtel. Additionally, engineers have been looking for ways to use recycled materials for cases, straps and the packaging. Panerai partnered with the explorer Mike Horn for an eco-watch that was created from recycled EcoTitanium™ and a strap made of recycled PET. There, PET bottles make up the threads of one strap, which has a surprisingly nice soft touch. 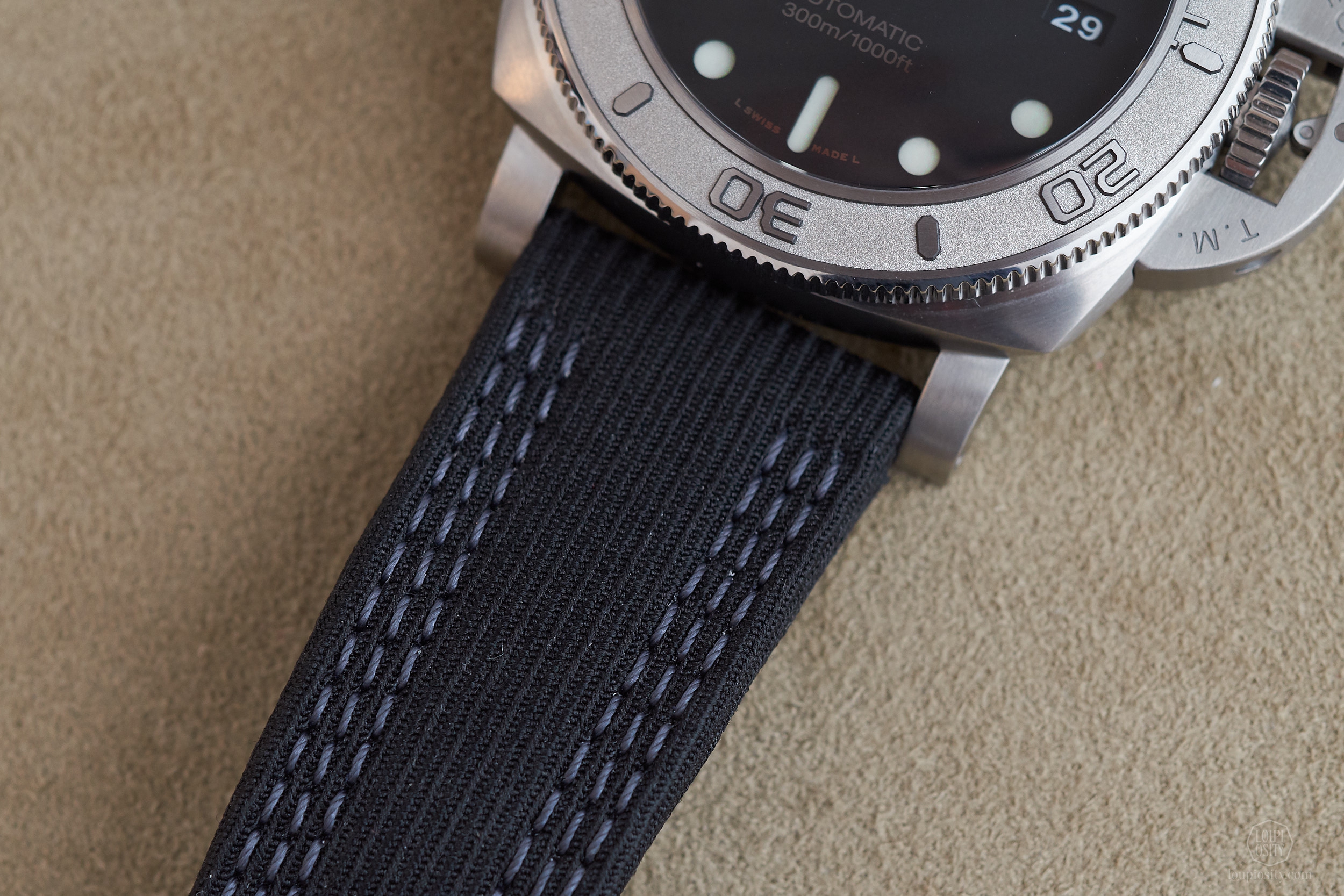 The watch is equipped with the P. 9010 automatic calibre providing time and date functions for 72 hours continuously.

19 special pieces have blue luminous markers instead of the green and a blue strap replacing the black. The customers of this small batch will be offered to experience a few days of intensive training with Mike among the ice floes of the Arctic. During the trip with Mike Horn they can face their limitations under the extreme conditions and see how rapid the climate changing processes are, first hand. 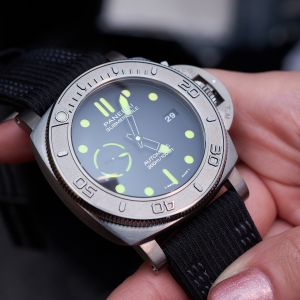 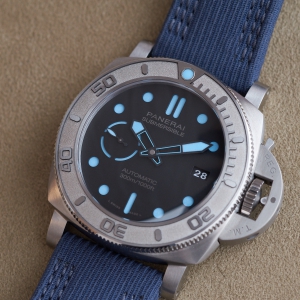 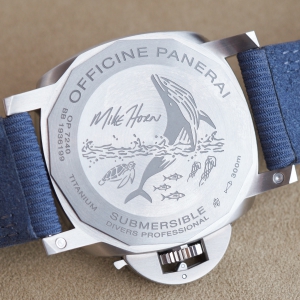 For decades, the Italian Navy had Panerai instruments on their missions. In 2019, Panerai introduced a navy inspired new black carbotech Submersible timepiece with the same P.9010 calibre. The dial echoes the same colour with a camouflage pattern. The dots and indexes are not just paints on appliqués, but they are solid cubes of luminous material providing it even better legibility.

The special 33 pieces are dedicated to the Comsubin, the Diving and Commando Group of the Italian Navy. Instead of the white accents, these have navy green luminous dots and markers. The strap was also replaced for a similar green. I’m not sure if it’s a reward or punishment, but the customers of these 33 pieces are offered a training session with Comsubin. Either way, please let us know how it was, if you survived. 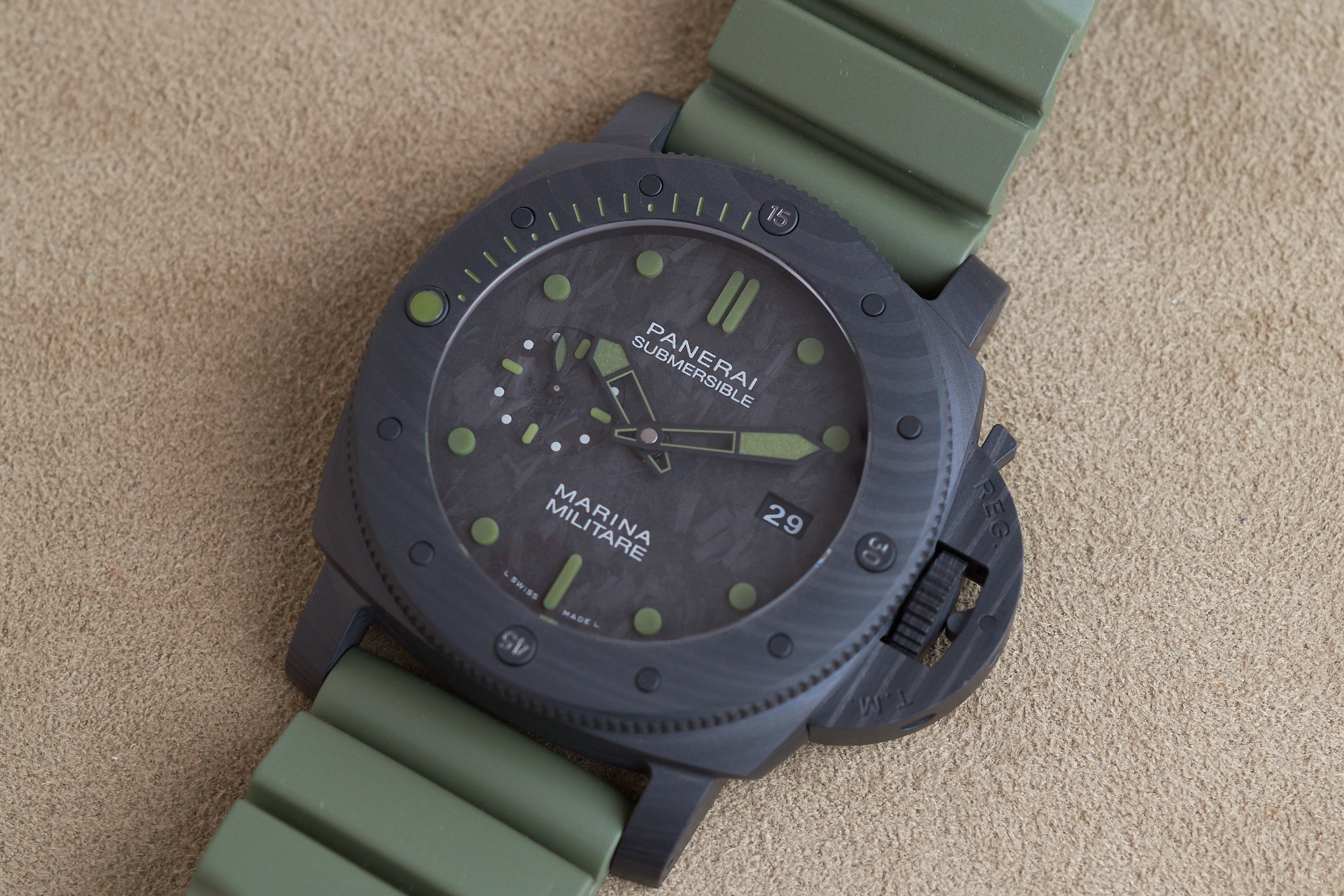 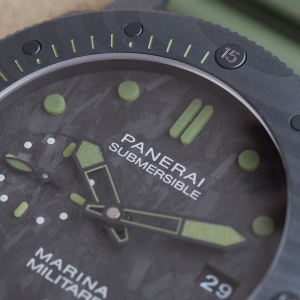 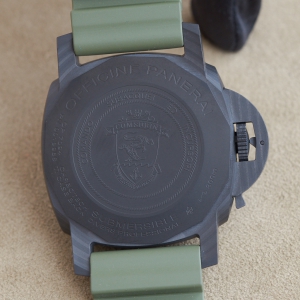