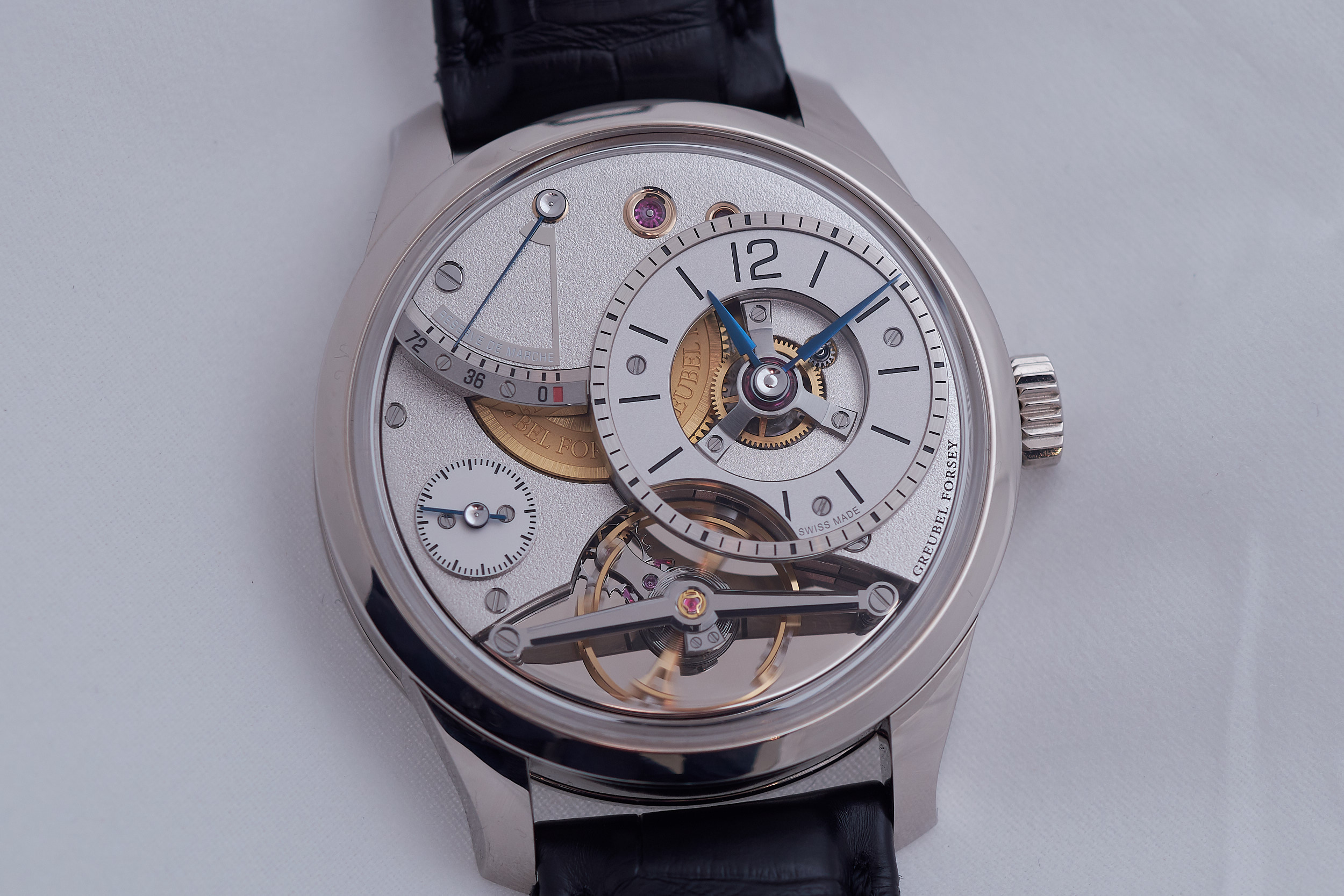 With the Art Piece Edition Historique Greubel Forsey closes the collection that explicitly proclaimed Greubel Forsey’s view of watchmaking being a form of art and self-expression. We admired the final edition and the surprisingly small Balancier Contemporain with its large balance wheel at the SIHH 2019.

#watchart is quite a popular hashtag on Instagram. Yet, compared to most watches tagged this way Greubel Forsey sets a standard that is hard to achieve. Robert Greubel’s and Stephen Forsey’s pickiness for quality and their creative freedom are probably challenging to comprehend and live with to ordinary humans. So whoever works in the marvellous building half-sunk in the ground in La Chaux-de-Fonds, has accepted and share their relentless operating model.

With the Art Piece collection, the duo set out to raise a memorial to their motto: ‘Art of Invention’. The line includes watches that are barely imaginable to have come alive under other brands. With the closure of this chapter, let us recall the individual models and show you the final Art Piece Edition Historique.

The first Art Piece was co-created with British nano-sculptor Willard Wigan during a 5-year process. His sculptures are so small that they fit in the eye of a needle or on the head of a pin. Mr Wigan created a miniature figurine situated inside the movement this time, which can be admired through a specially designed optical system that magnifies it 20 times.

Robert Greubel and Stephen Forsey described the road taken with Wigan and fellow engineers and scientists from different universities as very long. Finally, ‘we created a symbiosis of our respective creative universes’ – they noted.

The next Art Piece paid tribute to the extraordinary artist, Robert Filliou.

Robert Filliou (1926 – 1987) was one of the most radical French artists of the second half of the twentieth century, well-known as a Fluxus artist. Fluxus is an international avant-garde collective of artists and composers founded in the1960s by the Lithuanian/American artist George Maciunas. As Tate Gallery describes: ‘Artists used a range of media and processes adopting a “do-it-yourself” attitude to creative activity, often staging random performances and using whatever materials were at hand to make art.’

The dial is stamped with the principle of equivalence so dear to Filliou – ‘well made, badly made, not made’ (bien fait, mal fait, pas fait). The back of the watch is engraved with the silhouette profiles of those involved in the project.

Referencing one of the artworks by Filliou, the timepiece includes a miniature sculpture of a hat with cards by Willard Wigan.

This one is similar to the Filliou piece. Just like that, it hides the time display which can be revealed by the pusher at 4 o’clock. On the bronze front there is a ‘stamp seal of approval’. The Art Piece 2 contains a teeny-tiny engraving of Greubel Forsey’s first invention, the Double Tourbillon 30º magnified by the optical system.

This was the first Art Piece without a micro sculpture or engraving, presented in 2017. Greubel Forsey’s signature Double Tourbillon 30° plays a central role on the dial together with the power reserve indicator. The latter was given an emphasis greater than the actual time, which again can only be seen by pressing the button below the crown. 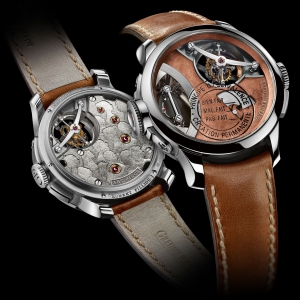 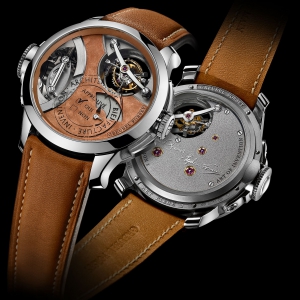 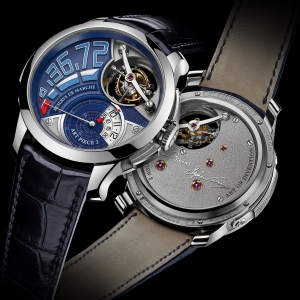 At the SIHH 2019 the Art Piece Edition Historique was presented. Following on from the previous Art Pieces, it received a new 475-part hand-wound movement with a variation around the theme of the Double Tourbillon 30°.

Displaying time is once again not the main point here. Hours are discretely shown by a red triangle circling in the forest of engravings. Minutes appear on request in the aperture. This section reminds me slightly of the Aztec calendars. All the engravings of Greubel Forsey’s values are handmade.

The Double Tourbillon 30° is visible on both the dial side (on a royal blue carpet) as well as on the case-back through an opening. The 44mm Art Piece Edition Historique is released in a limited edition of 33 pieces, out of which the first 11 are made in platinum. 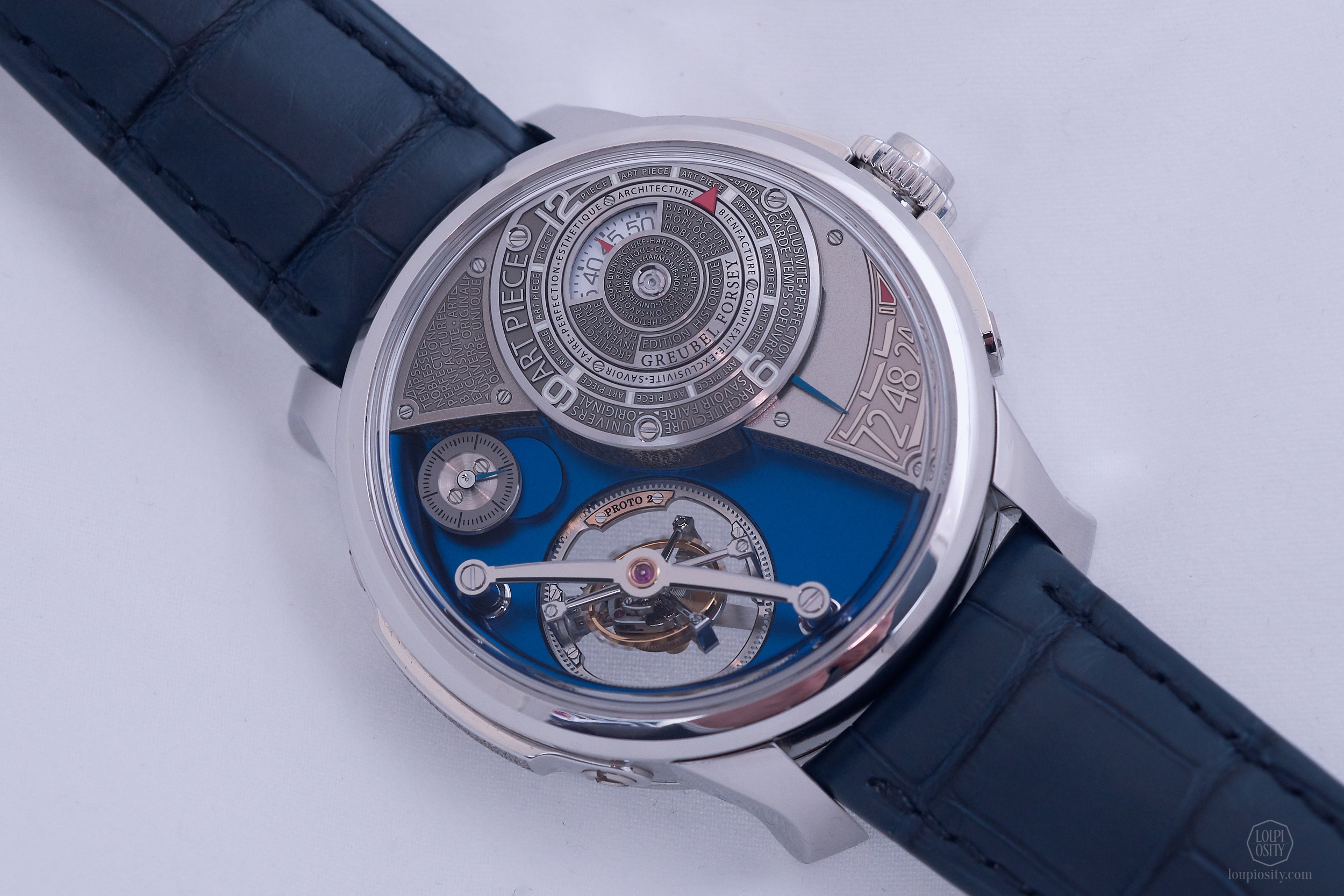 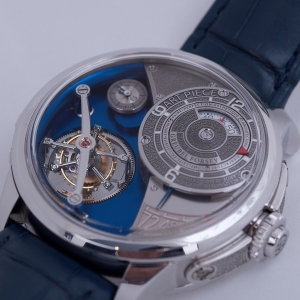 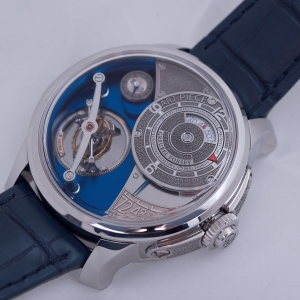 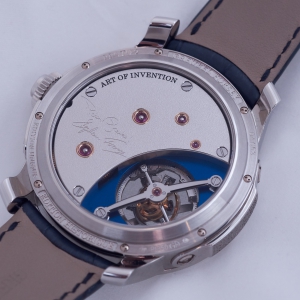 The magnificent balance wheel from the Signature 1 has looked back at me on the newly introduced Balancier Contemporain. The case is even smaller than the Signature 1’s (41.40 mm diameter) stretching to 39.60 mm, which makes the Balancier Contemporain the smallest Greubel Forsey watch today. Even though it’s just a 2 mm difference, the same balance wheel with its 12.60 mm diameter looks more profound in the new model. The organ beats fitted to a long black polished steel bridge over a mirror polished huge gold plate. The optical effect that highlights the dance of the golden wheel is breath-taking. The unbelievably perfect hand-polished surfaces are complemented with nickel silver, frosted and spotted bridges. 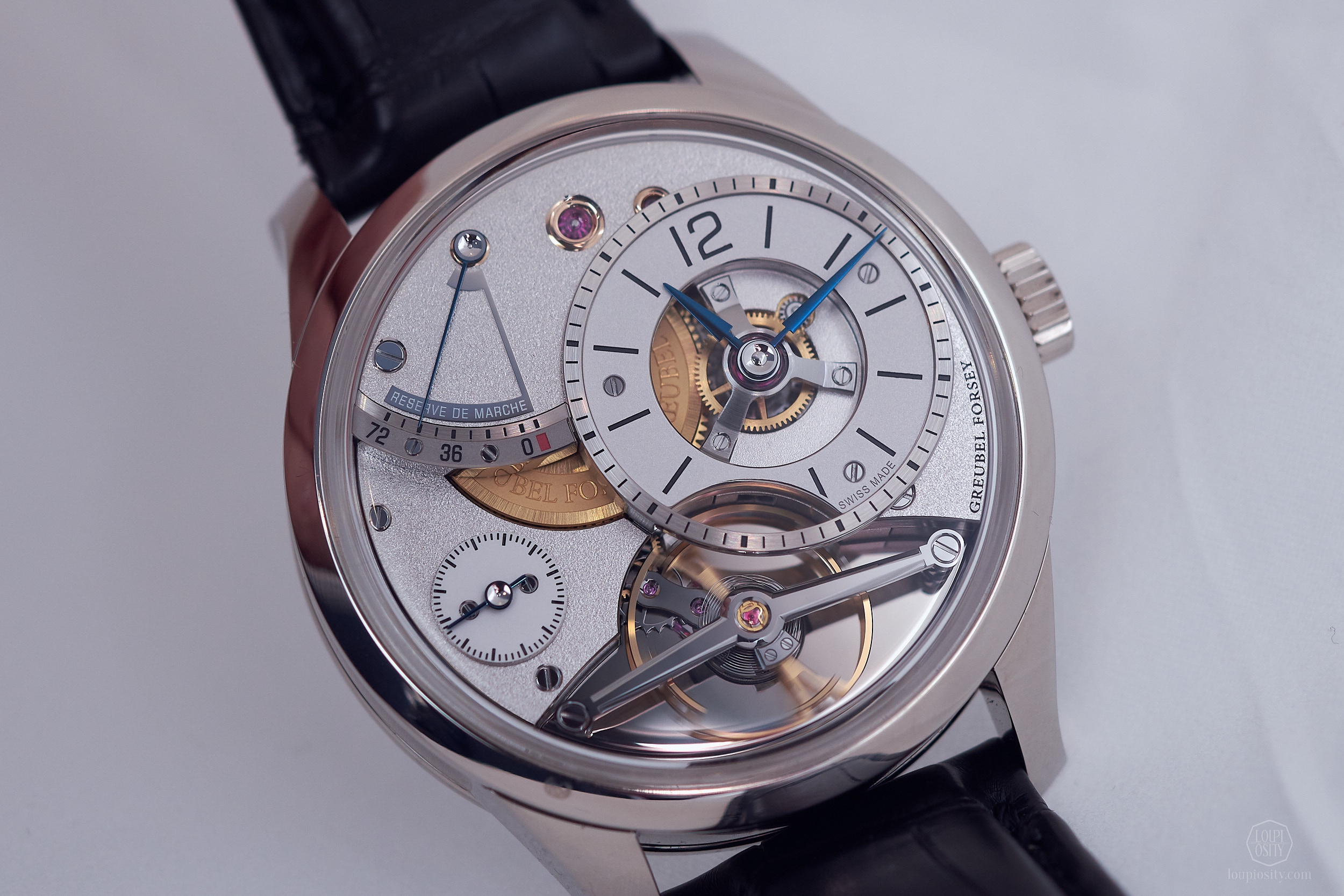 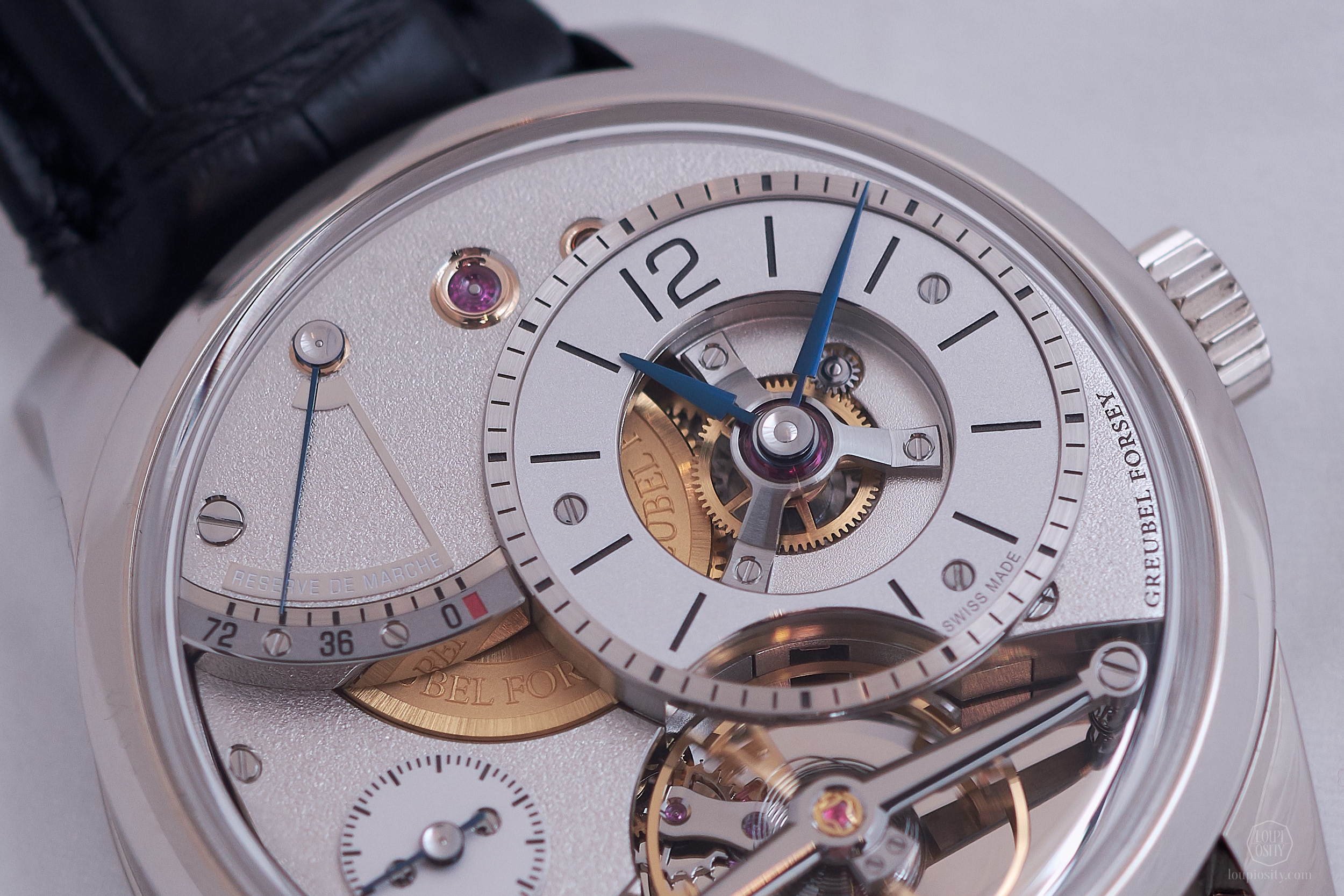 The blued hour and minute hands have a tripod stand arching over the golden hour wheel. To the left, the golden barrel is one of the two serially-coupled fast rotating mainspring barrels that are responsible for the 72 hours power reserve. The indication of the remaining energy is displayed at 10 o’clock.

The back holds Greubel Forsey’s signature tattoo deep in the white gold skin.

Not very common for Greubel Forsey, a gem-set Balancier Contemporain model was also shown. Baguette-cut Internally Flawless / D-E colour diamonds queue up on the case, the lugs, the crown and the bezel (232 baguette-cut diamonds / 9.58 ct in total). The dial has also been changed to a shimmering mother-of-pearl plate. In order to let them shine, the black polished insert behind the balance wheel was replaced by a nickel silver, frosted and spotted bridge. 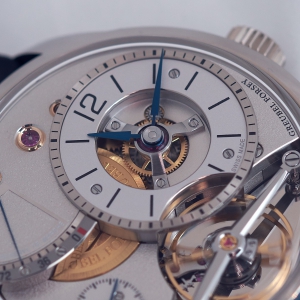 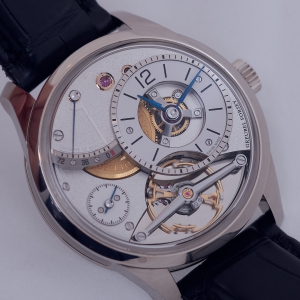 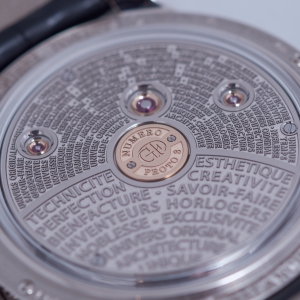 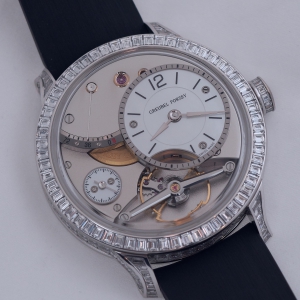 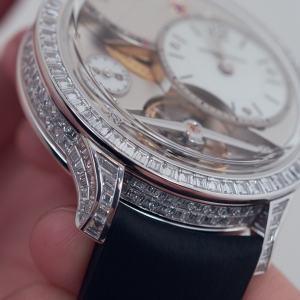 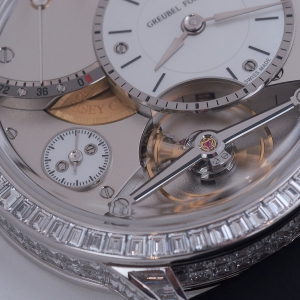