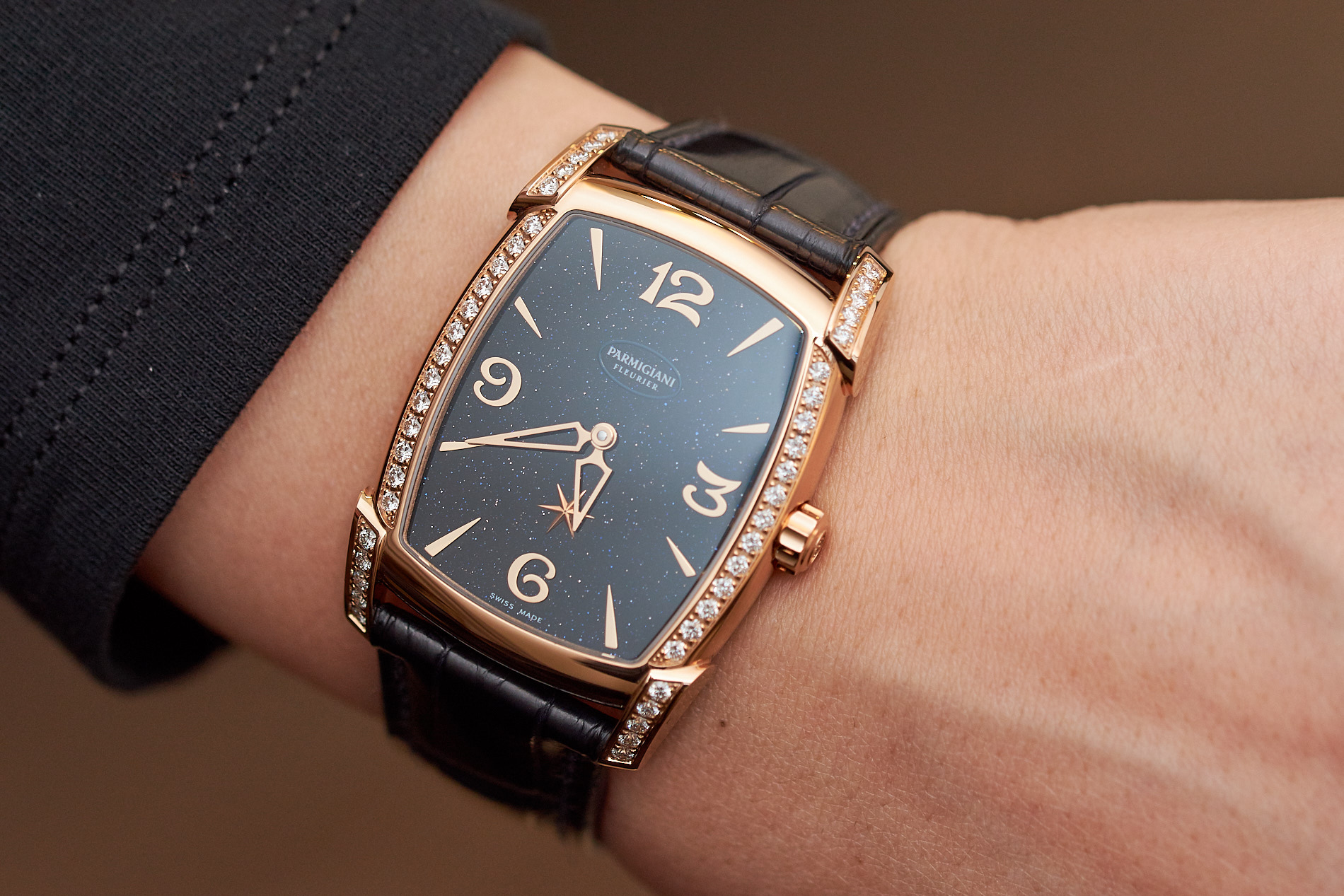 Parmigiani’s Kalpa collection has been the testament to how a few simple and gentle curve can end up in one of the strongest designs out there. The line, which represents the essence of Michel Parmigiani’s visual principles received novelties at the SIHH 2018.

It certainly excels in mechanical performance, but to me Parmigiani Fleurier is a very visually driven brand. The founder, Michel Parmigiani, finds inspiration in almost everything that surrounds him: his travels, magnificent treasures from the rich art collection of the Sandoz family, nature or the laws of nature (like the golden ratio, the golden spiral or the Fibonacci numbers) deliver many new ideas.

The marvels of the Sandoz collection have been restored by Michel Parmigiani and the manufacture still proudly operates a restoration workshop. On the other hand the same company comes up with futuristic designs such as the Bugatti timepieces. “Objects of art” like the clocks in the Le Jour et La Nuit project, the Toric Lépine clock or the Hippologia are further explorations which have ensured a name for Parmigiani among the collectors of eternal beauties. There are certain common visual guiding principles and proportions followed by Michel Parmigiani and his team, which are applied on the “everyday” wrist-watches, too.

Ever since it emerged, the Kalpa collection has represented the essence of these principles. It received four new models at the SIHH 2018: two automatic chronographs, the Kalpa Chronor and the Kalpagraphe Chronomètre, the manual Kalpa Hebdomadaire and the Kalparisma dedicated to the ladies.

The Kalpa was first introduced in 2001 and the characteristic tonneau-shaped case quickly became a distinctive piece for the brand. The 2018 models fine-tune its ratios even further with a slightly more compact case and shorter teardrop-shaped lugs. As a consequence, the pieces lay on the wrist even more comfortably. 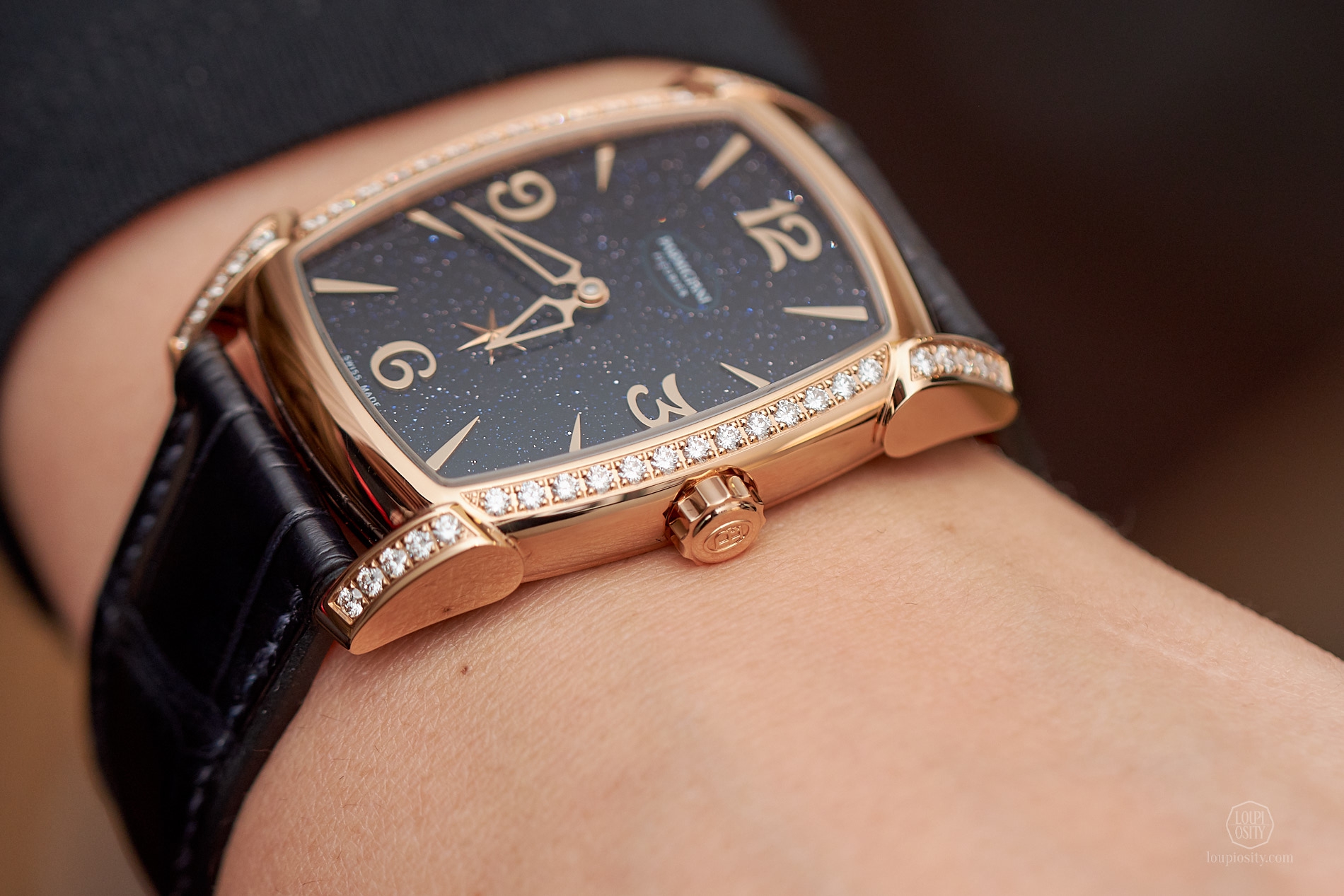 Aesthetics outside is paired with beautiful calibres inside. All models (except the Kalparisma) include tonneau shaped movements fitting in the case perfectly. These come from the Vaucher Manufacture Fleurier, a specialised division of the Sandoz Foundation, where Parmigiani Fleurier also belongs.

Michel Parmigiani created the calibre PF110, the first tonneau movement for the company 20 years ago. The movement first made its appearance in the Ionica case in 1999 – this model was later renamed to Kalpa.

Although the company has created high-complications such as last year’s 20th jubilee split-second chronograph Tonda Chronor Anniversaire with PF361 movement or this year’s integrated chronographs, the PF110 has a special place in Michel Parmigiani’s heart. As he says, the ritual of winding the timepiece is the most intimate relationship between the timepiece and the owner. The Kalpa Hebdomadaire received the manual, 3Hz PF110, which actually doesn’t require everyday winding. The serially linked two barrels hold sufficient energy for 8 days, hence the name Hebdomadaire, meaning “weekly” in French. The Côtes de Genève and circular-graining decorations and the bevelled bridges can be admired through the sapphire case-back.

Parmigiani also has its own dial manufactory, where this black dial with the opaline centre and “Tresse” guilloché pattern comes from too. The power reserve indicator is at 12 o’clock just like the date window. Seconds are indicated at 6 o’clock. 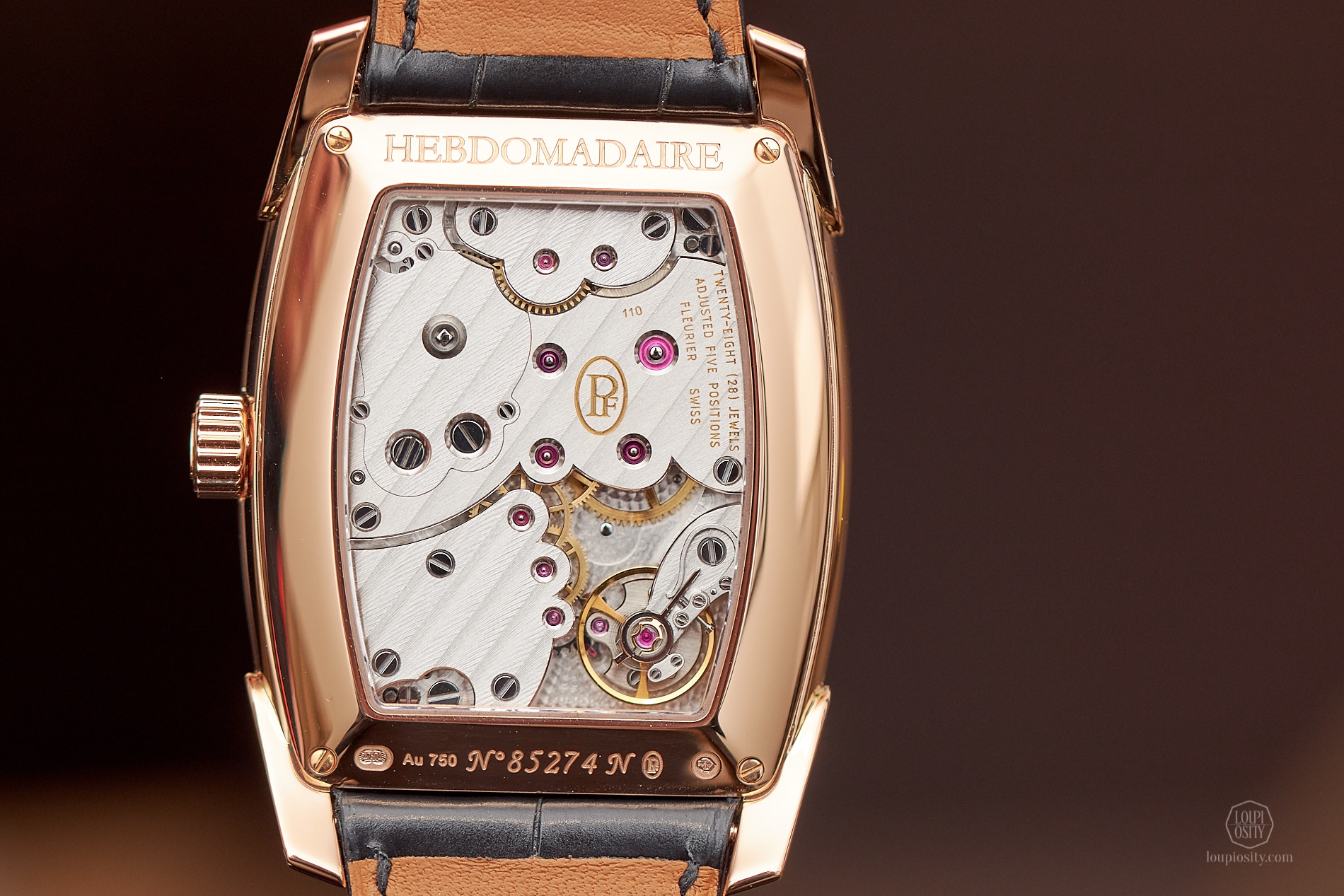 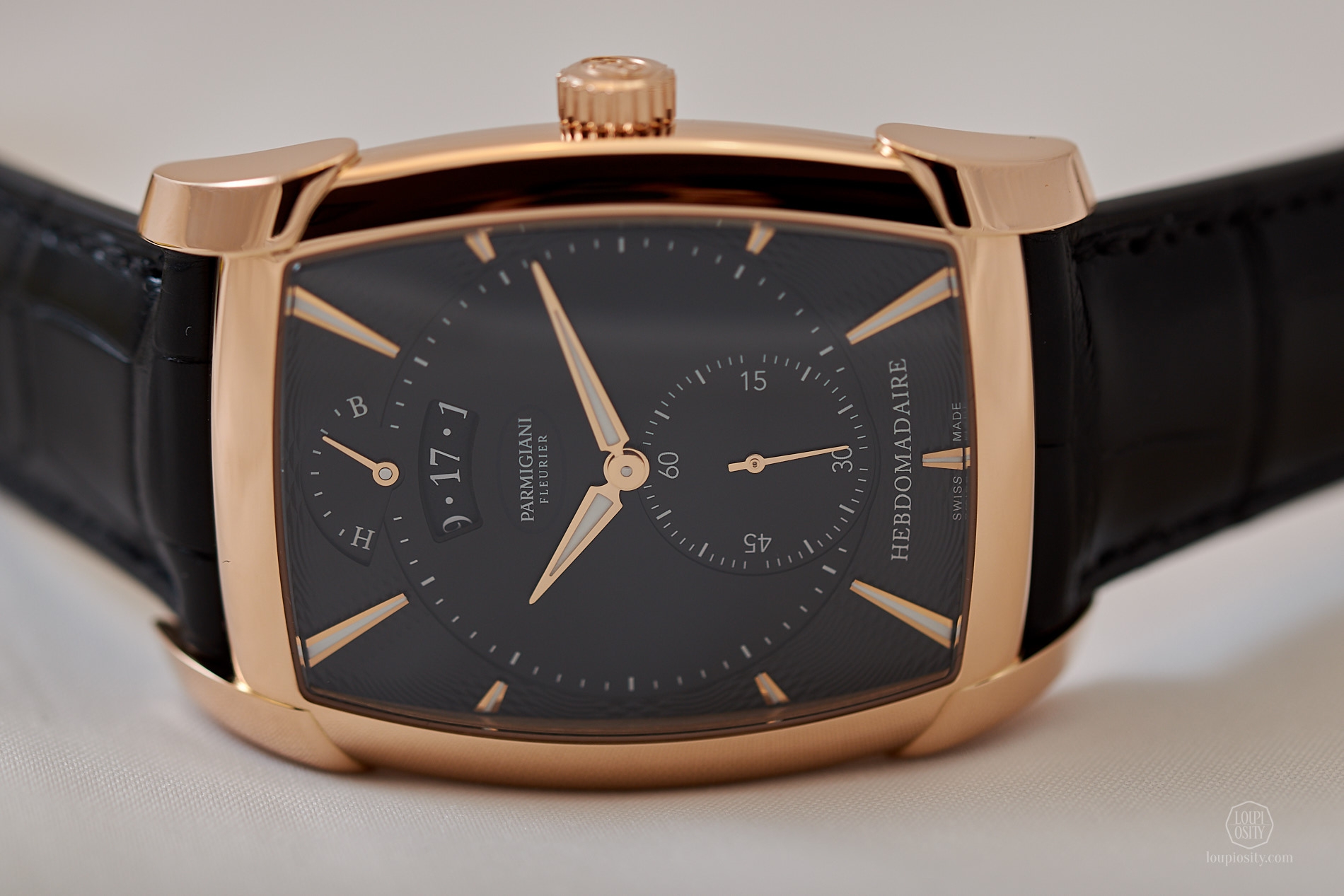 Kalpa Chronor is the first tonneau-shaped integrated chronograph to be entirely manufactured by Parmigiani. The COSC-certified PF365 is an almost completely solid gold movement. The chronograph is integrated on the main plate together with other components as one single movement. The decoration work is not for the faint-hearted due to the soft and supple gold elements. The PF365 oscillates at a frequency of 5 Hz (36,000 vph) guaranteeing 1/10 of a second chronograph accuracy.

It has a black bipartite dial, similar to the Hebdomadaire, but with a golden outline on the date window at 12 o’clock and of course with a tachymeter. The chronograph gold sub-dials are at 3 and 9 with a snailed finish.

The Kalpa Chronor model will be available in a 50-piece limited edition.

Parmigiani showcased the still dashing but one level simpler little brother of Kalpa Chronor. The PF362 offers the same functionality with a high-grade but less elaborate decoration.

The rose gold case is matched with a blue dial this time and rose gold appliqués.

This model is not limited. 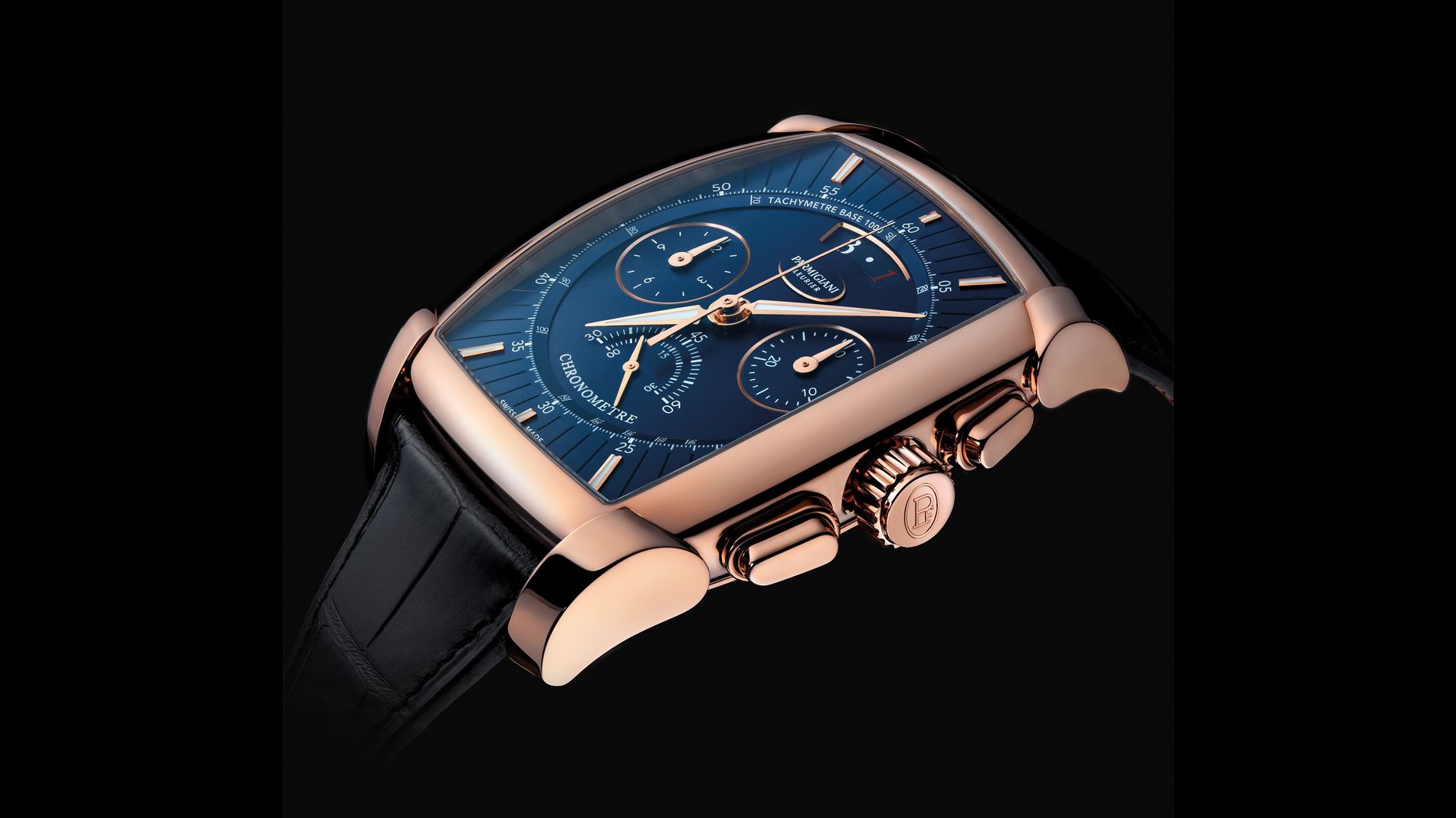 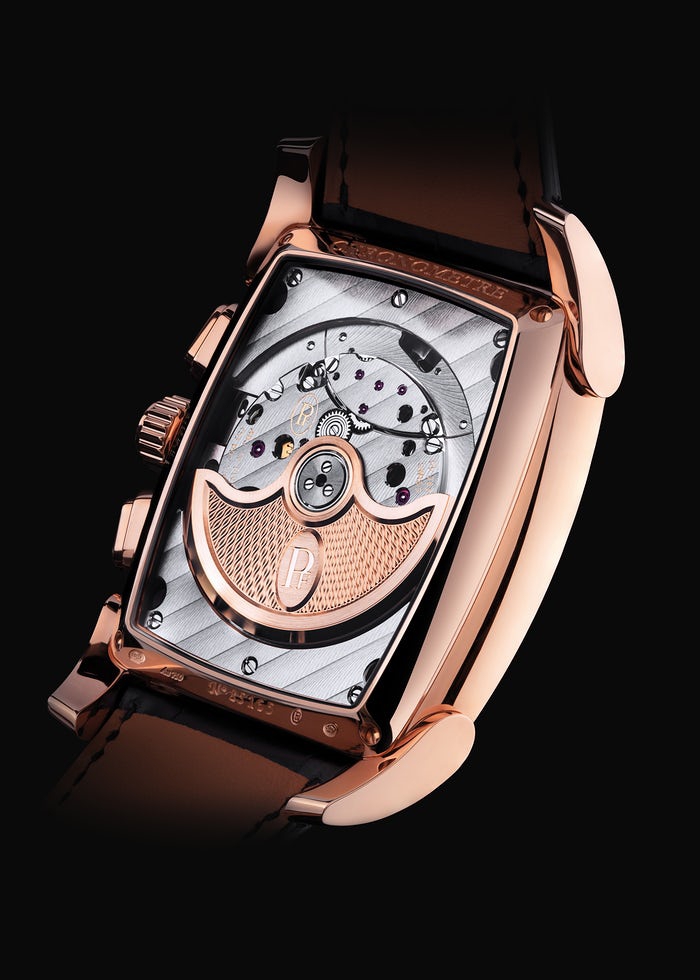 Parmigiani Fleurier offers a number of watches for women in the Tonda Metropolitaine, the Tonda 1950 and also in the Kalpa collection. The Kalparisma debuted in 2008 with a self-winding mechanical movement. The Kalparisma Nova line includes a little six-pointed gold star above the 6 numeral making one revolution every minute.

The new version is rose gold and it has a beautiful blue aventurine glass dial, reminiscent of the midnight sky. Matching the dial, Parmigiani opted for an indigo blue alligator strap from Hermès. (Hermès acquired a 25% stake in Vaucher Manufacture Fleurier, which is also the subsidiary of the Sandoz Family Foundation, like Parmigiani – see more here.)

The classy Kalpa shape works on ladies’ timepieces very well. The typography of the numerals and the revolving star lend some playfulness to this piece compared to the men’s models.

The movement is the only round one among the Kalpa novelties, the PF332 self-winding mechanical calibre. 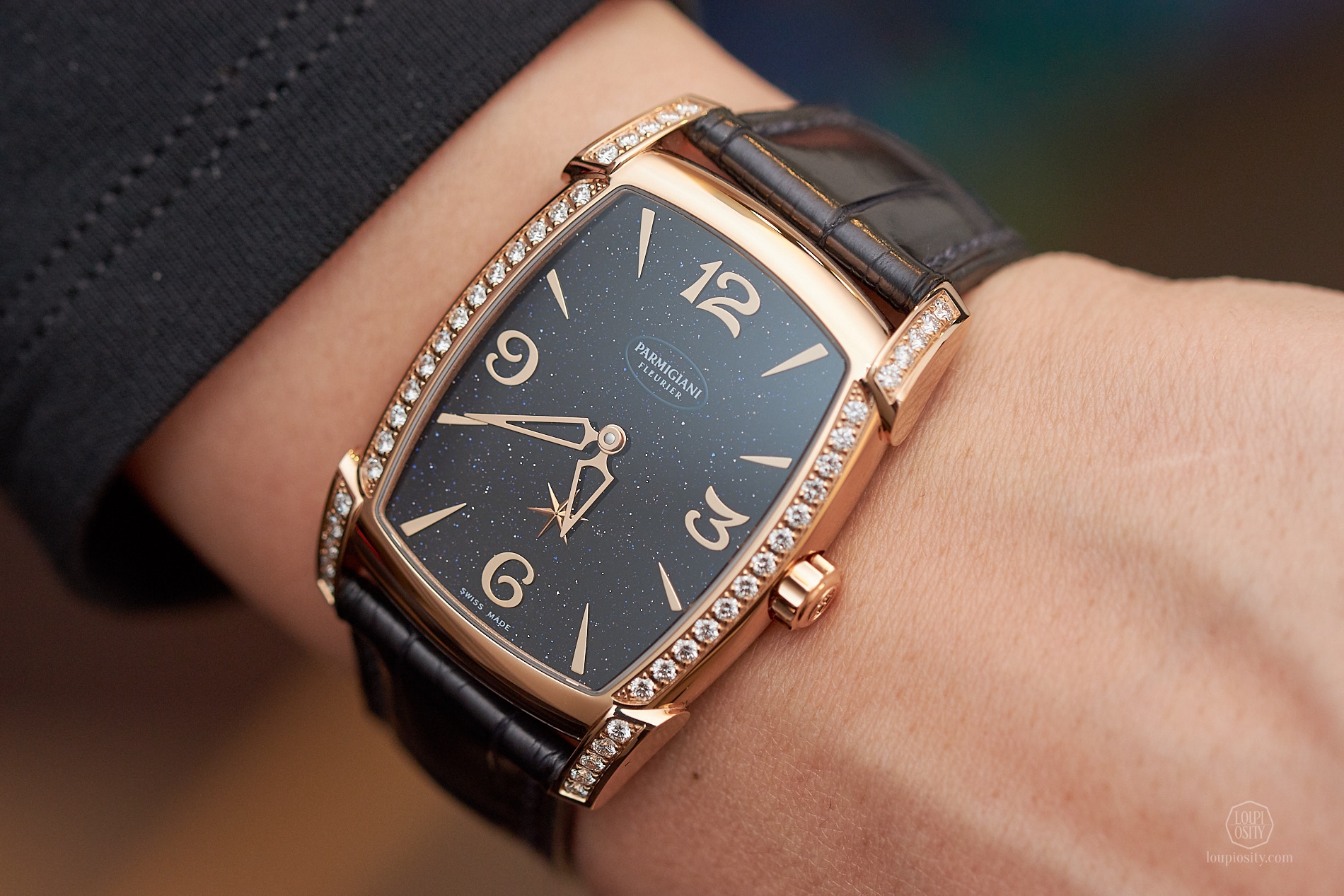 IWC Schaffhausen at Watches & Wonders Shanghai IWC Schaffhausen Portugieser Chronograph was released at Watches and Wonders Shanghai with steel bracelet.New views An overview about a few upcoming finewatchmaking events - hopefully all in real life - follow us along.#MakeSwissMadeGreenAgain With the iceberg-pure ‘Concept’ watches H. Moser & Cie has captivated me years ago. The novelties in 2019 at SIHH include fantastic Concept pieces in the Swiss Alp, Endeavour and Venturer lines.