“Mechanical wonders and the art of watchmaking” by Parmigiani 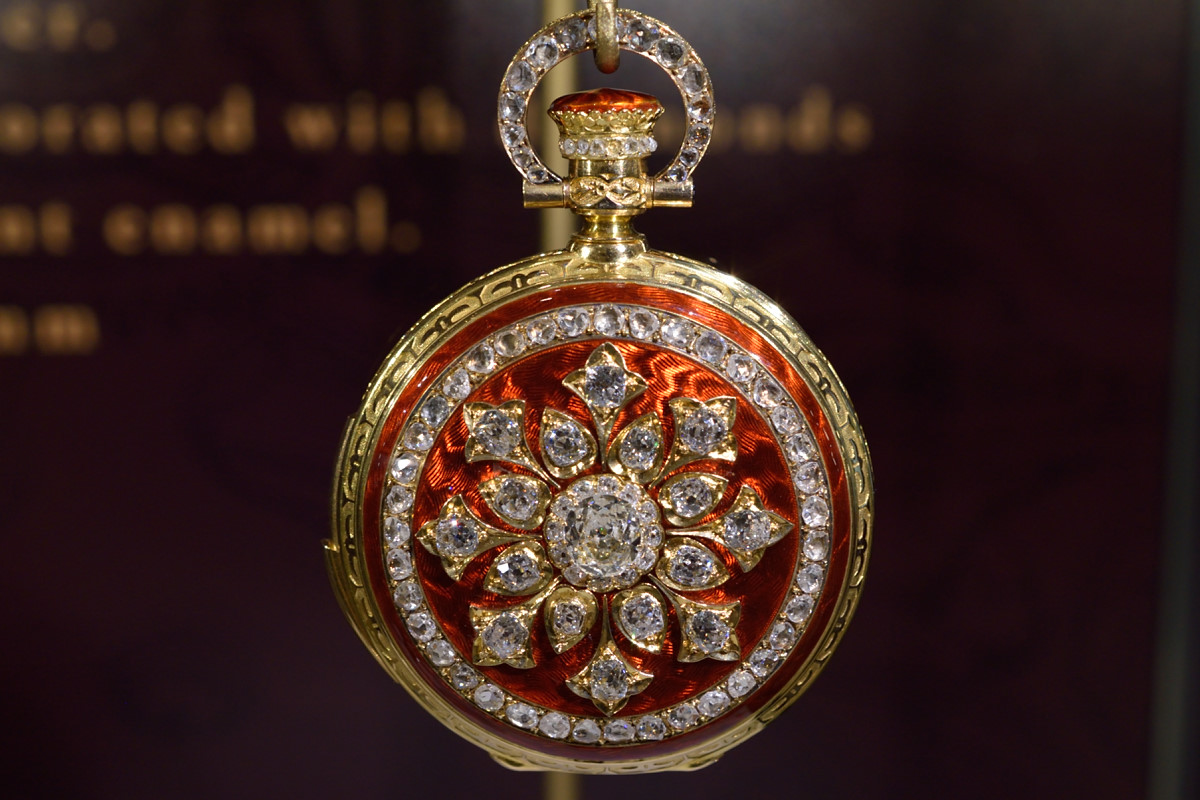 Last Spring I visited Parmigiani Fleurier and five other establishments of the Sandoz Family Foundation in the Jura – some of them make sure that time is measured with precision while others dress up the moment to please the eye.

Although they also excel in technical solutions, I find Parmigiani’s designs particularly interesting. My walk in the Musée d’Horlogerie in Le Locle gave me the explanation for the reason: beautiful mechanical curiosities from the 18th-19th centuries, the beloved muses of Michel Parmigiani, were looking at me from the walls, the classical furniture and in the exhibition windows.

This February, just after the SIHH, some of these muses as well as the inspired pieces travelled to Zurich for a special exhibition in the Espace Connaisseur of Les Ambassadeurs, entitled “Mechanical wonders and the art of watchmaking”.

The exhibition is open between 4 and 26 February, in Bahnhofstrasse 64, 8001 Zürich.

Upon the occasion of the opening, we were accompanied by Michel Parmigiani, whom I had an interesting conversation with. 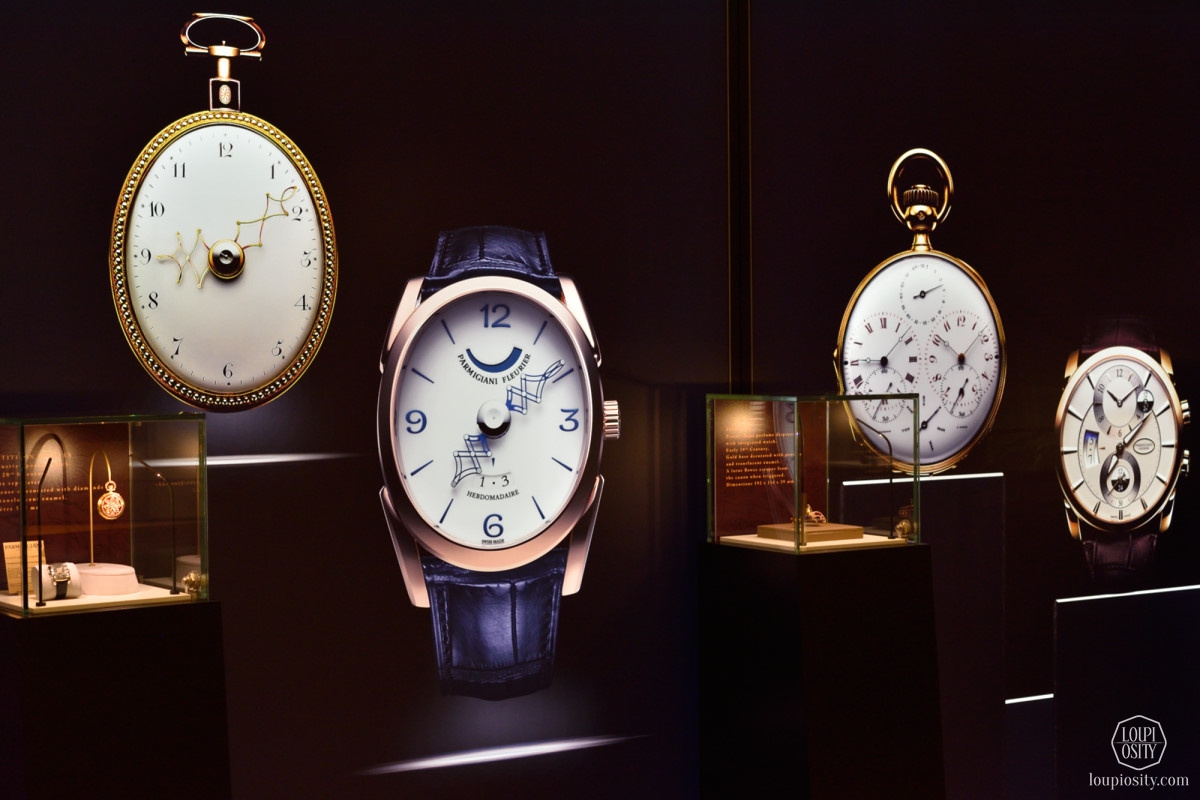 The kiss of a muse

As creative minds normally do, Michel Parmigiani finds inspiration in almost everything that surrounds him: his travels, magnificent treasures from the rich collection of the Sandoz family, nature and the laws of nature (like the golden ratio, the golden spiral or the Fibonacci numbers) all deliver many new ideas.

Art, for instance the sculptures of Edouard-Marcel Sandoz, have also influenced his works. Edouard-Marcel was a sculptor and expressed himself via the medium of bronze and ceramic, and through the direct cutting of stone. His arts’ main topics were animals: cats, rabbits, birds and fish are immortalised in a really recognisable style.

And of course, major shaper of Mr. Parmigiani’s own style has been the clock and watch collection of the Sandoz family he has been restoring since the 1980s.

“Restoration is a very complete form of craftsmanship” – as Michel Parmigiani describes it. A good restaurateur needs a great amount of respect and humility for the past. It is exciting to give a fresh start to an already forgotten or long unused object, such as the unique double-barrel pistol and its songbird from the Sandoz Family Collection, which his atelier breathed alive again with twelve months of work. The little bird was silent for too long, but now she performs her pirouette again, opens her beak, turns the head, flaps her tail and wings, and meanwhile sings a lively tune.

Parmigiani’s belief is to re-establish the working condition by utilizing all the original parts where possible, but recreate those that are defective and prevent operations in the most original manner.

The initial weeks (if not months) of restoring are taken up by careful observations and documentation of the condition. According to Mr. Parmigiani, in these fragile constructions the most challenging to restore are often not the marks of time, but botch fixes.

Restaurateurs have to have great knowledge about the materials and techniques of the given period, and must spend a considerable amount of time researching information about how the piece originally looked and worked. Sometimes, when the object is in bad condition, this may involve the examination of similar pieces to draw conclusions about the original condition. The often extremely time-consuming process of restoration is well-documented with photos as well as written notes, which may supply information for subsequent recoveries.

The manufacture is famous for its astonishing “objets d’art”. Every year at SIHH Parmigiani Fleurier exhibits something spectacular at their booth, that usually becomes a “must-see” of the fair.

Examples include the Fleur D’Orient table clock, or the Hegirian calendar table clock from 2010, which has a lunar calendar (used presently by the Islamic or Hijri Calendar) designed to work continuously without human intervention by correcting the lunar cycles. Parmigiani introduced the Toric Lépine clock in 2015 as well as the Le Jour et La Nuit project undertaken together with Lalique and most recently the Hippologia.

These creations combine the most exciting fine watchmaking and automaton knowledge of Mr. Parmigiani and his team, blessed with a beautiful and creative appearance. 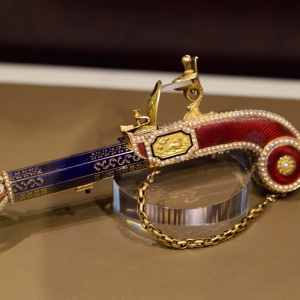 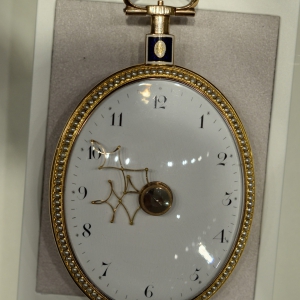 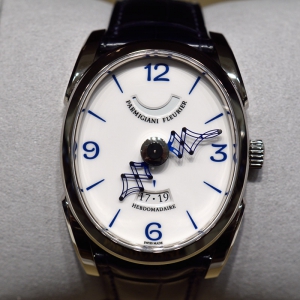 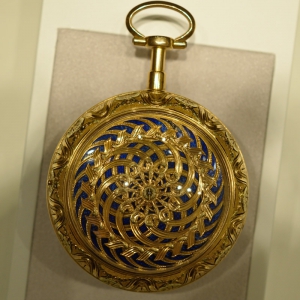 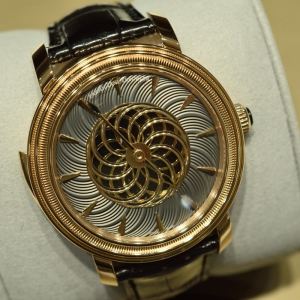 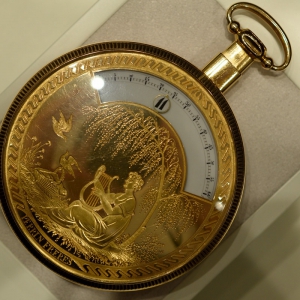 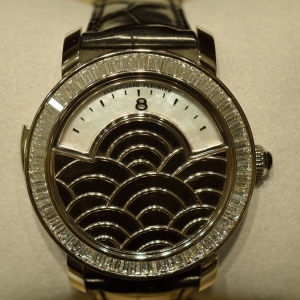 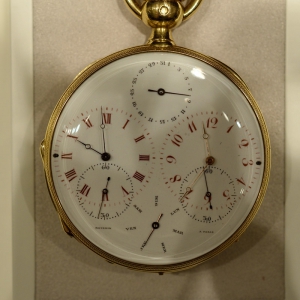 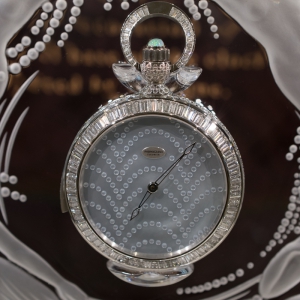 The Senfine – as Michel Parmigiani calls it – is an “avant-garde” project. The story started a decade ago at CSEM (Swiss Center for Electronics and Microtechnology), which is a private company for applied research. Pierre Genequand, a physicist and inventor at CSEM, devised a new type of mechanical regulator which uses flexible structures both in the escapement and the oscillator. He partnered with Vaucher (this manufacture became a member of the Sandoz Family Foundation in 2003 with a mission to produce high-quality manual and automatic mechanical movements and additional modules) to create a working prototype.

The first version was shown in 2014: a mechanical movement with power-reserve of one month.

Now the running time has increased to an unbelievable 70 days and the Senfine concept watch was introduced at SIHH 2016. This escapement could be realized by applying new elastic materials that made their way into watchmaking. However, it is still in an experimental phase – he notes. Many further questions are raised every day and the answers are being chased, for example how will the new construction be shock-resistant, and new measuring tools are required too.

Parmigiani Fleurier was founded in 1996, thus the company celebrates a round anniversary this year. Although it lets itself be inspired by ancient pieces – as the exhibition perfectly illustrates – the company has taken the route of constant evolution since its existence, of which the anniversary chronograph is definitely a new milestone.

Parmigiani Fleurier showcased the Tonda Chronor Anniversaire, the first integrated chronograph of the brand. It means that the chronograph is not a module added on the base movement, but the entire calibre is a single system mounted on one main plate. It also has a split-second function or rattrapante, which makes the measurement of two coinciding events possible. Two superimposed second hands run together – upon the first stop event, one stays at the position, while the other continues to run.

Michel Pamigiani put the importance of the new PF361 calibre this way: “Let me take a metaphor from music – the role of the tourbillon among the complications is like the role of the first violinist. While the integrated chronograph on the other hand is the whole orchestra.”

It is no surprise, why one of the most classical and emblematic lines of the manufacture was selected for the anniversary, the Tonda. The timepiece is produced entirely in gold, either in pink or white gold with silver and blue Grand Feu dials and is limited to 50 pieces. 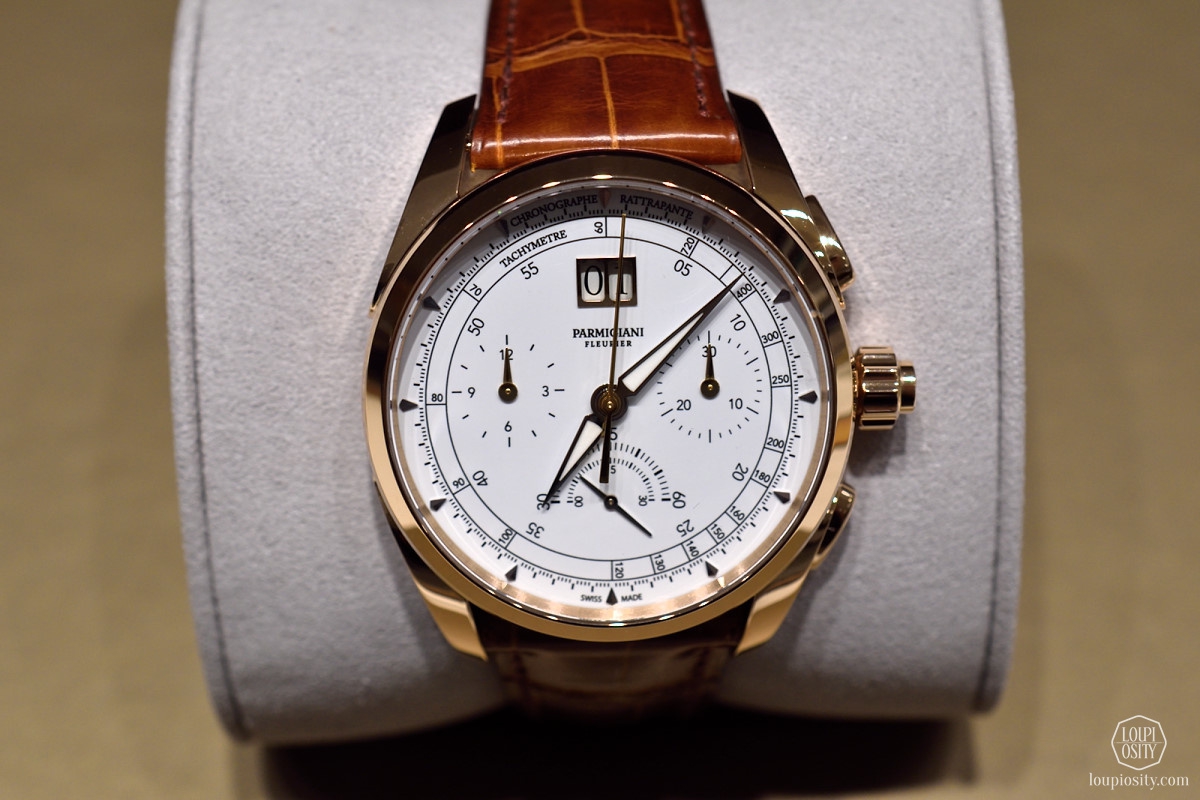 We visited Parmigiani Fleurier at the SIHH 2016, too. See a selection of the novelties introduced at the show. 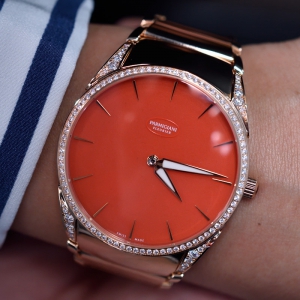 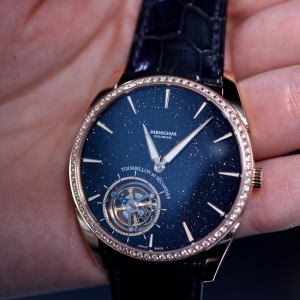 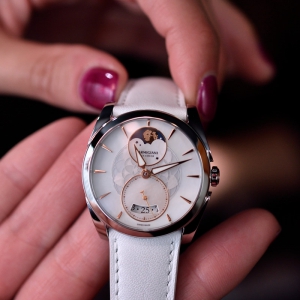 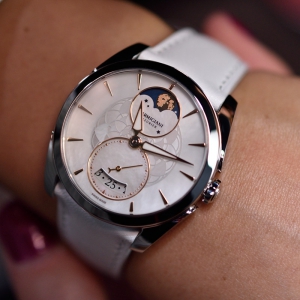 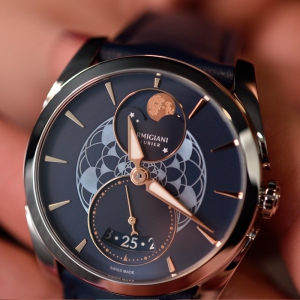 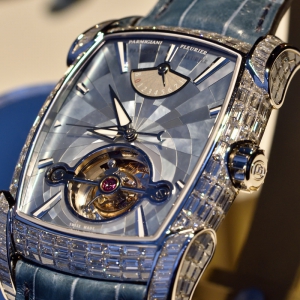 IWC Schaffhausen at Watches & Wonders Shanghai IWC Schaffhausen Portugieser Chronograph was released at Watches and Wonders Shanghai with steel bracelet.Geneva Watch Week A great amount of finewatchmaking brands will present their latest novelties to press, retailers and to the public in Geneva From 30 March until 5 April with the hybrid concept - online launches will be dedicated for those who are not able to travel to Switzerland this spring.Betty Catroux, Yves Saint Laurent - Feminine Singular This March the Musée Yves Saint Laurent Paris devotes a special exhibition to Betty Catroux, fashion icon and Yves Saint Laurent’s ‘female double.’ The pieces displayed at the exhibition come from a major donation Betty Catroux has made to the Fondation Pierre Bergé.