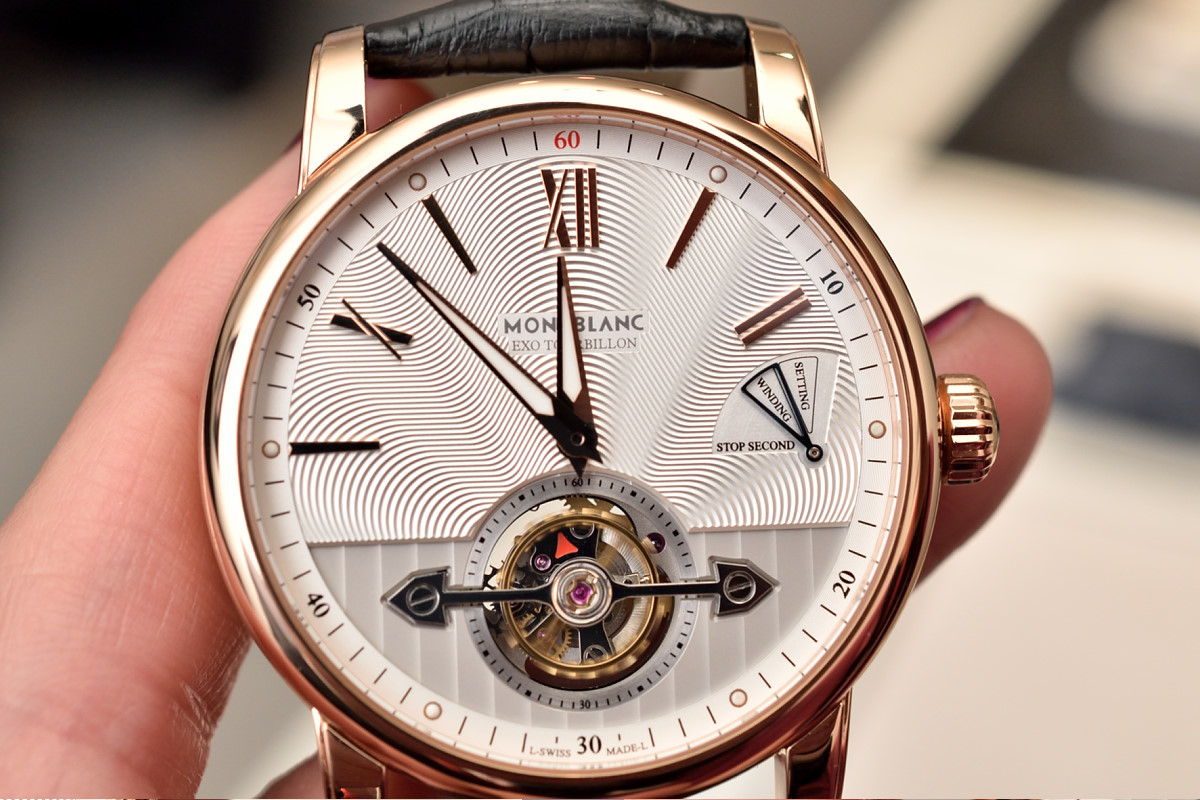 Back in Hong Kong at the Watches and Wonders exhibition we sailed with Montblanc and the great discoverer, Vasco Da Gama. One of the novelties that gave us a hard time in returning was the Montblanc Heritage Chronométrie ExoTourbillon Minute Chronograph Vasco da Gama. It beautifully depicted the night skies over Da Gama’s errant ship with aventurine and lit the stars with diamonds to lead them to new worlds.

The ExoTourbillon returned in three new models to the SIHH 2016 with one that we became equally attached to.

Come, cross the oceans with me with full steam ahead! Next morning, I want to have my coffee already in Manhattan.

Montblanc’s 4810 ExoTourbillon Slim timekeeper summons the heydays of steam liners by a clever design element which captured my attention. The time setting and winding positions of the crown have a feedback display on the dial, inspired by the pulley system telegraphs of steam ships back in the late 1800s and early 1900s.

These telegraphs are in fact great examples of the mechanical developments of the era. They responded to the problem of having the captain steering the ship from the bridge separated from the engineers powering the vessel in its’ belly. To connect the eyes with the hands they actually embedded a mechanism with two identical dials and a usage code. One dial was placed in the command station, the another in the engine room, and both were divided into wedge-shaped slices each carrying a command. A lever around the dial mounted to a pulley inside the body was linked to the remote unit to transmit the commands. Down in the engine room the order appeared in the form of a central hand pointing to the appropriate wedge, and acknowledged by repeating the “overshots” with his lever to ring the bell and resting the same on the new command.
The beauty of the mechanism was more in the transmission, spanning in many ocean liners to well over a hundred meters and over a number of floors.

For accurate settings the new MB 29.21 calibre is equipped with a stop seconds mechanism, which freezes the oscillation of the balance wheel and reinstates it when released.

The contrast of the Côtes de Genève lower area and the waves of the Montblanc Star guilloché, like two different mood of the sea, enhance the oceanic theme. The straight ExoTourbillon bridge with the heavy arrow heads also recalls the man-made structures destined to conquer the elements. The case is 5N red gold. 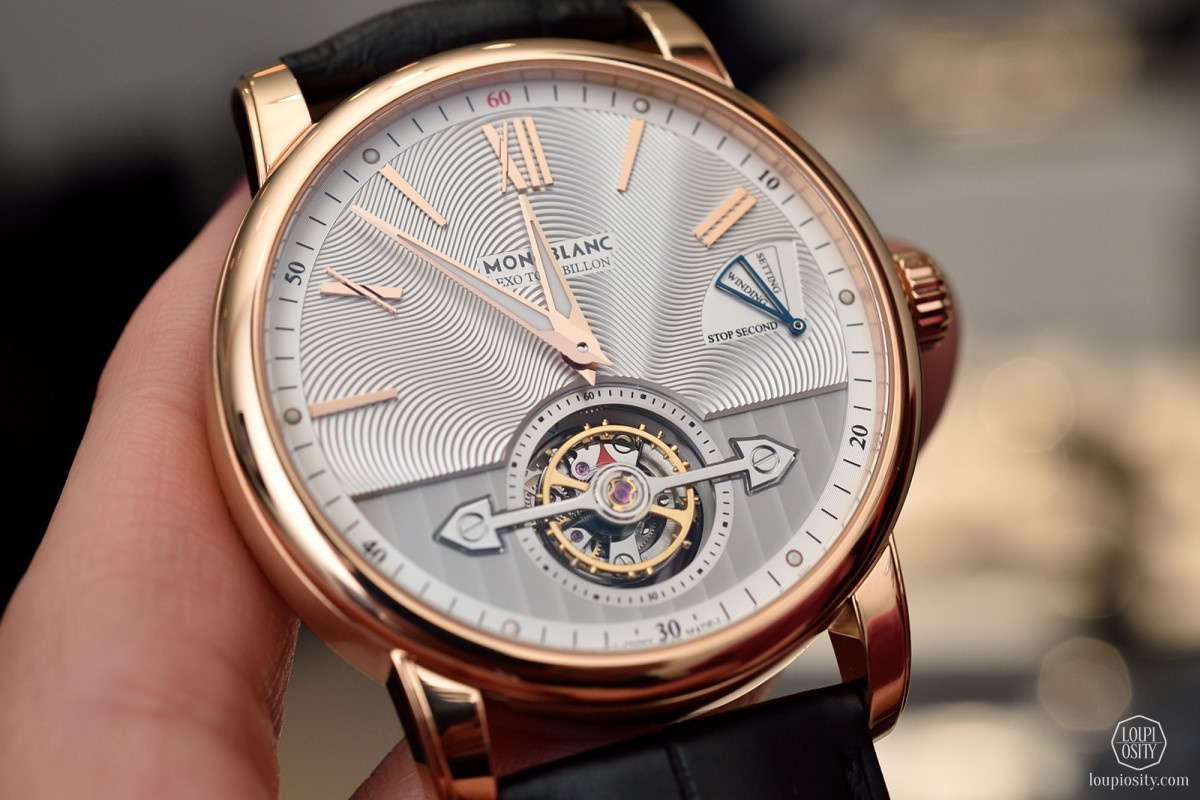 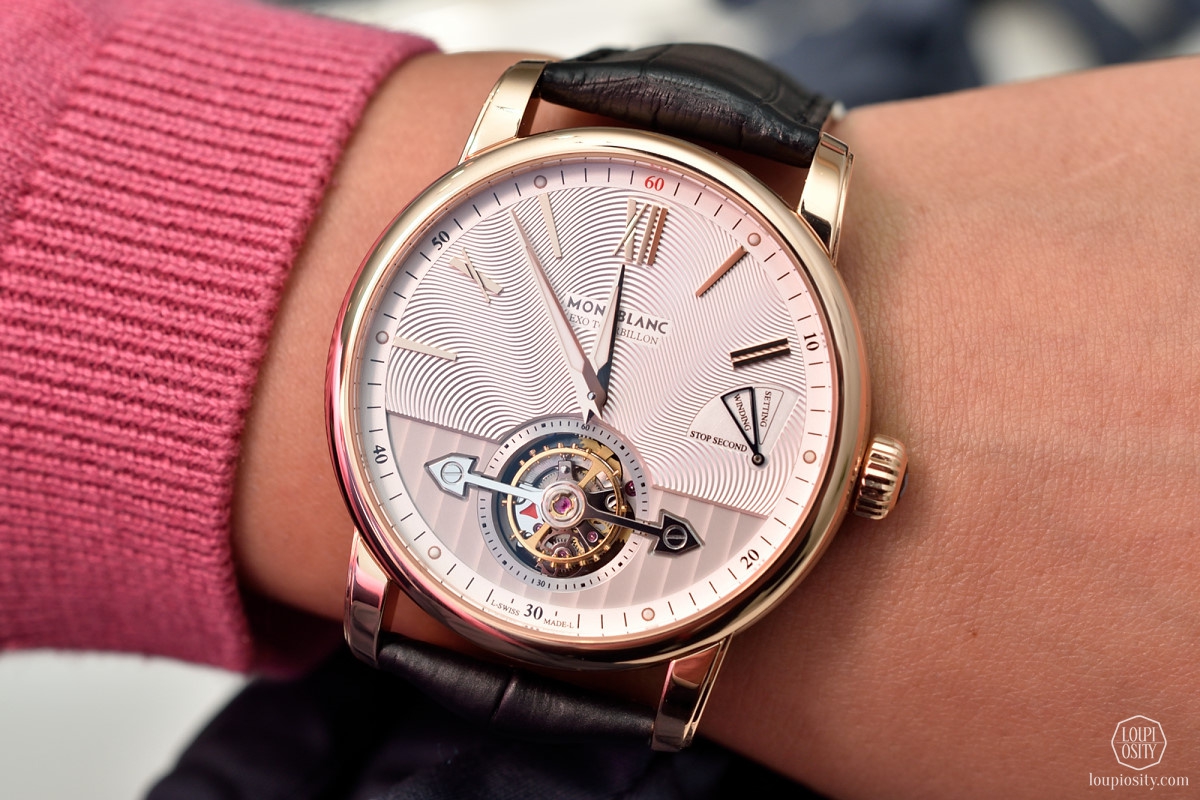 The 110 year anniversary of the company’s foundation was celebrated with multiple pieces this year, some of which are specially decorated, such as a series of 4810 ExoTourbillon Slim watches. The Montblanc Star guilloché of the previous model is replaced by a hand painted dial – three versions look at Europe, North-America and Asia from a birds-eye perspective. Blue oceans, green forests, brownish deserts and lush prairies alternate and through the aperture of the ExoTourbillon one may get a glimpse behind the scenes onto the giant machine that makes the world go around. The dial lays nicely in the 18k white gold case that provides a solid, yet reserved frame to the miniature. 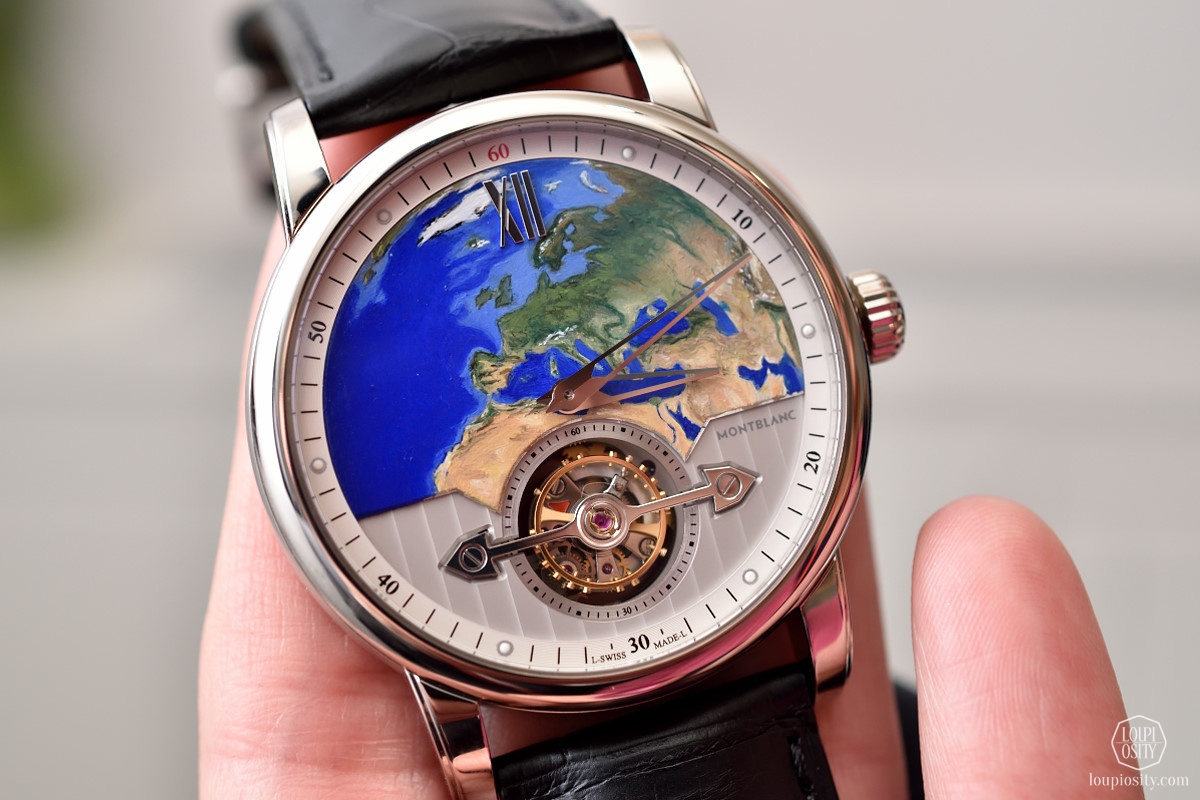 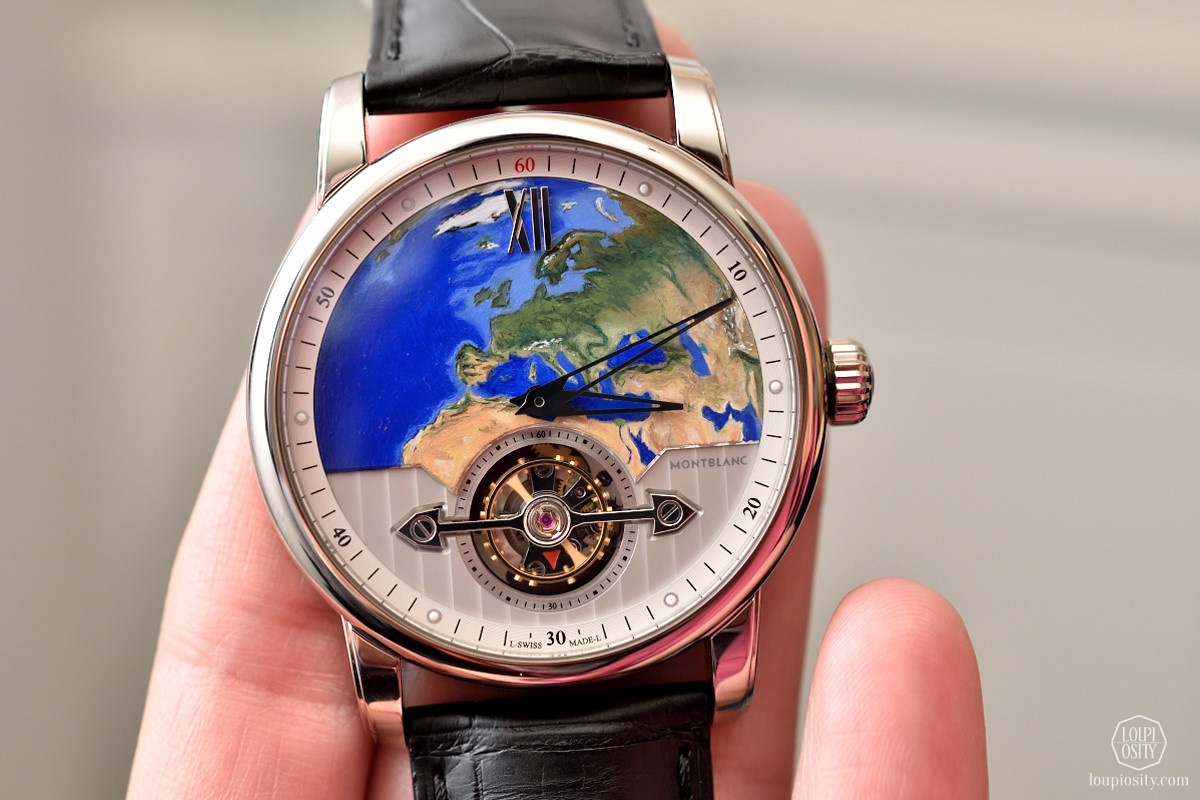 The TimeWalker line was launched in 2004 and contains sporty, modern and rather dark timepieces. In this collection the TimeWalker ExoTourbillon Minute Chronograph Limited Edition 100 and the TimeWalker Urban Speed UTC e-Strap were the newcomers in 2016.

The ExoTourbillon previously placed in more classical pieces made its way to the urban themed TimeWalker series. The complication found itself in a high-tech material setting, including titanium, carbon fibre and diamond-like carbon (DLC) – clearly dancing on the edge of the past and future. The layout of the dial and the calibre MB R230 is the same as the aforementioned Vasco Da Gama version, but the mood is totally different. The bezel is narrowed down and enhanced by red, which comes back on the hands and markers, too. Numbers are larger and more angular and surrounded by stripes emerging from the dial’s material as well as index painting.

The TimeWalker Urban Speed e-Strap arrived in 2015 and combined a digital technology strap with a manufacture movement. The look of the 2016 UTC model is completely in line with the Urban Speed series: black DLC case, black dial with anthracite luminescent hands, some red accents and a red second-hand. The functions are completed with UTC (Coordinated Universal Time) function. The time of the local time zone is indicated on the inner 12-hour scale, while the hour in the second time zone is shown on the 24-hour scale.

The strap is Montblanc Extreme Leather, developed by the Montblanc‘s Leather Competence Centre located in the heart of the Italian leather trade, Florence. It is a fully biocompatible leather with a woven carbon-fibre-style surface – resulting in an extremely durable yet elegant and stylish strap. The e-Strap, just as last year’s model, integrates an activity tracker, a Find Me function for smartphone and watch, notifications for incoming communications, and remote controls for the phone’s camera and music player. 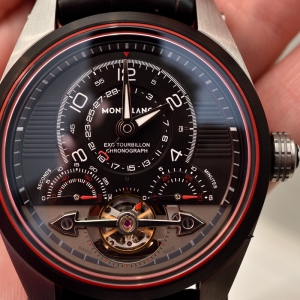 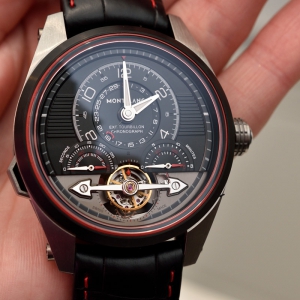 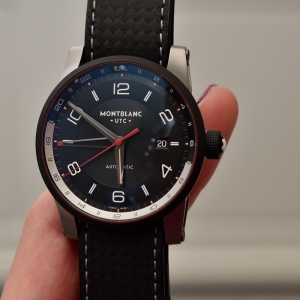 Nowadays a pocket watch is certainly not an everyday accessory of a gentleman, but a great way to applaud 110 years, so Montblanc showcased two.

The 4810 Orbis Terrarum Pocket Watch 110 years Edition shows the continents from the North Pole with a circle of main cities in each time-zone.The dial is crafted out of layers of sapphire crystal. The steel case of the pocket watch is open-faced (or Lépine-style case) with a steel chain and looks as if the contemporary met Bauhaus. The reverse is engraved with the transatlantic liner and Blue Riband winner “Deutschland”, which was built by the Vulcan Shipbuilding Company of Stettin and launched in 1900 by the Hamburg America Line of Germany. The pocket watch is limited to 110 pieces. 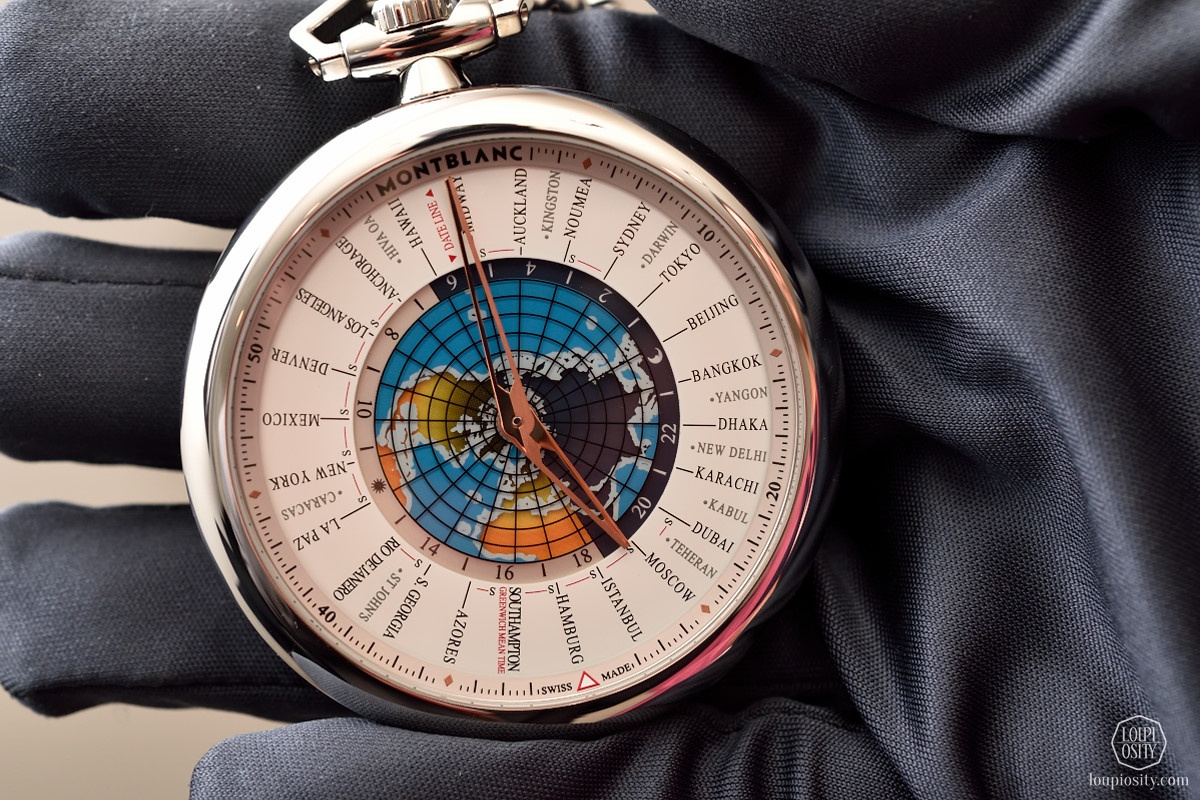 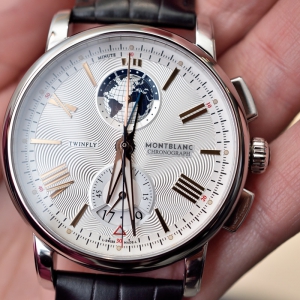 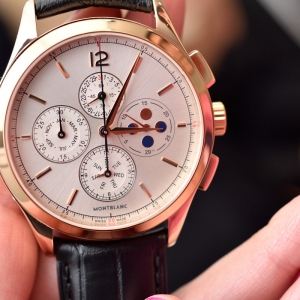 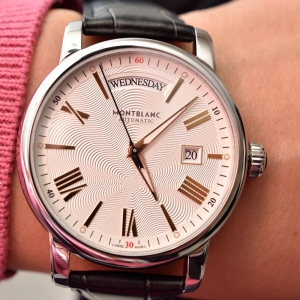 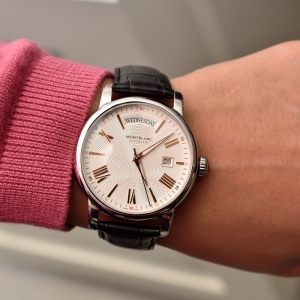 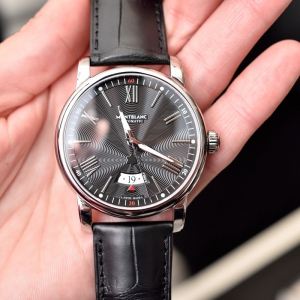 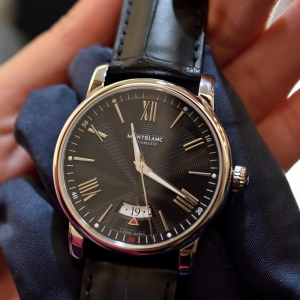