Montblanc at Watches and Wonders 2015 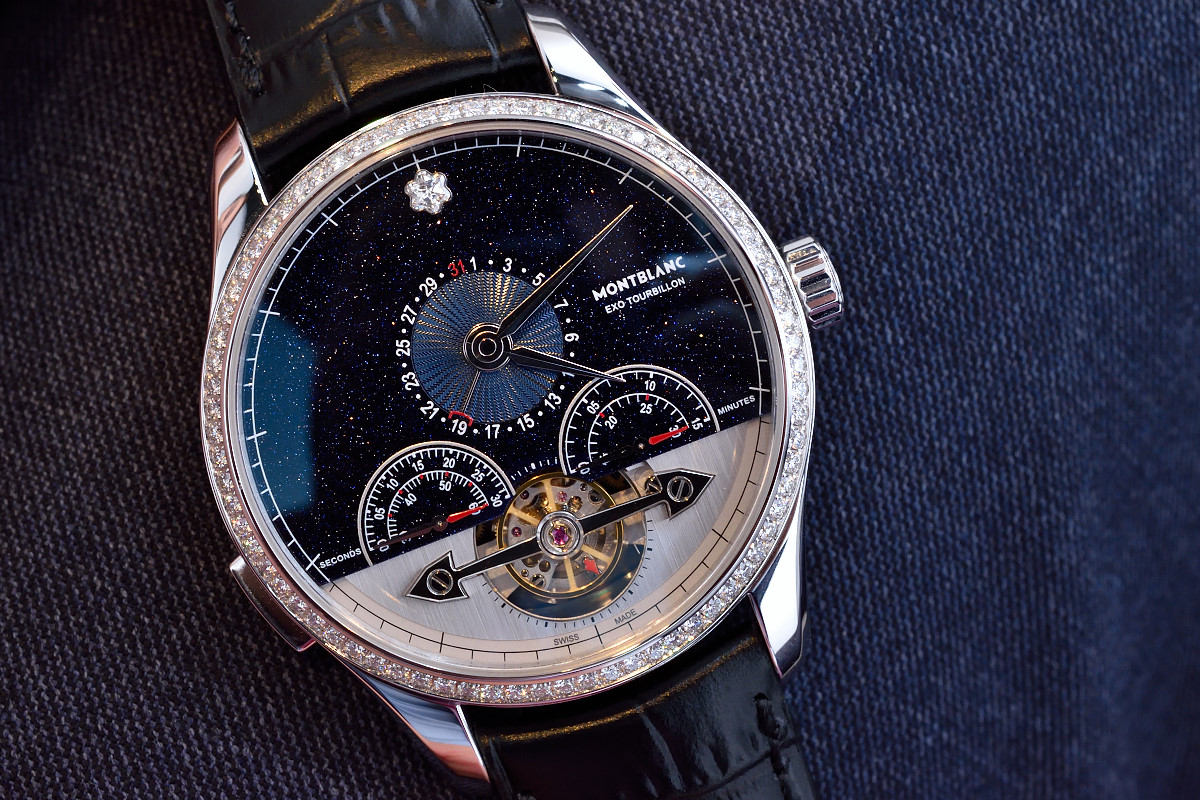 One of the things I adore when snowboarding is the ascent with the open-top ski lift. The purity of the air, the silence of the land and the magnificent ridges of the mountains calm down the soul like nothing else (combined with speedy rides, of course). Named after the highest home of snow caps in Europe, Montblanc is able to smuggle some of this elevated purity into their products. I like their well-thought-out designs, which – as opposed to just appearing under the same logo – form a unity across their entire product line. They are just like the Alps: clean, magnificent and eternal.

In Hong Kong we were certainly not expecting snow (the last time it snowed was in December 1975), but I would have been surprised if white peaks didn’t rise within the exhibition hall at the Watches & Wonders show. At the foot of the mountain we found some beautiful novelties from the company. 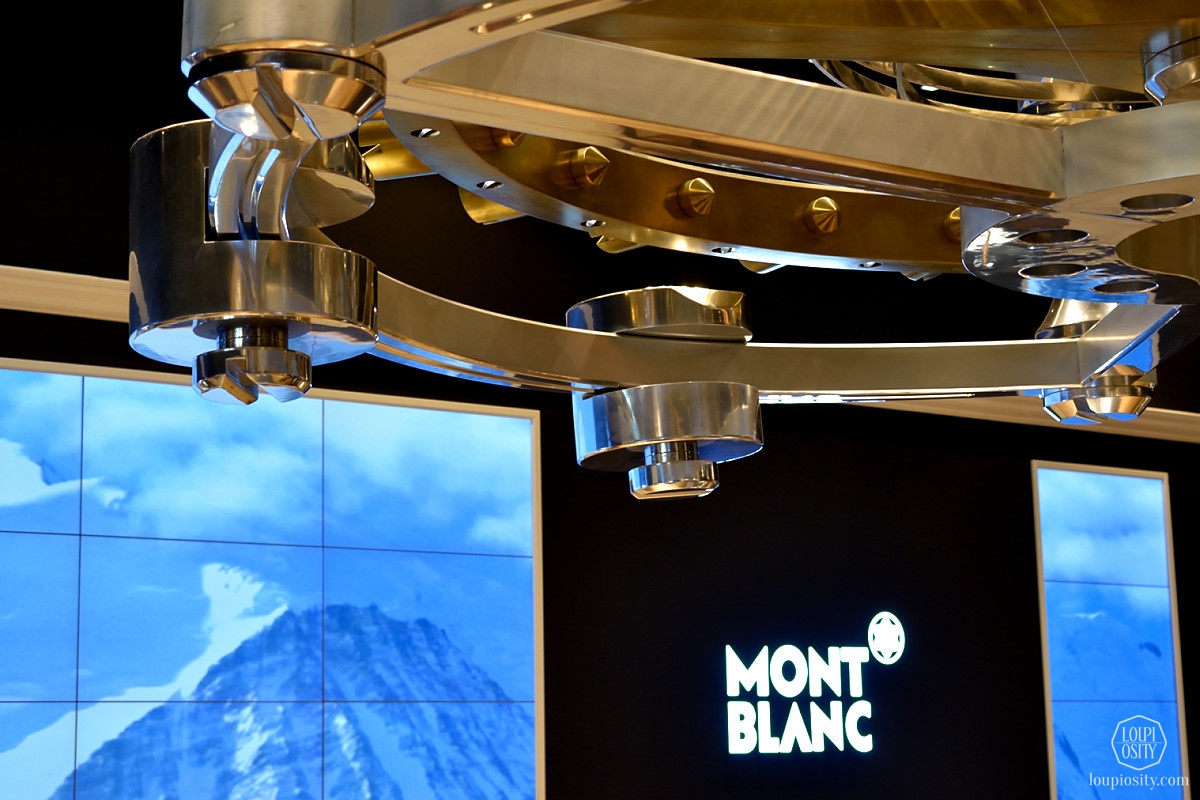 Let’s start with Montblanc’s most unusual novelty in Hong Kong: a transparent sapphire dial timepiece. Although the company has already made a skeletonized watch (the Skeleton Star Watch from the early 2000s), letting the sunlight kiss the moon phase gears is rather uncommon from Montblanc. Through the smoky sapphire crystal, parts of the Dubois-Depraz perpetual calendar module have become visible in a way that time and date indicators are still legible. The four sub-dial circles levitate over the plate, like water lily leaves in a pond. One shows the day of the week, another the months and leap years, the third the day of the month, while the fourth holds the moon disk. The lake-like effect is emphasized by the gold-plated indexes around the circumference swimming over the anthracite gray ground made of circular-grained metal. The shape of these appliqués tricks the brain by giving more depth to the timepiece which in reality is a mere 10.24 millimetres in thickness. The case is made of 18k red gold measuring 39mm in diameter, which makes it fantastically comfortable to wear.

The 3Hz MB 29.15 movement has an automatic Sellita base with approximately 42 hours power reserve and the aforementioned Dubois-Depraz perpetual calendar module. Each is tested in Montblanc’s lab for 500 hours before being sold. 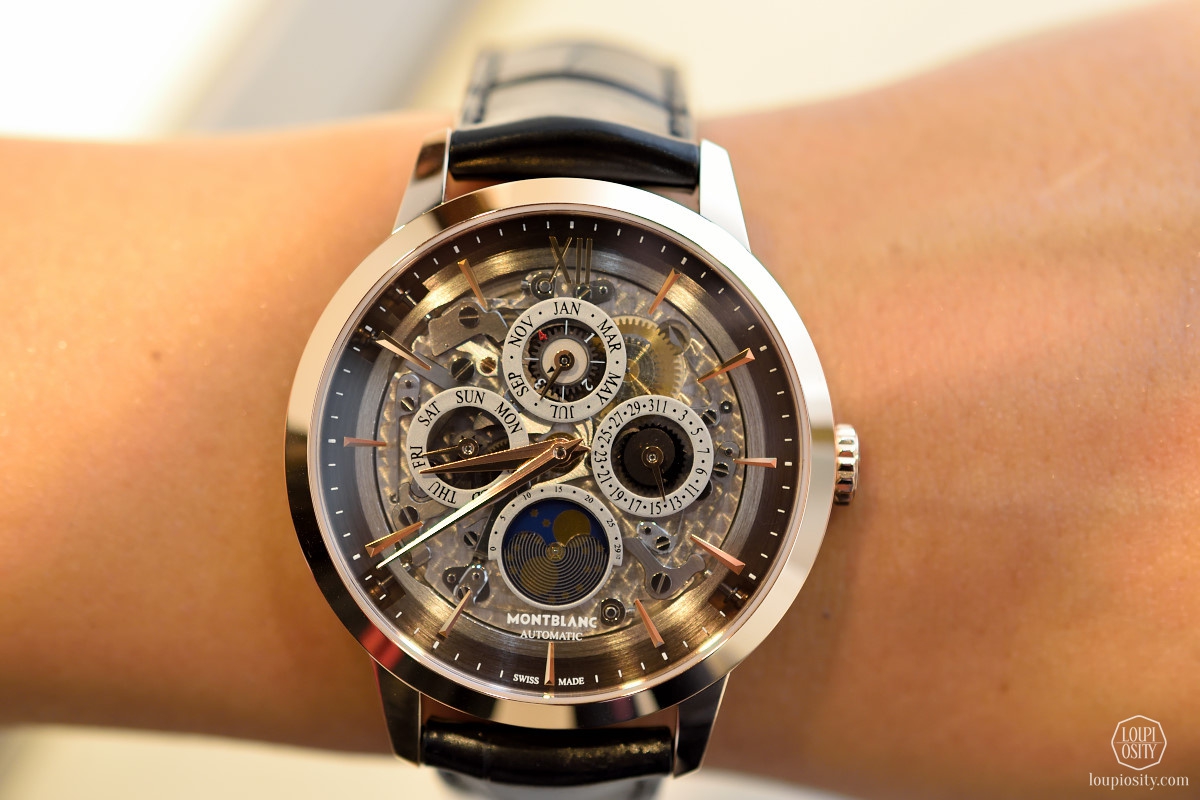 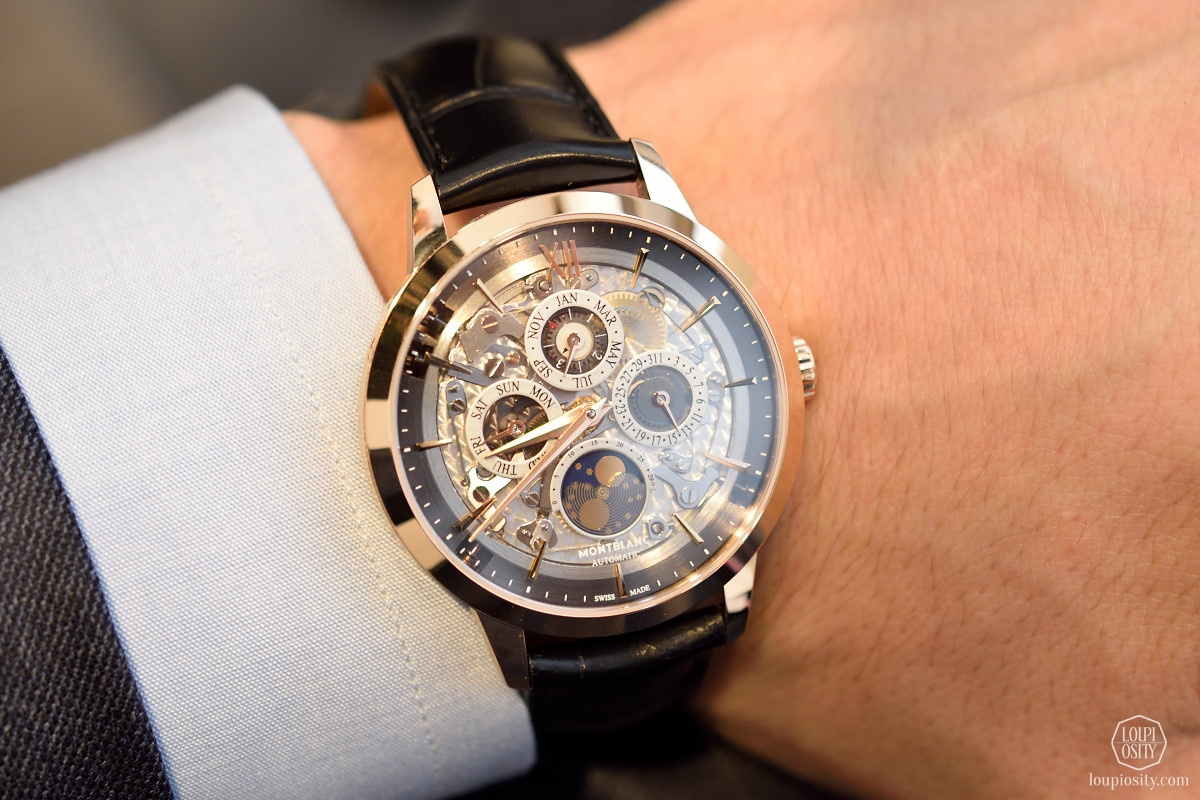 Fine guilloché adorns the dial of the simple and elegant Meisterstück Heritage Spirit Date Automatic that was introduced at the event. The indexes, like ships floating against the waves, point to the central Dauphine hands that are equally gilded. The only numerals to appear are the XII hour marker on the top and the date at 3 o’clock. The timepiece is operated by the MB 24.09 automatic movement. 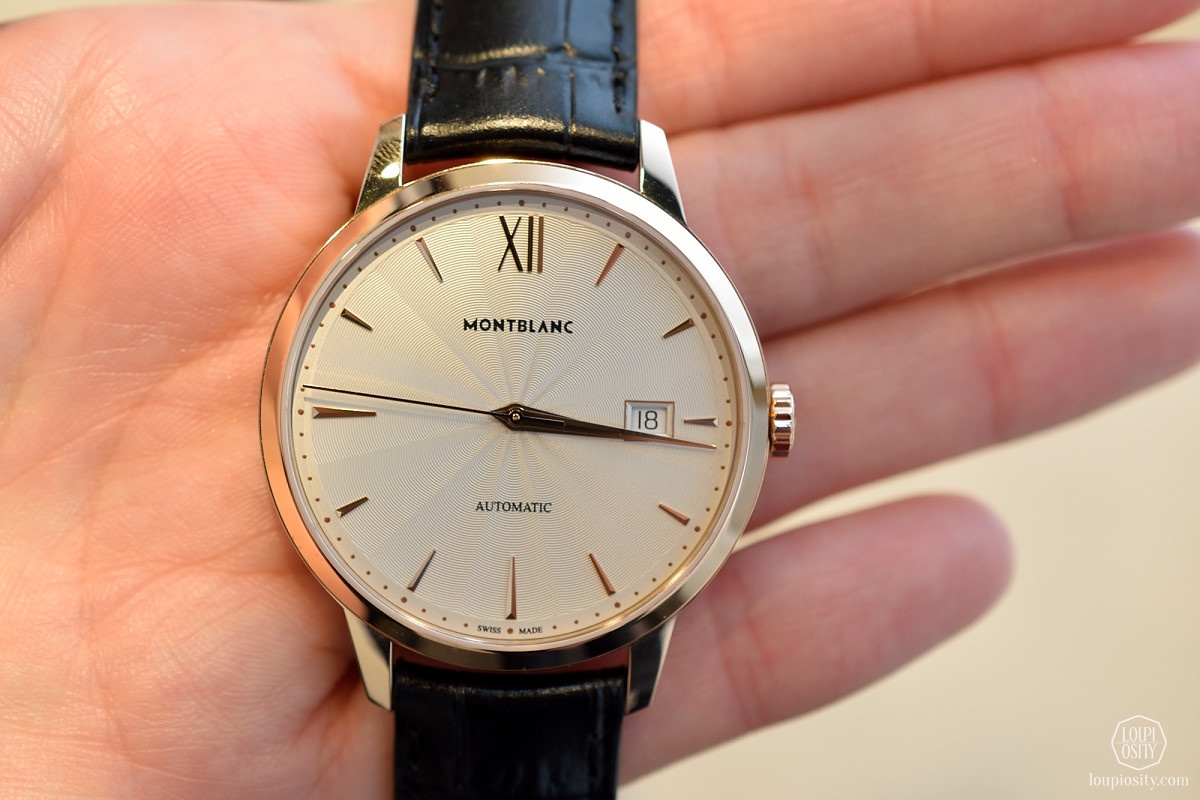 Back in January Montblanc introduced limited watch collections that pay homage to the famous Portuguese explorer.

Vasco da Gama was a key person in the establishment of Portugal’s colonial empire by discovering the marine route from Europe to India.

In the 1480s King John II of Portugal was eager to decrease his dependence on feudal nobility by generating revenues from the royal commerce of the era’s highly lucrative goods, such as gold, slaves and spices. He supported the exploration of new sources thus the discovery of new lands and sea routes avoiding his rivals. One of these contenders was the Republic of Venice, which practically monopolized the spice trade from Asia and India to Europe through the Silk Route and the Mediterranean. John was succeeded by his cousin Manuel I of Portugal, who continued his efforts and under his patronage the ships of Vasco da Gama sailed out on 8 July 1497 from Lisbon to sail around Africa and reach India. Da Gama’s journey took more than two years and gave Portugal a sea route to the highly sought-after spices of Asia far from the watchful eyes of Venice. This established the Kingdom’s century long conquests along the East coast of Africa and Asia delivering wealth to the court.

This was the longest ocean voyage ever undertaken until this point with challenging legs, such as the 3 months spent on the Atlantic passing 10,000 kms with no sight of land, or the 132 days crossing the Indian Ocean against the monsoon (as opposed to the 23 days a few months before with the wind on the way to India).

Da Gama made the same journey three times until malaria took him in Cochin, India on Christmas Eve 1524.

On the new versions of the SIHH pieces showcased in Hong Kong, Montblanc depicted the night skies over the Indian Ocean and lit a few lights to help da Gama to navigate the unknown waters.

Almost 80% of the surface delimited by the 44mm diameter case has been covered with aventurine shining deeply and beautifully. The Montblanc Heritage Chronométrie ExoTourbillon Minute Chronograph Vasco da Gama Diamonds has also been sprinkled with diamonds, which line up like stars on the horizon. The central offset small sub-dial with the date indicator floats in this night sky extending the dimensions of the aventurine. It does give the feeling of a small ship searching its way on the oceans guided by Acrux, the brightest star of the characteristic Southern Cross constellation.
Winds and currents are enkindled by the ever-moving ExoTourbillon and the Calibre MB R230 developed in-house. This fantastic model is limited to 25 pieces. 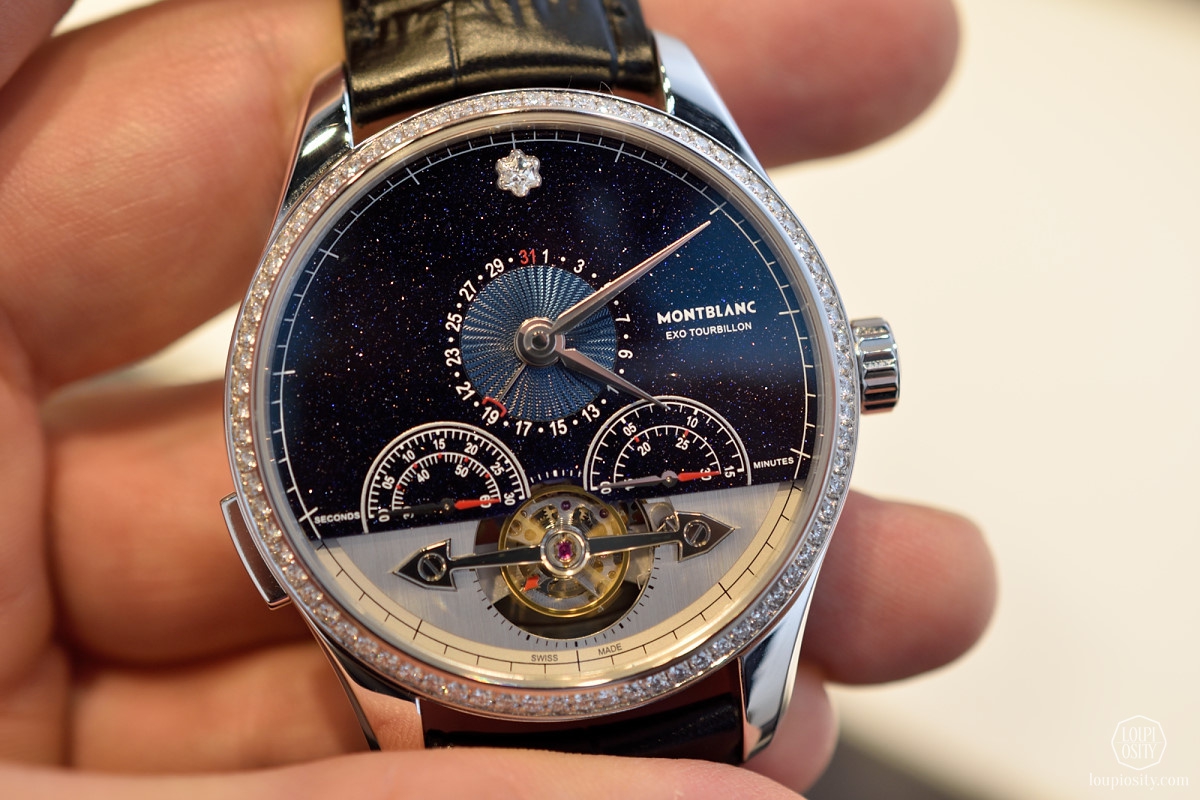 Another brilliant new version of an SIHH piece was the Montblanc Villeret Tourbillon Cylindrique NightSky Geosphères, which yet again switches off the daylight and sends the thousand sparkling inclusions of the aventurine shine. The Southern and the Northern Hemispheres are engraved onto the dial having a ring circling around them to indicate time in the appropriate time-zones. Inside, the Manufacture Calibre MB M68.40 is responsible for precision for which a 2.5 Hz balance wheel and a cylindrical balance-spring is used. Their elegant moves can be admired in the tourbillon on the top. 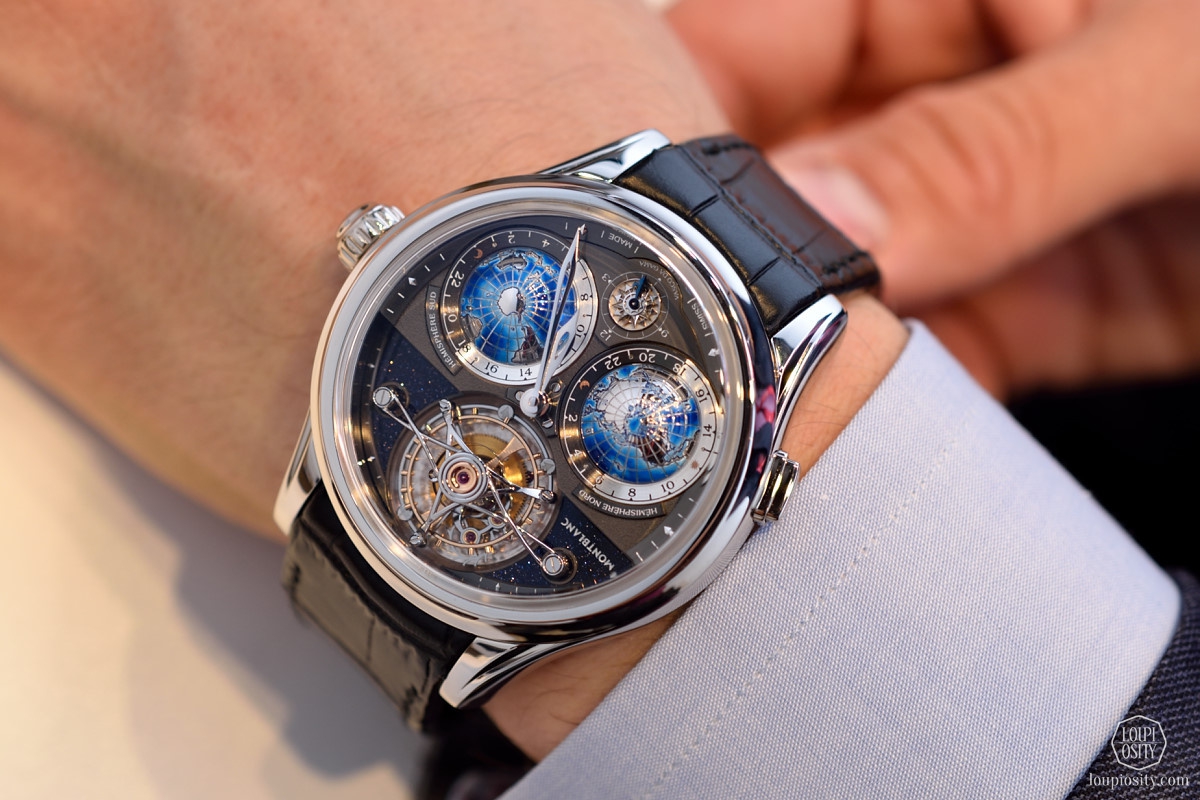 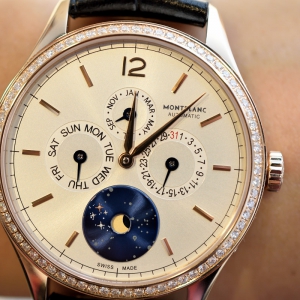 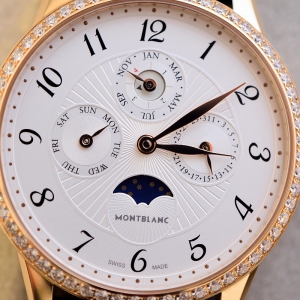 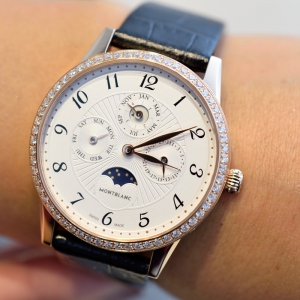 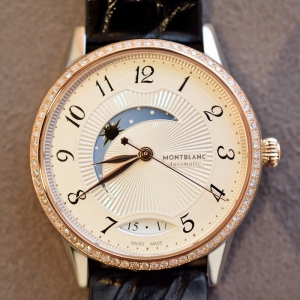 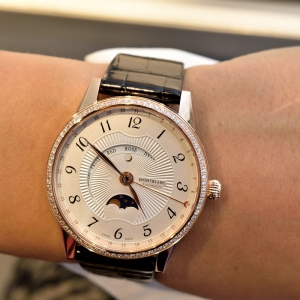 Girls don’t just wanna have fun – Part 16, SIHH 2019 edition In this series we showcase mechanical and artistic wonders that were especially designed for women and others originally for men that come alive on spirited ladies’ wrists. 2019 brought new options for women demanding artistic and technical excellence in a timepiece. I selected a few from those presented at the SIHH.#MakeSwissMadeGreenAgain With the iceberg-pure ‘Concept’ watches H. Moser & Cie has captivated me years ago. The novelties in 2019 at SIHH include fantastic Concept pieces in the Swiss Alp, Endeavour and Venturer lines.About heritage and future with Stéphane Belmont from… SIHH gives us the chance to encounter many interesting minds working either on the creations and / or influencing the present and the future of a brand. In the magical forest of Jaeger-LeCoultre at the SIHH2019 we met with Mr Stéphane Belmont, Heritage & Rare Pieces Director at Jaeger-LeCoultre.