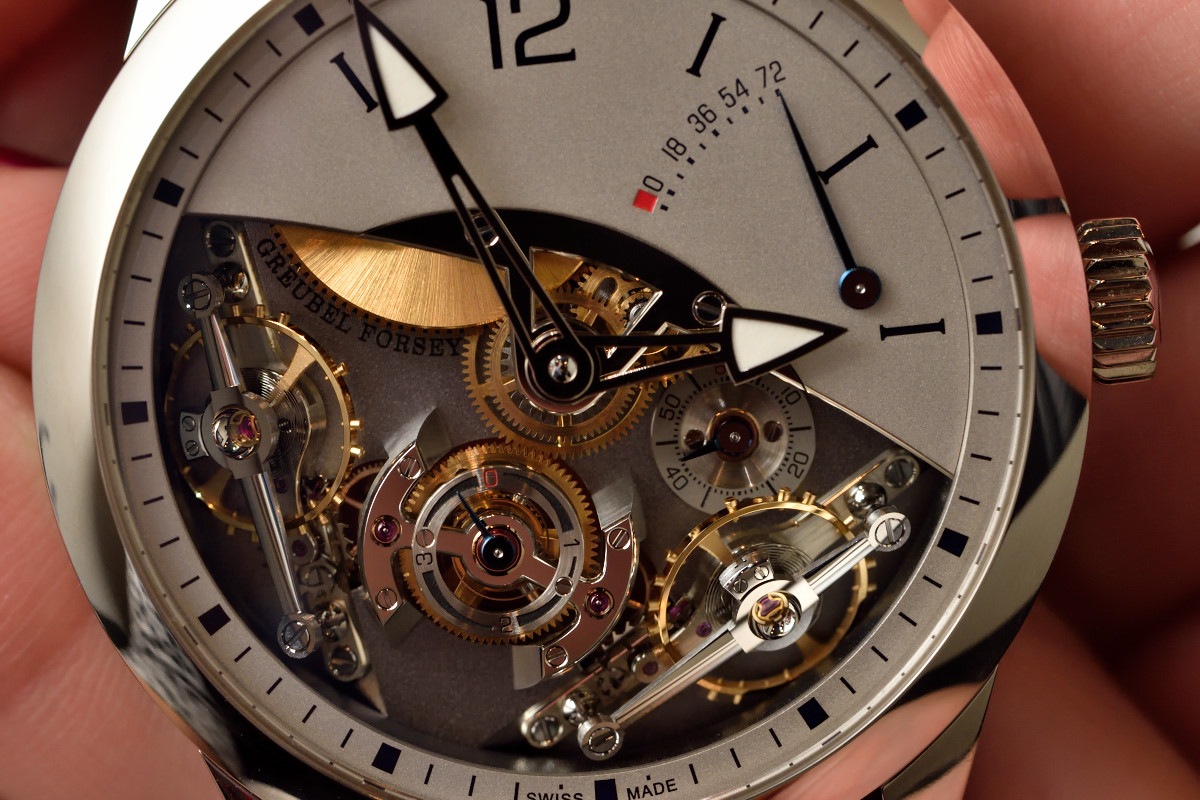 A huge missing part from Greubel Forsey’s new timepiece that looks to have been bitten out by a razor sharp jaw lent an undisturbed view to the complex world of Robert Greubel and Stephen Forsey underneath the dial. The thoughtfully arranged system of interconnected wheels and springs seem to be part of an incredible eternal machine. The whole thing looks like the palace of wonders in a theme park offering serious entertainment and a little disturbance away from the outer world. And just as I instantly reverted back to being a kid again, I wondered if watchmaking on such a creative level with all the playful challenges that one erects for the sake of overcoming them is a way to avoid getting old?

What is certain, is that visiting the Greubel Forsey funfair is a highlight each time and we always leave considerably younger. The company’s booth at SIHH hid three plus one novelties in 2016.

The mechanism found under the aforementioned dial is a precision instrument designed to tick and turn in a way that preferably no seconds are lost or gained over the course of the day. Therefore, what seemed to be two carousels are in fact a serious move towards accuracy in the form of double inclined balance wheels. Their angles with the platform are set so that they leave less chance for the balance spring to take up a vertical position when the watch is laid still. And the less it stands straight, the less gravity pulls it down stretching the spring, which would impact the performance.

However, they’ll beat naturally with slightly different frequencies and this is where the constant force differential comes into the picture (right in between the balance wheels). The unit takes these frequencies and by being linked to the wheel train, it releases the power of the main spring to the rhythm of their average.

On top of this, since torque is lost as the mainspring loses tension, Greubel Forsey built a spring driven constant force mechanism into the differential. 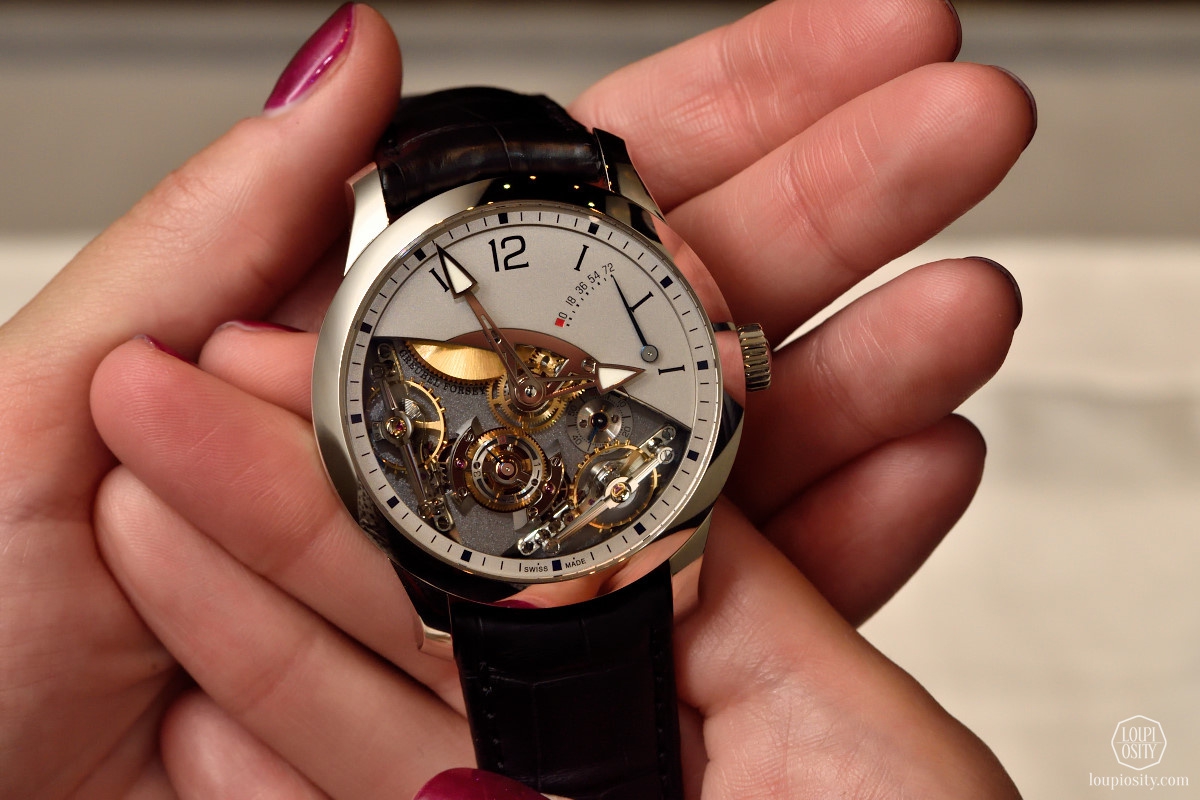 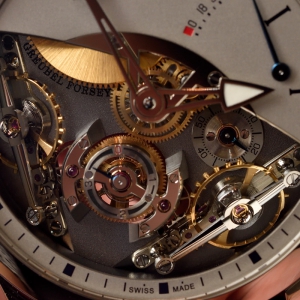 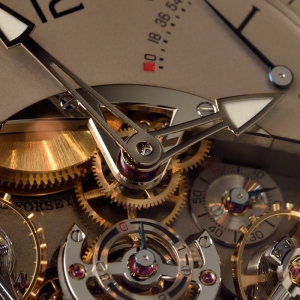 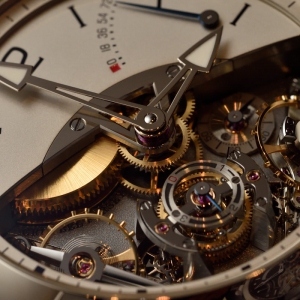 When I first saw the Tourbillon 24 Secondes Vision I initially thought that I was not given a Greubel Forsey watch – I could see no large openings, schools of wheels, barrels and light-tower-inspired hand stands. However, the slipping light on the fantastically finished curved tourbillon bridge and the delicate enamelled indexes on the solid gold dial made it clear how wrong I was. It was just another unusual timepiece from the playful creators, which deserved the golden hand of Grand Prix d’Horlogerie de Genève last November.

Beyond the infinite care which mirror polished the bridge of the 24 seconds tourbillon and treated all the visible and invisible elements to the maximum, designers spent a considerable amount of time shaping a tricky dome home from sapphire for the tourbillon. They made it so as to extend it in the back and to fall between the two bones in the lower arm ulna and radius, which offers top comfort and sufficient space for the moving regulator, too.

Inspired perhaps by the Aiguille d’Or, the manufacture casted the model for the 2016 SIHH from red gold. 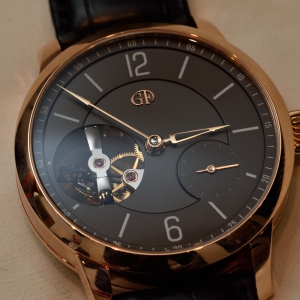 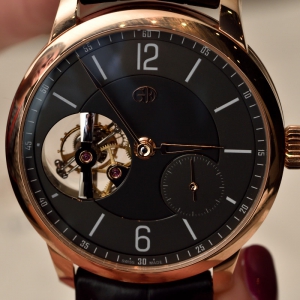 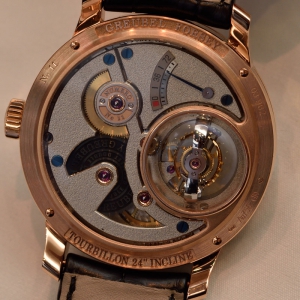 The company, probably respected univocally out there, has left its signature on contemporary fine-watchmaking for sure. Projects such as “Naissance d’une Montre” that Robert Greubel and Stephen Forsey performed together with Philippe Dufour and Michel Boulanger to revisit the forgotten watchmaking tools and techniques, make their impact even greater. At the SIHH we saw the finished prototype produced by Michel Boulanger (auctioned at Christie’s Hong Kong in May), which will be followed by 10 other siblings later on. We discussed the project with Stephen Forsey here. 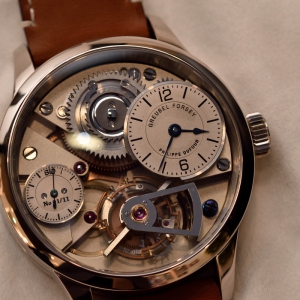 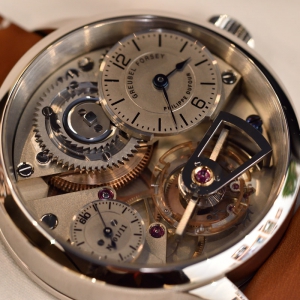 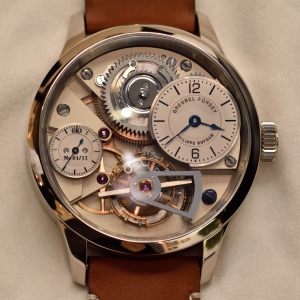 This year another quest was started to blend the genes of the brand with the individuality of their watchmakers. The new Signature series will include models built out of Greubel Forsey components, according to their standards and will carry their savoir faire, however, designed and produced by one of their super talents who will enjoy a considerable amount of freedom during the project.

Signature 1 was co-created with Didier J.G. Cretin. It became the smallest diameter timepiece to carry the Greubel Forsey name and – besides the Vision – is one of the simplest looking too. As opposed to previous models, it’s not complicated with a tourbillon, but puts a beautiful and large 2.5 Hz balance wheel in the centre of attention. The dial is presented similarly to that of the Vision: gold with engraved indexes and enamelling.

There will be 66 pieces made altogether in gold and platinum, and for the first time the batch will also include 33 timepieces in stainless-steel. 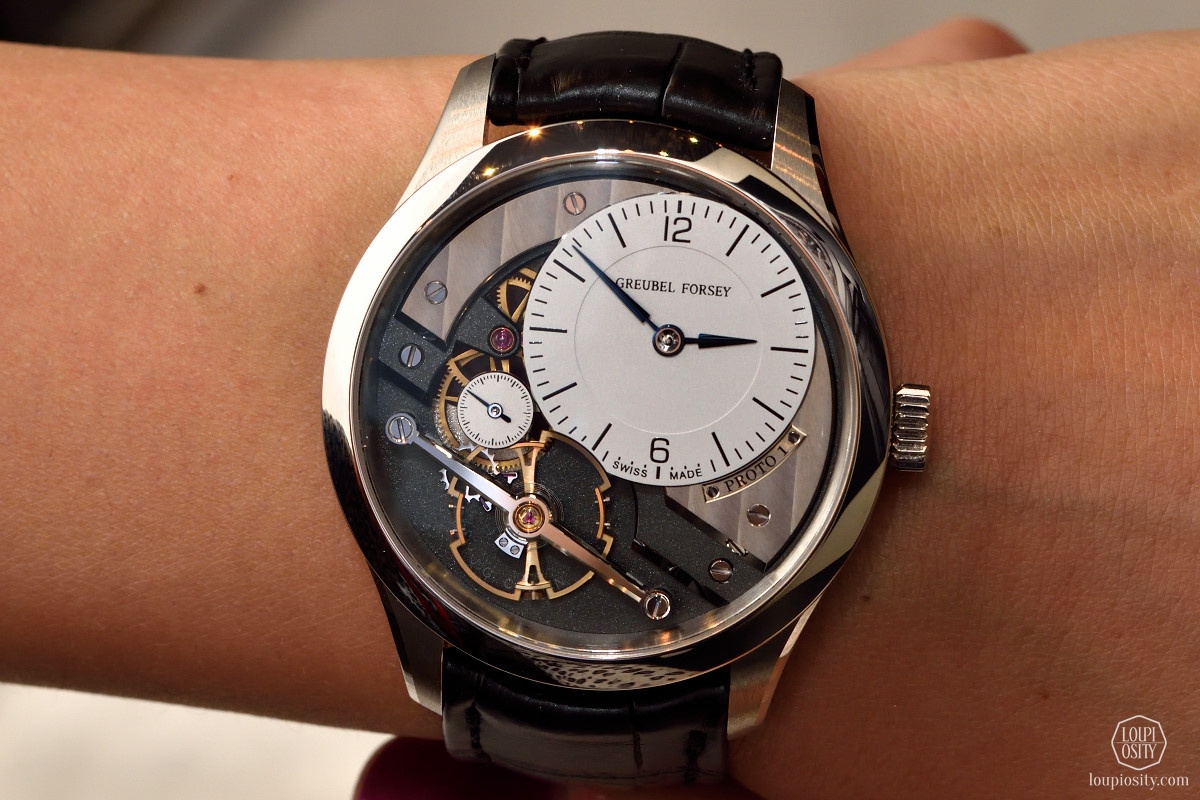 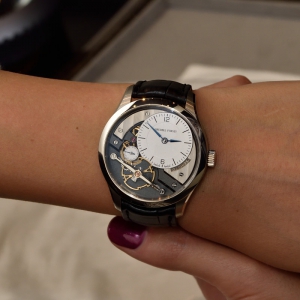 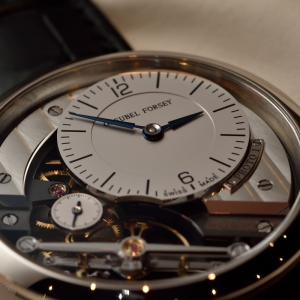 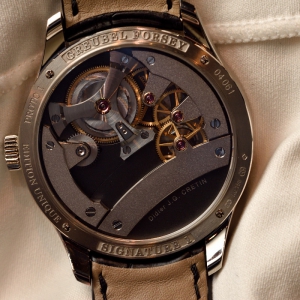