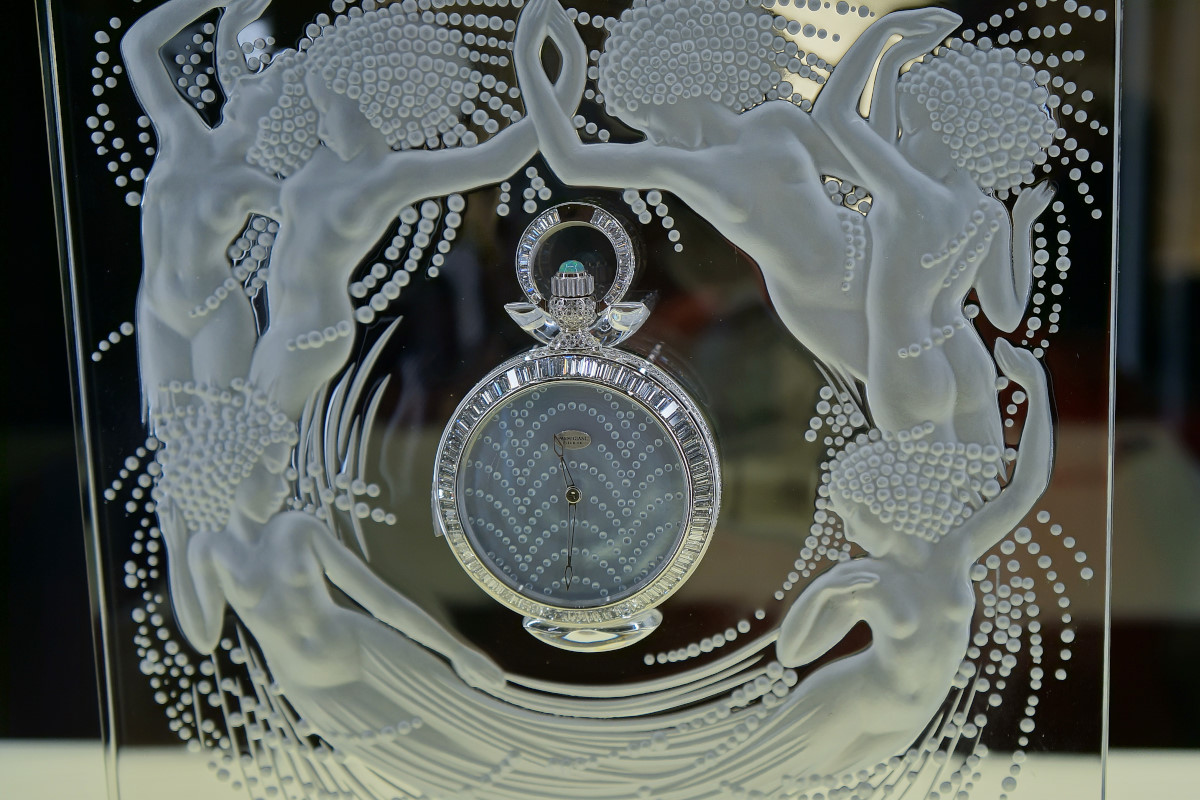 René Lalique was one of the most decisive Art Nouveau artists, his jewellery and household objects are celebrated world-wide to this day. René was born in 1860 and died in 1945, thus he lived through the industrialization of Europe, the turn of the century and both World Wars. The young Lalique participated in various artistic trainings in Paris and worked as an apprentice in Louis Aucoc’s jewellery workshop in England. He also worked for companies such as Cartier before opening his own boutique in 1890. Lalique achieved his first significant, international success with his jewellery that was the sensation of the 1900 Paris World Expo. He continuously developed the glass technique used in his jewellery and applied it to other objects. From 1902 he worked with glass in clairefontaine’s home on a manufacture level, but soon opened a factory in Combs-la-Ville. Lalique developed numerous ways to use and manipulate glass in order to use as the material in as many ways as possible. (An interesting fact: during WW1 his factory mainly produced objects that were practical and useful at the time of war, for example glass vials, bowls and ampoules for medical and pharmaceutical use.) In 1921 Lalique’s new factory was inaugurated. The new venue stayed true to his principles, and considered the aesthetics of everyday objects paramount.

The Soleil de Gaïa clock and the Serpent clock are tributes to many pieces created by René Lalique which illustrate the themes of Day and Night. In 1926 René designed a watch, on which the night was portreyed with a woman, the day by a man, symbolic of the two forces: yin and yang. This model was the most expensive timepiece that Lalique produced and only around thirty are known to exist today. The deep blue version is the rarest; more than a decade ago there was a piece listed as an important lot at a Bonhams auction. 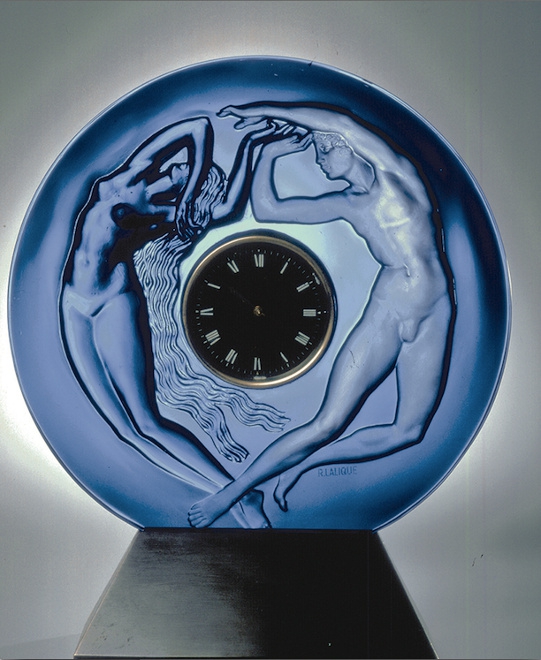 The Soleil de Gaïa Clock pays homage to the myth of Gaia; she was the great mother of all: the primal Greek Mother Goddess – creator and giver of birth to the Earth and the entire Universe. She is also associated with the Sun as she brings life through her light and radiance. The extremely delicate mother of pearl and carnelian relief marquetry on the dial evokes the sun rays in an Art-Deco inspired graphic design.

The inspiration of the Serpent Clock is also connected to mythology; Psyche was once a mortal princess with astounding beauty. The God of love, Eros, fell in love with her and carried her away to his secret palace. When Psyche’s sisters see the splendour in which she lives, they become envious, and undermine her happiness by prodding her to uncover her husband’s true identity: he is a vile winged serpent, who would devour her and her child. These serpent motifs are visible on the clock. The base is decorated with engraved cube motifs on 3 levels, on top of which are three intertwining serpents in mother of pearl relief marquetry and yellow gold, with little emerald eyes.

Both clocks house a Parmigiani movement, indicate hours, minutes and seconds with perfect reliability thanks to the series-mounted double barrel. The double barrel considerably increases the movement’s autonomy to give a power reserve of 8 days.

The Toric Lépine, a unique collection piece by Parmigiani Fleurier and Lalique was at the entrance of the Parmigiani booth, demonstrating the haute horlogerie and jewellery making expertise of the manufacture. The crystal object includes a removable pocket watch, setting with 316 round diamonds and 220 baguette-cut diamonds; it is an art piece in itself.
The main motifs on the clock are in the shapes of Arethusa, meaning “the waterer”. In Greek mythology, she was a nymph. Around her we can see the Art Deco’s iconic Coutard motif, a succession of water droplets. The original was created by René Lalique in 1935 for the Fontaine de Coutard. Seen from the back; the Toric Lépine depicts the nymph’s face framed by two fish, appearing on the rear medallion of the pocket watch. This unique platinum timepiece houses a Quaestor movement,with a minute repeater which chimes the hours, quarter-hours and minutes with a uniquely pure melody. 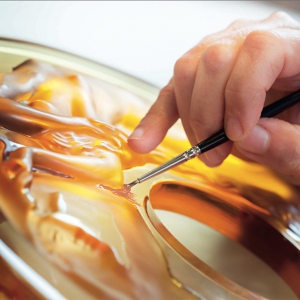 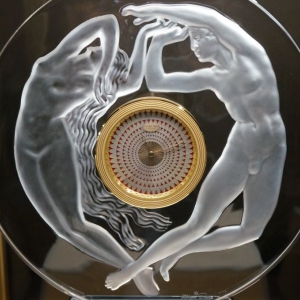 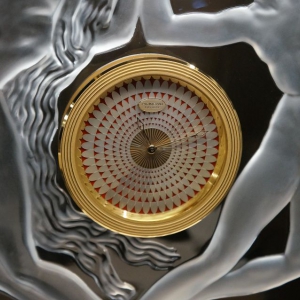 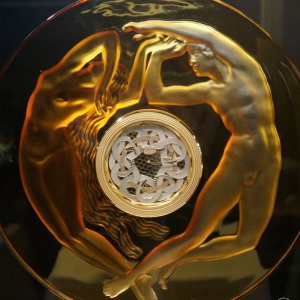 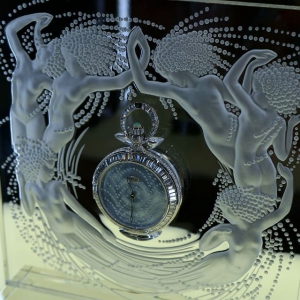 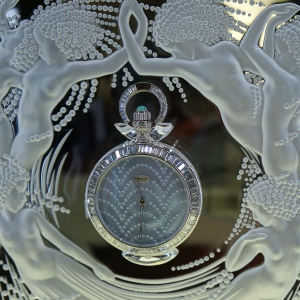 Photo credits: Parmigiani, Loupiosity.com.
All registered trademarks are property of their respective owners.
All rights reserved.

Important Modern & Vintage Jewels auction by Antiquorum Antiquorum - established in 1974, Geneva - is well known for its niche in the auction world by offering collectors’ timepieces worldwide. Now the auction house has stepped in a new territory with its first jewellery auction. We visited them prior the 11 November sale.Girls don’t just wanna have fun – Vacheron Constantin, Part… In this series, we showcase mechanical and artistic wonders that were specially designed for women and others originally for men that come alive on spirited ladies’ wrists. Vacheron Constantin presented wonderful novelties to women at the online Watches and Wonders event in April. Finally, we were able to try them on.MB&F Legacy Machine Perpetual Palladium We previewed the MB&F Legacy Machine Perpetual Palladium at the Geneva Watch Days 2021 - discover it with us.