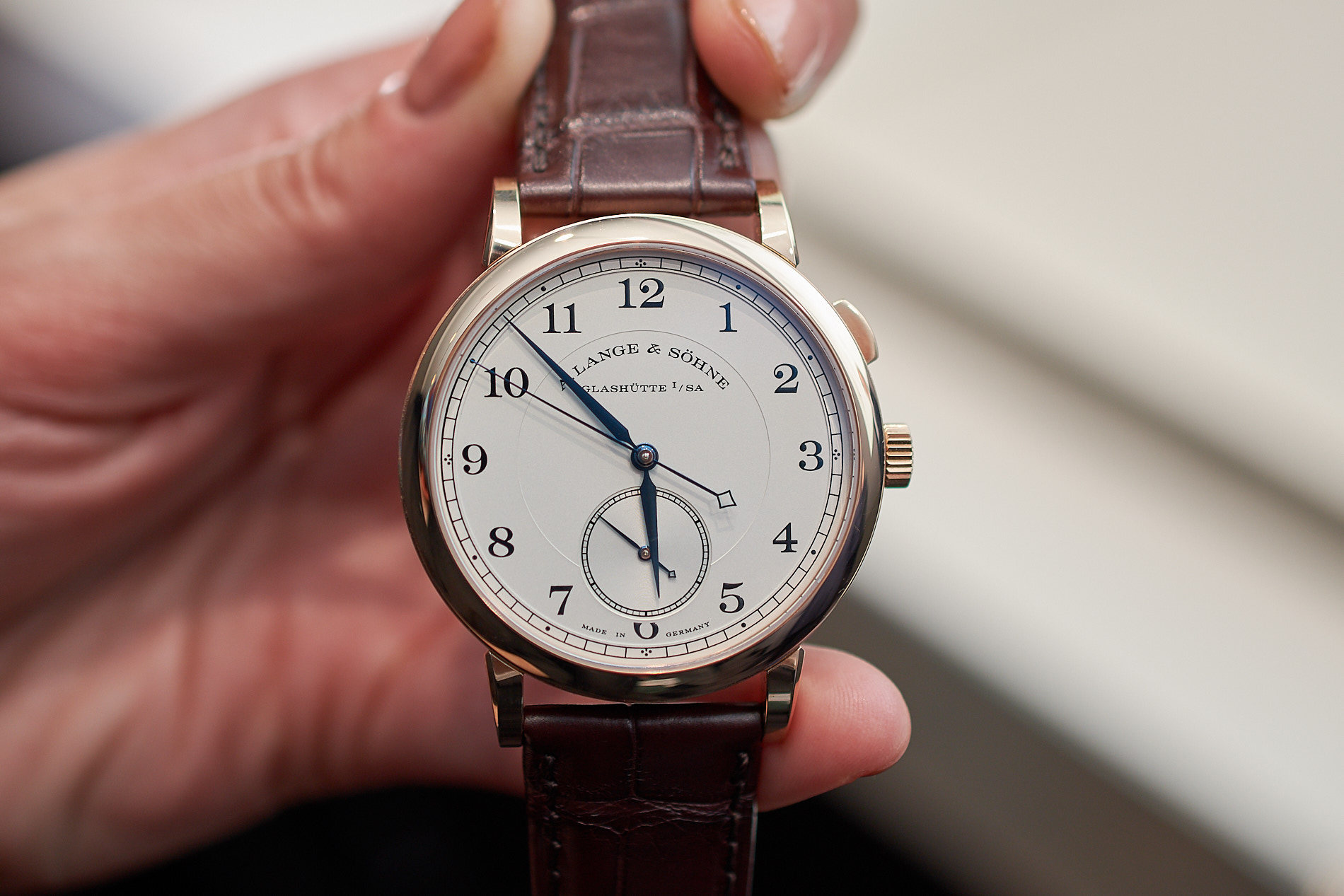 One of the greats of modern fine watchmaking, Walter Lange passed away last year at the age of 92. As a tribute to his legacy, the company presented a model with his most emotionally bound complication that his great-grandfather Ferdinand Adolph Lange designed, the stoppable jumping second.

In 2015, at the 200th anniversary of the birth of Ferdinand Adolph Lange, many events covered the story of the founder and A. Lange & Söhne – one of them was the evening and the exhibition at the Zürich boutique of Les Ambassadeurs. Historic and contemporary pieces in displays gave a glimpse into A. Lange & Söhne’s past and present – we wrote about the history of the company and Walter Lange in this article.

The new 1815 “Homage to Walter Lange” features a new calibre: the L1924 (the name in itself is derived from Walter Lange’s year of birth – 1924) that incorporates the stoppable jumping seconds mechanism.

Anthony de Haas, Director of Product Development, gave a moving explanation as to why they chose this mechanism to commemorate Walter Lange. Even when Mr Lange was withdrawn from daily operational work, he was very keen to dedicate time to the young generation and immerse himself in the novelties when he was at the manufacture. As Mr Haas remembered, he always enjoyed taking the more and more complicated models in his hands, but kept on missing an emerging model with his great-grandfather’s stoppable jumping second design throughout the years. When he held the Richard Lange Jumping Seconds which the company brought to SIHH in 2016, he commented “nice, but still not my great-grandfather’s mechanism”. Therefore, when he passed away during SIHH 2017 it was no question for those who respected him the most to pay tribute to Walter Lange with the simple and classic 1815 and the exact implementation of the 150-year-old jumping second design.

The idea of the mechanism dates back to an 1867 invention by his great-grandfather, Ferdinand Adolph Lange, which was first implemented 10 years later in a masterpiece crafted by his grandfather, Emil Lange. The second hand jumps sharply when it is supposed to and can be stopped and started, but not reset. The 3Hz balance wheel would normally make the second hand take 1 second in 6 steps. By employing a 6-pointed star wheel with a special tip that can liberate a tensioned lever, 5 beats will be kept “invisible”. They will not move the centre hand, but the 6th will instantly advance it to the next second marker.

The design of the watch is very classical – it has a railway-track minute scale, at 6 o’clock a small sub-dial with non-jumping second and in the centre the blue jumping second hand. The pusher at 2 o’clock activates the start and stop function.

The piece will be available in limited editions in white gold (145 pieces), pink gold (90 pieces) and yellow gold (27 pieces, it interesting to know that Walter Lange wore yellow gold watches). The special limitation numbers have a unique reason; marking important milestones in the history of the company; “From 7 December 1845, when Ferdinand Adolph Lange originally established the company, exactly 145 years elapsed until 7 December 1990, the date on which Walter Lange registered Lange Uhren GmbH. 27 years will have passed between this date and 7 December 2017, the day on which the new model that pays tribute to Walter Lange is being unveiled.” 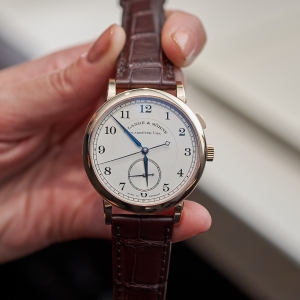 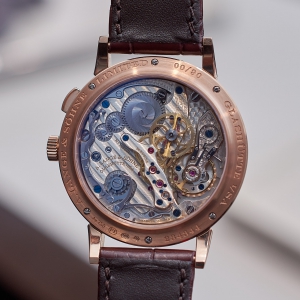 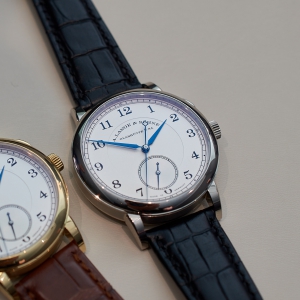 Furthermore, a single, very unique stainless steel edition (A. Lange & Söhne don’t really do steel watches otherwise) with a black enamel dial has been created and has been reserved to be auctioned off by Phillips at the Geneva Watch Auction: SEVEN on 12 May, in Geneva at La Reserve Hotel. All the proceeds from the auction will be donated to support the Children Action foundation, a Swiss charitable foundation. 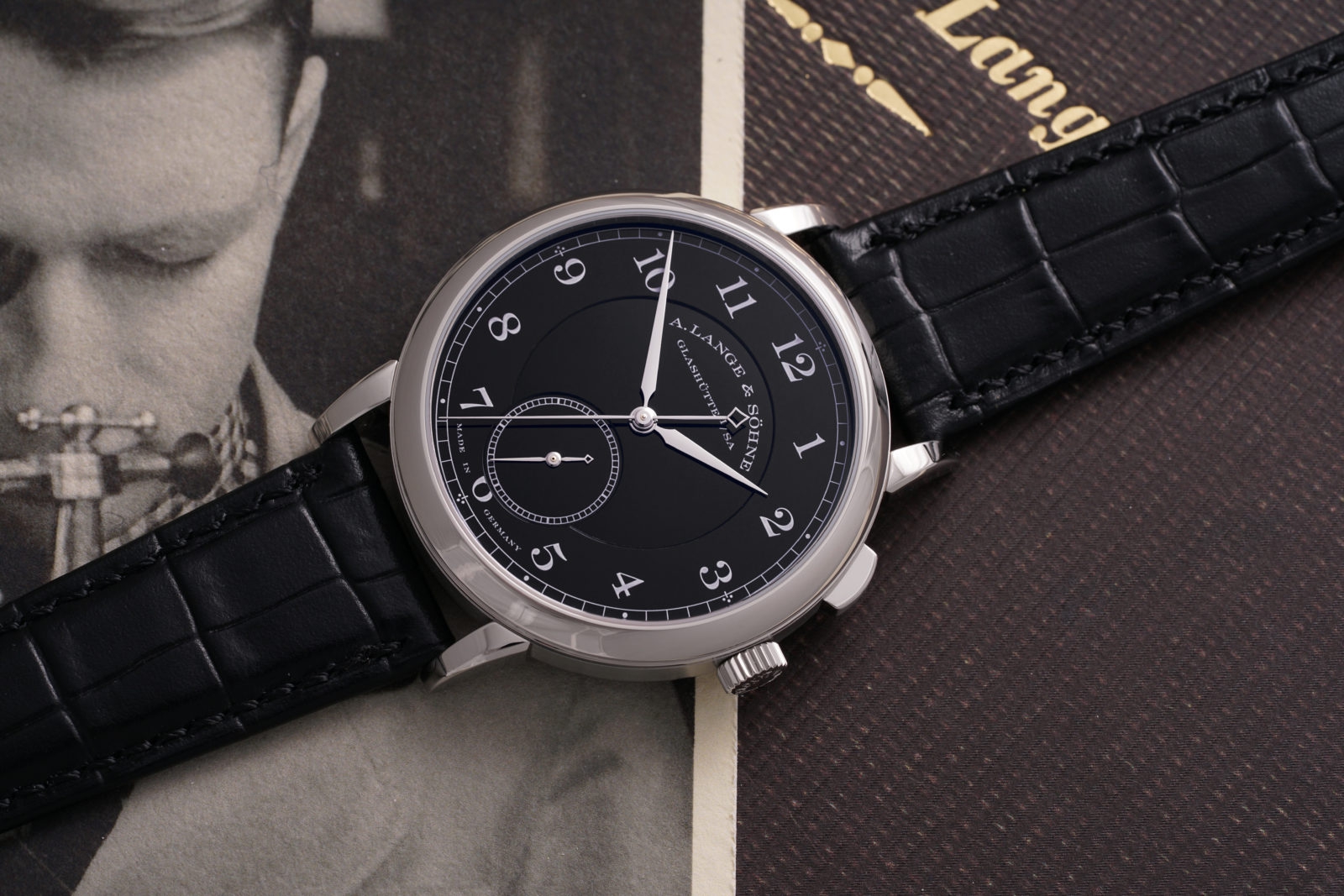 If you would like know more about the pieces and the legacy of Walter Lange, A. Lange & Söhne made an interesting video with Wilhelm Schmid (CEO, A. Lange & Söhne), Aurel Bacs (senior consultant, Phillips in Association with Bacs & Russo), Elizabeth Doerr (editor-in-chief, QuillandPad.com), Gary Getz (collector) and Robert Hoffmann (watchmaker A. Lange & Söhne).

Photo credits: Phillips – A. Lange & Söhne, Loupiosity.com.
All registered trademarks are property of their respective owners.
All rights reserved.