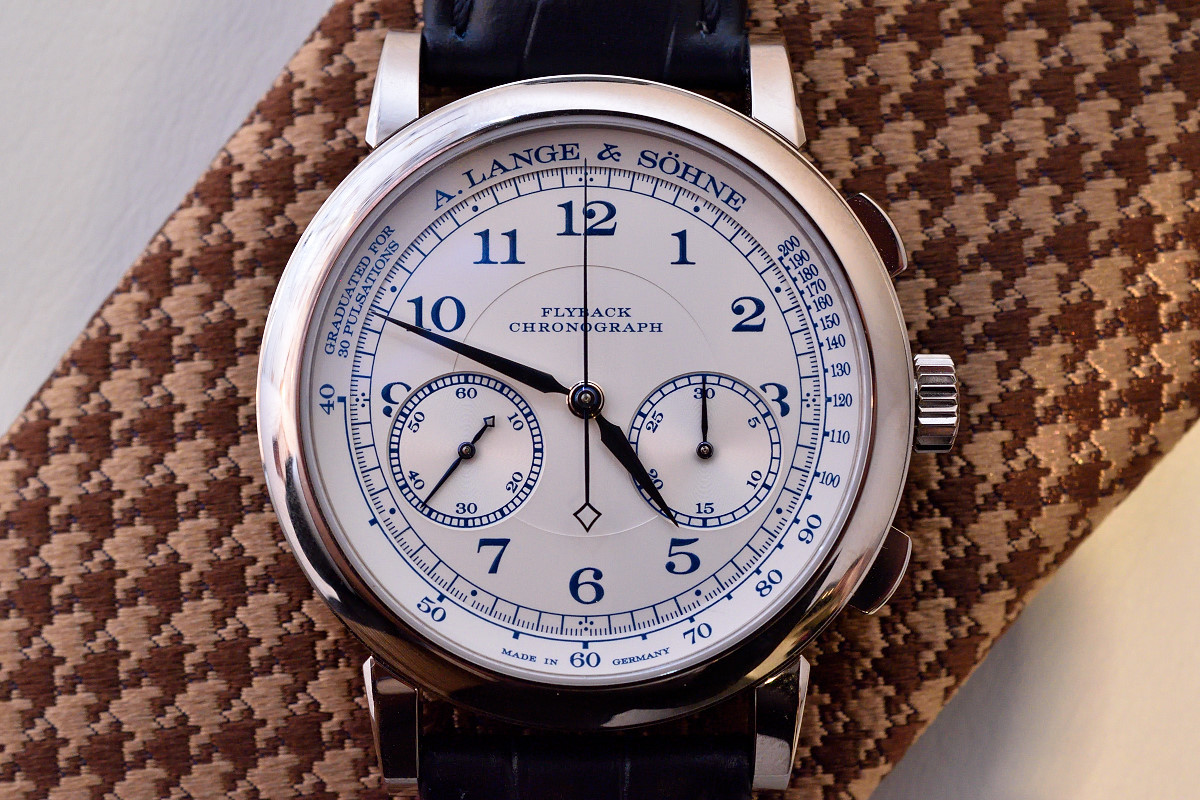 “The Swiss make the best watches… they say” – Wilhelm Schmid, CEO of A. Lange & Söhne started off the evening, at Les Ambassadeurs commemorating the 200th anniversary of the birth of the founder, Ferdinand Adolph Lange. What the 19th century watchmaker achieved is no less than to establish the German hub of fine watch making, which thanks to people like his great-grandson Walter Lange survived wars and communist expropriation. In fact, Glashütte, the once silver-mining little village in Saxony is undoubtedly on the route of development today. The international achievements and its importance for Germany is well shown by the fact that Bundeskanzlerin Angela Merkel recently inaugurated the new manufacturing facilities of A. Lange & Söhne.

Les Ambassadeurs invited collectors for a special evening with Wilhelm Schmid, transforming the entire multi-brand store to an A. Lange & Söhne boutique for one night. The many displays gave a glimpse into the watch company’s rich past and presence though various historic and contemporary pieces. On the occasion, Joachim Ziegler CEO of Les Ambassadeurs greeted the watch brand and the collectors. 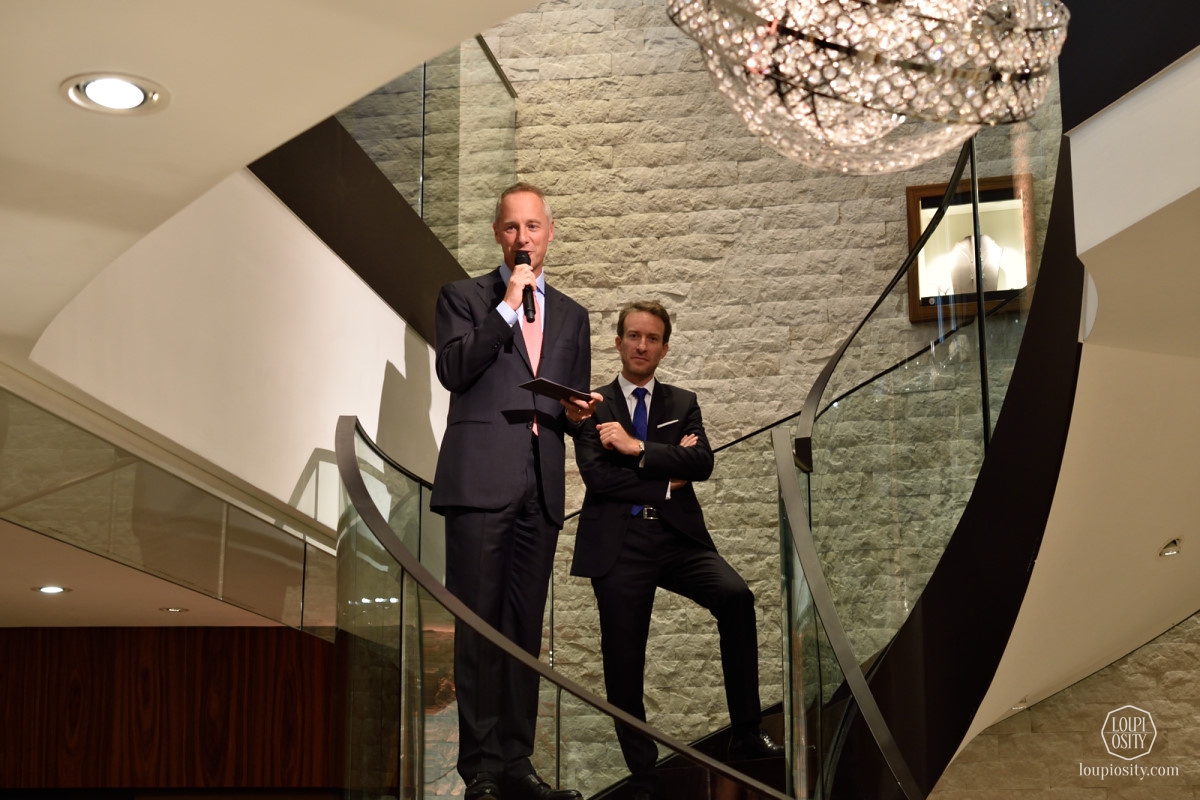 The company was established by Ferdinand Adolph Lange in Glashütte, Saxony, in 1845.

The story of today’s Saxony reached back to the 12th century. They acquired numerous titles and rights over the centuries and the silver mines brought wealth to the region. Napoleon suffered a great loss here in 1813 in the Leipzig “Battle of the Nations” which meant the end of reign in Germany and Poland, and paved the way for his exile to Elba in 1814.

The city of “Glaßehutte” (Glaß = glass; Hutte = smelter) was first mentioned around 1445, it was known for glassmaking.

Ferdinand A. Lange (1815–1875) was born in 1815 in the midst of these turbulent times. Ferdinand studied at the Dresden Technical University (Technische Bildungsanstalt) and during his studies, was an apprentice in the workshop of Johann Christian Friedrich Gutkaes, a well known watchmaker of the time. The master soon recognised the talent of his apprentice and included him in one of his most important projects. His workshop engineered the famous Five-Minute Clock for the Semper Opera House in Dresden. (A quick side-note: this was one of the first digital clocks in the world, the spirit of which is smiling at you through the large date windows of contemporary A.Lange & Söhne timepieces.)

In his apprentice years, Ferdinand travelled a great deal to England, Switzerland, and Paris to study and recorded a journey- and workbook. He returned to Dresden around 1841 and married Gutkaes’ daughter, Antonia. Being a young man of an entrepreneurial inclination Ferdinand did everything in his power to receive funds “to establish a new trade sector for the poor people of the Ore Mountains”. His ideas were mostly shaped by his experiences in Switzerland, and he wished to establish a community of manufactures based on what he saw there. In 1845, the Royal Saxon Ministry of the Interior finally agreed to lend support and the company was founded. At the end of the year he moved to Glashütte and invested everything he owned in his new manufactory.

Another important innovation was the introduction of the metric system in watch making. During his travels, Lange found the conversion of various units rather cumbersome. He was well ahead of his time, for it was not until 1858 that the government of Saxony officially introduced the metric system. 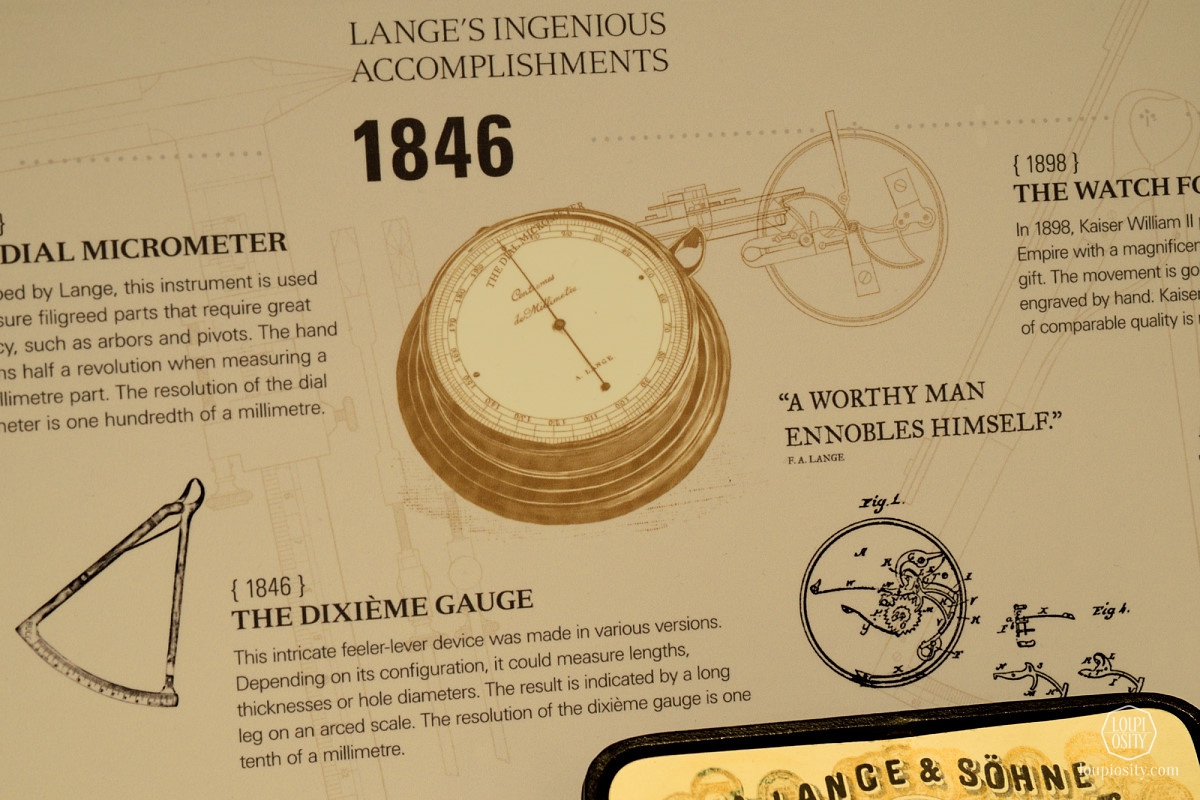 Ferdinand was not only a good watchmaker but a good manager too, he reorganized the processes, trained specialist watch masters and optimized the use of machines too.

In 1848 Ferdinand A. Lange accepted the voluntary position of mayor in Glashütte, remaining in office for 18 years. During his leadership it evolved into a prosperous, lively town, largely thanks to the watch making industry that he had initiated.

Ferdinand A. Lange was only 60 when he died on 3 December 1875, shortly before the 30th anniversary of his manufactory.

After his death his two sons, Richard and Emil took over the management of the A. Lange & Söhne. They complemented each very well: Richard was an excellent watch maker and Emil a a talented businessman. In the 1900s they produced stunning pocket watches, including the Grande Complication No. 42500, which was commissioned in 1902 by Heinrich Schäfer. The watch is unique; and it is equipped with the most intricate movement ever produced by A. Lange & Söhne. It’s very adventurous story can be read on the watch blog of Christie’s. 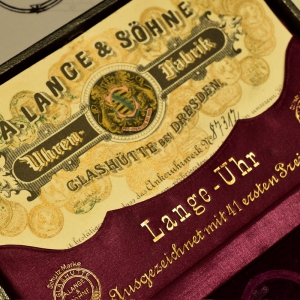 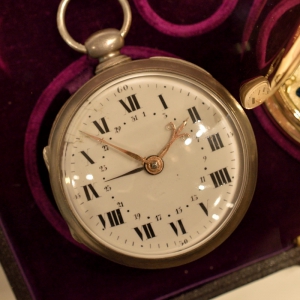 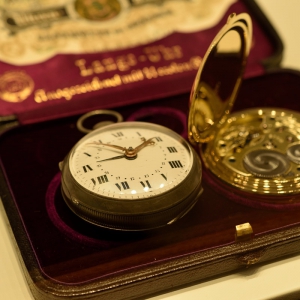 Richard Lange’s numerous novelties and developments included a lighter, elastic and thermally more resistant “metal alloy for watch springs” by using a mixture of beryllium and steel-nickel – he was awarded patent for it. (Swiss technician Reinhard Straumann of Basel, who was also conducting research into horological metals, further developed Lange’s beryllium alloy and filed another patent complete with a description of the process.)

Walter Lange, Ferdinand A. Lange’s great-grandson was born on 29 July, 1924 in Glashütte. True to the family tradition, he was trained as a watchmaker. His path in watch making was sadly interrupted by World War II. Not only his career but also the main production building was destroyed by a bomb in the war.
In the area sieged by the Soviets, the manufacture was also appropriated and Walter was sent on forced labour in a uranium mine, which he managed to escape. The family business was merged with other Glashütte firms into the VEB Glashütter Uhrenbetriebe, a state combine.

His story is deeply touching…

After the fall of the Berlin Wall, Walter attempted to revive the family heritage with his partner in this venture, Günter Blümlein. They set the date of the re-foundation to be 7 December 1990 (the original business was also established on 7 December, 145 years before), – amid exciting and finally lucky circumstances the inauguration came to pass.

In 1994, the company showcased the first four prototypes including the Lange 1. It was the first watch to incorporate an outsize date (also patented), inspired by the clock of the Semperoper in Dresden. The launch was successful and the brand started to re-conquer the hearts of connoisseurs. It is an interesting story – especially in a time much before the reign of Internet and social media – that the press conference was scheduled for 24 October but the watches were set to 25 October. They hoped that the press and journalists would work fast and that in the articles published next day, the images would show the correct date.
Since then, 40 in-house calibres were developed, which serve in the pieces of collections, such as the Lange 1, Zeitwerk, 1815, Saxonia and Richard Lange.

A. Lange & Söhne pieces are never harsh, they never elicit attention. They quietly walk a characteristic route to the wrists of future owners and collectors. These timepieces have to be understood to be really appreciated. Sometimes people come in to the boutique again and again to meet nothing else but the same watch, look at its known figure, immerse in the movements of the mechanics. Eventually they surrender. 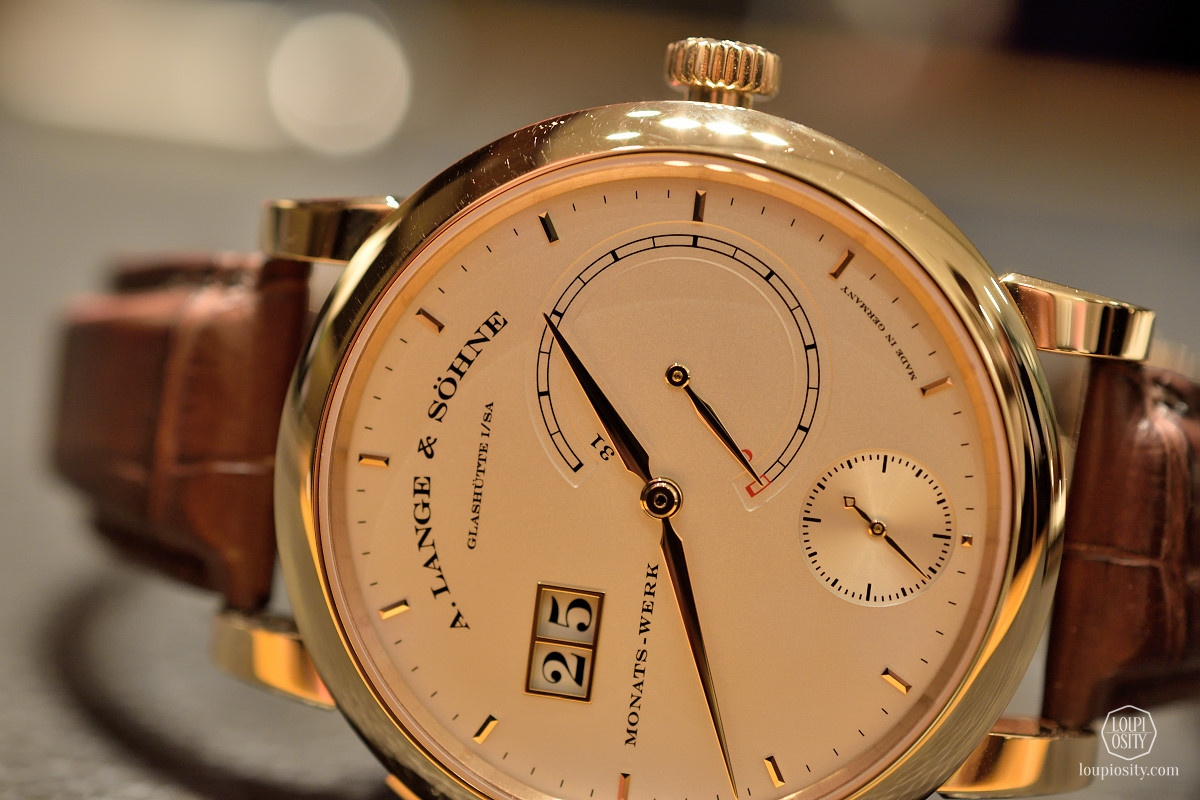 Already in Zurich many talked about the new 1815 Chronograph Boutique Edition, which would be introduced at the Watches and Wonders (30 September – 3 October) show in Hong Kong. We were delighted to hold this astonishing piece in our hands finally at the exhibition. This perfectly reserved, yet handsome watch face demonstrates how functionality meets aesthetics, modesty and self-confidence. 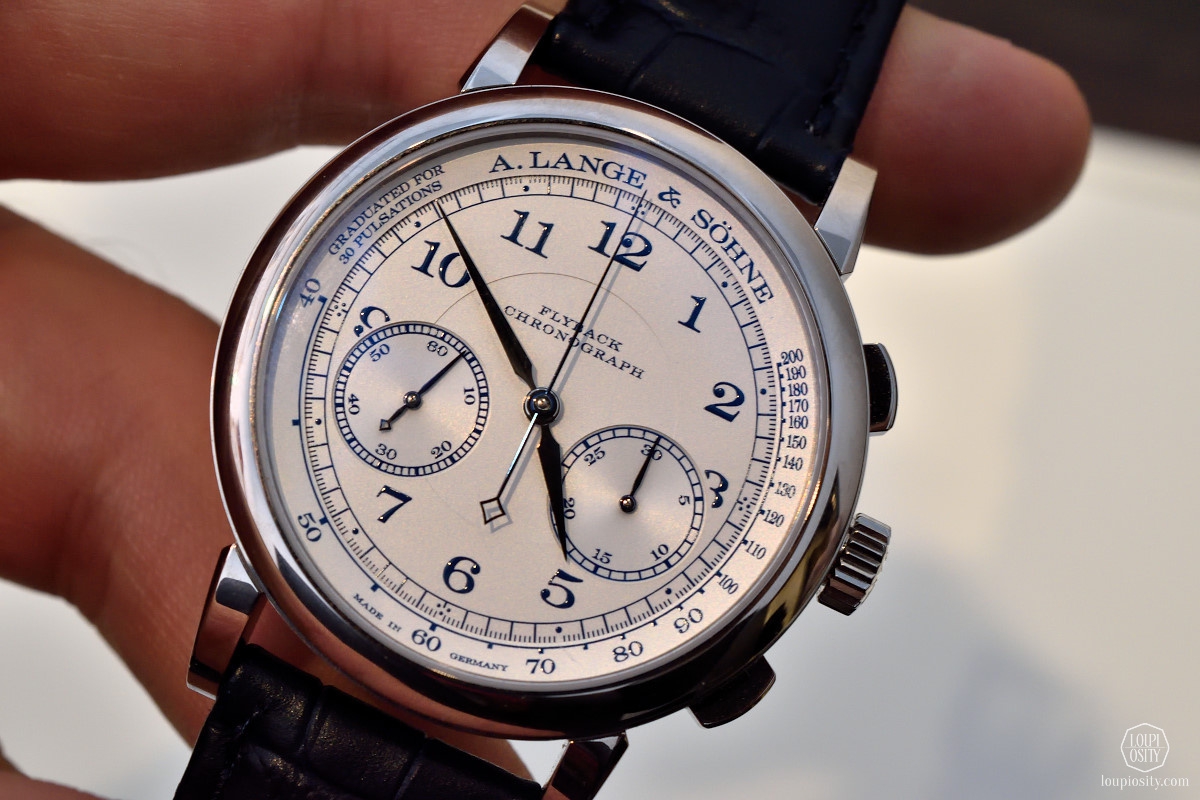 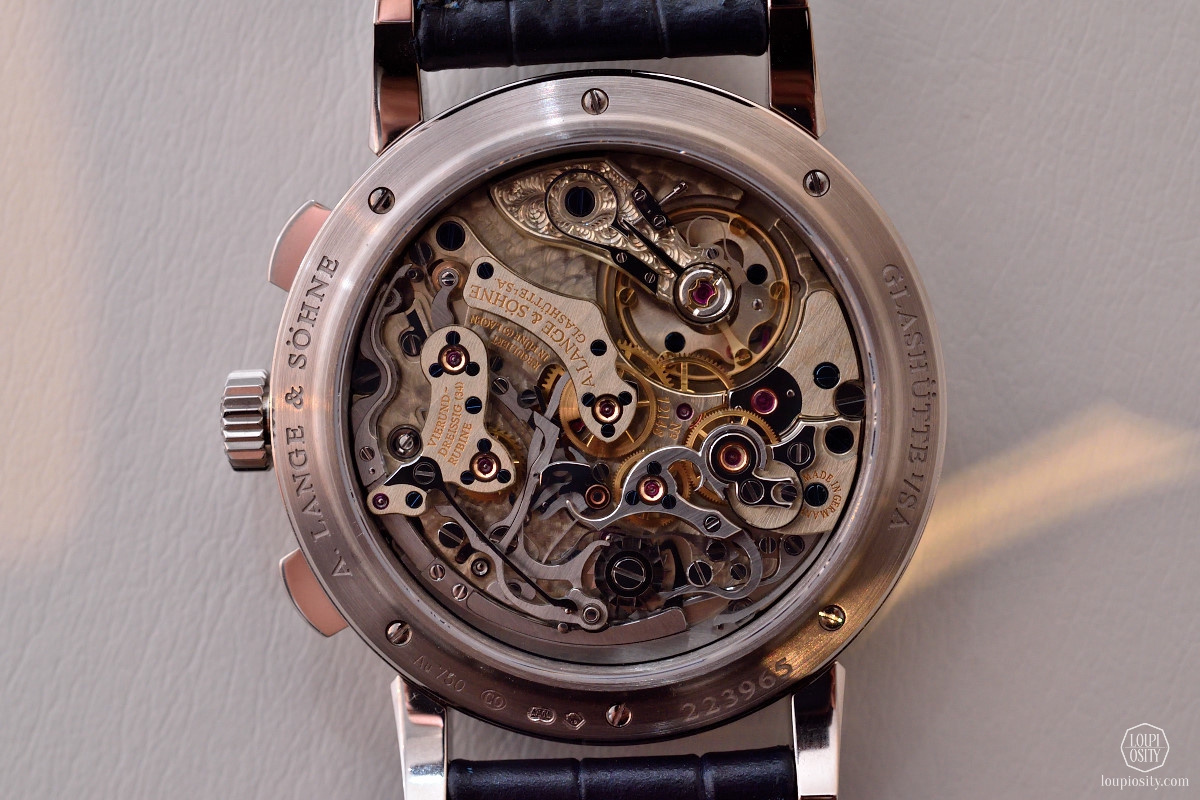 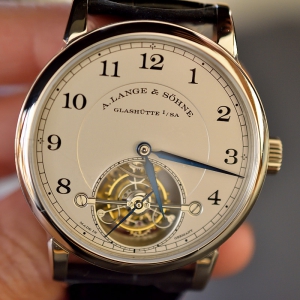 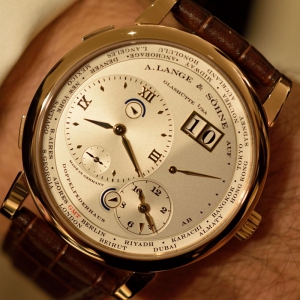 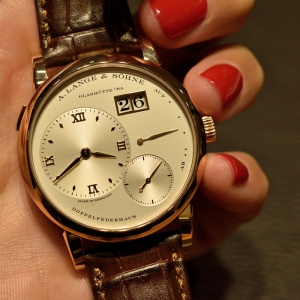 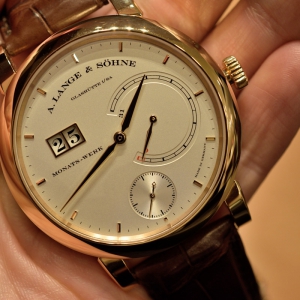 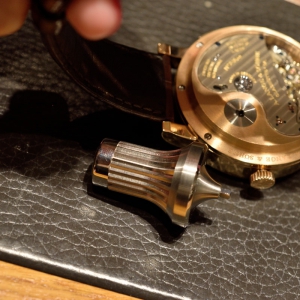 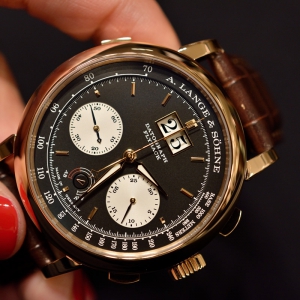 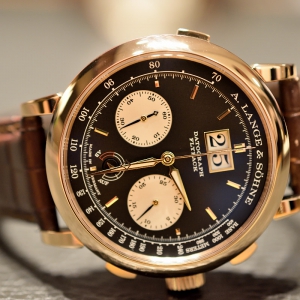 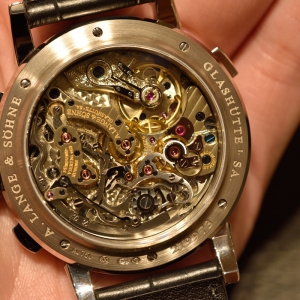 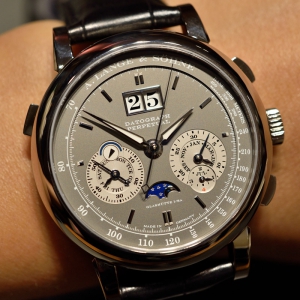 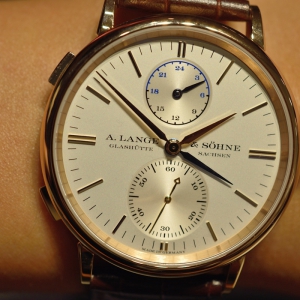 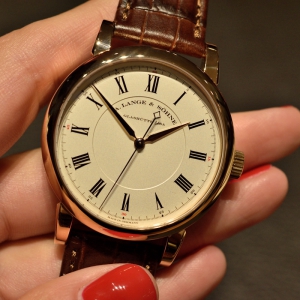 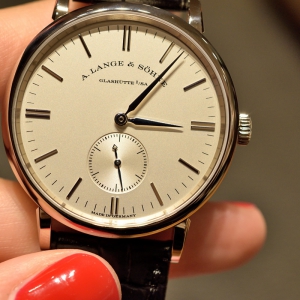 Equal Pay Day at Nomos Glashütte This March sees the International Women’s Day and the Equal Pay Day in Germany—both serve as reminders that discrimination still exists. Approaching these, NOMOS Glashütte invites all to improve gender equality by setting an example themselves.IWC Schaffhausen at Watches & Wonders Shanghai IWC Schaffhausen Portugieser Chronograph was released at Watches and Wonders Shanghai with steel bracelet.'Horological Alchemy' by Denis Flageollet Horological Alchemy: a book from Denis Flageollet is now available in English and French.