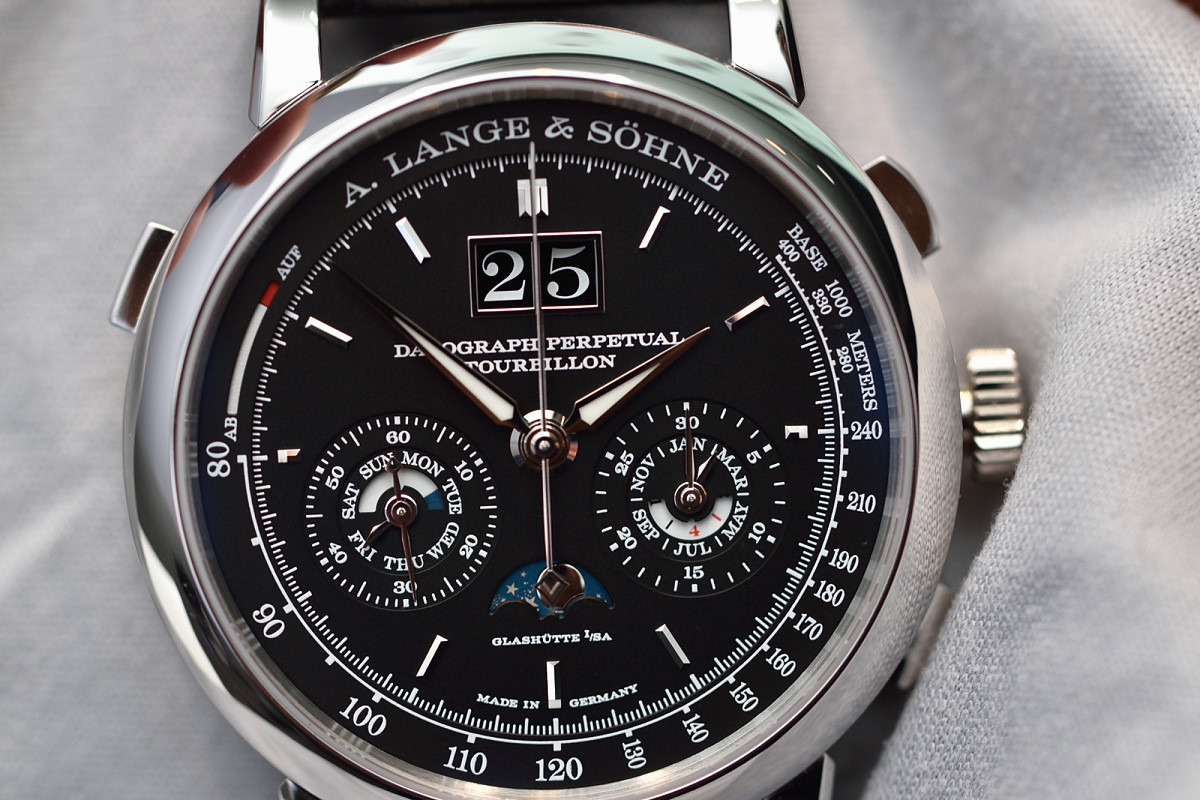 A. Lange & Söhne had a major year in 2015: on 26 August the new 5400-square-metre production complex was opened by German Chancellor Angela Merkel and Saxony’s Prime Minister Stanislaw Tillich. In Autumn the 200th birthday of Ferdinand Adolph Lange was celebrated with events such as the special reception at the Zurich boutique of Les Ambassadeurs with Wilhelm Schmid, or at the Watches & Wonders in Hong Kong.

The company’s position is rather interesting: they are German-watchmakers in a Swiss-dominated industry. The manufacture was reopened in 1990 by a very charismatic and emblematic person Walter Lange, Ferdinand A. Lange’s great-grandson. Today it is owned by Richemont, but Walter Lange can be seen at events such as the SIHH.

Although they are respected by the other fine watch companies and collectors, it is not easy to sell a Lange watch. These timepieces have to be understood to be truly appreciated. Sometimes people come in the boutique again and again to meet nothing else but the same watch, look at its known figure, immerse in the movements of the mechanics. Eventually they surrender.

This wedding dance will continue with the 2016 models for sure.

The Lange 1 was presented on 24 December 1994 in the Dresden Royal Palace in the initial collection of the reopened workshop. Probably the most “daring” among the Lange 1s is the 41mm platinum GRAND LANGE 1 “Lumen” with the classic layout and numbers, but with a whole new attitude. It has black-tinted, semi-transparent sapphire-crystal glass with special coating which blocks most of the visible light but not the UV light. The UV light “charges” the luminous pigments on the outsize-date mechanism and causes them to glow in the dark.

The lunar disc is made of glass, treated with a patented coating process and laser-cut to make the stars and the moon visible, which too glow in the dark. 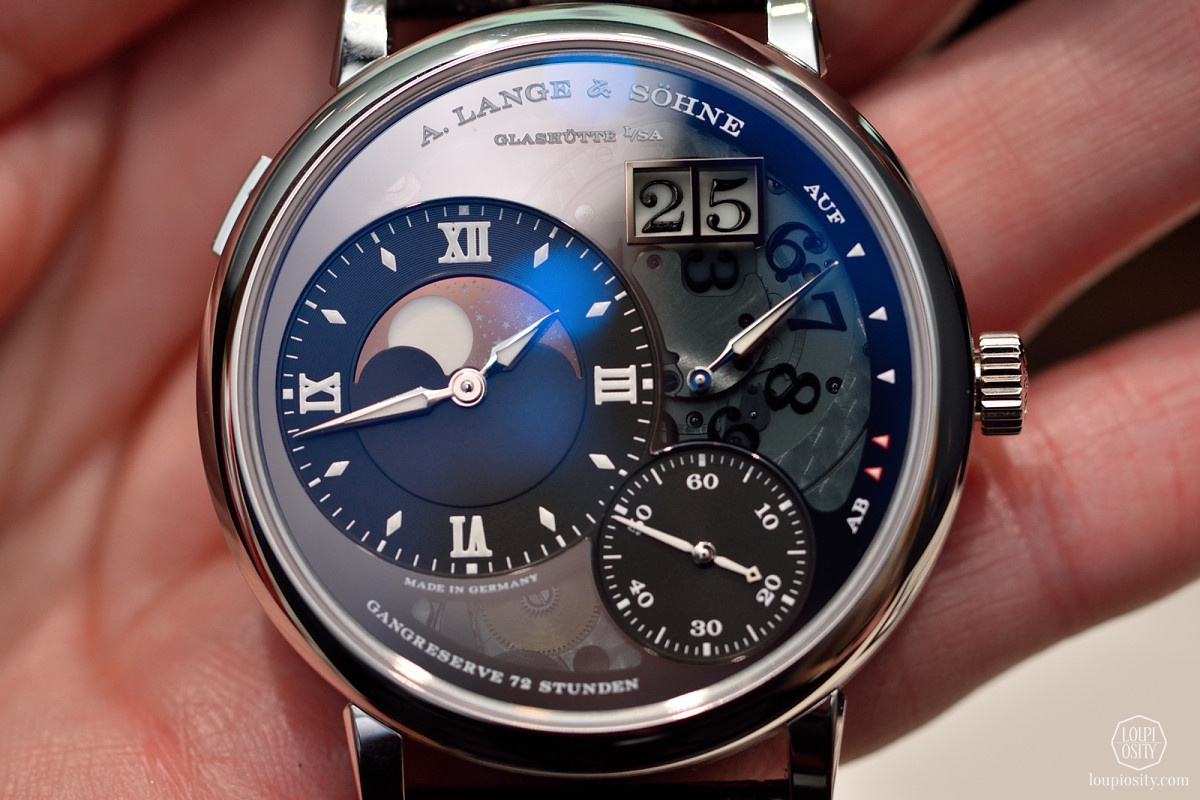 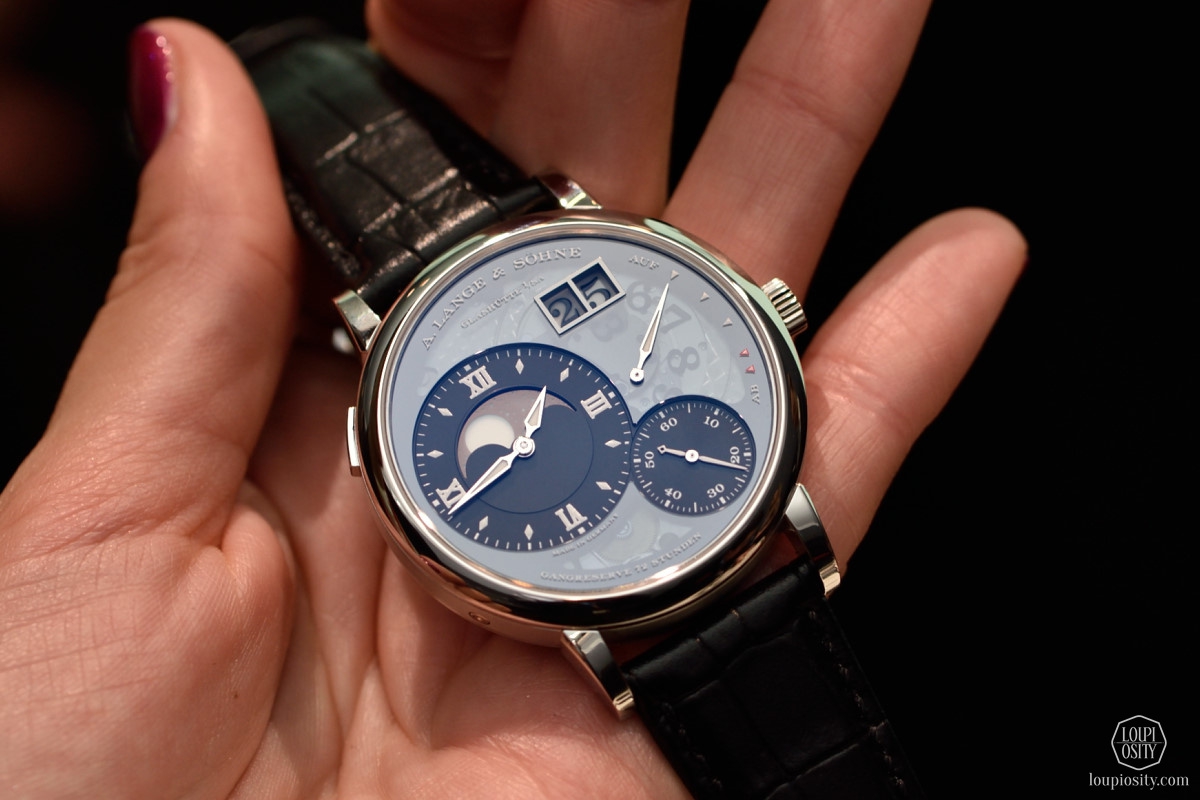 The dial design of the Richard Lange Jumping Seconds is similar to that of the Richard Lange Perpetual Calendar Terraluna but due to the combination of simpler dial paint and the ommission of the perpetual calendar displays, it looks less “complicated”. It is also much smaller in diameter, 39,9mm compared to the Terraluna’s 45,5mm.

The jumping blue-handed second stars in the greater of the three dial circles. Combined with a constant force mechanism the hand jumps precisely 60 times a minute. The jumping mechanism is powered by a second wheel train, which collects energy from the mainspring, stores it on a separate spring and releases it once every second. This makes sure that the uneven torque distribution of the mainspring is levelled out, providing superb accuracy throughout the entire running time. Such a delicate mechanism was already created by Ferdinand Adolph Lange in 1867 but this time it is paired with the jumping seconds.

Accurate setting to the reference time is aided by a zero-reset mechanism, which instantly moves the seconds hand to zero position upon pulling the crown.

The hour is displayed in the lower left sub-dial and the minute in the opposite side. In the intersection of the two there is a little curved triangle, which turns red when the remaining running time decreases below 10 hours. The total power reserve of the manually wound L094.1 calibre is 42 hours. 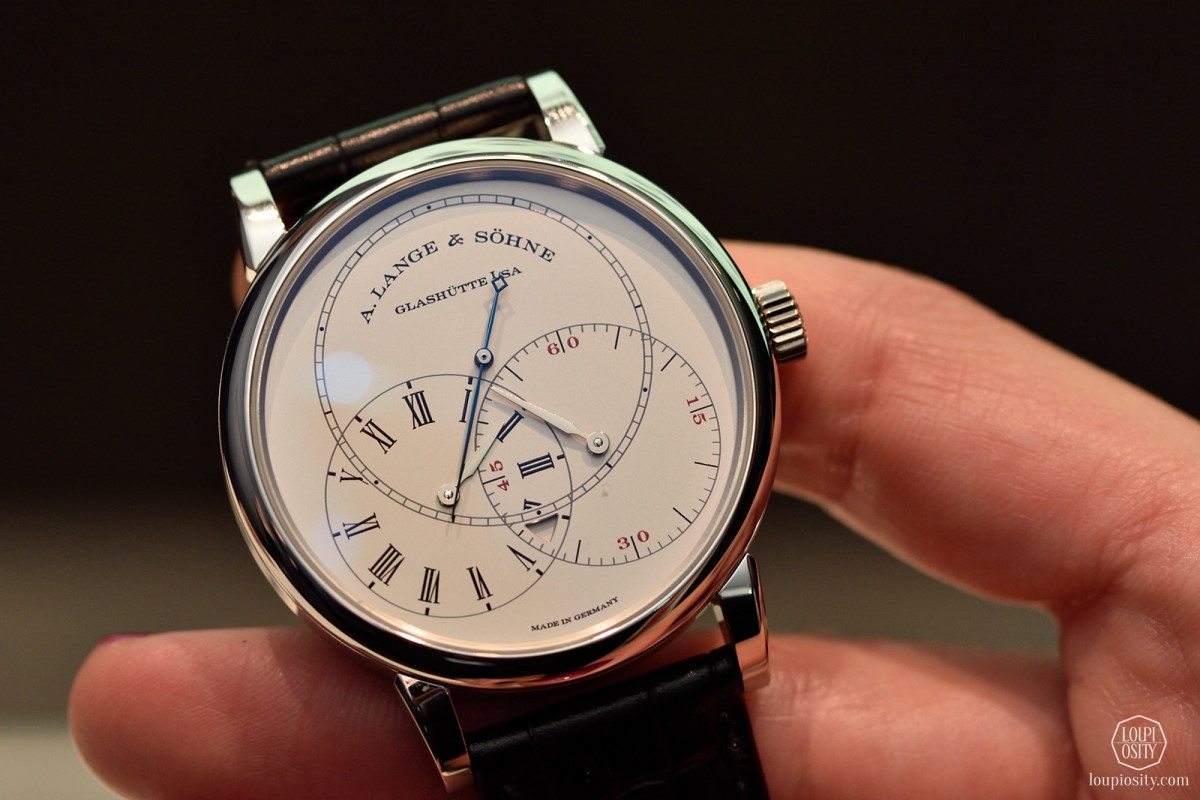 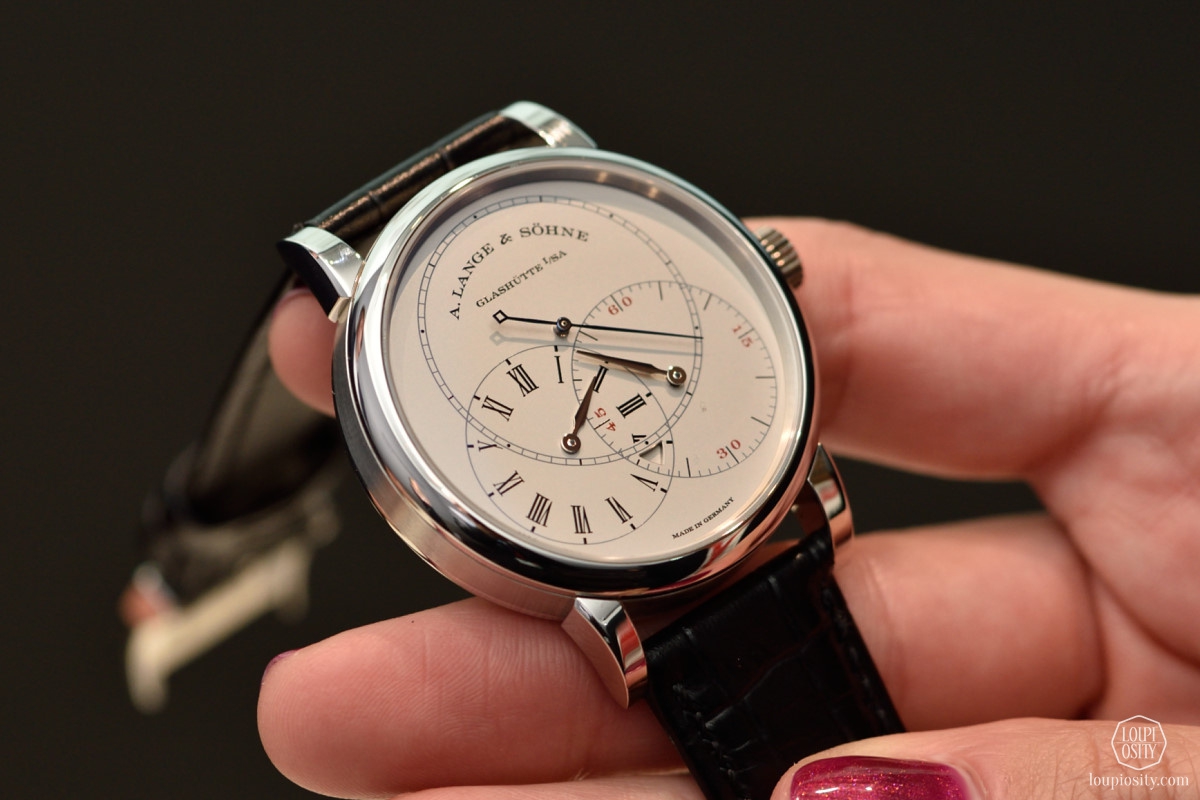 Wilhelm Schmid (A. Lange & Söhne CEO) described the Saxonia Moon phase as the brand’s most German watch in design – strong and straightforward. The outsized date window is at 12 o’clock, the moon phase display at 6 o’clock and the hours are marked with solid gold appliqués.

Moon phase is a frequent complication of the manufacture. This time the lunar disc is coated with a patented technique which gives a deep blue surface, on which fine stars are cut with a laser beam.

The classical Lange unidirectional central rotor, the high-rate stability balance spring (developed by Lange) and the typical hand-engraved balance cock of the L086.5 self-winding movement are visible on the back.

The 40mm watch is available in 18k pink- or white gold. 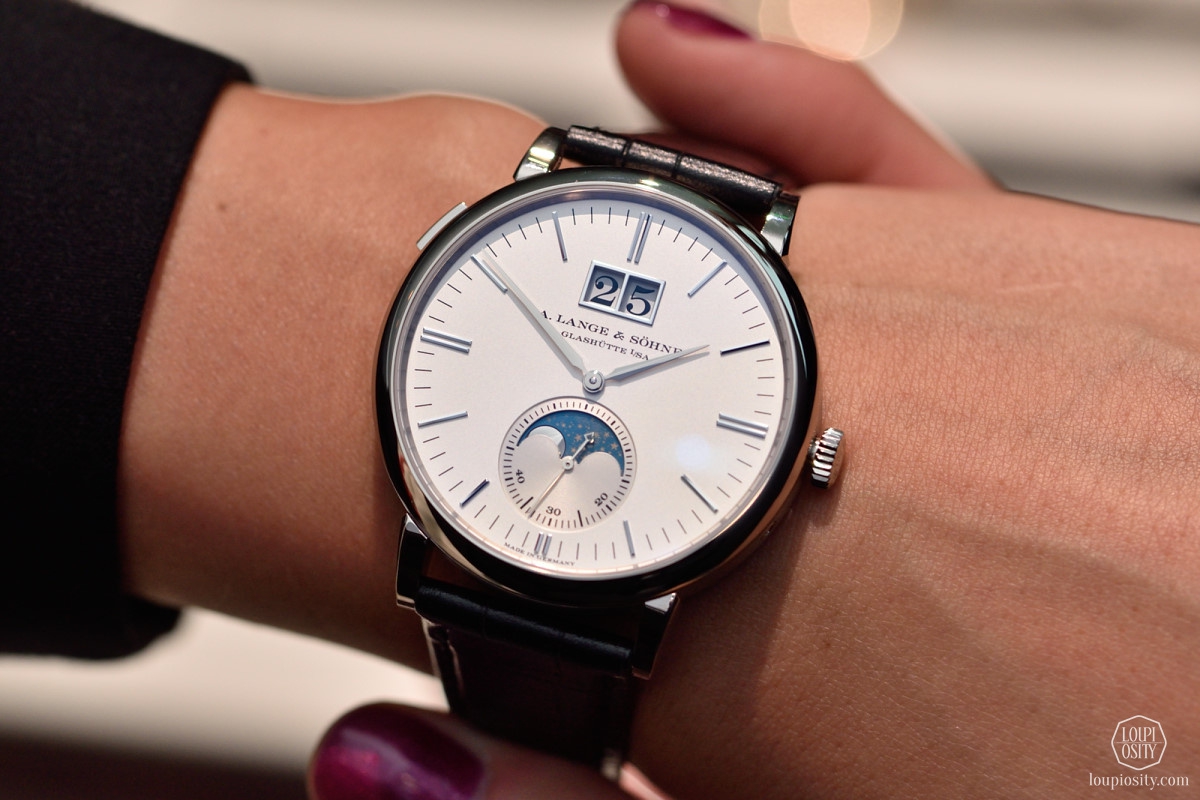 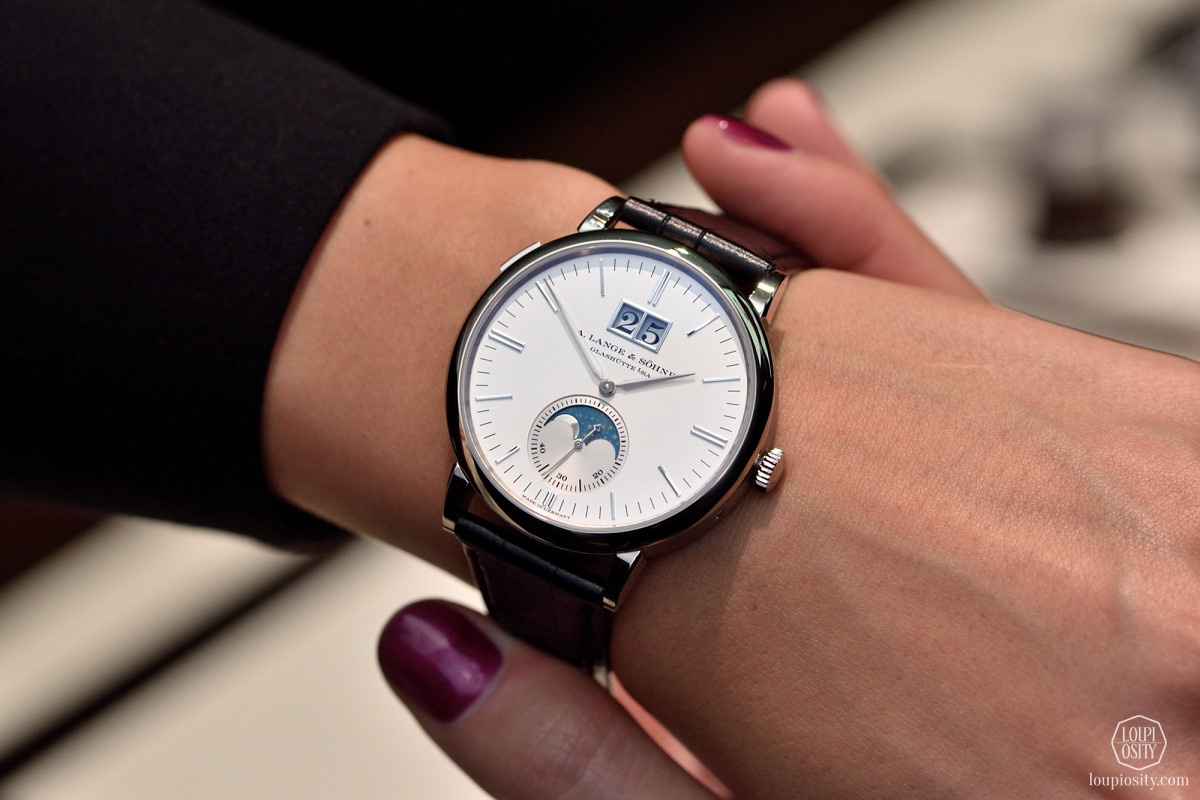 A. Lange & Söhne introduced the Datograph in 1999 and re-worked it a bit in 2012 (Datograph Auf/Ab). One of the flagship models of the Manufacture has received great attention and is a highly appreciated chronograph among collectors.

In 2016 the company presents the next evolution of the Datograph. As Anthony de Haas (Director of Product Development) explains, it was not easy to “touch” an already appraised calibre. The new dense (729 parts) L952.2 movement incorporates a smoothly integrated system of complications, including a perpetual calendar, a chronograph and – as opposed to its predecessors – a tourbillon.

The oscillation rate of the balance wheel has been reduced to 18,000 semi-oscillations (2.5 Hz) enabling 1/5th of a second stop time accuracy for the chronograph. When the crown is pulled out, the balance wheel is made to stand still in order to facilitate accurate time setting to the second.

The new timepiece is made in a limited edition of 100 watches in platinum with a black dial. 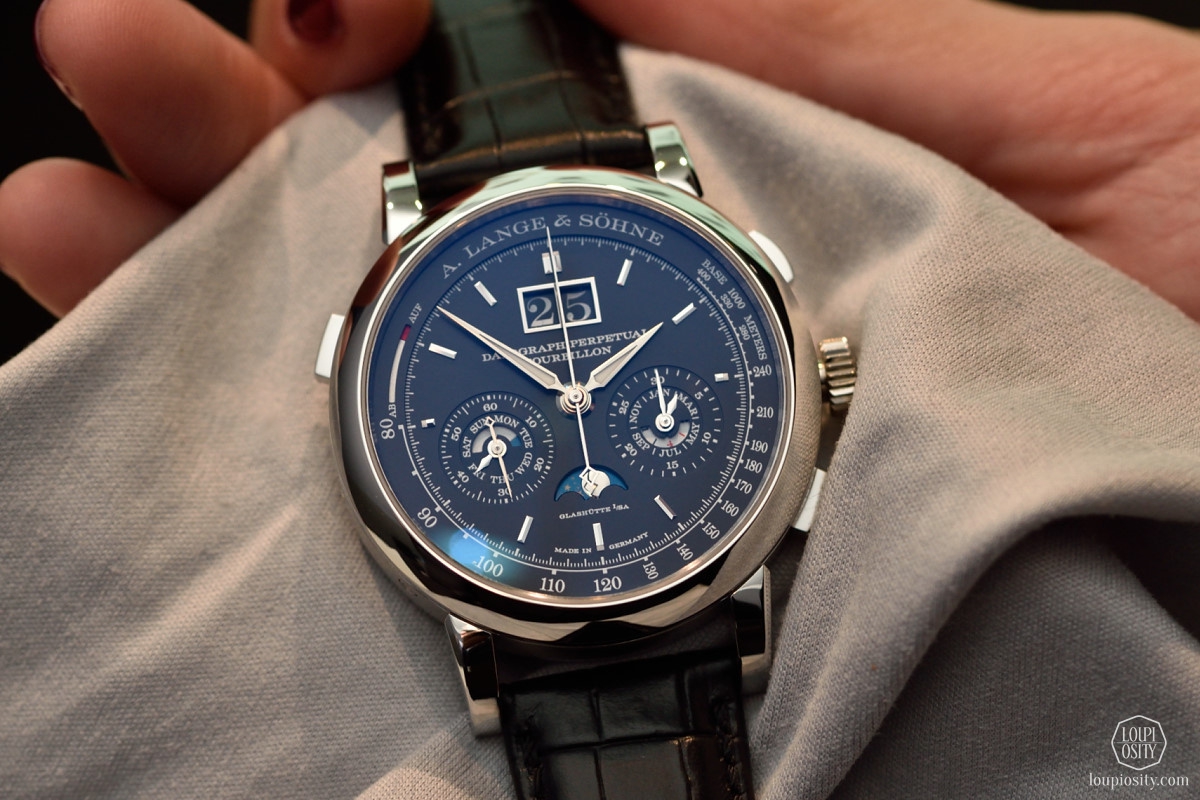 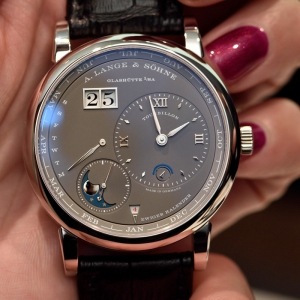 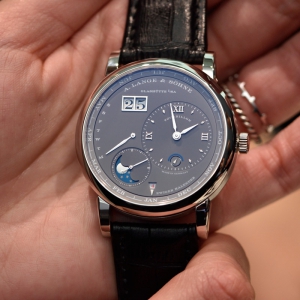 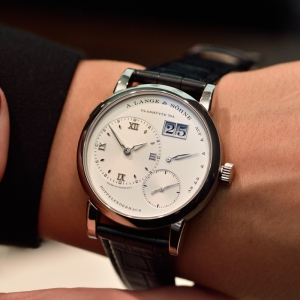 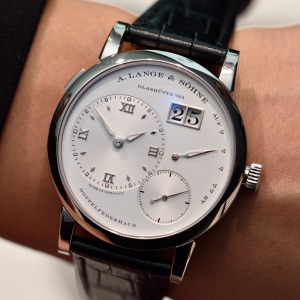 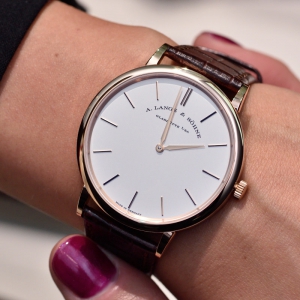 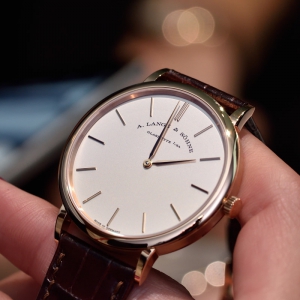 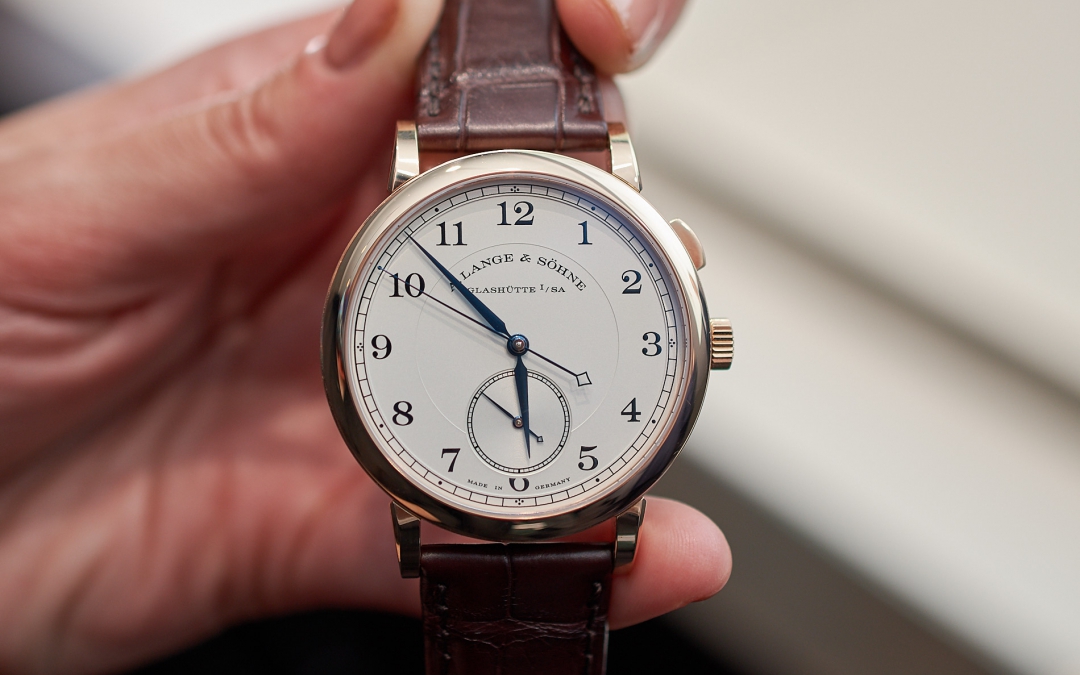 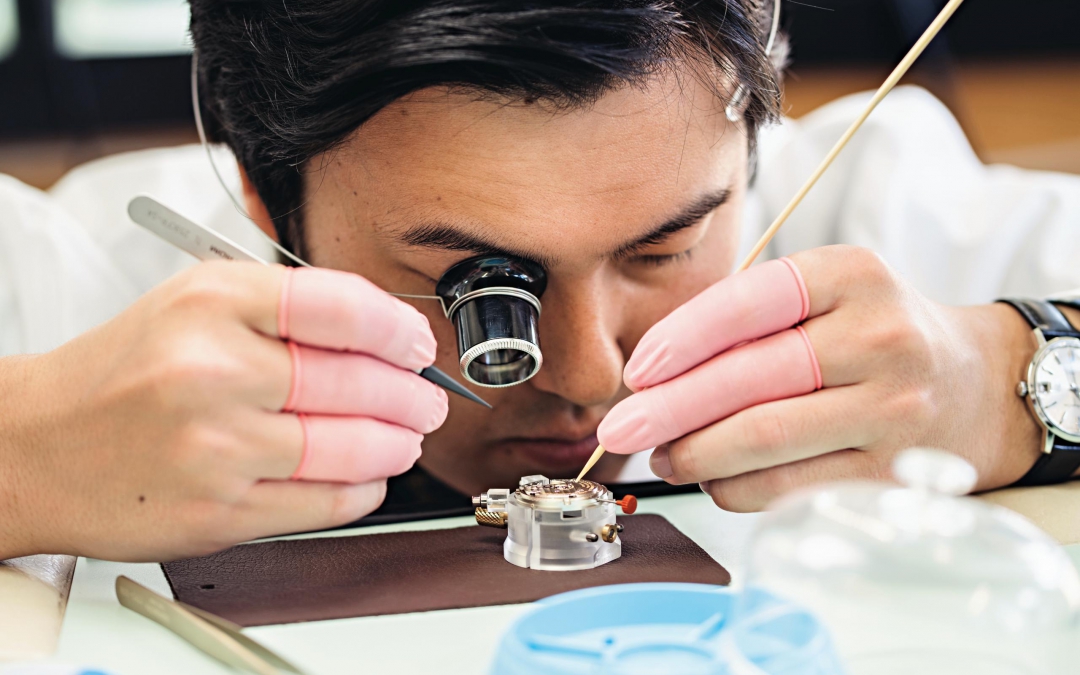