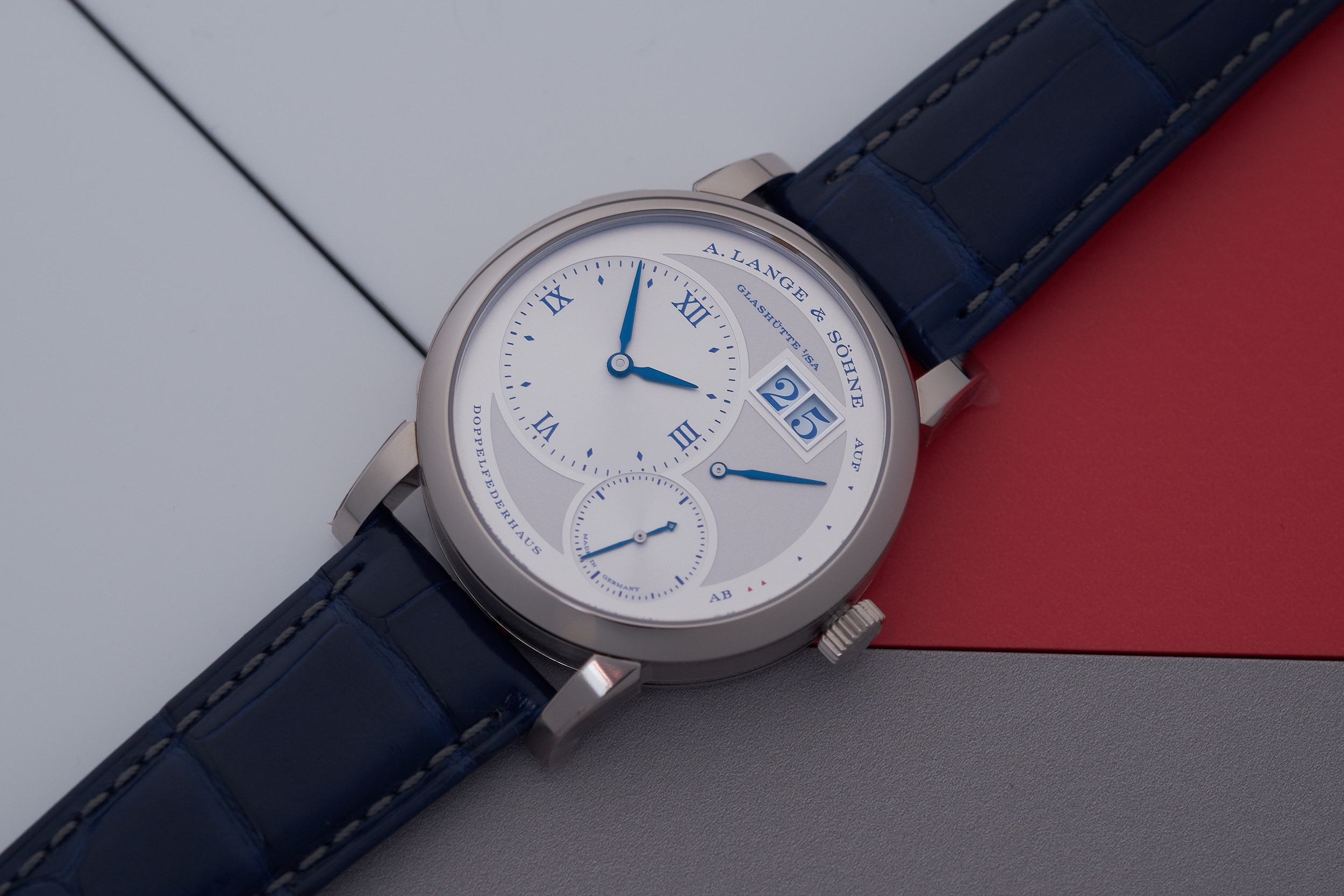 Just like the giant watch model at the entrance, the brand’s most important milestones have always belonged to the SIHH booth at A. Lange & Söhne. Two important anniversaries make the novelties special in 2019.

A month after the symbol of the Cold War: the Berlin Wall went down on 9 November 1989 (exactly 30 years ago, by the way) Walter Lange the great-grandson of Ferdinand Adolph Lange founded Lange Uhren GmbH and registered the A. Lange & Söhne trademark worldwide. He presented the first collection of the new era in 1994 with four models LANGE 1, Saxonia, Arkade and Tourbillon ‘Pour le Mérite’. The LANGE 1 has been a great success ever since, so it’s no wonder that the company has built the 25th anniversary celebrations around it.

For this occasion even a special logo was created: a circle with contrasting dark-bright figures shaping the numbers 25 and 10. At the circumference you can also see a 25,10/1 marker, which refers to the SIHH edition being the 1st of the 10 anniversary models that are going to be introduced throughout the year. A. Lange & Söhne will issue a new anniversary LANGE 1 model on the 24th of each month until October (the initial collection by Walter Lange and Günter Blümlein was presented on 24 October 1994). Referring to the German Reunification, the logo also includes the Brandenburger Tor.

Check out CEO Wilhelm Schmid giving a tour in the booth.

In 1994, the company showcased the first four prototypes including the LANGE 1 at the Dresden Palace. It was the first watch to incorporate the patented signature outsize date display, inspired by the clock of the Semperoper in Dresden. The new line resonated well in the media and the brand embarked on re-conquering the hearts of connoisseurs.

Walter Lange had an exceptional partner in his mission, Günter Blümlein (1943-2001). He was a German entrepreneur and a leading character in the revival of the fine-watchmaking industry. Beyond his role at A. Lange & Söhne, he was also instrumental in the resurrection of IWC and Jaeger-LeCoultre before Richemont’s acquisition of the three companies in the summer of 2000. 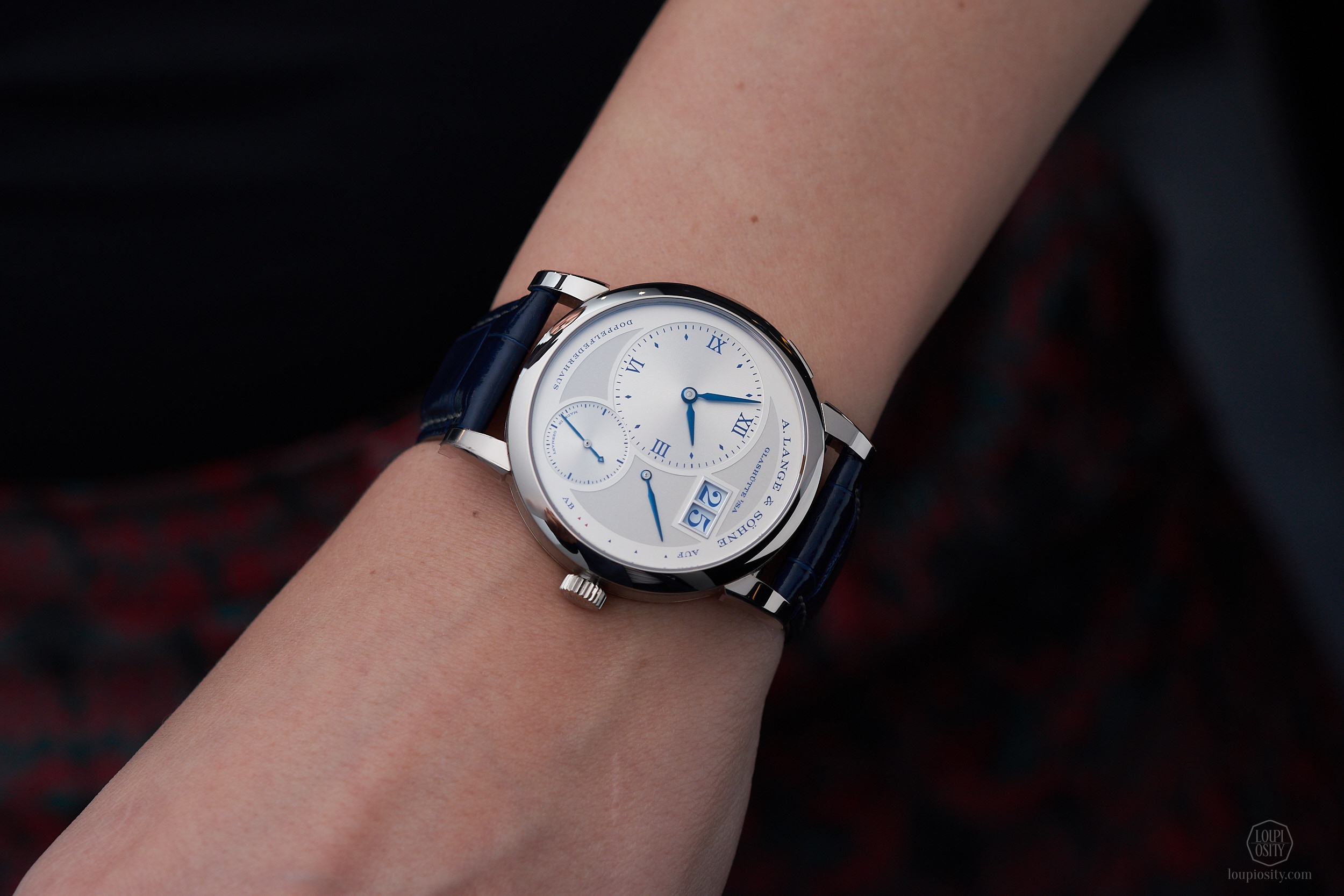 Although it is not common at A. Lange & Söhne to engrave persons on timepieces, this commemoration edition bears the names of both Walter Lange and Günter Blümlein as well as the “25 JAHRE LANGE 1” caption and the Lange Headquarters at the back. The opaque case-back in itself is also quite unusual for the contemporary company. They would typically reveal the movement’s beautiful Glashütte finishing. In fact, this is a hunter case and the decorated white-gold back can be opened to admire the anniversary engraving also on the balance cock of the manually wound L121.1 calibre. The ’25’ appears in an imitated outsize date window in the same vivid blue that the company is using for the moon disks.

The white gold case is matched with an argenté dial with deep-blue numerals, markers and date numerals. The hands are made of blued steel. The 250-piece limited edition comes with a blue alligator leather strap and grey seam.

As mentioned, this is just the first model in the row of 10 anniversary limited editions presented every month in 2019. Check out the brand’s social channels and the website on the 24th of every month. 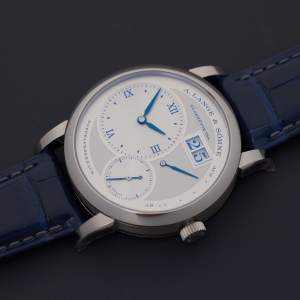 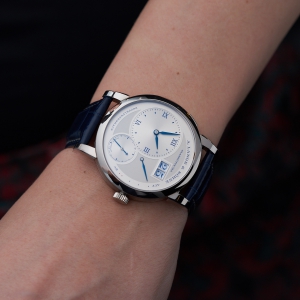 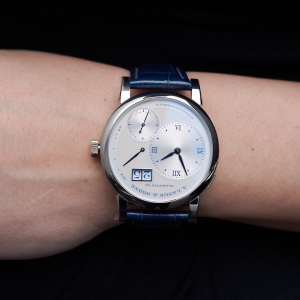 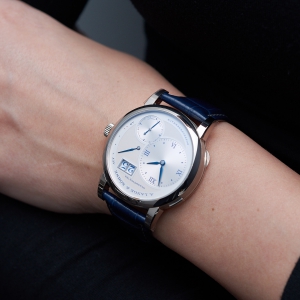 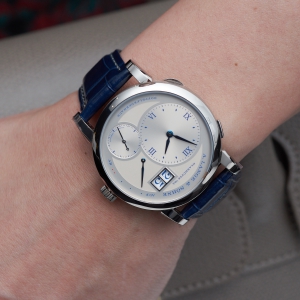 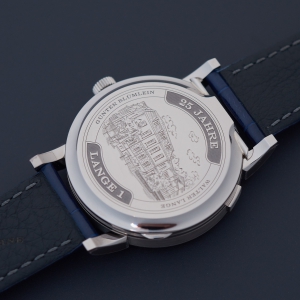 Another birthday kid is the ZEITWERK. Director of Product Development Anthony de Haas shared a story that when they launched the original ZEITWERK in 2009, it was intended to be a one off unique model. Walter Lange did not particularly like it, but as always he would make his statement clearly and leave the team to go on with what they planned, without interference. Due to its success, the original model has become the first herald of an entire collection.

A. Lange & Söhne exhibited a 49 times bigger version of the new ZEITWERK Date.

The 10-year anniversary piece has brought important developments that culminated in three main benefits for the user: a date function, a separate pusher for hours adjustment and significantly longer running time. 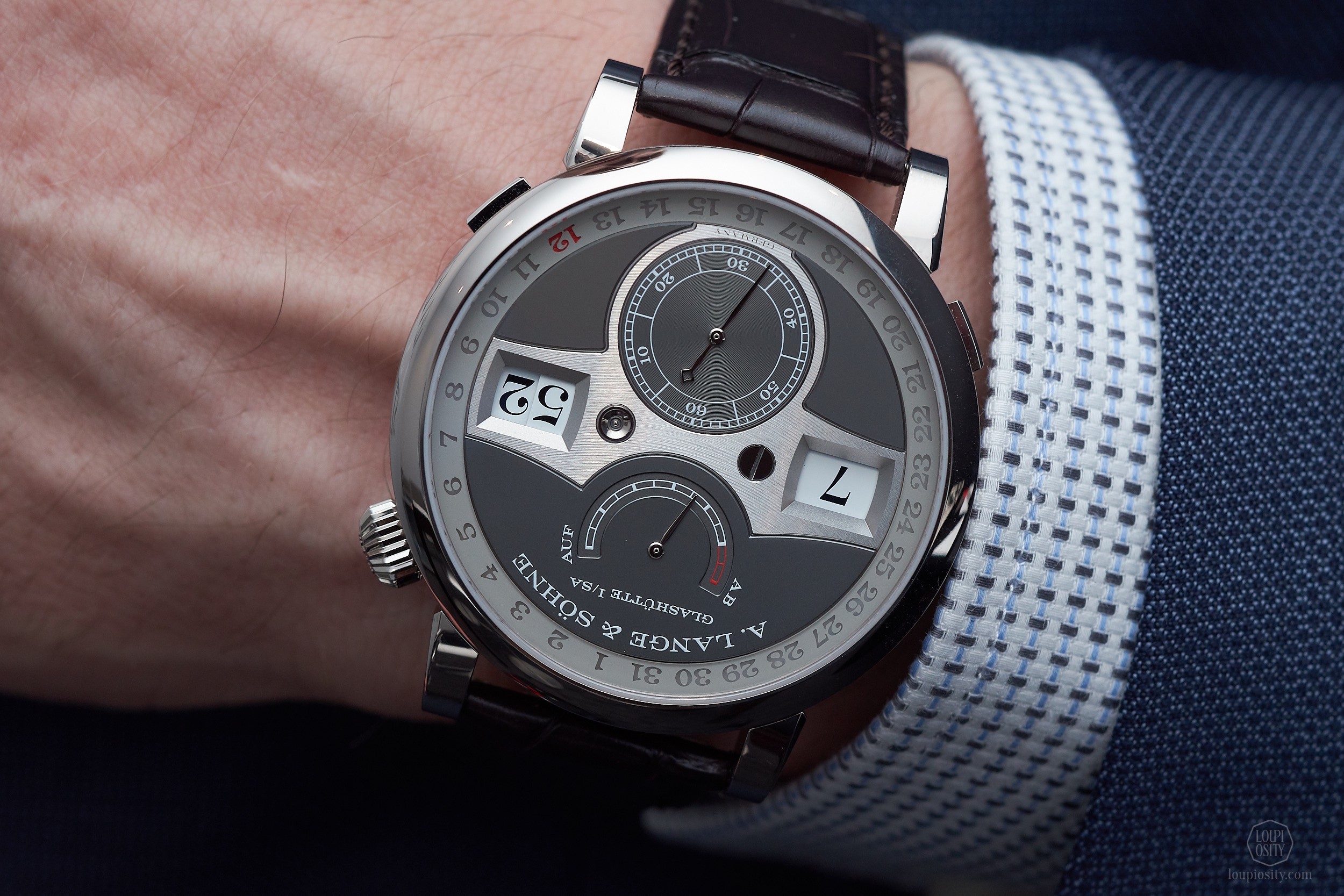 Many A.Lange & Söhne models feature the characteristic outsized date display. The ZEITWERK family already included various complications, like a minute repeater and other striking mechanisms (for example a 10-minute one for the ZEITWERK Decimal Strike) but never a date. Because the digital hour and minute apertures are the foundational concepts of the ZEITWERK, an outsize date would not fit aesthetically or mechanically. Therefore, the date appears as an outer ring with light grey discretely. The numerals are open and as the red section on the disc underneath travels, the current date appears in red. Because it is a ZEITWERK, the date indication has to jump instantly too, just like the hours and minutes. Date can be set by the crown forward and backward or with the pusher at 8 o’clock. An interesting feature of this mechanism is that the date switching impulse is only generated when the pusher is released. This indirect coupling saves the movement from the potential excess force of the finger.

A dedicated button at 4 o’clock provides easy adjustment for the hours, which is especially handy when flying across time zones.

In the new movement, the team managed to increase the power reserve from the original 36 hours to 72, while making the watch 0.3mm thinner. 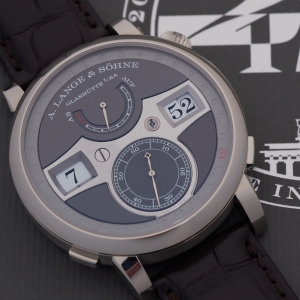 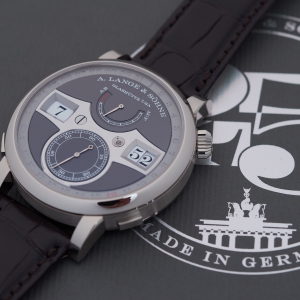 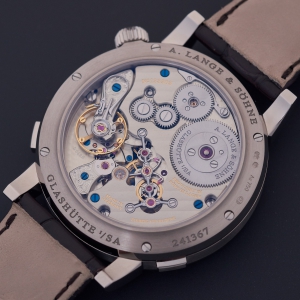 The Datograph Perpetual Tourbillon was first introduced in 1994 and in 2016 it received a new calibre, the L952.2. It was a limited edition of 100 platinum pieces with a black dial. In 2019 A. Lange & Söhne released a second round of 100 timepieces with a white gold case and a dial in solid pink gold with solid gold appliqués. The hands are rhodiumed gold and blued steel. The pink gold lends a completely different mood to the watch – I personally think it looks even more special than the previous version. 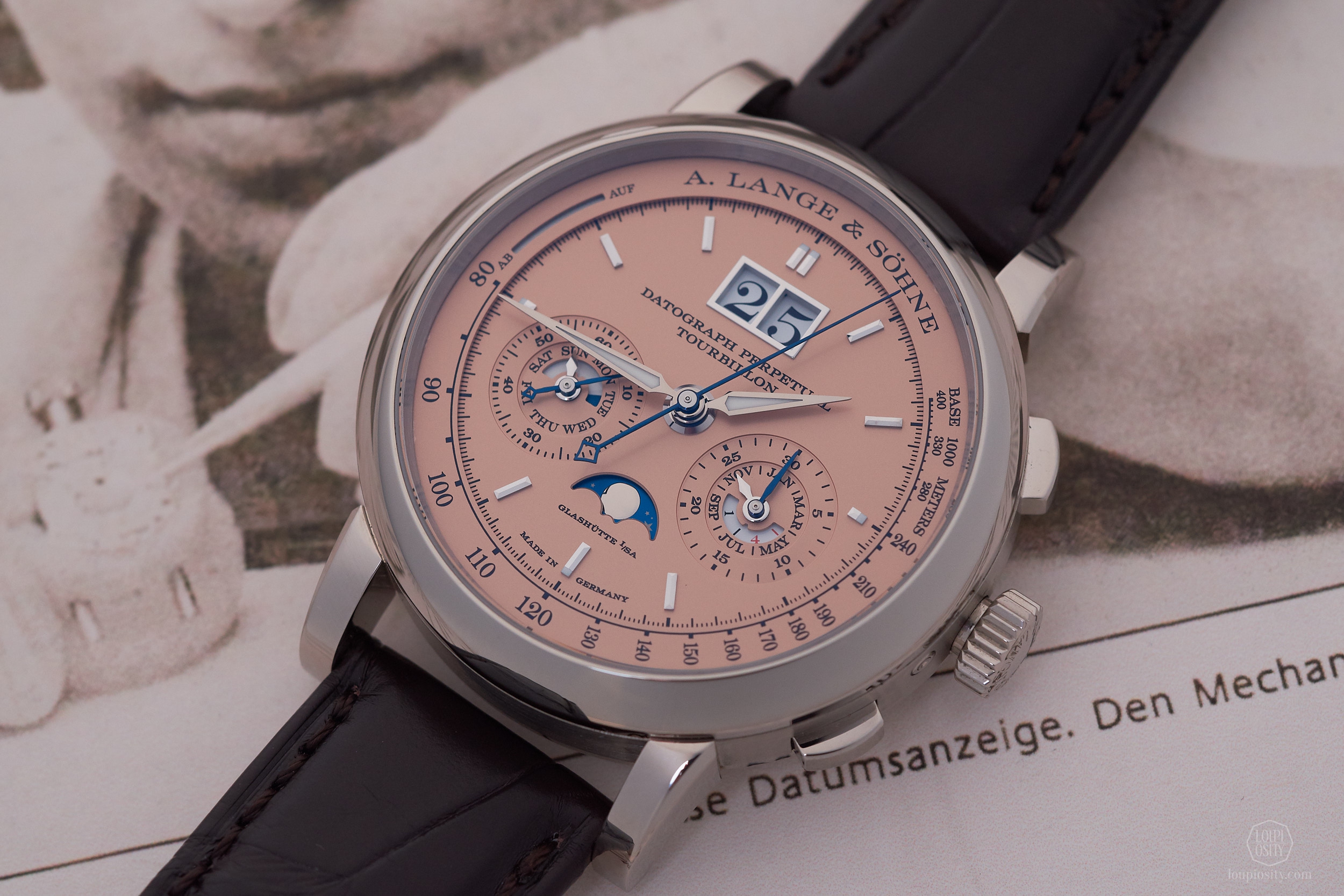 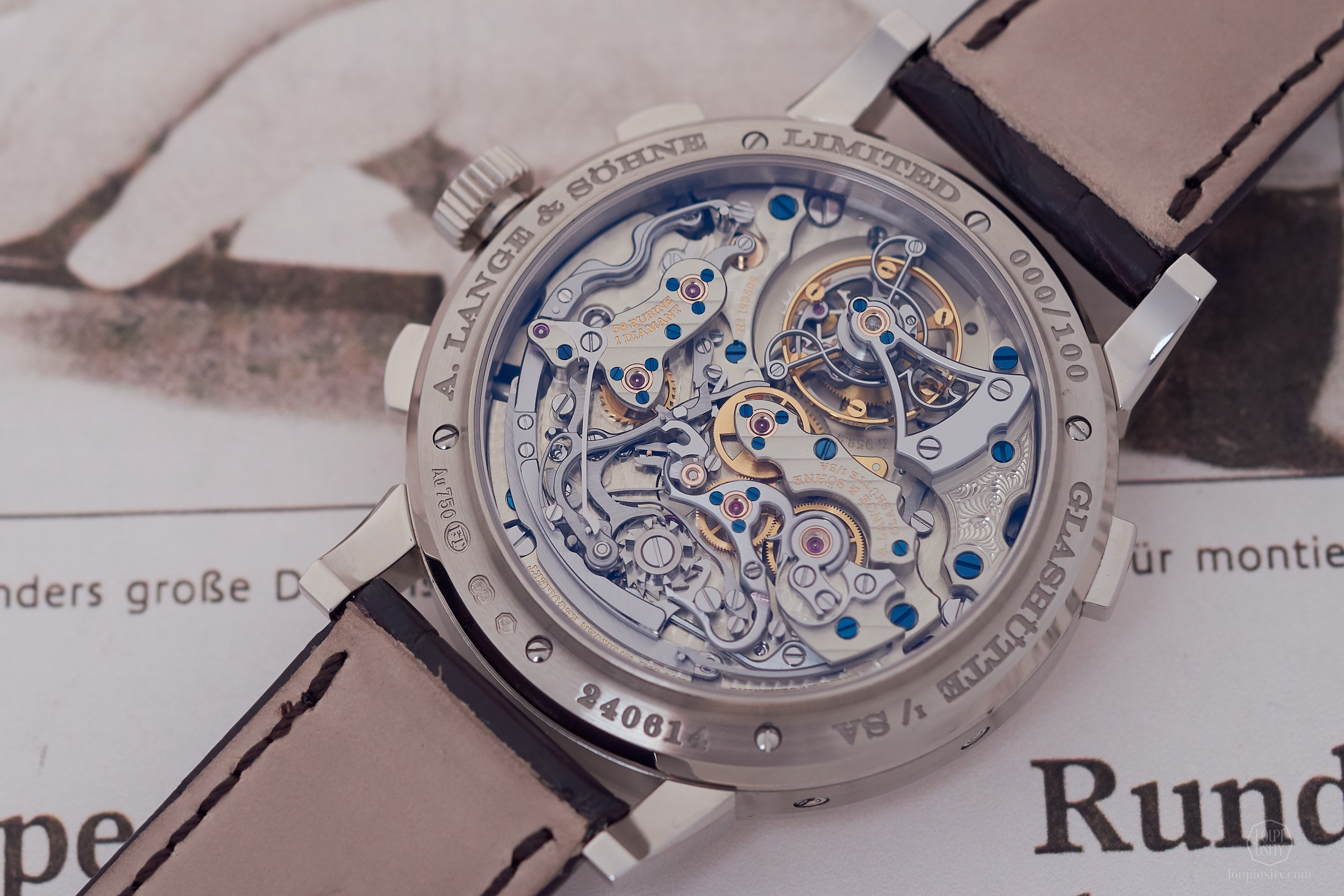 A. Lange & Söhne started the Richard Lange line in 2006. These timepieces are dedicated to the tradition of scientific observation watches by the brand. The Jumping Seconds model where the mechanism moves the sweep-seconds hand by exactly 60 steps per minute joined the family in 2016 with platinum case and rhodié dial. The latest edition (not limited) combines white gold with a black dial. 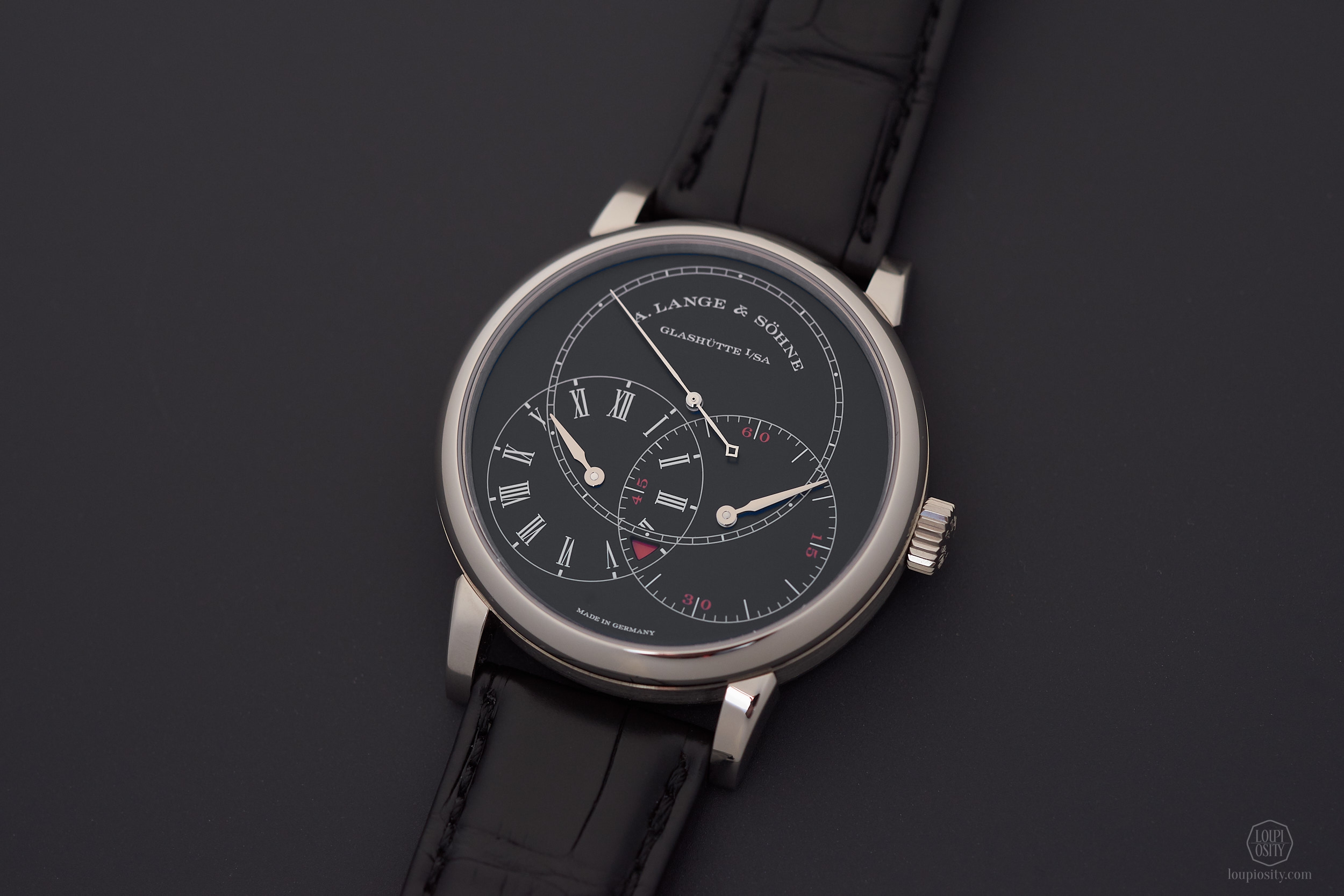 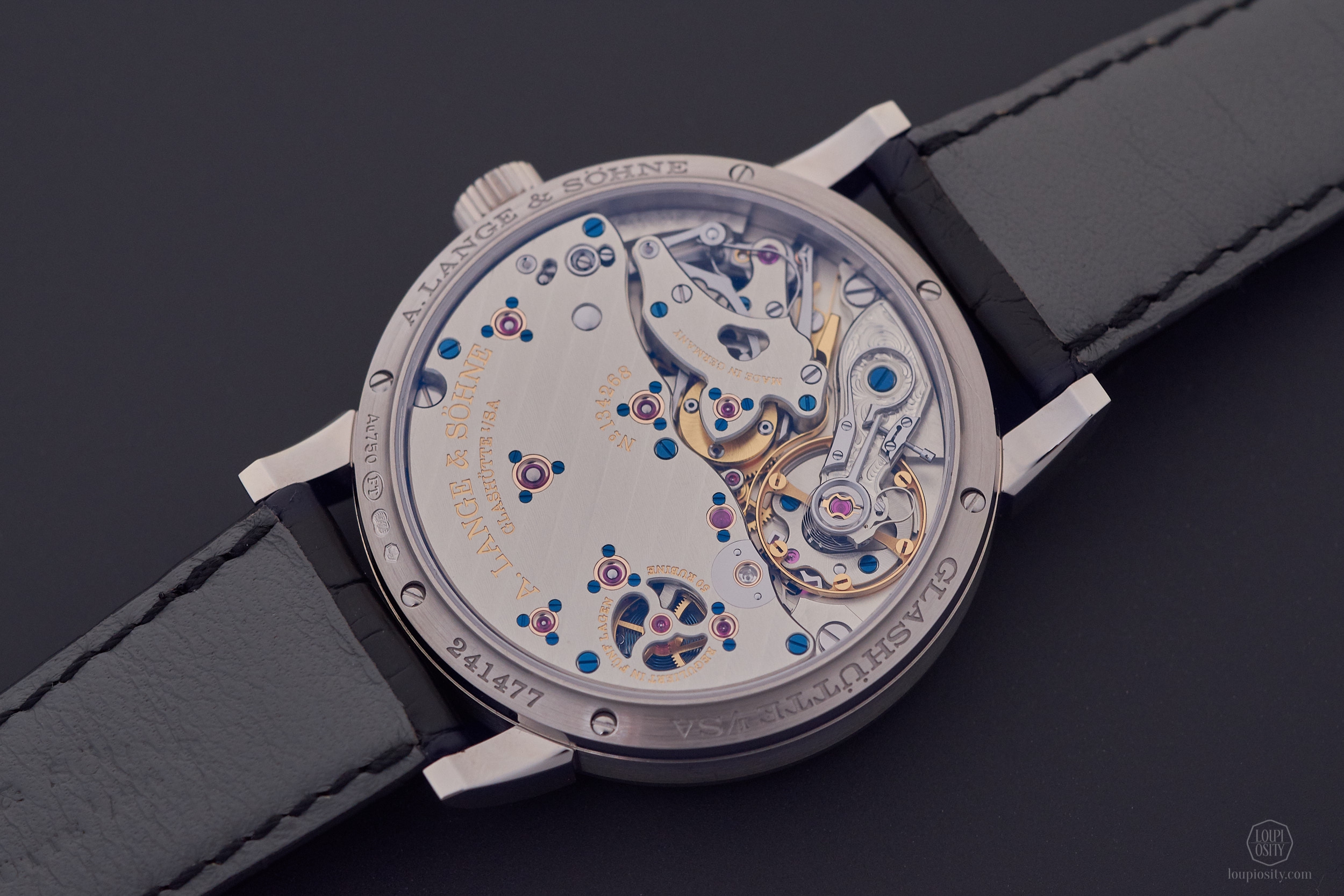 The Langematik Perpetual, mixing a perpetual calendar with the Lange outsize date dates back to 2001.

The new 100-piece limited edition comes in honey gold. The alloy patented by and proprietary to A. Lange & Söhne is harder than other gold alloys. Since 2010, it has been used for selected models of the manufactory (the Zeitwerk Decimal Strike or the Lange 1 Time Zone for example). 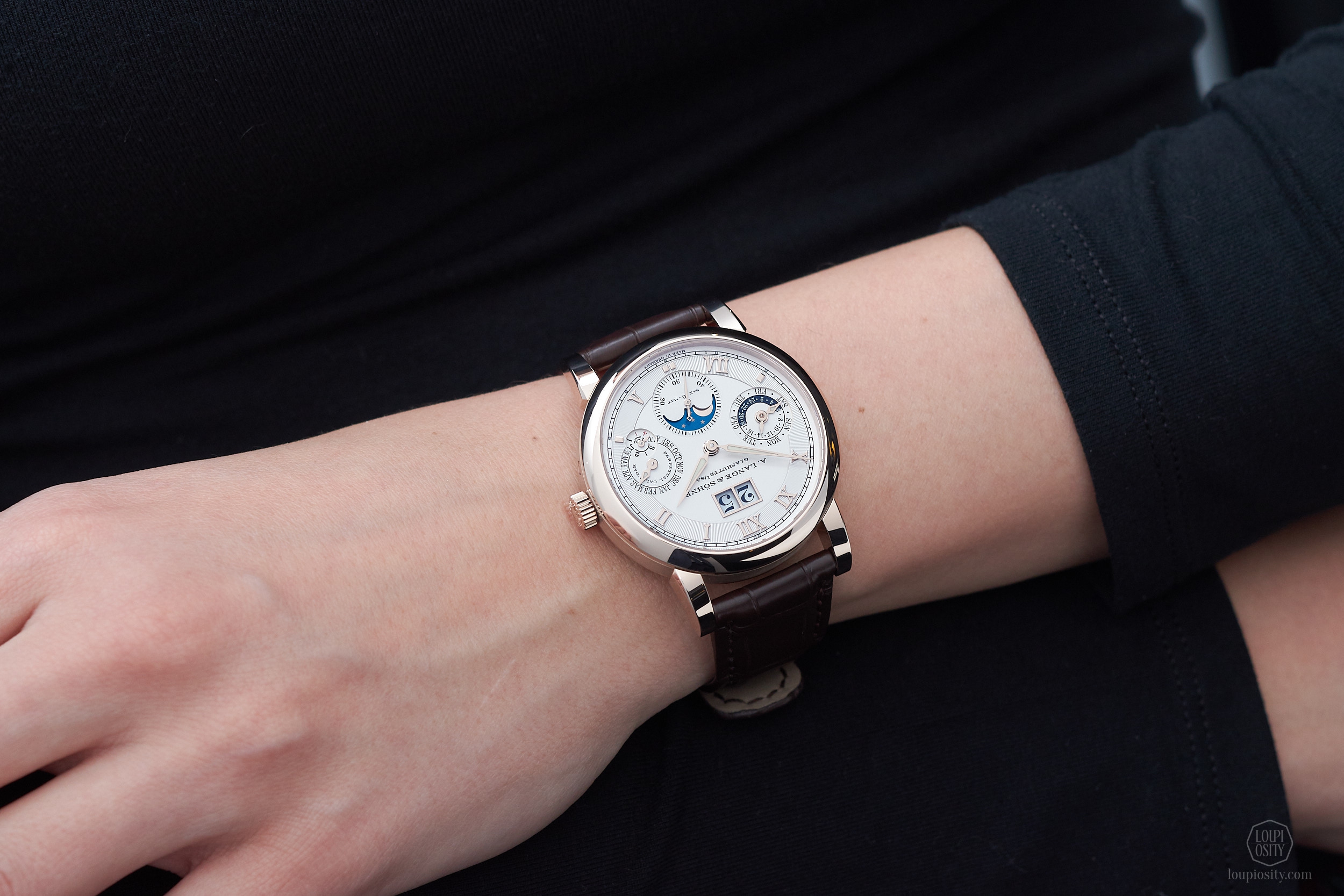 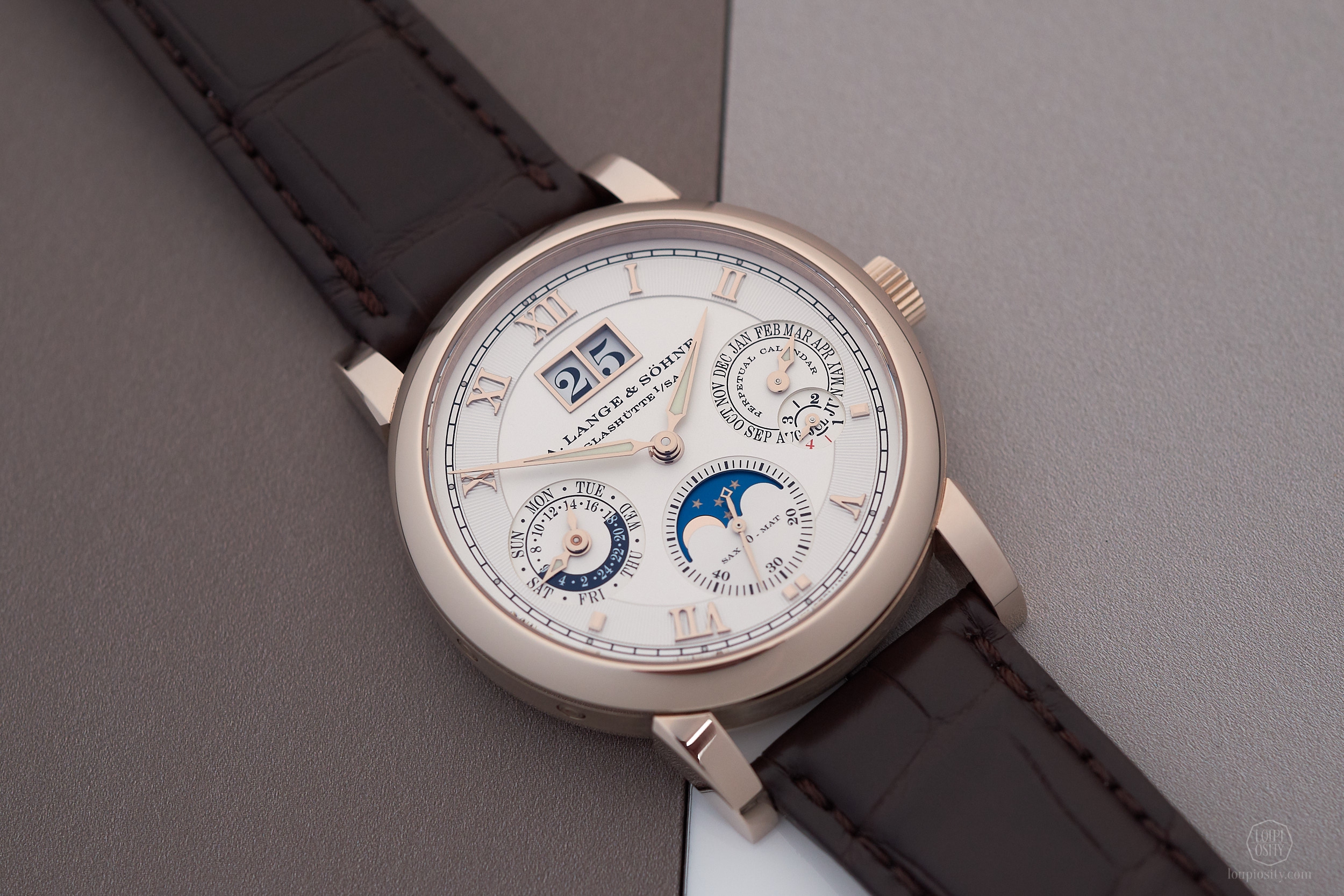 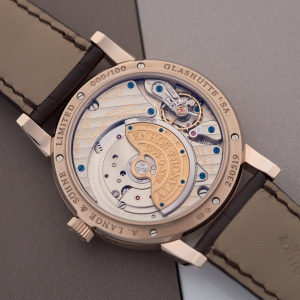 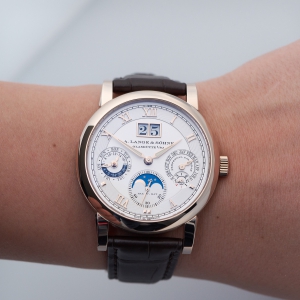 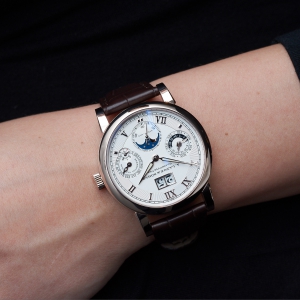