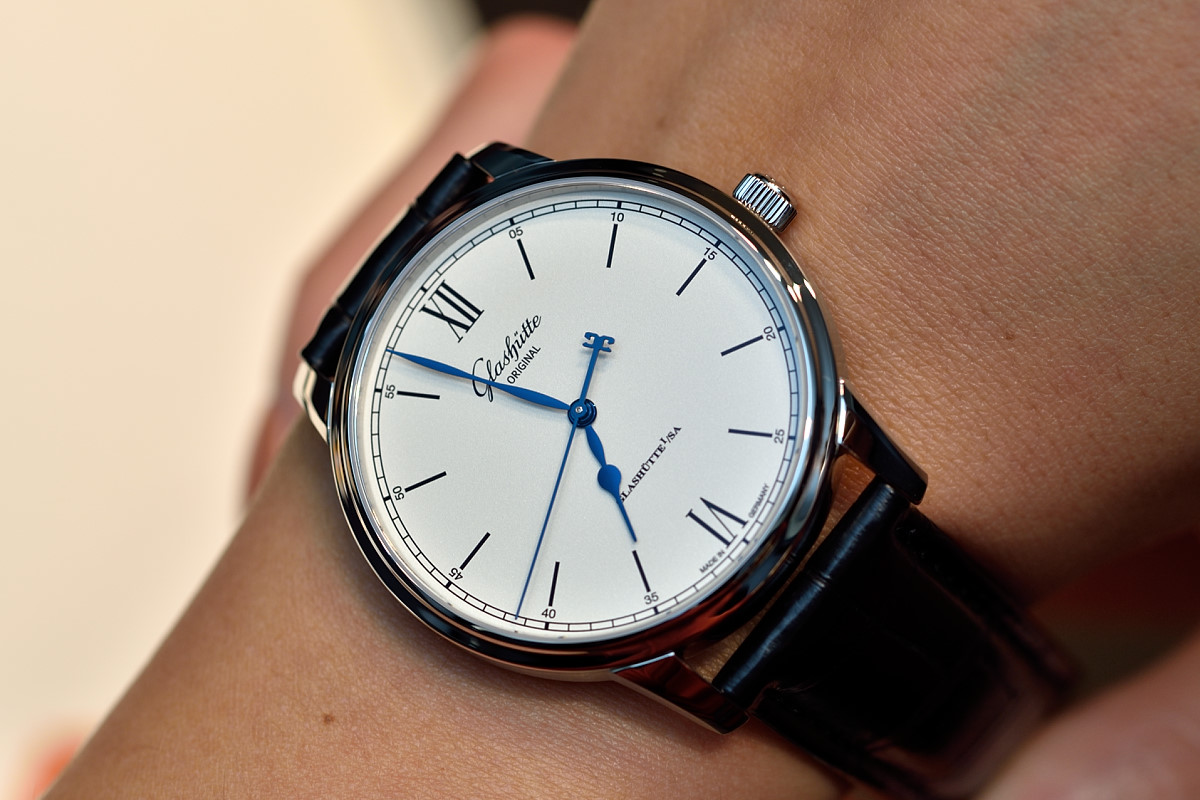 This Autumn brought new colours in the stylish “Goldenes Quartier” of Vienna. With the intention of strengthening its international presence in high-profile locations, Glashütte Original opened a new flagship store in the most prestigious shopping zone of the city, under Kohlmarkt 4. The official opening is coming up in October, but we visited the boutique on the way to Albertina. Glashütte Original creates both ladies’ and men’s timepieces in a well-recognizable style, which calls for a dedicated part in our series scouting for watch rarities women should consider.

“Goldenes Quartier” stretches near the Hofburg Palace on three streets, Kohlmarkt, Graben and Kärntner Strasse, giving space for luxury shops since the early 19th century. Right in its neighbourhood, the recently restored Goldenes Quartier extends its rich variety with the top boutiques of the fashion industry and the gorgeous Park Hyatt Vienna (converted from the 1915 Austrian Monarchy Bank). The First District of Vienna is listed as a World Heritage Site by UNESCO.

In the circle of the Swiss watch brands, it is not an easy call to lead a non-Swiss fine-watchmaking company to success. Glashütte Original is headquartered in the German Free State of Saxony. Although the firm is currently owned by the Swatch Group, it is known as a traditional German watch brand producing classical and sophisticated mechanical timepieces. Many would even say that it is rather a masculine brand, having great complications in its repertoire, such as the Grande Cosmopolite Tourbillon or the Senator Chronograph Panorama Date. Yet, Glashütte Original can be a definite choice for women too when looking for out-and-out ladies timepieces or fine manly models. The new flagship stores (another opened in Paris at the Rue de la Paix, just around the corner from the elegant Place Vendôme and the Opéra Garnier) bring these fine pieces in an exclusive setting.

Kohlmarkt 4 has a 70sqm sales area with a modern & classy interior and elegant but relaxed atmosphere. The large “Wonder Wall” with an oversized magnifying glass cannot be missed – it immediately captures “mechanical geeks” by offering an intimate view inside the movements and onto the delicately decorated finishes.

Let us start with our favourite model from the Glashütte Original’s Ladies Collection, the PanoMatic Luna.

The gentlemen’s version, the PanoMaticLunar was introduced in 2003. Last year the collection received a steel model with a blue dial, and one rose gold edition with a black dial (see them here).

The dial’s layout of the PanoMatic Luna is similar to the men’s piece, and it is framed in a similar size too: 39.4 mm in diameter and with a 12 mm thickness. For some, it might be a bit too robust, nevertheless its beautiful shape and the handsome face will make up for those who don’t mind feeling the “seriousness” of a watch on the wrist. I certainly belong in the second group. A few refined details make this piece even more feminine: the characteristic panorama date is oval-shaped and the dial is an iridescent blue made out of mother-of-pearl that changes hue in light. The hour markers and the case are decorated with diamonds weighing almost one carat in total. The crown is set with a 0.1ct diamond, too.

The PanoMatic Luna houses the calibre 90-12, a modified version of the men’s automatic 90-02. It provides off-centre hours, minutes, small second, date and moon-phase functions. The movement’s striped three-quarter plate, the skeletonized rotor and the Duplex-swan-neck fine adjustment balance with a nicely engraved bridge are visible through the sapphire crystal case back. 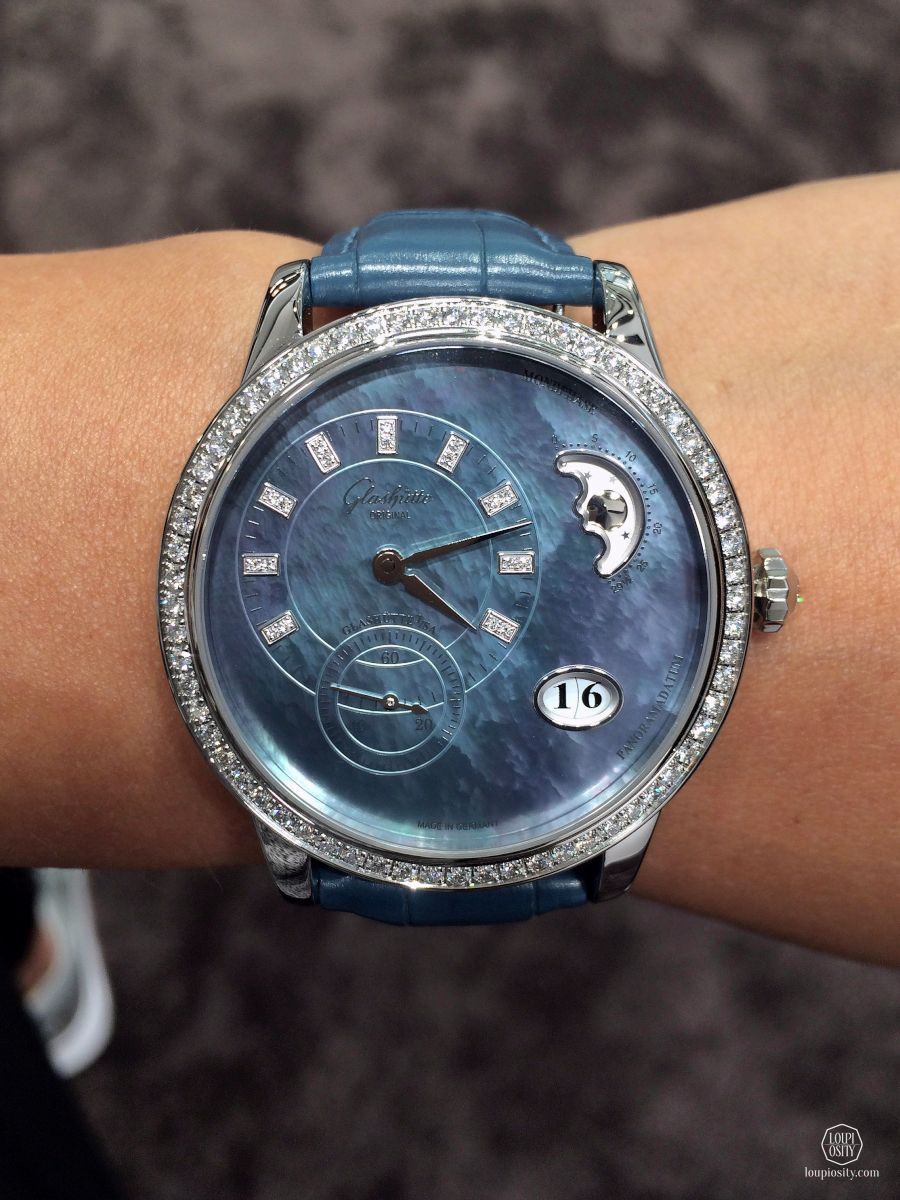 The first ladies watch with the “Glashütte Original” sign was issued in 1927; several models have debuted since. Nowadays they appear mainly in the Lady Serenade and in the Pavonina line.

Pavonina – from the Latin name for peacock, pavo – is a real dainty women’s timepiece. The cushion shaped Pavonina was presented in 2013 in steel, red gold and bi-colour versions. The piece in white gold we saw in Vienna came out a year later in 2014. The watch is set with 513 brilliant-cut diamonds and the gemstones flow along the curves of the case. The satin strap is a pinkish purple, so called “Radiant Orchid”. The Glashütte Original logo has been printed on the inside of the domed sapphire crystal.

Glashütte Original has its own dial manufacture in Pforzheim with skills and machinery required to realize even the most detailed dials such as this mother-of-pearl dial with guilloche motifs which appears among the diamonds. 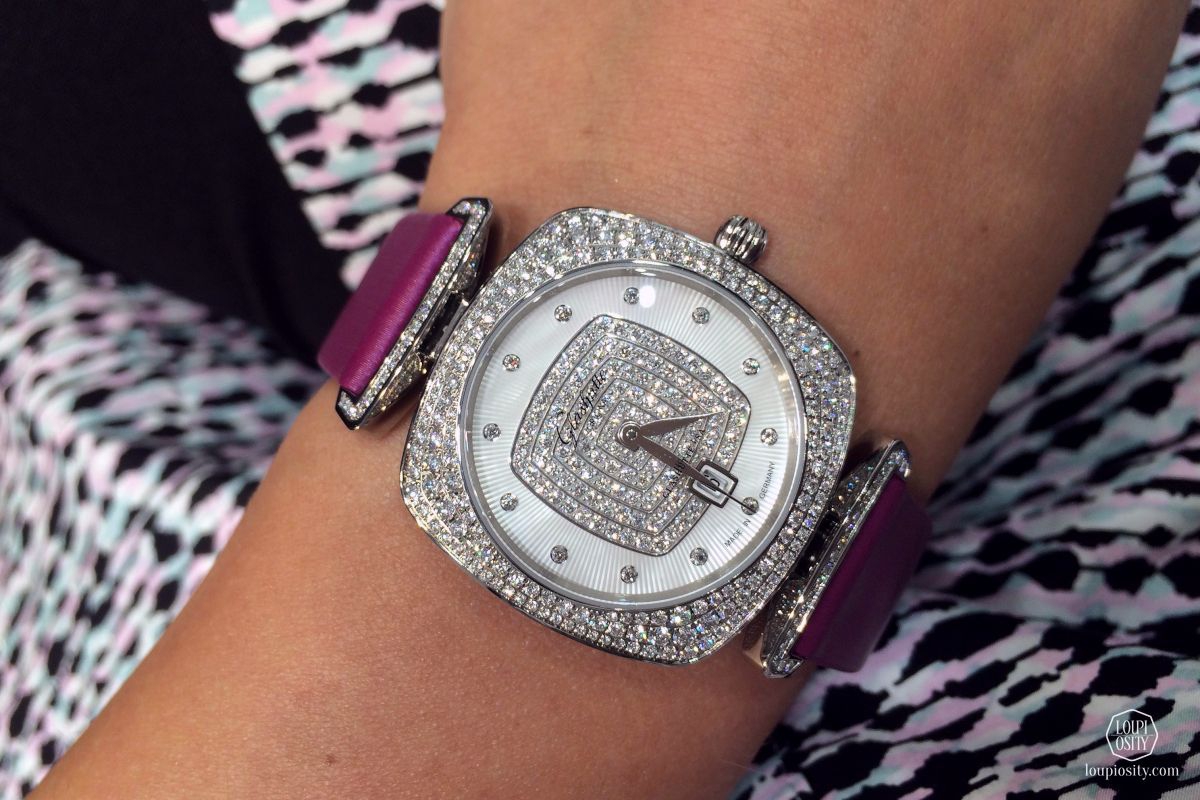 A nice example of a men’s piece perfectly comforting women’s wrist is the Senator Excellence presented at Baselworld 2016. The fine automatic piece includes Calibre 36, the new generation movement of Glashütte Original. Discover more here about the mechanism which stands out with versatility and serviceability.

The case is 40mm – so only slightly bigger than the PanoMatic Luna but it’s 2mm slimmer.

The timepiece comes in two similar looks, and a third, born under a different moon. The Roman numeral versions are made of red gold and stainless steel and they both have a varnish silver-grainé dial with laser engraved black hour markers. The SuperLuminova filled hands glow over the other model’s black dial surrounded by Arabic hour markers. The hands on all three are classic: long, slim poire hour and minute pointers and a filigreed seconds hand with a tiny double-Glashütte logo. 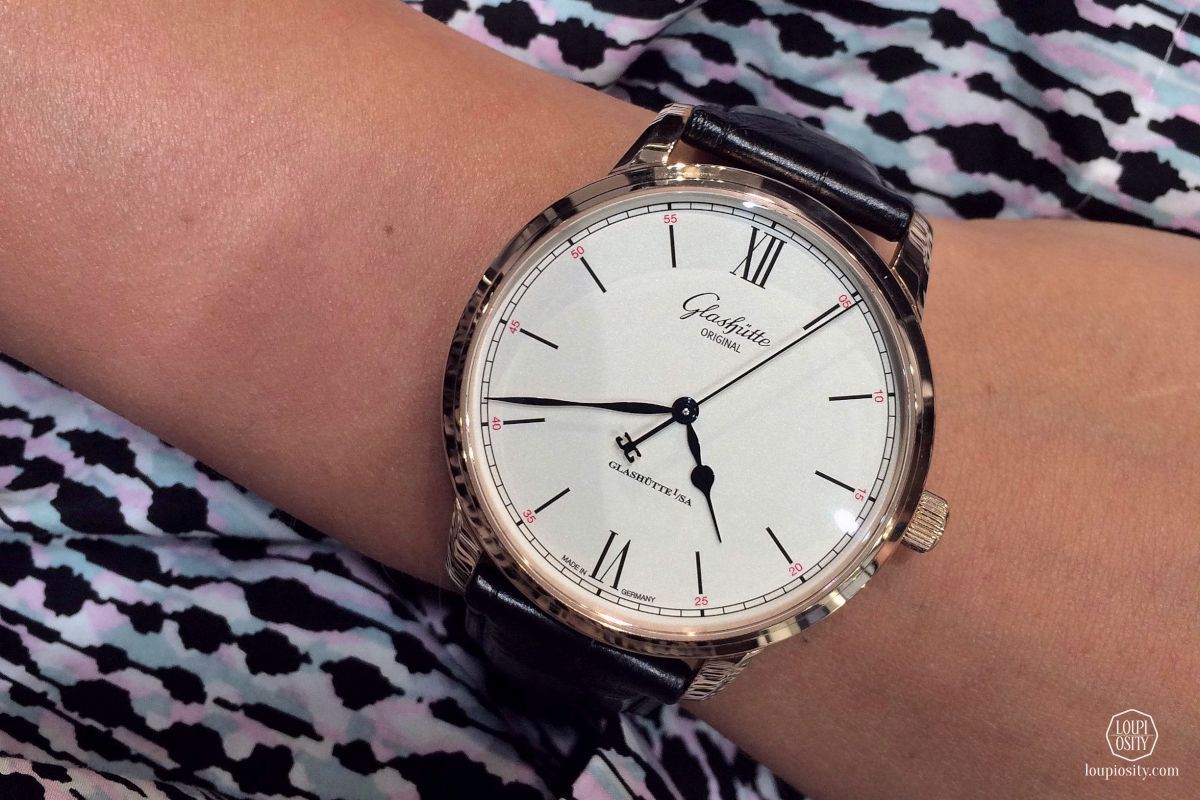 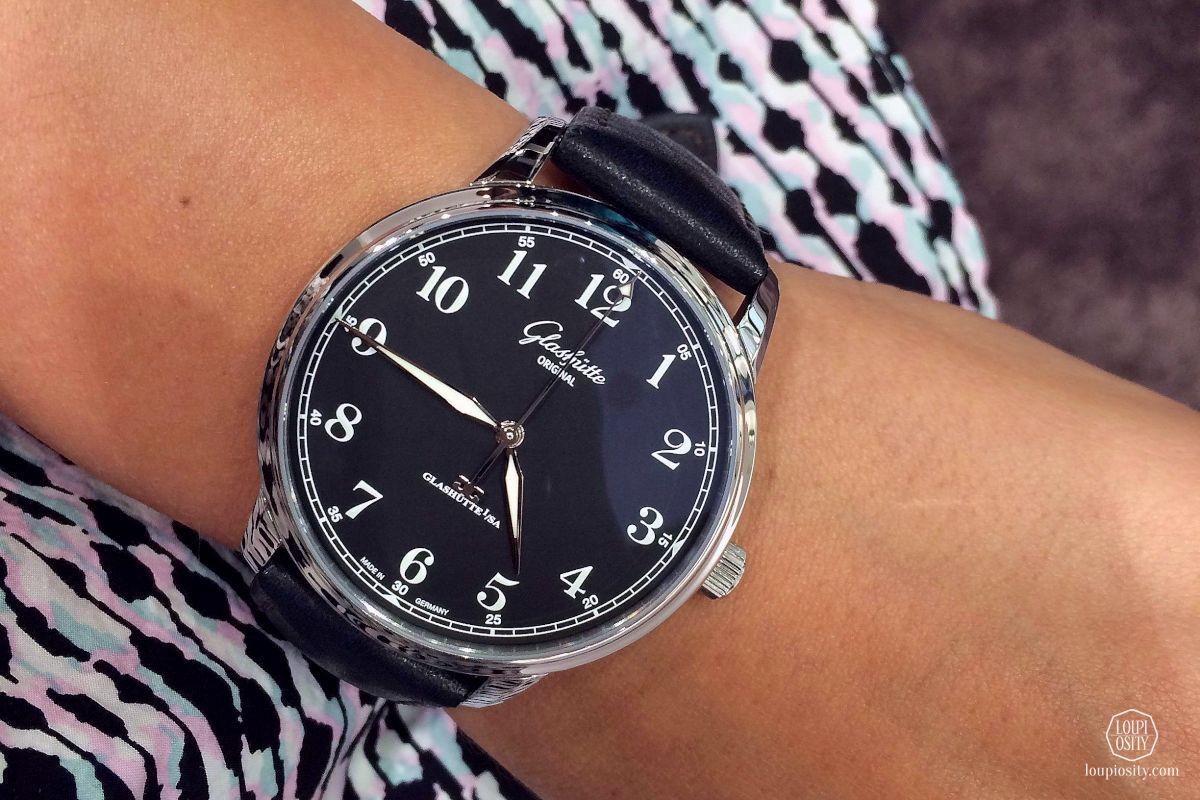 Breitling Chronomat for women We had the opportunity to preview the new Breitling Chronomat women watches in the Breitling boutique in Vienna.Girls don’t just wanna have fun – Vacheron Constantin, Part… In this series, we showcase mechanical and artistic wonders that were specially designed for women and others originally for men that come alive on spirited ladies’ wrists. Vacheron Constantin presented wonderful novelties to women at the online Watches and Wonders event in April. Finally, we were able to try them on.Zenith Watches & Women This October Zenith puts extra emphasis on women with two meaningful releases - the Chronomaster Original in a new version and the DEFY Midnight Pink Ribbon edition. Discover them with us.