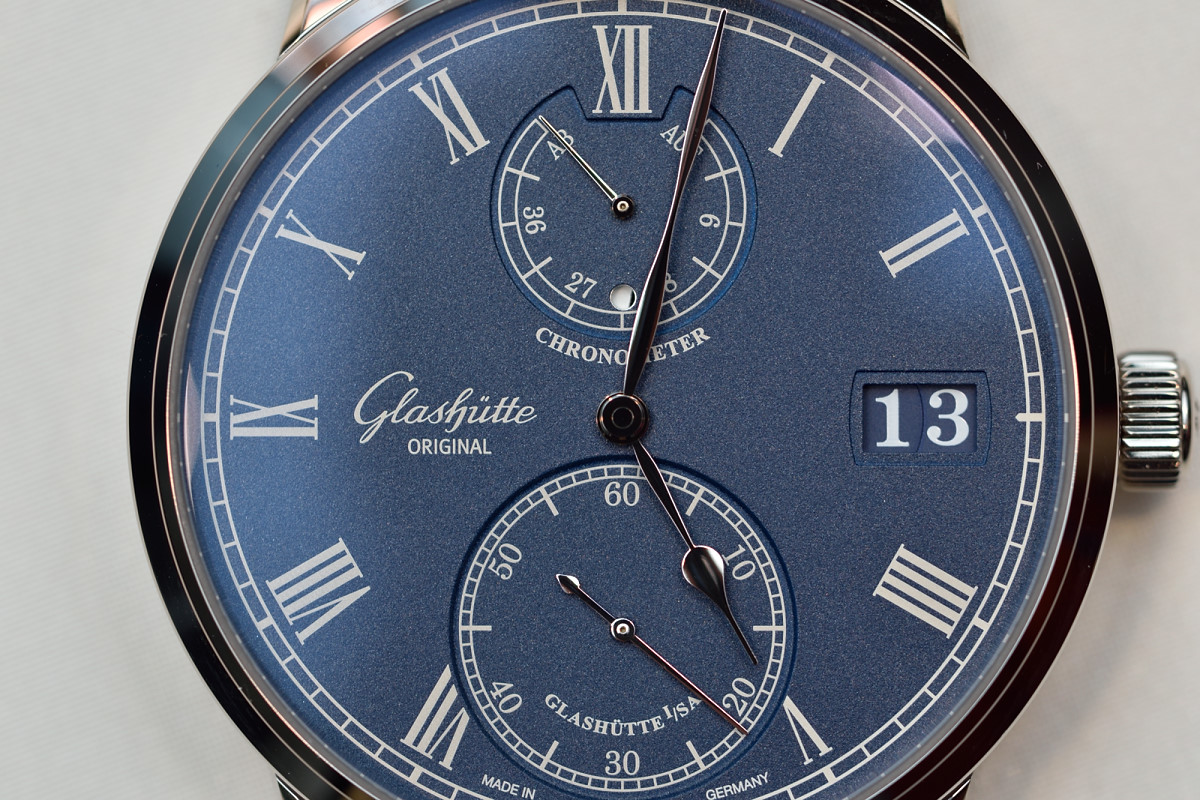 Last year the history of the little Saxon town, Glashütte’s 170 year-old watch industry came alive via Glashütte Original in Basel. Precise timekeepers have been made in the settlement since Ferdinand Adolph Lange established the industry there. Beyond precision, elegance has also been a characteristic attribute of the watches that originate in the picturesque region. The 2016 Glashütte Original Senator Chronograph introduced at Baselworld amazed me with its structured deep blue matte dial. Before taking a closer look at it, let us first visit another city 600kms from Glashütte, which is accountable for the handsome looks of the company’s timepieces.

The “three-valleys town” of Pforzheim has been inhabited since the Roman times. Its importance, being on the route connecting two military bases Argentoratum (today Strassburg) and Cannstatt (a suburb of Stuttgart), was given by the ford just after the confluence of the Enz, Nagold and Würm rivers. Hence its Roman name, Portus. The first flourishing of the city was in the 13-14th centuries, thanks to the increasing wood trade, timber rafting and tannery and also for being one of the administrative centres of the Margraviate. The stormy history witnessed the city burn down several times during the Nine Year War in the 17th century and later on in WWII.

Watchmaking and the jewellery industry was started in the institution for orphans in 1767 as per the order of Margrave Karl Friedrich von Baden. With time, Pforzheim became the “Golden City”, the #1 jewellery producer and exporter in Germany, responsible for over two-thirds of the country’s overall production. Even though other industries gained weight, the city is an important jewellery hub to this day.

Glashütte Original has its own dial manufacture in Pforzheim with skills and machinery required to realize even the most daring concepts of the design team, like the fantastic Sixties Iconic collection. Creating blanks and finishing the surface, lacquering and galvanizing, painting and printing, placing appliqués are all performed here.

Back to the fascinating dial introduced in 2016… In the last few years there has been a growing trend in blue dials and almost all fine watch brands have models in blue. However, it is not an easy colour to achieve in such an appealing hue. The deep blue of the Senator Chronometer is the result of a multi-layer lacquer surface on a grained finish, the texture of which calls out to be touched. The Roman numerals are galvanized silver, the hands as well the case are white gold. The traditionally slim bezel of the Sentator Chronometer became even more slender leaving larger space for the confident dial. The rectangular sections of the neat railroad that runs in concentric circles with the thin bezel are in nice harmony with the pert Roman numerals. The visual unity is broken only at 3 o’clock by the Arabic numerals in the oversized date aperture, the disk of which is painted in the same blue. The proportions of the dial elevate the elegance further with displays for seconds at 6 o’clock, power reserve at 12 o’clock, and the aforementioned date at 3 o’clock.

The blue – white gold accord is superb, and complemented by a Lousiana-Alligator leather strap in matching blue.

The new model is equipped with the same manual winding, three-quarter plate built Calibre 58-01 as its predecessors. It provides jumping date, day-night indication, power reserve display and zero-reset functions and its timing abilities are acknowledged by the German Calibration Service. It seems to be a trend to have more reasonably priced, yet high quality mechanical timepieces in the portfolio of watch companies. One fundament to such criteria is a reliable base calibre, preferably built in-house with all possible components. It takes long years and a vast investment to get there, but then it can appear in various models boosted with additional modules, offering versatility and better serviceability.

Glashütte Original’s new Calibre 36 is a step in this direction. The Manufacture developed a very compact automatic movement, with hour, minute and seconds functions. Designers were driven by four principles: stability (in rate as well as overall construction), precision, extended running time and pleasing aesthetics. Emphasis was given to including all the necessary components but leaving out any superfluous parts which are vulnerable to wear and tear. Its layout, for example the new efficient gear train or the camera lens-like bayonet mount increases shock-resistance, running stability and makes it easy to service. Isochronism is guaranteed by the silicon balance spring with all its nice attributes, such as resistance to temperature changes, shocks and magnetic fields. As mentioned, the new generation calibre will serve as a stable base for further movements in the future.

Calibre 36 was first installed in the Senator Excellence series. The look is simple yet very elegant and sophisticated. The red gold version has a light coloured dial with silver-grained lacquer surface, laser-cut, galvanised black indexes, Roman numerals at 6 and 12 hours and Arabic minute scale in red. It is available in stainless steel with black Arabic minute numerals. A totally different style is achieved by a black dial and SuperLuminova filled hands and Arabic hour markers. The hands are classic: long, slim poire hour and minute pointers and a filigreed seconds hand with a tiny double-Glashütte logo. Pforzheim produced other noble dials for the Lady Serenade collection of Glashütte Original. The line contains 36mm modest automatic timepieces for ladies with refined taste. The dials of the novelties are either black galvanized and sunburst finished or mother-of-pearl. The first is adorned by rose gold or steel appliqués, corresponding to the case – both versions come with and without diamonds on the bezel. The mother-of-pearl dial is fitted with rose gold appliqués and the metal re-appears on the bezel, too. The case is made of stainless steel, which goes nicely with the iridescent mother-of-pearl. This also has a diamond-set version.

The movement is the 4Hz automatic 39-22 with date function. The three-quarter plate, the logo-shaped rotor and the escapement with the Swan-neck fine adjustment device can be seen over the sapphire crystal on the back. 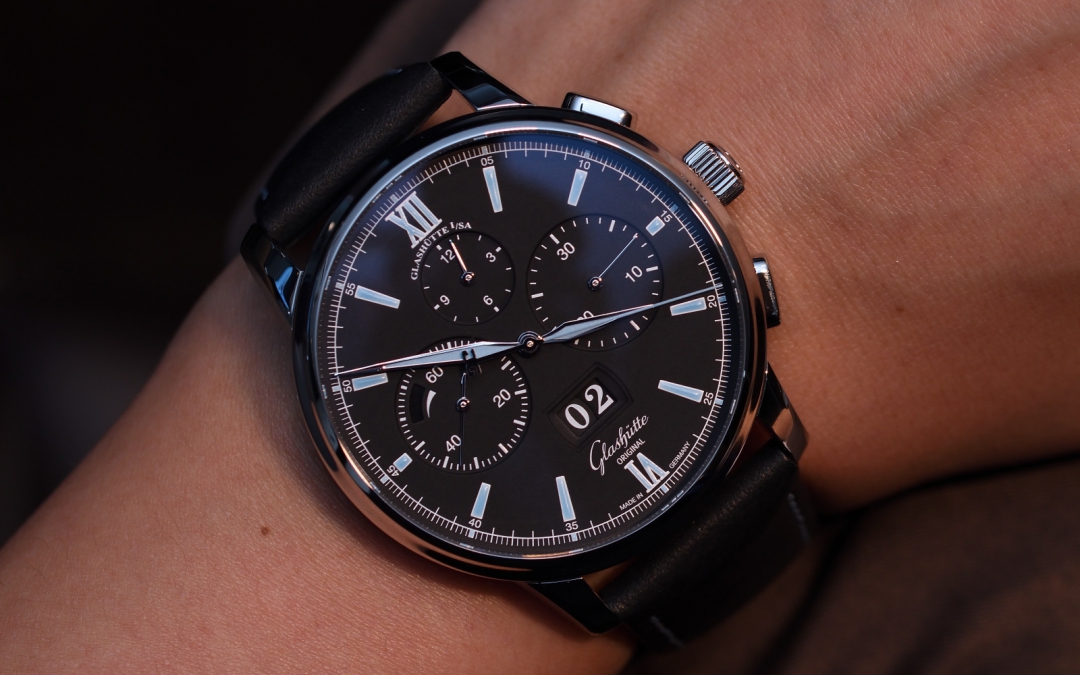 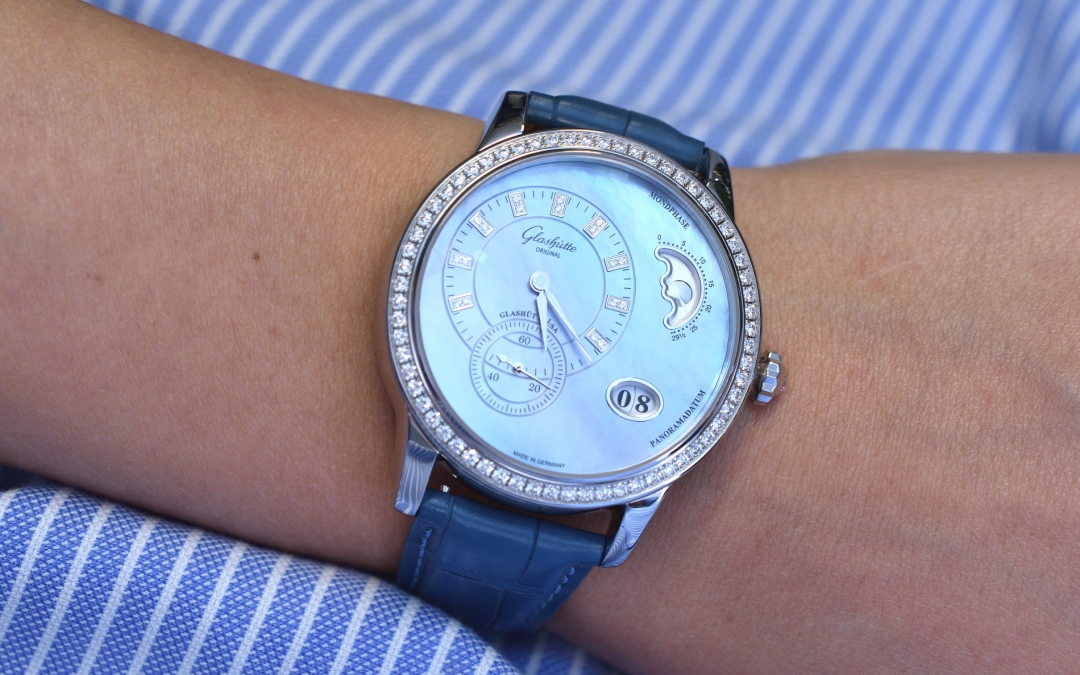 Glashütte Original Manufacture tour – Watch selection Last week I visited Glashütte Original in their hometown. In the previous article we talked about how the watch industry and fine-mechanical engineering brought the people of the Saxon valley back from poverty to world-wide recognition. In this one, we selected a few timepieces. 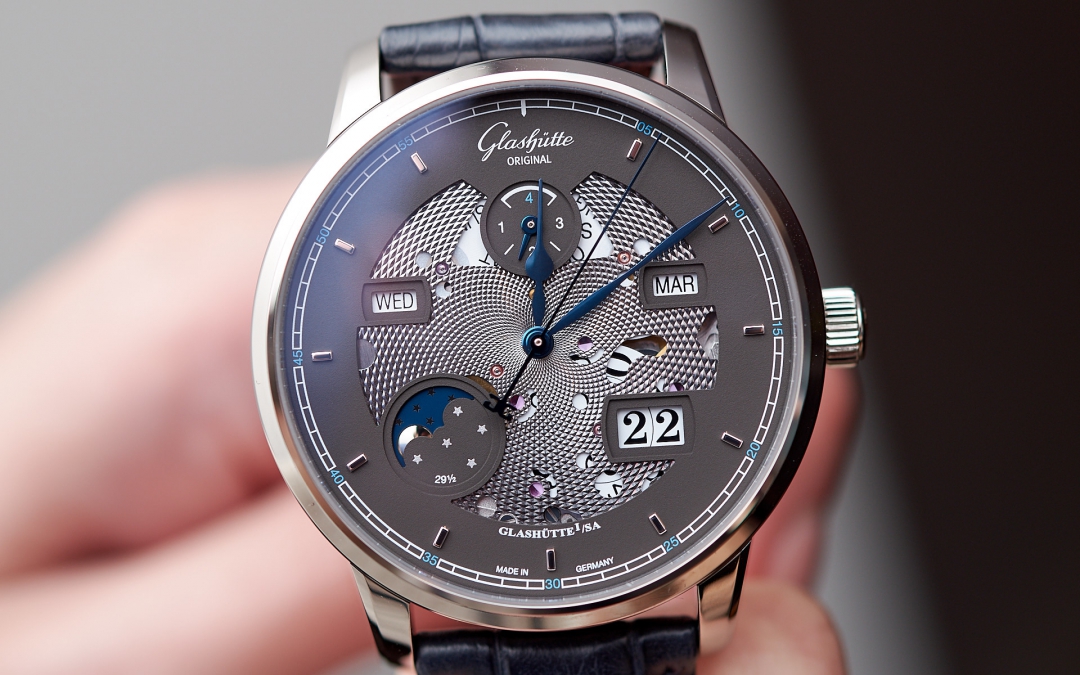 Glashütte Original at Baselworld 2018 This year Glashütte Original brought newly designed versions of its successful classics. The two most interesting novelties were the Senator Excellence Perpetual Calendar in white gold and annual editions of the Sixties and Sixties Panorama Date models with striking green dials.