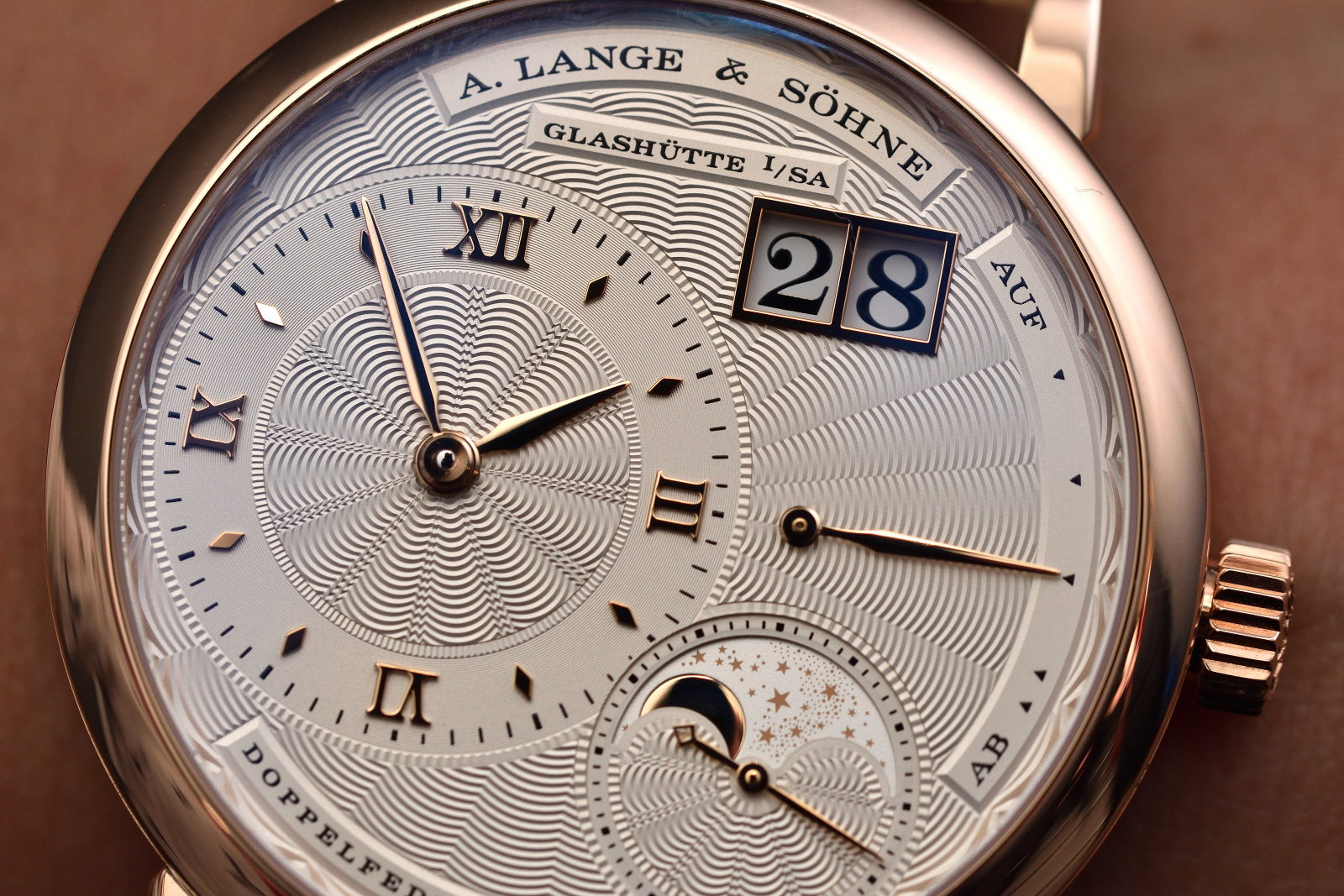 In this series we showcase mechanical and artistic wonders that were especially designed for women and others originally for men that come alive on spirited ladies’ wrists. The Geneva watch week in January always brings new options for women demanding artistic and technical excellence in a timepiece. We collected some that might interest you too.

I find many A. Lange timepieces attractive on female wrists. The Saxonia Moon Phase, the Saxonia Thin, the 1815 or the new 1815 Annual Calendar all lend timeless elegance to women too. In 2015 at the Watches and Wonders Hong Kong the Little Lange 1 was launched for women with a mother-of-pearl dial and finely structured calfskin straps in pastel colours.

This year the Glashütte manufacture presented another dedicated timepiece for ladies, with a jumping outsize date complication and a moon-phase display. The L121.2 manually would movement of the Little Lange 1 Moon Phase is based on the L121.3 introduced two years ago. Once the calibre is correctly set, the moon-phase display only needs to be corrected by one day every 122.6 years.

The layout of the dial (the subdials for the hours-minutes and for the moon-phase display, the outsized date and the up/down power reserve indicator) is the same as on the Lange 1 Moon Phase, but in a smaller 36.8-millimetre pink-gold case.

Valuing aesthetics, balances, forms, finishing, simplicity and fine mechanisms, I am not sure if all the timepieces targeting ladies should be adorned with typical “feminine” decorations. Nevertheless, A. Lange stopped still within the safety zone and the Little Lange 1 Moon Phase became not overwhelmingly feminine: the “argenté-coloured” gold guilloché dial (akin to the pieces in the Lange 1 20th Anniversary Set from 2014) is in harmony with the hue of the pink gold case, the similarly argenté-coloured lunar disc and with the white alligator leather straps. 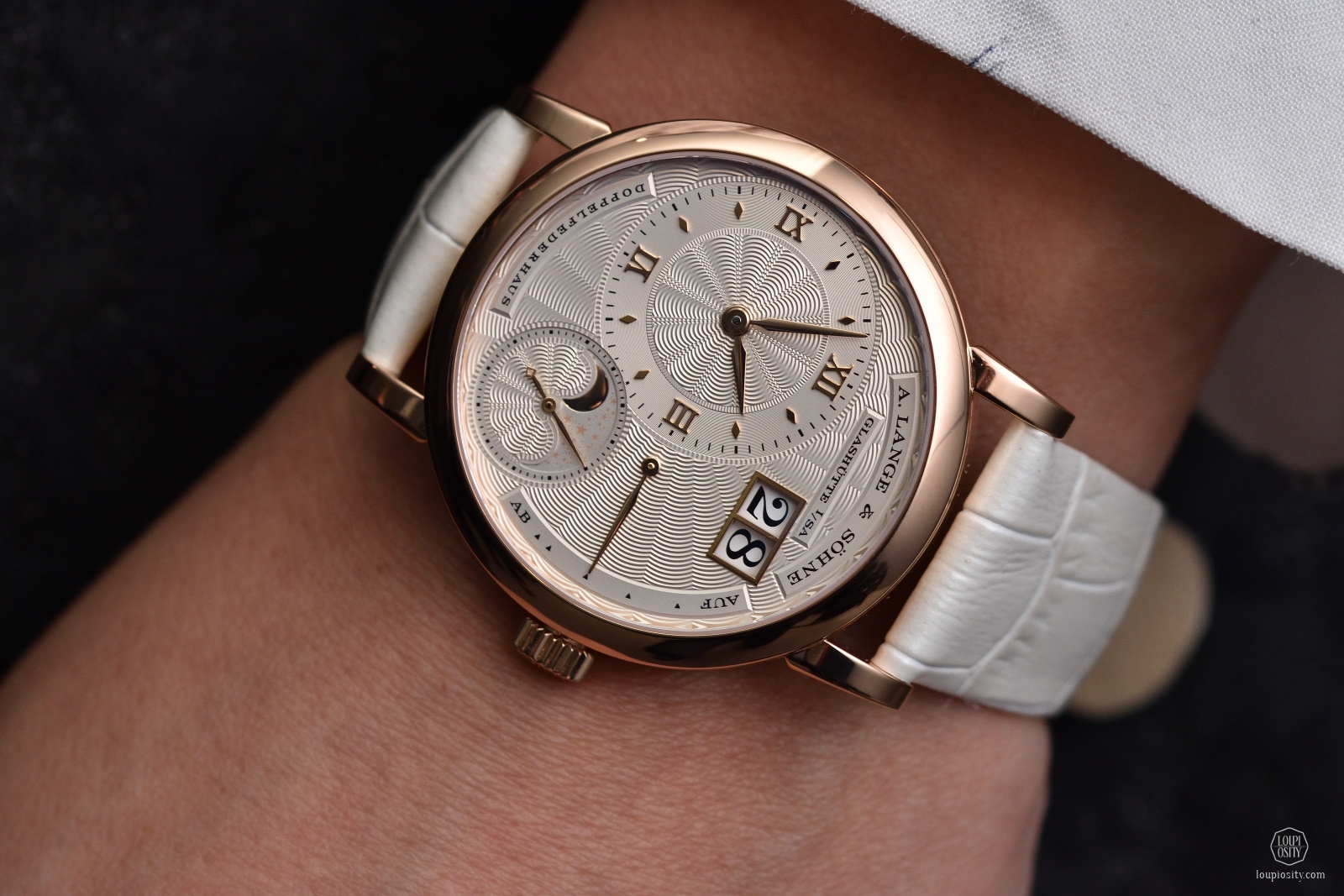 My first encounter with a Bovet ladies’ timepiece happened at the Jewellery Arabia exhibition in Bahrain about 4 years ago. The Récital 9 Miss Alexandra Tourbillon was a “love at first wrist-shot”: with a gorgeous and well-balanced dial in an oval-shaped case, which is small enough to fit beautifully on a woman’s wrist, but large enough to include a significant mechanism too. The mechanical hand-wound movement includes a precision moon phase function, which is illustrated by a cartographically accurate engraved moon face. This model won over the hearts of many people, no wonder that Bovet continued to include female pieces in their collection.

This January in the Salon of Bovet we met with Miss Dimier, the “every-day” timepiece by Bovet (in Bovet terms) that follows the oval shape of the Récital 9 or 11 but is somewhat smaller. The stainless steel case is decorated with 52 round cut diamonds. The external ring of the dial is lacquered in opaque blue and set with 12 diamonds to mark the hours. The inner circle is satin-brushed and PVD-coated in blue – the two different techniques and the two hues of blue give a sophisticated appearance. A small, but truly “Bovet” detail is the heart formed by the overlaying hands.

The Récital 19 is brought alive by the automatic 11DA17 manufacture movement with a 3-day power reserve. 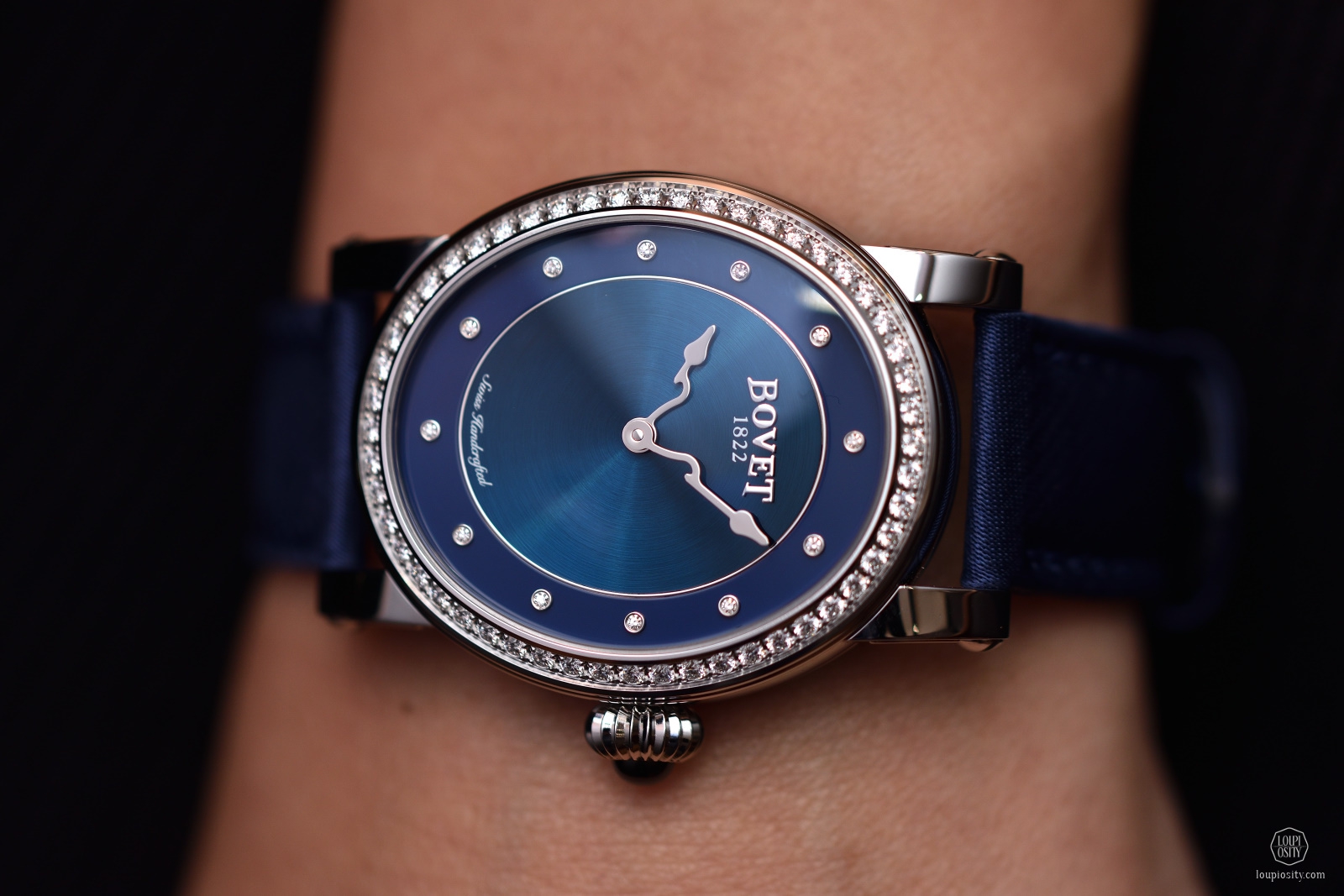 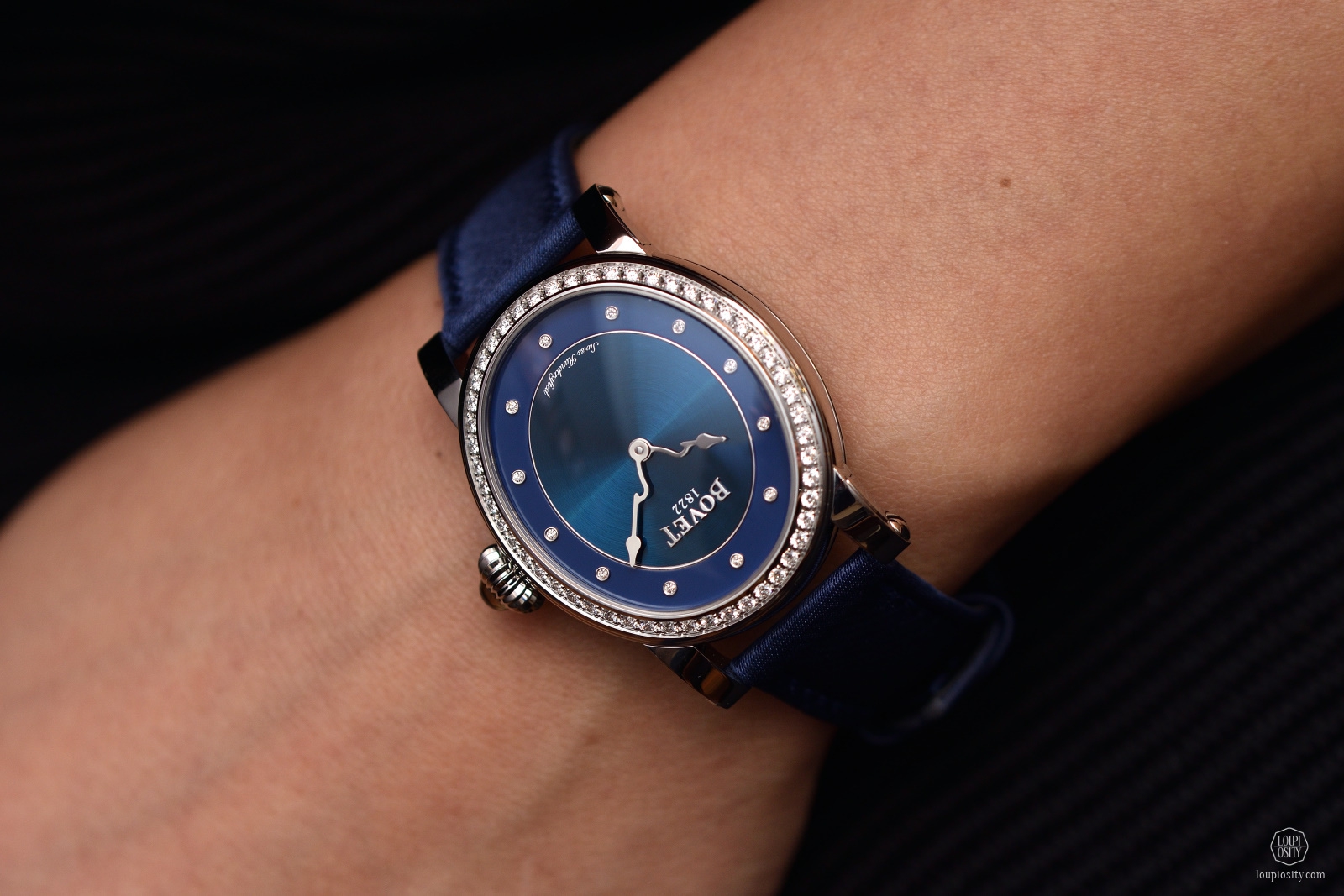 The Girard-Perregaux Tourbillon with Three Gold Bridges Lady was already in our “Girls don’t just wanna have fun” series. The new Neo-Bridges was made for men, but despite its size it looks cool on women’s wrists, too.

In the 19th century the company was particularly famous for its research made in connection with the manufacture of escapement systems. One of their tourbillons won an award at the Paris World Exhibition in 1867. In 1889 they created the now iconic GP piece, the Esmeralda Tourbillon with Three Gold Bridges, which was rewarded with a gold medal. This piece is the inspiration for the current “Bridges” collection of the brand. The row of great “haute horlogerie” timepieces includes the Tourbillon With Three Gold Bridges in 41mm, the Tri-Axial Tourbillon or the Neo-Tourbillon. With the latter the brand’s intention was to make the three bridges slightly more contemporary and more edgy which they achieved using the PVD-coated titanium material.

The Neo-Bridges presented in 2017 follows the contemporary design idea – or, as Girard-Perregaux calls it, the retro-futurist style. There is no “separate” dial, since the GP08400-0001 self-winding movement and the micro-rotor at 10 o’clock are integral parts of the design. On the lower half of the dial there is an exposed balance wheel instead of the tourbillon. The watch has only two of its hallmark bridges rather than three. Yet, it still bears the characteristics of the Bridges collection in a “grey & dark” style with the brushed titanium case. 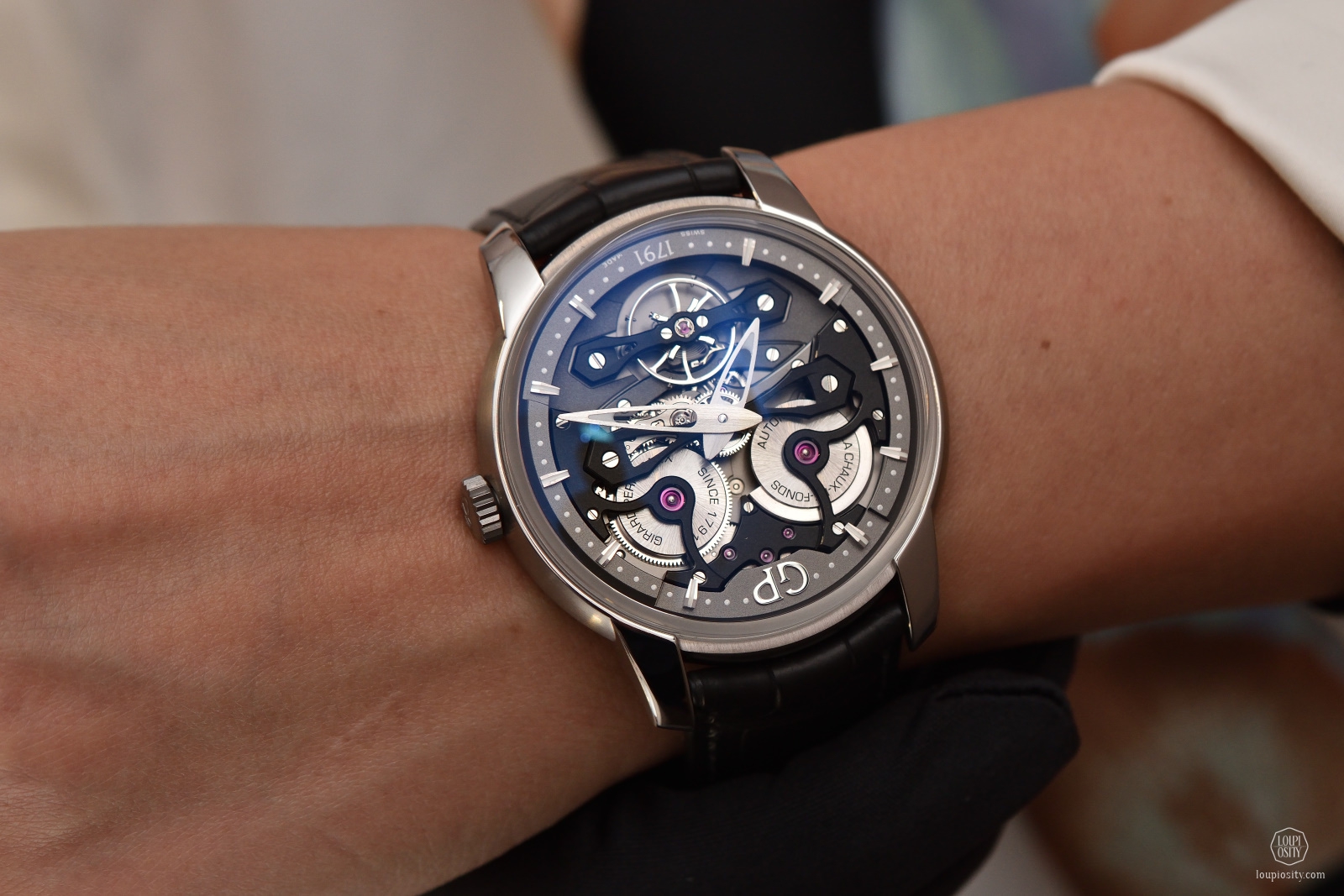 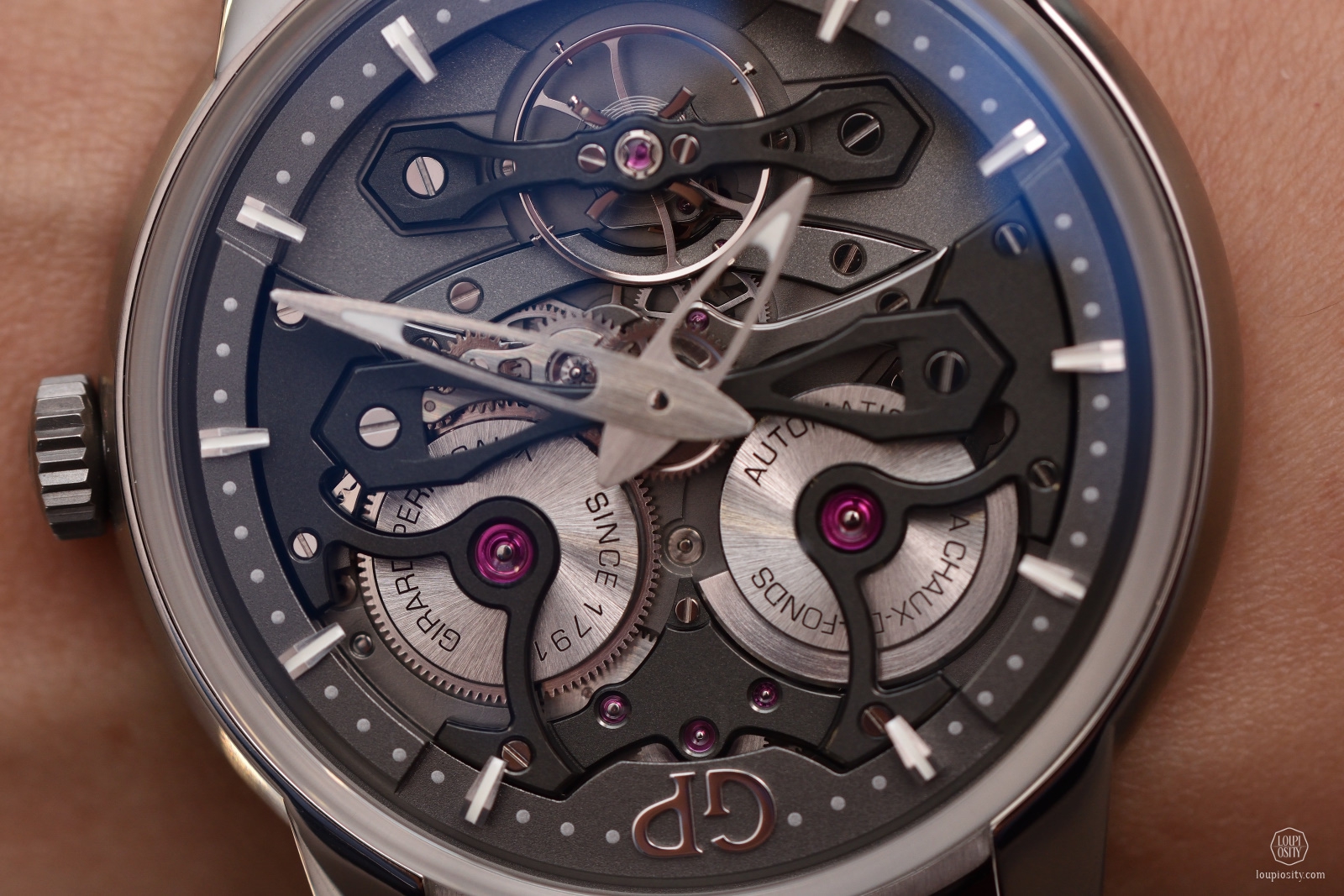 The Jade collection, introduced in 2013, has a distinctive “woman-friendly” feature in the form of an innovative crown design, which saves the manicure. It does not have to be pulled for winding the watch, setting the time, or adjusting the date. Just select the function with the pusher at 4 o’clock and turn the crown.

The model, built on the UN-310 calibre, has already had nice variations, but in 2017 Ulysse Nardin introduced two beautiful artistic models inspired by the underwater world. The Jade “Jellyfish” in white gold and the “Lionfish” in rose gold perfectly illustrate an important “savoir-faire” of fine watchmaking: the enamelling. In September 2011 Ulysse Nardin SA announced that it had acquired Donzé Cadrans SA, the specialist luxury watch Manufacture dial enameller. Since then the Cloisonné or Grand-Feu enamel became a common decoration technique applied on Ulysse Nardin timepieces.

Two similar, but still different techniques:
Champlevé-enamel: the moist powder enamel is applied to the engraved patterned metal surface, thus the enamel seeps into the patterns, and it is then fired. During the creation of the base metal pattern, extremely high quality requirements have to be met, because even the smallest unevenness can prevent the appropriate binding of the enamel. When the surface has cooled, it is polished with very fine sandpaper. The un-carved portions of the original surface remain visible as a frame for the colourful enamel designs. The Cloisonné technique is almost identical, but in this case there are small wires added on top of the metal to create the enamel compartments. See more about this here.

The Lionfish (Pteoris) native to the Indian- and Pacific Ocean has many sub species. These marine animals are known for their ornate beauty, venomous spines, and unique tentacles. The dial of the Jade timepiece is inspired by the shapes and colours of this creature – different hues of red, orange and blue are interpreted into the little enamel art-piece. You can discover more about this art of Ulysse-Nardin here. 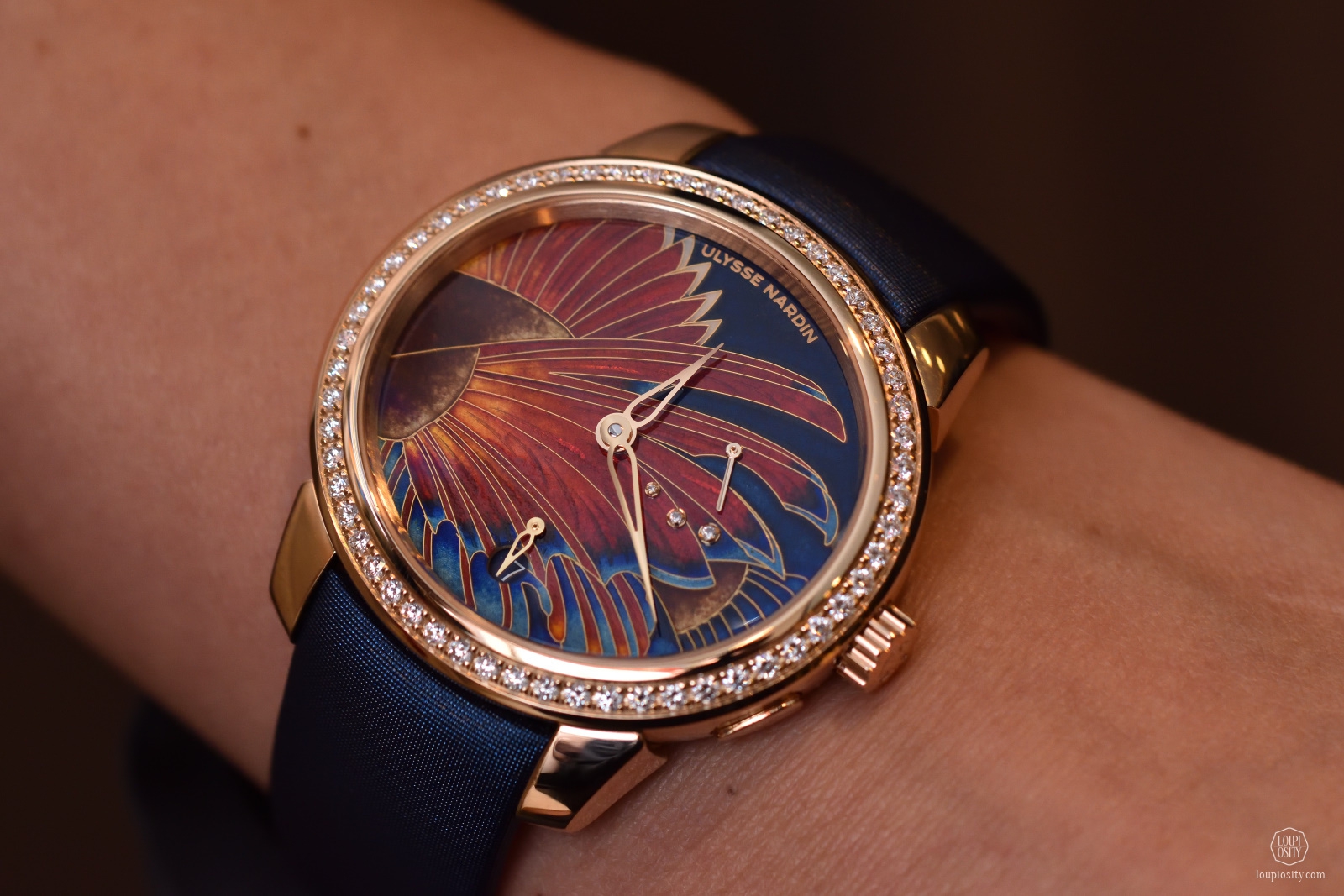 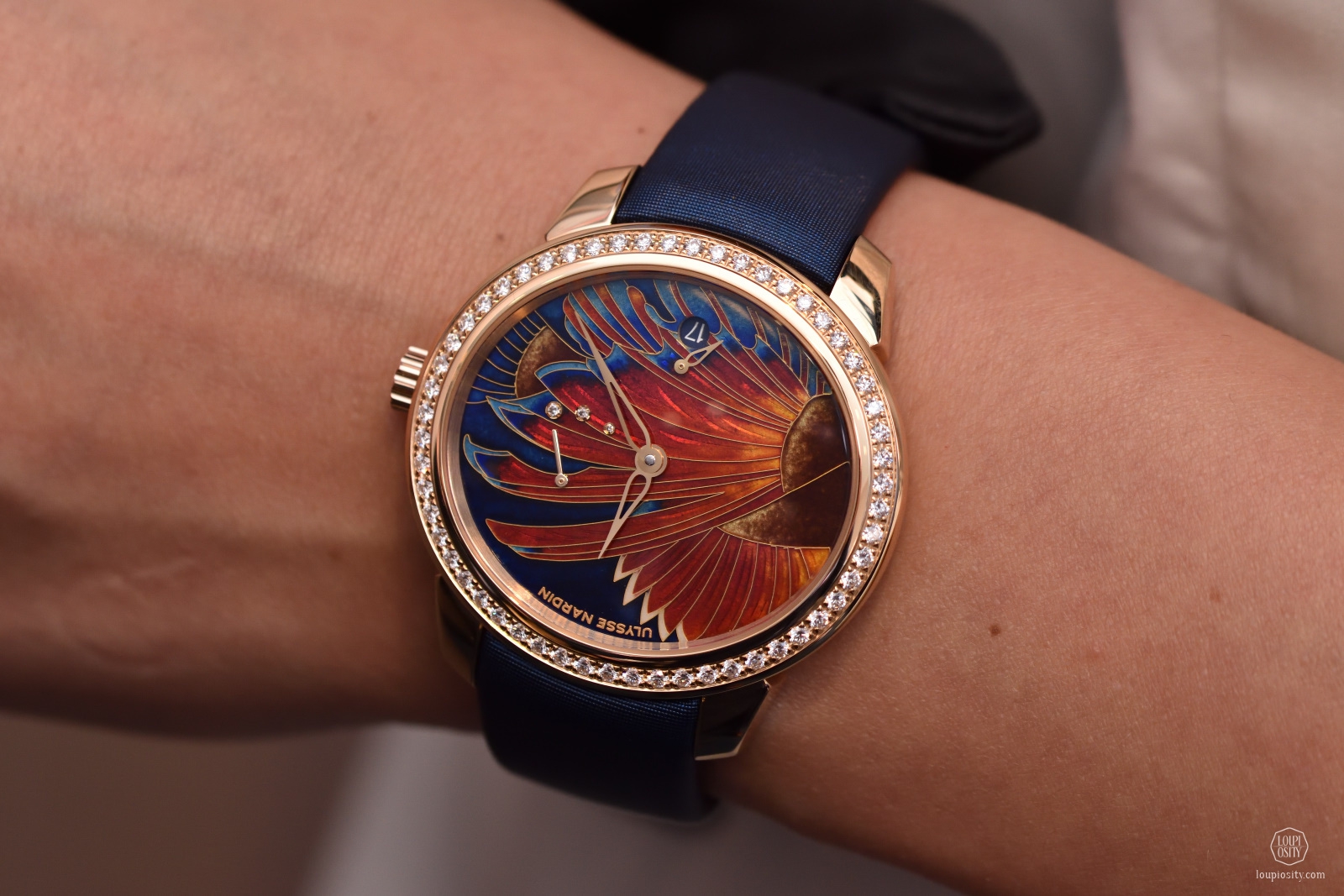 Girls don’t just wanna have fun – Vacheron Constantin, Part… In this series, we showcase mechanical and artistic wonders that were specially designed for women and others originally for men that come alive on spirited ladies’ wrists. Vacheron Constantin presented wonderful novelties to women at the online Watches and Wonders event in April. Finally, we were able to try them on.Frederique Constant Slimline Moonphase Manufacture This November, Frederique Constant came out with new models in its precious Manufacture line for women looking for a refined design and great value combo. The attractive novelties join the Slimline Moonphase Manufacture sub-collection in three colour versions.Zenith Watches & Women This October Zenith puts extra emphasis on women with two meaningful releases - the Chronomaster Original in a new version and the DEFY Midnight Pink Ribbon edition. Discover them with us.