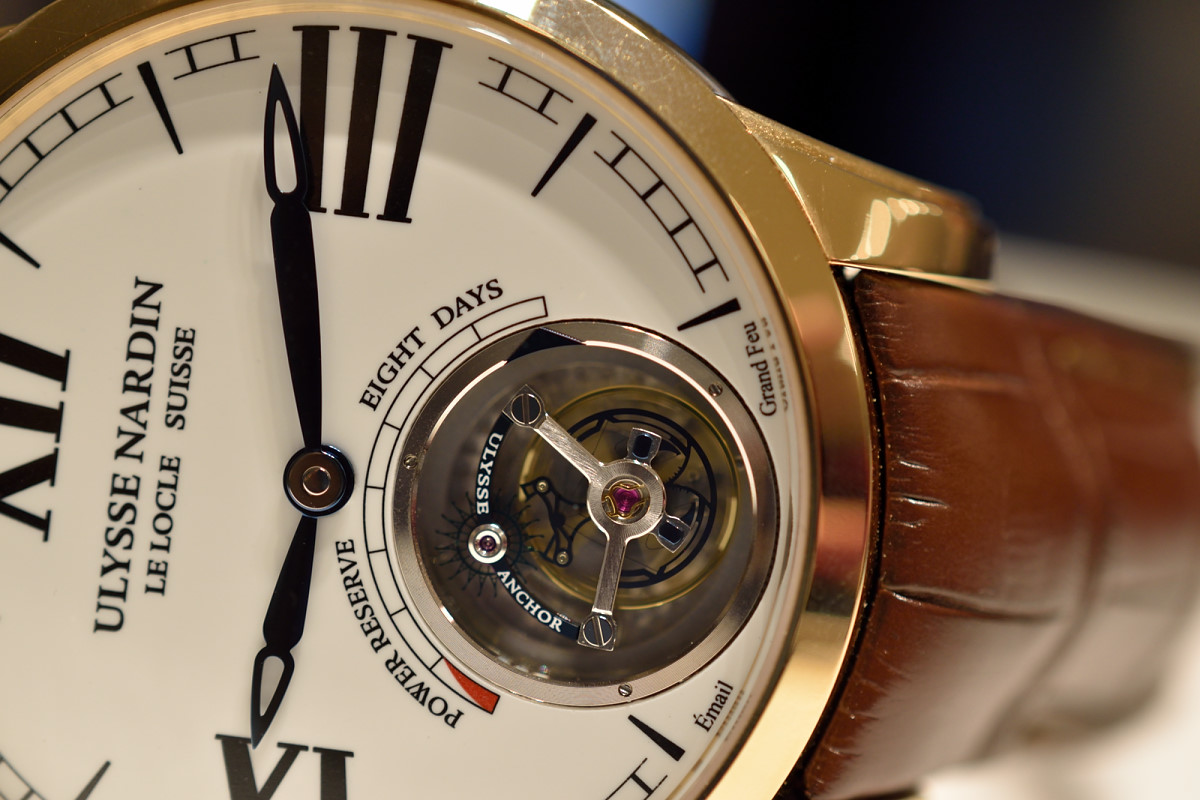 Ulysse Nardin and its Anchor Tourbillon timepiece received great international recognition lately; in October it was awarded Prize of the Year by the International Salon of Haute Horology (SIAR) in Mexico, and won the Prix Orologio dell’Anno 2015 assigned by the Italian magazine L’Orologio. At the 15th ceremony of the Grand Prix d’Horlogerie de Genève (GPHG) the jury chose the watch as the best in the Tourbillon category.

The topic of the last Espace Connaisseur of this year at Les Ambassadeurs was a tiny part of this innovative Ulysse Nardin watch and its technical background.

Timm Delfs started his presentation with some explanations about some key features and mechanisms of mechanical watches. He also talked about new materials and techniques used in fine watchmaking, such as silicon.

We can find silicon (and not silicone – which is a “rubber-like” material, silicon contains synthetic polymer) on the periodic table of the chemical elements, under the symbol Si and atomic number 14. It is known as a semi-metallic or metalloid, bearing several characteristics of metals. Jöns Jacob Berzelius (1779-1848) was a Swedish chemist, one of the founders of modern chemistry. He is also known to be credited with identifying the chemical element silicon, around 1824. It was later given the name silicium. It is dark grey and has a shiny, crystalline appearance.

Silicon is a semiconductor (the electrical conductivity of a semiconductor material increases with increasing temperature). It is solid at room temperature, with relatively high melting and boiling points of 1414 and 3265°C. Interesting, that it has a greater density in a liquid state than in a solid state, so it has the unusual property that (like water) it expands as it freezes.

Its applications are quite wide; in the area of special alloys, ceramics, glass and electronics. Since 2000 silicium has become more and more popular in mechanical watch movements, because of its desirable properties: it is thermally stable, shock resistant, and requires little to no lubrication, and it is lighter and harder than steel. Manufactures are mainly creating hair-springs, escapement wheels and forks from silicon. (We should add, that there is also a scepticism in the market about this material; currently engineers do not have really long term results and comparative analysis of the durability of these watch parts. Some manufactures declared that they would not be using silicon, since it is a material that cannot be repaired.)

Most of these parts for watch movements are manufactured using the LIGA (Lithographie, Galvanoformung, Abformung/Lithography, Electroplating, and Molding) technique and DRIE (deep reactive-ion etching).

As we learned from Stéphane von Gunten (Laboratory and Technologies Manager at Ulysse Nardin) Ulysse Nardin pioneered these applications, starting with the Freak watch in 2001, with the use of silicon for two escapement wheels.

Ulysse Nardin and Mimotec (a leader in the fields of microtechnology and micromechanics, specializing in the manufacture of micro-components using the “LIGA” process) together founded Sigatec, a manufacture of silicon micro-parts. The outcome of eight years’ of collaborated research and development, the constant Ulysse Anchor escapement is made entirely of silicium.

Visible through a large opening in the dial at 6 o’clock, it is encircled by the indication of its power reserve of at least 7 days with twin mainspring barrels. The caliber UN-178 is housed in a rose gold or white gold case – with a white Grand Feu enamel dial – each in a limited edition of 18-18 pieces. 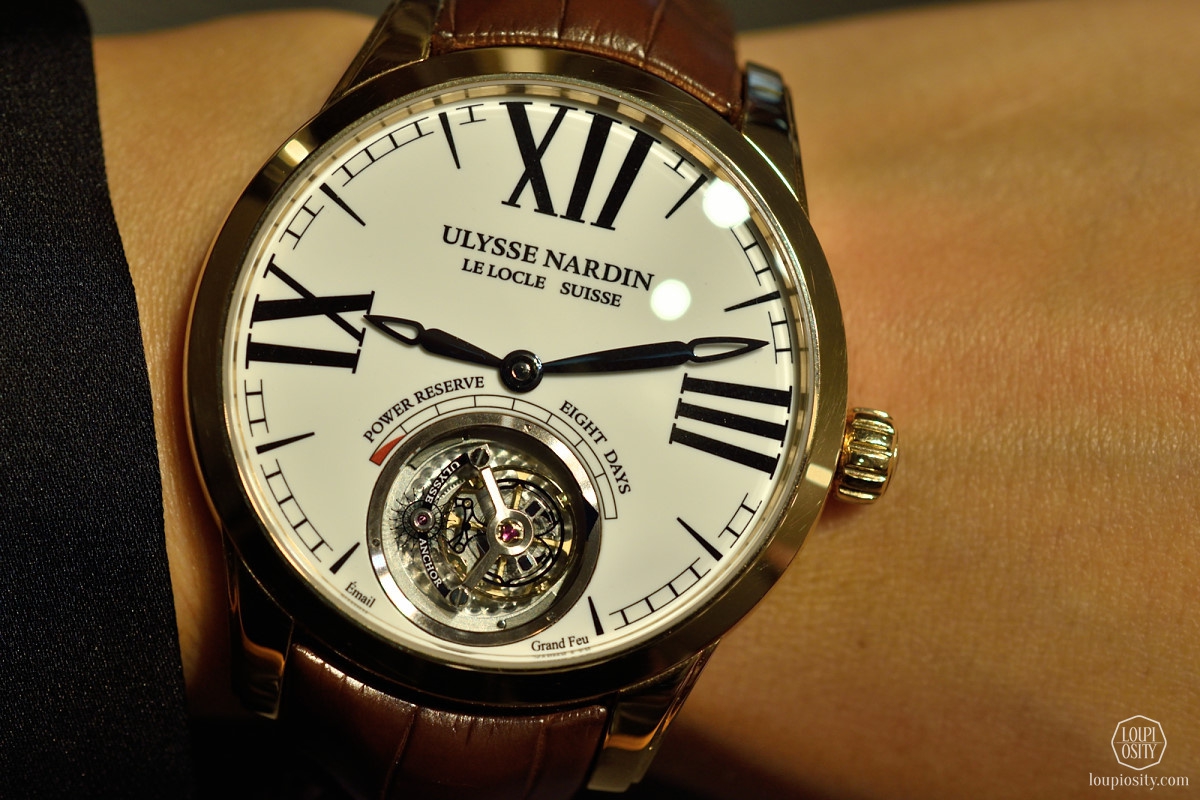 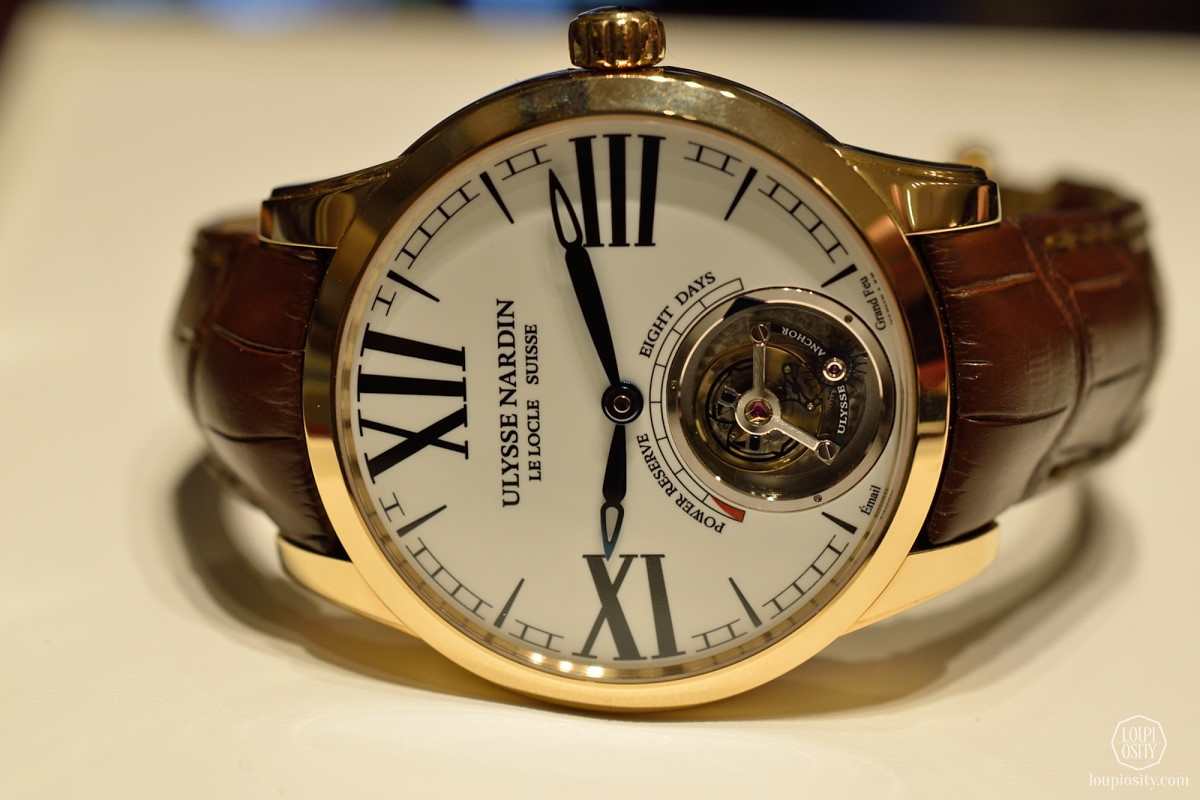 The new constant Ulysse Anchor escapement is made entirely of silicium, which means it is flexible. It has a circular frame with a pallet fork fixed in the centre, supported in space on two blade springs less than a tenth of the thickness of a hair in diameter (100 µm/10). Please visit Ulysse Nardin’s site for the technical details.

Timepieces from the Ulysse Nardin collection

I couldn’t resist to browse through a few other models of the brand, such as the GMT Perpetual or the Jade. Latter is the signature timepiece with self-winding mechanical movement in the Classico collection for ladies. The Stranger is an in-house developed musical mechanical watch. The limited edition timepiece plays the melody “Strangers in the Night” — the legendary song made famous by Frank Sinatra in 1966.

Ulysse Nardin celebrated it partnership with Artemis Racing and the 35th America’s Cup with a special Marine Diver. The watch has deep ocean blue color combined with the signature Artemis Racing yellow. It is a limited edition of 250 timekeepers. 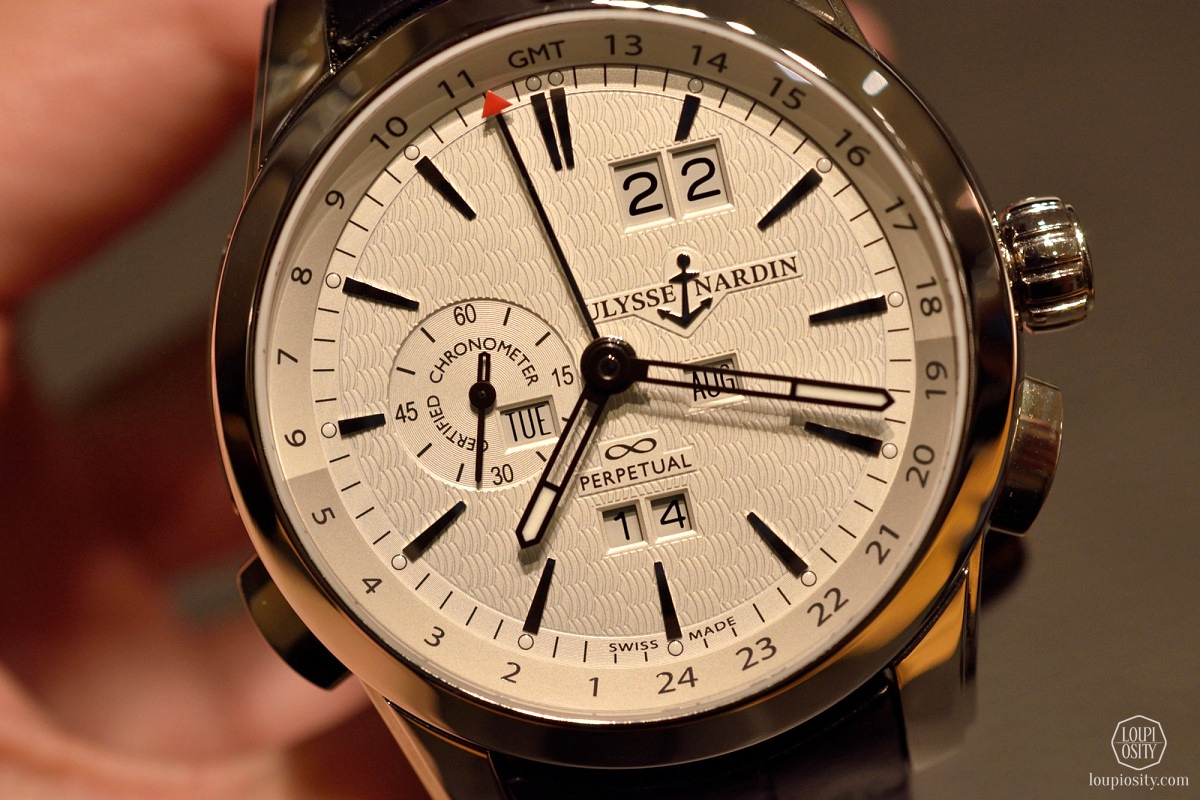 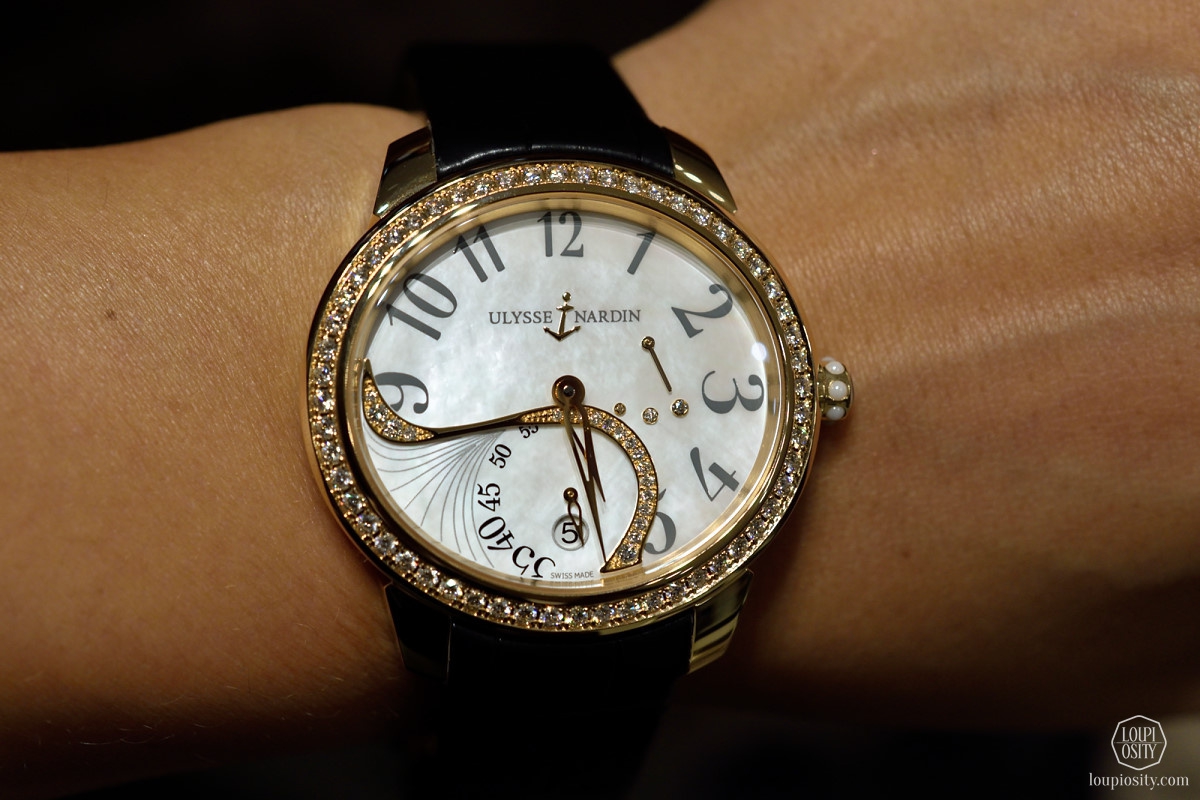 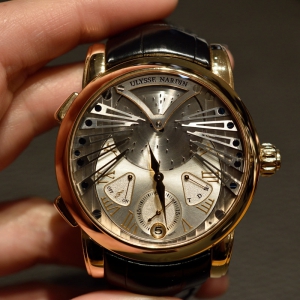 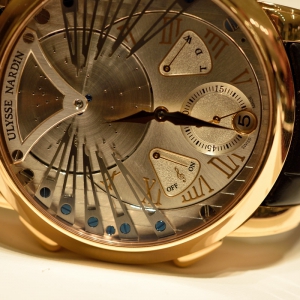 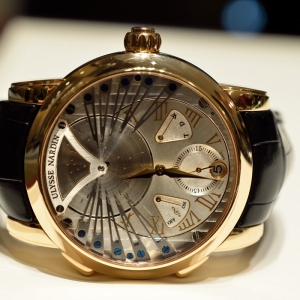 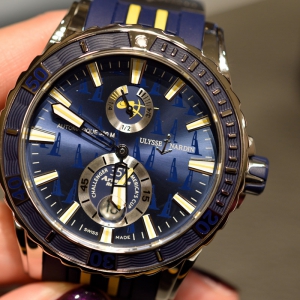 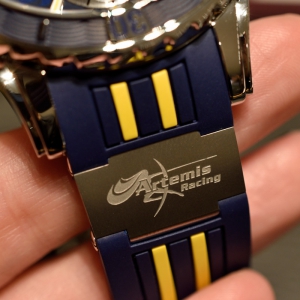 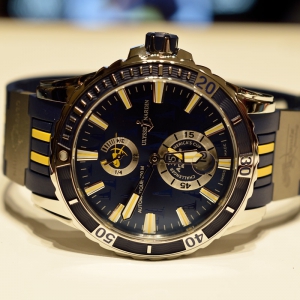 Ulysse Nardin 175 - new museum space Ulysse Nardin has celebrated the 175th anniversary of its foundation this year. On 15 November 2021, the company opened its new showroom and museum in Le Locle. We had a private tour with Massimo Bonfigli, Historian of the brand.Beware of Blast During the Geneva Watch Days, Ulysse Nardin showed us the new and edgy Blast collection at the Geneva flagship store.GPHG 2019 The 84 pre-selected watches of the Grand Prix d’Horlogerie Genève 2019 are arriving back from the world tour to Geneva to compete for the ‘Aiguille d’Or’ Grand Prix and the 18 category prizes.