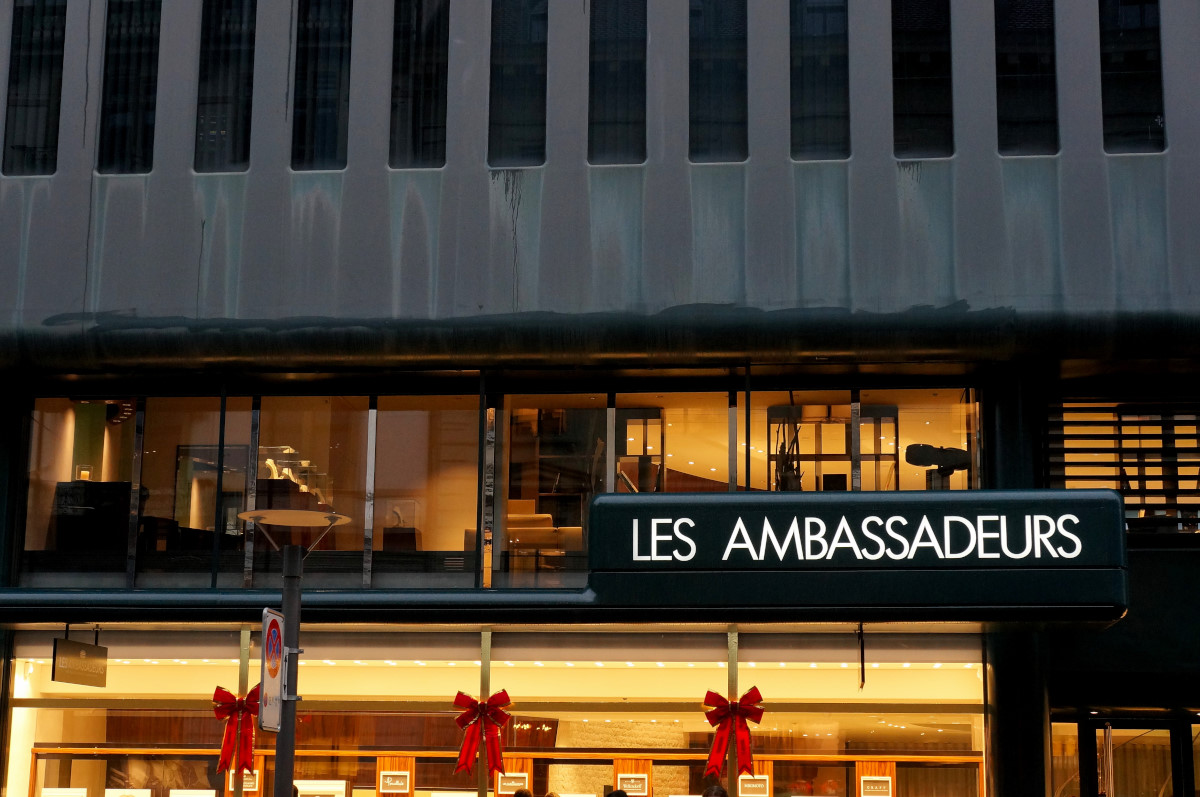 Yesterday I had my first snowy experience this year in Zurich – some people seemed to be happy about it. My life was saved by Hiltl, the cow-friendly vegetarian restaurant not far from Bahnhofstrasse, and by the neighbouring warm-hearted ambassadors of timekeepers. Espace Connaisseur, the bi-monthly club of fine watch lovers assembled on 21 November for a quality evening at Les Ambassadeurs.

Espace Connaisseur centres on interesting topics of watchmaking. Led by experts of the fields, subjects are discussed by all the participants in a cosy setting. This Thursday the welcome of Joachim Ziegler, CEO of the Group Les Ambassadeurs, was followed by two engaging lectures about high complications.

Mr. Timm Delfs guided the audience to “Complications extraordinaires” by classifying and explaining the different complications in a very intuitive manner. As we heard by Mr. Ludwig Oechslin at the Grand Prix d’Horlogerie de Genève exhibition in Dubai recently, complications do not have an exact categorization. As opposed to the one he showed then, which was based on usefulness, Mr. Delfs defined functional groups, such as timing functions, astronomical functions, non-horological functions, etc. As a freelance journalist, Mr. Delfs has been contributing to many publications, including the magazine of the Fondation de la Haute Horlogerie, Financial Times – How To Spend It, Bilanz, Magazine Patek Philippe among others. When talking to him later I got to know that he owns a very funky business in Basel; his shop Zeitzentrale specializes on sundials, astronomical instruments and unusual timekeepers.

Mrs. Carole Forestier, Responsible Création-Mouvement for Cartier, gave an interesting speech about Cartier’s floating tourbillion in the 9454 MC Mysterious Double Tourbillon movement and the 9800 MC Astrorégulateur. What Mrs. Forestier has achieved in the field of fine watchmaking would do a male watchmaker proud. She is the Head of Fine Watchmaking at Cartier, won the Best Watchmaker Prize at the Grand Prix d’Horlogerie de Genève 2012, took part in the creation of engineering masterpieces, such as the Central Chronograph, the Astrotourbillon, the Astrorégulateur and the ID One concept watch, and she is the inventor of many horological patents. In her case the profession is family heritage, and her philosophy is simple: seeking innovative and interesting solutions or showing more efficient alternatives to existing solutions.

She opened with a historical background of mystery clocks. Maurice Coüet, a watchmaking talent who in 1911 became Cartier’s exclusive supplier, created Model A, the famous mystery clock in 1912. In 1920 the movement was developed further and the dual shaft, which turned the transparent discs, was exchanged for a single shaft mechanism debuting first in the “central axis” clock, then in the famous Portique mystery clocks in 1923. The clocks appeared on the desks of the nobility and royalties of the era.

At the SIHH earlier this year, the Rotonde De Cartier Mysterious Double Tourbillon Watch equipped with the 9454 MC Mysterious Double Tourbillon movement was revealed. The mystery wrist watch has received the Geneva Seal. Mrs. Forestier talked about the tourbillon that floats in the central transparent space, turning around its own axis every 60 seconds, whilst performing a complete rotation in its universe every 5 minutes. In spite of the fact that the power demands to rotate the double carriage along with other parts of the movement have been significantly increased, the efficiency of the entire watch mechanism and the 1.35 grams of the complete tourbillon assembly made a decent 52 hours power reserve possible. 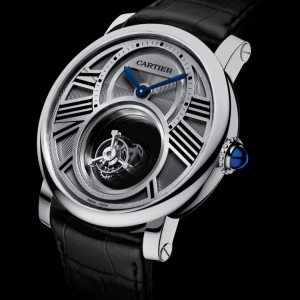 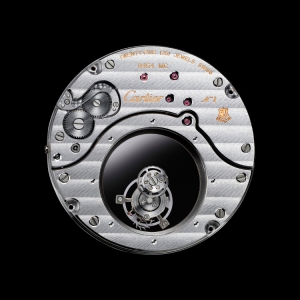 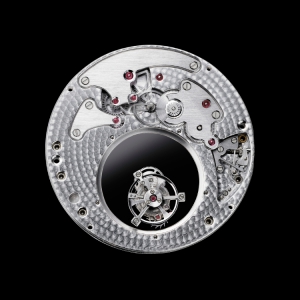 In 2011, by mounting the escapement (the fourth wheel, the escape wheel, the balance and the hairspring) on the rotor, Cartier brought a new engineering design to avoid the effect of gravity. The vertically “stable” escapement debuted in the 9800 MC Astrorégulateur movement. As opposed to the tourbillon, which averages out the rate variations in vertical positions, this structure produces no variations at all. The oscillating weight has been placed on the dial-side and is visible along with the escapement components fixed to it. To subtract the oscillations of the rotor from the gear train a differential mechanism was introduced in the power flow. The Rotonde de Cartier Astrorégulateur has inherited the niobium titanium alloy the light and shake absorbent case material from the Cartier ID One concept watch. 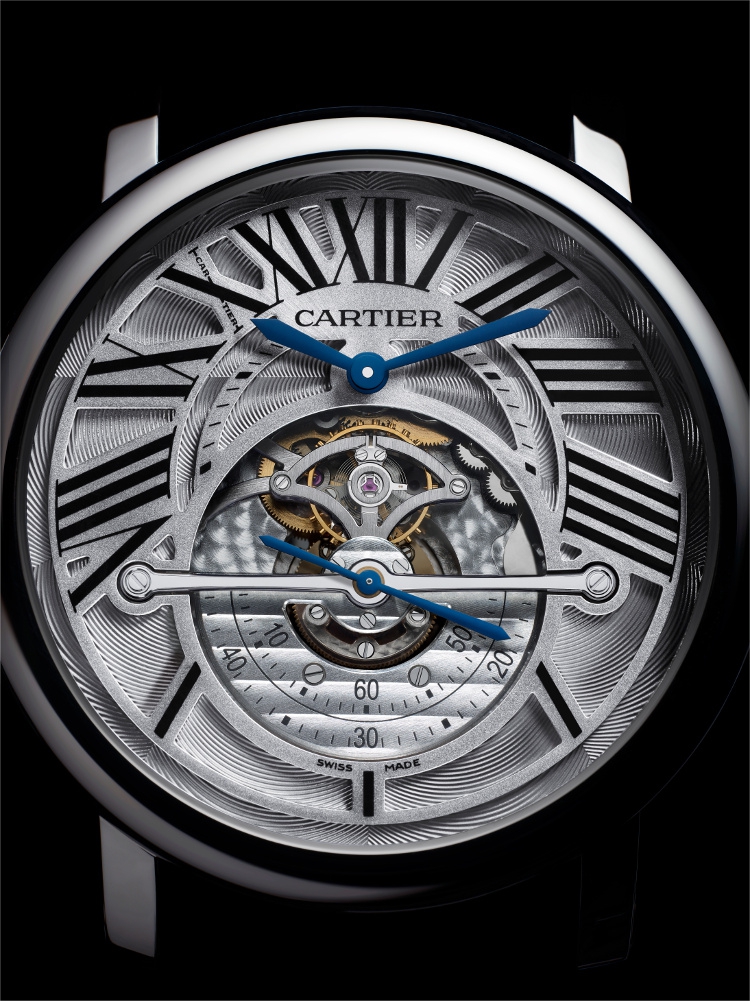 This evening I also went for some “treasure hunting” with Michael – always an exciting activity at Les Ambassadeurs.

The public already had a chance to see the first Petite Heure Minute Relief Seasons models from the Jaquet Droz Les Ateliers D’Art collection at Baselworld. An edition issued since then is now available at the boutique. The 18-carat case and the red gold oscillating weight with white mother-of-pearl dial has a different motif: a hand engraved and patinated 22-carat red gold bird appliqué with its wings spread wide open above the nest and the nestling. 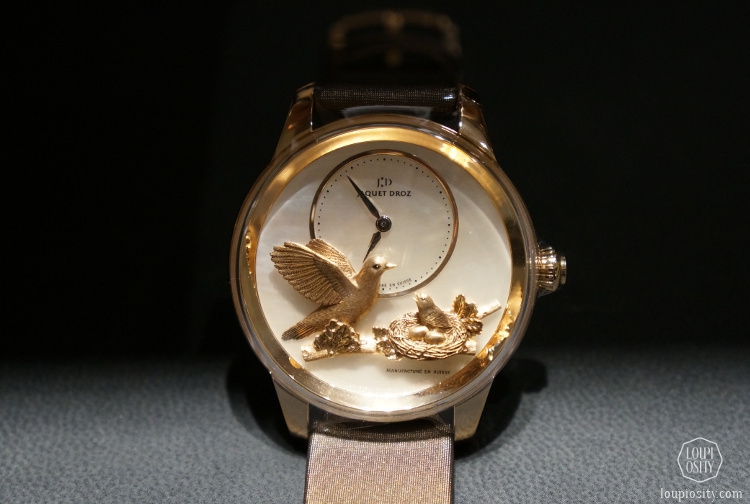 The Petite Heure Minute Relief Dragon is another masterpiece from Jaquet Droz. The main motif of the limited edition produced for last year’s Year of the Dragon was a beautifully elaborated dragon that emerges from a black mother-of-pearl surface of water, yet the submerged part of its body winds around the back surface of the watch. The legendary creature is made of 22-carat hand engraved yellow gold and has a magic pearl (made from ruby), which symbolizes the power and wisdom of the Emperor. The 18-carat red gold timepiece has a self-winding mechanical movement. 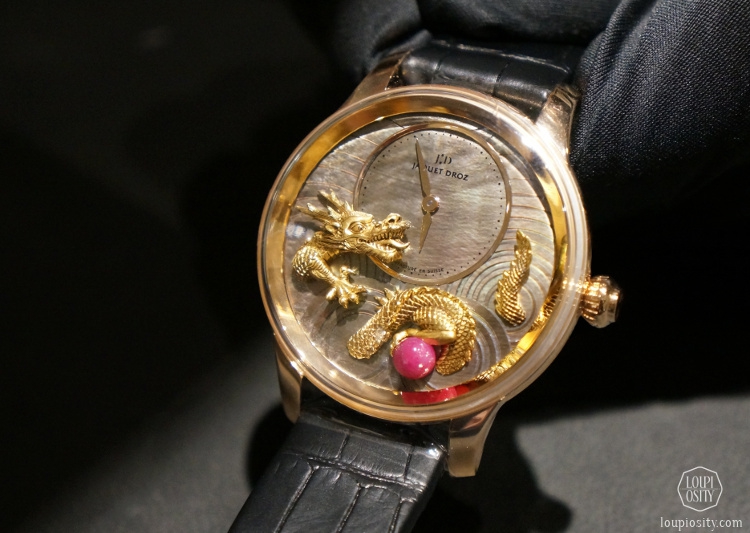 The Ulysse Nardin Skeleton Tourbillon platinum version has a skeletonized calibre with a manual winding movement UN170. On the dial there are black Roman numerals and the hour markers are located on its flange. The tourbillon carriage is at the 6 o’clock is, and at the 12 o’clock, here is a large winding barrel, which stores power for an impressive 170 hours. 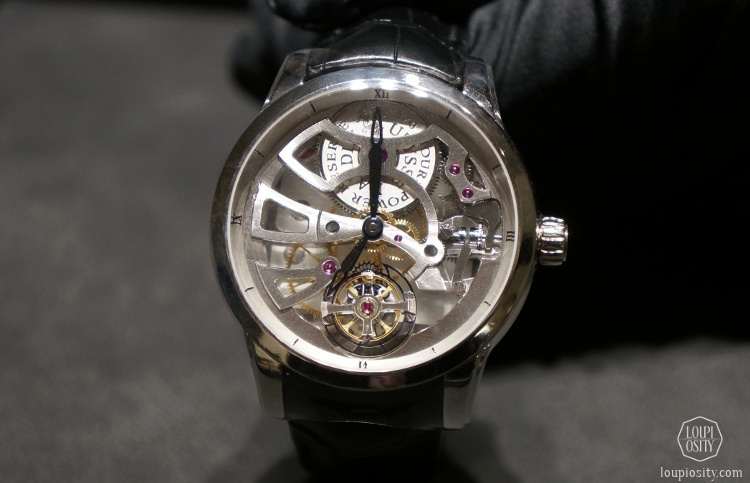 From time-to-time Ulysse Nardin brings joy to the collectors with a truly special model. The Stranger is an in-house developed musical mechanical watch. The limited edition timepiece plays the melody “Strangers in the Night” — the legendary song made famous by Frank Sinatra in 1966. The 45mm rose-gold watch plays the tune every hour, naturally if the wearer wishes to hear it. The song is brought to life by a stainless steel plate, the spikes on it and 10 sound blades. The automatic watch has two spring barrels, one for the movement and the other to provide energy to the musical complication. 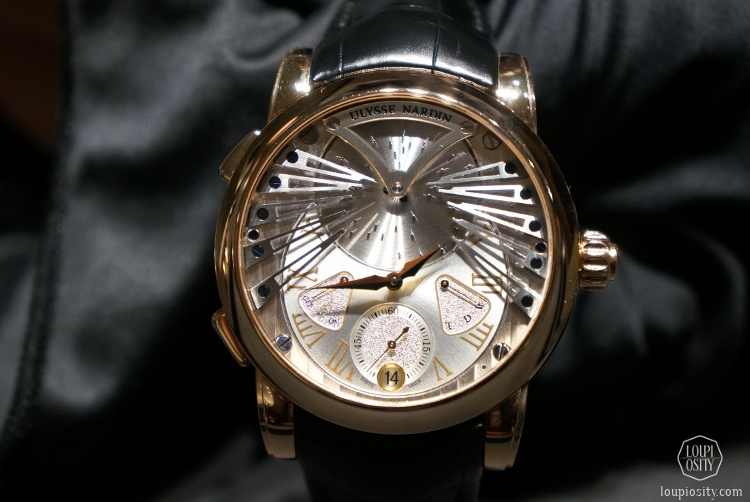 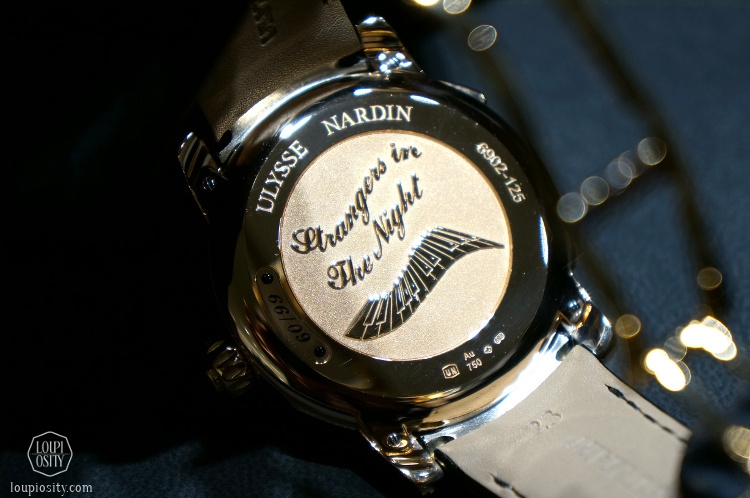 The Bell & Ross watches are quite characteristic, and the tourbillon models are not exactly typical of the brand. Nonetheless after the skull-motif BR01 Tourbillon Airborne Watch here is the Limited Edition BR Instrument Minuteur Tourbillon. The case is shaped like a horizontal rectangle in 18k pink gold with carbon fibre dial. The manual winding tourbillon movement with fly-back minuteur and power reserve indicator has approximately 3 days of power reserve.

November can also be nice away from my beloved beaches in Gulf. You just need litres of hot tea and programs like the Espace Connaisseur to light your own sunshine. 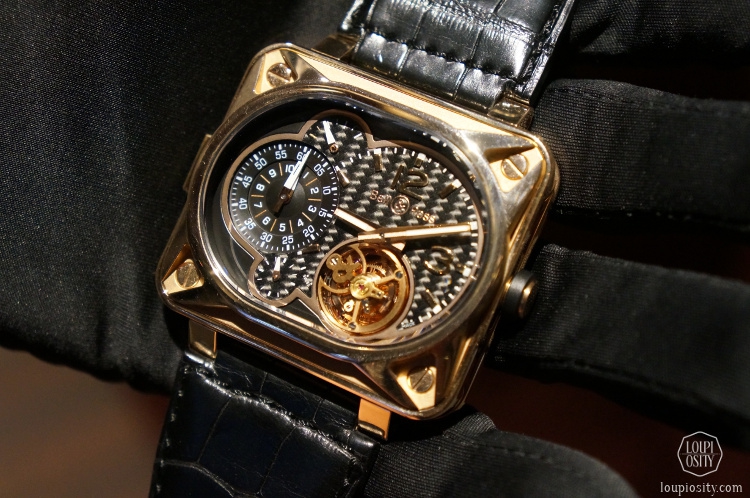 Ulysse Nardin Rainbow collection Ulysse Nardin revealed the Rainbow Collection at this year’s Geneva Watch Days in their boutique, with new models: the Blast Tourbillon Rainbow and the Lady Diver Rainbow.M.A.D.EDITION In June 2021 MB&F offered a special watch to its ‘Friends’, the M.A.D.1, under a different label, M.A.D.Edition. The appearance of the watch on social media stirred the water of the mechanical watchmaking.Interview with Franziska Gsell, CMO & Sustainability… I met Franziska Gsell, CMO & Sustainability Committee Chair, Executive Board Member at the stylish and minimalist IWC Schaffhausen booth during Watches and Wonders. We discussed how the pandemic has changed the way IWC interacts with customers and what sustainability means for the brand.