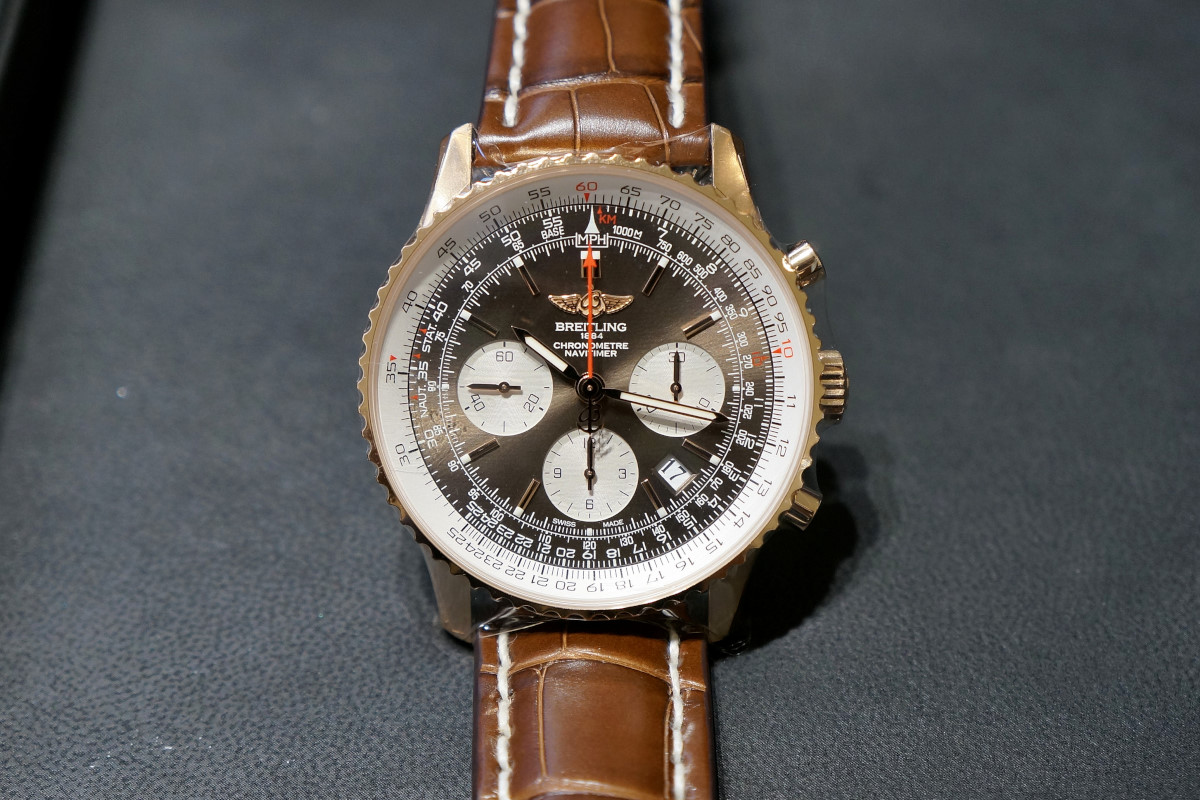 The Zürcher Spring Tastings was held for the second time last week, in the framework of which over 20 illustrious boutiques on the Bahnhofstrasse and local wineries welcomed their favourite customers. In addition to tasting wines and indulging in culinary delights all the brands offered insight into their novelties. I began the tour with a “watch-taster” at Les Ambassadeurs. Without being exhaustive, I would like to highlight some of the pieces, which recently arrived in the boutique.

Breitleing’s Emergency is not a new but definitely a very exciting watch. The brand is primarily known for its pilot watches, however in the mid-90s the introduced a timepiece that was able to transmit emergency signals on 121.5 MHz analogue frequency. The 2013 Breitling Emergency 2 is fitted with a dual-frequency alarm system and in addition to the 121.5 MHz it gives signals at 406 MHz too. The 406 MHz digital signals are received by the satellites of the COSPAS-SARSAT international emergency system, thus they can find the owner by the timepiece’s signals virtually anywhere.

Naturally the production of such a gadget required special innovation. In addition to a miniaturized dual frequency transmitter and an integrated antenna system Breitling’s engineers developed a new rechargeable battery too.

Emergency devices transmitting satellite signals have been used by people whose lifestyle differs from the norm and who may require rescue from the middle of a desert, the sea, from the top of a mountain or a ravine. However this is the first ever wrist-worn dual frequency PLB, or Personal Locator Beacon.

Of course it is advisable to use the watch only in real life-threatening danger; if the signal is deployed unnecessarily covering the cost will dig a deep whole in anyone’s pocket. However when used with just cause, Breitling provides a new watch for the owner. 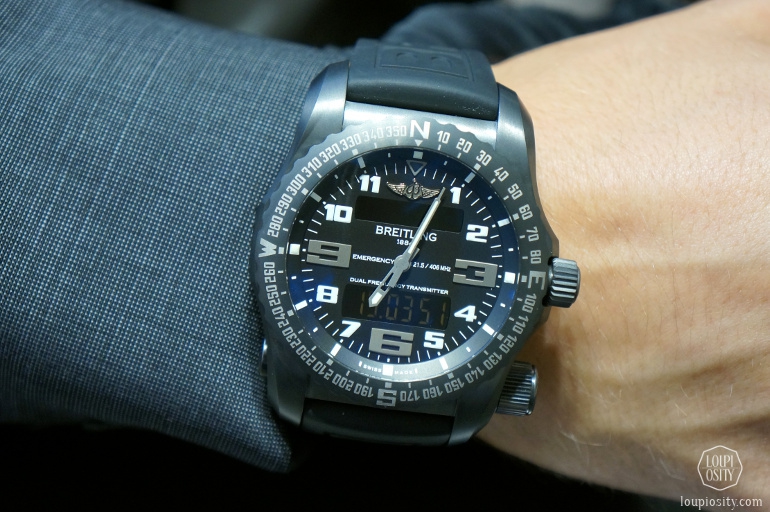 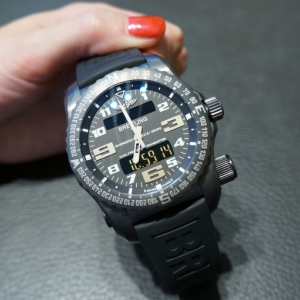 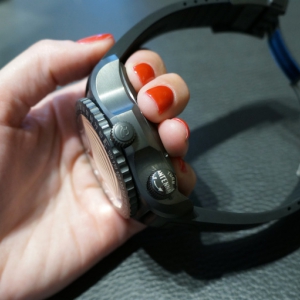 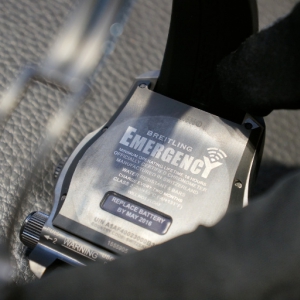 One of Breitling’s icons is the Navitimer, a model that has been produced for the past 50 years without interruption. The Navitimer 01 was introduced in 2012 with an in-house B01 movement. Similar to the other Breitling watches, the Navitimer 01 is certified COSC.

A chronometer is a high-precision watch capable of displaying the seconds and housing a movement that has been tested over several days, in different positions and at different temperatures, by an official neutral body (COSC- Contrôle Officiel Suisse des Chronomètres, the Official Swiss Chronometer Testing Institute). – Source: COSC

In addition to the Navitimer 01 being a classic example of aviator watches, it can be used for several things in expert hands. First of all it is a chorongraph with 1/4 second, 30 minutes, 12 hours. Secondly, reading the bezel that can be rotated in two directions and the scale displaced in three concentric circles, we can measure average speed, make calculations or even use the watch as a compass.

In the unique 50th anniversary Les Ambassadeurs collection the Navitimer 01 is in a limited series of 15 watches. It has a steel and 18-carat red gold casing and black dial.

As a fan of brown-bronze watches the Navitimer with Panamerican bronze dial, red gold case, and brown strap was one of my favourites. 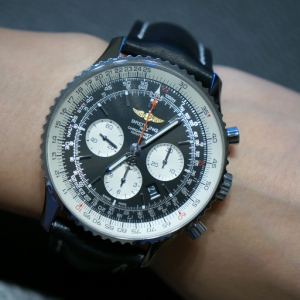 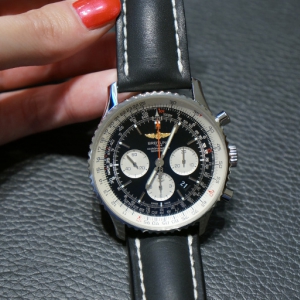 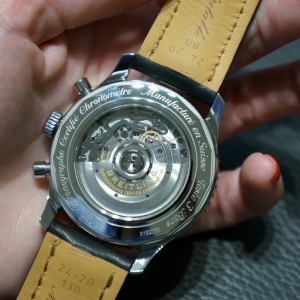 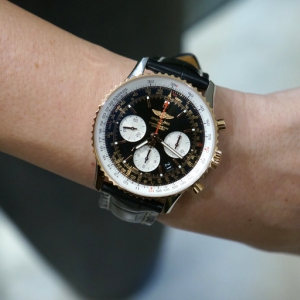 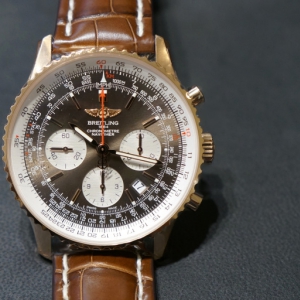 The Jaquet Droz Petite Heure Minute ladies series has several new pieces with unique coloured and structured gemstone or mother-of-pearl dial. The aventurine dial version evokes the night sky, and this mood is further emphasised by the diamonds around the bezel. The Petite Heure Minute houses a self-winding mechanical movement, with power reserve of 68 hours. 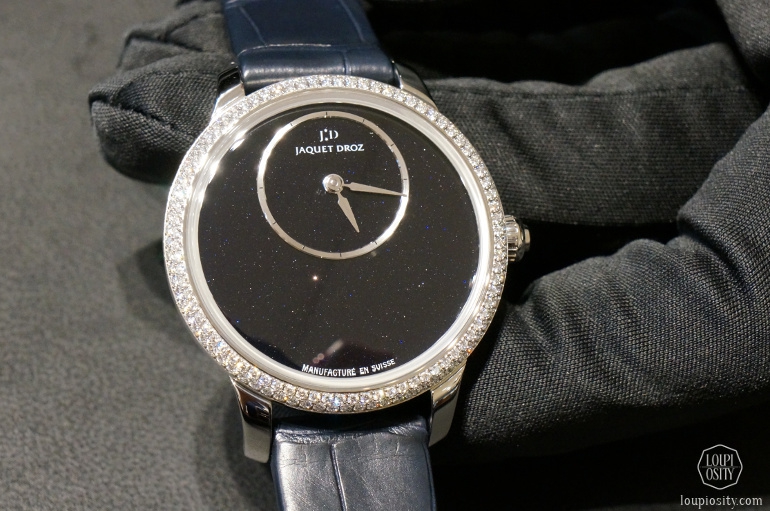 The Ulysse Nardin Classico Automatic is similarly refined – yet to me slightly unusual for Ulysse Nardin. The 888 piece limited edition watch has an 18K 5N red case that nicely frames the white enamel dial and fine Arabic numerals. 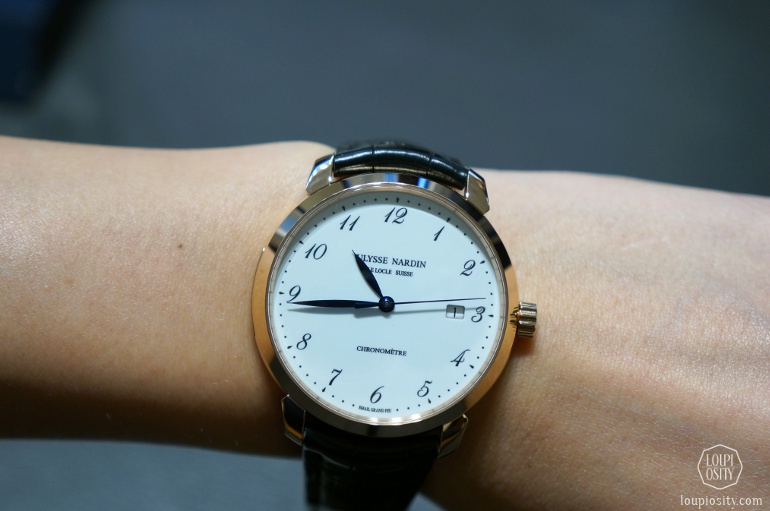 Just as Breitling is associated with flight, Ulysse Nardin is associated with sailing. In the 19th century the company was famous for its marine chronometers. The Marine Chronometer Manufacture has an in-house movement and a patented DIAMonSIL escapement. (DIAMonSIL is a special alloy of silicium and synthetic diamond. The Calibre118 was produced in collaboration between Ulysse Nardin and Sigatec.)

The case is titanium and stainless steel, the simple, but beautiful dial is handcrafted enamel, produced by Donzé Cadrans. (In September 2011 Ulysse Nardin announced that it had acquired Donzé Cadrans, the specialist luxury watch-dial enameller. It means that the brand has gained additional cloisonné and grand-feu enamel expertise.) You don’t need much else to go with your watch other than a pair of navy blue boat-shoes… 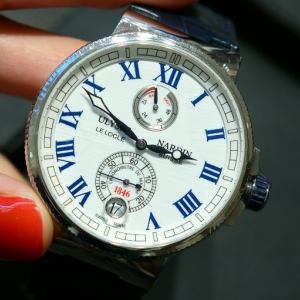 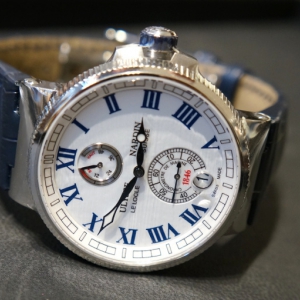 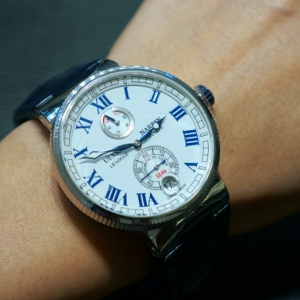 Speaking of dials one of the other Ulysse Nardin models is also a true masterpiece: the 250 piece limited edition platinum Ulysse Nardin Perpetual Manufacture whose finely engraved silver dial evokes the waves of the sea. You can also discover a little infinity symbol on the dial, which is visible on other limited-edition pieces. The calendar display has windows for the big date, day of the week, month and a year indicator. The watch offers a second time zone function. The GMT indicates the current or a second time zone, with its red arrow tip. Its movement is in-house developed and manufactured and the watch introduced a really consumer-friendly perpetual calendar, since it allows the time zones and date to be adjusted both forward and backward. (The mechanism was created by Ludwig Oechslin, whom we met in Dubai).

As I learned a lot of other perpetual calendar watches need repair when a mistake in date adjustment is made – which happens pretty easily. 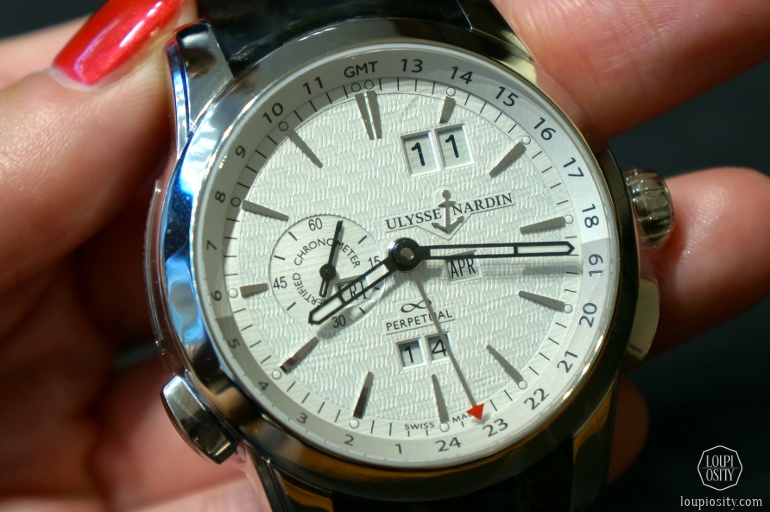 For a long time Panerai produced timepieces for the Italian Navy, but has since become a cult brand. The shapes of the watches, the “sandwich-dial” (comprised of two superimposed plates with the luminous material in between, visible through holes corresponding to the hour markers), a device protecting the crown (Panerai’s trademark) or the “left-handed” version all make Panerai pieces easily recognisable.

The stainless steel Luminor Marina 1950 3 Days Automatic houses an automatic P.9000 calibre with a power reserve of three days. On the white dial you can find the date window at 3 o’clock and the small seconds dial at 9 o’clock, which is also a characteristic of Panerai watches. The pictured version has Luminova dots at the position of the hours and Luminova hands. The painted dial shows all the numbers, not only for 3, 6, 9 and 12 as in most Panerais. 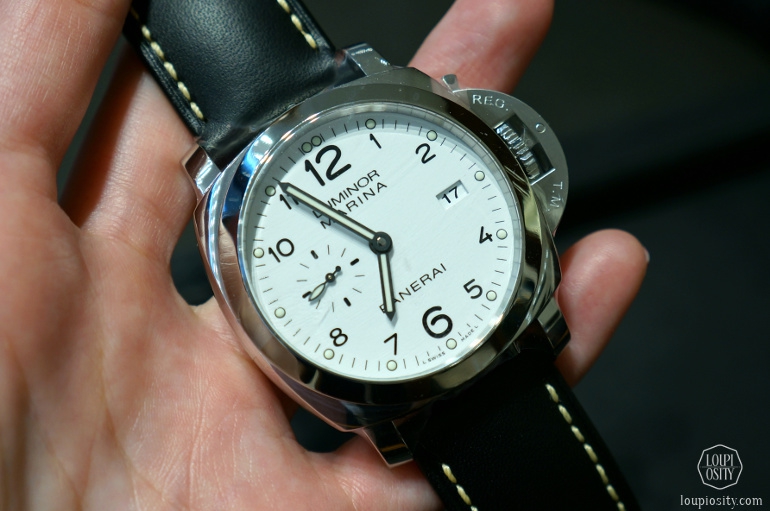 I really like the characteristics of the A. Lange & Söhne Grand Lange 1 Moon Phase model. The brand offers it in 3 versions, platinum, 18K pink gold and 18K yellow gold. The latter two have a warmer appearance, while the platinum watch with black alligator strap looks like being on a snowy field at midnight with a full moon and clear skies. It has a totally different appearance than the previous two.

Again the Saxon manufacture made a beautiful movement, with intricately hand-decorated parts by using a metal known as “German silver” – an alloy of copper and nickel. Behind the openings of the Grand Lange 1 Moon Phase, a fabled world of complex structures of wheels and springs is hidden.

Beyond the hours and minute hand, the main dial has also a moon-phase indicator, which is decorated with more than 300 stars of different sizes – It looks amazing! 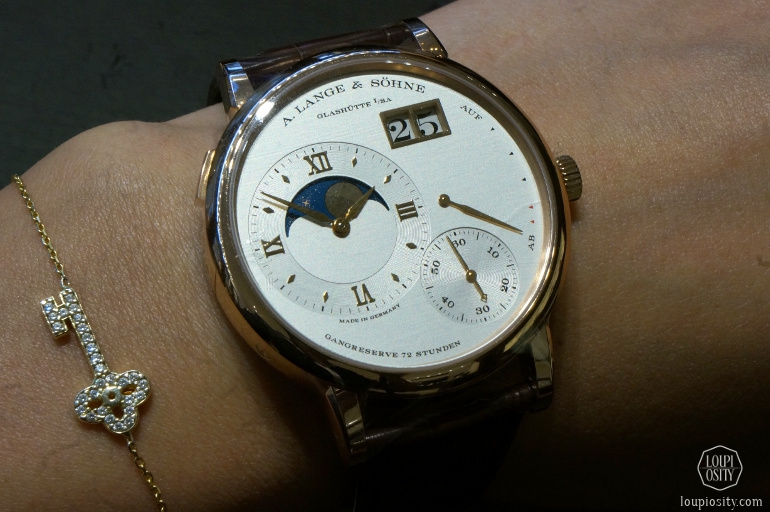 Thank you Michael for your endless patience and great enthusiasm!

Breitling Chronomat for women We had the opportunity to preview the new Breitling Chronomat women watches in the Breitling boutique in Vienna.Breitling Superocean Heritage ’57 Pastel Paradise Capsule… Breitling wants us to finally enjoy a colorful life and summer - this June the brand launched the Superocean Heritage ’57 Pastel Paradise Capsule Collection for women.COVID-19 and the luxury sector - snapshot COVID-19 has brought about quite a situation globally, in no time. In this article we do not intend to provide a thorough analysis, but rather pull together opinions about the outlook of the luxury sector and interesting initiatives from key industry players.