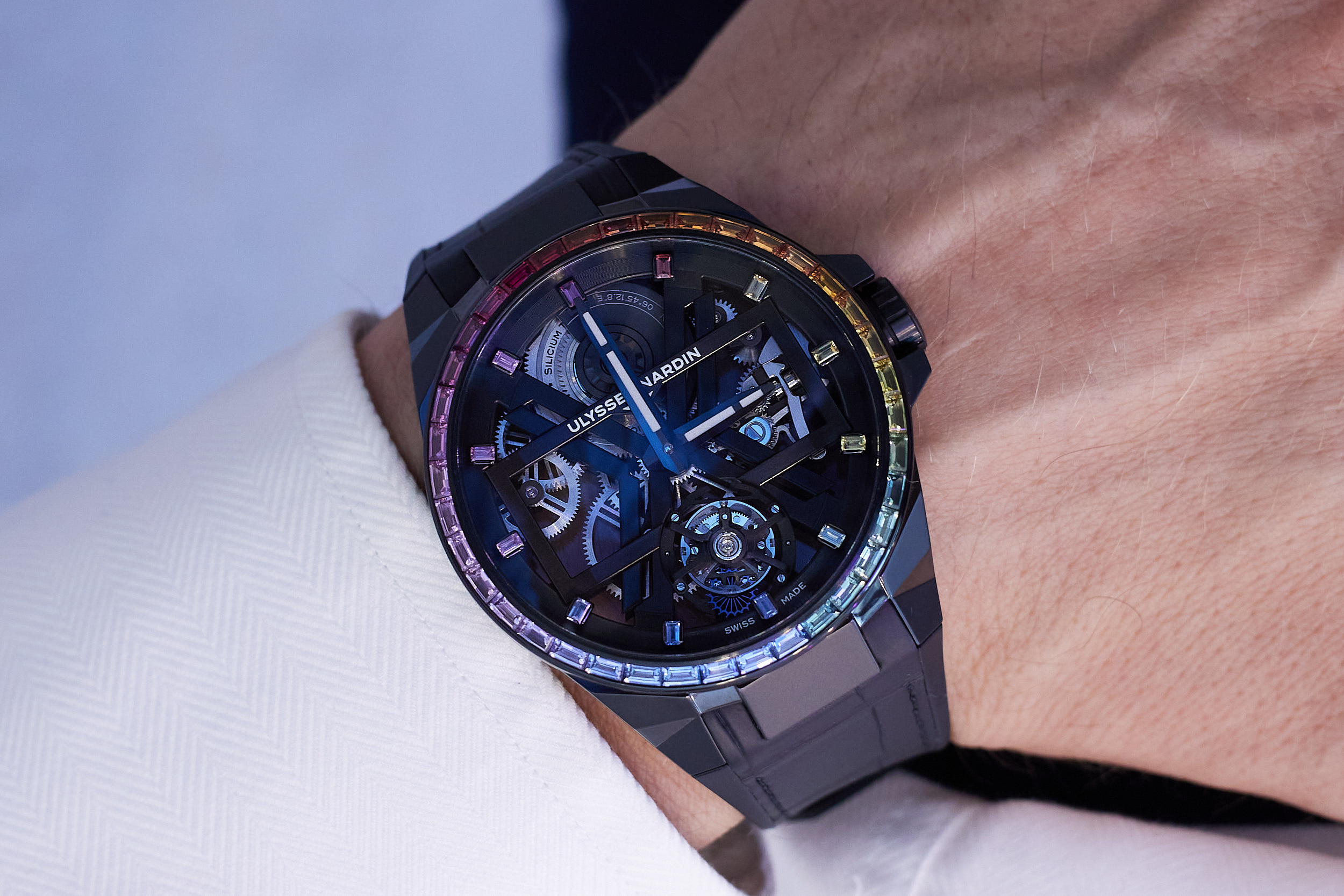 Ulysse Nardin revealed the Rainbow Collection at this year’s Geneva Watch Days in their boutique, with new models: the Blast Tourbillon Rainbow and the Lady Diver Rainbow.

Ulysse Nardin is renowned for marine chronometers and artistic enamel miniatures but also for their innovative fine watchmaking solutions. At the Geneva Watch Days Jean-Christophe Sabatier (Chief Product Officer) gave us a walkthrough of some of the important milestones of the company in their boutique, with a great emphasis on these high-tech applications.

Since the early 2000s, silicium has become the most promising material in watchmaking.It is corrosion-resistant, anti-magnetic, lightweight, and a low-density material – it shows potential in the elimination of lubrication in the watch calibers and can be used for new types of escapements.

Silicium is a synonym of silicon, silicon is a naturally occurring chemical element, whereas silicone is a synthetic substance. Silicon is the 14th element on the periodic table. It’s a metalloid, meaning it has properties of both metals and nonmetals.

Ulysse Nardin is a pioneer in working with these types of components – the company and Mimotec (a leader in the fields of microtechnology and micromechanics, specializing in the creation of micro-components using the ‘LIGA’ process) together founded Sigatec, a manufacture of silicon micro-parts. The outcome of eight years’ of collaborative research and development was the constant Ulysse Anchor escapement, made entirely of silicium in 2014 (they presented a prototype in 2000 for the Dual Direct Escapement).

The Freaks, created by Rolf Schnyder (former owner and CEO) and Ludwig Oechslin (Swiss watchmaker, designer and inventor) in 2001 have represented Ulysse Nardin’s most innovative timepieces since their appearance. Many new design and production methods as well as inventive materials have been brought to market by the Freak collection.

In 2012 the company launched the UN-118, the first member of a family of in-house calibres with an in-house-produced and patented DIAMonSIL escapement together with the in-house-produced oscillator adjustable with four screws and fitted with a silicium hairspring.

As Ulysse Nardin describes the new pieces ‘drew inspiration from its shimmering colours of the silicium escapement’.

The latest Blast timepiece highly advances the above mentioned innovations. Its automatic calibre UN-172 has hours and minutes functions, a micro-rotor in platinum and a silicium flying tourbillon at six o’clock. The balance beats at a frequency of 2.5 Hz (18’000 vibrations per hour – one vibration is a single swing of the balance wheel). The purple silicium escapement wheel peeps out close to the tourbillon cage, while the anchor and balance spring are also executed in this material – making the watch anti-magnetic.

The design is true to the skeleton Blast watches with a ‘shape-within-shape-within-shape’ geometry: an ‘X’, framed in a rectangle, both inside a circle. The edgy black look is hyped up with a rainbow effect around the dial – a total of 50 rubies and sapphire baguette gemstones adorn the bezel and the indexes.

The Blast Tourbillon Rainbow comes in a limited edition of 50 pieces. 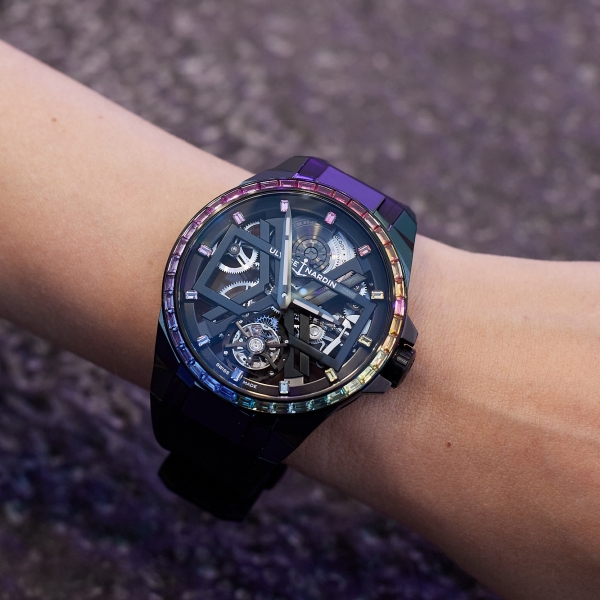 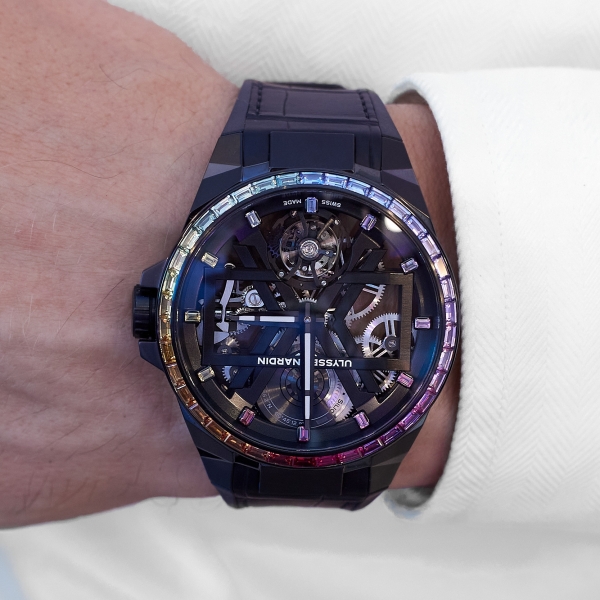 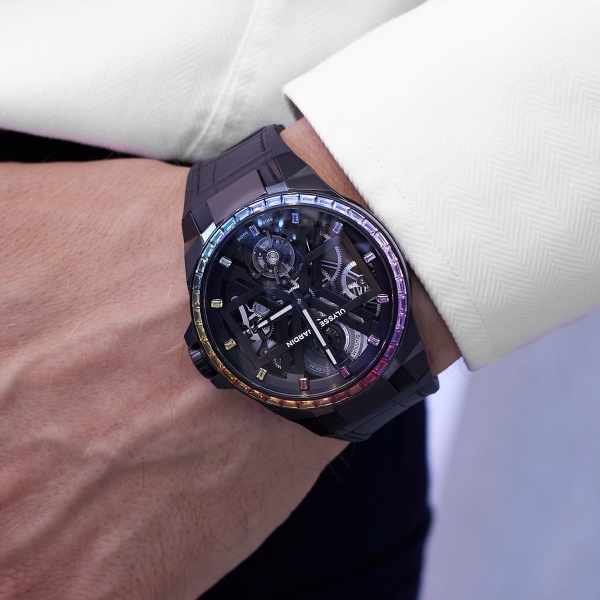 Ulysse Nardin launched very attractive divers’ watches in the last few years. Many of them are limited editions, for example dedicated to the World Ocean Day, The Ocean Race round-the-world yacht race challenge or skeleton dial versions. These are mostly in the 42-44mm size range – now the manufacture released a 39mm Lady Diver in two versions, a black and white Rainbow model, each in limited editions of 300 timepieces.

Both have stainless steel cases, but the black one is coated with black DLC. The bezel is decorated with 40 brilliant-cut stones in the hues of the rainbow – ruby, aquamarine, topaz, tsavorite and sapphire. Eleven diamonds sparkle on the dial, on the indices and Super-Luminova shines on the hands and on the 12 o’clock marker.

These Divers have a modified Sellita-based calibre inside (the UN-816) with hours, minutes, central seconds and date functions. 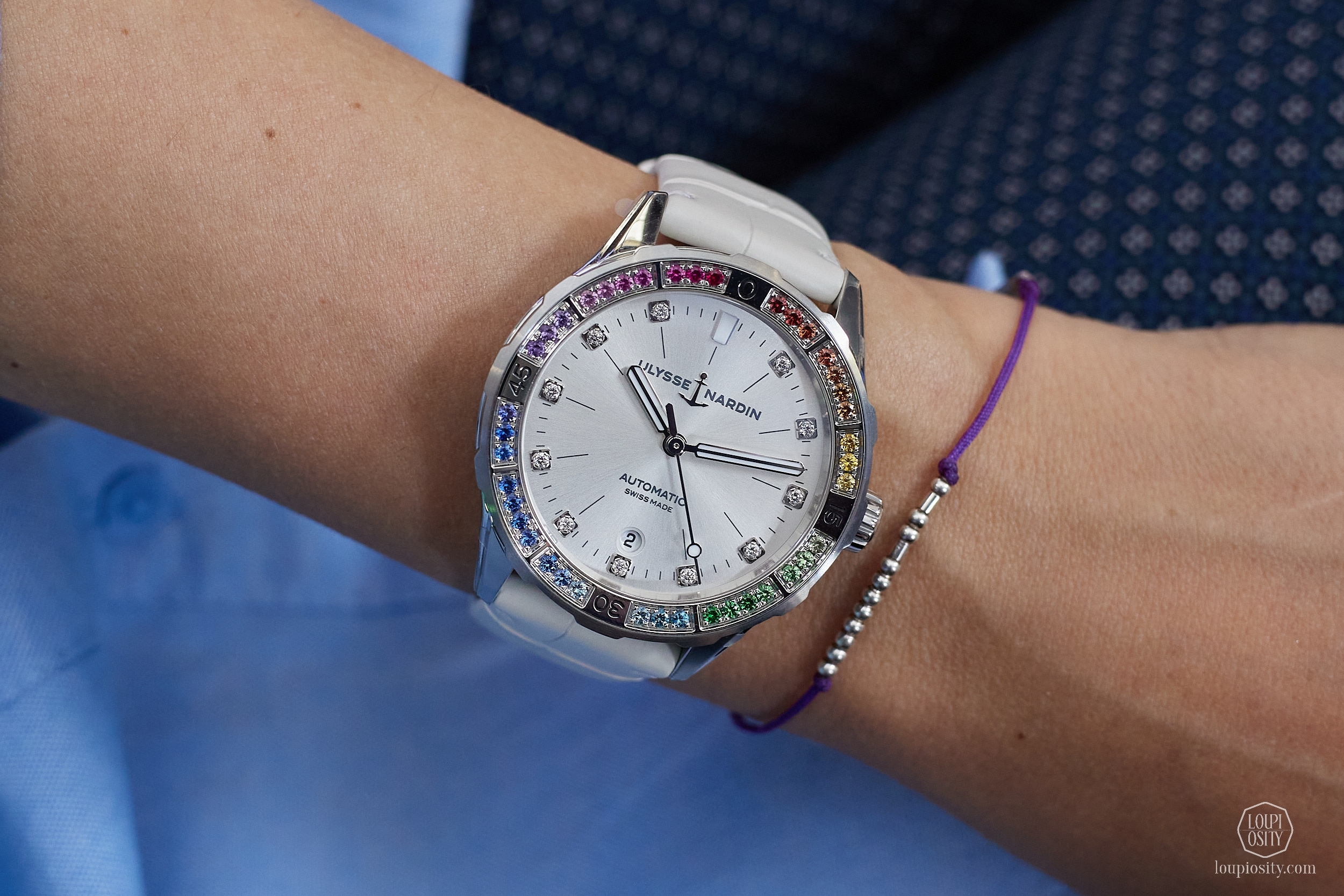 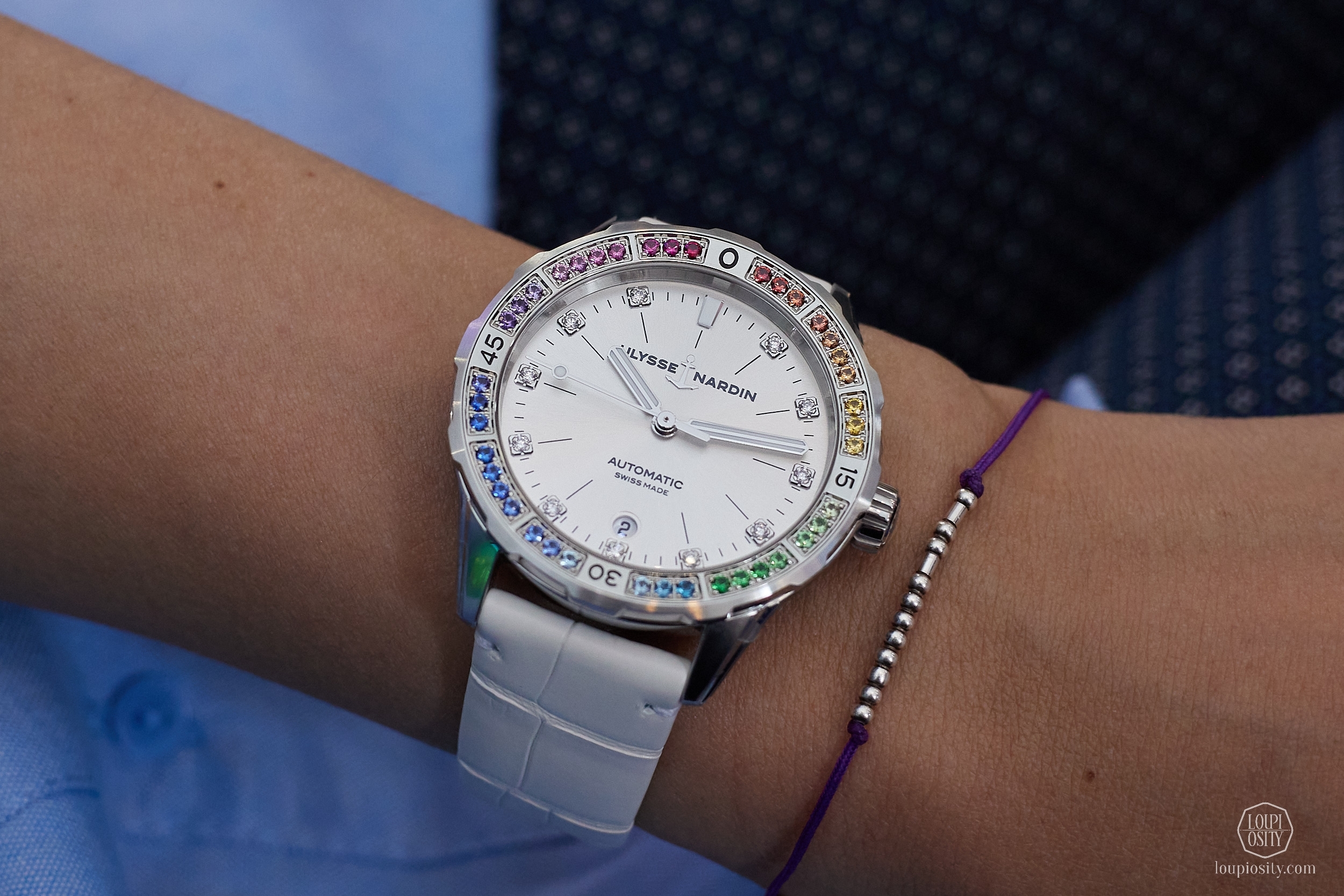 Ulysse Nardin 175 - new museum space Ulysse Nardin has celebrated the 175th anniversary of its foundation this year. On 15 November 2021, the company opened its new showroom and museum in Le Locle. We had a private tour with Massimo Bonfigli, Historian of the brand.Beware of Blast During the Geneva Watch Days, Ulysse Nardin showed us the new and edgy Blast collection at the Geneva flagship store.Ulysse Nardin - Vertical Odyssey At the first show appearance since the management bought out Kering this January, Ulysse Nardin invited us to a Vertical Odyssey at the Watches and Wonders 2022 with three novelties: the Moonstruck (already announced in February), the first double oscillator Freak S, and the Freak X with aventurine.