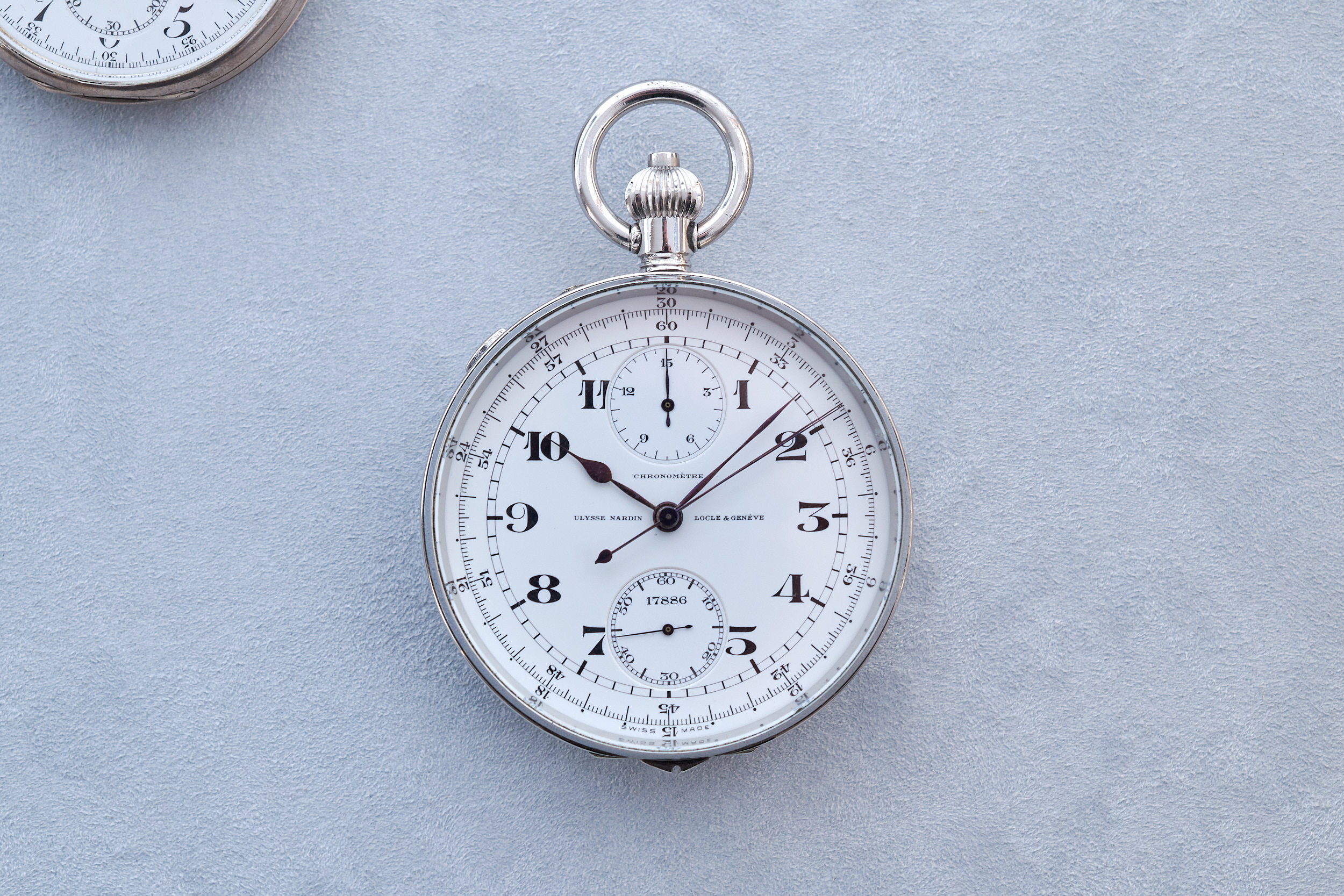 With multiple novelties and several events throughout the year, Ulysse Nardin has celebrated the 175th anniversary of the naming founder’s embarkation on his haute horlogerie venture. On 15 November 2021, the company, renowned for marine chronometers, innovative solutions and artistic enamel miniatures, opened its new showroom and museum in Le Locle. We had a private tour with Massimo Bonfigli, Historian of the brand.

Specialist of marine chronometers for 175 years

Born in 1823 in Le Locle, Ulysse Nardin learnt the foundations of watchmaking from his father Léonard-Frédéric Nardin, before sharpening his skills under the guidance of Daniel JeanRichard-dit-Bressel and Frédéric-William Dubois. Besides being a renowned watchmaker, Dubois was the co-owner of the Château des Monts at that time, which gives home to the Watch Museum of Le Locle today. With his own company, the 23-year old Ulysse Nardin soon turned his attention to high-precision pocket and marine chronometers. At the 1862 International Exhibition in London he won the Prize Medal in the category of ‘complicated watches and pocket chronometers’ and started certifying the accuracy of his marine chronometers with the Neuchâtel Observatory. By the 1870’s he became one of the top suppliers of such equipment for shipping companies. Following his death in 1876, his son, Paul-David, took over the company with a similarly high desire for quality. His timepieces were awarded chronometer certificates in Geneva and in the United States, which paved the way to supplying deck chronometers to the US Navy in 1908 and other Navies. 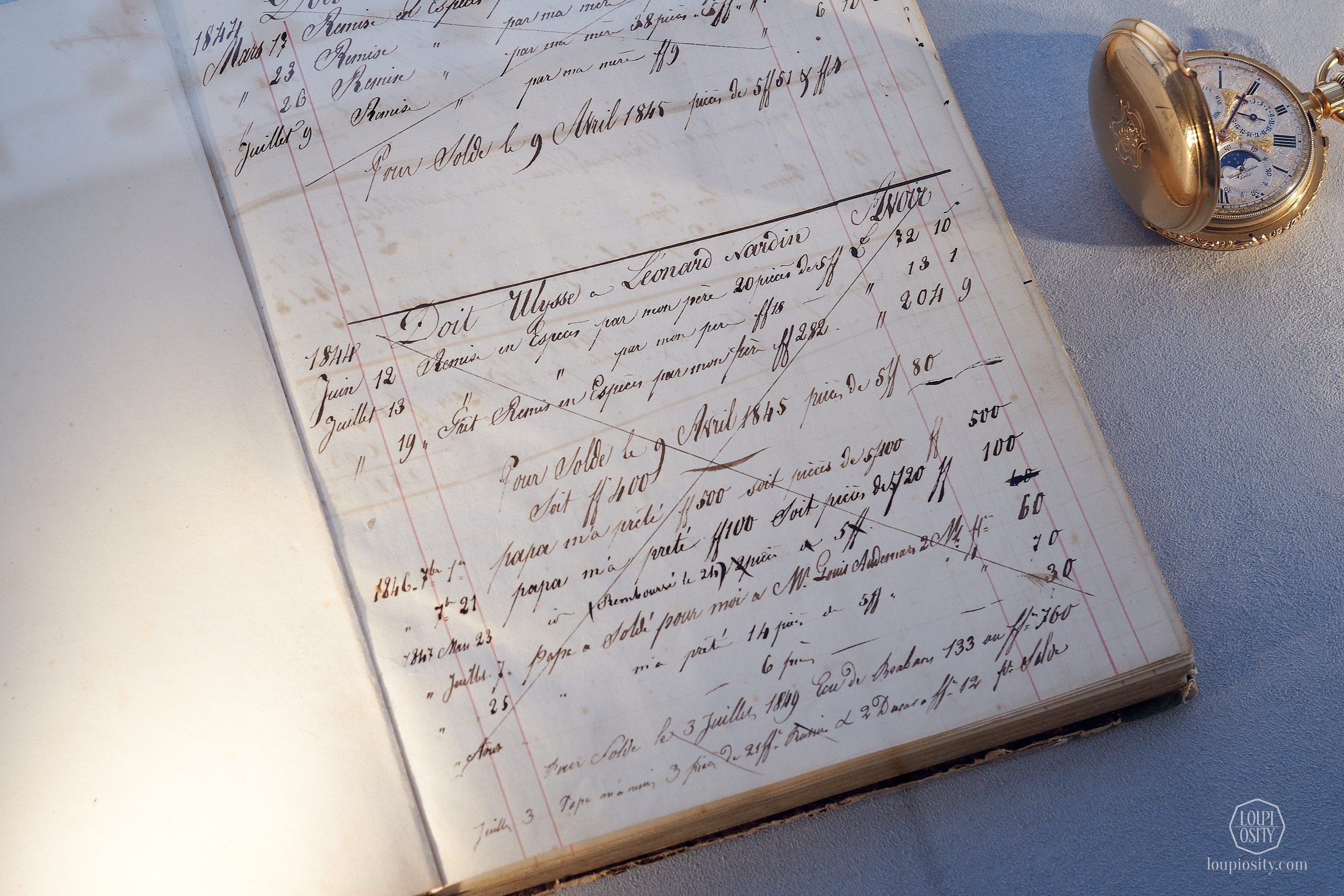 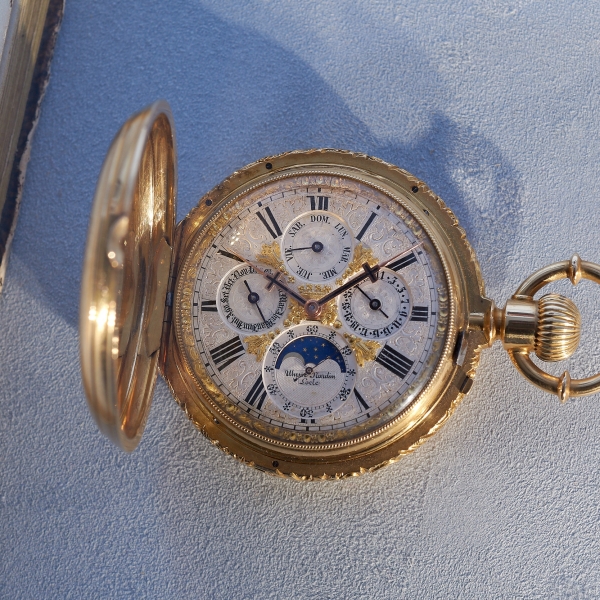 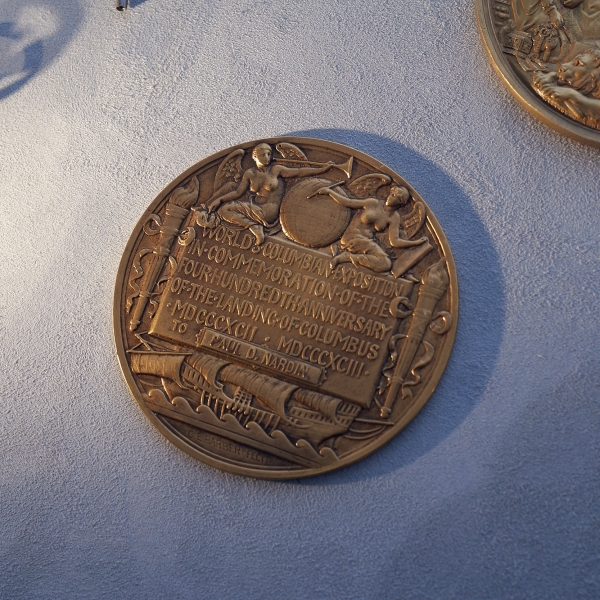 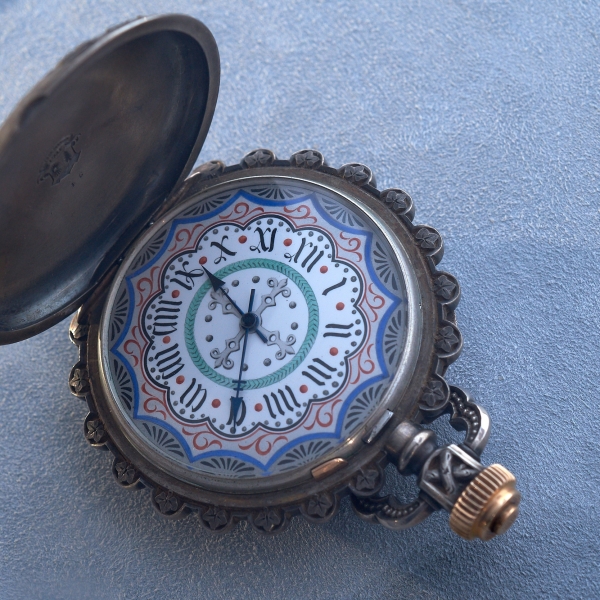 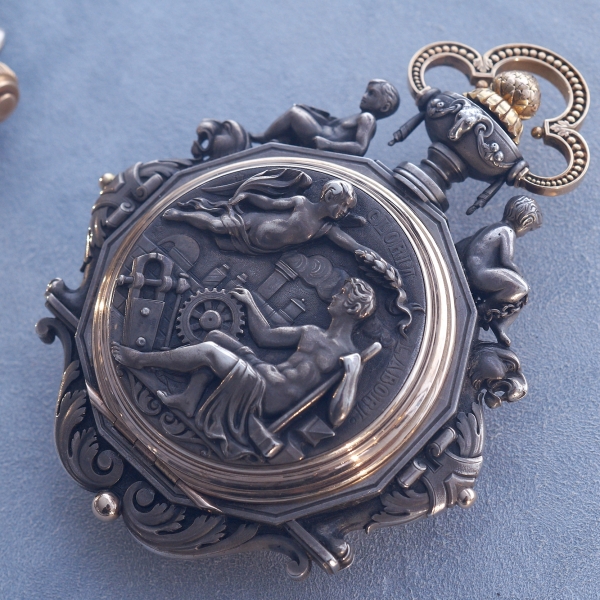 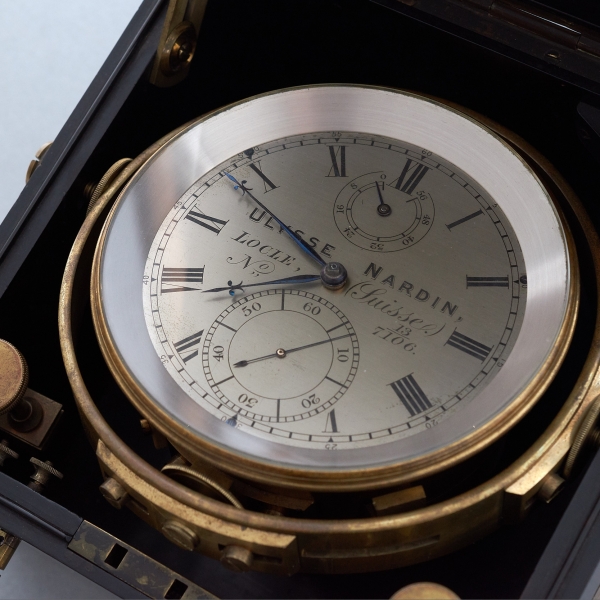 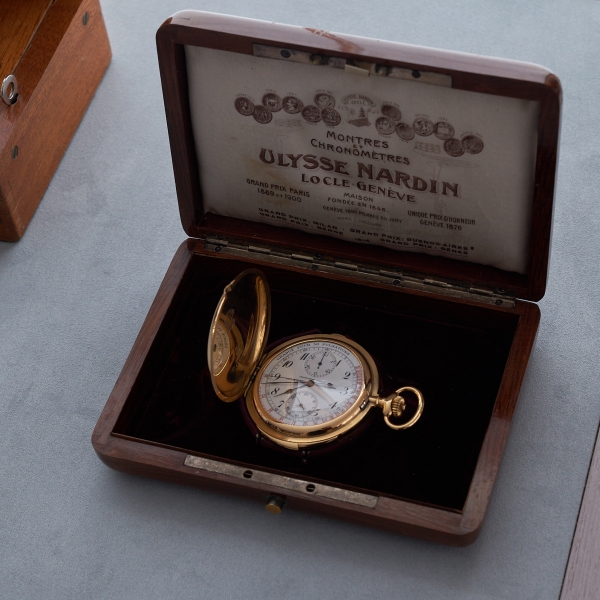 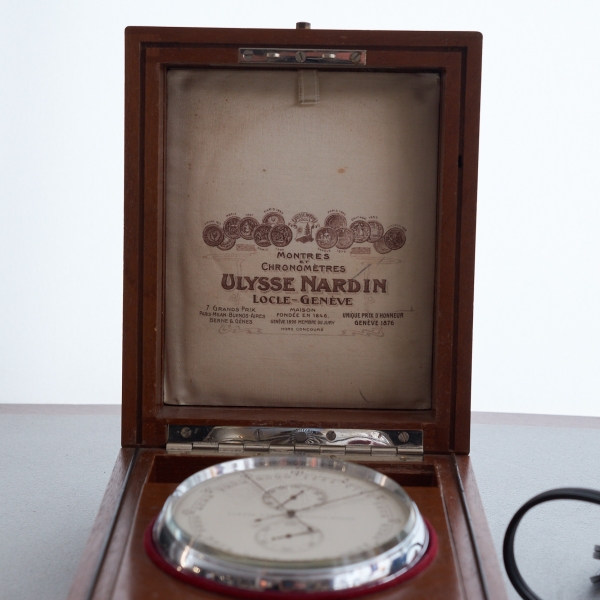 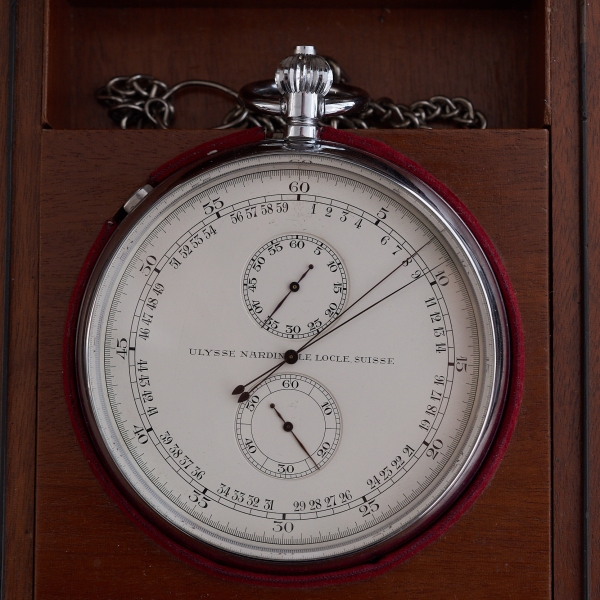 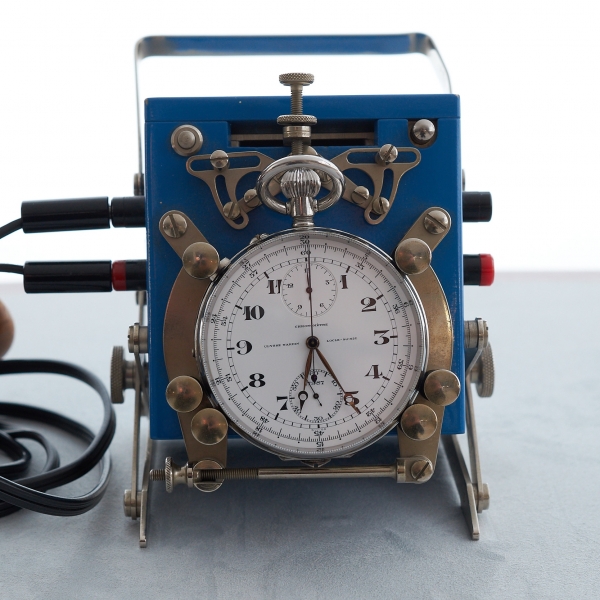 The heyday of marine chronometers was ensued by a period of path finding. The blow of grace was the quartz crisis of the 70’s and 80’s, which led the company to bankruptcy. It was acquired by a group in 1983 under the leadership of businessman Rolf W. Schnyder. His acumen together with the skills of master watchmaker Ludwig Oechslin resulted in a great come-back. They issued high-complications, such as the Trilogy of Time series between 1985-1992 and the Perpetual Ludwig perpetual calendar, which was one of the highlights of the 150th anniversary in 1996. The other was the launch of the Marine Chronometer 1846 collection – the interpretation of Ulysse Nardin’s specialty that established the fame of the house in the 19th century as a contemporary wristwatch. In the past 25 years it has seen many editions. In 2001, the couple gave the Freak carousel to the world, which has represented the epitome of Ulysse Nardin’s watchmaking innovation with unique design and material solutions. The company has also been known for delicate enamel dials created by various techniques by the manufacture Donzé Cadrans, which Ulysse Nardin purchased in 2012. The same year they launched the UN-118, the first member of a family of in-house calibres with an in-house-produced and patented DIAMonSIL escapement together with the in-house-produced oscillator adjustable with four screws and fitted with a silicium hairspring.

Rolf W. Schnyder passed away in 2011 and after a short period of his wife Chai Schnyder leading the company, Kering Group acquired it in 2014. 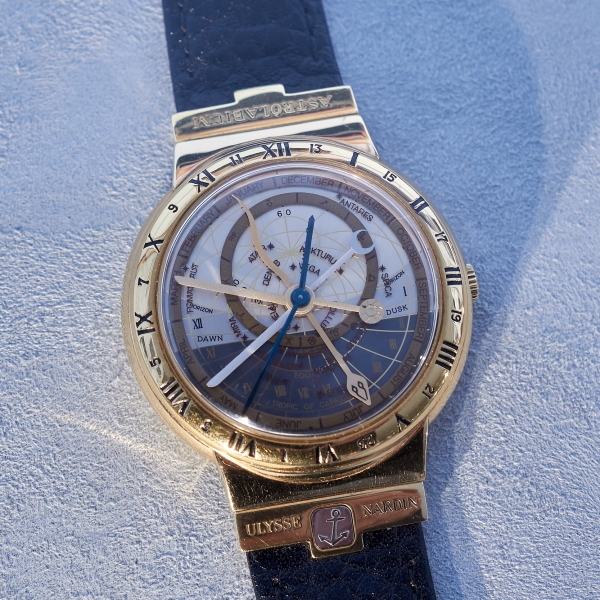 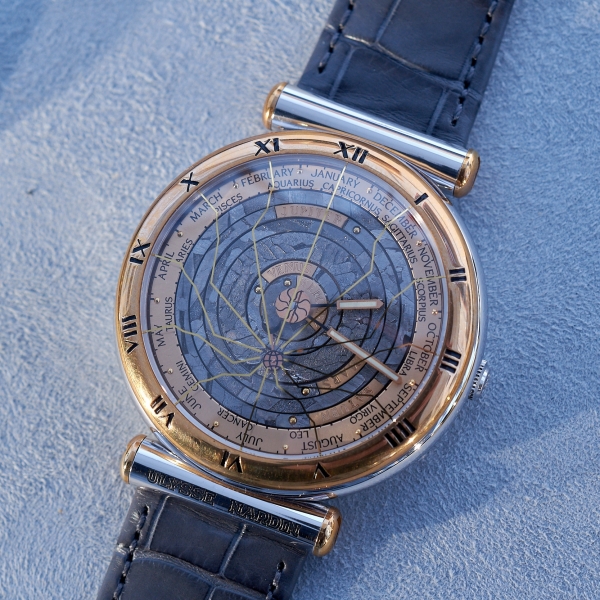 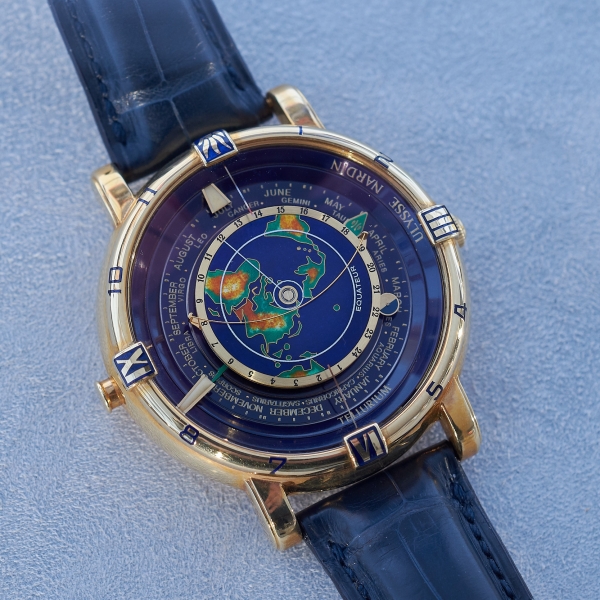 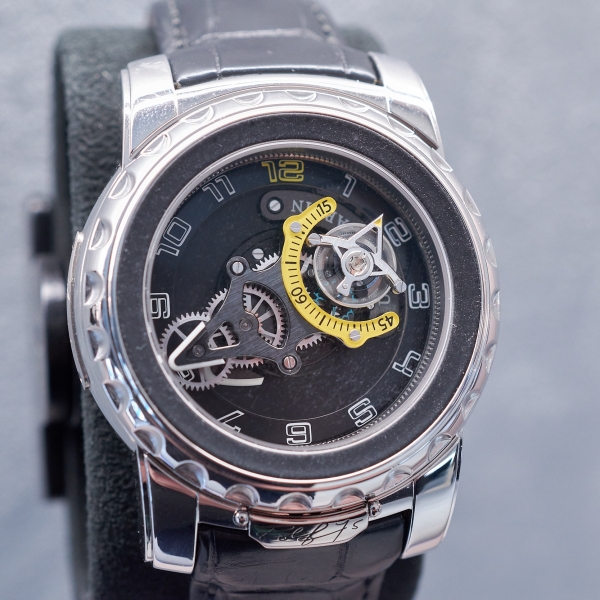 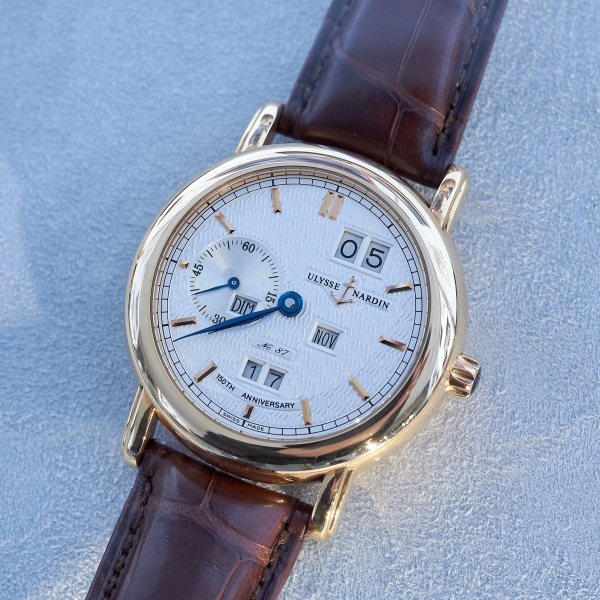 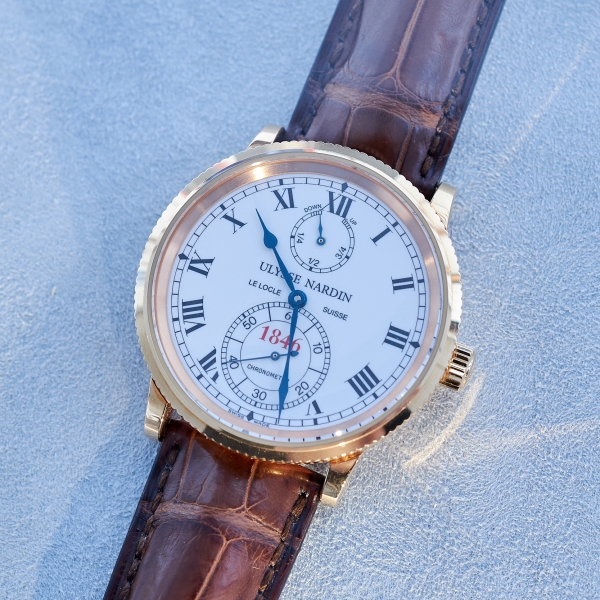 For the 175th anniversary, the manufacture issued seven limited editions.

The two highlights are the enamel versions. Both are created by the Donzé Cadrans workshop with the Grand Feu technique. The blue dial version has contrasting steel case and dial accents. The COSC certified automatic UN-118 beats within at 4 Hz for 60 hours when fully wound. The power reserve is shown in the top sub-dial, while seconds with a small date aperture in the bottom. The black enamel version uses the area of the lower sub-dial to showcase the running of its beautiful flying tourbillon with its constant escapement. The deep black enamel of the Marine Torpilleur Tourbillon Grand Feu is set in contrast with a warm 5N rose gold case and hands. The 2.5 Hz automatic movement is the UN-128 with the same going reserve. 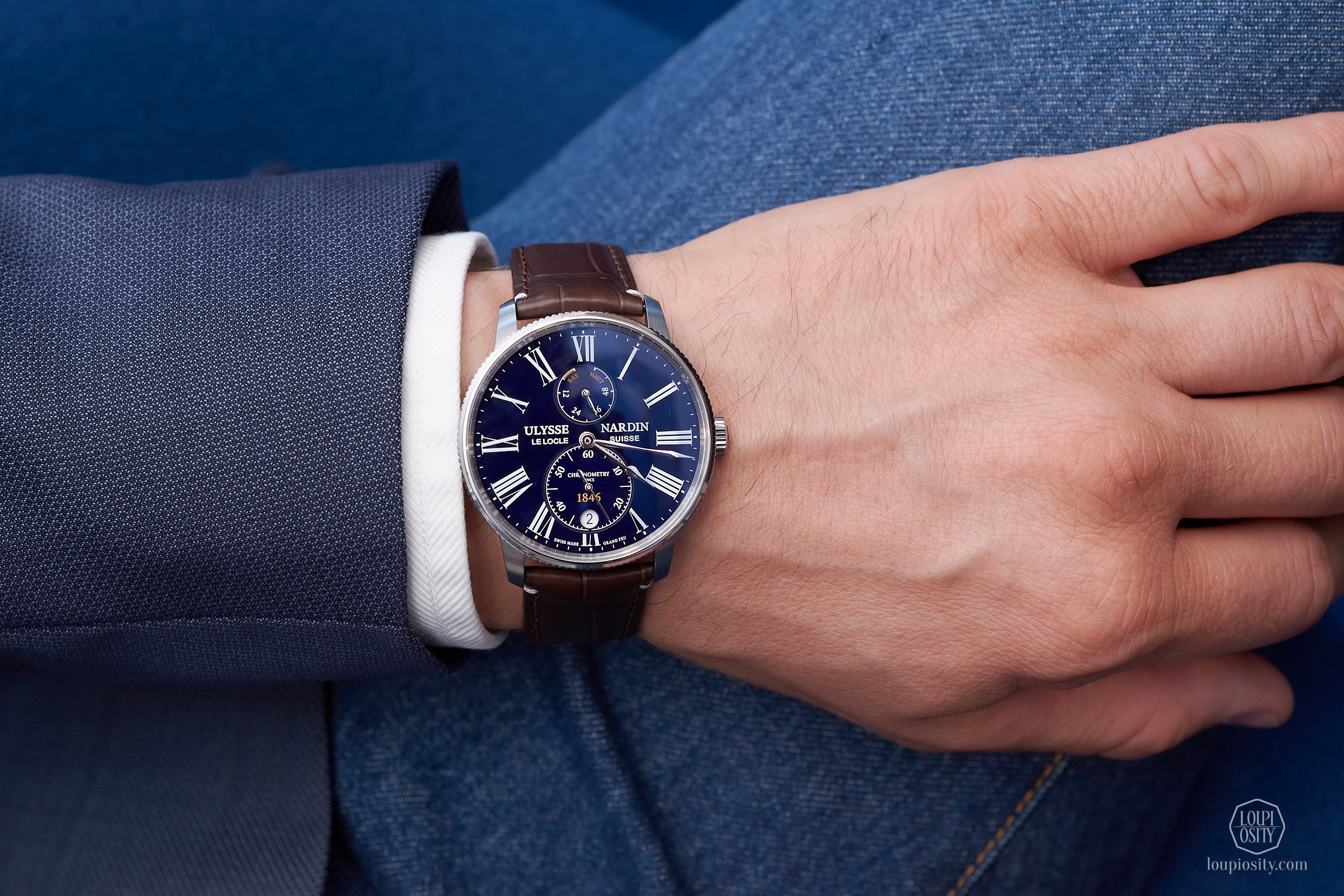 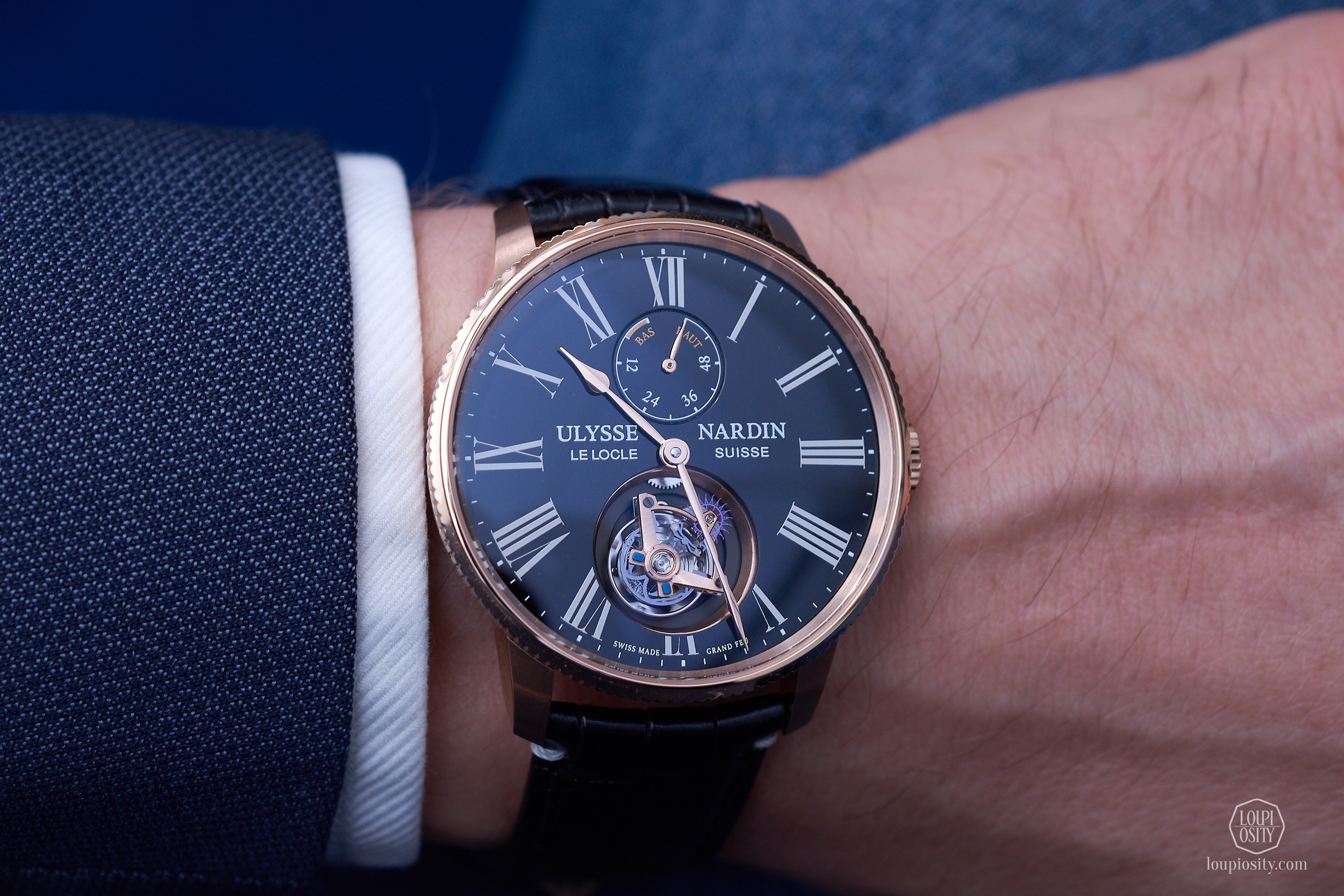 The calibre UN-118 hides in another novelty too, the Marine Torpilleur Panda. Therefore, functions and even the dial setup is the same as for the blue enamel model, except that this has a varnished white-blue panda dial. Similarly, the Panda is encased in a polished and satin finished steel. Just like in all non-tourbillon anniversary models, ‘Chronometry since 1846’ signature appears at 6 o’clock.

There is a chronograph model in two colour options: blue mat PVD and white varnished. Equipped by the manufacture UN-153 movement, it presents the sub-dials horizontally. The one at 3 o’clock is for the chronograph counter and the other at 9 o’clock is for the months of the annual calendar and the seconds. The date is situated at 6 o’clock and the power reserve is sufficient for 52 hours. This is the largest anniversary model with the 44mm diameter and 13.66 thickness of the steel case.

The last Marine Torpilleur anniversary model is the Moonphase. It is built on the UN-119 calibre, a derivative of the UN-118. It comes in two versions, a blue sun-brushed PVD dial and a white varnished dial. The dial layout is similar to the enamel and Panda models, but here the moon plays hide and seek in the seconds sub-dial.

The enamel dial anniversary models are limited to 175 pieces each, while the rest are available in 300 units. 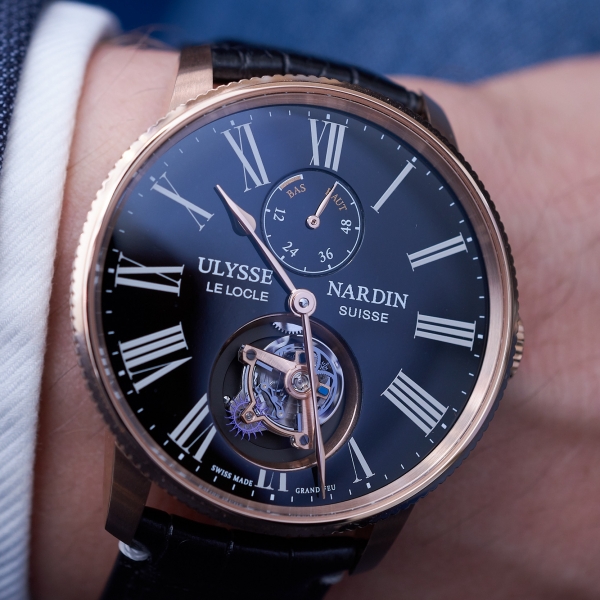 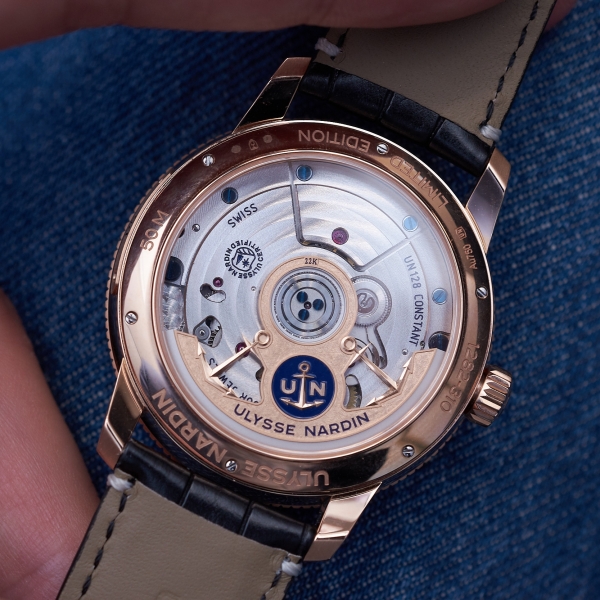 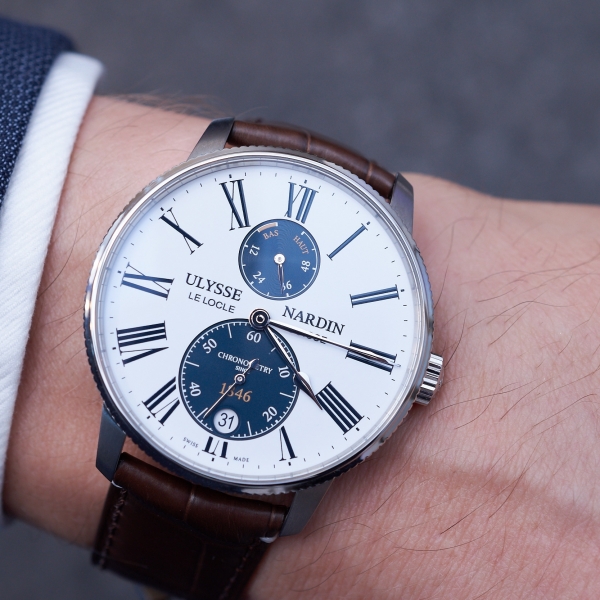 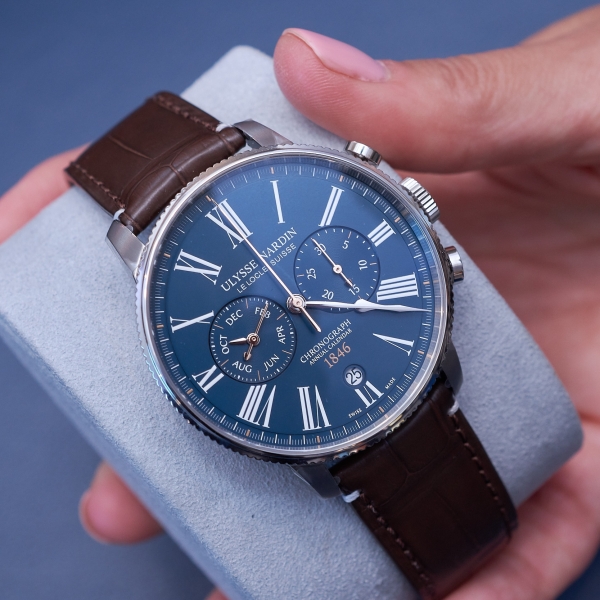 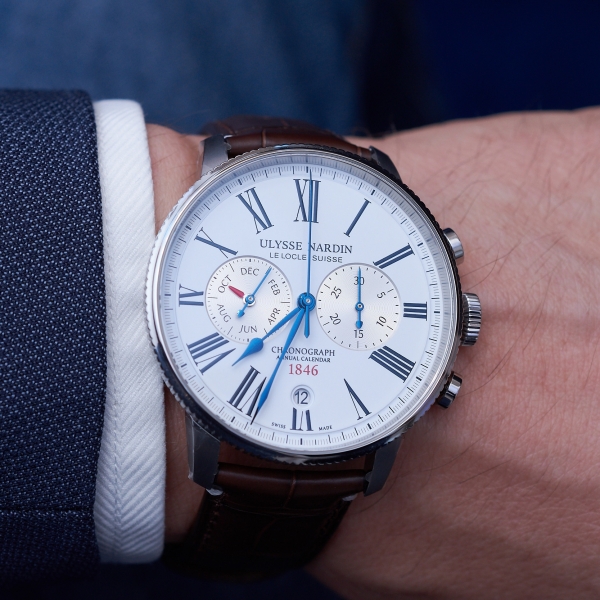 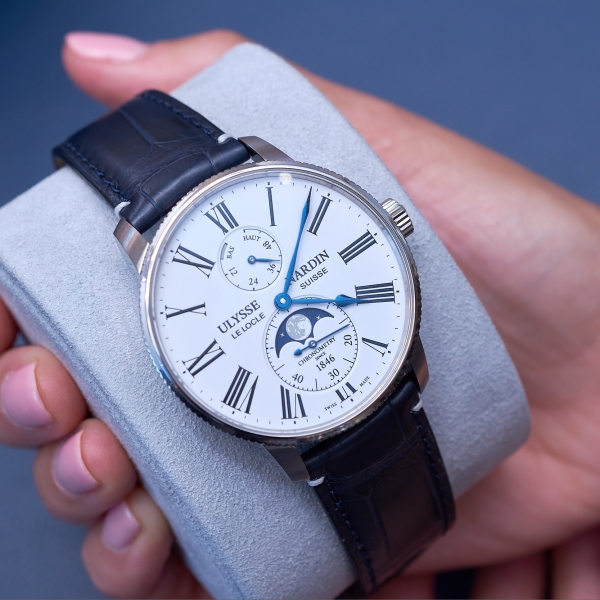 Ulysse Nardin - Vertical Odyssey At the first show appearance since the management bought out Kering this January, Ulysse Nardin invited us to a Vertical Odyssey at the Watches and Wonders 2022 with three novelties: the Moonstruck (already announced in February), the first double oscillator Freak S, and the Freak X with aventurine.Beware of Blast During the Geneva Watch Days, Ulysse Nardin showed us the new and edgy Blast collection at the Geneva flagship store.Girard-Perregaux: changing strategy We met Patrick Pruniaux CEO of Kering’s watch brands Girard-Perregaux and Ulysse Nardin in La Chaux-de-Fonds to hear about the new strategy of GP.