“I say in speeches that a plausible mission of artists is to make people appreciate being alive at least a little bit. I am then asked if I know of any artists who pulled that off.
I reply, ‘The Beatles did'”

I couldn’t agree more with Kurt Vonnegut, although my list is somewhat longer. Watchmakers and craftspeople make it too, for instance, who create objects of art that blur the lines between reality and imagination. Being the love-children of creativity and the desire to surprise, these human works take me to an exciting world of non-stop discovery two stories above the everyday. This domain opens to me whenever I meet Greubel Forsey. Last week in Budapest, where we had a cheerful conversation and presentation with Stephen Forsey at their new partner, the Marquise boutique. Bassam Abouwatfa, the CEO Marquise, have had a relationship with the brand for a long time, which recently turned into an official partnership to service the region.

The Renaissance of fine-watchmaking happens today not particularly due to necessity, but rather the demand for fine luxurious items, and of course a strong Swiss industrial and country marketing. The promise of luxury is rather compelling to many and therefore a number of watch brands have lowered the entry point with more affordable but still mechanical models. I think this could be a good thing, as the wider appreciation and desire for mechanical watches can ensure long-term sustainability and can pull a growth in sales in the high-end segment, too.

Greubel Forsey produces serious collector pieces only with capacity (and willingness) for roughly a hundred timepieces a year. Since their inception in 2004 they produced a total of under 1000 pieces, but they all stand out from the crowd from both an aesthetical and technical aspect. Their buyers are collectors from all over the planet with exact knowledge about the pieces. They, who Greubel Forsey probably also made appreciate life more, are the brand’s ambassadors. Owners get together with the founders for closed and exclusive collector dinners every now and then – exactly what happened in Budapest. 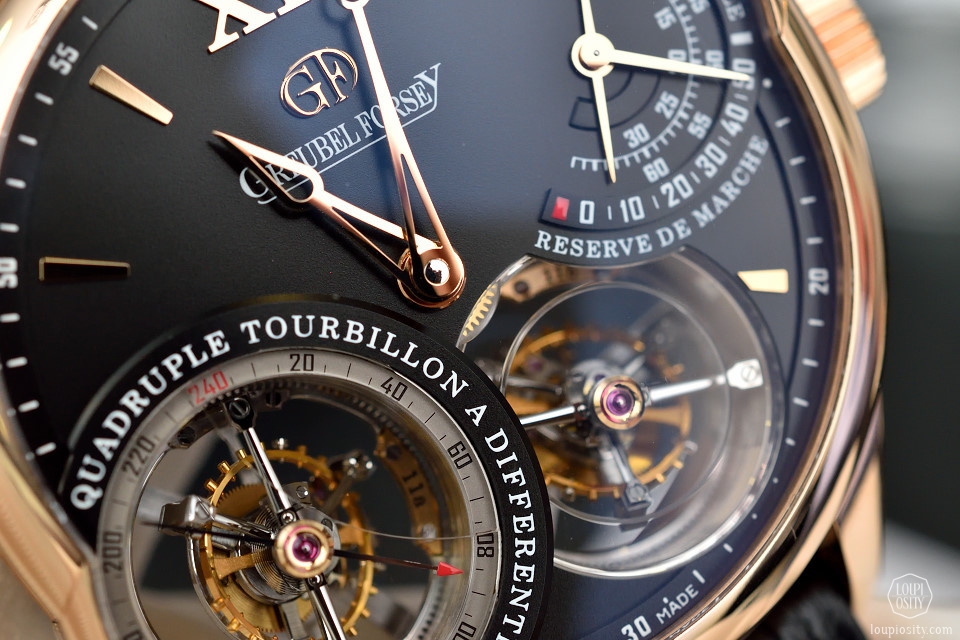 The two founders Robert Greubel and Stephen Forsey have been working together for more than 23 years now. They first met at Renaud et Papi in 1992 and later formed CompliTime – a specialist of highly complicated movements. The company is very active even today and develops movements for various watchmaking firms. It was here that the creation of the Double Tourbillon 30° regulator and the timepiece incorporating it commenced, which was presented at Baselworld in 2004, already under the aegis of Greubel Forsey. How their potential was seen on the market is well shown by the agreement they could bring under roof with Richemont Group within only 2 years of their debut. The pact gave a 20% minority share to Richemont (very rarely does Richemont accept a minority position), keeping independence for Greubel Forsey, while providing a fertile soil for innovation by increased stability and resources – the dream of all independent watchmakers, isn’t it? Although many had doubts, this did not kill individualism and creativity and looking back from almost 10 years on, I guess you may say it works.

Innovation has been somehow encoded in the duo. “Closing to the new Millennium in 1999, Robert and I had spoken many times about whether everything related to measuring time has already been invented or not. We had many ideas, so we started Greubel Forsey to realize them.”– explains Stephen Forsey.

Their two decades of collaboration has been more than many marriages, which raises the obvious question how can the inevitable collision of different opinions bring the company forward and not in the opposite direction? “We split the responsibilities right at the start. Robert takes design, I work on the technology – this eliminates many problems. Of course, when creating watches it all fuses into a single timepiece, therefore colliding opinions are part of the creative process. But if we discuss something and our views are still different, then once I leave it to him, and next time he leaves it to me. Due to our common respect that seems to work too.”

If only Meccano models and CAD software could talk! According to stories, the working mockup of their first invention, the 30 degrees inclined Double Toubillon, which rotates the escapement around two axis, was made during one night from Meccano components. It sits in all pieces of their similarly named collection, which in 2011 received 915 points out of 1000 on the International Chronometry Competition of the International Museum of Horology in Le Locle and won the trophy. Increased precision of the mechanism has been the motivation behind most of their developments, no wonder why tourbillons have such an importance for Greubel Forsey.

Two such regulator systems operate in the Quadruple Tourbillon models. They are linked via a spherical differential, which averages the rates of the balance wheels and releases the power of the mainsprings in this common rhythm. 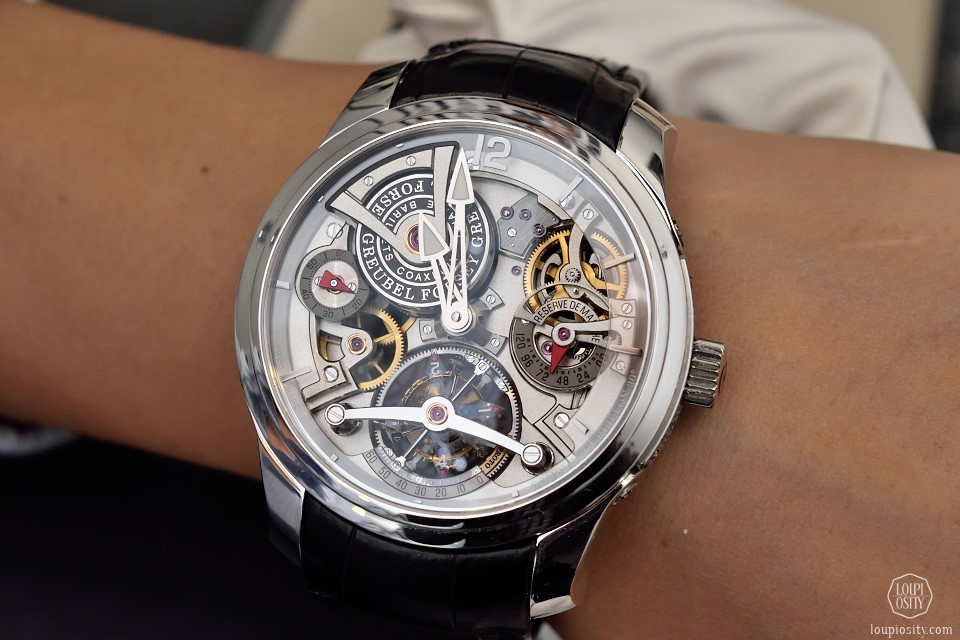 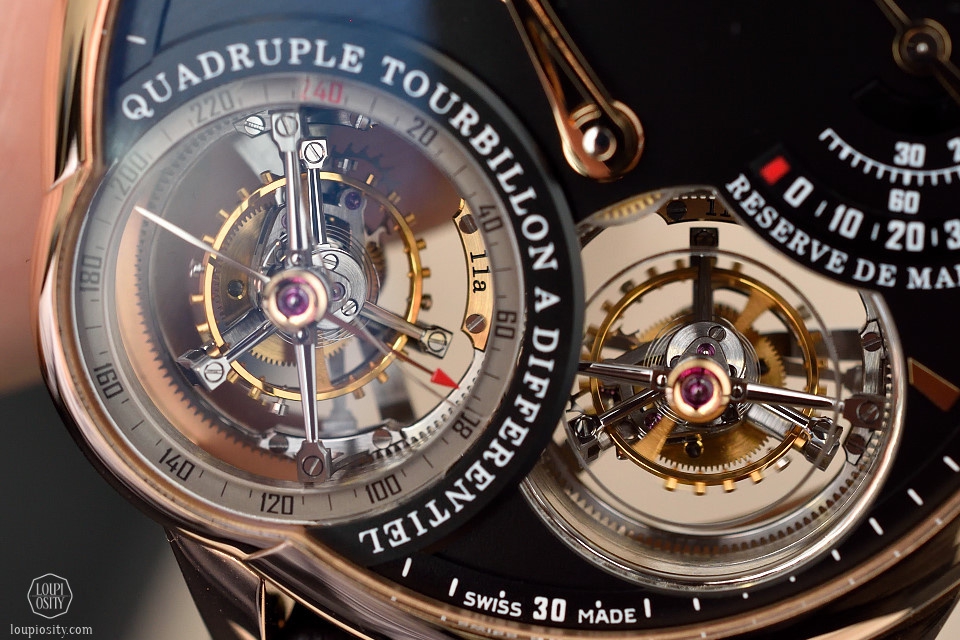 The gents have designed a faster regulating organ, the 24-seconds tourbillon, inclined in 25°. It has been fitted in my favourite models. The Tourbillon 24 Seconds Contemporain looks rather simple compared to other pieces – if you may even use this adjective for a Greubel Forsey model. The dial has two levels and the tourbillon is placed on the lower. The higher half gives space for customization, which beyond the fantastically intense blue oxidized ocean version it may appear paved with baguette cut diamonds, or other times with special decorations, just like at the Les Ambassadeurs 50th anniversary edition.

After tourbillons the brand started to explore other main horological complications and casted the GMT timepiece that incorporates a second time-zone function. And of course, instead of adding it as a subsequent hand or ring, they actually placed a miniature rotating Earth in the structure. As the globe turns, the 24-hour ring in the level of the Equator tells the time at the place of the read.
Quantième Perpétuel à Équation was shown last year at SIHH. The 24-seconds tourbillon has been sentenced to take a discrete supporting role and leave the stage for the exceptionally intuitive perpetual calendar display. The calendar can be simply and quickly adjusted by the crown in any direction. 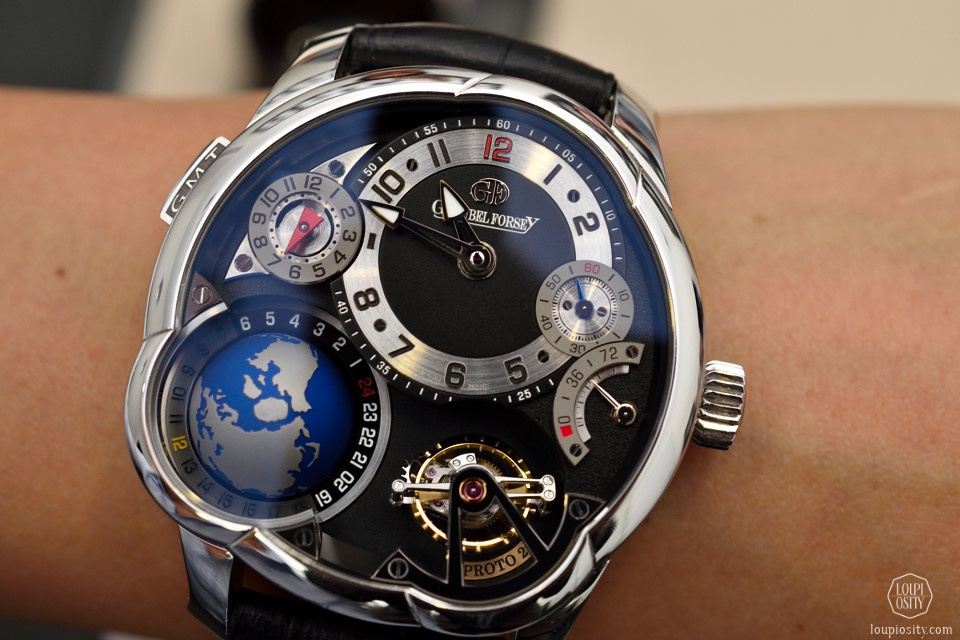 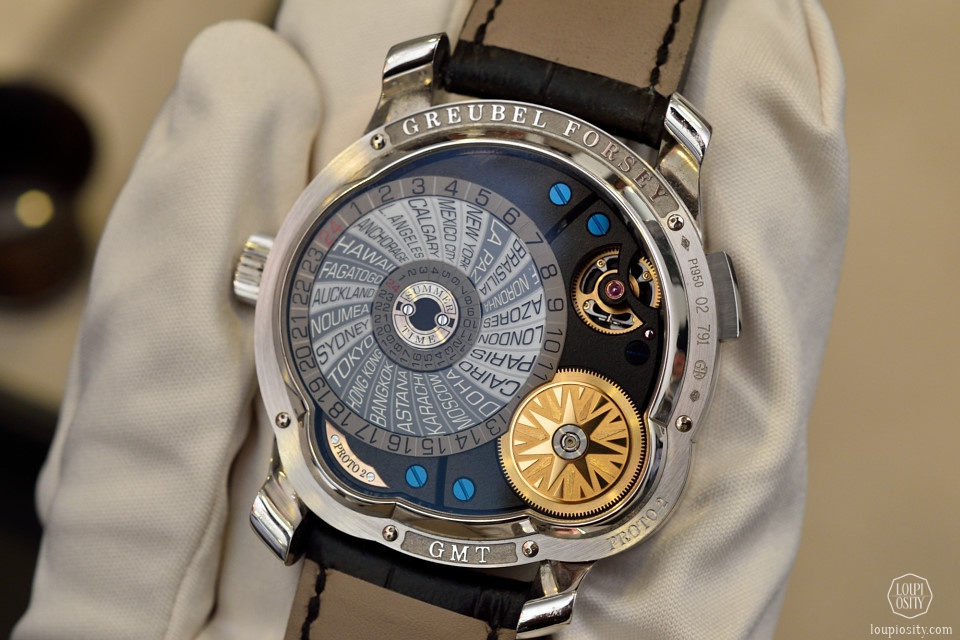 Greubel Forsey watches are extremely technical, but a good balance is maintained with aesthetics at all times. Pieces leaving the La Chaux-de-Fonds workshop bear remarkably similar genes and they are recognizable from a distance. Robert Greubel has a special talent for showing the beauty of asymmetry and emphasizing different components of the movement. Most fronts let an undisturbed view to these, but instead of skeletonizing, they rather build an open-worked 3D surface, which looks like opening a miniature house from the sides. Each model has its own movement designed to deliver the technical feats as well as the visual pleasure with immaculate finishing elevating both.

The company has its own R&D department to experiment with new techniques as well as materials. Decorations, like the oxidized blue surfaces on the GMT’s globe were researched here. On the other hand they have also been testing what composite material could be used for both the balance wheel and the spring to reduce the affect of temperature variations and magnetic fields even further. Triumph is not guaranteed, it takes good ideas, time, patience, a massive amount of resources and a fair bit of luck to come up with the next innovation. For example, synthetized diamond investigated for the balance seems not to be the right material, but led the engineers to others.
And before it is built into pieces, months if not years go into testing the final unit. 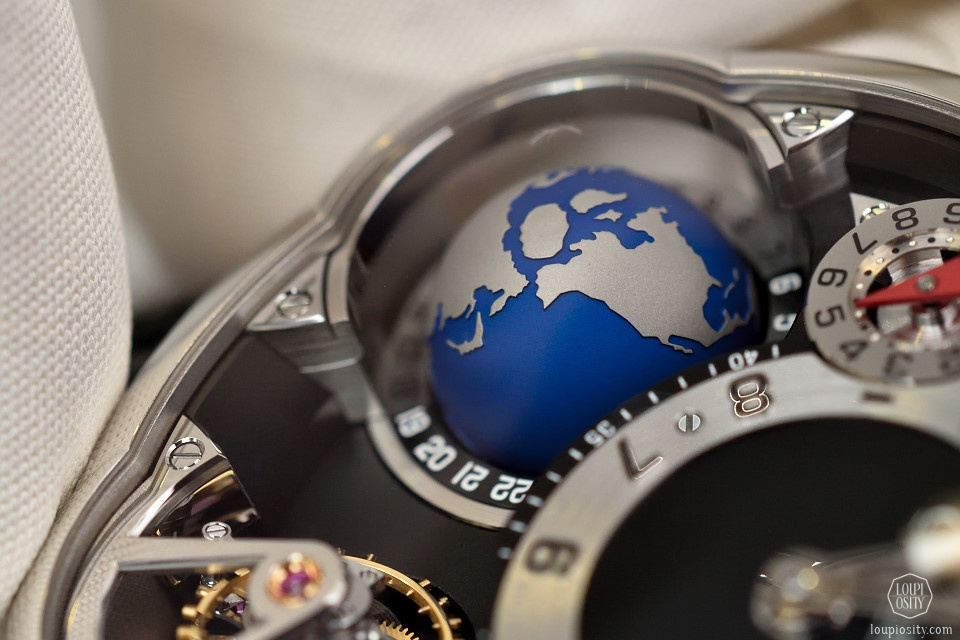 Generation “YZ” kids use the mobile well before they can walk and “being connected” has become rather an axiom. Instead of croissants, we consume megabytes for breakfast and scan a massive amount of data for information quicker and shallower than ever before. “Fast” and “now” are the keywords of today and technology developments not only make life easier, but actually drive how we live.

In the intoxication of progress we tend to forget faster, too – many cultural, linguistic, folklore memories and even craftsmanship techniques have become extinct or close to it with the last storytellers passing away.

That holds true in watchmaking and generally in manufacturing, too. The super-accurate computer controlled machines allow manufacturing at speed, constant high quality and relatively cheap – compared to employing human resources for the same tasks. Additionally, new materials redraw the boundaries of possibilities, but they are processed in entirely new ways and with space technology.
Therefore traditional tools have become museum pieces or interior decorations and there are only a few left who know how to operate them.

“We are really afraid that one day we’ll just stare at these tools and there’ll be no one who could function them. This situation is rather fragile; may anything happen to these people it could mean the total disappearance of centuries old knowledge.” – explains Stephen Forsey why he and Robert Greubel initiated the Le Garde Temps – Naissance d’une Montre project with Philippe Dufour a few years ago. “Our goal was to record the traditional watchmaking techniques by involving someone, who could convey this knowledge to the next generations.”

The “messenger” was chosen carefully based not only on technical skills, but other factors too, such as attitude and commitment. Michel Boulanger, a teacher from the Diderot vocational training college in Paris, was selected eventually and the work commenced in 2009. The team designed a three-hand manually wound wristwatch regulated by a tourbillon and once Michel learned and practiced the usage of the old watchmaking tools he produced the initial piece entirely by hand. The unadorned Montre-école was presented at SIHH 2015.

The route to the new piece has been documented, which is planned to be used in education and will also be made available to everyone interested. 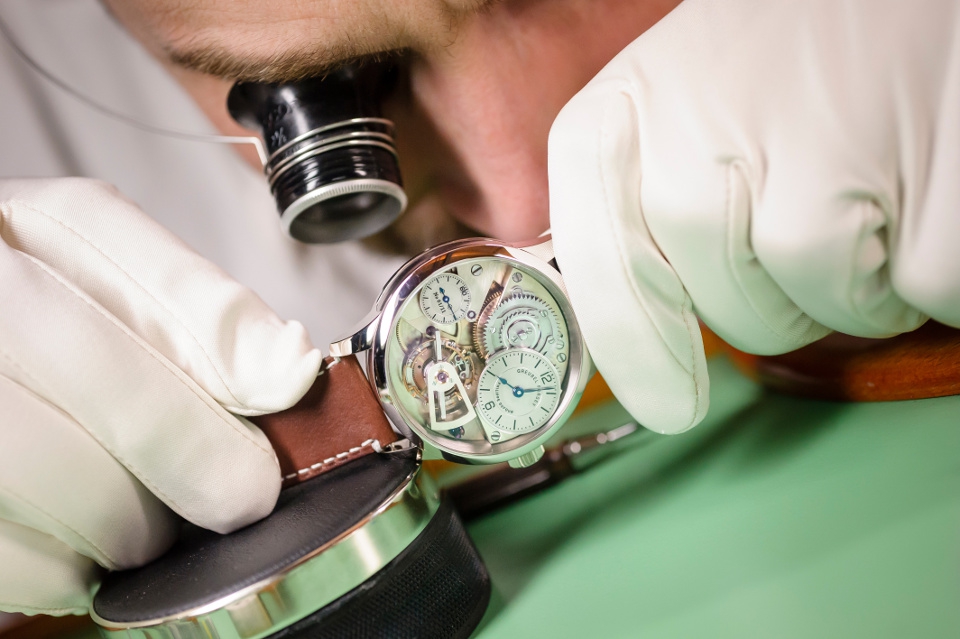 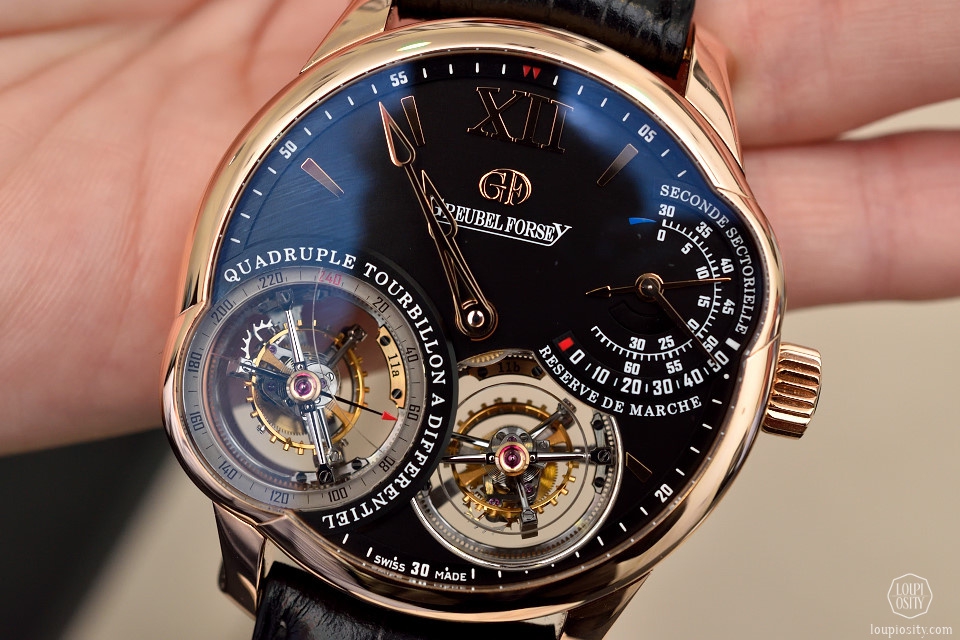 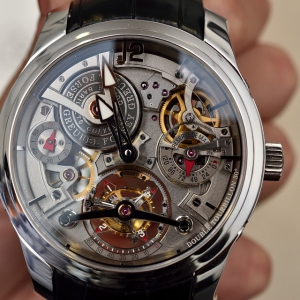 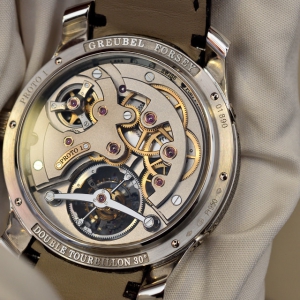 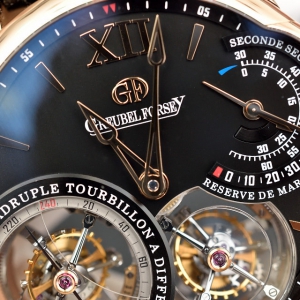 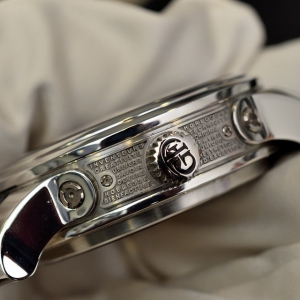 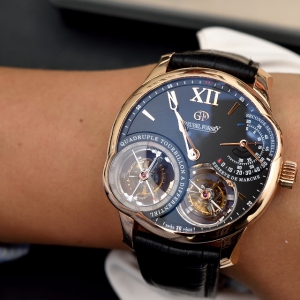 Homo Faber 2022 The motto - ‘Crafting a more human future’ - of Homo Faber reflects the dedication for the beauty of creation, and the amazement of the ever-curious free mind. The Homo Faber opened its gates on the island of San Giorgio Maggiore between 10 April - 1 May, 2022.The OAK Collection exhibition On 19 May, 162 vintage and contemporary museum-quality watches of the OAK Collection embark on a four-stop exhibition world tour from the London Design Museum (19-25 May). We sum up the 11 exhibition chapters and give you updates as we participate in the pre-opening ceremony on 18 May.Summer in Paris To soothe our covid-battered soul, the City of Lights has prepared an abundance of events this summer. From the hundreds of exhibitions, boutique openings and cultural programmes in Paris I selected a few for my long weekend. Check them out if you fancy a recharge in the French capital.