The Génie of Jaquet Droz 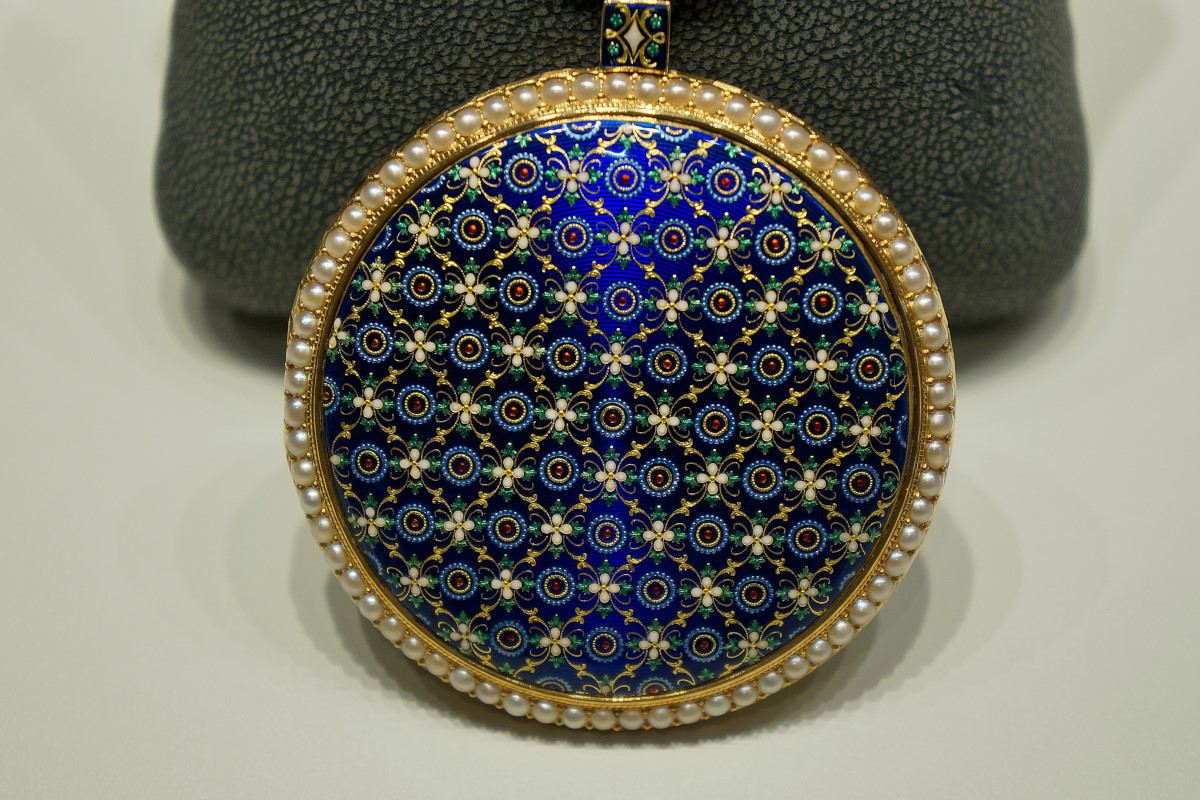 Pierre Jaquet-Droz at the age of 17 opened his first clock-manufacturing workshop. From the late 1760s he was accompanied by his son Henri-Louis and Jean-Frédéric Leschot in his atelier and between 1768 and 1774 they constructed three highly complex automata devices (The Writer with 6000 components, The Musician with 2500 parts and The Draughtsman with 2000 elements), which some consider to be the predecessors of computers. The three automata have brought great recognition to Jaquet Droz and the machines were demonstrated at royal courts from Paris to London, Flanders, Russia and Madrid. The fame and exports of the manufacture even expanded to China. In 1784 Henri-Louis and Jean-Frédéric moved to Geneva and established their clock-making shop marking the heroic age of the manufacture’s history. With the death of Pierre Jaquet-Droz in 1790 and Henri-Louis’ in 1791 the company was to lay dormant for over a century. The brand awoke to the true original quality and spirit of the House again in 2000, when the Swatch Group purchased the rights of Jaquet Droz. The emblematic 8-shape has found its clientele and has opened a new chapter in the book of Jaquet Droz.

The engineering genius of Pierre Jaquet-Droz has created the Writer, the Draughtsman and the Musician automata devices that travelled from one European royal court to another in the 18th century. He also created pocket watches and boxes with singing birds, urns, snuffboxes and amphorae, all proving his aesthetical and creative talent.

To prove that the founder’s spirit still alive within the walls of Jaquet Droz, the company recently manufactured new automata. In 2013 the Charming Bird Automation Watch evoked the heydays of the House, and last year the Signing Machine was introduced.

At the Zurich boutique of Les Ambassadeurs until February 28, 2015 you can admire “Le Génie de Jaquet Droz” exhibition, presenting a few of these creations and the great models of today. 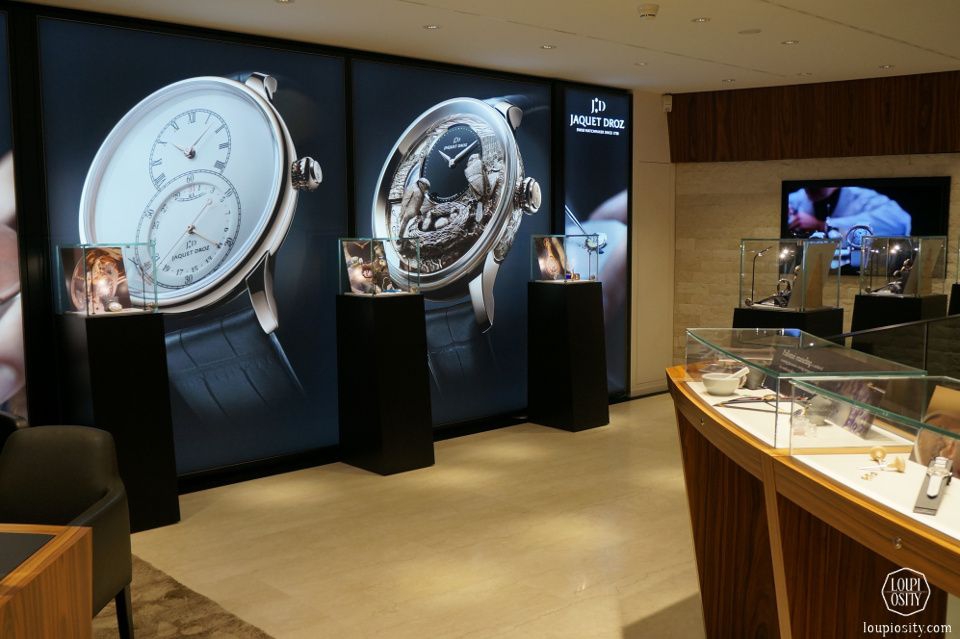 The manufacture was famous for its mastery of ornamental elements such as enamel, painting on enamel, foil, gem-setting, and engraving, sculpture and guilloché techniques.

Each and every one of the exhibited pocket watches is a masterpiece. There were several pocketwatches in the cabinets that were originally intended for the Chinese market, for example the so-called tapstrey pocket watch, made in the 1790s. This is an ultra-flat gold watch, decorated with an enamel back panel (gold and silver elements, and set with pearls). 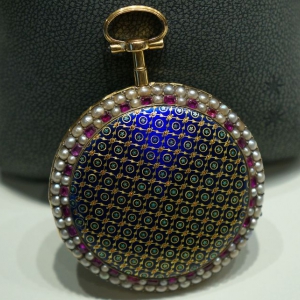 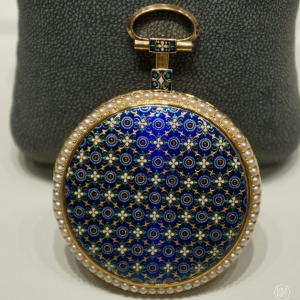 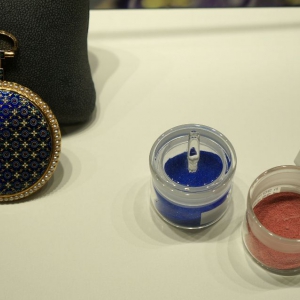 The “Pocket watch museum”, is a very interesting project: Jaquet Droz created a pocket watch entirely conceived around an original 18th century movement (the external parts have been lost). The movement, completely dismantled and cleaned, took six months to restore. The Jaquet Droz Ateliers d’Art designed a new 18-Carat gold case, set with rubies and pearls. The backside of the watch has a blue enameled background with delicate gold paillons and guilloché workings. 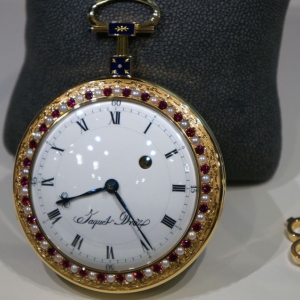 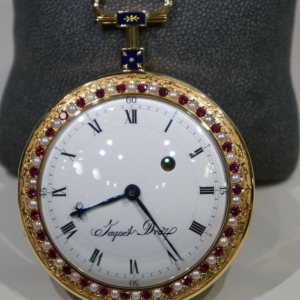 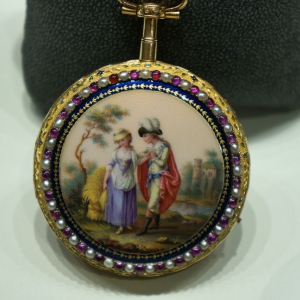 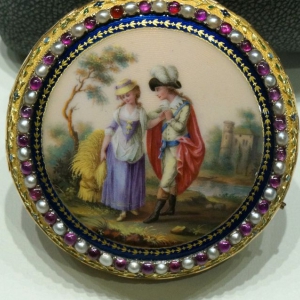 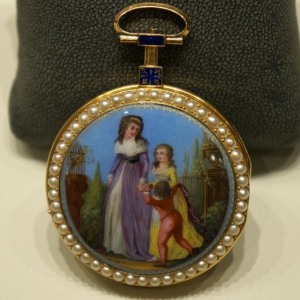 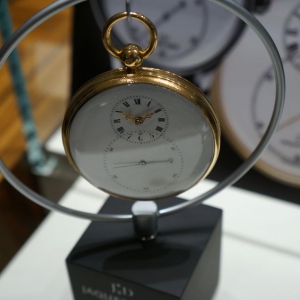 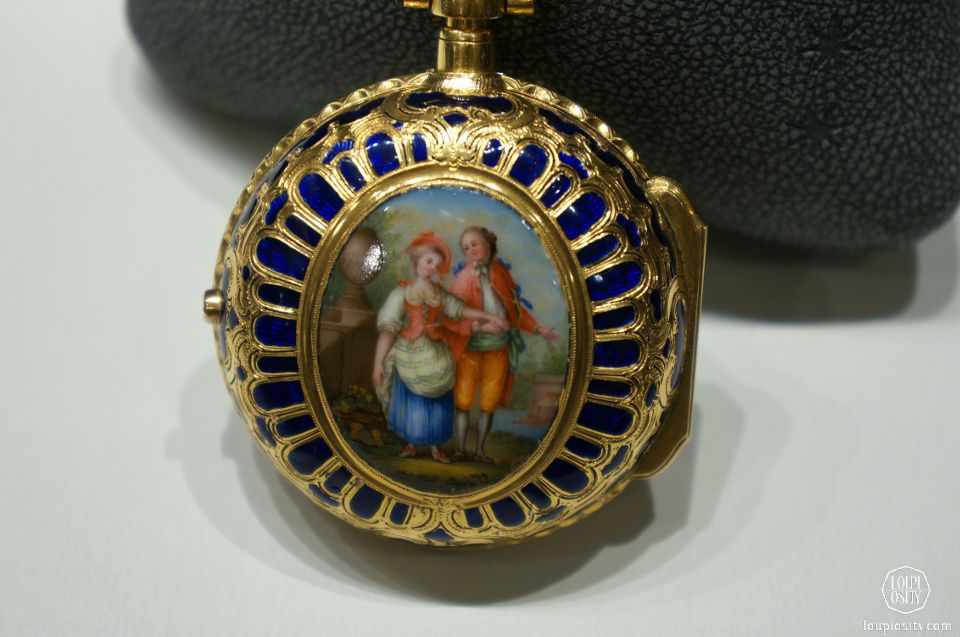 The “Amour et Fidélité” musical flask from circa 1790 is one of the unique creations mentioned above. It houses a tiny watch with a visible balance wheel. The amazing case is thoroughly adorned with pink flinqué enamel, flower garlands, ribbons and other exquisite motifs. On the backside there is a small painting of doves and a dog, symbolizing love and loyalty. 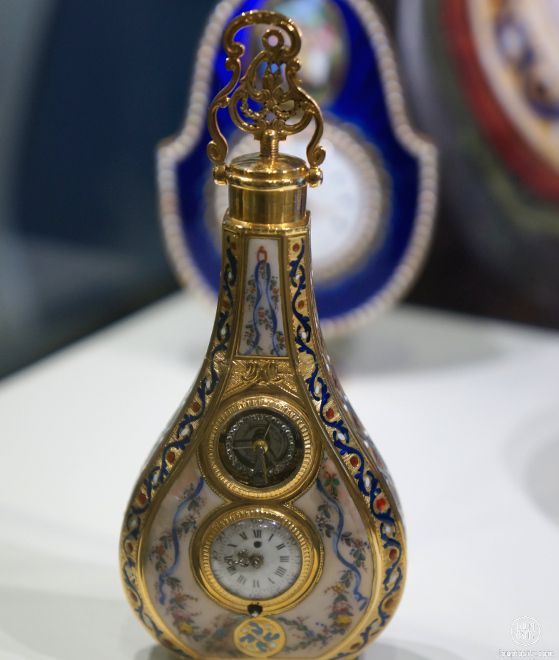 Last year in Basel we marvelled at a Jaquet Droz fluting bird automate, a little colourful singing birdie in an oval shaped gold case. Now in Zurich another automate is exhibited: a gold and blue translucent enamel, pearl set singing box, with a little watch on the side. If you click on a bolt, the tiny gold animal rises, sings and moves, then folds back automatically into the box. 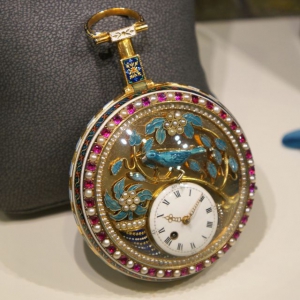 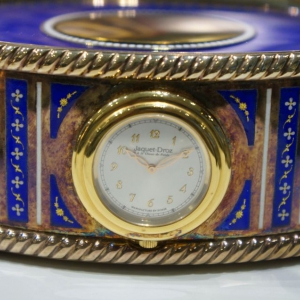 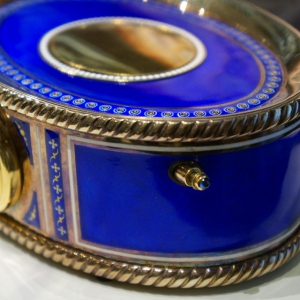 Last but definitely not least you can browse around more recent and successful models of the brand, including some special editions. 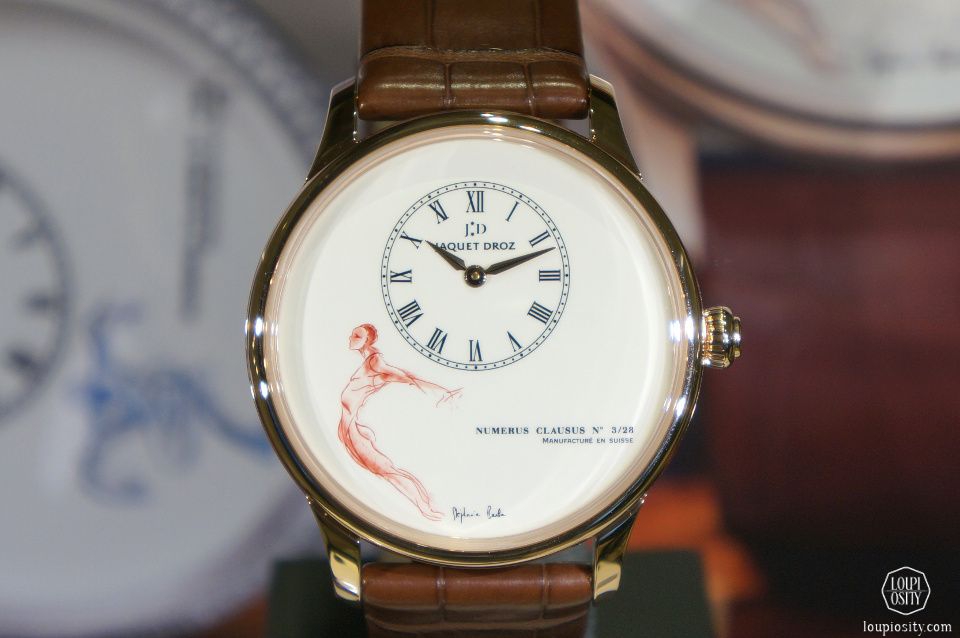 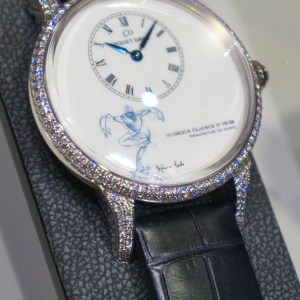 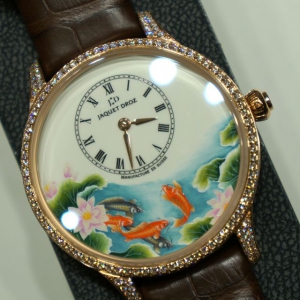 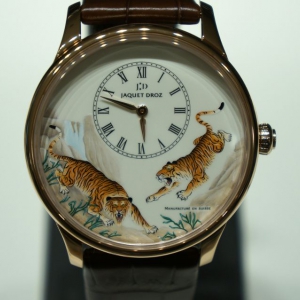 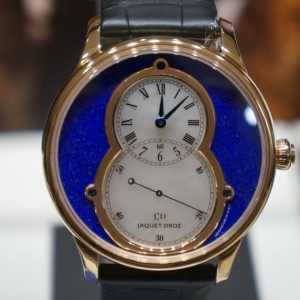 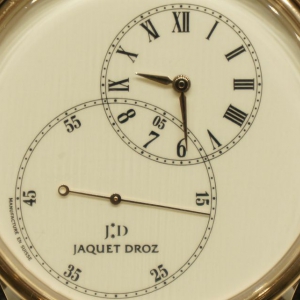 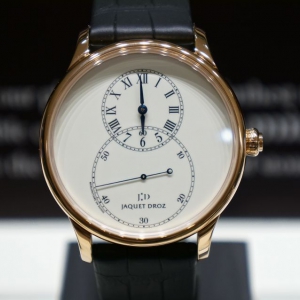 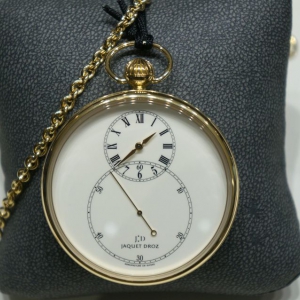 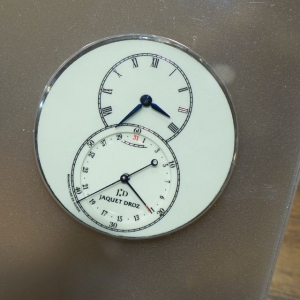 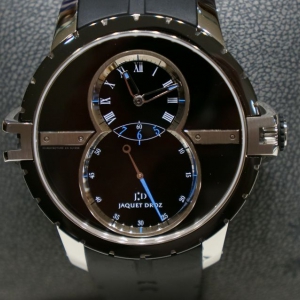 Reuge at the Geneva Watch Days 2021 We visited the most musical suite of the Beau Rivage Hotel during the Geneva Watch Days 2021. Reuge filled the historic space with melodies played by stylish mechanical automations.Audemars Piguet at the Dubai Watch Week 2021 Audemars Piguet took part in the 5th edition of the Dubai Watch Week from 24 to 28 November 2021 at the Gate in the Dubai International Financial Centre with a booth and exhibition space, dedicated mainly to the Royal Oak Offshore.Only Watch 2021 The ninth edition of the Only Watch auction will be held 6 November 2021 in Geneva. The selection includes unique timepieces created by the finest brands to support the research of Duchenne muscular dystrophy.