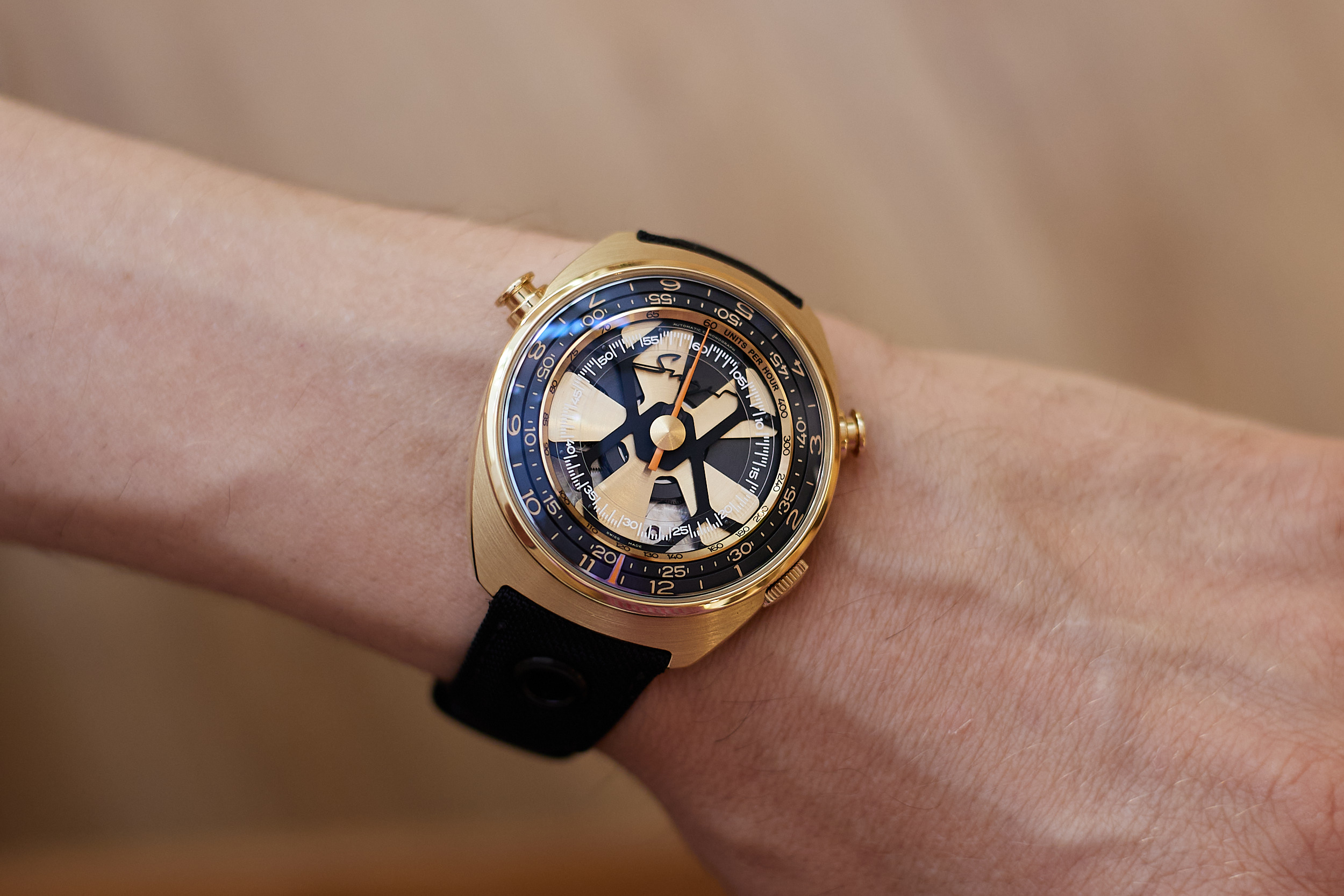 Singer Reimagined showcased their recent additions to the Track1 and the Flytrack collections at the Geneva Watch Days. The Track1 SKLT Edition reveals the dial-side rotor for the first time, while fanatic coffee aficionados can count on (and with) the Flytrack Barista from now on.

In spite of the amazing development of materials and manufacturing processes, the component that makes outstanding timepieces remains the human factor. Creativity, some sort of fanaticism and perseverance have realised solutions formerly unthinkable and projects that look a definite ‘no-go’ in business plans but the world would be poorer without them.

The story of Singer Reimagined falls into this bracket. With the eyes of an avid industrial designer, Marco Borraccino has been seeing the world through the lens of aesthetic beauty and usability. He looked at chronographs with admiration but also with a critical eye, and realised that their prime elapsed time measurement function is blunt or even taking a back seat sometimes. He saw this issue from a design perspective, while totally isolated, watchmaker Jean-Marc Wiederrecht of Agenhor has been exploring the same issue from a mechanical engineering viewpoint for years. They met when Mr Borraccino, and his business partner and friend the musician and Porsche 911 restaurateur Rob Dickinson searched for a movement shop who could realise their design idea. An idea, which ended up coinciding with what Mr Wiederrecht aimed for: a central co-axial display of chronograph time, while the local time is outcast to the peripheries. The result became the Track 1 in 2017, which took the GPHG Chronograph watch prize home the following year.

The simple display of the vast information required a completely new approach to the movement and thus brought new levels of complexity. The permanent timekeeping function and the energy source is located on an annular construction. The middle is kept empty, which is occupied by the central chronograph mechanism. The two are linked by a clutch, operated by the command unit with a column-wheel system. Interestingly, the oscillating weight of the automatic unit is located on the dial-side, making the back totally open to observe and leave the rotor invisible. The ingenious Agengraph 6361 movement is as beautiful as it can be (and it provides the foundations of other watches like the H. Moser & Cie Streamliner Flyback Chronograph Automatic or the Fabergé Visionnaire Chronograph). 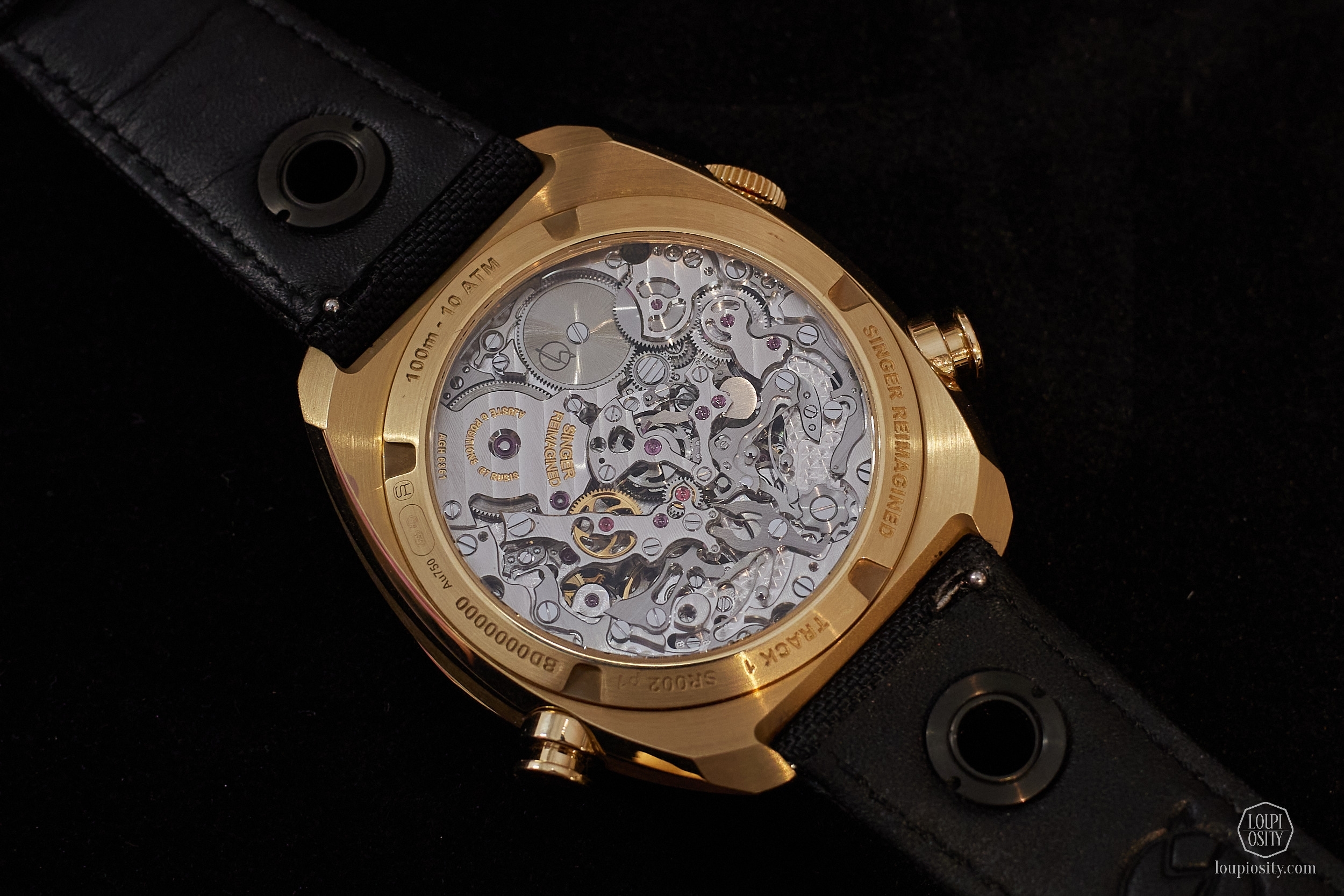 As mentioned, the minutes and the hours are displayed by two rings. The minutes ring is on a wheel the creators called the Fuchs wheel.

The Porsche 911S pioneered the first light-weight forged aluminium-based wheels on series production cars in 1967. It was developed by Otto Fuchs AG for Porsche. They approached the car manufacturer with a wheel created by pressing solid aluminium blocks under extreme pressure. The process made the wheels not only 38% lighter, but very enduring. The initial tapered spokes were changed by Ferdinand Porsche Jr to a four-leaf clover design for ‘reasons of style and appearance’. The Fuchs felge has lived ever since in many iterations.

Up until the SKLT Edition, this Fuchs wheel was secretly revolving under the dial. The 2022 novelty brings this part into the light in a warm golden shade by omitting the traditional dial. Only a black piece of a hexagonal mesh remained, which holds a sapphire ring for the 60 seconds chronograph scale and a Singer logo. The logo and the mesh are a single part. 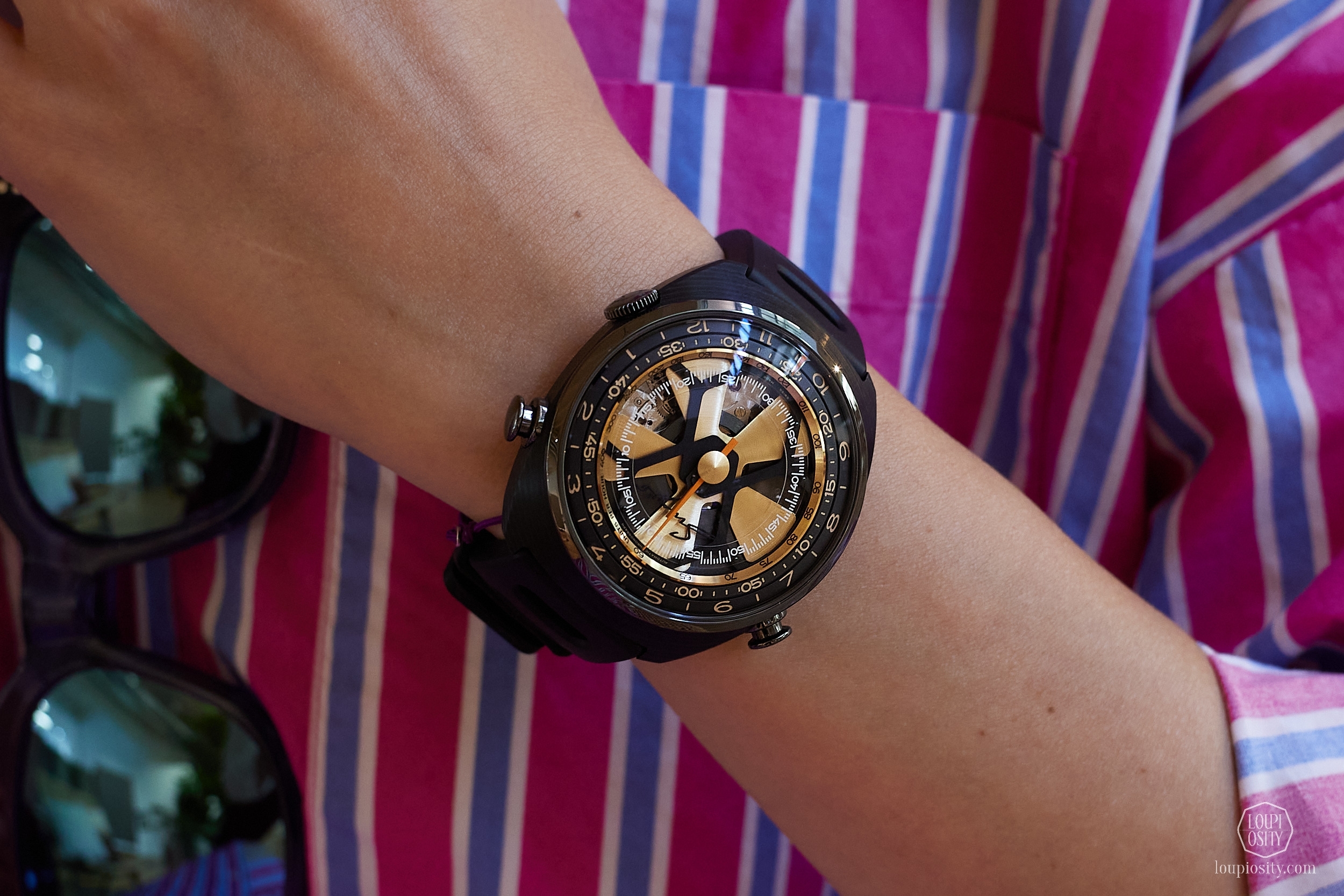 The open dial reveals the rotor too, which oscillates under the Fuchs wheel.

The dominant colours are black, 18k gold and orange and white for the chronograph indication. The surfaces have alternating finishings of brushing, sand-blasting and hand-polishing.

The Singer Track1 – SKLT Edition is created in a 15-piece limited edition. 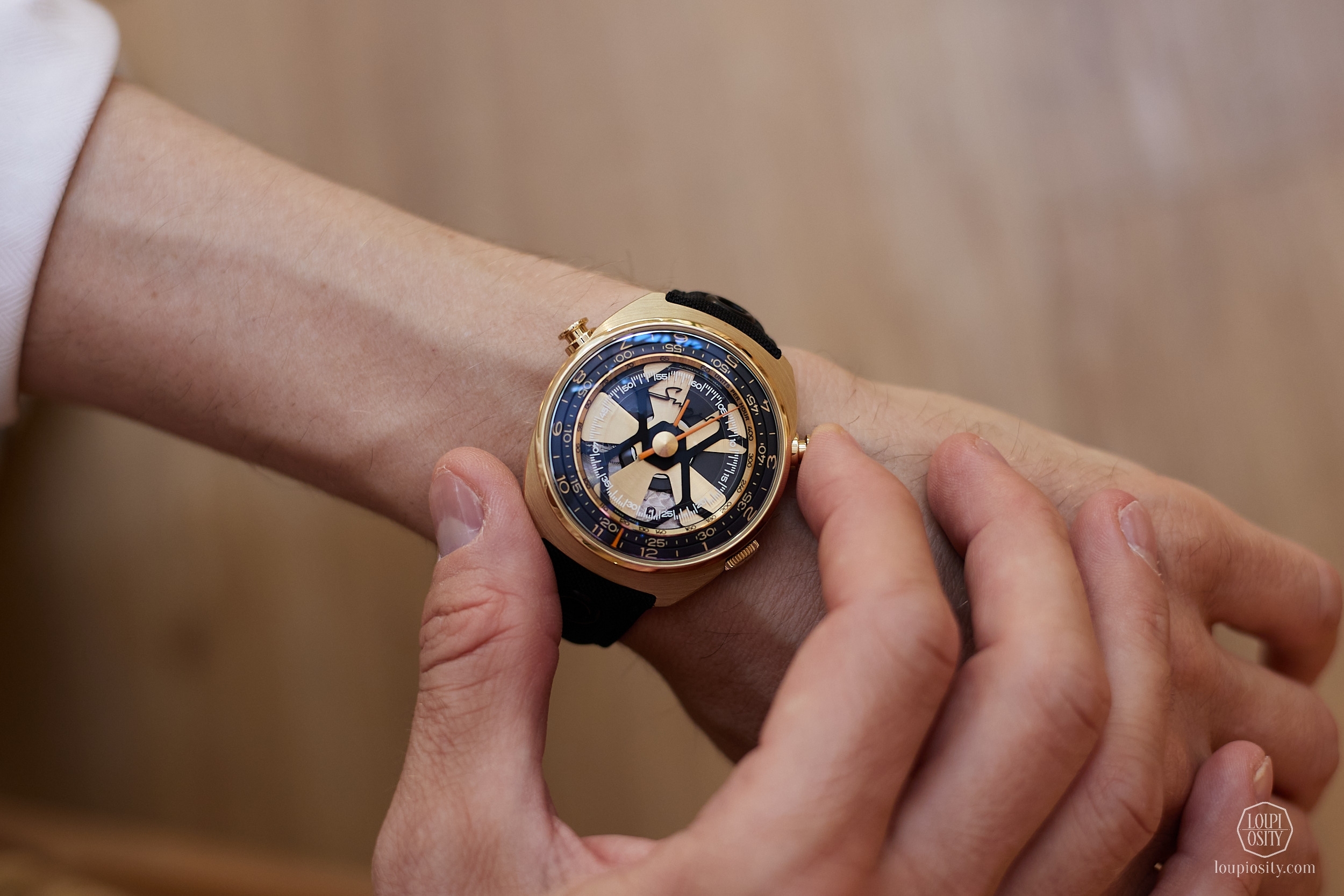 Following the launch of the Track 1 with the 477 components Agengraph 6361, Singer Reimagined created a simpler chronograph for short (less than 60 seconds) elapsed time measurements in 2020. The Flytrack debuted with a Tachymeter (speed), Telemeter (distance) and a Pulsometer (heart rate) scale in different colours. This year, Marco Borraccino paid tribute to another personal passion: espresso brewing. The Flyback Barista presents a scale to measure the extraction time of different coffee styles. 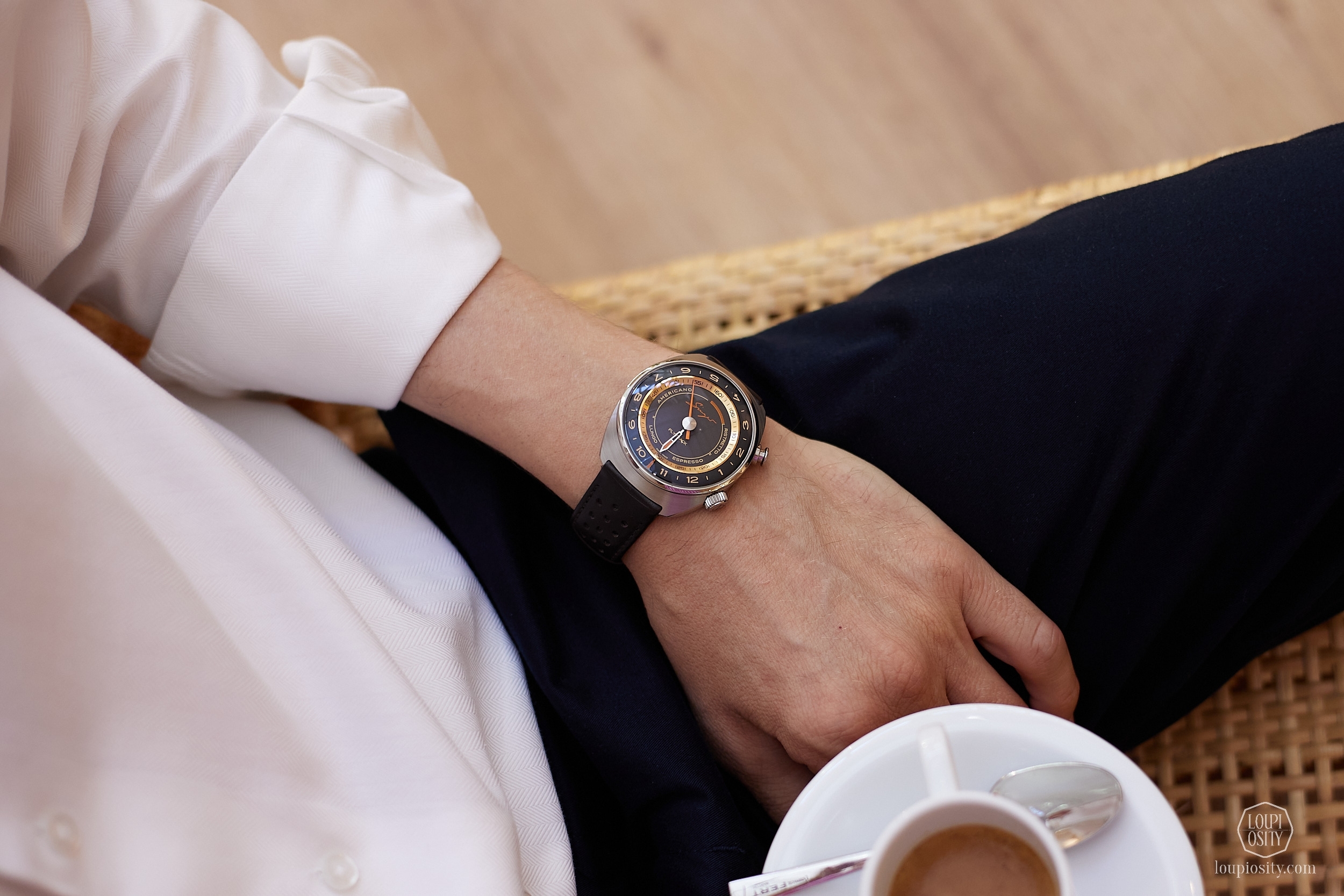 There are many factors for the perfect coffee. Beans, roasting, grinding, temperature, water quality, pressure and brewing time all impact the taste. Experimenting with these is a form of art and a source of joy. The Flyback Barista offers an instant brewing time measurement for a Ristretto, Espresso, Lungo or Americano. Just like in its siblings, you hold the pusher to reset the sweeping seconds hand and release when the hot water starts its journey into the coffee. The first 7 seconds on the scale is marked with orange, representing the time while the hot water initially infuses the ground coffee in the portafilter, followed by the sections for the various coffee lengths.

The movement AG6364 is based on the Track1’s AG6361 and although it’s simpler it is still 314 parts providing the flyback, the zero-reset and the time functions. The hours remained on the circumference scripted on a wider ring with golden numerals, while minutes are displayed by a central hand.

The coffee coloured hues of the dial are matched with a dark brown leather strap. They are contrasted by the circular, brushed steel case, which reminds me of the colour mix of the coffee machines and the dark, rich and foamy liquid.

The Singer Flytrack Barista Edition is created in a 30-piece numbered batch. 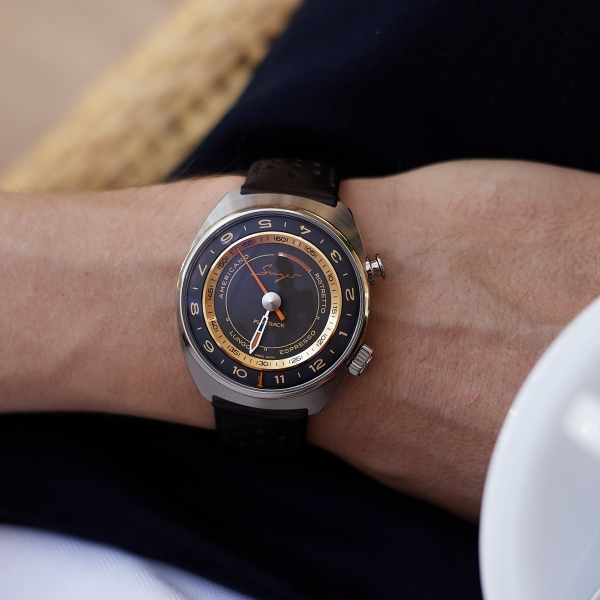 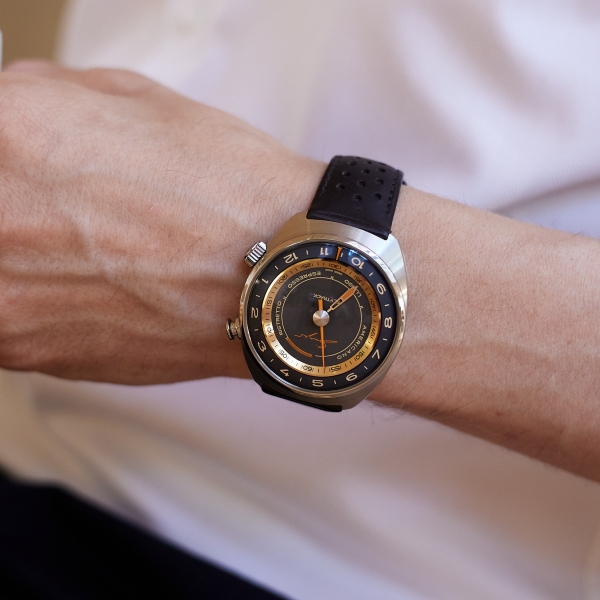 Independents at the Dubai Watch Week 2021 Under the sunny Dubai sky and the arch of the DIFC Gate Building independent watch brands showcased their special pieces in a great atmosphere. The Brands’ Exhibition hall was bright with smiles and loud from the chit-chat while a number of astonishing models wandered from wrist to wrist. Below are a few exceptional creations by independents.Geneva Watch Week A great amount of finewatchmaking brands will present their latest novelties to press, retailers and to the public in Geneva From 30 March until 5 April with the hybrid concept - online launches will be dedicated for those who are not able to travel to Switzerland this spring.H. Moser & Cie Streamliner Flyback Chronograph Automatic… H. Moser & Cie showcased the blue edition of the Moser Streamliner Flyback Chronograph Automatic on 11 November. We spent a very happy long weekend in the company of the novelty before the premiere.