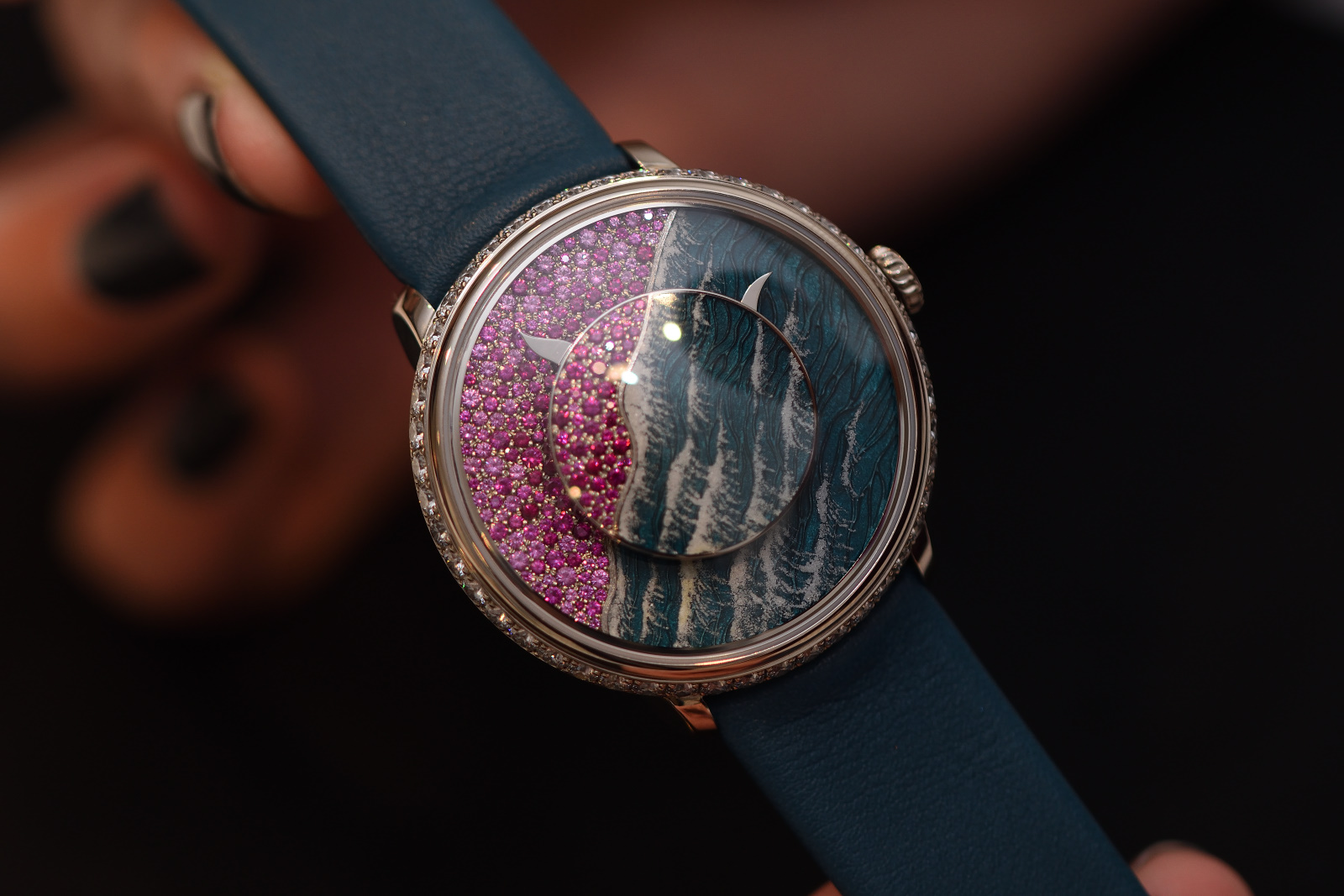 Carl Fabergé’s workshop produced generously adorned and simpler table clocks in his time. With the recent award winning models, the plan of Aurélie Picaud, Director of Fabergé Timepieces, to restore her company’s new-age image as a creative contemporary fine watchmaking firm, seems to be working out.

The success of the Lady Compliquée Peacock (2015 Ladies’ High Mech watch prize at Grand Prix d’Horlogerie de Genève) and the Visionnaire DTZ (2016 Travel Time watch prize at GPHG) was not accidental. Ms Picaud managed to convince Jean-Marc Wiederrecht (Agenhor) for the collaboration, in which Fabergé delivers its artistic skills and Agenhor creates genuine movements. The increasing trust in joint projects is well represented by the fact that Agenhor’s first own product, the self-winding AgenGraph (cal. 6361) which will move other brand’s timepieces too, was first installed in Fabergé’s new Visionnaire Chronograph.

We visited Fabergé at Baselworld 2017.

This is a chronograph with a completely unusual architecture. All chronograph hands are centred, surrounded by the iceberg shaped hour and minute hands for the time. The timepiece has two flavours: one with black DLC treated ceramic and dark grey DLC treated titanium case, and another in 18kt rose gold and titanium. As opposed to the black, the latter edition has an opaline dial with TC1 luminescent coating.

Although time is displayed similarly as on the Visionnaire DTZ, behind the surface a completely different calibre is hiding.

In some of Agenhor’s previous works, engineers had to free up space in the centre of the complication for certain dial animation mechanisms. Therefore, they organized the entire going train in a ring and formed a hole in the middle. Mr Wiederrecht imagined using the space for a chronograph so that all hands can be centred.

This also allows a layout where timing and chronograph mechanisms are level for a thinner overall calibre. When the chronograph function is started, the driving wheel from the ring and the central chronograph wheel horizontally engage. Normally, it takes some time until the teeth mesh and it makes the chrono seconds stutter. Agenhor’s genius also surfaced in the way they ensured an accurate and smooth start. They employed wheels with a special friction surface and no teeth. Upon activation, they engage smoothly and instantaneously. Both wheels also have a safety wheel vertically offset and with wide spaces between teeth, which normally do not come into contact. If for some reason the primary wheels should slip, they stop the unwanted movement.

The mechanism also excels in readability. The movement of the chronograph hands is not a continuous flow, but they jump precisely to the rhythm of the time they measure. This means that they will be standing dead sharp on the index they should be when stopping. Engineers applied stepped snail cams, which accumulate energy to release it at once when a full revolution is made, which moves the hand sharply. This system is used for every chronograph indication, seconds, minutes and hours.

If you are interested in knowing more about the AgenGraphe (cal. 6361), I suggest you play the video of the WatchesTV. 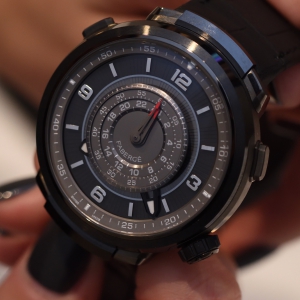 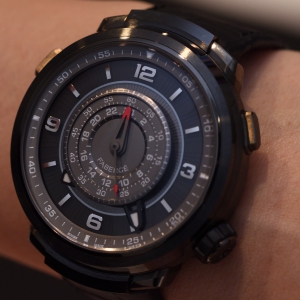 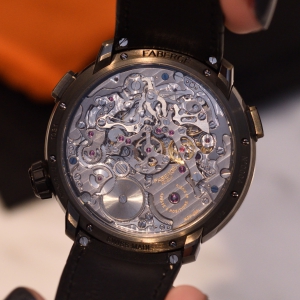 The timepiece is a beautiful collaboration between Fabergé, Gemfields and the cool Scottish designer, Fiona Krüger.

Fiona lived in South Africa for three years and had vivid memories about Mozambique. As she recalled, if you ask somebody about Mozambique, the first things mention is the “blue water, soft white sand, and red earth”. The two-level 36mm dial of the Lady Libertine timepiece gave Fiona a special “canvas” to paint the beautiful landscape.

The red soil shines in the shape of rubies and pink sapphires. Rubies are said to represent passion, protection and prosperity and in this project, these gems came from Gemfilelds’ Montepuez mine in Mozambique.

Master Enamellist, Anita Porchet realized the ocean on the dial using enamel. She is one of the most sought-after enamel artists, who also worked with Vacheron Constantin, Piaget, Patek Philippe, Hermès and Chanel, just to name a few. She was awarded the “Hommage au Talent” prize by the Fondation de la Haute Horlogerie last year.

In Basel, Fiona explained that she pictured the ocean and the coast like an abstract painting and asked Anita to lash up the waves with rough brush marks. To model it, Fiona made human sized paper canvasses with the silhouettes of the dial and painted them with strong and fast movements. Anita finished it brilliantly and the hand-enamelled guilloché dial received tiny silver lines to visualise the sunlight riding the waves.

Fitting the motion image perfectly, the hands took the shape of waves or shark fins.

The movement is the hand wound AGH 6911. 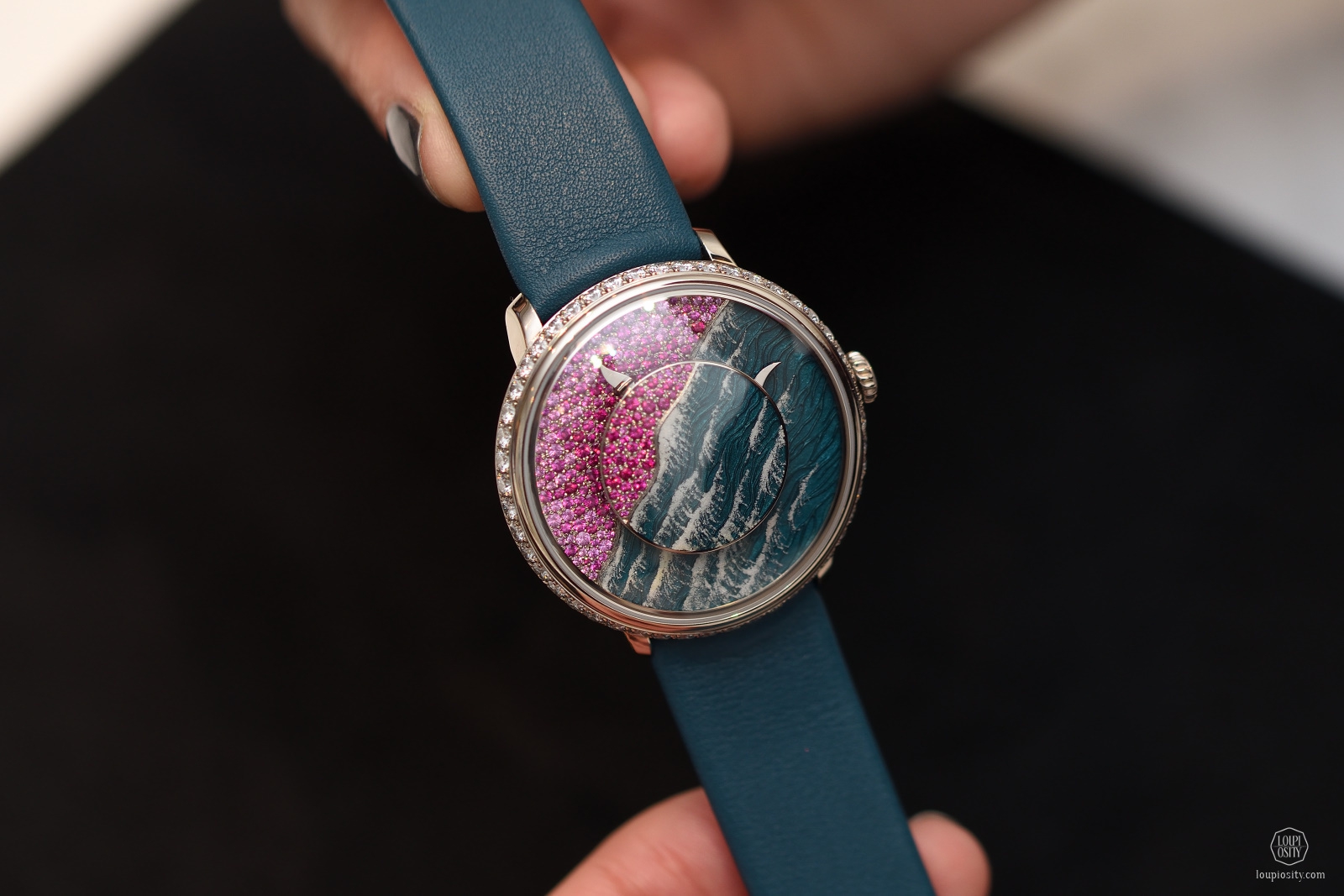 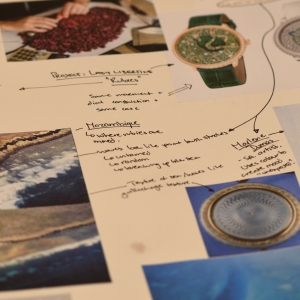 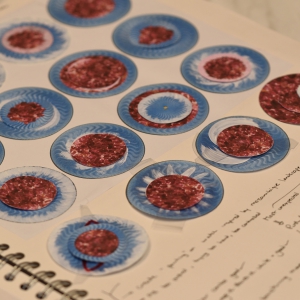 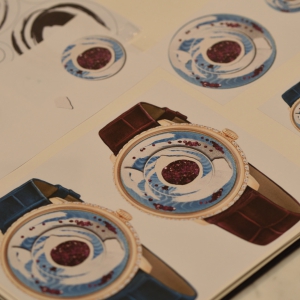 Being Fabergé, jewellery novelties were also presented at Baselworld.

The open-set Fabergé Bangles play with the most recognisable motif of the House, the egg-shape. The bangles are available in different versions: white, yellow or rose gold, pavé-set or enamelled, wearable on its own or as stackable accessories.

Little artworks in the Heritage Collection are inspired by Fabergé’s original jewelled masterpieces, such as the enamelled Fabergé Eggs. These locket pendants open to reveal a tiny 18 karat yellow gold animal; a rooster, a Lady bug and a monkey. The decorations include enamelling, guilloché , hand-engraving or invisible gem-setting. 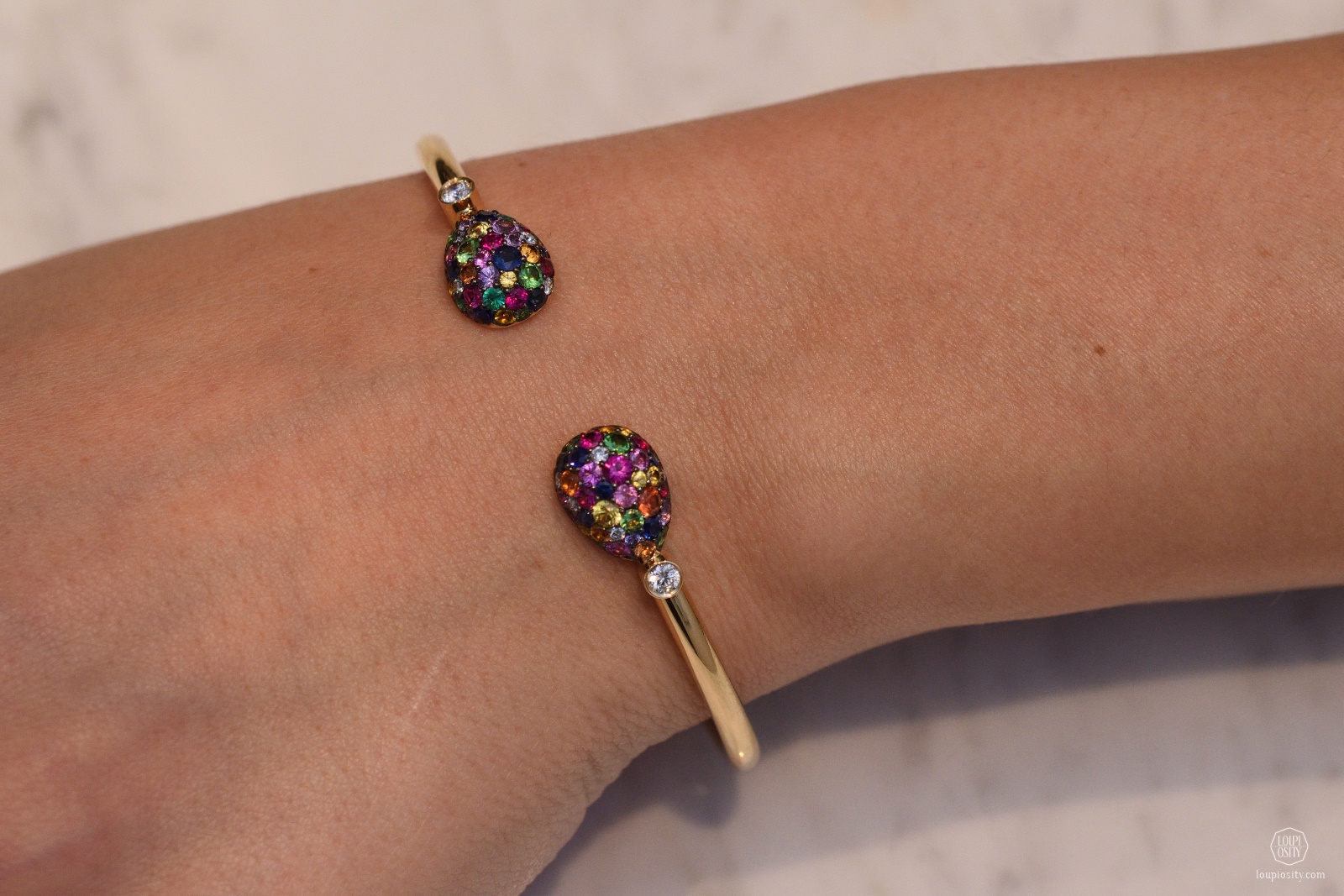 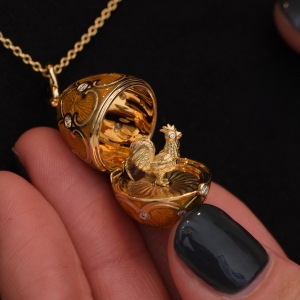 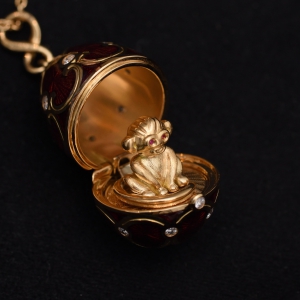 Last autumn Fabergé launched the #SayYesinColour campaign to promote the idea of colour gemstone engagement rings, in which emeralds, rubies and sapphires are set. The customer’s choice usually depends on personal stories connected to the stone or the symbols of the colour or of the gemstone itself.

Many cultures and nations have their own association or tradition relating to colours and gemstones. For example emeralds were known as powerful love and fertility charms, rubies (“ratnaraj” – “king of the gemstones” in ancient Sanskrit) are the gems of intense emotion and blue sapphires symbolise truth and faithfulness. These beliefs might be out-dated today, but could still influence decisions regarding important jewellery acquisitions, such as an engagement ring. The gemstones are set and designed in a very Fabergé way: the gold-fluting technique gives a contemporary finish to the rings. 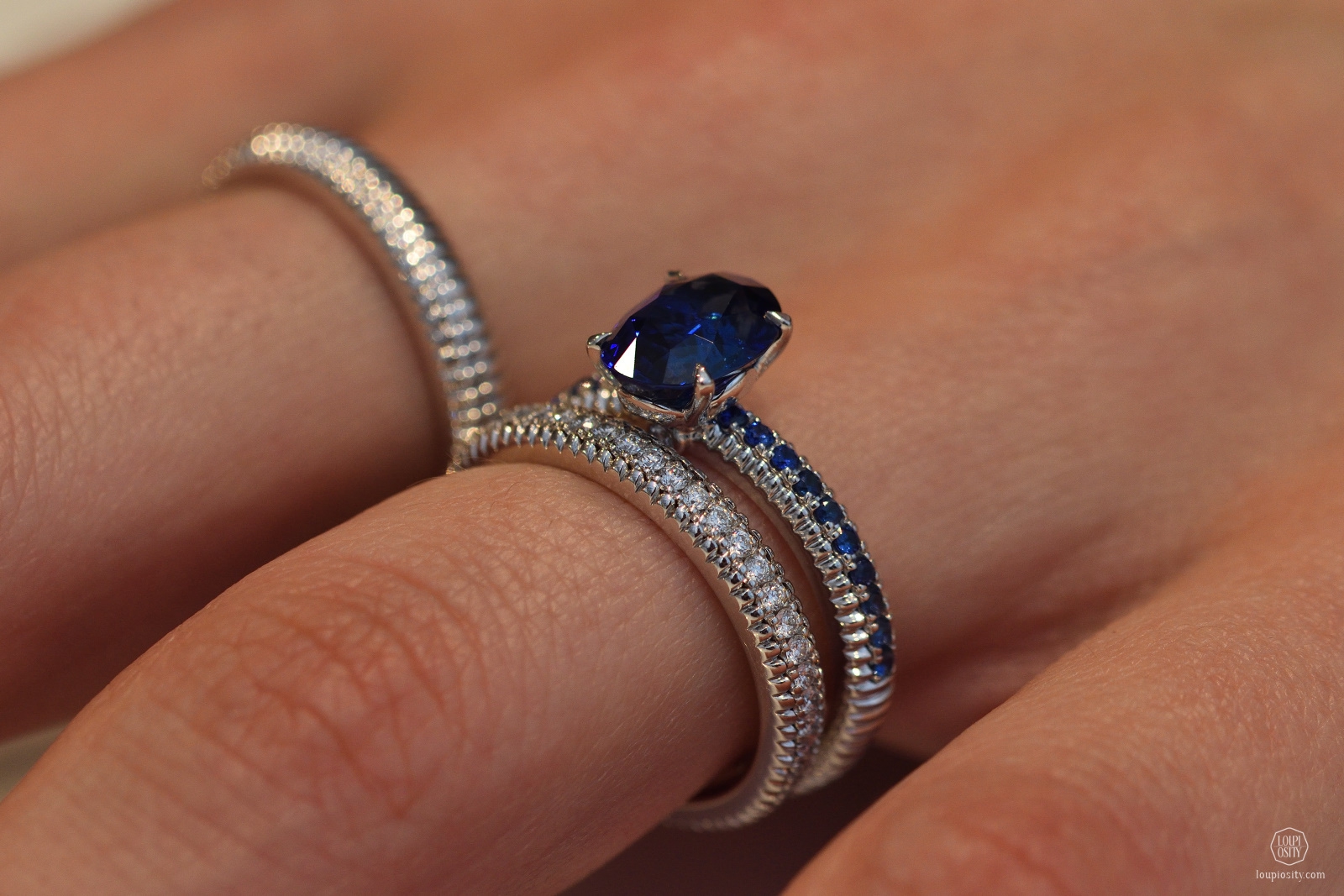