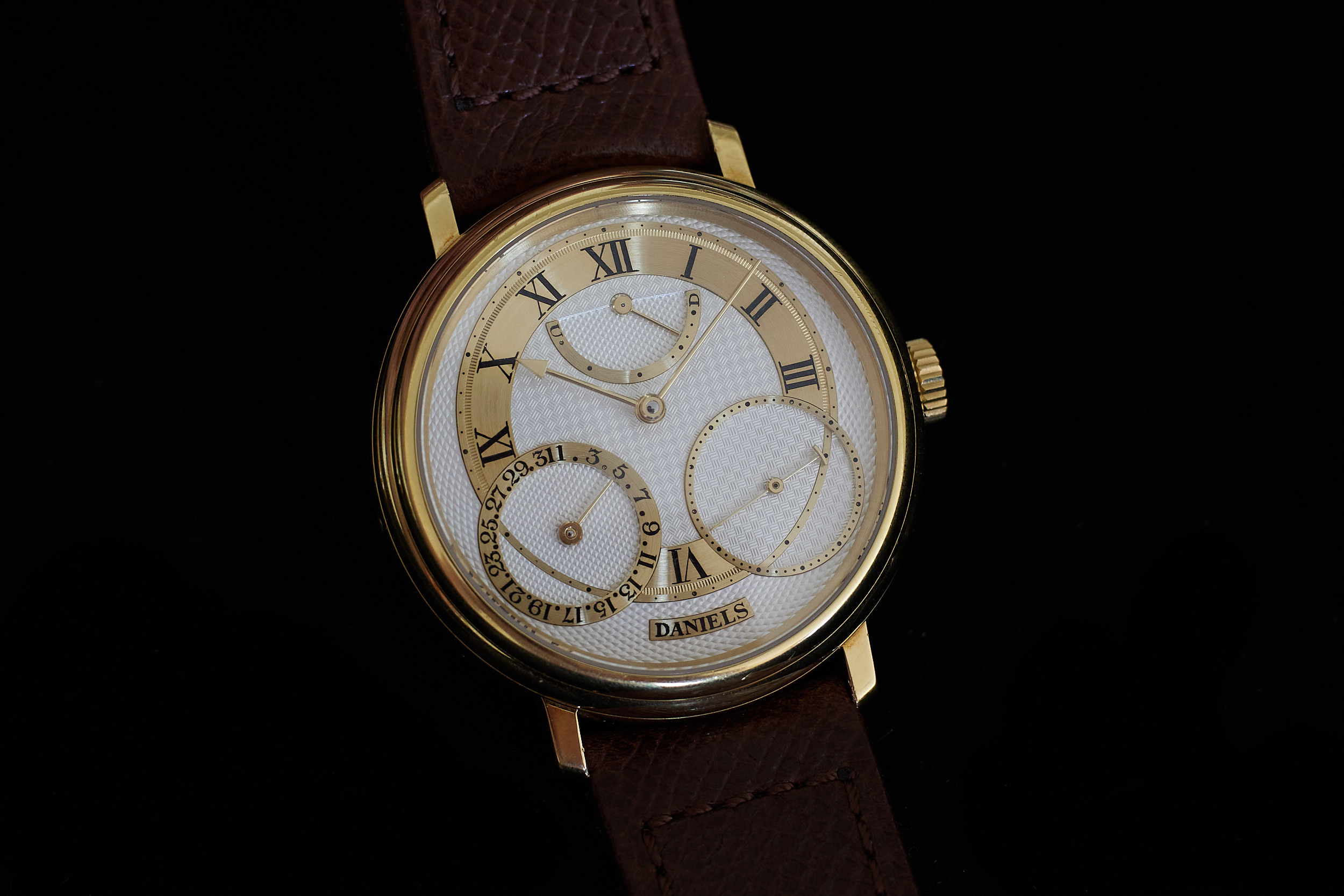 The late summer Geneva Watch Days gave Phillips Watches an excellent opportunity to showcase some of the world’s finest collectors’ watches to be auctioned this Autumn. The batch includes three fantastic examples by George Daniels.

Phillips in Association with Bacs & Russo is already a regular at the Geneva Watch Days. This year they moved into one of the suites of Hotel Beau Rivage for a preview of the online Geneva Sessions and the Geneva Watch Auction: XVI. The highlights of the GWA XVI include three exceptional unique pieces by the founding father of independent watchmaking, George Daniels.

The English watchmaker, George Daniels (1926-2011) is generally considered to be on of the greatest horologists of the 20th century. His best-known contribution was to develop the co-axial escapement, which helped to increase the performance of the mechanical watches.

During his lifetime and by his own hand, George Daniels created 23 pocket watches and just two unique wristwatches. In addition, and in collaboration with Roger Smith – his one and only protégé – two further tourbillon wristwatches and two production series of wristwatches; the Millennium and Anniversary watches have been produced.

Alexandre Ghotbi, Head of Watches, Continental Europe & Middle East says, “… George Daniels was one of the greatest watchmakers in history, and it is an honour to present not only a unique tourbillon wristwatch with spring case, made fully by hand by Daniels himself and appearing on the auction market for the very first time, but also two of the most sought-after wristwatches by an independent watchmaker ahead of the Geneva Watch Auction: XVI in November. For Daniels, a watch had to have historic, intellectual, technical, aesthetic, amusing and useful qualities, a mantra that he applied to all his creations, with these three examples being no exception.”

George Daniels only made two wristwatches for his own personal use; one of these is the double-dialled spring case watch with one-minute tourbillon and calendar, completed in 1992. It is now being offered in public at auction, for the very first time.

It is considered as a ‘tour de force’ wristwatch (‘feat of strength’ in French, referring mostly to timepieces featuring a real technical and horological feat), as the tourbillon and its implementation serve as a showcase of the skills and ingenuity of a watchmaker.

The yellow gold watch has a spring case, enabling the watch to be popped open to reveal the back dial, which shows the calendar indication and tourbillon escapement. The winding crown is between the lugs at 12 o’clock, not to disturb the opening mechanism.

On the watch face there is a hand-guilloché silver dial with contrasting gold chapters showing hours, minutes, and interlaced seconds, with a subsidiary for power reserve indication. 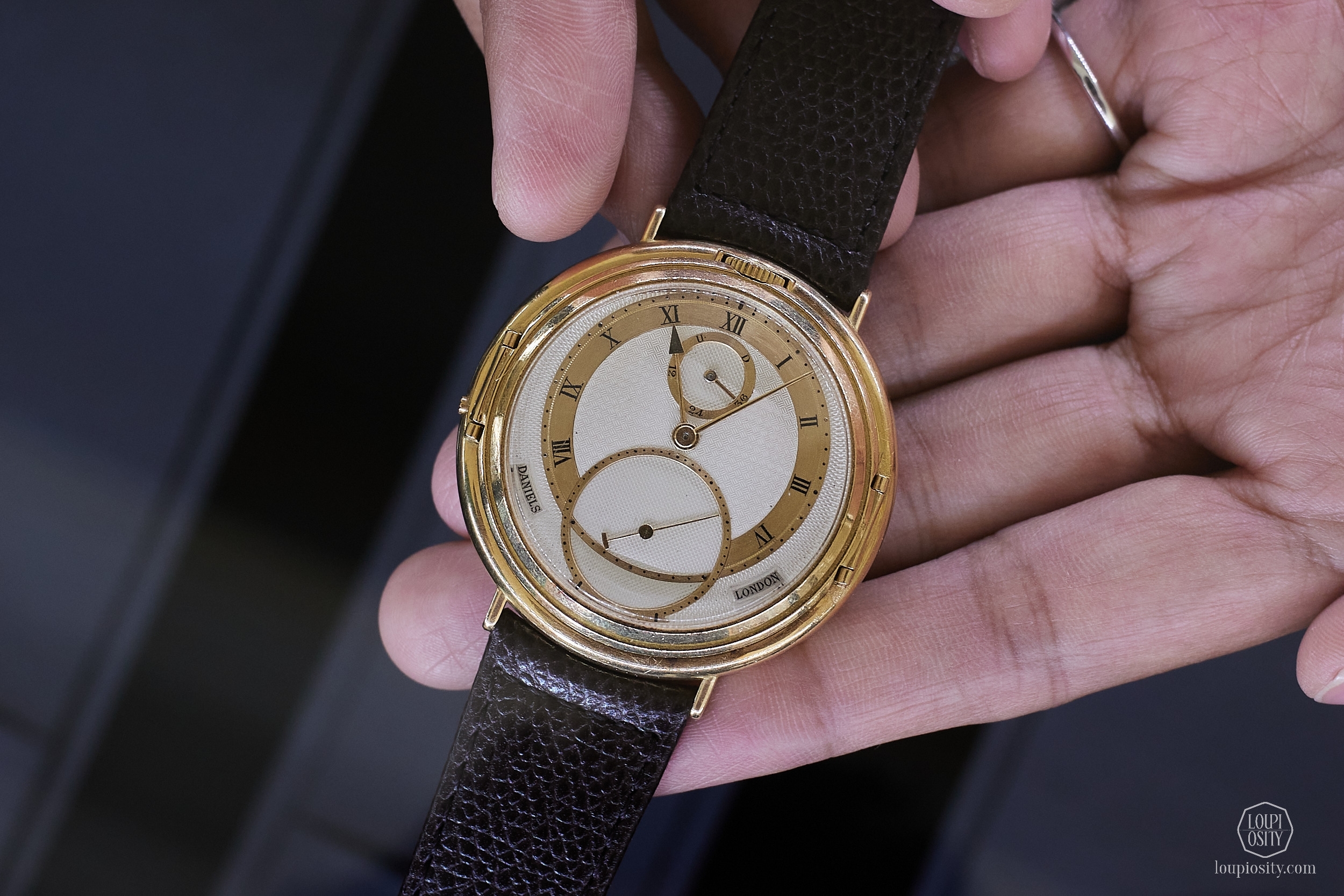 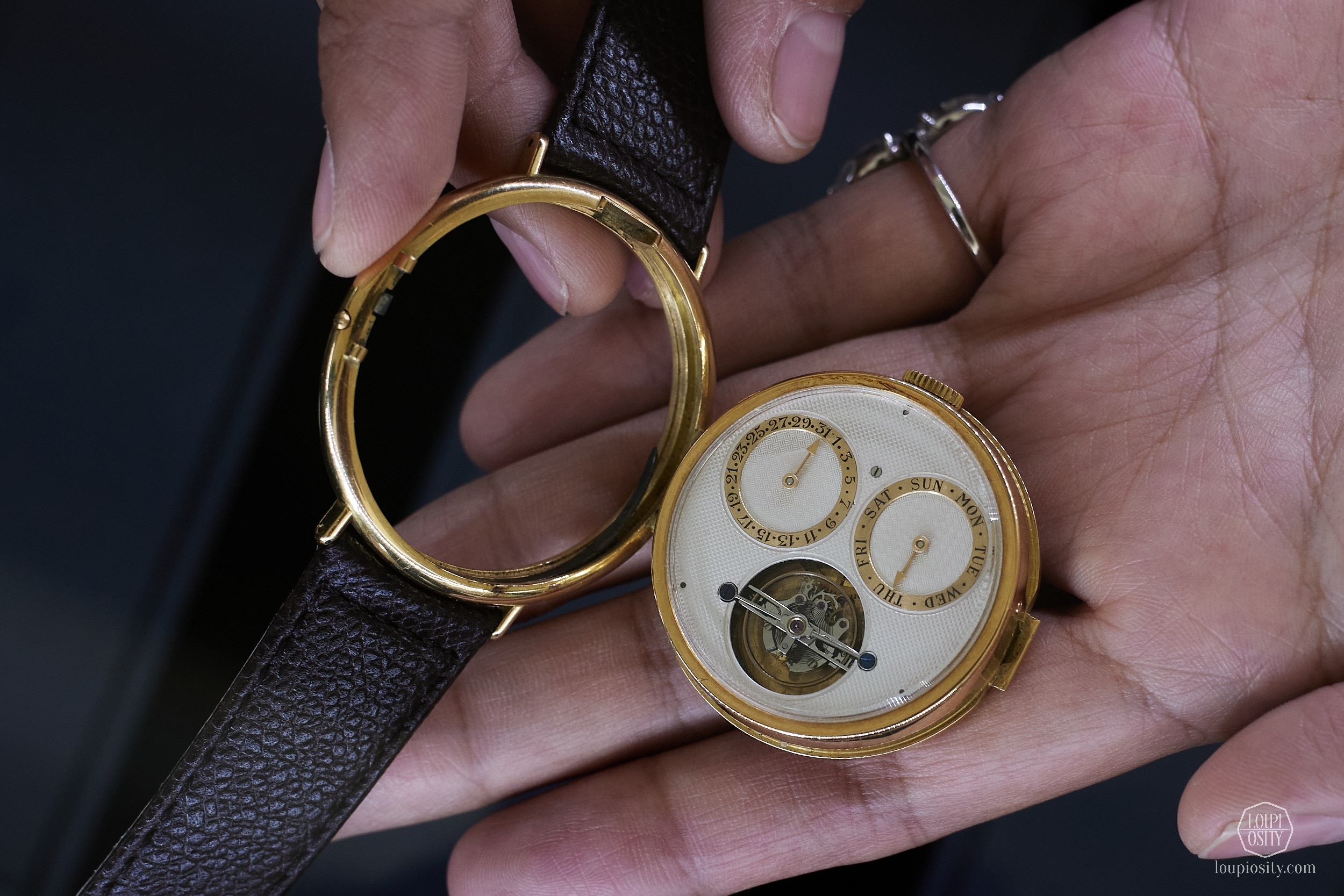 As mentioned above Daniels is very well known for his co-axial escapement mechanism. The Anniversary timepiece celebrated the 35th anniversary of this invention in 2010. He worked with Roger Smith, who today is recognised as his successor, to collaborate on producing the series together.

It is a manually wound yellow gold wristwatch with a power reserve indicator, calendar mechanism and seconds dial in a style reminiscent of the appearance of the famous tourbillon chronograph pocket watch created by Daniels in 1994.

The timepiece has been gaining momentum – earlier this year Phillips sold a platinum George Daniels Anniversary at their New York auction for USD 2,389,500. 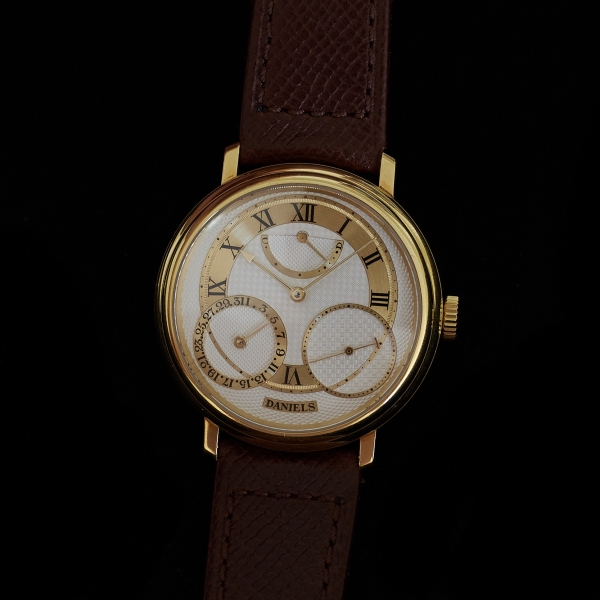 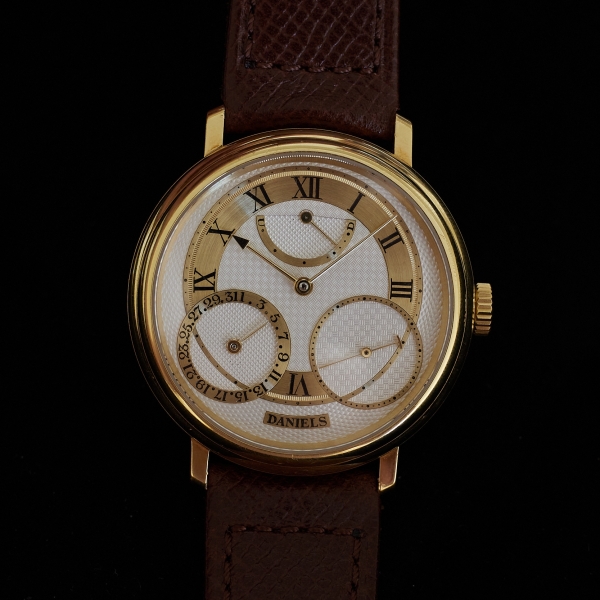 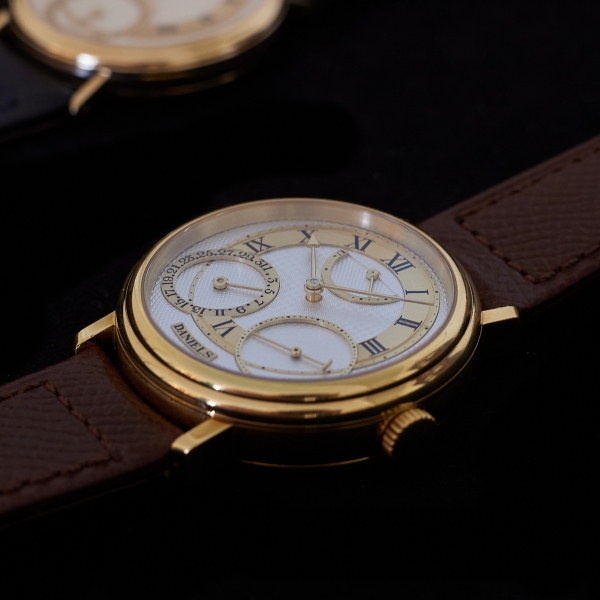 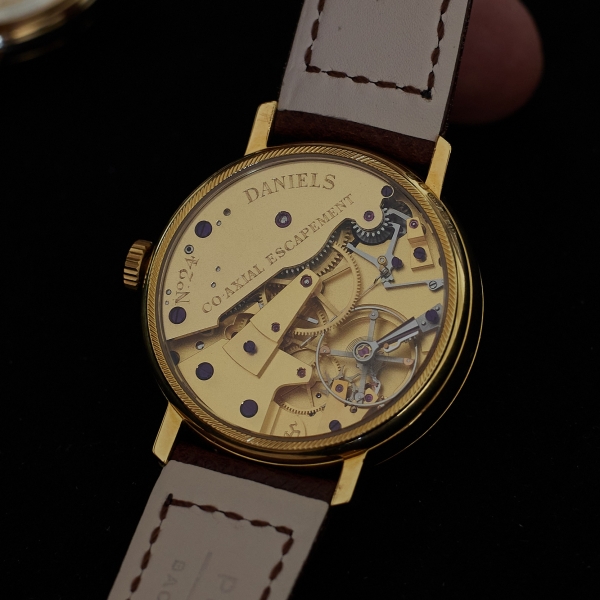 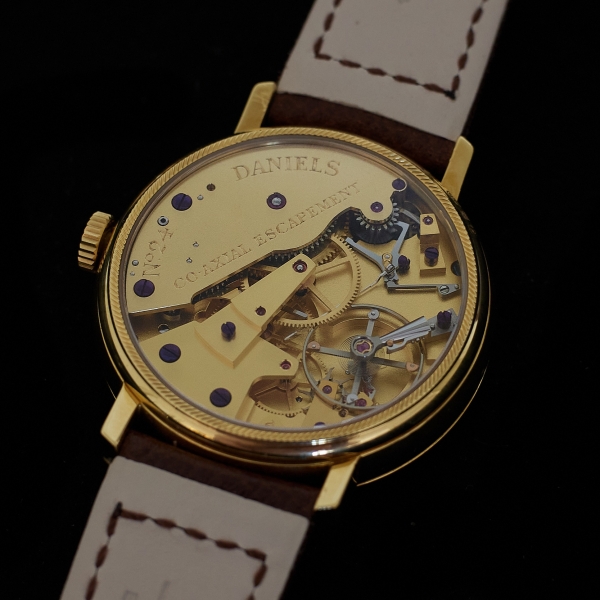 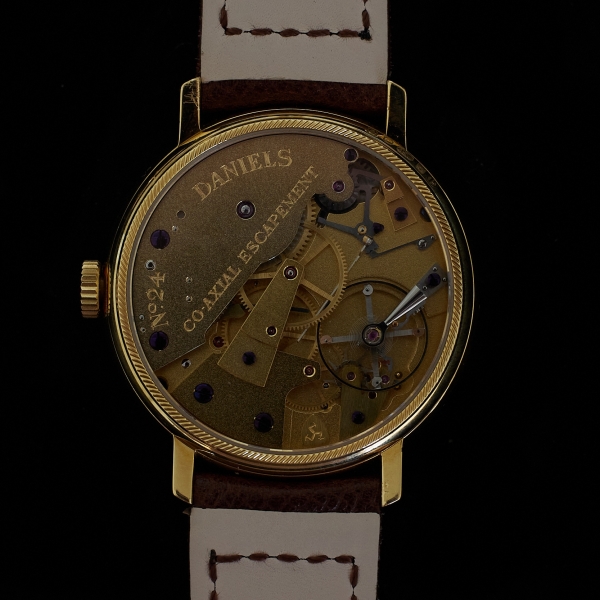 This model was created in 1999 to celebrate the arrival to the market of the new co-axial escapement and is the first example of a Daniels watch made in series, which was limited to 48 pieces, according to the Phillips catalogue. This watch features a heavily modified Omega calibre with the co-axial escapement as well as Daniel’s distinctive guilloche dial.

The case back showcases the nicely decorated movement and the ‘Dr M C Faulkes 00’ engraving on the upper side of the case. 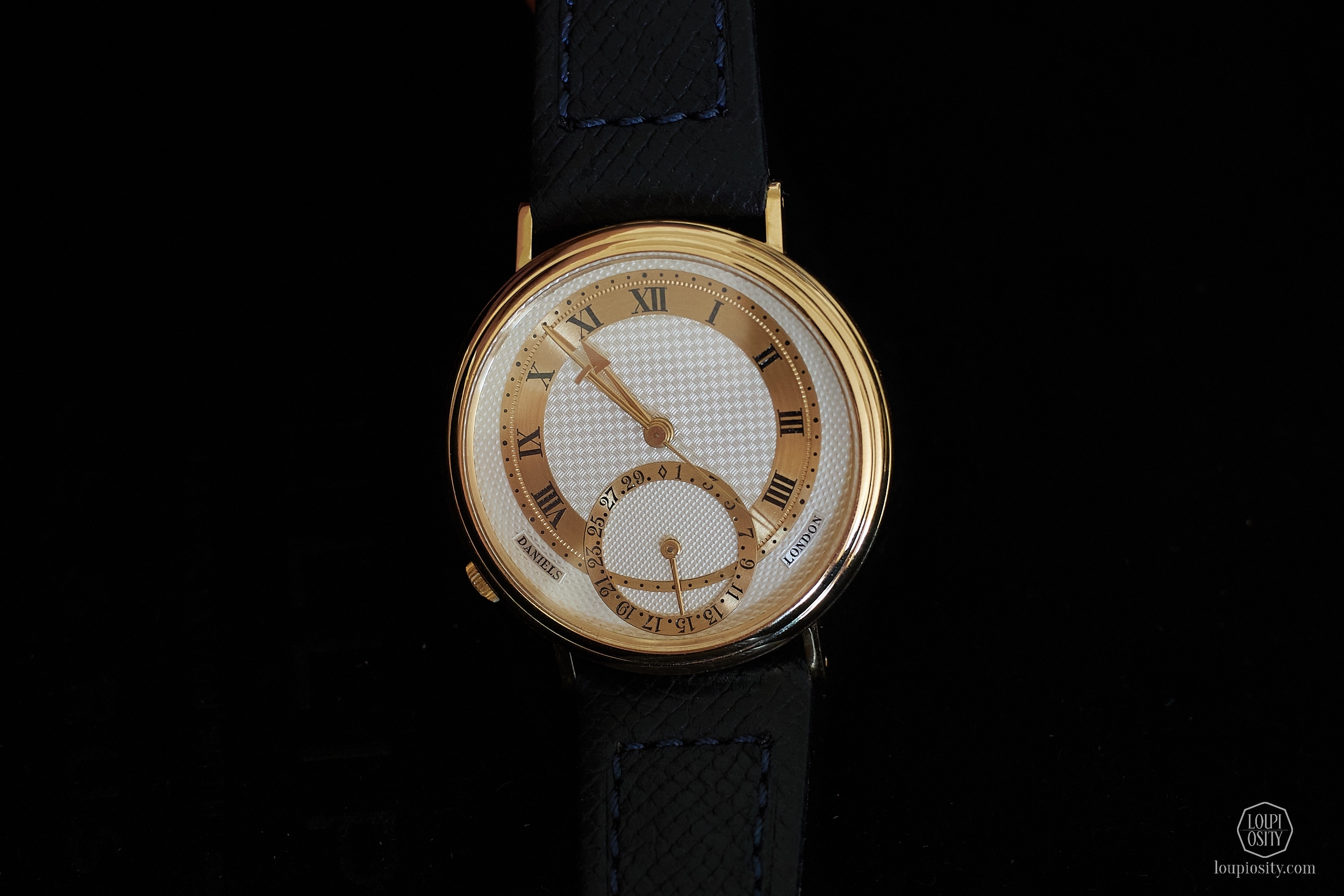 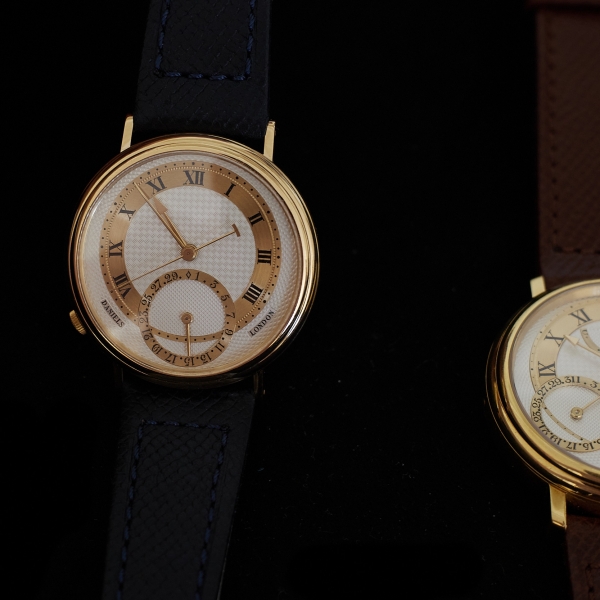 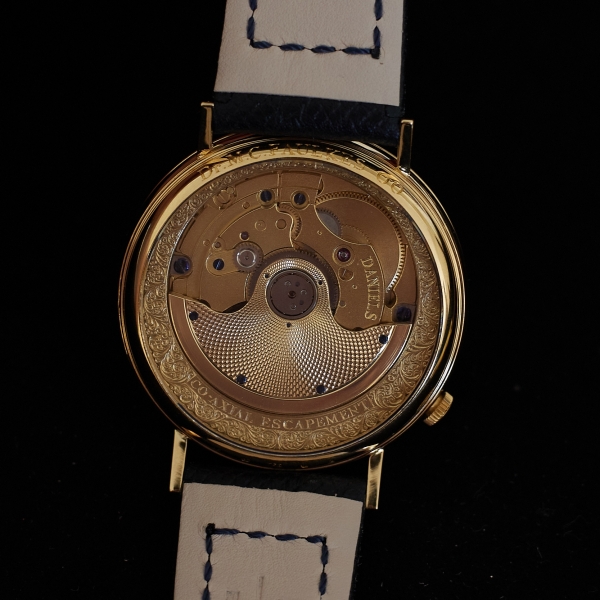 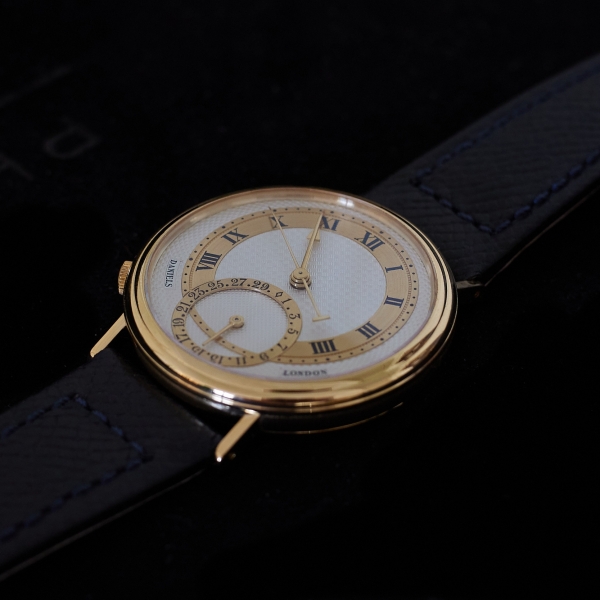 The Great Escape(s) by George Daniels

Escapements make sure that the energy of the mainspring is released in discrete time intervals. The rhythm of release is provided by the oscillator. They also give impulses to the balance wheel this way or another. The mid-to-late 18th century brought many developments in the escapements. Thomas Mudge invented the lever escapement in 1755 which gradually became the de-facto in watches (especially in wristwatches) thanks to its favourable characteristics: it is self-starting, the lever delivers an impulse to the balance in both directions (although asymmetrically) and the lever can unlock accidentally only under extreme conditions. Its weakness is a sliding friction between the lever’s ruby pallets and the escape wheel, for which it requires lubrication. The detent escapement was born later in the 18th century and although it has proven to be highly accurate (it runs on very little friction requiring no oiling), it is not self-starting and is fragile and can unlock at even smaller shocks.

Daniels managed to merge the great characteristics of lever escapements (self-starting, lever safety and delivering impulses to the balance in both directions) and the detent escapement (no sliding friction between the pallets and the escape wheel) by separating the locking function from the impulse. He employed two co-axially situated escape wheels and a lever with three pallets. Two pallets provide the locking on one escape wheel, while the third is receiving an impulse from the second escape wheel, which is transmitted by the lever to the balance. Swinging to the other direction, the balance (through a pallet on the balance) receives a second impulse directly by the turning outer escape wheel. The co-axial escapement is the second mass-produced escapement type beyond the lever escapement today, although in far smaller quantities. Omega (since 1999) and Roger W. Smith (a former student and co-worker of Daniels) are producing timepieces based on Daniels’ principle.

Daniels created other dual escape wheel mechanisms, where instead of sitting on the same axis, they operate next to each other in alternating rhythm thanks to the lever nodding in between. He was inspired by Breguet’s natural escapement from the late 1700s, who despite building these into a number of pocket watches, had mechanical issues with them. Daniel’s natural escapement worked reliably in his Space Traveller I and Space Traveller II pocket watches and was perfected further by Bernhard Lederer a few years ago.

Due to their rarity, every occasion to see George Daniels’ masterpieces is an opportunity not to be missed. When in Zürich, make sure you visit the Beyer Uhrenmuseum, where three of his timepieces are exhibited. In fact, Theodor R. Beyer (the father of the current CEO and 8th generation owner René Beyer) was a usual guest at George Daniels’ workshop on the Isle of Man, and he purchased these exhibited units decades ago. As the legend goes, following a long talk between the two in Daniels’ house in 1989, he handed over ‘The Beyer II’ Minute-Tourbillon pocket watch in his handkerchief. The watch incorporates Daniels’ co-axial escapement. By that time Theodor Beyer already had ‘The Beyer’ in his possession since 1979, which incorporates a large free-sprung balance wheel and the twin escapement wheels described above. The third Daniels piece in the Beyer collection is a beautiful example of the ‘Millennium’ pieces, acquired in 2000.

We thank the Beyer Uhrenmuseum for their hospitality!

If you would like to learn more about George Daniels, Beyer published recently a great article about him in their customer magazine, please check out here (in German). 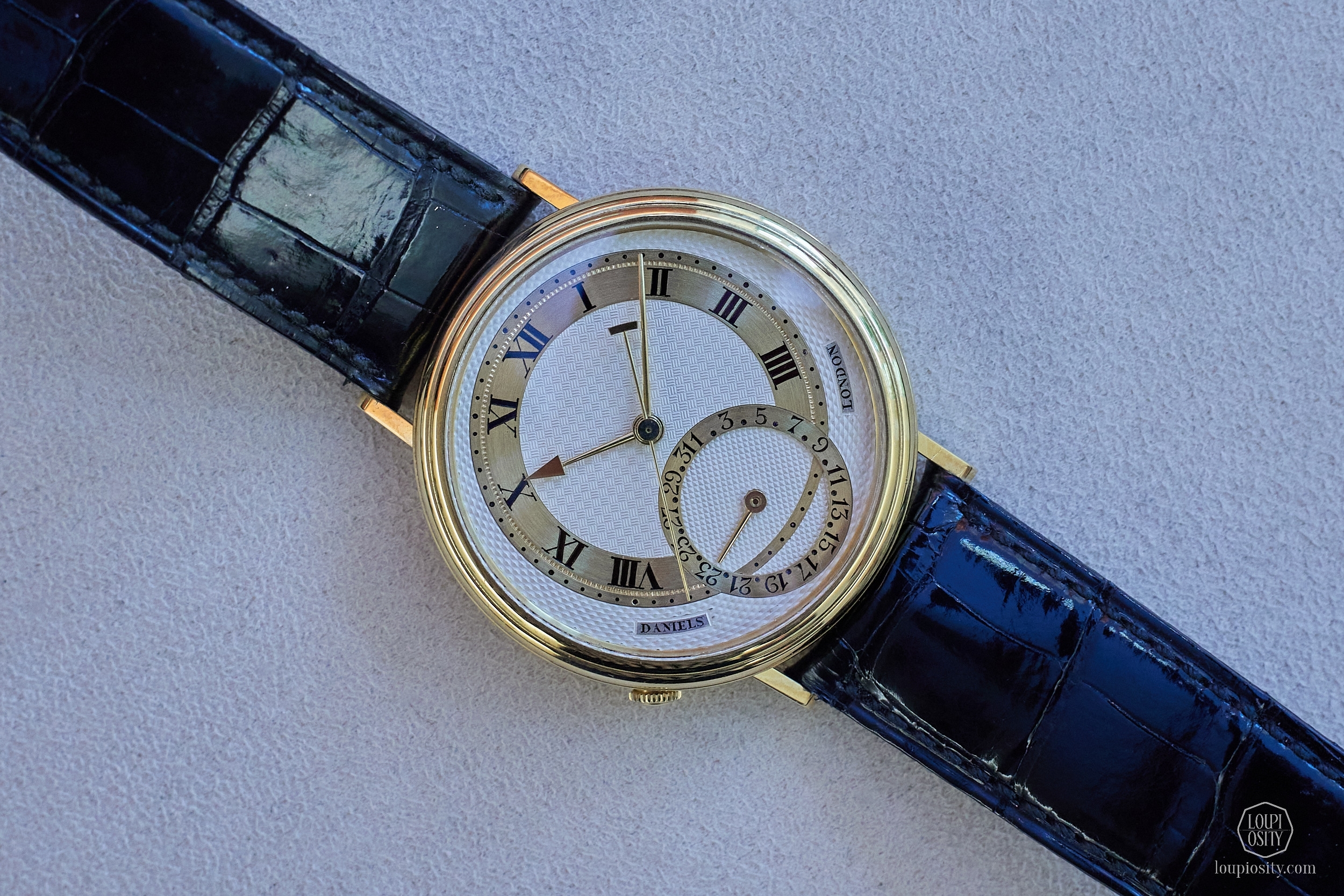 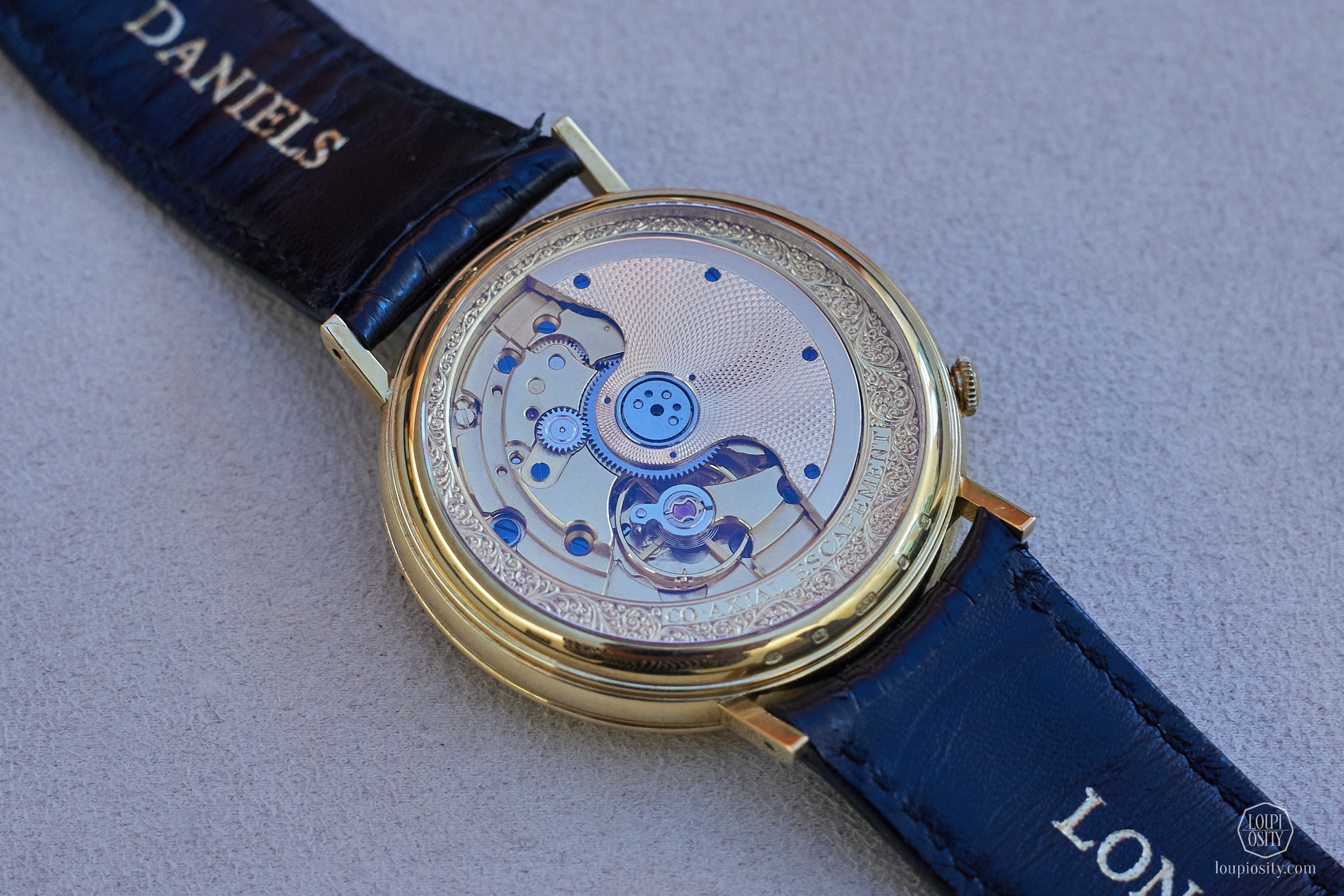 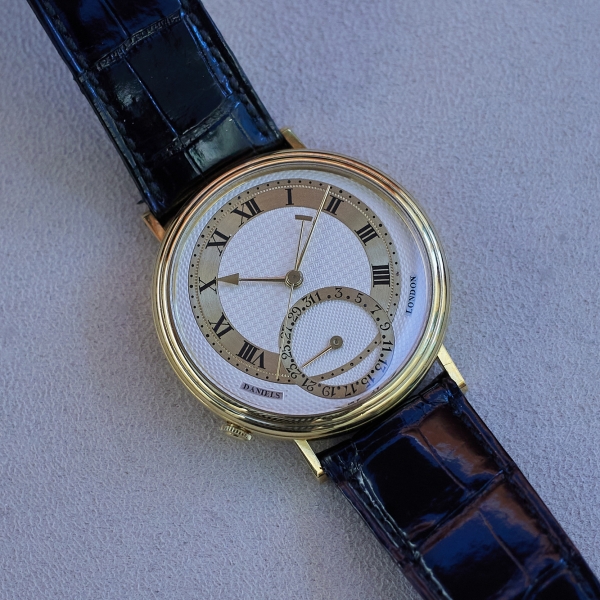 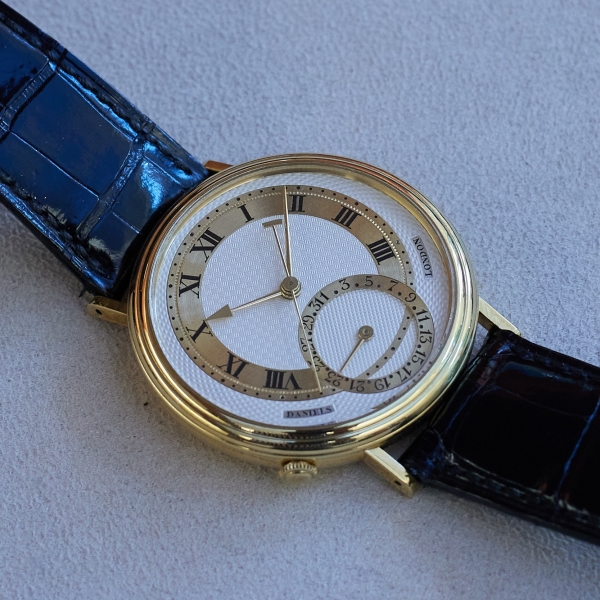 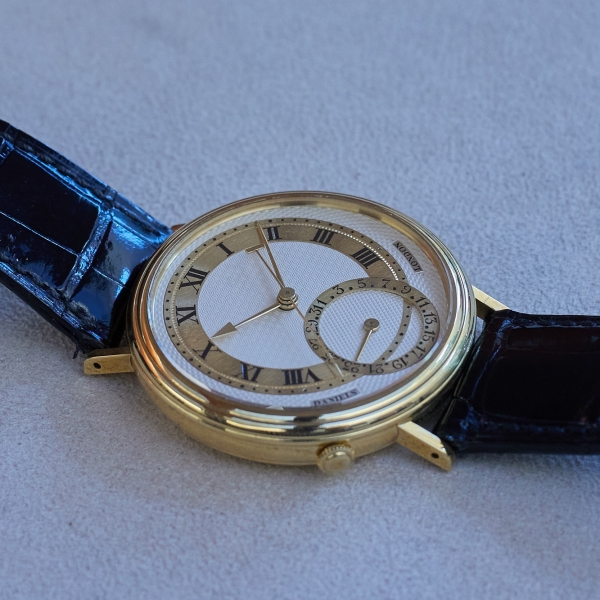 Phillips - The Geneva Sessions Besides the brands, the watch department at Phillips auction house also showcased some of the world's finest collectors' watches at the Geneva Watch Days.Bernhard Lederer Central Impulse Chronometer One of the most pleasant meetings at the Geneva Watch Days revealed one of the most exciting horological masterpieces introduced at the event. Bernhard Lederer showed us his Central Impulse Chronometer at the Beau Rivage Hotel.Zenith x Phillips - The Zenith El Primero One-Off In… In 2019, Zenith celebrates the birth of its star, the El Primero movement. Lot 136 at the Geneva Watch Auction X is a special anniversary piece, co-designed with Phillips Watches in Association with Bacs and Russo with attributes never found on Zenith watches. The sale supports the NGO Zoé4life.