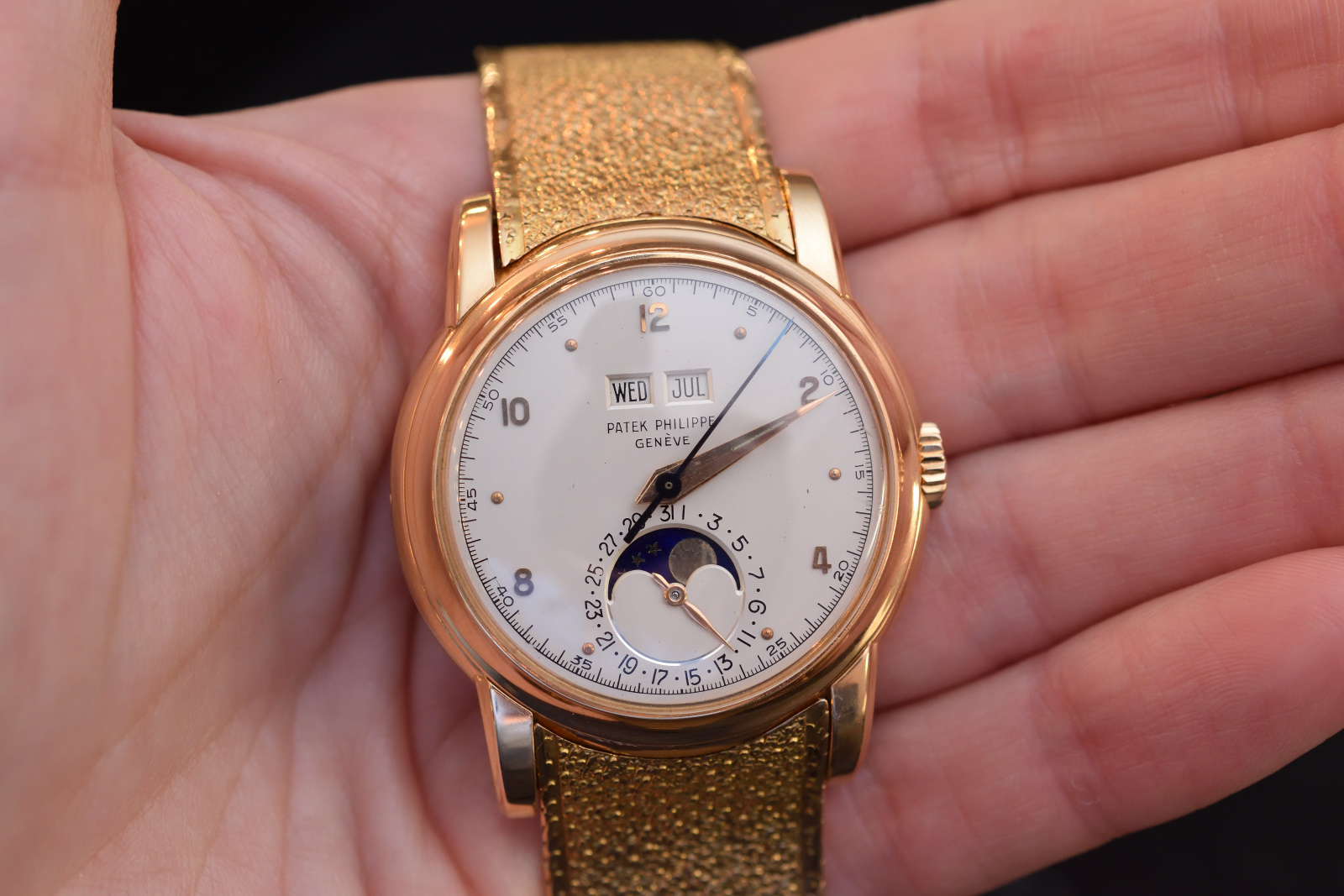 Already customary and awaited, this spring Phillips – in association with Bacs & Russo – gathers the crowd again to Geneva for their spring sale of collectible pieces. Geneva Watch Auction 5 (GWA5) takes place at Hôtel La Réserve in a double evening show by Aurel Bacs on Saturday and Sunday, 13 and 14 May.

Hard as it may sound, we selected a few examples, which have moved us in particular. The following articles are dedicated to them.

Cartier, Omega and Patek Phillipe are frequent names called out during Phillips auctions. We selected four from their fine mechanical artworks offered at GWA5.

The 170-year long history of Cartier is rather complex and interesting. The House has given a number of iconic models to aficionados by pioneering shapes and techniques in jewellery and watchmaking.

A golden period of Cartier was the first decades of the 20th century, the hey-days of Art Deco. The movement influenced not only architecture and the arts, but embodied a new kind of wellbeing and luxury in addition to driving technological and social progress. Cartier embraced the new style and created designs for the new female ideal: liberated from the constraints of corsets and looking for comfort. Astonishing bracelets, headbands and sautoirs (long necklaces with tassels or other ornaments) and timepieces left the ateliers of the manufacture. Lot 219 represents the inexhaustible creativity of Cartier in this period and Lot 220 gives a glimpse to the artistic directions of the post-war years.

The model called “Nain Jaune” is from circa 1920 and it is a white gold timepiece. With its 30mm size it was designed for bold women. It stood out among its contemporaries as most brands created smaller pieces for slim wrists.

The shape of the watch is an octagonal star, inspired by a French card game, “Le Jeu Du Nain Jaune” (Game of the Yellow Dwarf – it is a traditional game that strikes a balance between luck and genuine strategy). The star case is made of two squares alternating black onyx and white dial, circled by diamonds. Its white and yellow gold folding deployant clasp is equally set with diamonds and onyx. This great evening watch is completed with a black satin strap. 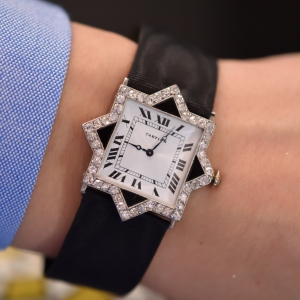 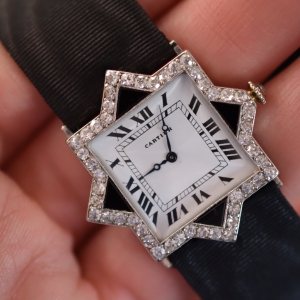 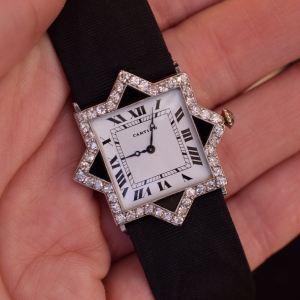 Besides the very famous watch models like the Santos, the Tank, the Tonneau or the Crash, Cartier has created many other models, too. An interesting model, commonly known as the ‘Helm’ takes its name from the distinctive form of the bezel, shaped like a ship’s steering wheel.

The Helm watches have examples from the 30’s in different variations either as wristwatches (including dress watches) or pocket watches but always in extremely limited numbers. Cartier created a special Vendôme bracelet (patented in 1933 – with a system of central attachments for the strap) for the watch.

One of the most famous examples of the Helm is part of Cartier’s private collection, having previously belonged to the Maharaja of Kapurthala (the maharajas of Kapurthala and Patiala were prized clients of Cartier, ordering uniquely designed pieces of jewellery and watches).

Examples of Helm timepieces are very rare and it is even rarer to find museum quality pieces like the present lot. 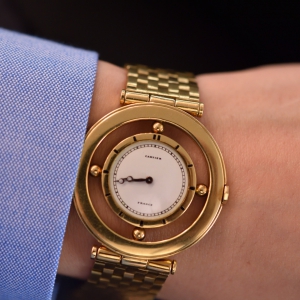 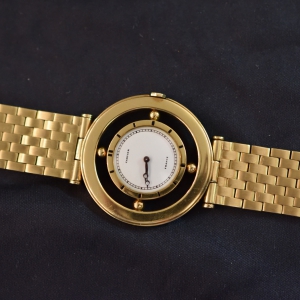 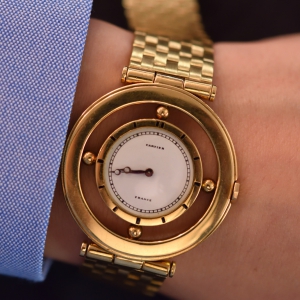 Up until 1967, the unit of a second was defined by observing the rotation of the Earth. Therefore, astronomic observatories have not only scanned the sky for the extra-terrestrial, but they also determined time on Earth. As a side-effect these institutes also tested how accurately timekeeping mechanisms perform. The Geneva Observatory – located at the site of Sauverny, town of Versoix, in the Canton of Geneva – also participated in rating Swiss timepiece movements for accuracy.

The Omega “Observatoire” commemorates these tests and the brand’s greatest chronometric achievements at the world’s observatories. The backside of the watch is engraved with the cupola of the Geneva Observatory surrounded by eight stars representing these results. More about these achievements here.

This 34mm yellow gold wristwatch from 1954 has a special cloisonné enamel dial depicting the sky and the cupola of the Geneva Observatory. The dial was made by Stern Frères as confirmed in their registers. Since the establishment of Stern Frères in 1898, it has become one of the essential suppliers of watch components such as lacquered, enamelled, precious metal and jewellery dials.

Champlevé and cloisonné are two similar enamel techniques. The moist powder enamel is applied to the engraved patterned metal surface, thus the enamel seeps into the patterns, and it is then fired. During the creation of the base metal pattern, extremely high quality requirements have to be met, because even the smallest unevenness can prevent the appropriate binding of the enamel. When the surface has cooled, it is polished with very fine sandpaper. The un-carved portions of the original surface remain visible as a frame for the colourful enamel designs. In the cloisonné technique there are small wires added on top of the metal to create the enamel compartments.

The present timepiece was made for a special order of a Middle Eastern client. 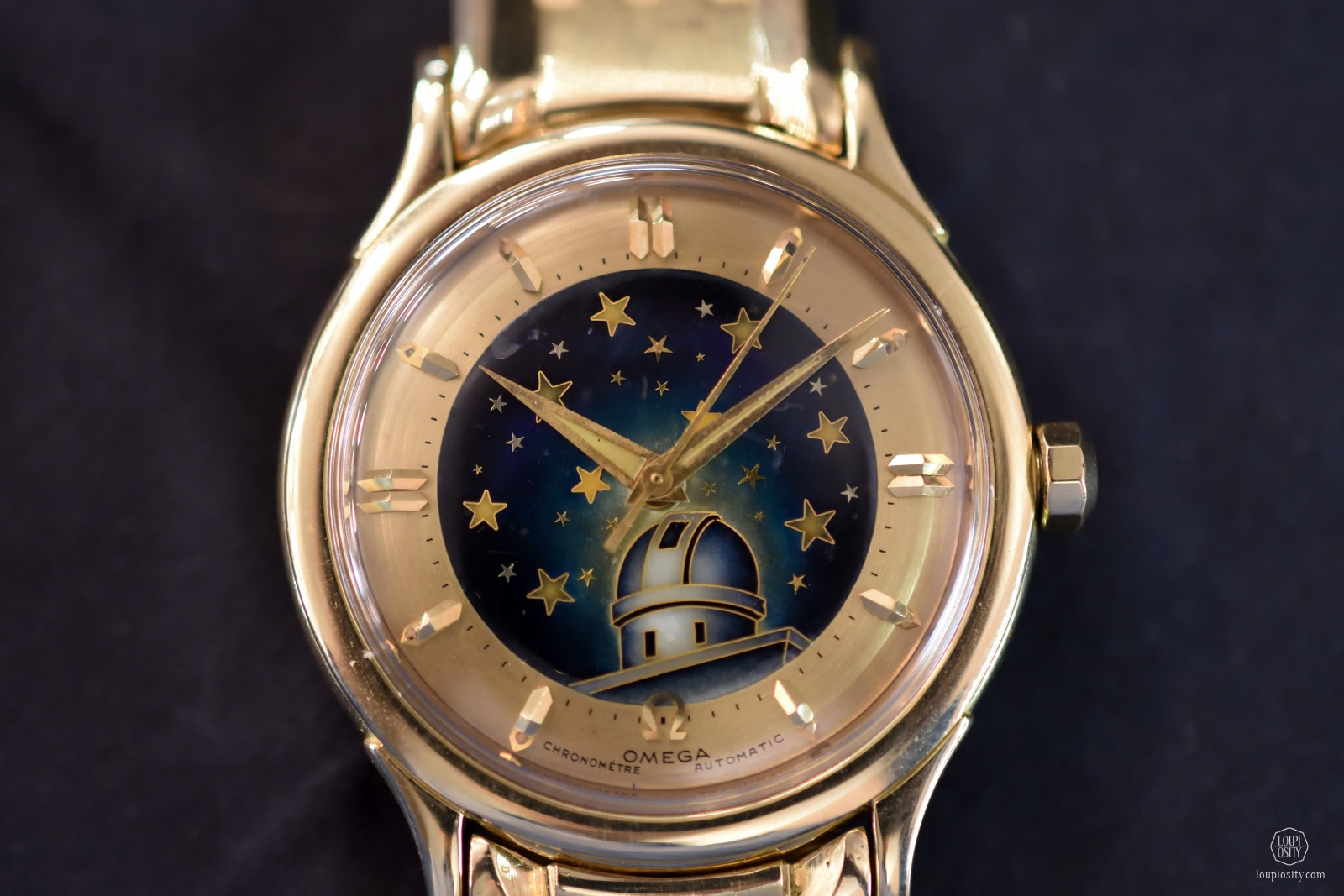 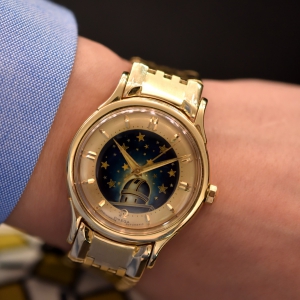 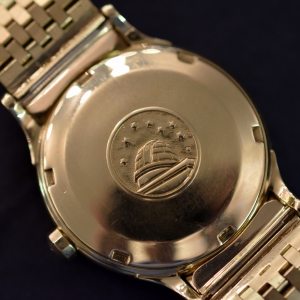 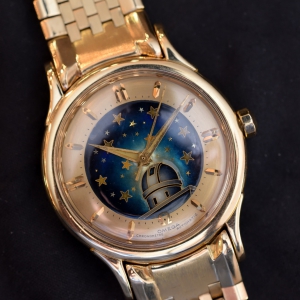 Patek Philippe introduced the reference 2497 in 1951, as the manufacture’s first serially produced perpetual calendar wristwatch to feature centre seconds. (A beautiful unit of its younger and water resistant sister, the ref. 2438/1 was auctioned by Phillips two years ago). Until 1963 only 179 were made, and of those, only approximately 20 are known to have been made in pink gold.

The 2497 is divided into two basic series, with two different dial designs. One is fitted with Arabic and dot raised hour markers, like this example and a lot from a previous Phillips auction. Other models produced later featured faceted, baton hour markers, applied gold baton numerals and gold dauphine hands, such as the examples auctioned by Sotheby’s and Christie’s.

The symmetry, the balance of space and curves make this watch elegant and highly attractive – a model that is especially revered by collectors.

The case was produced by Wenger, recognizable by the rounded case-back, shorter claw-shaped lugs and the larger diameter. Wenger has produced cases for a number of Patek Philippe units – at the GWA4 last year, Phillips sold a reference 2499 also with a Wenger case.

The present reference 2497 lot, made in 1954, remained unsold for six years. To make it more aligned with the style of the 60’s Patek Philippe made modifications to it by adding a gold Milanese woven bracelet, and replacing the original “feuille” hands with dagger shaped luminous hands (probably the only reference 2497 with luminous hands).

An Australian gentleman (the father of the current owner) purchased the watch in 1960. From the early 1970s it was in a safe, never to be worn again which explains the almost untouched condition. After almost 60 years the “Sydney Rose” came back to Geneva, to be auctioned at Phillips.

It’s not too often we get to see so many rare vintage timepieces at once – click to discover two fantastic Rolex 6062’s and a set of Vacheron Constantin wrist and pocket watches from Phillips’ GWA5. 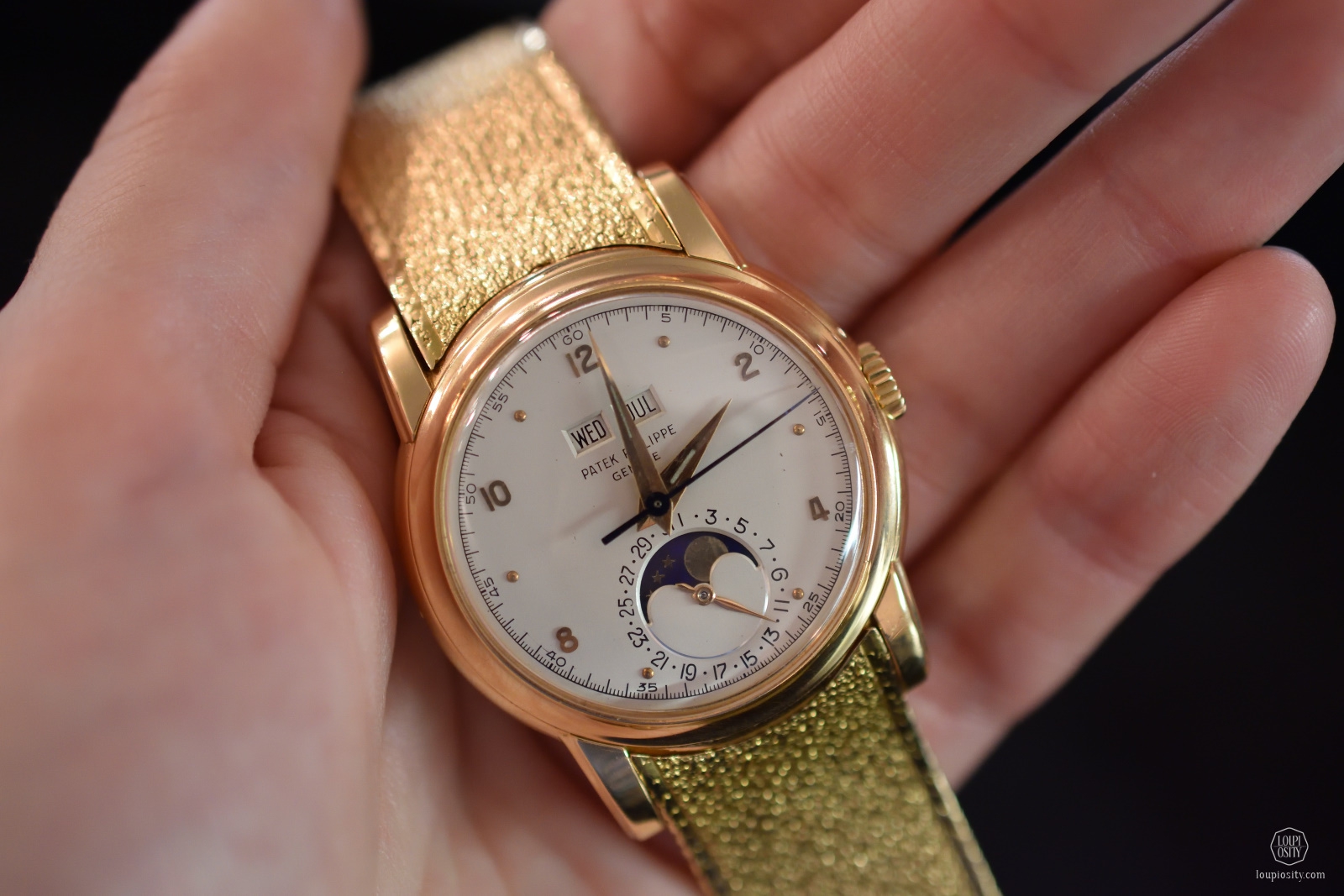 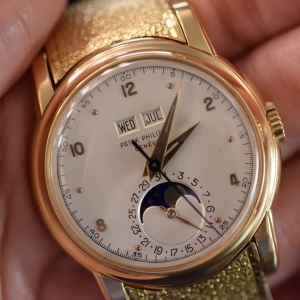 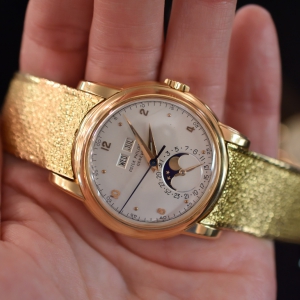 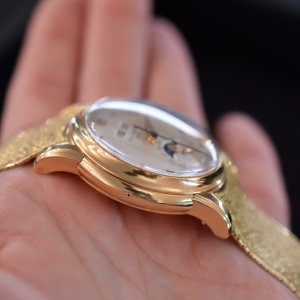 Phillips - The Geneva Sessions Besides the brands, the watch department at Phillips auction house also showcased some of the world's finest collectors' watches at the Geneva Watch Days.Game Changers - Phillips Watches Phillips' Game Changers auction will be held in New York with iconic timepieces from equally iconic individuals. We previewed the two highlights of the sale in Geneva.George Daniels timepieces at the Phillips GWA XVI The late summer Geneva Watch Days gave Phillips Watches an excellent opportunity to showcase some of the world’s finest collectors’ watches to be auctioned this Autumn. The batch includes three fantastic examples by George Daniels.