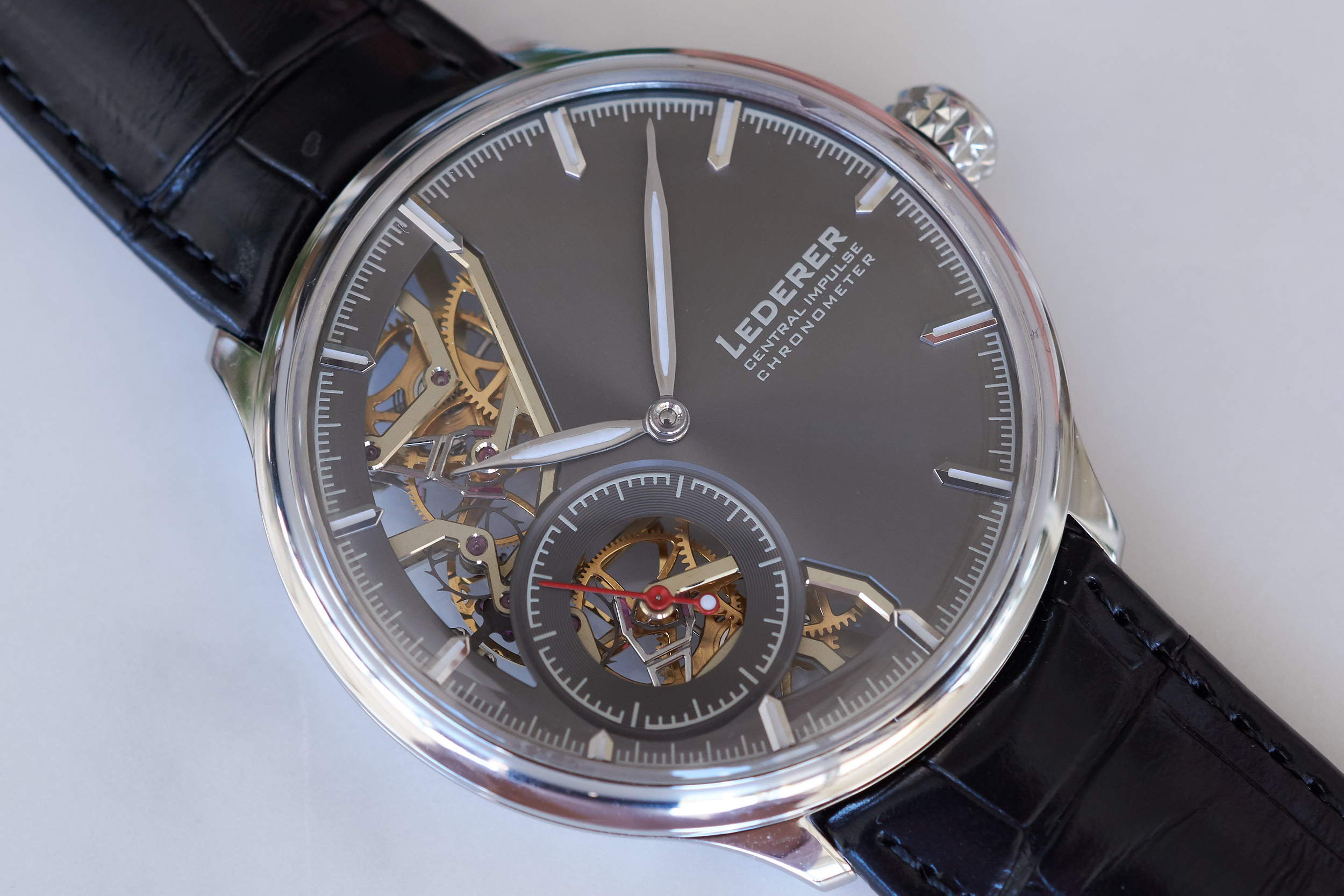 One of the most pleasant meetings at the Geneva Watch Days revealed one of the most exciting horological masterpieces introduced at the event. Bernhard Lederer showed us his Central Impulse Chronometer at the Beau Rivage Hotel.

The format of the Geneva Watch Days was chosen in response to the pandemic. Although it enabled social distancing by being spread out across hotel suites and boutiques and eliminating the formation of crowds, the 1:1 meetings created some mental intimacy. If you wanted (and most people did), you could exercise responsible behaviour while getting engaged in surprisingly candid and warm discussions. As if 2020’s top challenge brought out a kind of understanding and camaraderie, which was unusual in the past few years.

One of our most memorable encounters was with Bernhard Lederer and his wife and business partner Ewa Lederer at the Beau Rivage Hotel. A member of the AHCI (Académie Horlogère des Créateurs Indépendants) since its inception in 1985, Mr. Lederer has been behind the watchmaking bench for more than 40 years. Having not met him before I expected a serious watchmaker who would tell us all the ‘must knows’ about his showcased piece with a reasonable sense of duty in half an hour. Instead, he opened with a smile longer than a mainspring and took our hands and led us behind the sapphire case back with an enthusiasm rarely seen. We adventured together for over an hour.

‘Following my previous brand BLU (Bernhard Lederer Universe) I focused on developments for 3rd parties under MHM SA Manufacture de Haute Horlogerie et Micromécanique. I love designing, creating prototypes and seeing when they first start beating’ – he says. He built up a team of 20 and acquired a variety of tools and the business has been going very well. ‘MHM also gave me the opportunity to pursue an idea of mine: to create a series of 8 timepieces with different escapements. The present Central Impulse Chronometer is the first in the ‘Tribute to the Masters of Escapements’ collection with a natural escapement. I developed George Daniels’ further who had walked the path in the late 1970s and early 80s Breguet laid out.’

The Bernard Lederer Central Impulse Chronometer is a manually wound dual gear train timepiece with a barrel and a 10-second remontoir d’egalité constant force mechanism each. 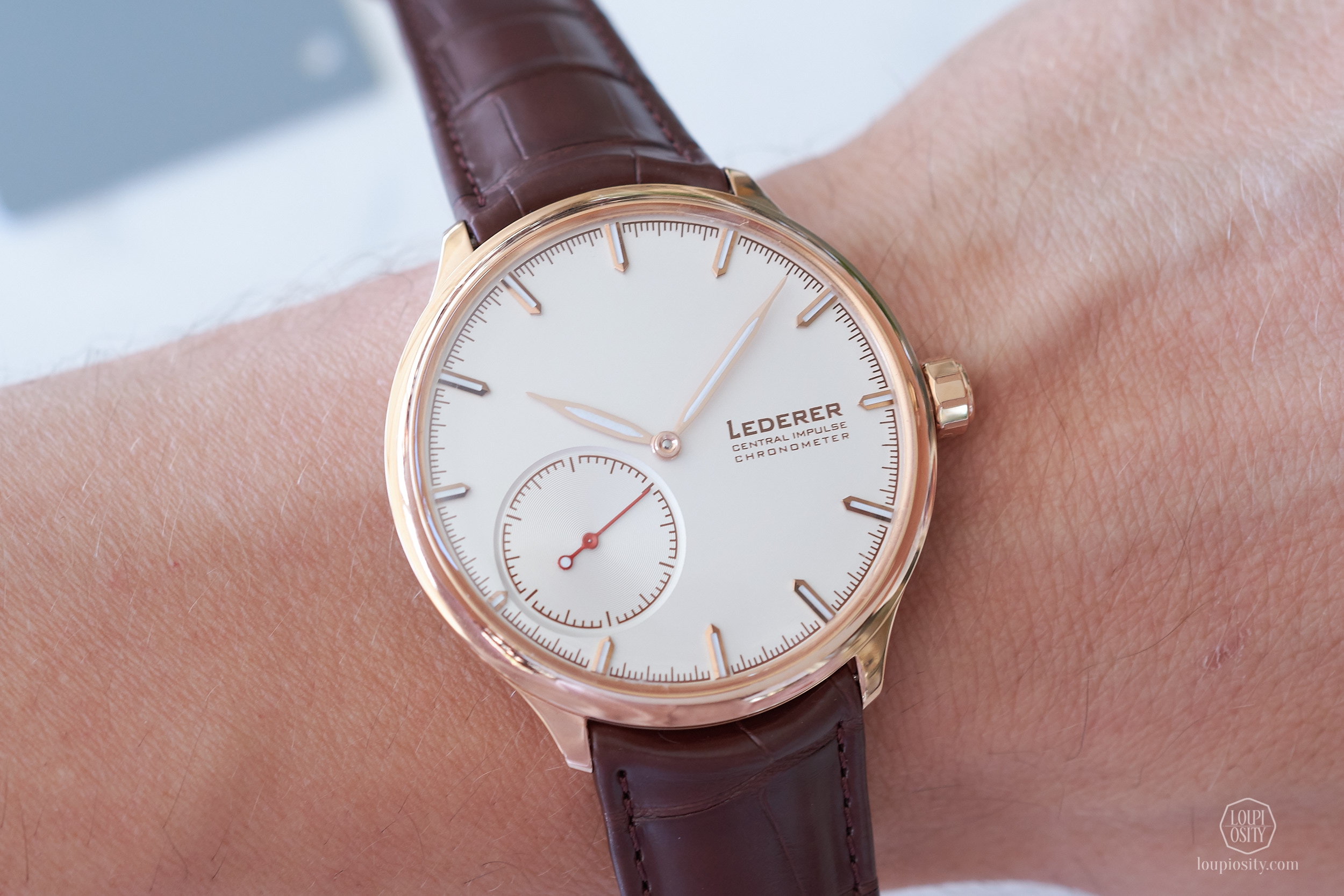 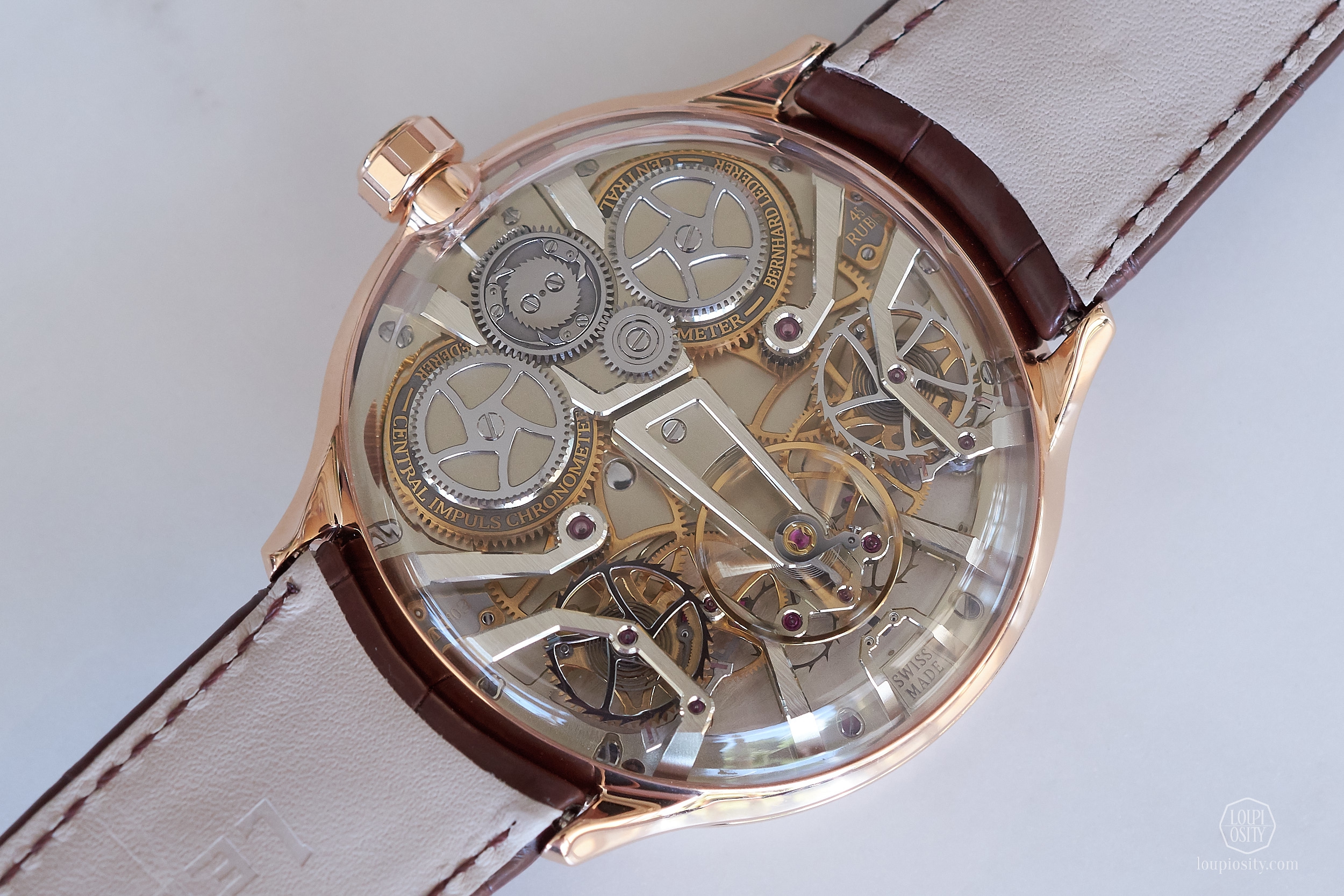 The escapement is the device which makes sure that the energy of the mainspring is released consistently in discreet time intervals. It typically contains an oscillating mass (balance or pendulum) and an escape wheel. The escape wheel is in contact with the source of the energy (mainspring) through the gear train and therefore it is under constant tension. An anchor stops it from a free rotation, the other end of which contacts the balance. The balance (wheel and hairspring) is a harmonic oscillator which means that if displaced from its equilibrium position it experiences a restoring force proportional to the displacement. As it moves back and forth, it moves the anchor. Thanks to the angled shape of the escape wheel cogs and the anchor pallet, the anchor gives the released tension from the escape wheel as an impulse back to the balance. So as long as there’s tension on the escape wheel the balance gets the energy resupply to oscillate at a constant rate and amplitude.

There are a number of escapements with various characteristics. Some are great in clocks but used less in wristwatches. Some have a complex structure and are harder to produce but offer less friction in return. Again others boast an unbeatable price / performance ratio. All in all, the criteria of the ideal escapement is zero friction (no oiling), no accidental unlocks of the escape wheel and perfect impulse transmission (direct and gentle at the right time).

In 1789 Breguet came up with a new design with two escape wheels in order to reduce the need of oiling. He incorporated it in a number of pocket watches but had issues with it, which George Daniels overcame in the late 1970s. He designed an anchor between the two escape wheels operating in alternation with a one-of-a-kind profile. His escapement worked reliably in his Space Traveller I and Space Traveller II pocket watches.

With his calibre 9012 Bernhard Lederer pays homage to the fathers of the natural escapement by further perfecting the regulating organ. ‘There is a certain backlash of the escapement wheel when it gives the impulse to the balance. I invested in a slow-motion camera what Daniels and Breguet obviously did not have and started to observe what’s happening between the wheel and the balance. I found that the impulse is not given in the most optimal time – it is more of a hit in the last minute than a push over a longer course of joint travelling. Therefore, I studied the shape of the pallets on the anchor and the angle between the receivers co-axial on the 3 Hz balance wheel. With a new pallet shape on the anchor, I changed the way the pallet guides the wheel. By increasing the angle between the receiving pallets to 100 degrees, they enter the impact zone later, and therefore instead of hitting them at the end, the escape wheel pushes them gently but firmly much earlier.’ 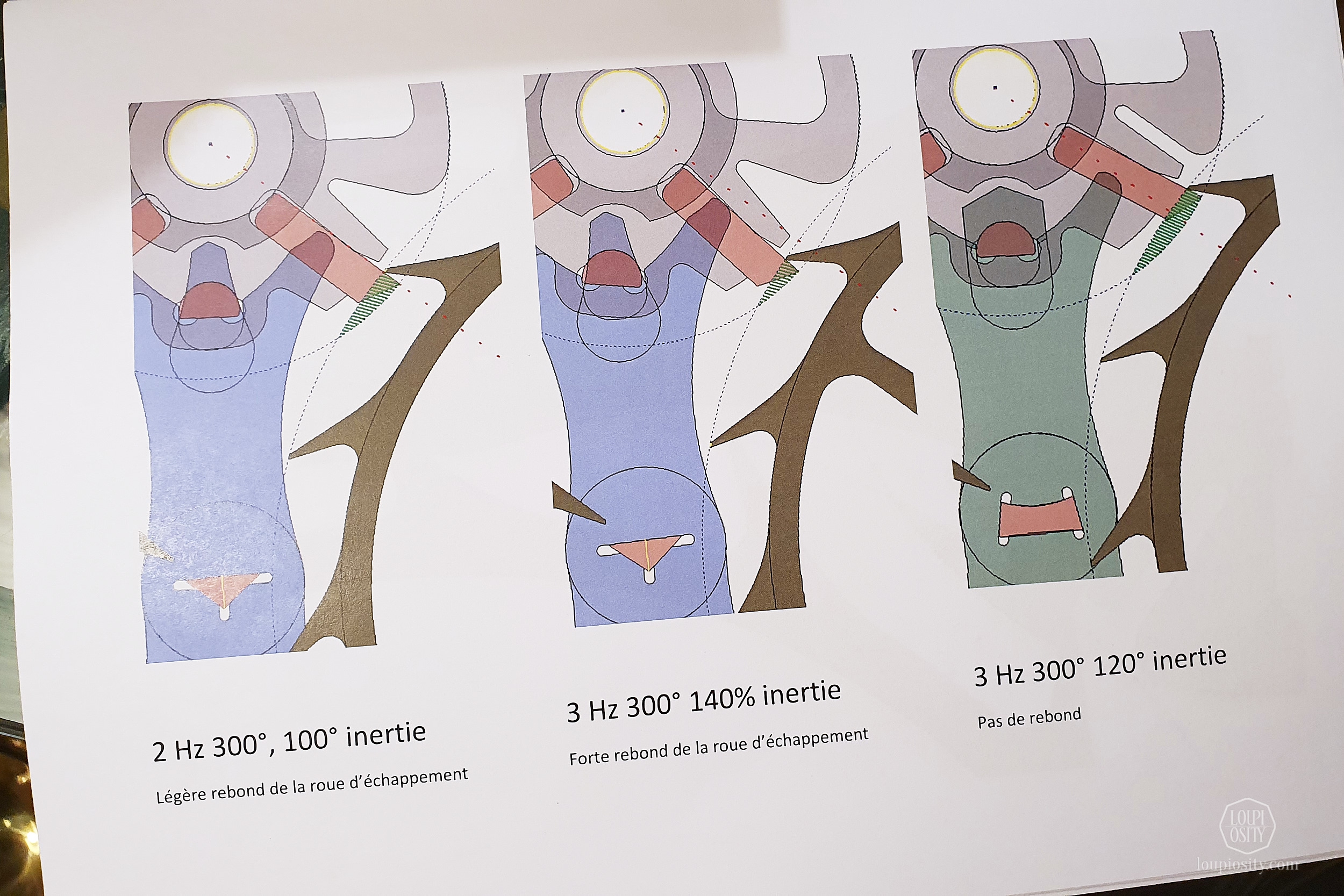 As the mainspring loses tension, the torque is getting lower. This results in weaker impulses on the balance wheel and thus lower amplitudes and eventually a loss of accuracy. In order to make sure there is constant force on the escape wheel, John Harrison invented the spring remontoir for his marine chronometers. In the Central Impulse Chronometer Bernhard Lederer installed one remontoir on both gear trains. Their tiny springs are wound from the respective barrels through the gear train in every 10 seconds but in an alternating rhythm – in every 5 seconds one of the remontoirs is wound.

In order to improve isochronism even more, Bernhard Lederer used titanium for the movement components instead of steel. This metal is lighter, stiffer and with a lower inertia, they are quick to restart and much more energy-efficient.

The beautiful Calibre 9012 came in two very restrained looks. One in an 18k rose gold case and a minimalist dial with a small seconds indicator at 8 o’clock and another in 18k white gold and a partially open-worked slate-grey dial. You can admire the quiet operation of one of the remontoires and the escapement.

The metal of the case is very thin, leaving the entire bottom available for a domed sapphire crystal. The slim case makes you feel that the watch is thinner too, but what’s even better, it gives the impression that the timepiece is floating on your wrist.

The diameter of both versions is 44 mm and the thickness is 12.2 mm. 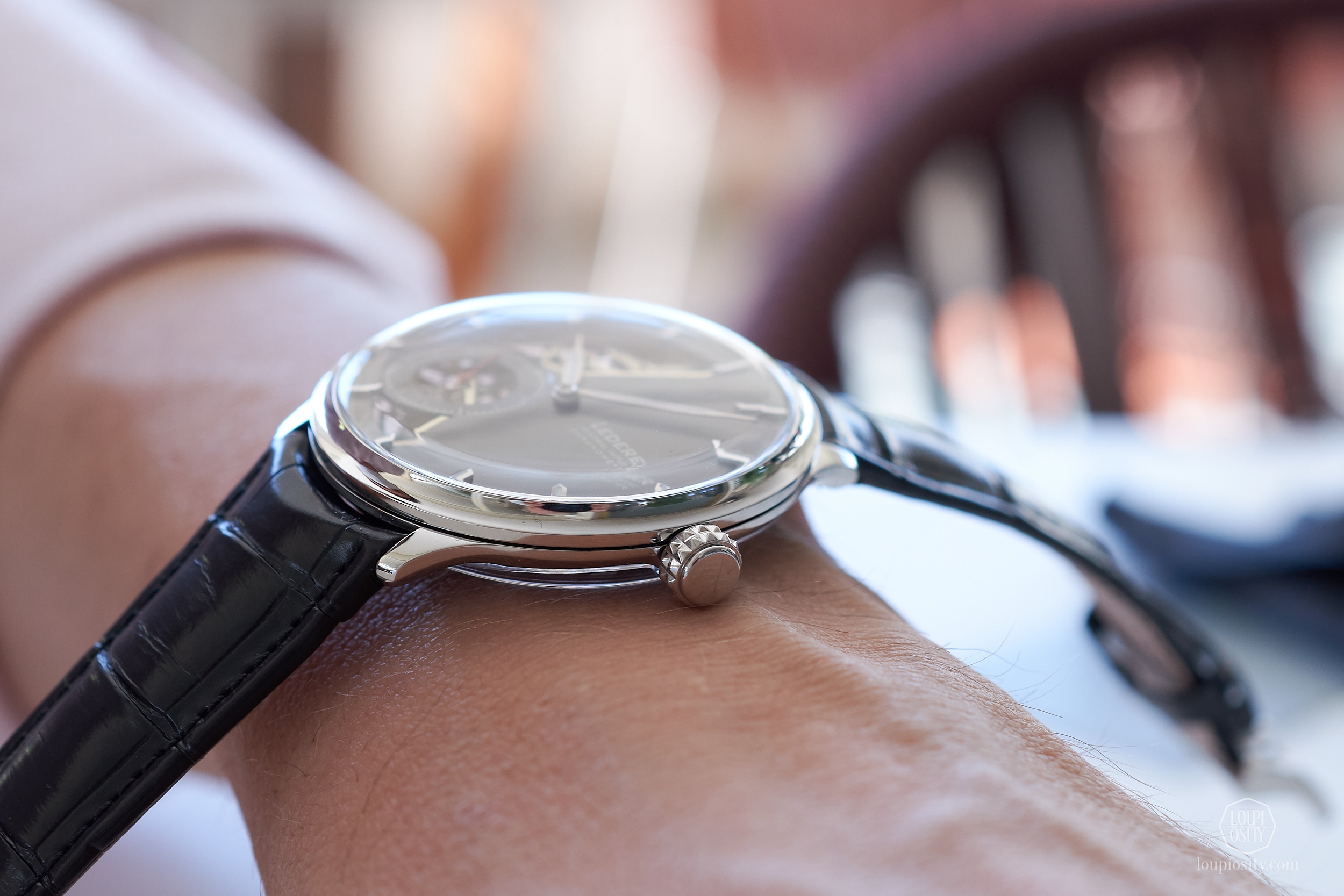 The Central Impulse Chronometer is the initial member of the ‘Tribute to the Masters of Escapements’ collection. We wish great success for this astonishing piece and the creator and look forward to seeing the add-ons to the collection. 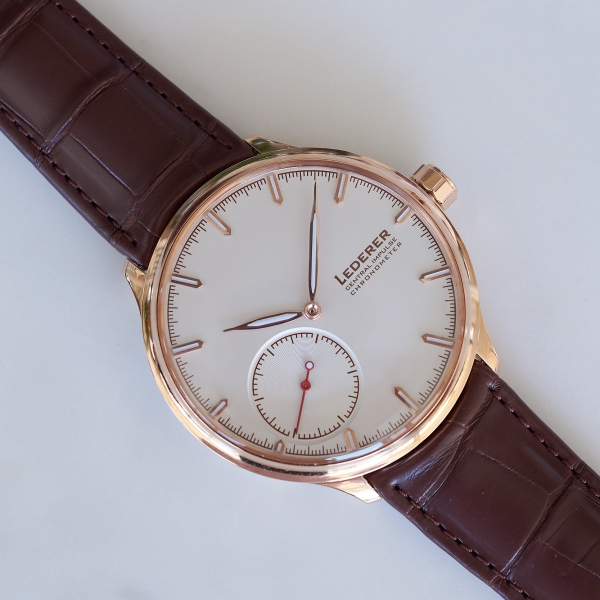 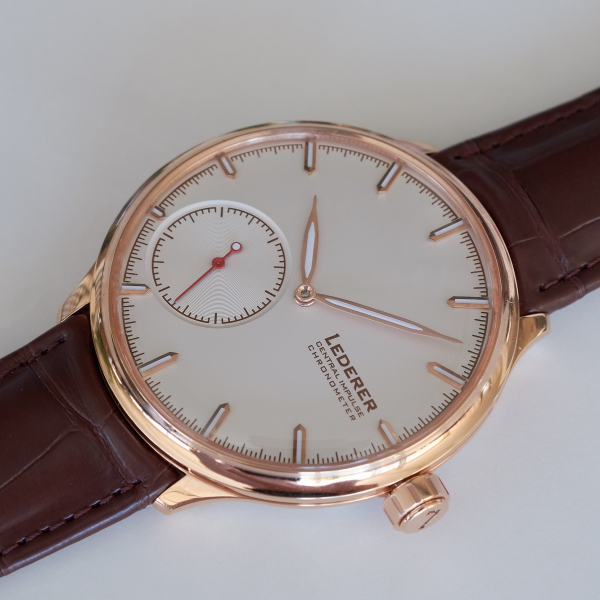 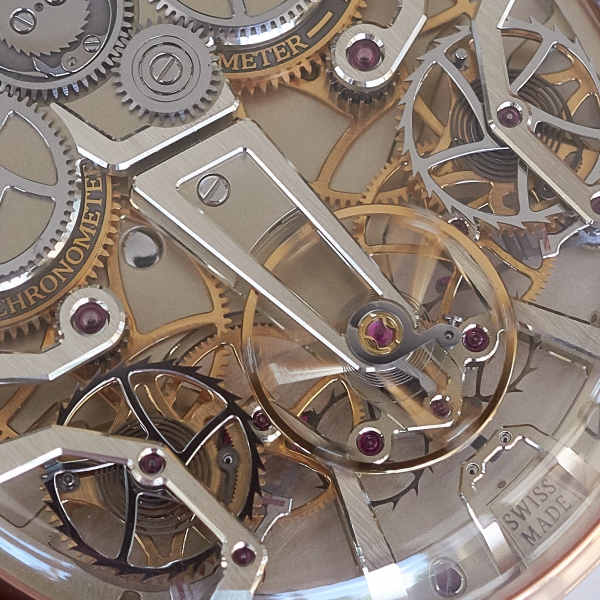 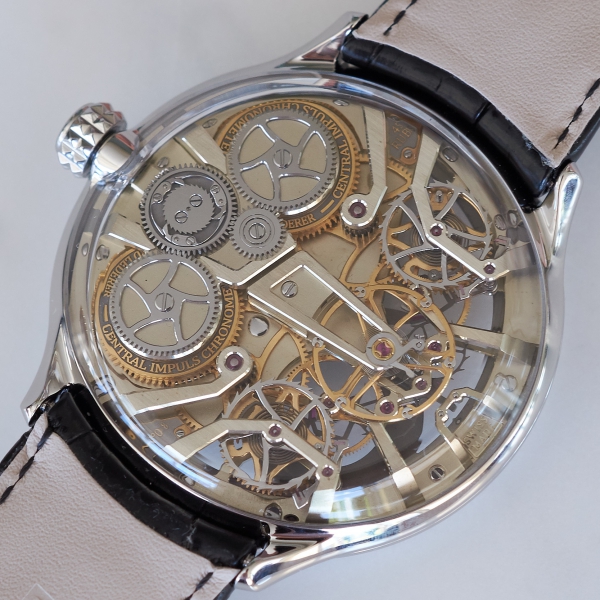 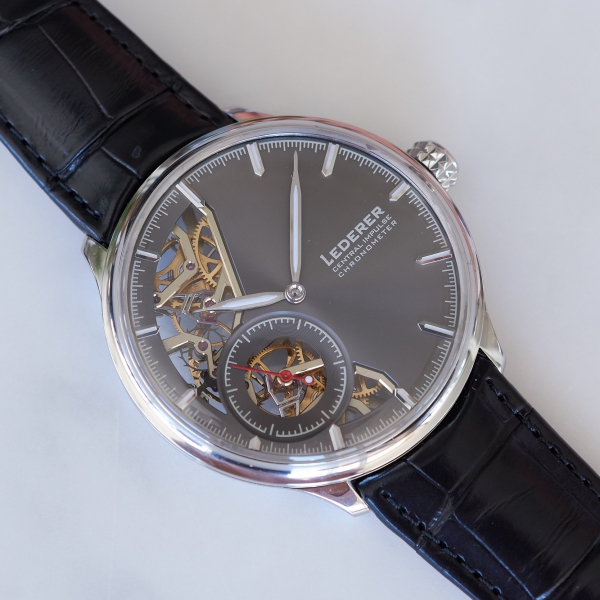 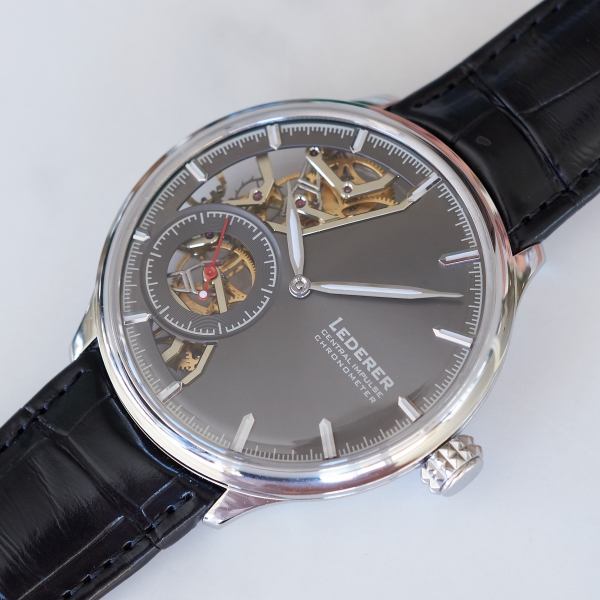 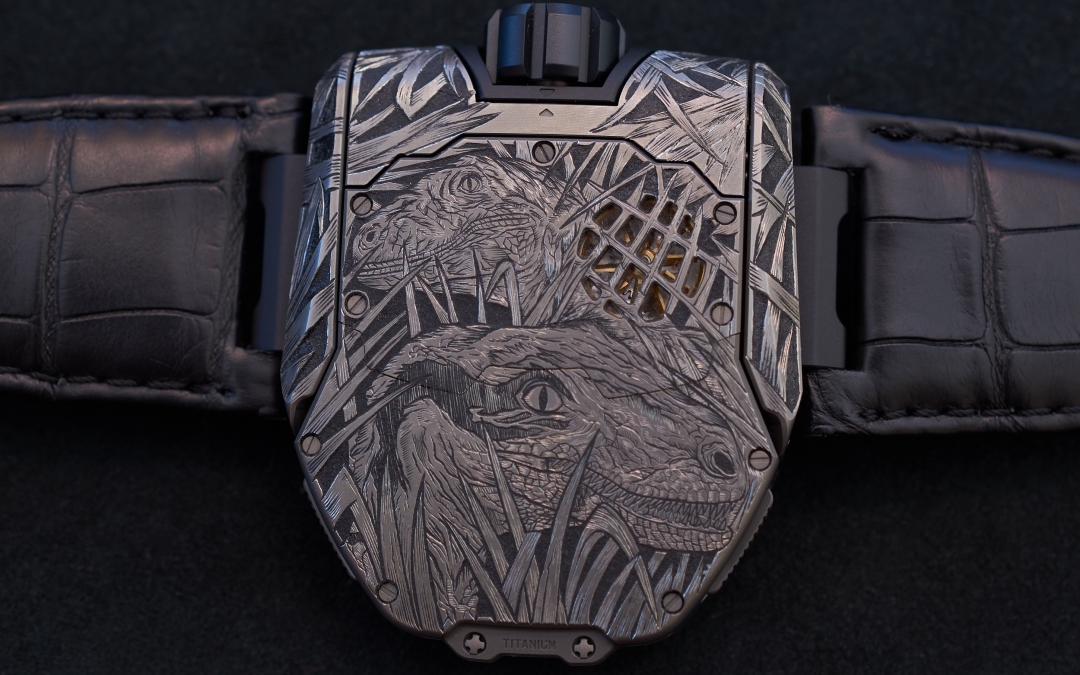 URWERK - Geneva Watch Days For the Geneva Watch Days, URWERK set up in a beautiful suite with a lakeside view at the Beau-Rivage to introduce their latest novelties. We saw the unique UR-T8 Raptor piece and the EMC Time Hunter Desert Sage. 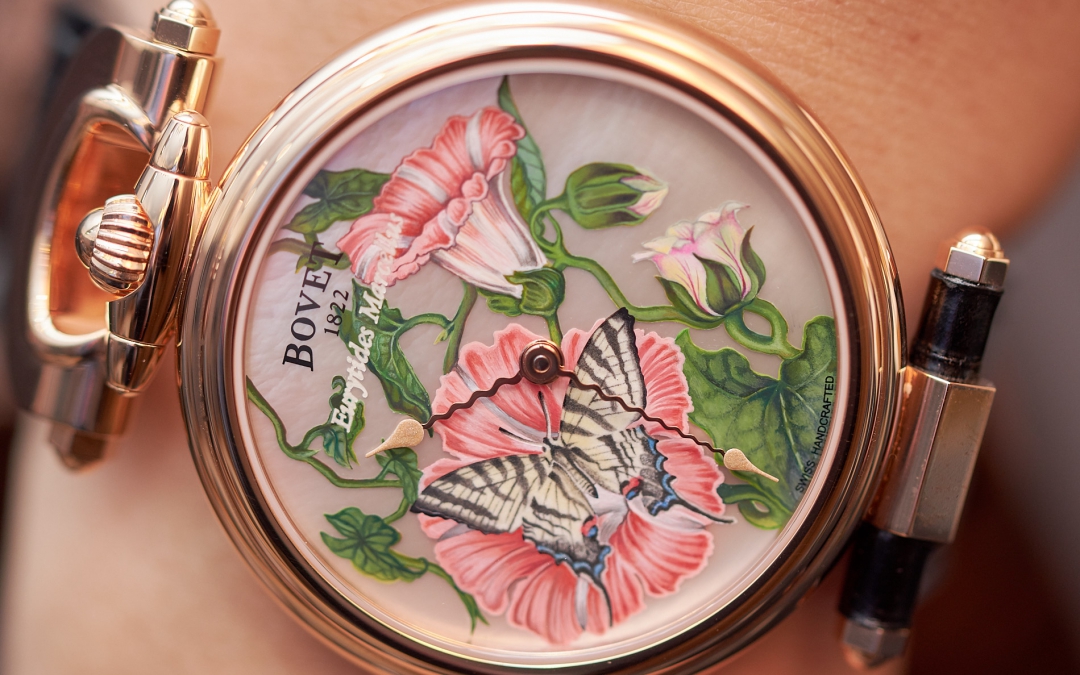 Fans and butterflies In 2018, Bovet Fleurier introduced impressive technical models and breathtaking artistic pieces. In this article we will focus on the unique astonishing miniatures. 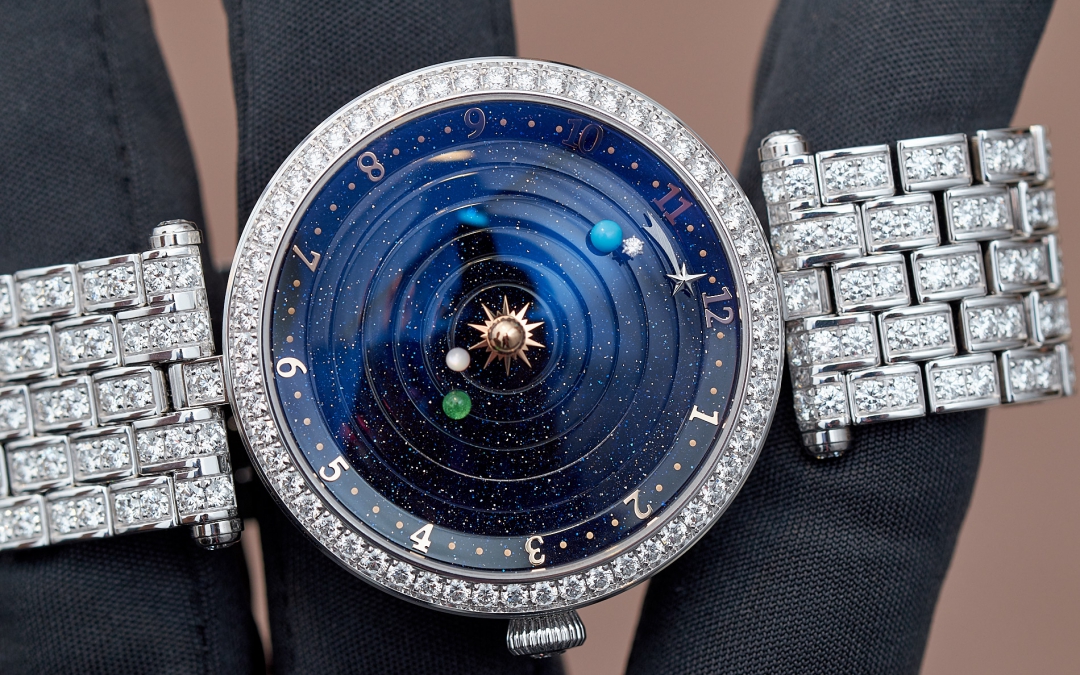