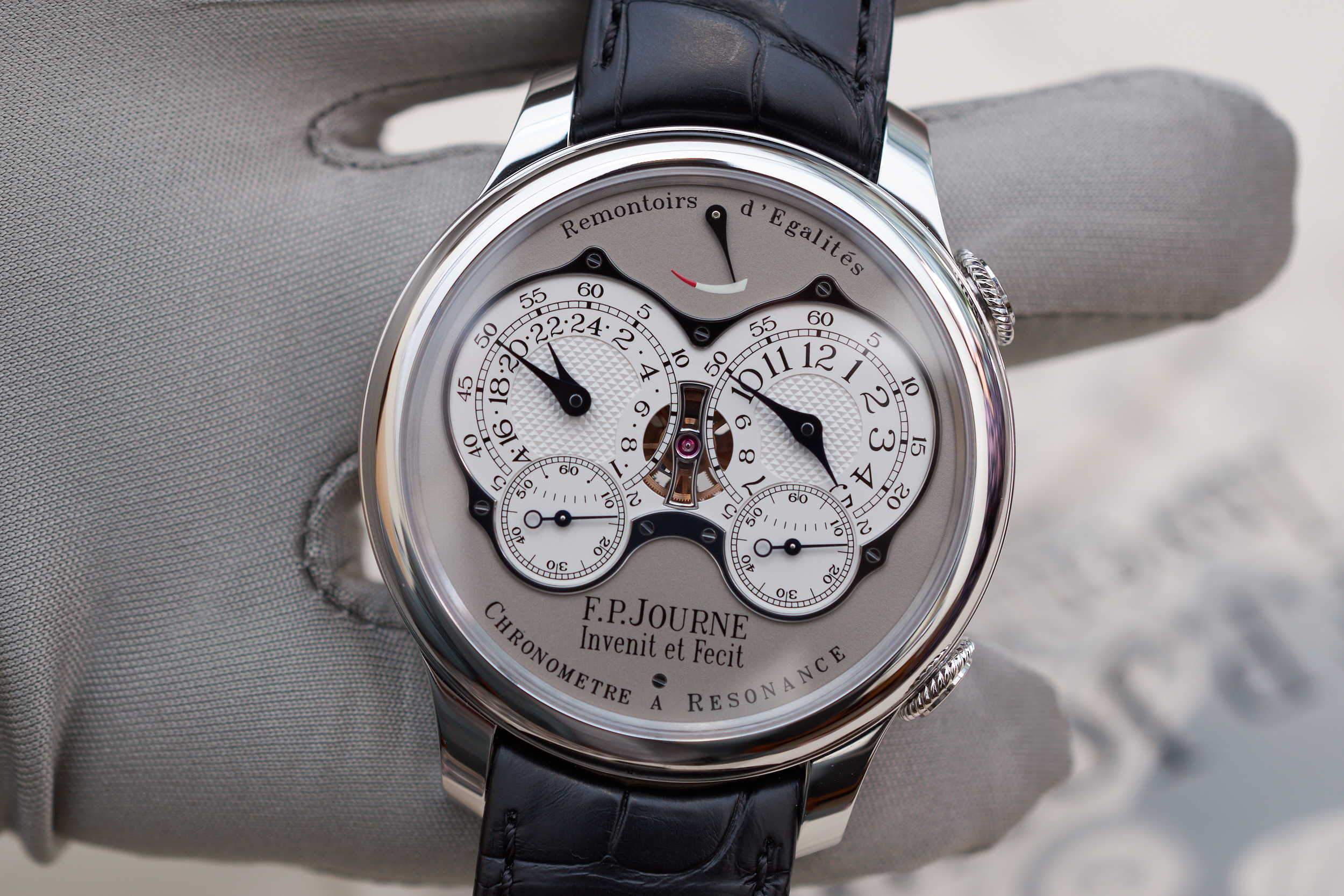 This summer F.P. Journe celebrated the 20 years of Chronomètre à Résonance with an exhibition at the manufacture and two anniversary pieces. We also had a chance to hold the Astronomic Souveraine in our hands.

François-Paul Journe’s uncle Michel Journe owned a small restoration workshop in the late 70s. This is where François-Paul Journe met some of the most special creations ever made as an apprentice. He became a devoted watchmaker and collector of relics like manuscripts (such as Pierre Le Roy’s unpublished works and over 1,000 others from the extensive horological library of Jean-Claude Sabrier he acquired in 2015) and historic pieces.

One clock that was born in the late 18th century via the hands of the French inventor Antide Janvier now operates in one of François-Paul Journe’s meeting rooms. The Double Pendulum Regulator from ca. 1780 is one of the three known examples by Janvier exploiting the acoustic resonance phenomenon first described by the Dutch Christiaan Huygens. Huygens observed that when clocks were hung on the same wall their independent pendulums started to sync up. Any animate body transmits a vibration to its environment. When another body picks up this vibration at the same frequency, it absorbs its energy. In watchmaking it pertains to two independent movements set side by side that align in synchronization.

Inspired by the Double Pendulum clocks of Antide Janvier, Abraham-Louis Breguet created two examples, one of which (the No. 3177 for Louis XVIII, CNAM Museum in Paris) François-Paul Journe came across while working at his uncle’s shop. This made him think about creating first a pocket watch and then a wristwatch using the same natural acoustic phenomenon. The pocket watch did not work as expected and it was dismantled – the uncased movement became part of the 20-year anniversary exhibition at the Manufacture.

Later in the mid-90s he revisited the concept and designed the Résonance wristwatch. Because of the tiny volume the energy flow was far less than in a clock and thus he spent months adjusting it until he got a properly operating prototype in 1998. At the next Baselworld he presented the Chronomètre à Résonance, which have been in production ever since, in multiple series. The mechanism has balance wheels oscillating in the opposite direction with independent gear trains. Each is equipped with a remontoir d’egalité of a frequency of 1 second. The balance wheels must beat at a very close frequency (and thus be regulated very well) in order to enter into resonance sympathy. The remontoire is a sprung device between the escapement and the gear train which transmits a linear force from the mainspring to the balances. As a result, the amplitude of the balance wheel is constant for 28 hours, which is key for accuracy. 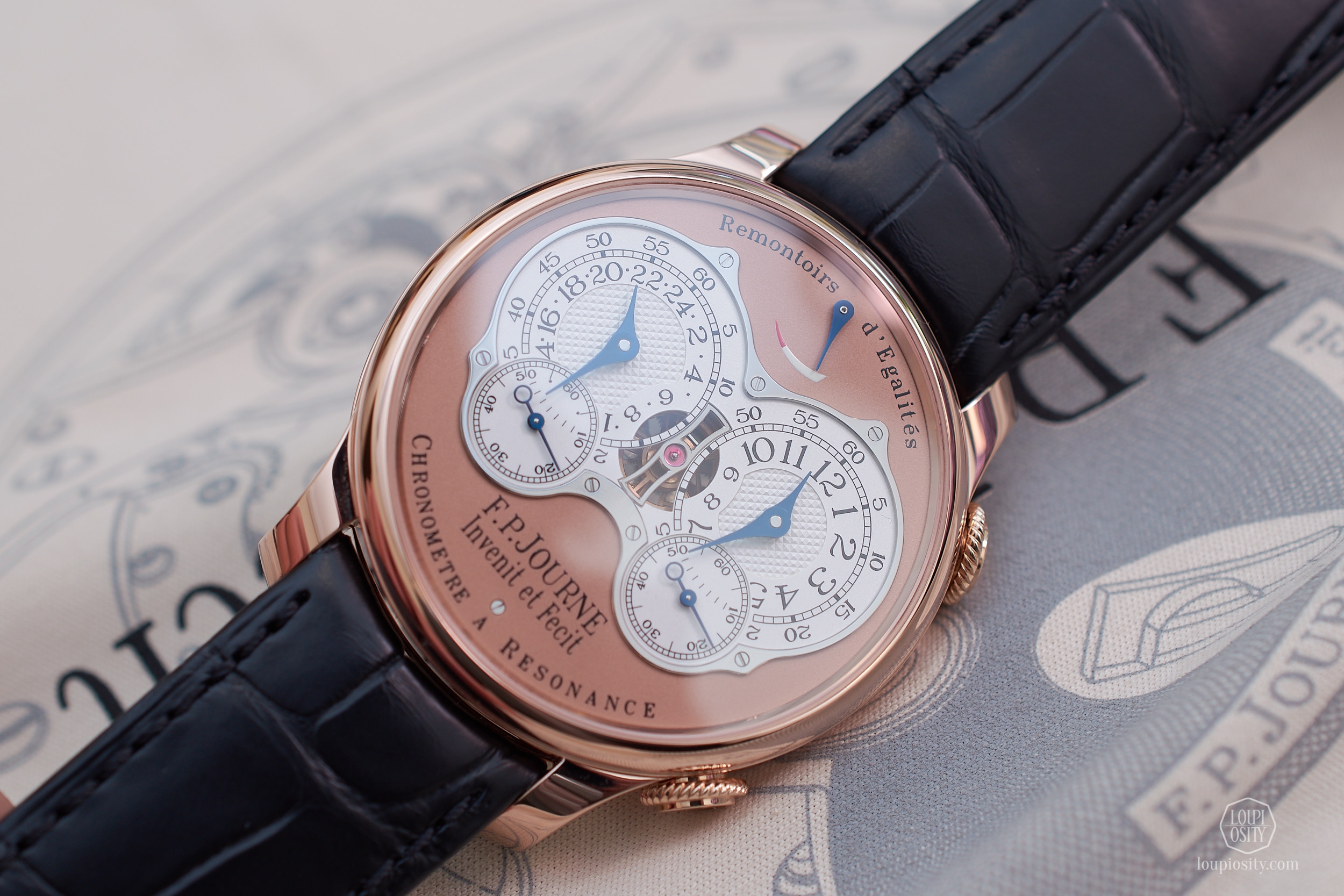 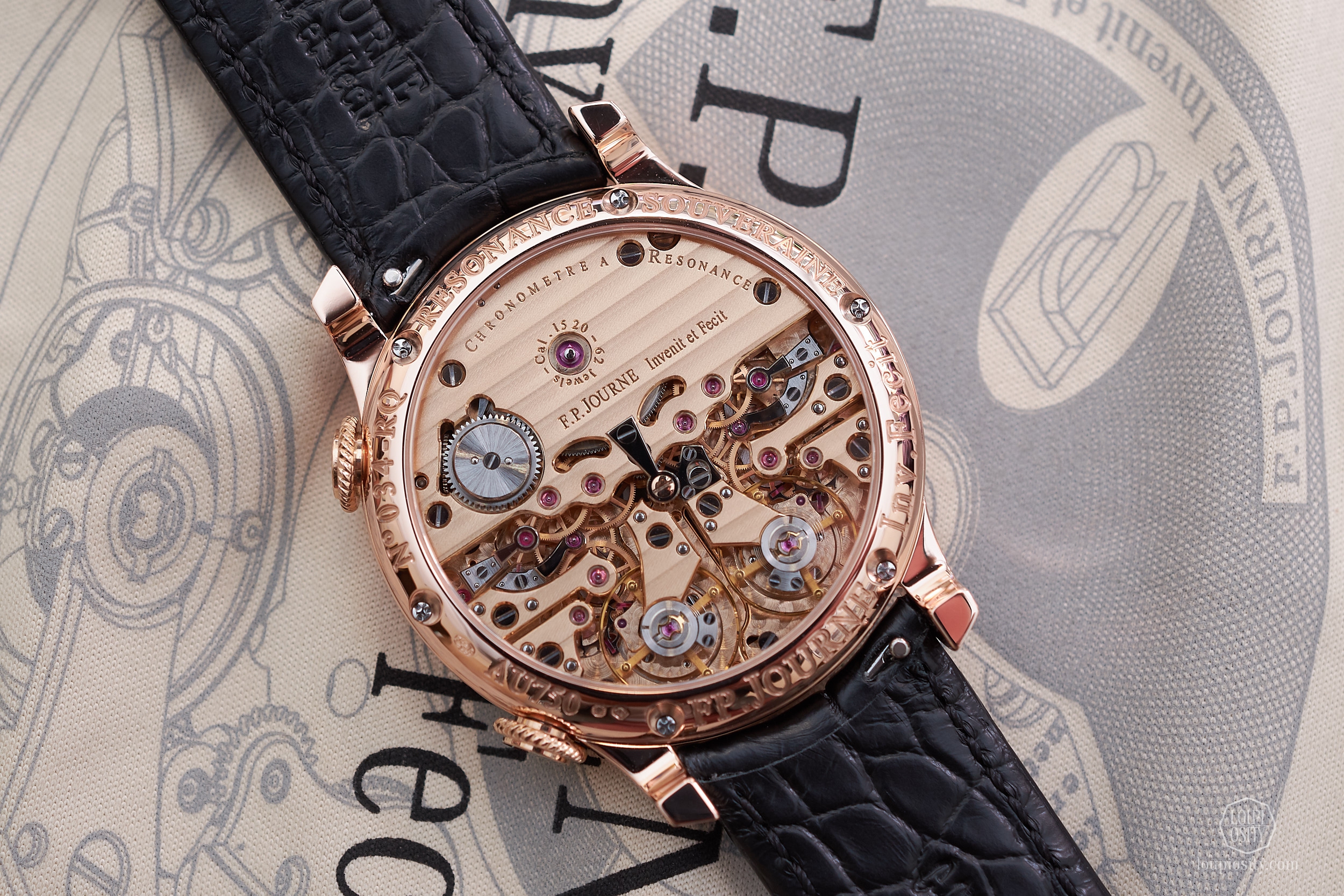 The anniversary models are available in 18 K 6N gold (above) or in platinum, in 40 or 42 mm diameter versions. The dials are in 18 K white or 6N gold with 2 hour sub-dials in whitened silver Guilloché clous de Paris. The pieces come with leather straps or a gold or platinum bracelet. 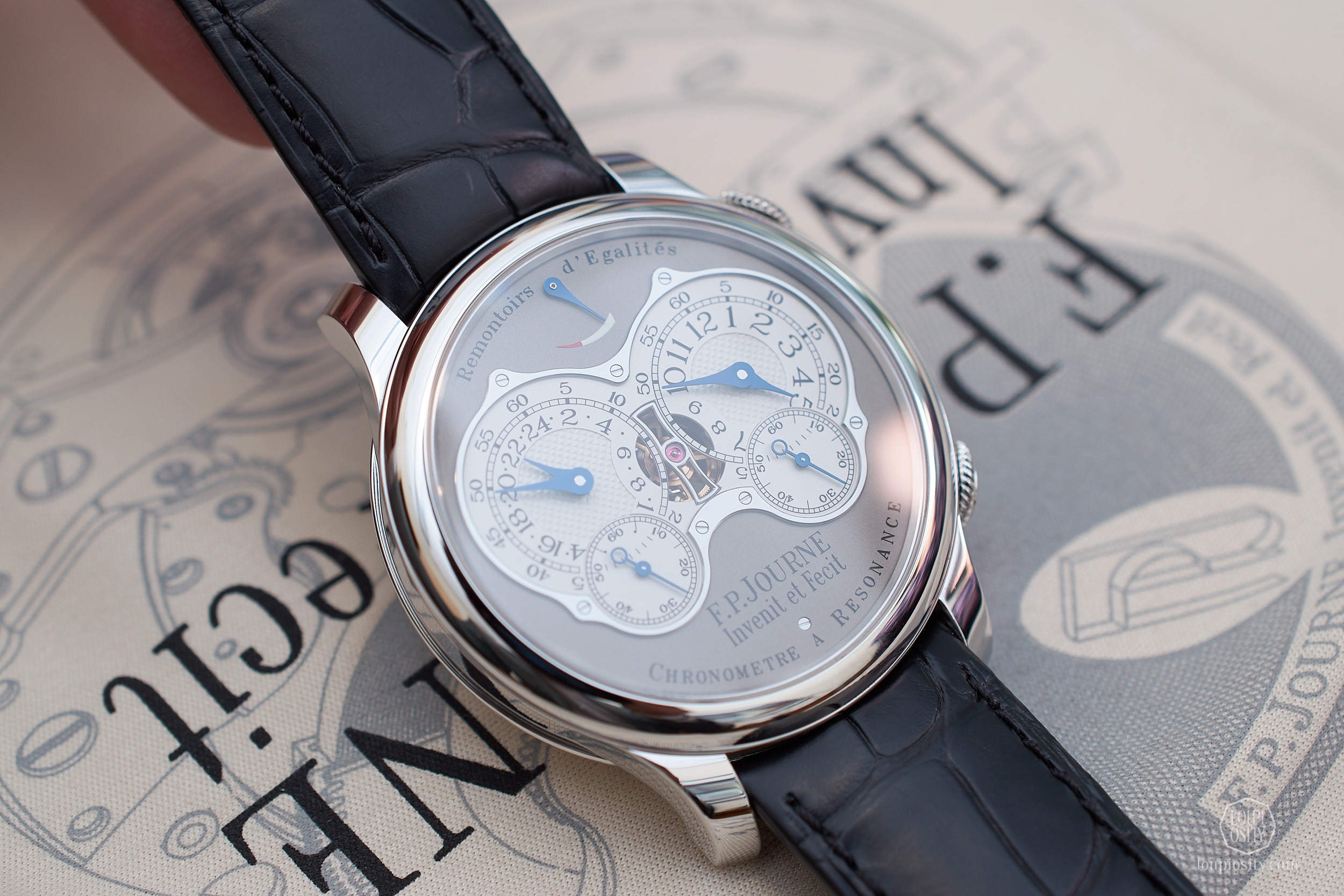 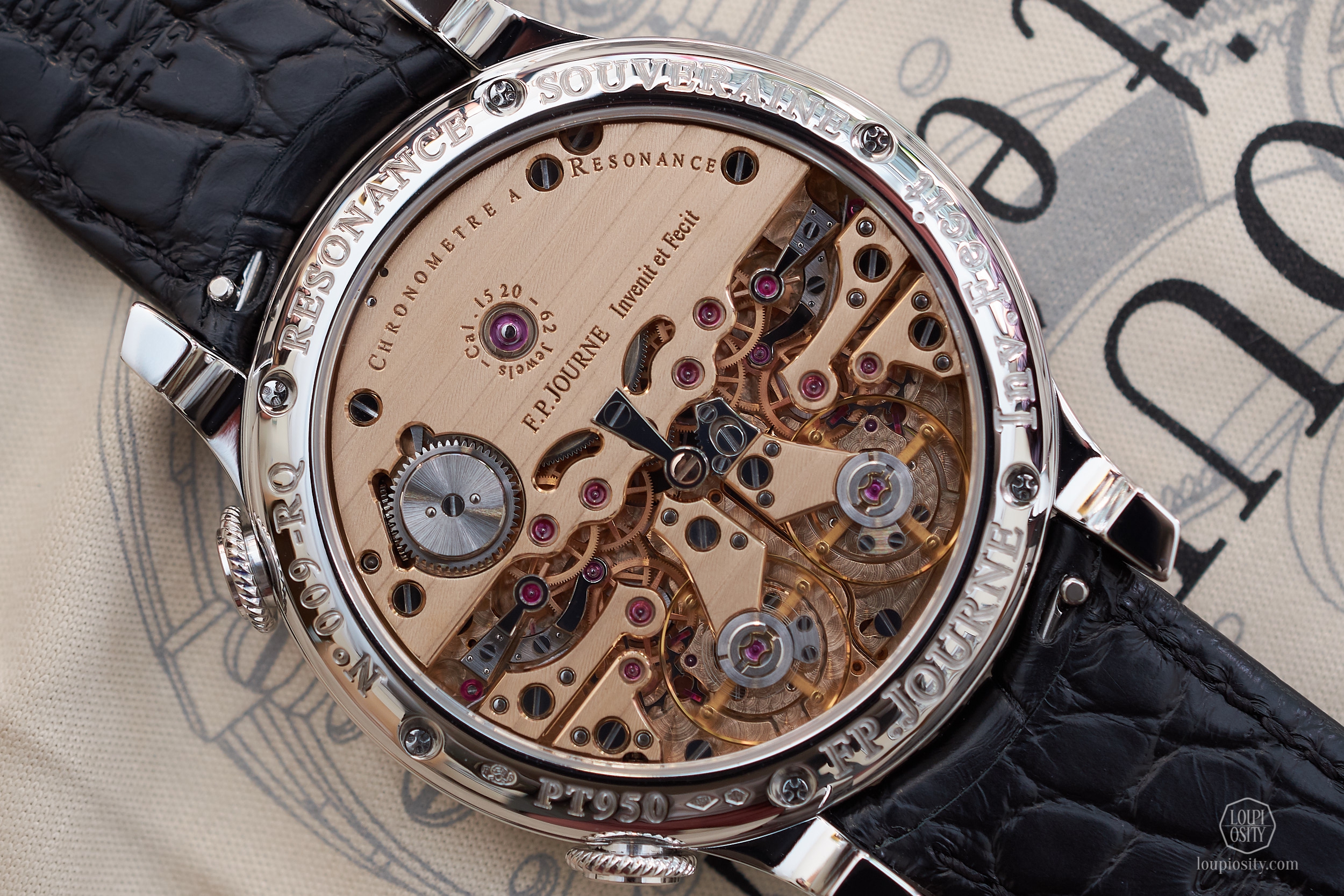 On November 9th, 2019 the audience of the 8th Only Watch witnessed the sale of one of the auction’s highlights: the F.P. Journe Astronomic Blue. The timepiece was the prototype of the 18-function astonishing golden Calibre 1619 encased in tantalum and adorned with blue a chrome dial and an orange alligator strap. Whoever had the chance to hold the piece in their hand was mesmerised by the beauty of the movement and noticed its space saving. The 758-part complex mechanism with 18 time and astronomic functions could be orchestrated by a single crown and fit into a 44mm diameter and 13.75mm tick case. Additionally, each nano meter was finished sparing no effort. 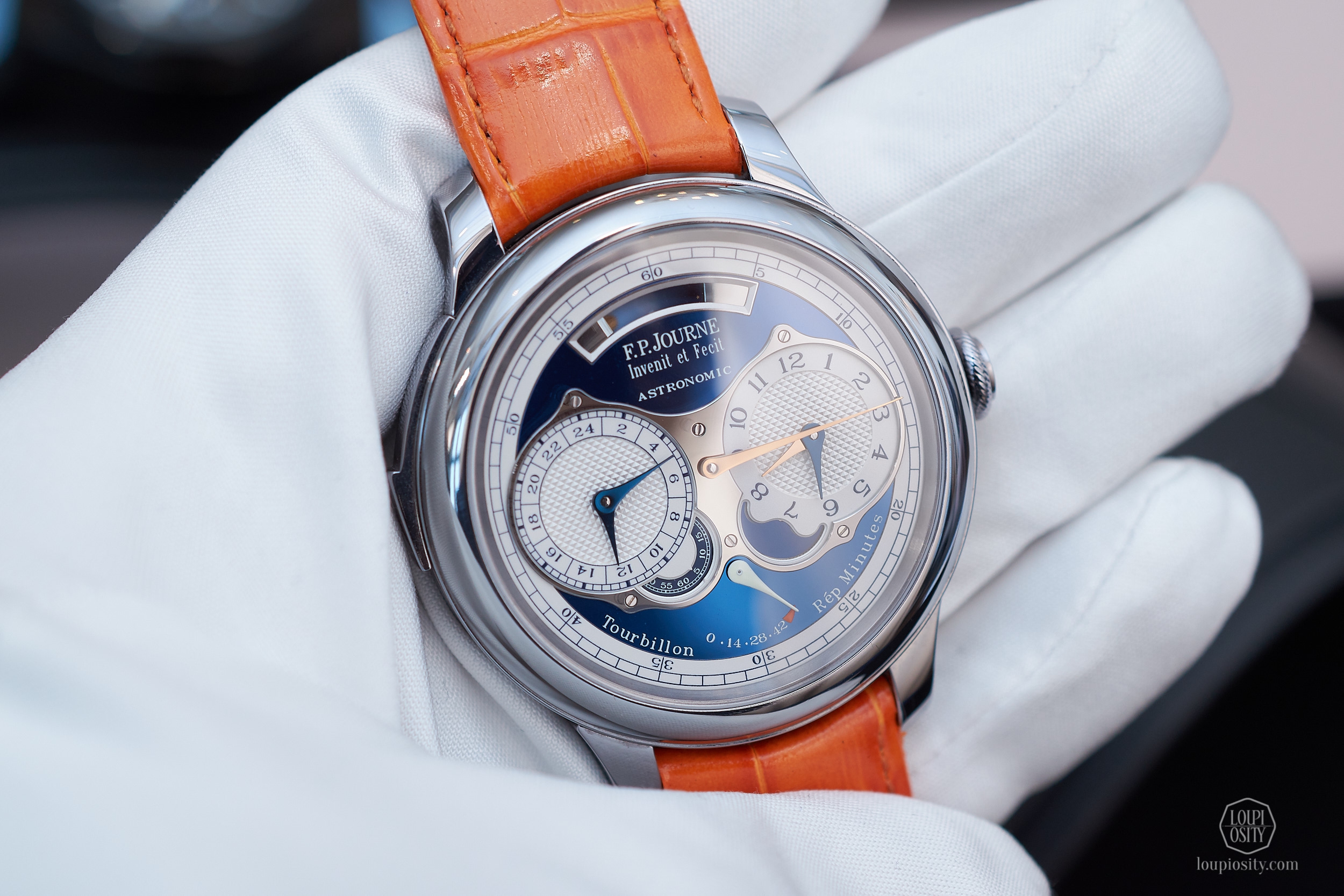 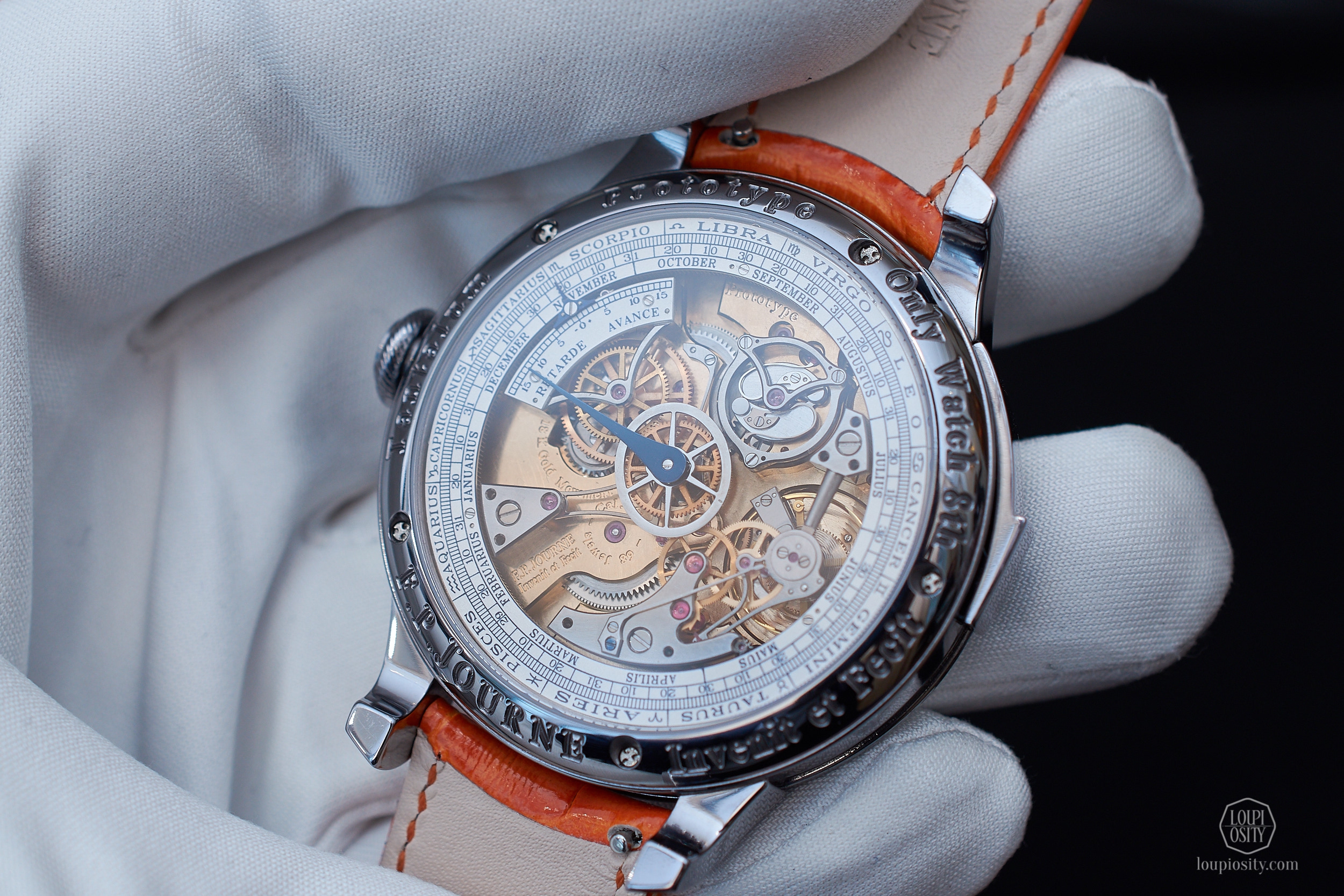 The following week of the Only Watch sale, F.P. Journe announced the Astronomic Souveraine produced in just a few pieces per year micro series. The model is created with a stainless-steel case which amplifies the sound of the minute repeater. The functions provided by the Calibre 1619 are displayed on both sides.

Local mean time is shown by the golden hand in the sub-dial at 3 o’clock, while the blue hand on the same axis tells the hours in a second time-zone. Minutes are shown by the central golden hand. The sun’s daily journey can be followed in the curved aperture at the top. Metal shutters lengthen or shorten the days on both sides according to the day of the year. Moon phases can be read below the hours counter. Sidereal hours and minutes (time based on the daily and nightly motion of the stars across the sky, rather than the Sun) can be seen in the sub-dial at 9 o’clock in a 24 hours scale. Seconds are made visible by the jumping disc below this sub-dial.

The jump of the seconds disk is a direct consequence of employing a remontoir d’égalité system with the tourbillon, which aims to provide a constant force to the escapement for better isochronism. This can be observed at the back, just like the equation of time metrics, which shows the difference between the apparent solar time and the mean solar time. The difference varies between 0 (4 times a year) and 15 minutes (twice a year). The back also provides space for the date and annual calendar indication.

You can activate the minute repeater on the side and adjust all the settings by the crown. 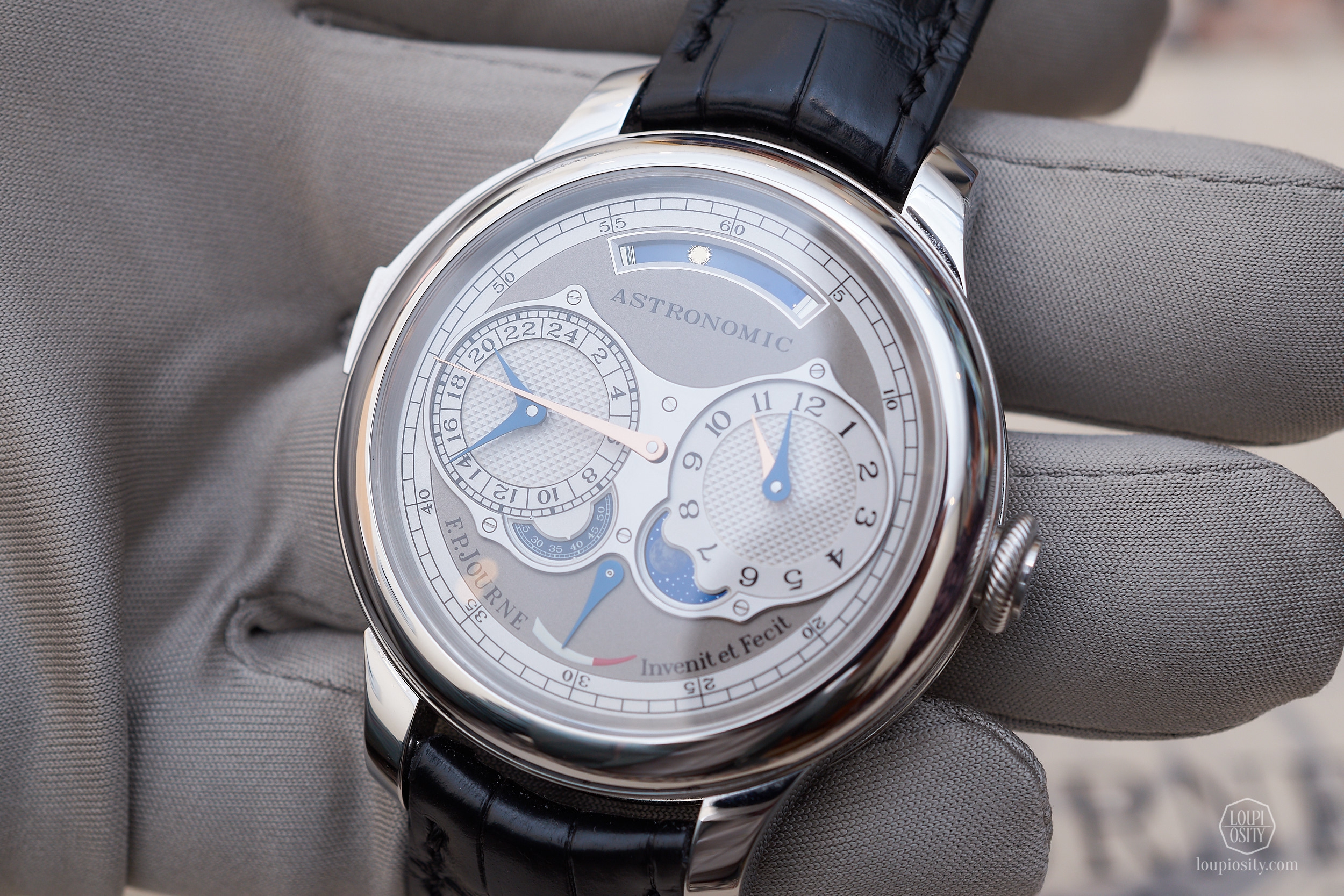 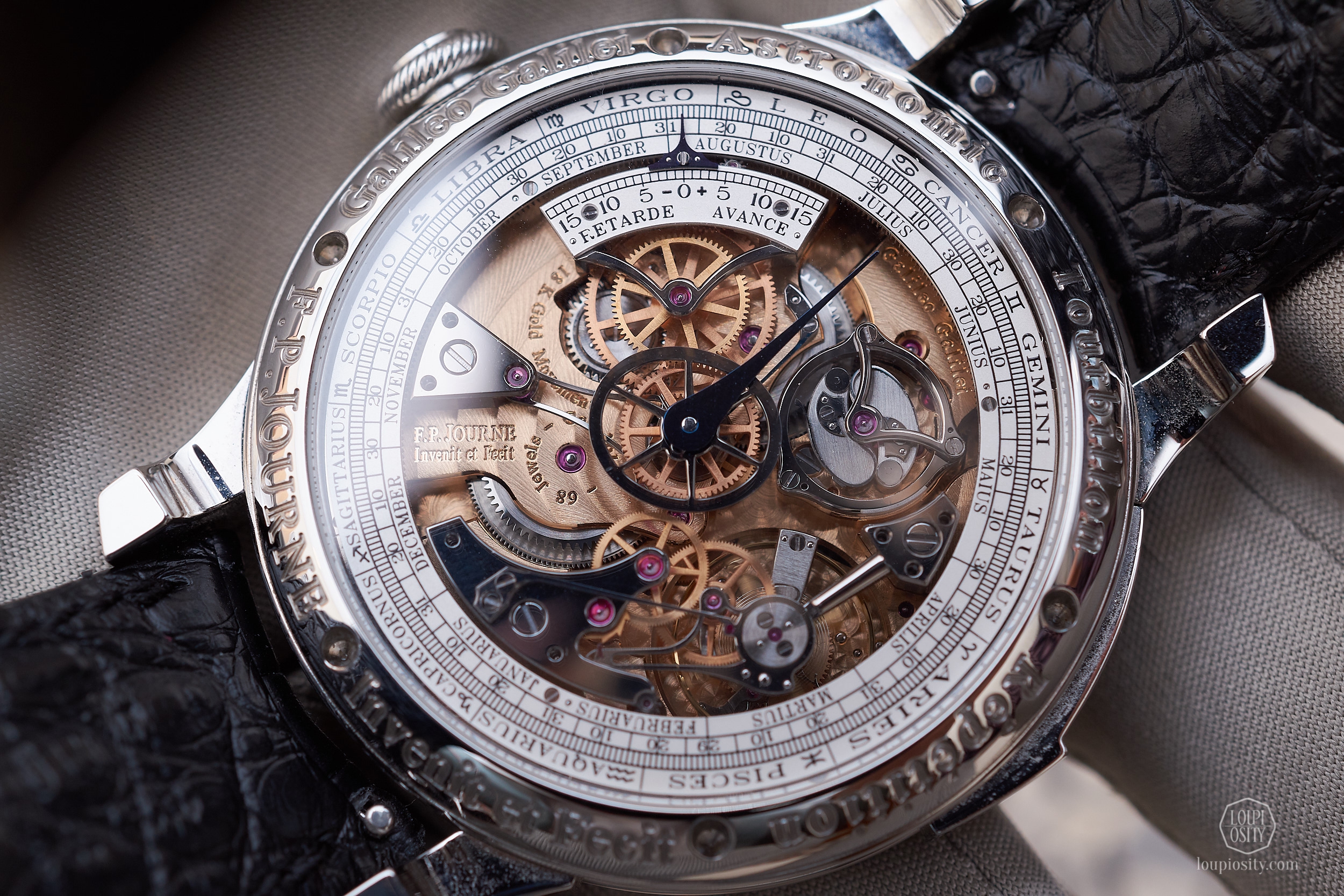 Phillips Geneva Watch Auction: XIV Phillips Geneva Watch Auction: XIV will be held on 5 and 7 November in Geneva. There will be two sales events on the two days with very interesting haute horlogerie rarities.'Oeuvre d’Or' by Ferdinand Berthoud To the SIHH, Chronométrie Ferdinand Berthoud brought 'Oeuvre d’Or' limited editions of the FB 1 with patinated gold dial. Look at this beauty!Only Watch 2021 The ninth edition of the Only Watch auction will be held 6 November 2021 in Geneva. The selection includes unique timepieces created by the finest brands to support the research of Duchenne muscular dystrophy.