Posted by Eszter on 4th July 2022 in News
Tags: Geneva, jewellery, THE RAYY 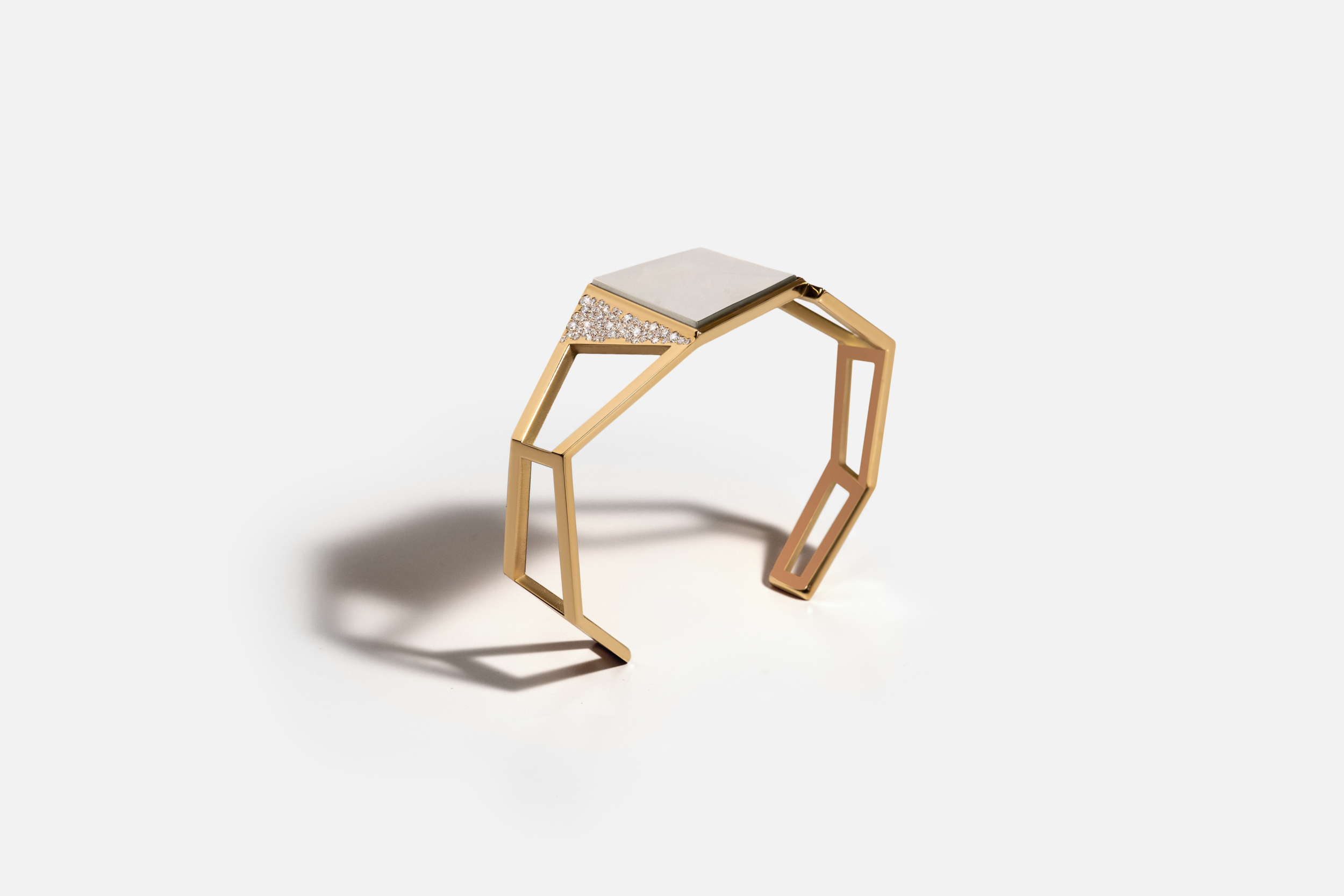 An ingenious development of two students meets attractive design and playfulness in the jewellery of the new Swiss brand THE RAYY. In the last week of June, I let myself marvel at the design and the optical phenomena applied to project a secret message at their pop-up store in Geneva.

I’m sipping my mint-lemonade on the terrace, watching the shadows play as the clouds pass by. I put my glass on the table and the sun rays collected in the filled glass start dancing on the table’s surface. I shake it a bit to observe the changing pattern as the liquid ripples in the glass. ‘This phenomenon is called caustics’ – earlier this week Yuliy Schwartzburg, one of the scientists behind a very spectacular optical development at the Geometric Computing Laboratory at EPFL (Swiss Federal Institute of Technology in Lausanne) told me. Together with co-student Romain Testuz and Prof. Dr Mark Pauly they studied caustics, the captivating light patterns created by materials bundling or diverting light by refraction or reflection. This is what I can see on my table surface or at the bottom of the swimming pool. What they wanted to achieve was to control how light is reflected back, so they can project a desired shape on a target medium such as texts and even images.

‘For this, we need to machine a reflective or translucent surface, which collects light to exactly where we want it. When you look at it closely, the surface looks like it was polished, but in fact it has tiny angle variations and therefore is a bit wavy’ – Romain added. ‘In our research we worked out an algorithm that calculates these angle variations based on three input parameters: the position of the light source (the sun or artificial lights) relative to the machined surface we call generator, the image we want to project and the position of the target surface. Once it is calculated, then an industry standard CAD file is generated of the 3D surface, which can be directly machined with a CNC.’

The material can be transparent like resins (eg. Polymethyl methacrylate – PMMA), in which case it is lit from behind, or reflective like polished metal (eg. gold) – lit from the front.

The technology was baptised to Rayform™ and received patents for various aspects. You can learn more about it and one of its first applications for the installation underneath the Rolex Learning Centre at the EPFL in this video.

If you are into haute horlogerie, you might also remember the feat appearing on a piece by one of the most ingenuine brands, not so long ago. Yuliy and Romain showed one of their prototypes to Maximilian Büsser in Geneva, who got so excited about the light-shaping technology that he let the crown of the 10-year anniversary MB&F HM3 Frog X model be ‘encoded’ to project the image of their signature battle-axe symbol.

Apart from being a visual experience on jewellery and watches, it may well also be a hidden watermark in the combat against counterfeiting.

Scientists Romain Testuz and Yuliy Schwartzburg met designer Noémie Arrigo and started experimenting using this technology to personalise jewellery. Out of their collaborations, the Switzerland-based fine jewellery brand THE RAYY, was born in 2019 with Noémie as the Artistic Director. Building up the business on the solid design and technology foundations, a former senior manager in watches and fine jewellery field, Ingrid Gosselin joined the team in 2021 as General Manager. The brand showcased their collections in a pop-up store last week in Geneva. 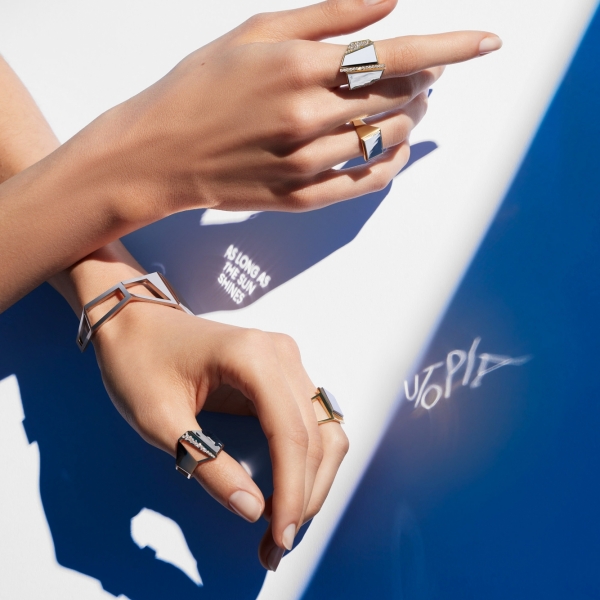 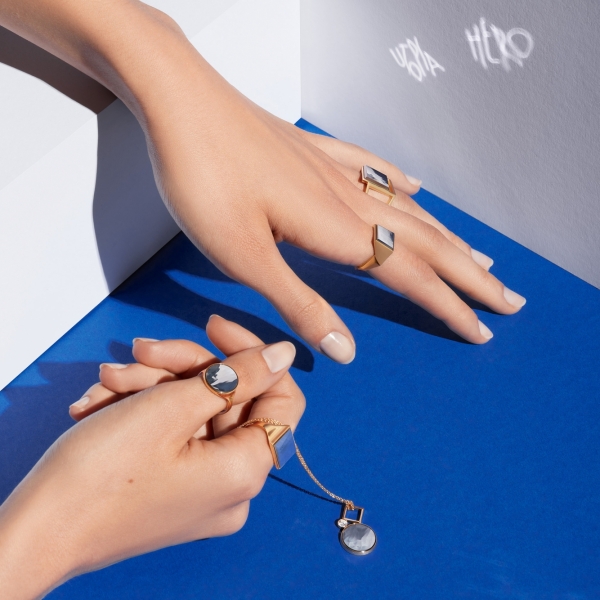 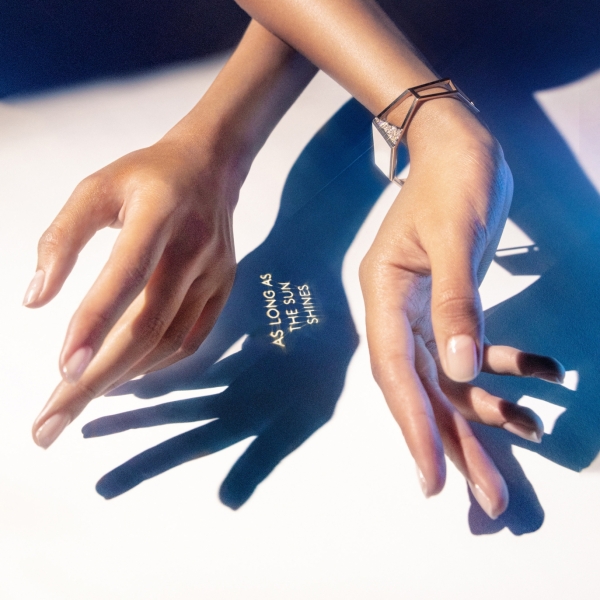 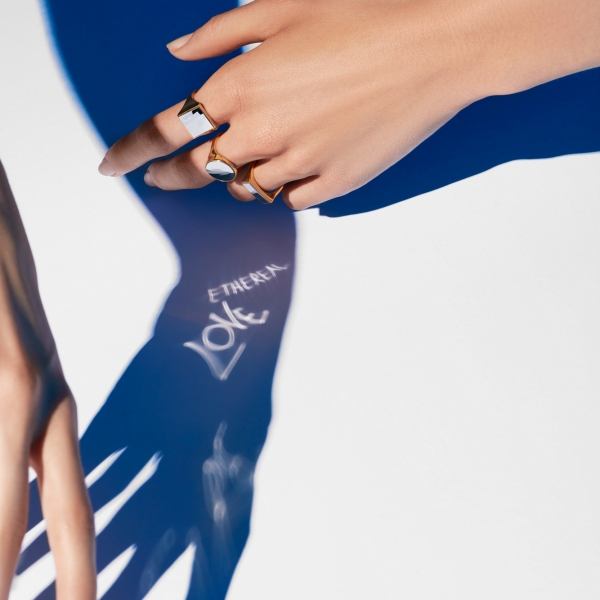 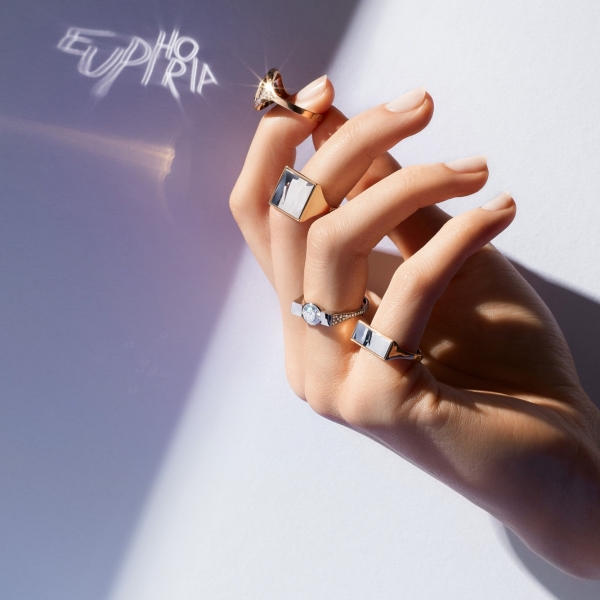 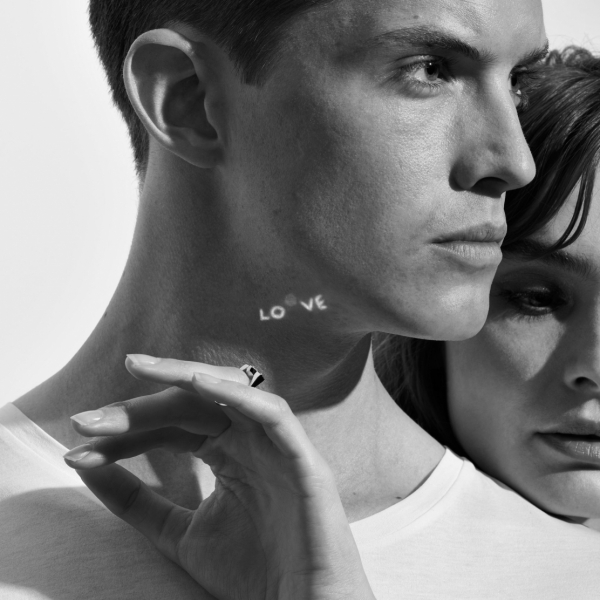 Modern they look, but funny enough, the concept reminded me of the lockets of the past centuries. The locket was a type of pendant, which opened up to reveal a portrait, initials, a tiny letter, even medicine or in some ‘well-justified’ cases poison. Dating back to the 16th century, they were important accessories for the wealthy, which became highly esteemed sentimental jewellery in the Victorian era (approximately between 1820 and 1914). Lockets were a kind of amulet and reminder of someone or something important – just like these in front of me: they hide a normally invisible token of a memory revealed only when the time is right. Playful just like opening and closing a locket, you can entertain yourself with the reflection: reveal, hide, change the target surface or the angle of incidence. Even better, the token will become visible at the most random times – bringing a smile when you need it the most.

When I first saw them on the creative photos I liked the cool and consistent design, but this is really the type of jewel that comes alive when you put it on. They all have one or more components machined with the above technology, projecting the shape or text of your choice. The pieces of the two collections, Facets and Geometry, can be ordered with a custom text of 4-8 letters depending on the size of the reflective surface. What’s more, Barcelonian visual artist Blanca Miró Skoudy created four distinct identities for a very special experience when opting for a piece in the Facet collection. Are you Wild as a Hurricane, Hot as the Sun, Solid as a Rock or Moody as the Waves? You can create or upload a photo of you on the website, apply one of these identities and ‘Blanca’s mirror’ shows who you really are. The result is a funny stick face which can be added to the jewel as a hidden facet.

These can appear in various shapes of the two collections on rings, pendants and bracelets. 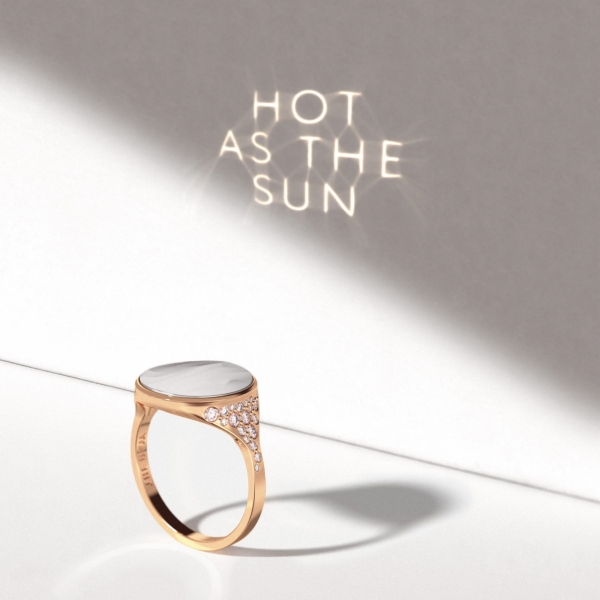 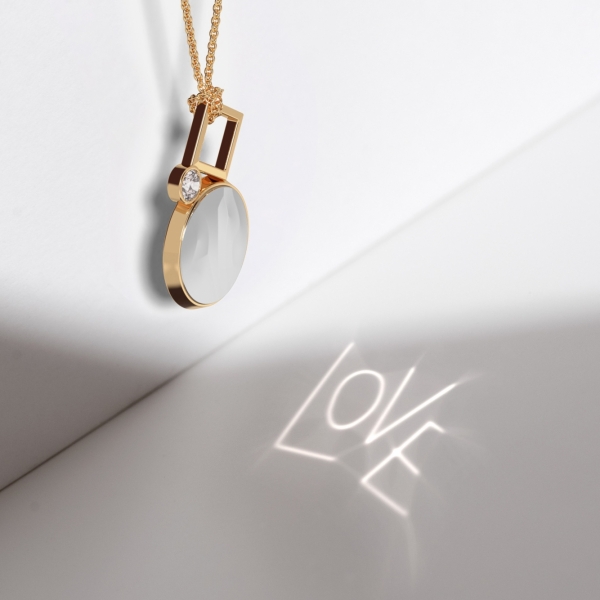 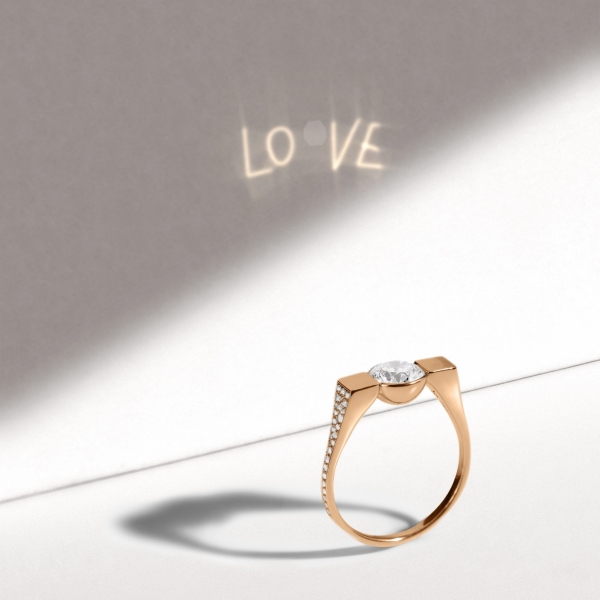 Beyond design, the team puts great emphasis on ethical and sustainable sourcing and operations. All pieces are made of responsibly sourced recycled white / rose / yellow gold, diamonds are all lab-grown and packaging boxes are designed to avoid waste and are made of recycled and recyclable materials.

THE RAYY does not have a showroom yet, the pop-up stores are the first showcases of the jewellery and retailers are being scouted. If you’d like to see the pieces, contact the team over the website and look out for announcements of pop-up events and retailers in the future. 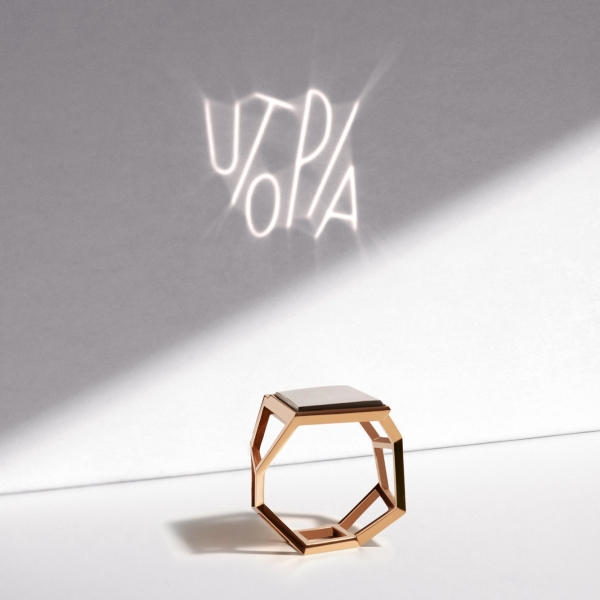 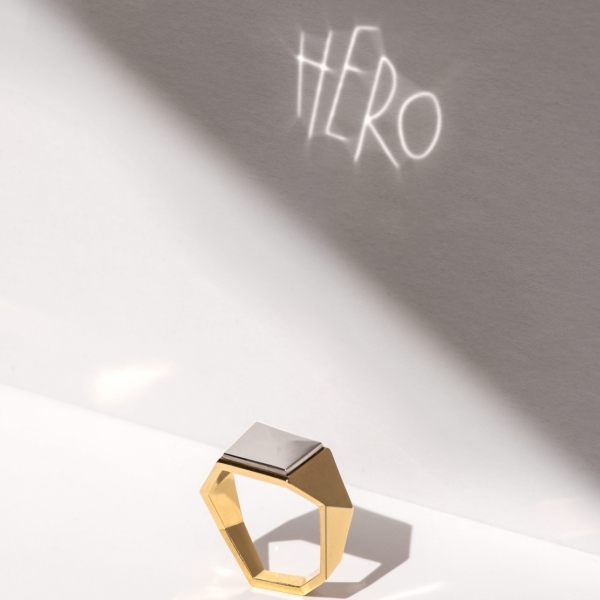 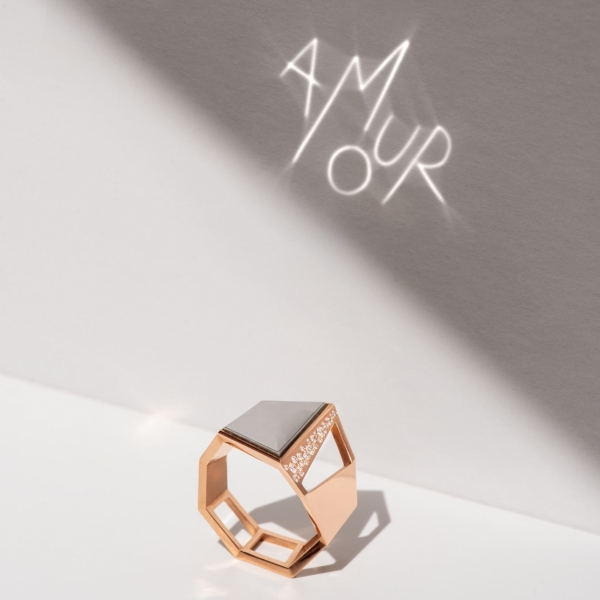 Photo credits: THE RAYY
All registered trademarks are property of their respective owners.
All rights reserved.

Cross if you dare - Czapek & Cie’s Antarctique Passage de… Following the success of its Antarctique Terre Adélie collection in May Czapek & Cie. just launched the Antarctique Passage de Drake watch line. We previewed the new pieces in Geneva.The stellar odyssey Jaeger-LeCoultre summoned the starry night skies of the Vallée de Joux in the dazzling bustle of the Watches and Wonders. Among other creations the manufacture presented two new celestial timepieces based on the fantastic Calibre 945 and an Atmos clock displaying the relative positions and movements of Earth, the Moon and the Sun.Girard-Perregaux: changing strategy We met Patrick Pruniaux CEO of Kering’s watch brands Girard-Perregaux and Ulysse Nardin in La Chaux-de-Fonds to hear about the new strategy of GP.