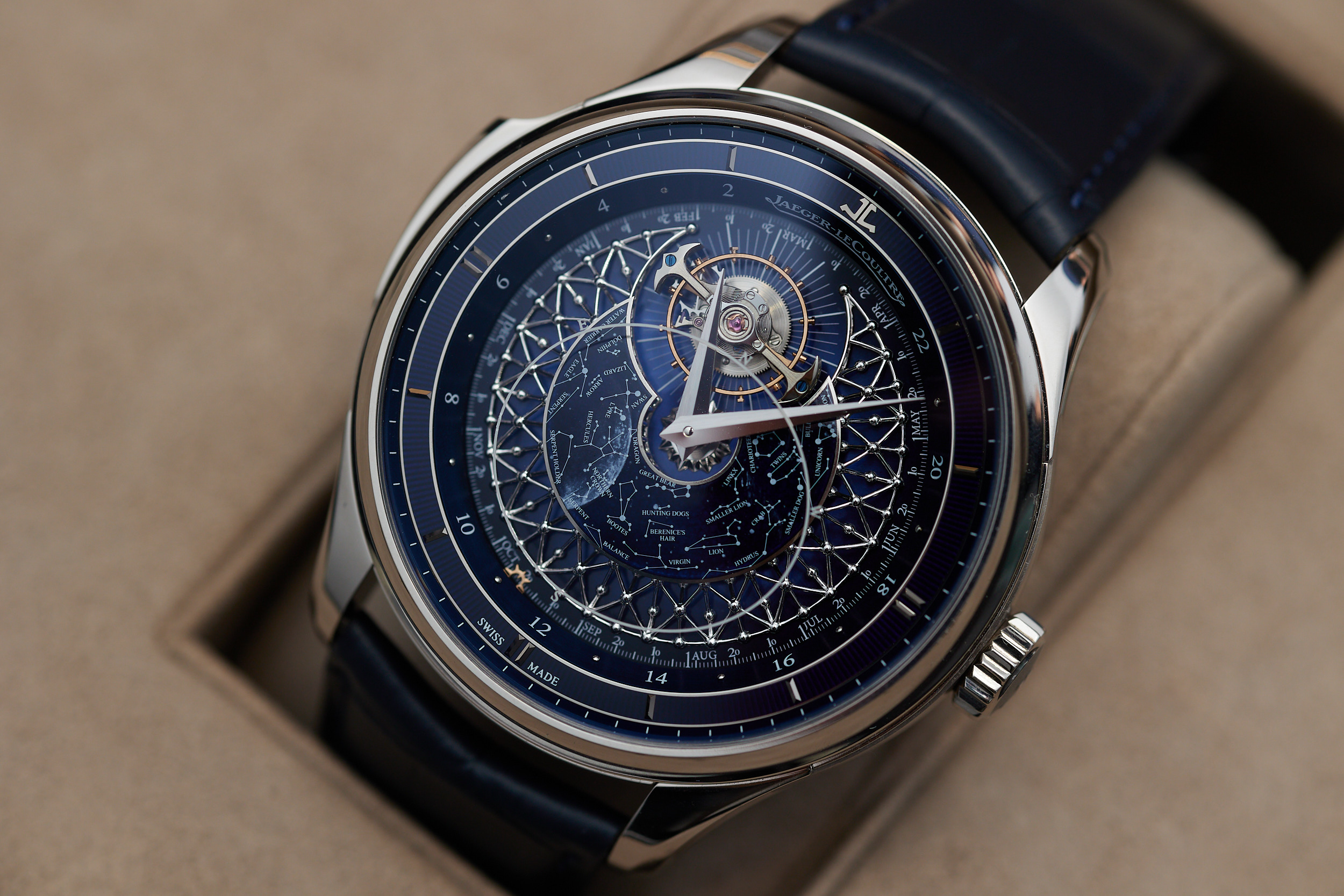 Jaeger-LeCoultre summoned the starry night skies of the Vallée de Joux in the dazzling bustle of the Watches and Wonders. Among other creations the manufacture presented two new celestial timepieces based on the fantastic Calibre 945 and an Atmos clock displaying the relative positions and movements of Earth, the Moon and the Sun.

Curiosity? Fortune? Excitement? Exploration and expansion of the boundaries of our known world have always been among the deepest desires of humankind. Discovering the highest peaks and the furthest corners of the landmass have been achieved throughout the centuries. We have some knowledge about the seas, although the depths still hide many secrets. The outer space? Until the mid-20th century young and old could only gaze at its endless fields, observe its regularities and phenomena, calculate distances and cycles, and make conclusions about the invisible. We thought the universe revolves around us (well I guess this still stands, mostly), then we understood that we are a tiny spot wandering in space…here comes the cliché : the more we know, the smaller we become.  On the other hand, this also means that the smaller we are, the more stars surround us. And this is great news for all of us who enjoy gazing at the skies for the insignificant lighting dots, staring at the Big Black for hours to catch shooting stars and other celestial events. We used to watch them from the ground, but we managed to install telescopes in space to see further. Hubble just spotted the most distant star ever seen – its light has taken 12.9 billion years to reach Earth, appearing to us as it did when the universe was only 7 percent of its current age. The James Webb Space Telescope was designed to see far deeper in the infrared range. It is now calibrating the 6.5m mirror system – what are we going to find out there?

Getting lost in the night sky, and eventually experiencing a Stellar Odyssey will always be a desire of many. This including the watchmakers of Jaeger-LeCoultre, who over the years, have repeatedly created mechanical timepieces with a celestial theme and complications. In 2022, the company invites us on the Jaeger-LeCoultre Stellar Odyssey, a touring exhibition and a series of themed events. First stop: Watches and Wonders in Geneva with Nobel Prize winning astronomer Didier Queloz and world-renowned mixologist Matthias Giroud.

On this occasion, Jaeger-LeCoultre presented a number of celestial-inspired timepieces, such as the Master Hybris Artistica Calibre 945 wristwatch in two breathtaking editions, the Atmos Hybris Mechanica Calibre 590 perpetual table clock and the two Rendez-Vous Star timepieces with an interesting randomised shooting star complication.

The astonishing Calibre 945 was created in 2010. The movement incorporates a sidereal calendar.

As opposed to a solar day which measures the time for the Sun to return to the highest point in the sky (24 hours), a sidereal day represents the time it takes for the Earth to rotate around its axis (23 hours, 56 minutes and 4.1 seconds). While the Earth rotates once, it also travels along its elliptical orbit 2.5 million kilometres, therefore it has to turn ca. 4 minutes more in order to see the sun at the highest point again. So a sidereal day measures the rotation of Earth relative to the stars rather than the Sun. Astronomers use the sidereal day to see the stars exactly at the same place as one sidereal day ago. Additionally, they can calculate the rotation cycle of planets by isolating their spinning from their speed of travelling around the Sun.

The Calibre 945’s mechanism allows the sidereal calendar to be displayed by a central vault, which rotates anti-clockwise once in every sidereal day, 23 hours, 56 minutes and 4.1 seconds. The vault embraces Jaeger-LeCoultre’s Cosmotourbillon, which revolves once around its axis every minute and at the same time turns around with the vault anti-clockwise. The vault shows the star constellations in the Northern Hemisphere as seen in the Vallée de Joux in the given moment at the 46th parallel latitude – the home of the company. A small golden sun indicates the month of the zodiacal calendar and solar time on a 24-hour scale at the periphery. 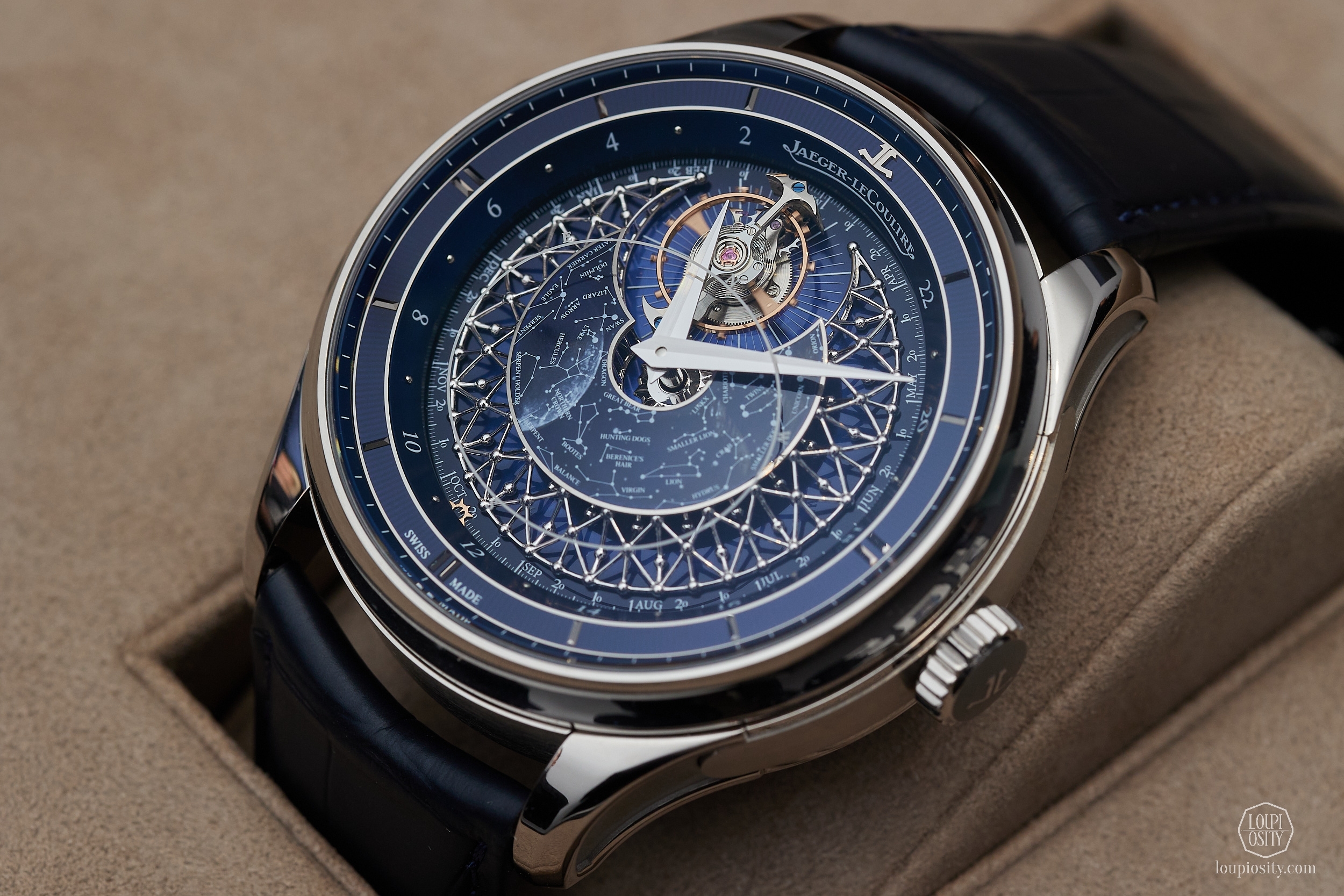 If that wasn’t enough, the hand-wound movement is also a minute repeater that strikes hours, quarters and minutes at different sounds, making the Calibre 945 very complex.

Jaeger-LeCoultre presented two 5-piece limited editions. The sky vaults of both were created using the grisaille enamel technique, which gives a three-dimensional effect to the surface. Artisans prepare the dark background first, which gets fired layer by layer multiple times until the desired depth and colour intensity is achieved. This is followed by white layers brought up with a fine brush, and fired in between layer by layer again. The white gold ‘Atomium’ has blue enamel with a silvered metal mesh under the dome of the sidereal constellation display. The pink gold of the ‘Galaxia‘ is matched with a black enamel beautiful planetary painting that flows down to the feet of the dome.

Both pieces represent a fusion between artistic and technical excellence. 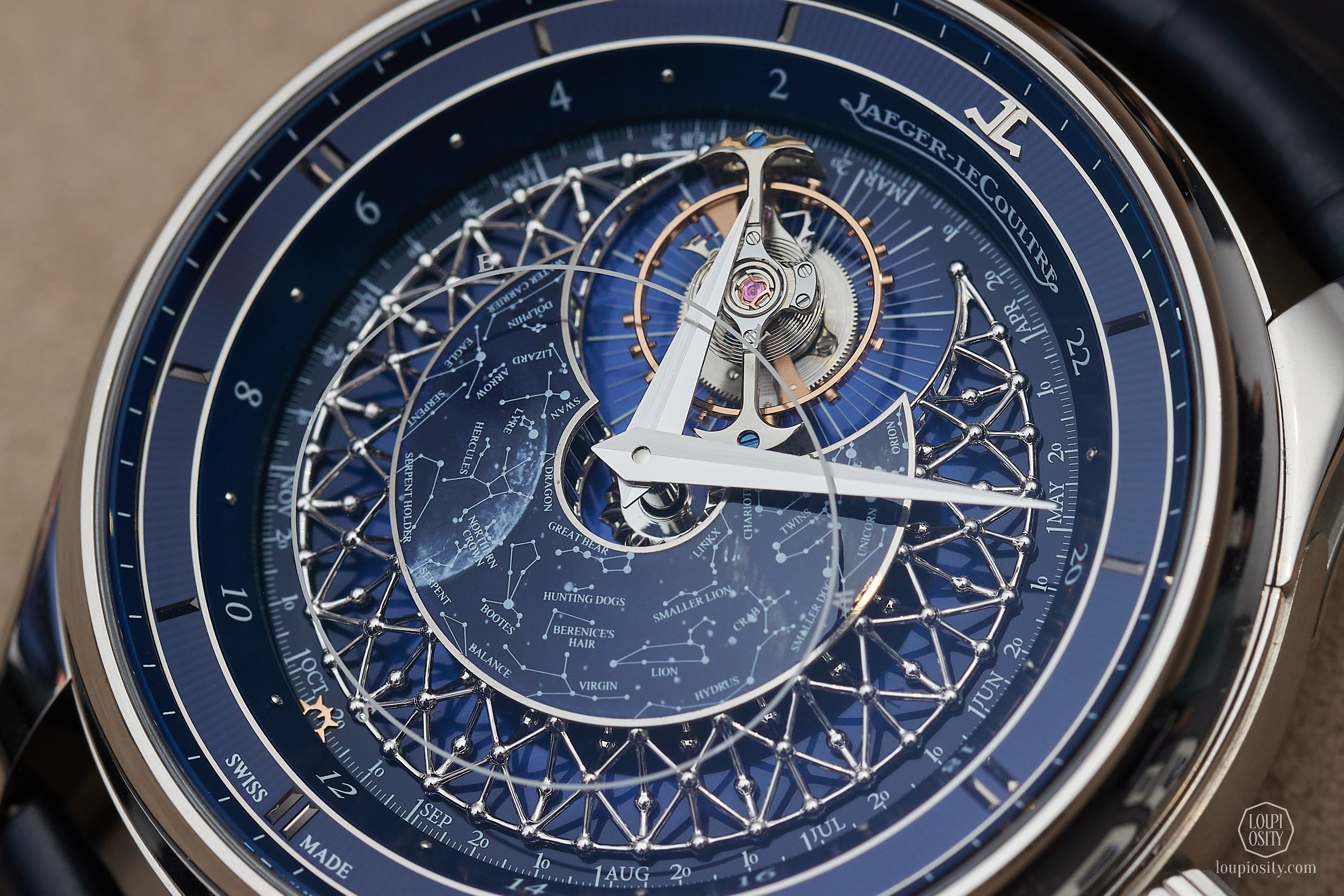 We have been great admirers and fans of the manufacture’s Atmos clocks. With its iron belly energy source, filled with the mixture of gaseous and liquid ethyl chloride, the table clock can operate without any human intervention. The ethyl chloride expands and contracts if temperature changes slowly anywhere between 15-30 degrees Celsius.

In the newly introduced model, perpetual operation is combined with a highly accurate complication that reproduces the true cycles of the Earth, Sun, and Moon. It also displays the passing of seasons and a zodiac calendar.

The Atmos can run on this small amount of energy (40 times less than what a 4Hz movement typically offers) for so long, because the friction is reduced to the minimum and the balance oscillates in the torsion pendulum only once or twice per minute (the balance of the Calibre 590 – once). Any additional function that is added to the movement should not increase the energy requirements greatly. Therefore, watchmakers chose mechanisms measuring longer cycles like seasons, months and planetary movements.

The nickname ‘Tellurium’ comes from the ancient mechanisms that modelled the heliocentric solar system Copernicus had published in 1543. The clock reproduces the Earth’s rotation around its own axis and its orbit around the Sun, while the Moon is also turning around its own axis and orbiting around the Earth. The fixed central golden metal rays represent the Sun, around which the two companions revolve in a sub-dial. The Earth’s rotation is one solar day (24h). The Moon’s journey around the Earth (mean synodic month) is 29 days, 12 hours, 44 minutes and 2 seconds in length. The mechanism is so accurate that one day of error accumulates in every 5,770 years.

As the planets revolve around the Sun in a solar year (365.2466 days – very close to the Gregorian year of 365.2425), their disk itself points to the appropriate season at the circumference. Due to the difference above, one day of adjustment is required in every 390 years.

Jaeger-LeCoultre’s Métiers Rares® atelier is responsible for the decorative lively miniature painting to detail the Earth. The Moon has been laser engraved to reproduce its surface and in the ring around this sub-dial meteorite pieces are inlaid. For this model, the glass took a cylindrical shape and was hand-painted with the constellations.

The fantastic table clock will adorn 10 desks only. 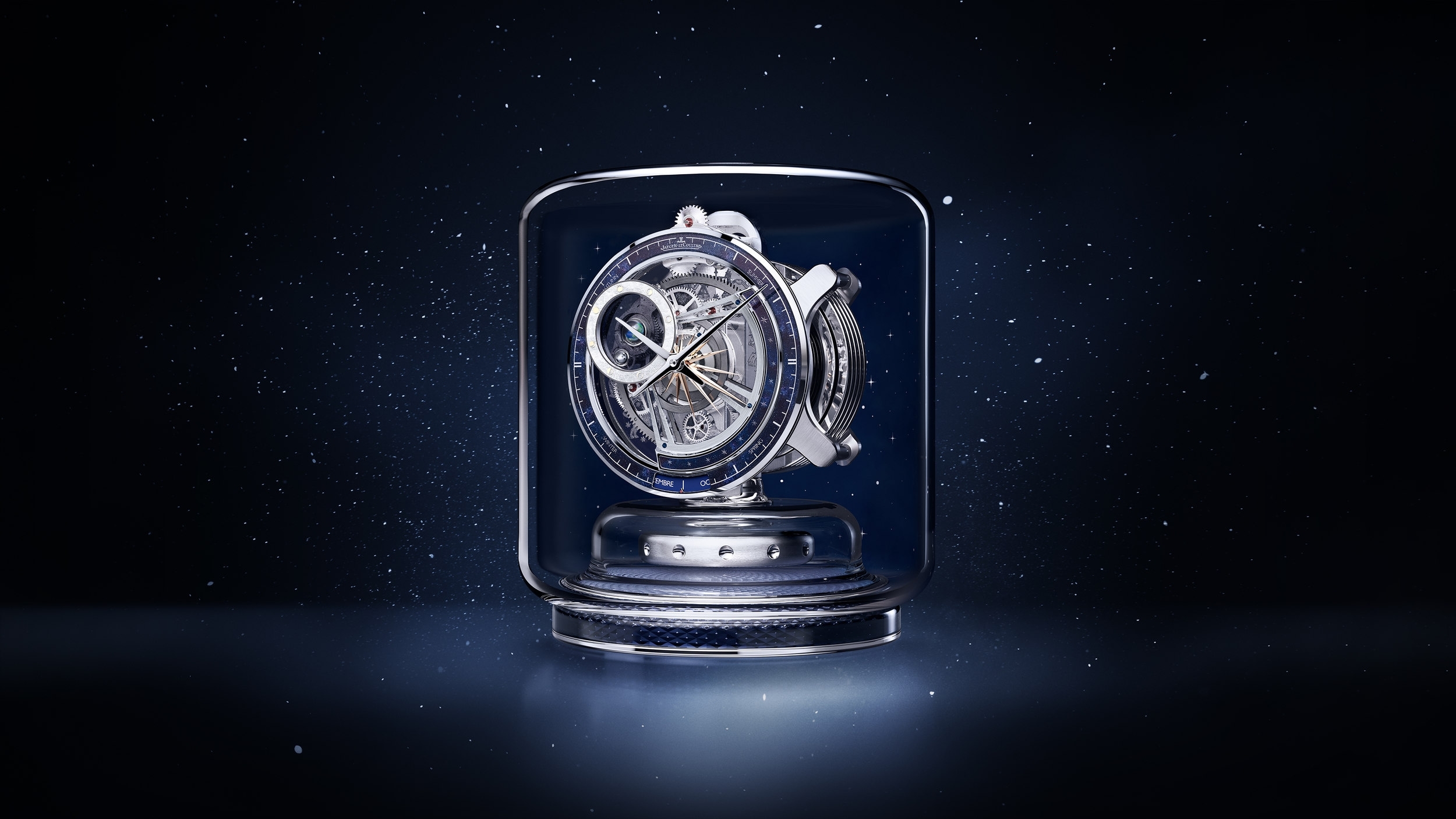 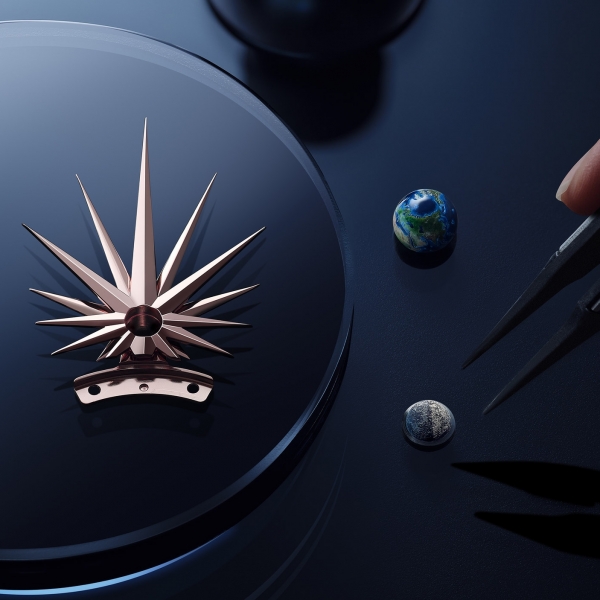 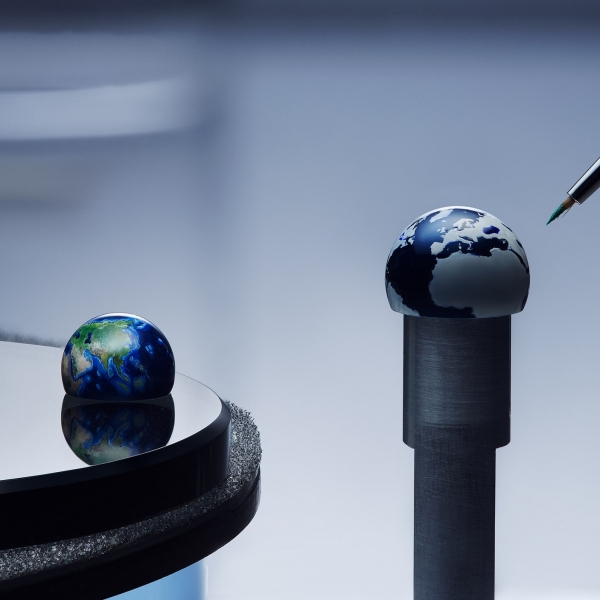 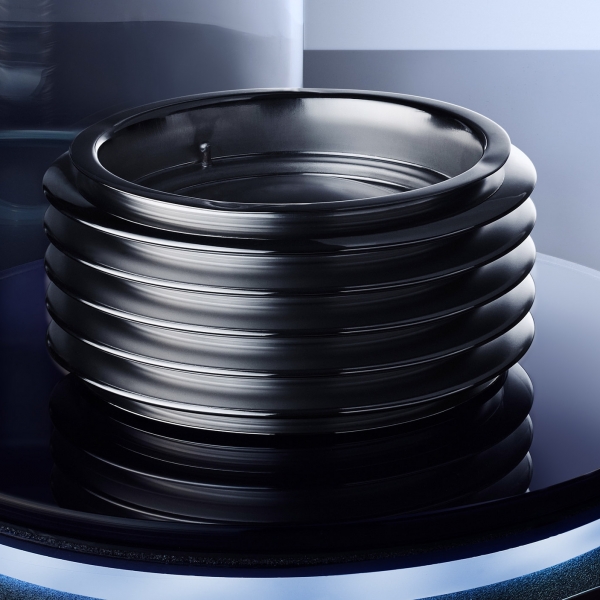 Photo credits: Jaeger-LeCoultre. Loupiosity.com
All registered trademarks are property of their respective owners.
All rights reserved.

'Details: Genealogies of Ornament' - Homo Faber 2022 The ‘Details: Genealogies of Ornament’ is set in the Nautical School area at Fondazione Giorgio Cini. It is one of 15 exhibitions that comprise the Homo Faber Event 2022, organised by the Michelangelo Foundation. Ulysse Nardin - Vertical Odyssey At the first show appearance since the management bought out Kering this January, Ulysse Nardin invited us to a Vertical Odyssey at the Watches and Wonders 2022 with three novelties: the Moonstruck (already announced in February), the first double oscillator Freak S, and the Freak X with aventurine.Girls don’t just wanna have fun – Part 23, Watches and… In this series we showcase mechanical and artistic wonders that were especially designed for women and others originally for men that come alive on spirited ladies’  wrists. We participated at the Watches and Wonders 2022 and we browsed a few novelties.