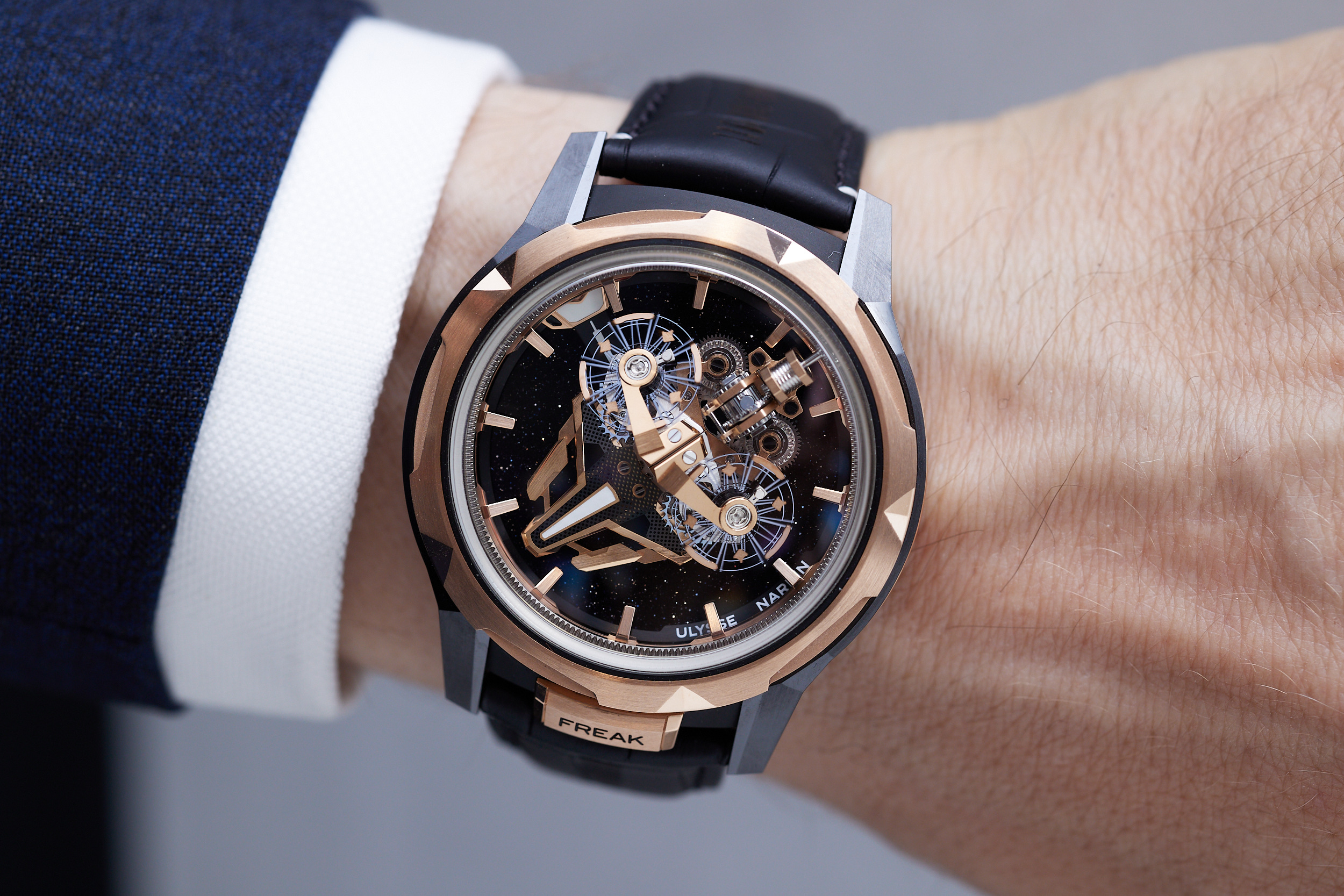 At the first show appearance since the management bought out Kering this January, Ulysse Nardin invited us to a Vertical Odyssey at the Watches and Wonders 2022 with three novelties: the Moonstruck (already announced in February), the first double oscillator Freak S, and the Freak X with aventurine.

Kering reported the sale of Ulysse Nardin (as well as Girard-Perregaux) to its management a few months ago on 24 January, 2022. The two companies, headed by Patrick Pruniaux since 2018, have been sharing some corporate functions but their product lines are vastly different. ‘On the sound foundations laid thanks to Kering’s support and investments, we have the right setup and resources to implement a plan capable of ensuring the long-term development of both brands’ – he declared, which is important for a successful lift-off.

Perhaps symbolic, but Ulysse Nardin chose the theme of a Vertical Odyssey to showcase their novelties at the Watches and Wonders. However, it is no coincidence that they presented 3 models on this occasion that could not be more Ulysse Nardin.

Dr Ludwig Oechslin, archeologist, philosopher, historian of theoretical physics and astronomy and not least the partner of Rolf Schnyder in reviving Ulysse Nardin during the ‘80s and ‘90s, has been known for his astronomical timepieces that are nourished by his fascination for these disciplines and his engineering skills. Between 1980 and 1992, he created the Trilogy of Time – a series of astronomical timepieces: Astrolabium Galileo Galilei (inspired by the astrolabe, the multi-function ancient astronomical handheld device in 1985), Planetarium Nicolaus Copernicus (planets of the solar system in Copernicus’ heliocentric view in 1988), and Tellurium Johannes Kepler (showing the relative position of the Earth, the Sun and the Moon from the Earth’s point of view in 1992).

It was in 2009, when the first Ulysse Nardin Moonstruck came out following up on the Tellurium Johannes Kepler model. With its design, Dr Oechslin’s aim was to simplify the display of the vast information presented. For example, as opposed to the Tellurium, which had the painted Earth on a rotating disk, the Moonstruck had fixed the Earth’s (the user’s) position making it easier to navigate. In 2017, an Executive edition appeared with a world time function and pushers for instant time zone adjustment.

In 2022, the manufacture issued a new black version of the Moonstruck. The functions and the movement (the UN-106) are the same as in the 2017 Executive Moonstruck WorldTimer. The local time hand can be advanced and receded by the pushers at 8 and 10 o’clock. 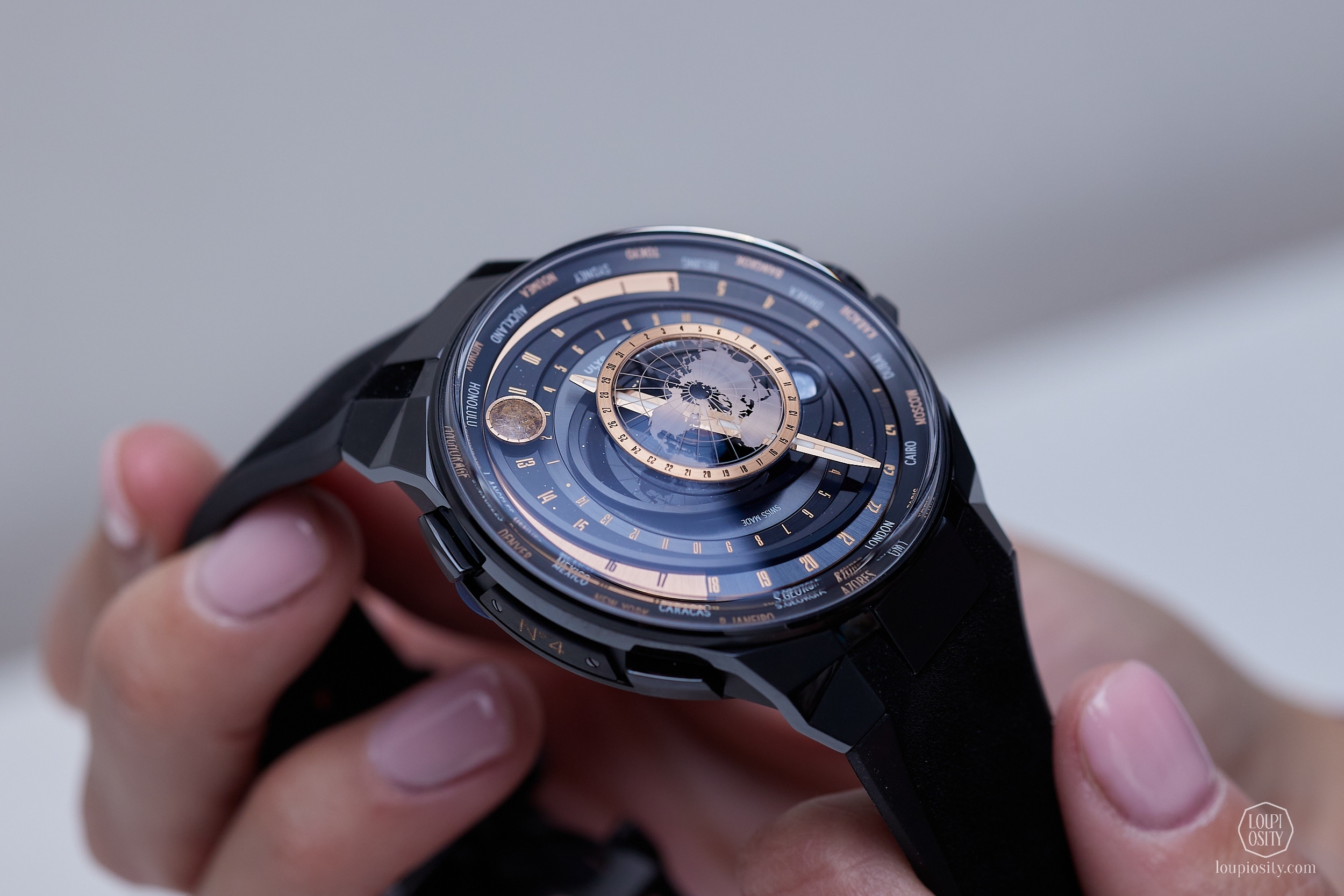 The Northern Hemisphere is viewed from the North Pole and a 31-day date ring is etched inside the domed sapphire. Similarly, the cities referencing the 24 time zones are placed on its outer flange. The Sun (made of bronzite, a ferriferous variety of magnesium silicate), rotating in 24 hours marks noon in the city it appears next to, while the rest of the numbers on this ring show the hours at the respective cities. The golden / black colours represent the separation of day and night. 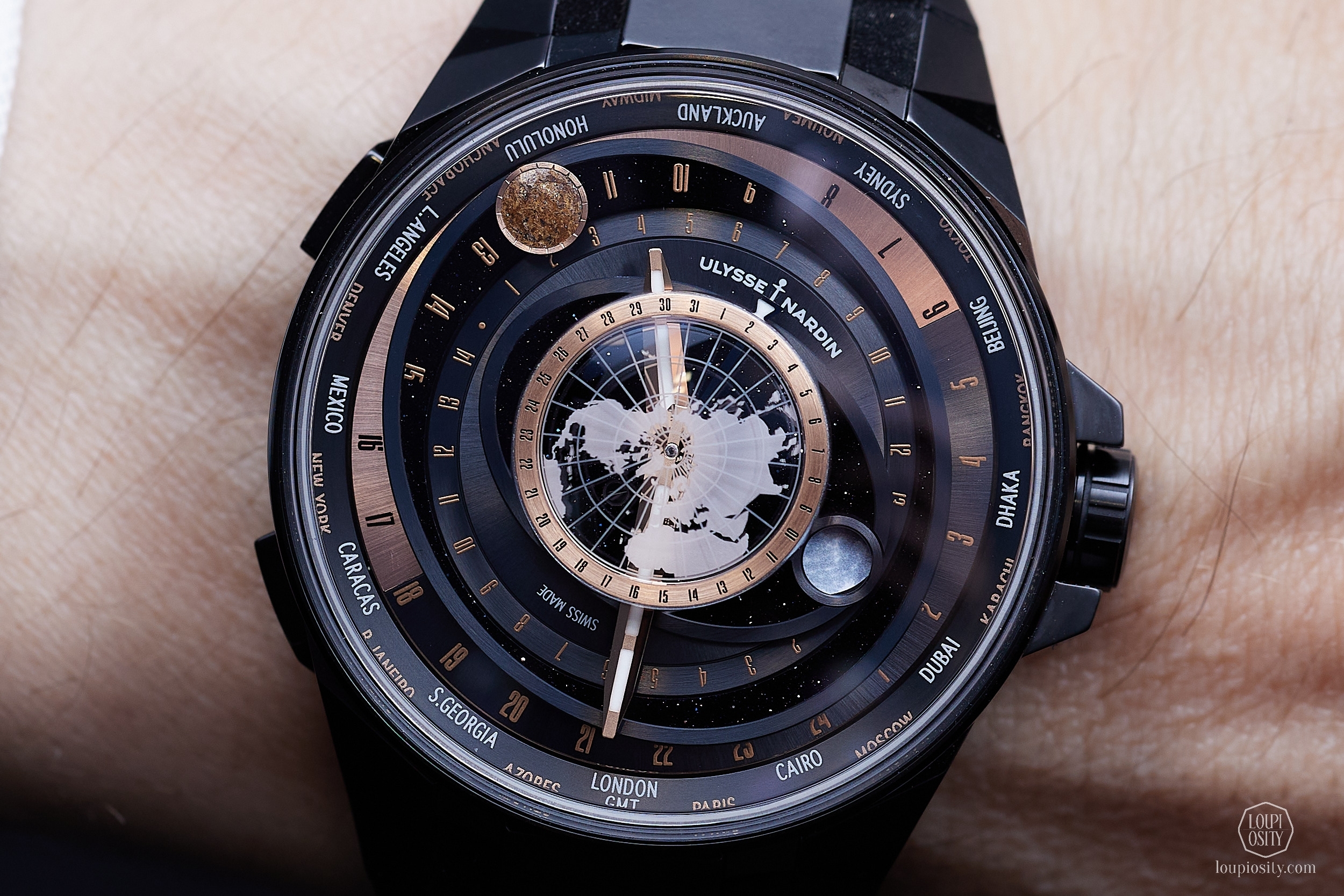 Unlike the Sun, the Moon’s surface is not an appliqué, but its periodic waning and waxing is depicted as a sinusoidal on a disc under the Moon’s aperture. This disk rotates with the Sun, once every 24 hours. The aperture is carried by a ring, and it shifts back ca. 12 degrees each day. Every 29,53 days (the average time between two new / full moons) the Moon aperture returns to the same relative position to the Sun. The age of the Moon, aka the shift between the Sun and the Moon ring can be read by the number shown on the Moon ring next to the Sun at any point in time. The positions of the Sun and the Moon indicate high tides too: when they align or are at the opposite ends it is spring tide (higher than usual), when they are at a 90 degree angle it is neap tide (lower than usual).

The production of the watch in the 45mm ceramic and black DLC-treated titanium Blast case will be annually limited. 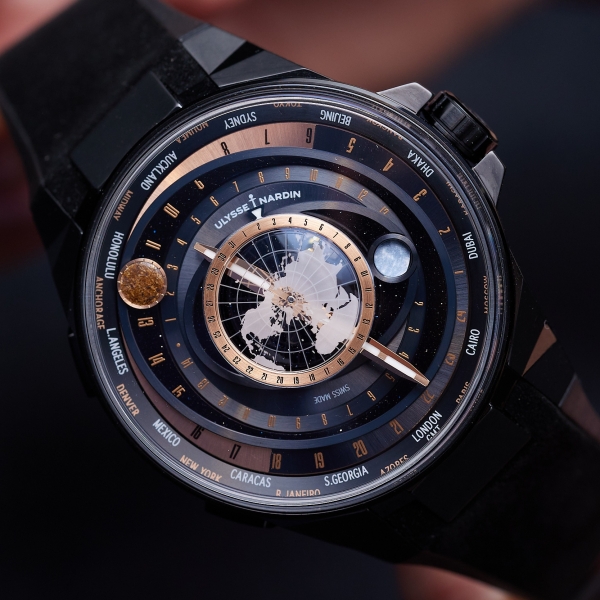 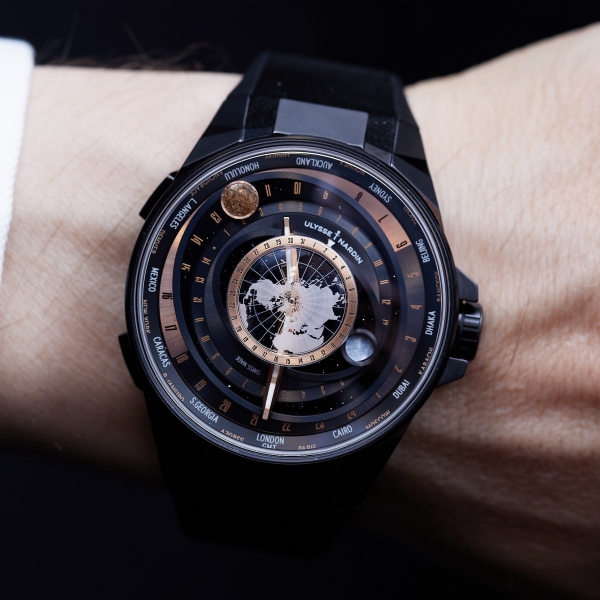 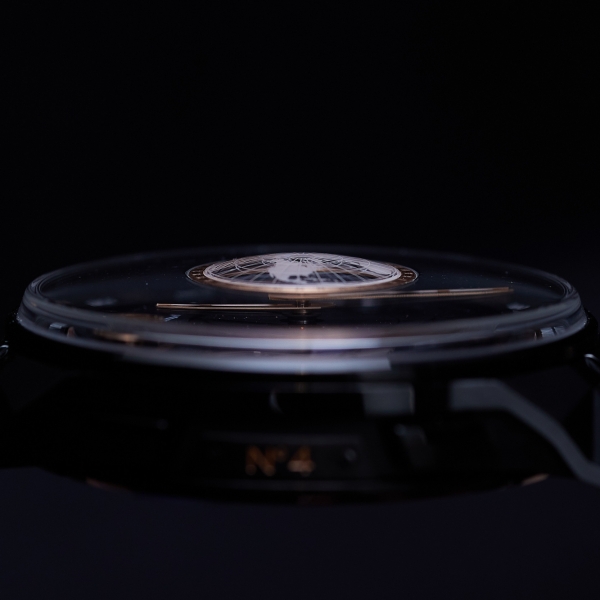 Freak S is a direct descendant of the Freak Vision and it boasts two balance wheels connected by a differential operating on the same carousel movement. This is the first time the manufacture has employed a double balance on the Freak, the rate of which is averaged out by the vertical differential. The whole structure of the rotating UN-251 movement makes the already futuristic Freak even more so. The large silicium balance-wheels with inertia-blocks beat at 2.5 Hz and are inclined by 20 degrees to each other. The escapement’s silicium components are coated with a plasma technology called DiamonSIL Ulysse Nardin developed at Sigatec, a joint venture between Ulysse Nardin and Mimotec since 2006. It helps improve performance and the resistance of moving parts to abrasion and impacts.

The hours are pointed out by an arrow covered with Super-LumiNova® while the narrower end of the entire carousel points to the minute.

It is an automatic calibre using the silicon ‘grinder’, a monolith square-in-a-ring shape, which was designed to ‘shake’ at the smallest wrist movement. The performance of the winding mechanism is very good, which is paired with a decent 72-hour power reserve.

The movement is set in a 45mm black ceramic, black DLC titanium and 5N rose gold case with a gold bezel. Behind the carousel, an aventurine glass gives the impression of the endless space.

The model is limited to 75 units. 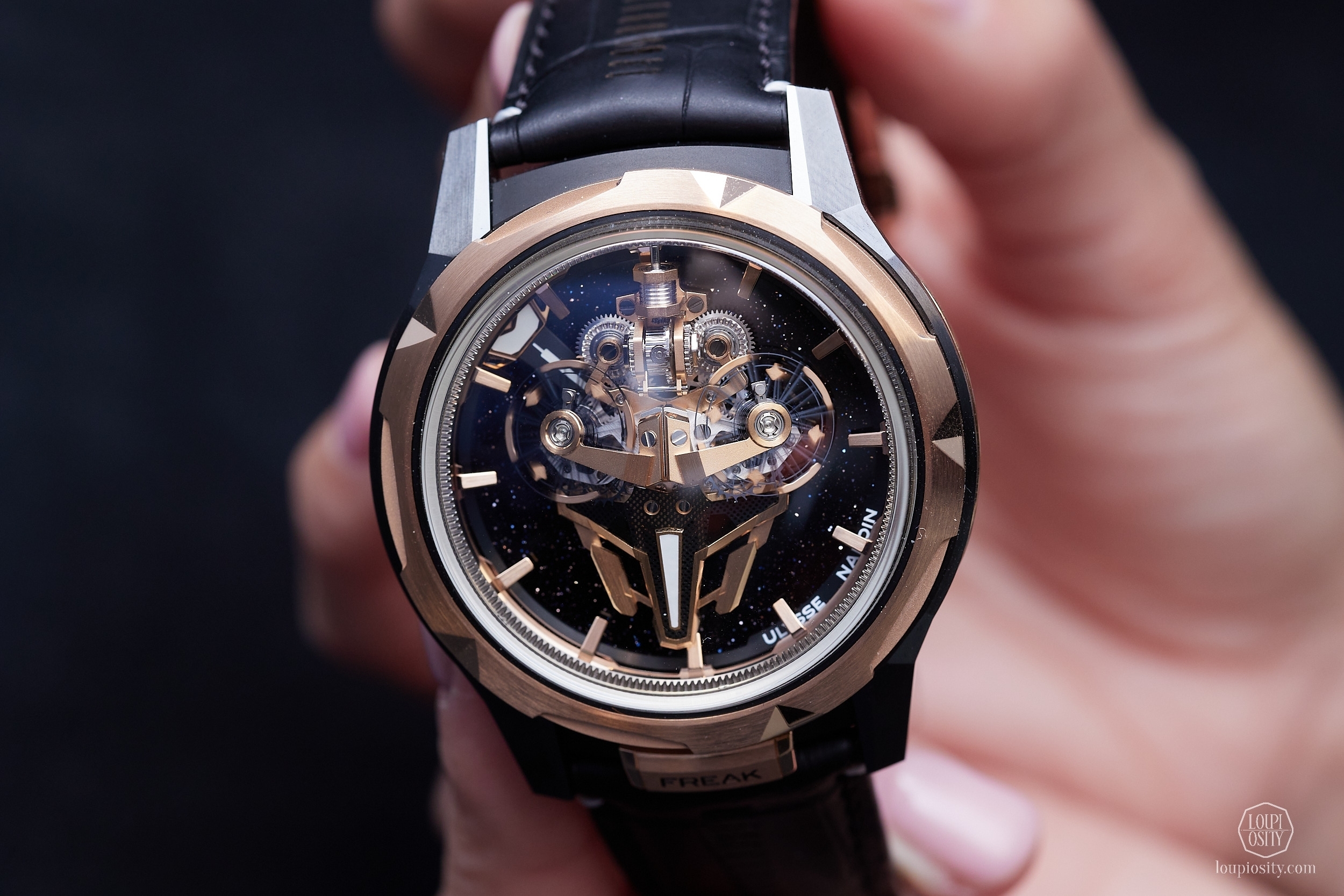 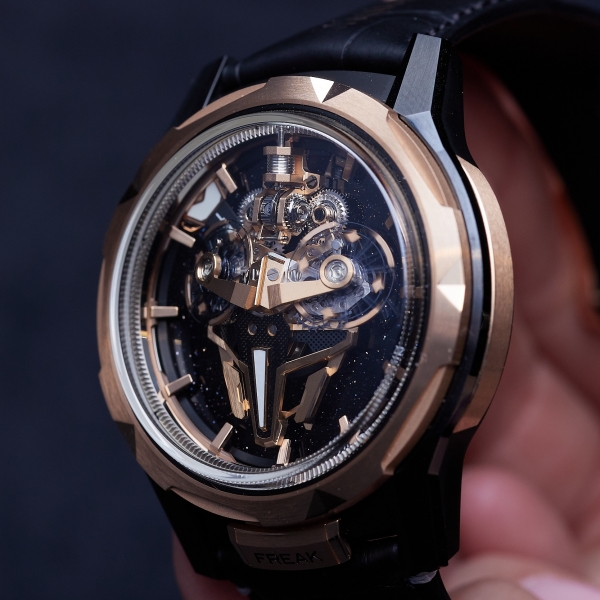 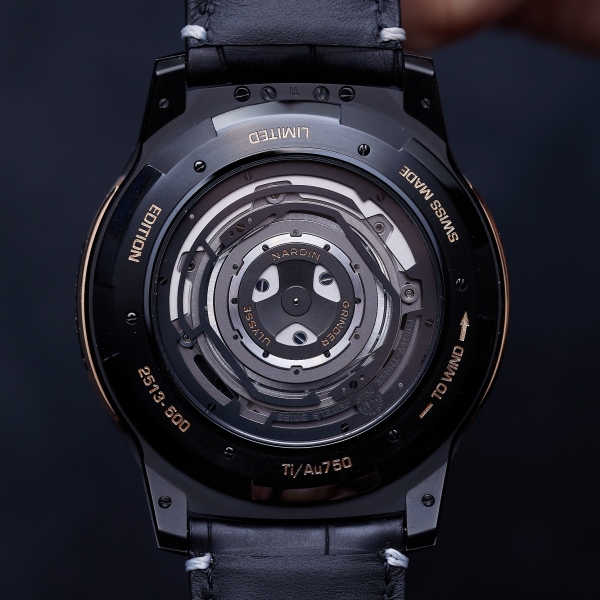 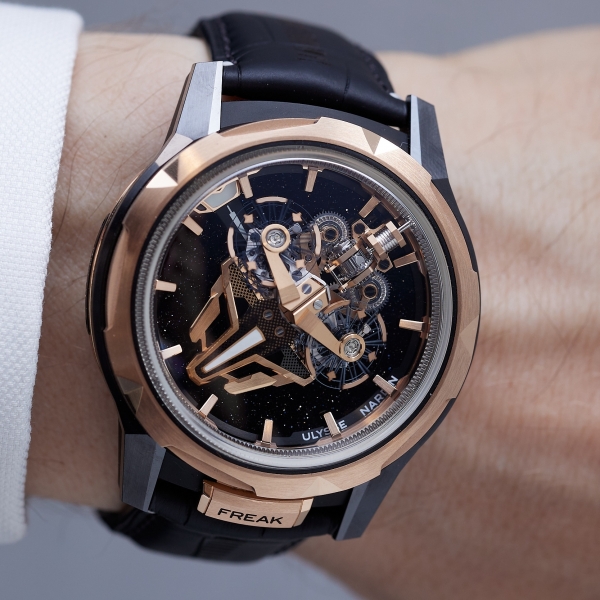 Another Freak was introduced in the less complicated Freak X line. Gold and aventurine provide a great setting for the large balance wheel of the UN-230 automatic movement. This glass is dark blue matched with the alligator strap and the blue PVD titanium / 5N rose gold 43mm case.

The model will be limited to 99 pieces. 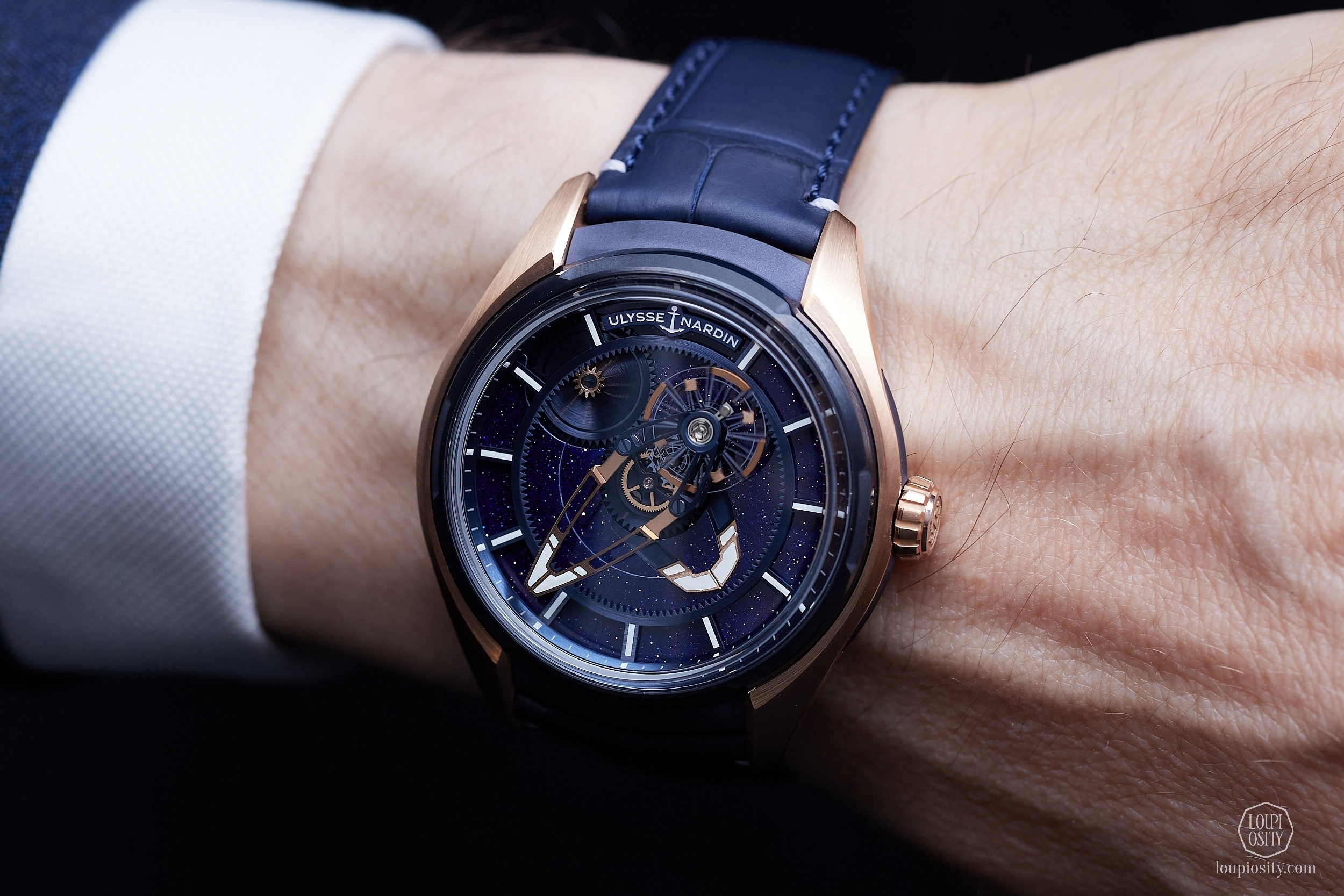