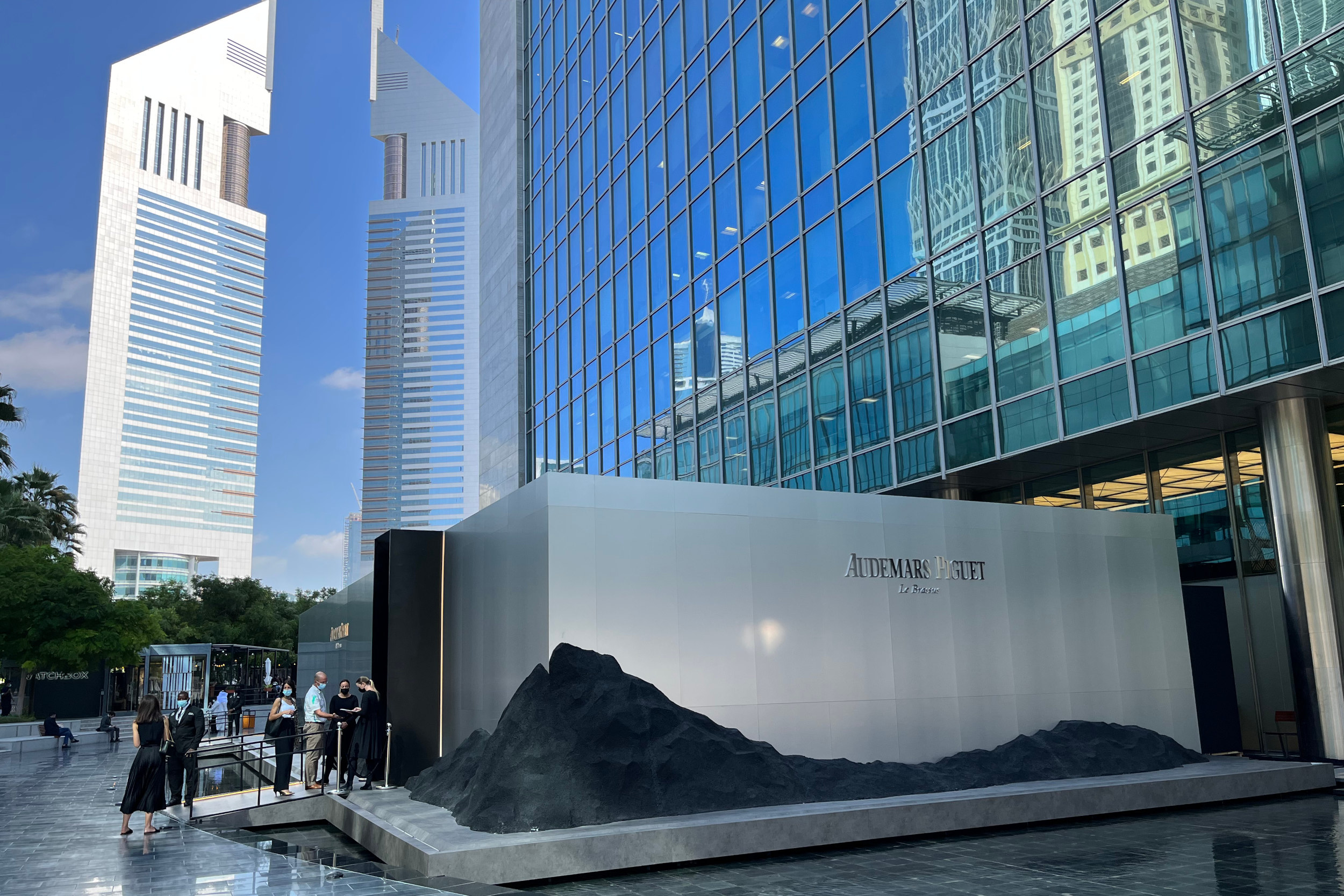 Audemars Piguet took part in the 5th edition of the Dubai Watch Week from 24 to 28 November 2021 at the Gate in the Dubai International Financial Centre with a booth and exhibition space, dedicated mainly to the Royal Oak Offshore.

Audemars Piguet and Rolex had a significant, instantly visible and highly admired presence at the Dubai Watch Week this year – both brands built a big booth outside of the Brands Exhibition area, with their own ‘gallery-section’ and even a place to chill and have a coffee with other brand lovers. 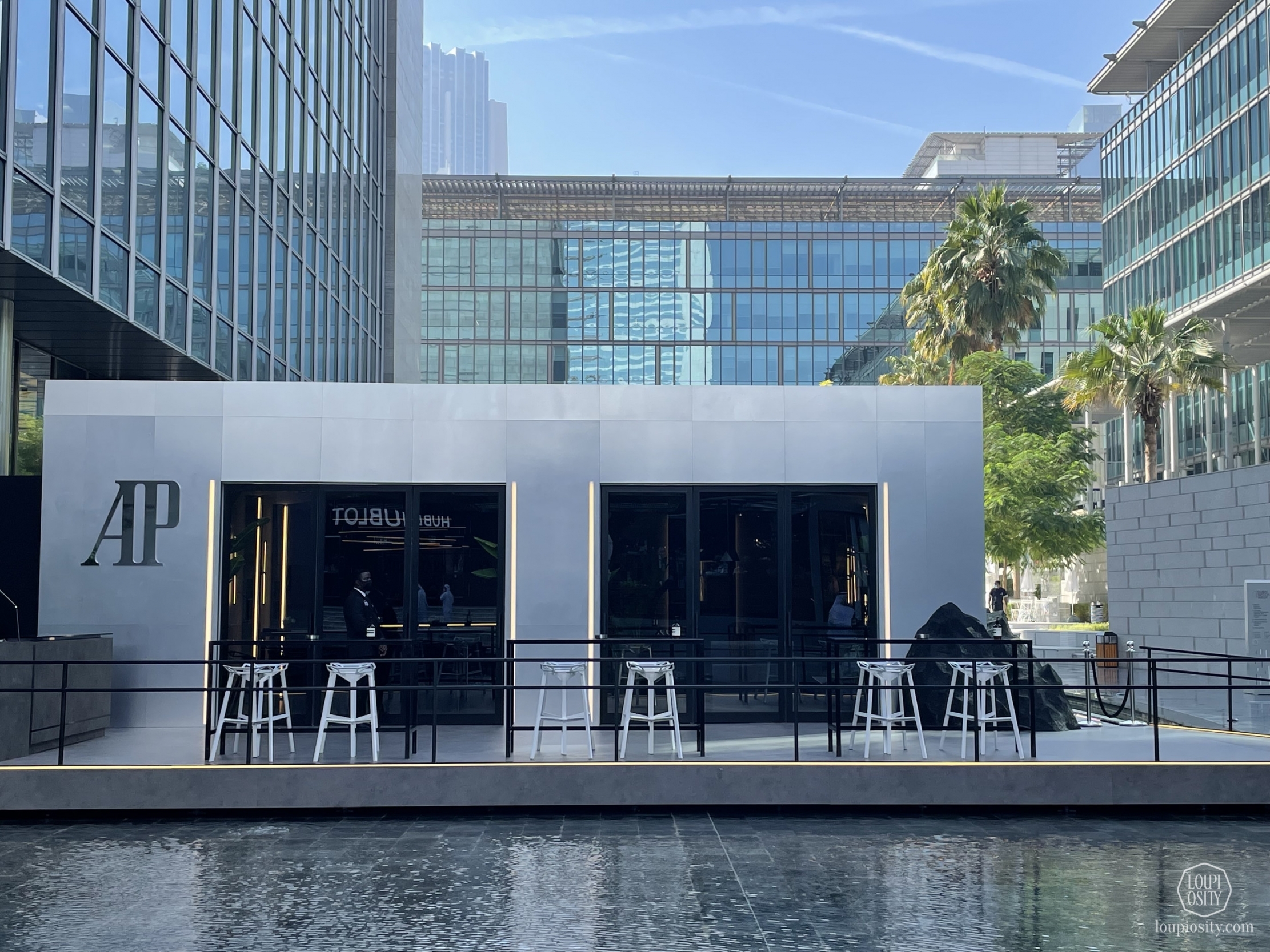 Audemars Piguet’s space hosted a large-scale exhibition, called ‘Beyond the Limits: A Journey through Time, Design and Materials’, with the intention of showing the visitors the Manufacture’s endless quest for innovation. As you entered the booth the first room showed the Royal Oak Offshore – the very recognisable sports watch which has been one of the brand’s main platforms for creative experimentation.

Following the steps of the Royal Oak designed by Gerald Genta – launched in 1972 and ‘shocking’ the finewatchmaking scene with its unusual shape and material – the Royal Oak Offshore has always embodied rule-breaking.

It was born in 1993. The designer was the Geneva-based Emmanuel Gueit, who received much criticism even from Genta. It took some time until even AP started to believe in it so the first 100 pieces only wore “Royal Oak” on the back. The today overused but back then rather original ‘The Beast’ nickname stuck to it instantly due to its unusually large dimensions: this is a 42mm diameter and 14.5mm thick timepiece. Colourful versions exist since Baselworld in 1997, when the manufacture created some to celebrate the original Royal Oak’s 20th anniversary.

The Royal Oak Offshore celebrated its 25th anniversary at the SIHH 2018 with special pieces and an anniversary campaign, the ‘The Future of First’ with LeBron James.

The exhibition allowed visitors to have a solid overview about the many versions that were introduced since its launch: the Royal Oak Offshore Selfwinding Chronograph, the Diver, the Tourbillon Chronograph and the Women Collection – just to name a few. Variations in colours and materials (precious metals, stainless steel, titanium or rubber) have also been characteristic. Special versions were also made such as the ‘End of Days’ Royal Oak Offshore (named after the film ‘End of Days’ starring Arnold Schwarzenegger and with a special bracelet which could fit on the wrist of the action movie superstar) or the Alinghi Team Chronograph in forged carbon, created to the competitive Swiss sailing team and its America’s Cup presence.

The already very free-spirited design of the Royal Oak Offshore allowed Audemars Piguet to be especially experimental with the collection – using new alloys and high-tech materials such as ceramic and titanium or being bold with colours and patterns. 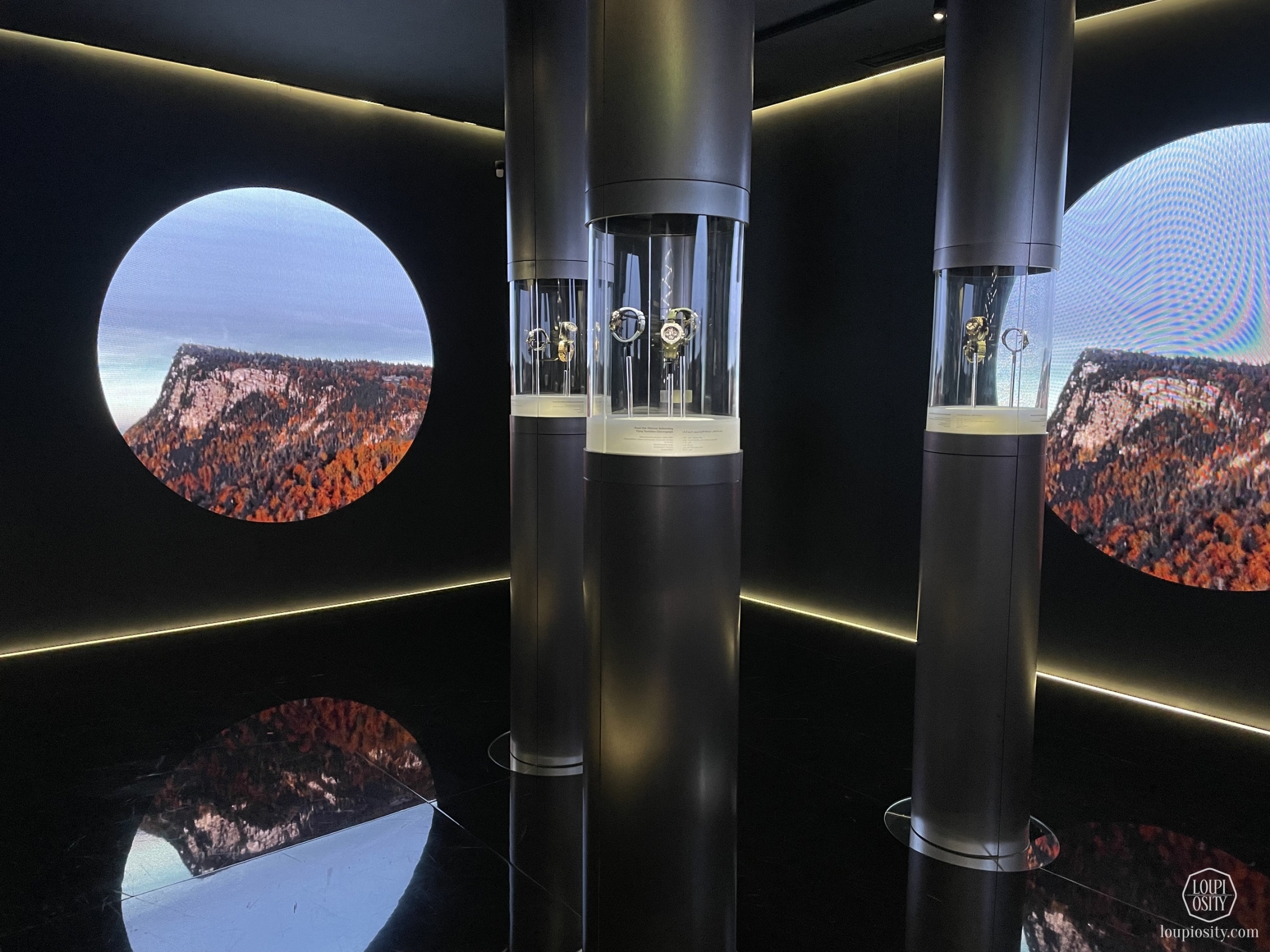 In the second room of the booth we had the chance to see a few exceptional pieces from the Audemars Piguet museum (including a special minute repeater pocket watch) and experience some properties of the materials used in the manufacture. I tried to rasp different materials – clearly failed with the ceramic, since it is very hard to engineer and requires special tools. The ceramic and its special alloys give opportunity to the watch brands to create light but durable watch cases. It is a scratch-proof, heat-resistant and anti-allergic material but it is brittle – if you drop your ceramic watch badly, you can break it. So R&D departments of watch manufactures are keen to create different composites and alloys to create a unique variation of the material, with the best possible properties or ‘borrowing’ materials from other industries. Some new developments are intended for a range of lightweight parts and subsystems for the automotive, aerospace, commercial truck and other markets.

2022 will see the 50th anniversary of the Royal Oak and other important milestones, like opening more AP houses, which are more a private club or a salon, than a retail space, influenced by a strong spirit of contemporary design. There are AP Houses in Hong Kong, Tokyo, Barcelona, Munich, Madrid, London, Milan and one is coming to New York City in early 2022. 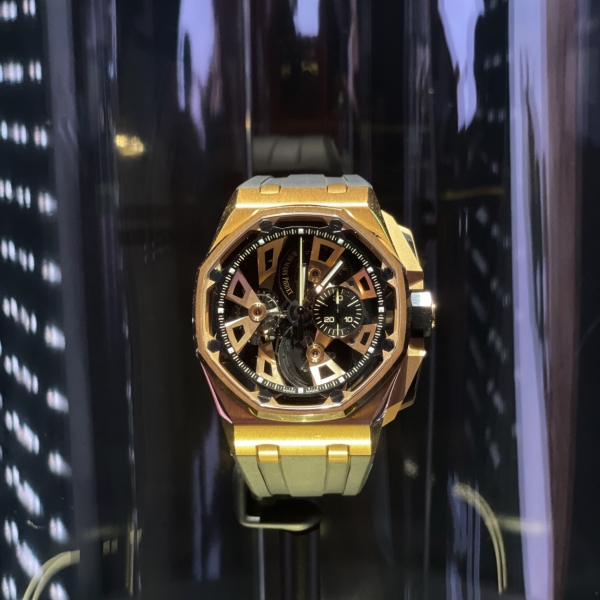 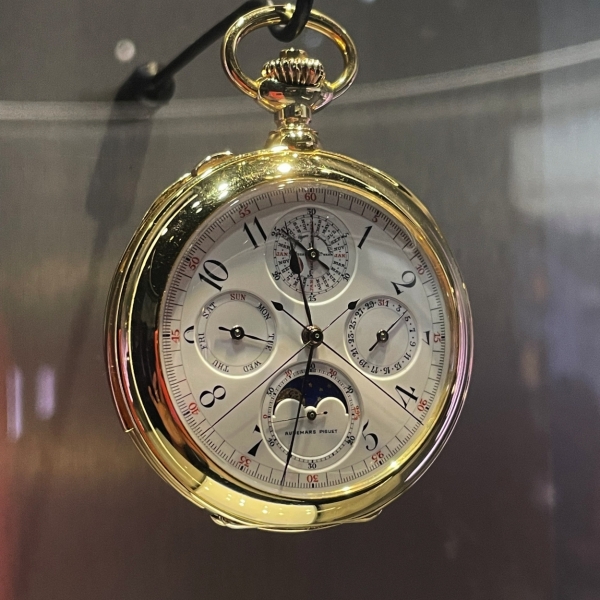 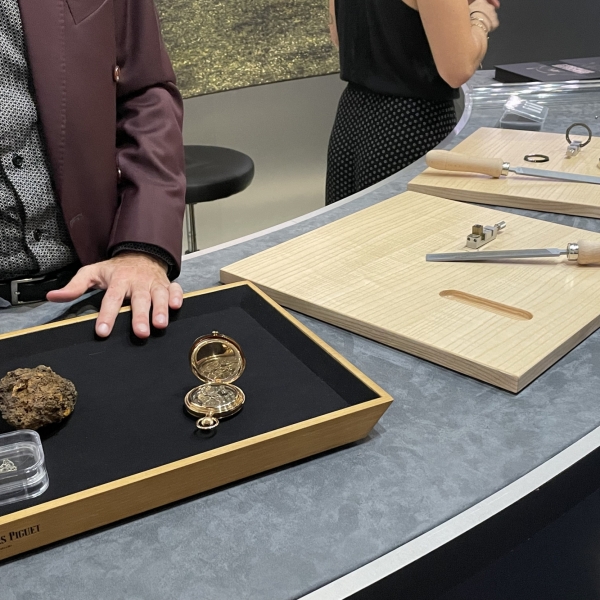 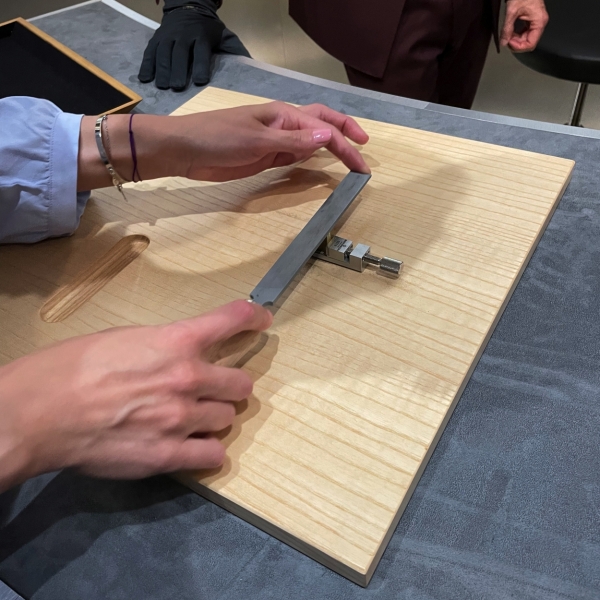 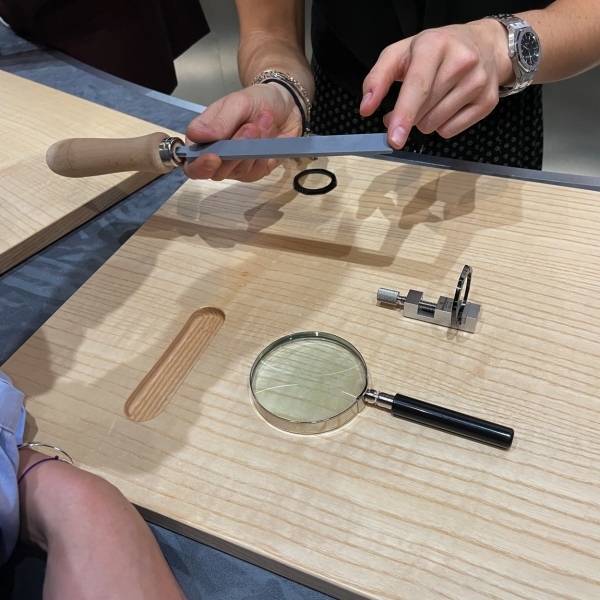 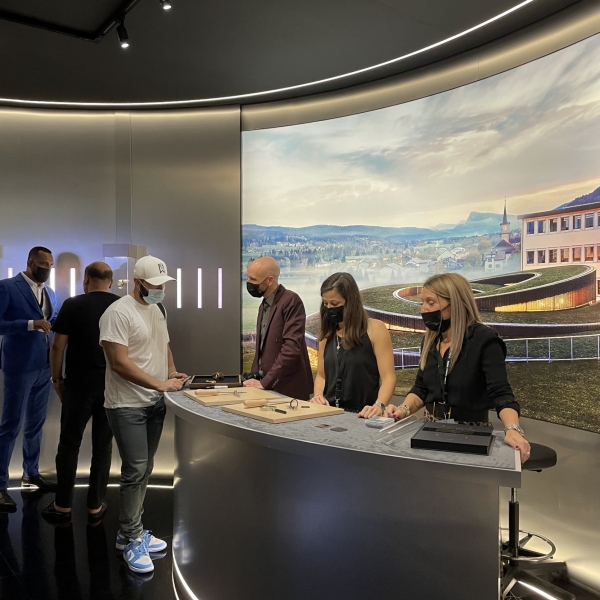 Dubai Watch Week 2021 In the very long months of the pandemic - as any other sector - the luxury industry and the watch brands have been coping with virtual presentations and online product launches. Of course everyone is keen to return to the live events, real personal discussions and not-on-the-Zoom connections. The Dubai Watch Week welcomed a great number of visitors in the sunny…GPHG 2019 The 84 pre-selected watches of the Grand Prix d’Horlogerie Genève 2019 are arriving back from the world tour to Geneva to compete for the ‘Aiguille d’Or’ Grand Prix and the 18 category prizes.Only Watch 2021 The ninth edition of the Only Watch auction will be held 6 November 2021 in Geneva. The selection includes unique timepieces created by the finest brands to support the research of Duchenne muscular dystrophy.