What is the future of the First? 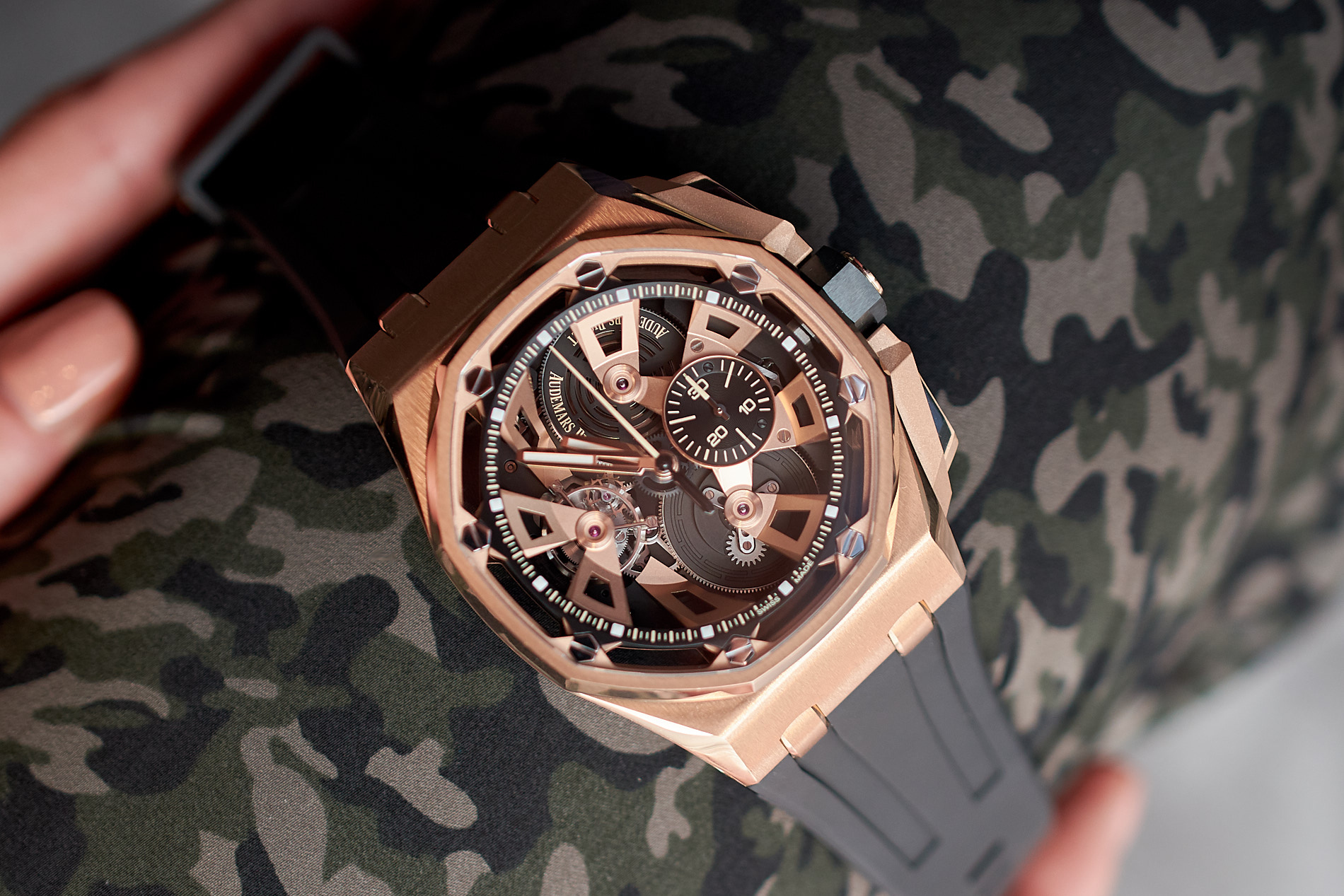 Audemars Piguet is a dominant brand in the world of watchmaking – it always has been. When you say the name today the majority of people immediately associate it with the Royal Oak Offshore, because it is just as bold as the brand. In fact, it has its own brand built up carefully.

I have watched a few interviews and presentations with François-Henry Bennahmias, CEO of AP. He has been with the company since 1994 and he draws up equally definite opinions about things in general. Sometimes even to the extremes – but there is no strong brand without unfaltering leaders, is there?

At the SIHH 2018, AP celebrated the 25th anniversary of the Royal Oak Offshore, which set the fire burning in 1993 and it continues to polarise watch lovers. The anniversary campaign built on the “True First must move forward…” slogan gives the essence of what the series has represented – the indefatigable effort of top performers to defeat their own peccability.

In the interview at the Auditorium of SIHH, François-Henry Bennahmias was asked “…some players have some successes for years, and then they kind of disappear for a year or two and only to return again. How do you manage this discontinuity in your brand ambassadors?” His response reflects how AP sees itself in relation to human performance: “Well, that’s part of everybody’s life – you’re not always great in what you do, you have your ups and downs. That’s a part of being a human brand. That’s about staying with the guys when they go down and going back up with them. And it is exceptional – when you talk to these guys, they say, they don’t compete against the others, they compete against themselves – it’s a mind-set”.

And this mind-set is what AP’s clients can relate to.

Before the novelties, let’s briefly recap the story of the Royal Oak Offshore.

The beginning of the 70’s brought along one of Audemars Piguet’s great icons. “To break the rules, you must first master them” – the motto characterized the Royal Oak collection. In 1972, AP shocked the industry with the series designed by Gérald Genta (a Swiss watch designer, who worked with other firms too, including IWC and Patek Philippe among others). It was not only the size that was far larger than what was in vogue at the time, but the models also came in an unusual shape. The main characteristics include an octagon-shaped bezel and eight hexagon screws, a tapisserie-patterned dial and deeply bevelled edges. The stainless steel used for the case was even spookier, but the whole package eventually established a new high-end sports watch category.

In 1976, Jacqueline Dimier, Audemars Piguet’s Head of Design – who is one of the very few female watch designers – created the first Royal Oaks for women.

The Royal Oak Offshore was born in 1993. The designer was the Geneva-based Emmanuel Gueit, who received much criticism even from Genta. It took some time until even AP started to believe in it so the first 100 did only wear “Royal Oak” at the back. The today overused but back then rather original “The Beast” nickname stuck to it instantly due to its unusually large dimensions: this is a 42mm diameter and 14.5mm thick timepiece. Colourful versions exist since Baselworld in 1997, when the manufacture created some to celebrate the original Royal Oak’s 20th anniversary. Gueit’s talent is even more visible when you put models from the other extremes next to the ROO, such as the AP Millenary or Rolex’s Cellini – all designed by him.

Since then many version were introduced; the Royal Oak Offshore Selfwinding Chronograph, the Diver, the Tourbillon Chronograph and the Women Collection – just to name a few. Variations in colours and materials (precious metals, stainless steel, titanium or rubber) have also been characteristic. Special versions were also made such as the “End of Days” Royal Oak Offshore (named after the film “End of Days” starring Arnold Schwarzenegger) or the Alinghi Team Chronograph.

LeBron James, aka KingJames is a superstar American professional basketball player for the Cleveland Cavaliers. He has won three NBA championships, four NBA Most Valuable Player Awards and many others. LeBron is not only a mega athlete but he also created an outstanding personal brand around himself that includes making friends with Audemars Piguet. In 2013 he received his own dedicated “Royal Oak Offshore Chronograph LeBron James” edition – featuring a 44mm case in rose gold, titanium, and ceramic (with a chronograph push-piece at 2 o’clock set with diamonds) limited to 600 pieces.

After the launch in 1993, “the re-edition celebrates the essence of the original piece, applying the knowledge and technique of 2018” – as AP sums it up. The classic includes a stainless steel case and bracelet with AP folding clasp, a blue “Petite Tapisserie” patterned dial, blue rubber crown and push pieces and it’s powered by the self-winding Calibre 3126 / 3840.

The “Beast” was very bold and disruptive at the time of its first release but nowadays we have many daring, sometimes even disturbing designs in the fine watch space.

So beside the Chronograph re-edition, Audemars Piguet presented a brand new 45mm Tourbillon Chronograph, in steel and pink gold, limited to 50 pieces each. It combines the new architectural construction with an optical illusion – the sandblasted titanium bridges are framing the movement, which seems as if was suspended from the bezel. The calibre 2947 has the functions of tourbillon, chronograph, 30-minute counter, seconds counter, hours and minutes.

So what’s your future? 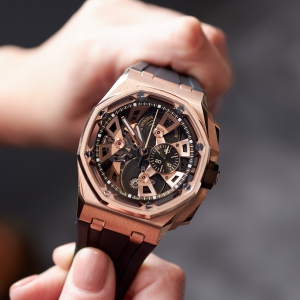 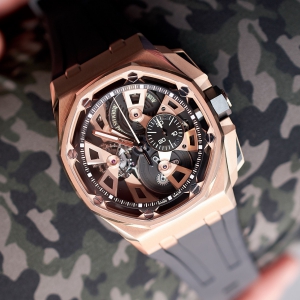 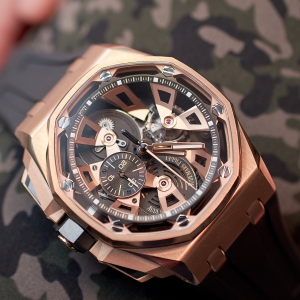 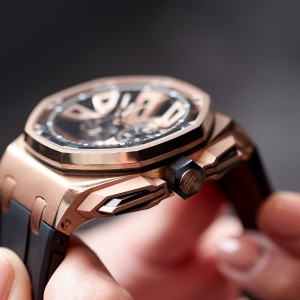 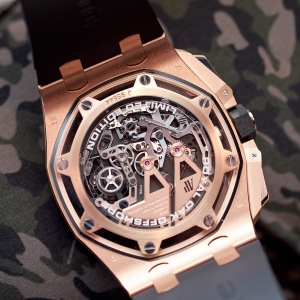 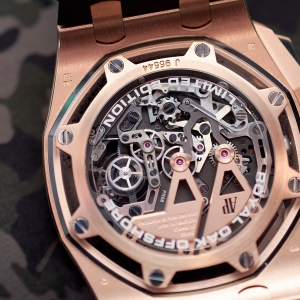 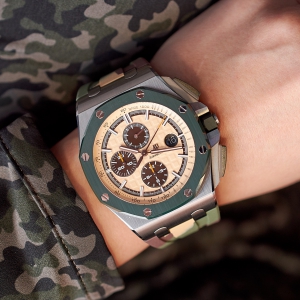 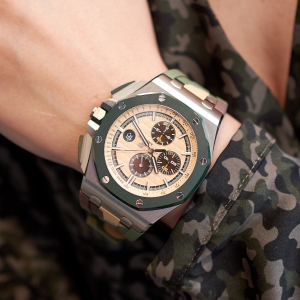 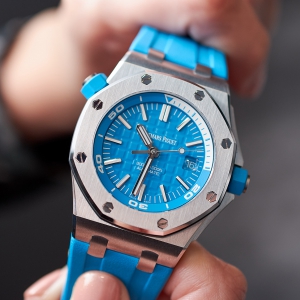 Audemars Piguet at the Dubai Watch Week 2021 Audemars Piguet took part in the 5th edition of the Dubai Watch Week from 24 to 28 November 2021 at the Gate in the Dubai International Financial Centre with a booth and exhibition space, dedicated mainly to the Royal Oak Offshore.De Bethune: The Art of Watchmaking De Bethune celebrate its 20 years’ milestone with an extraordinary book written by Arthur Touchot and published by Assouline, capturing the spirit of the company.Paris+ par Art Basel Paris+, by Art Basel is the newest fair for Modern and contemporary art, taking place October 20-23, 2022 in the French capital.