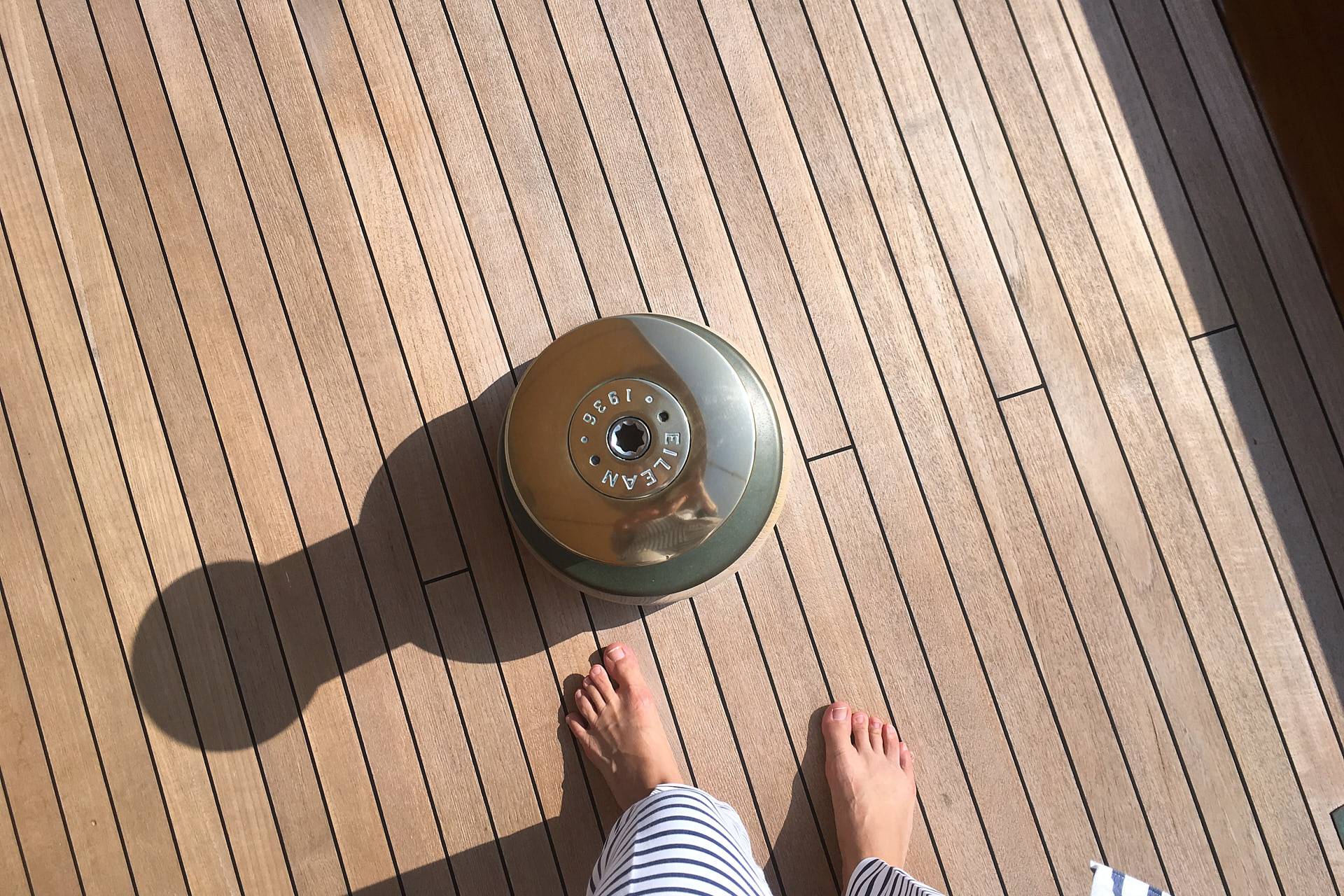 Moored on the shores of the Venetian San Giorgio Maggiore island, here she is: the Eilean. The beautiful 1936 Bermudan ketch proudly promotes Scottish pre-war design combined with boatbuilding skills, Italian restoration craftsmanship and former Panerai CEO Angelo Bonati’s inexorable drive to save her. I stepped on her deck during the Homo Faber 2018.

Located in the former San Giorgio Benedictine monastery in the heart of Venice, Fondazione Giorgio Cini welcomed the first ever Homo Faber between 14-30 September 2018. The outstanding event is organised by the Michelangelo Foundation and it offers a journey through diverse regions of beauty created by Europe’s finest masters. Like a kid in the candy store, we walked around the creative spaces and exhibitions for three days.

I have seen the Eilean on photos and videos so many times – the transcendent spirit of the yacht has been a VIP at almost all Officine Panerai events I have attended from Geneva to Vienna. Being totally amazed by the majestic hull with the double-mast crown, I remember picturing the effortless pen strokes of the designer back in the 1930s.

Eilean was the daughter of the then 80-year old William Fife, the third generation of Scottish yacht builders from Fairlie, North Ayrshire. He was one of the most renowned leisure and racing yacht builders of his time, who became appointed Officer of the Order of the British Empire in 1919 and was also included in the America’s Cup Hall of Fame in 2004. He had built two America’s Cup contender boats for tea magnate Sir Thomas Lipton. Eilean’s narrow body at the waterline and the mainsail pushed far back towards the stern are borrowed from these racing yachts, although this lady was never intended to contest. It does today though, but only with fellow reborn mermaids at the Panerai Classic Yachts Challenge regattas. 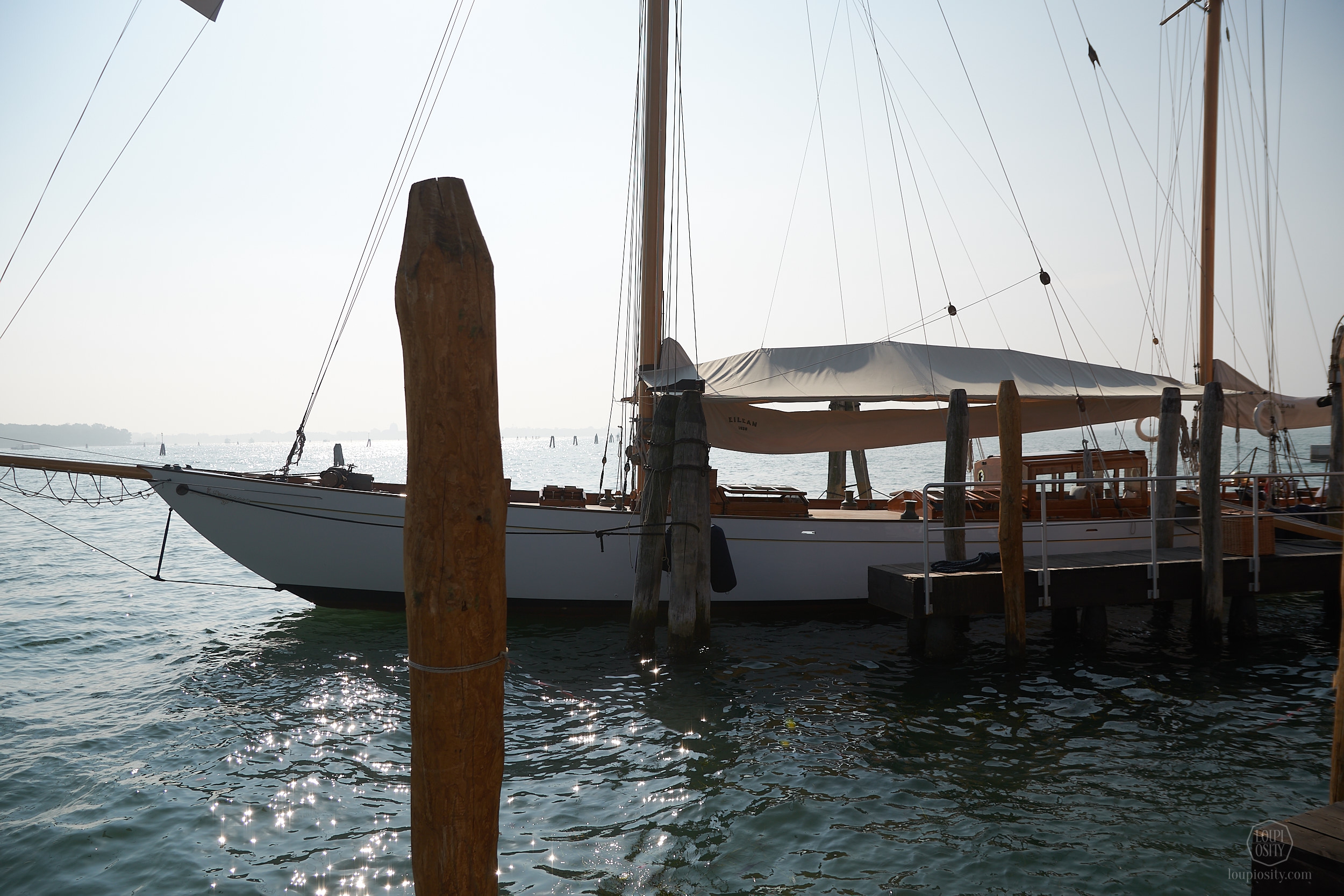 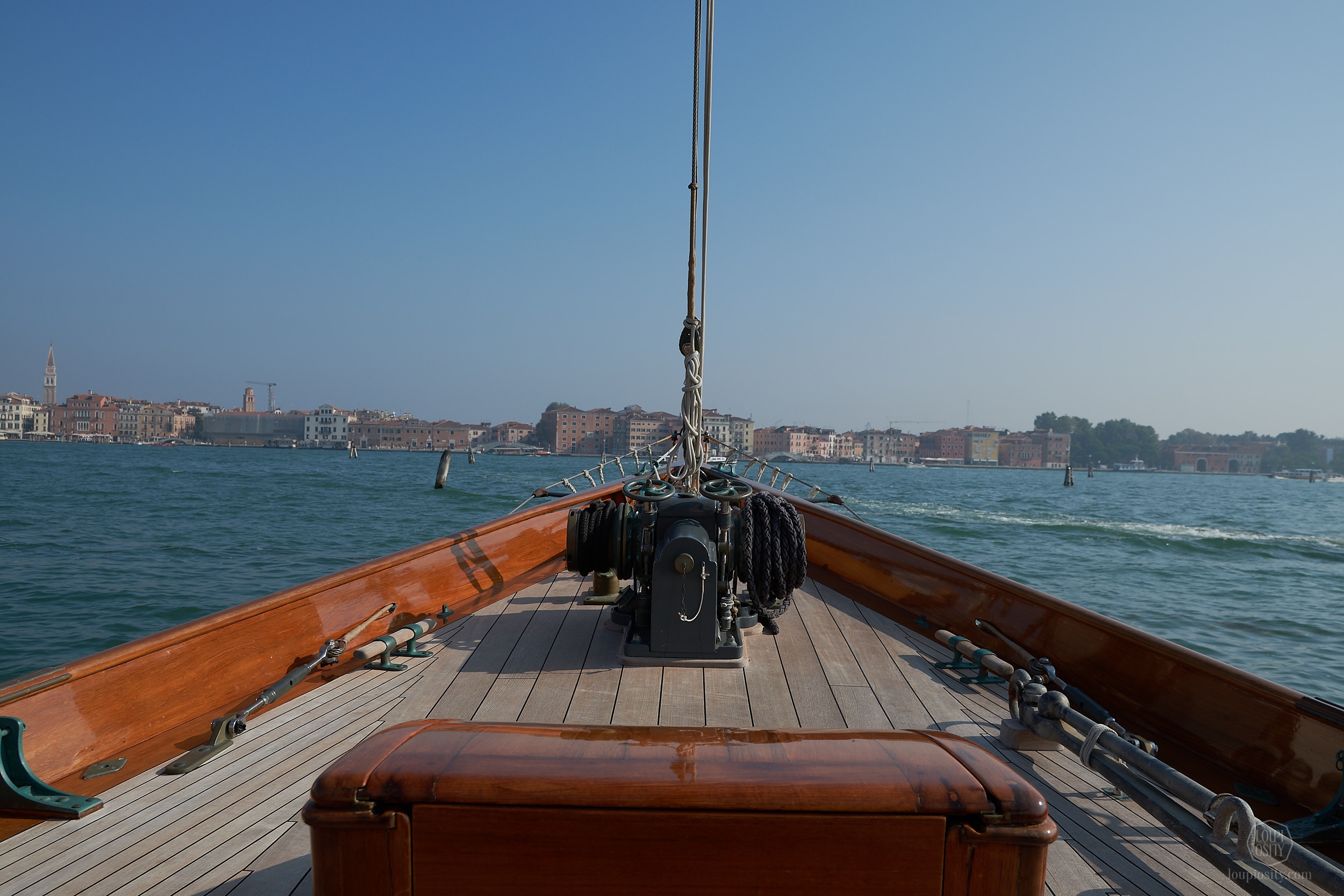 Standing on her main deck now is quite unbelievable. I feel that my senses are cheating me by compressing Venice’s noise into a minor distant radio murmur. I hear the soft splashing of the waves and see the glittering water surface bouncing around the cigar-shaped structure zealously to the same rhythm. Apropos beats… I got to learn that Duran Duran’s ‘Rio’ was shot on the Eilean in 1982, when the yacht served as a charter cruiser in the Caribbean. The owner then was the Antigua resident John Shearer, who as a child had sailed on the Eilean by the side of his uncle. When he rediscovered the boat in Malta in 1974 he bought it. He used Eilean as a living boat and beyond cruising the Caribbean, he crossed the Atlantic more than a dozen times. During her eventful life, the Eilean made this trip 36 times altogether. Unfortunately on a trip from Porto Cervo to Antigua in 1984 a ferry collided with her in the port of Malaga. In spite of the damage Mr Shearer reached his final destination. In Antigua he decided to undertake extensive repairs by himself, but due to a subsequent sinking and a termite invasion he could not save her.

The Eilean was in a devastated condition when the former CEO of Officine Panerai Angelo Bonati discovered her in 2006. He asked the naval restoration specialist Enrico Zaccagni and the Cantiere Navale Francesco Del Carlo in the Italian Viareggio to help him bring back the Eilean’s former glory as true to the original as possible. 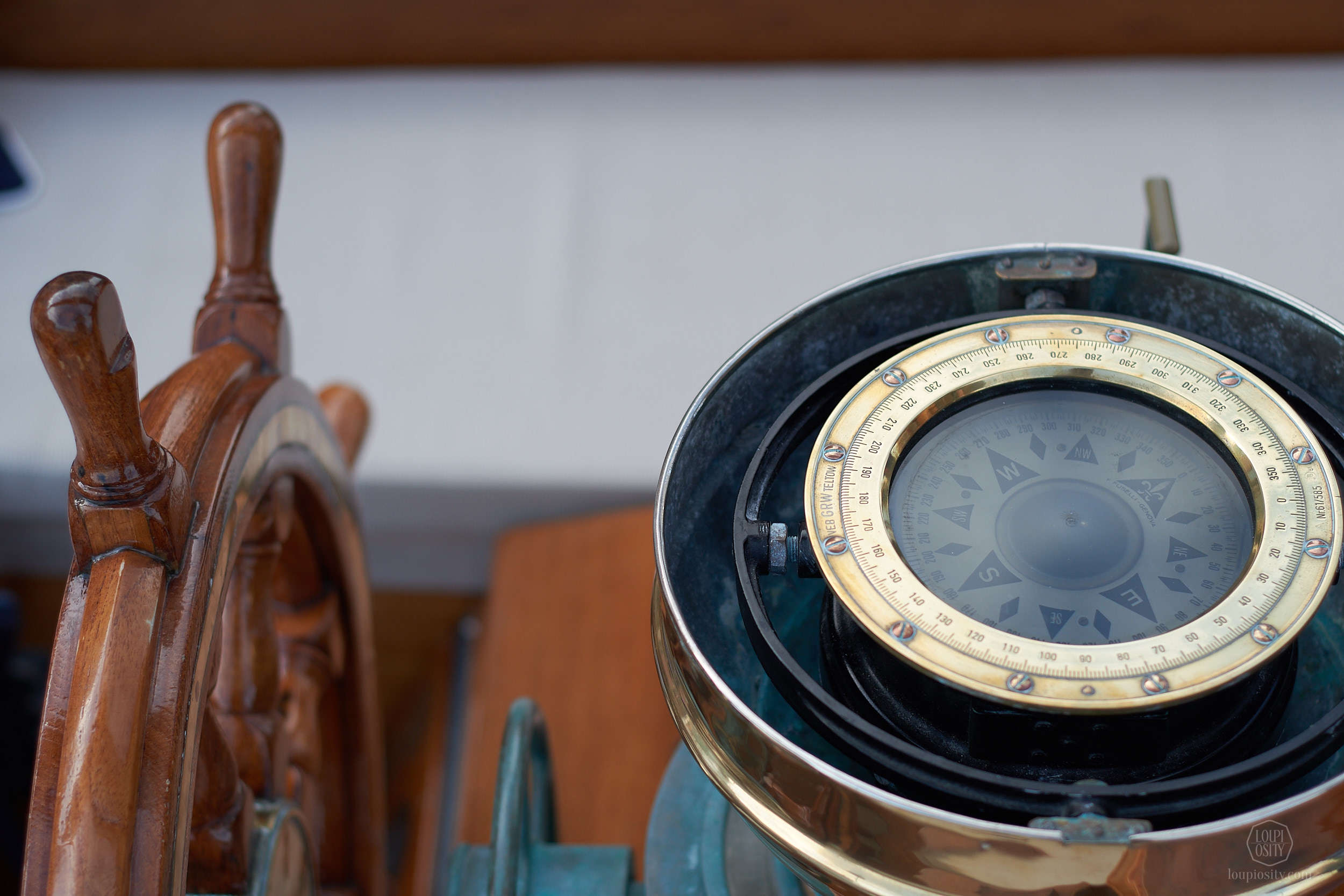 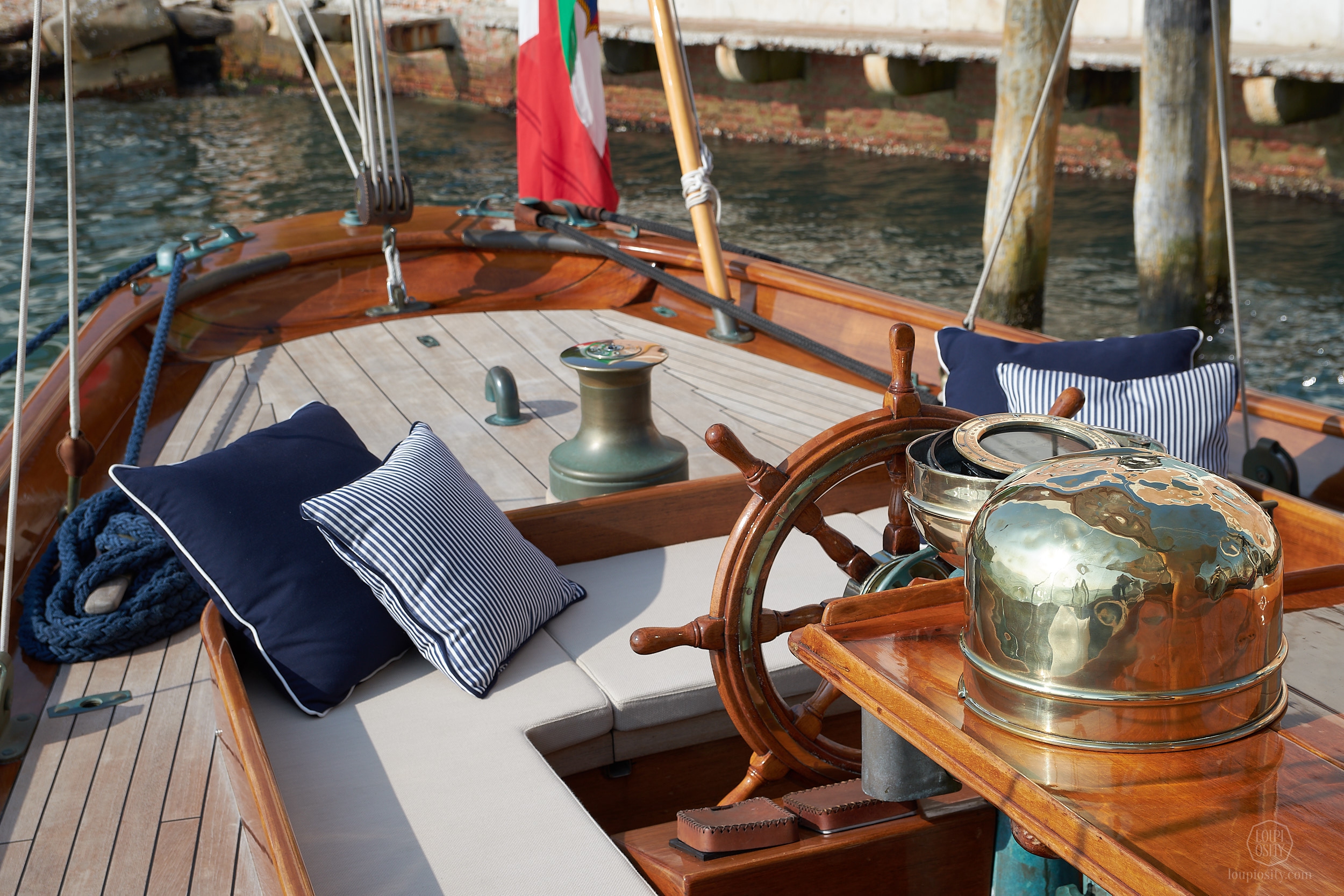 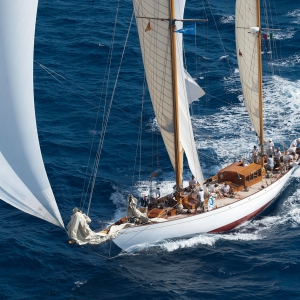 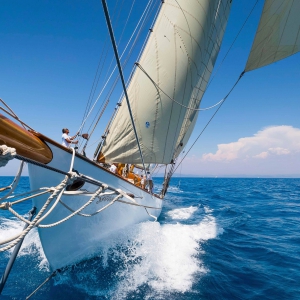 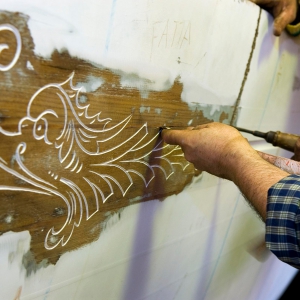 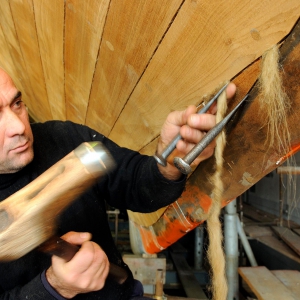 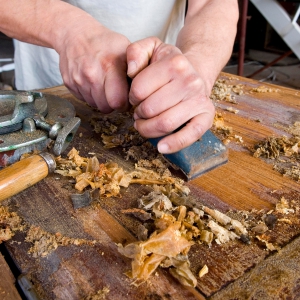 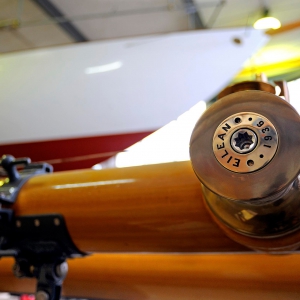 Under my feet the teak boards run in a disciplined order cuddling up to the renewed wooden and metal upper works. I lean down to touch the board and the whole thing feels as if it was alive – the same electricity as on Michelangelo’s Creation of Adam or in the E.T. It is surreal. Most of the Burmese teak in the planking is still the original and even those replaced became wooden screw heads – 5000 of them all over the deck. The steering wheel and the wooden column of the brass compass are from 1936 just like the deck-house. The interior where the termite damage was the most severe had to be replaced. Under the teak skin the boat had zinc-plated metal skeleton, which also had to be exchanged. Both masts were totally rebuilt from a single Alaskan spruce tree. Officine Panerai created unique instruments to their new messenger, including a barometer, a hygrometer, a thermometer, a wall clock and a marine chronometer.

In a world where a new gadget becomes old-school in just a few years and objects are mass-produced and replaced instead of repaired, the example of the Eilean reminds us that owning something also implies the responsibility of taking care of it. This boat, as well as other handmade items, showcased at Homo Faber are precious due to the amount of work and attention that have shaped them. The creator’s drive for utmost quality can be seen in every stitch, which make using them such a different feeling. They are made to last and delight, elevating them from the sea of consumer goods.

Saving a 1936 masterpiece versus buying a faster and technically more advanced yacht is primarily an emotional decision. Just as getting the old family carpet repaired instead of purchasing a new piece. Even though only objects, the many stories they’ve witnessed lend them a personality that make these pieces unique, loved and non-disposable. 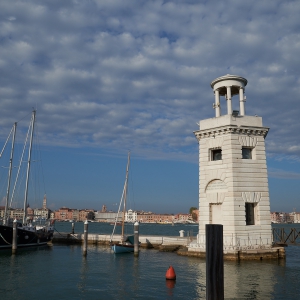 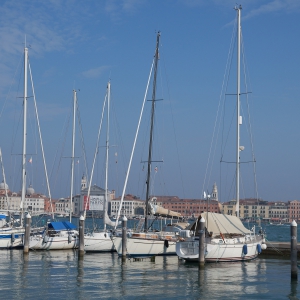 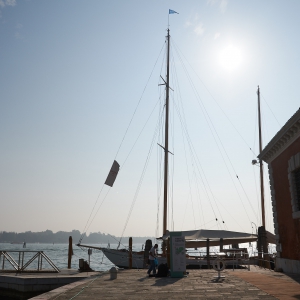 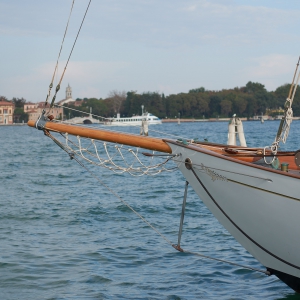 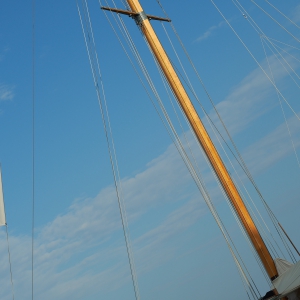 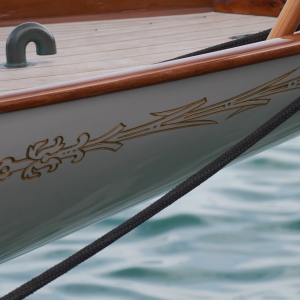 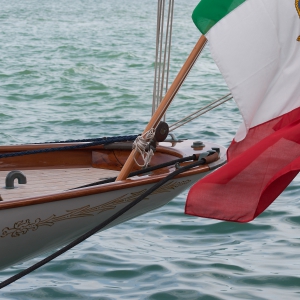 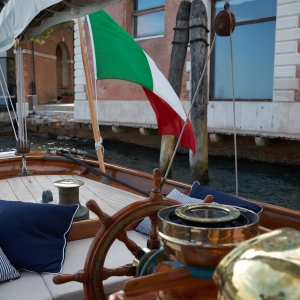 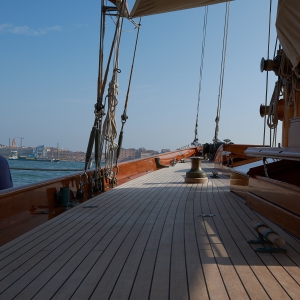 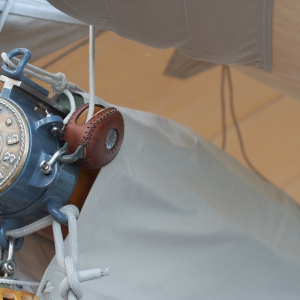 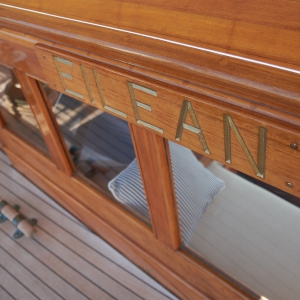 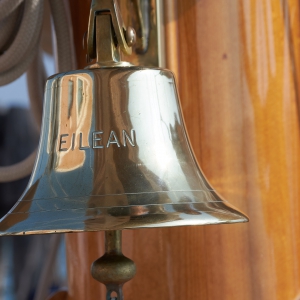 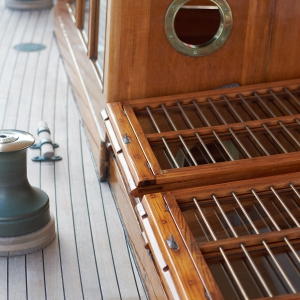 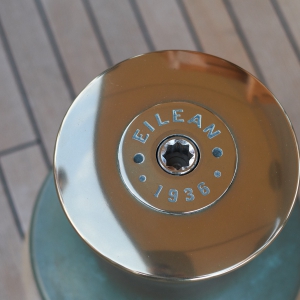 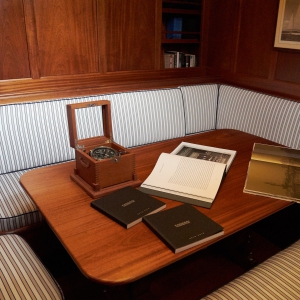 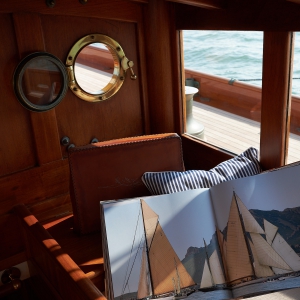 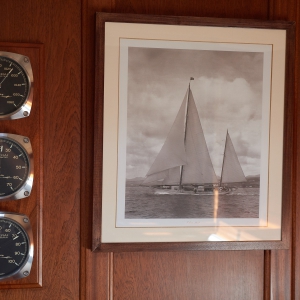 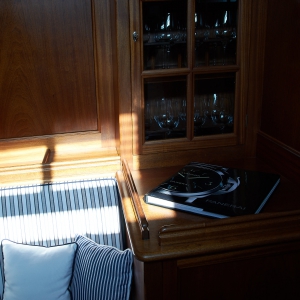 Come, check out other interesting handmade works with us at Homo Faber…

Photo credits: Officine Panerai. Fruzsina Jelen for Loupiosity.com.
The photos were taken at the Homo Faber 2018. All images used for illustrative purposes only. All registered trademarks are property of their respective owners.
All rights reserved.

Homo Faber 2022 The motto - ‘Crafting a more human future’ - of Homo Faber reflects the dedication for the beauty of creation, and the amazement of the ever-curious free mind. The Homo Faber opened its gates on the island of San Giorgio Maggiore between 10 April - 1 May, 2022.'Details: Genealogies of Ornament' - Homo Faber 2022 The ‘Details: Genealogies of Ornament’ is set in the Nautical School area at Fondazione Giorgio Cini. It is one of 15 exhibitions that comprise the Homo Faber Event 2022, organised by the Michelangelo Foundation. Panerai at Watches and Wonders 2021 At this year’s Watches and Wonders Panerai presented new Luminor and Submersible timepieces and with their new IOC-UNESCO cooperation the Neuchâtel-based manufacture reinforces its commitment to a sustainable environment and a healthy ocean.