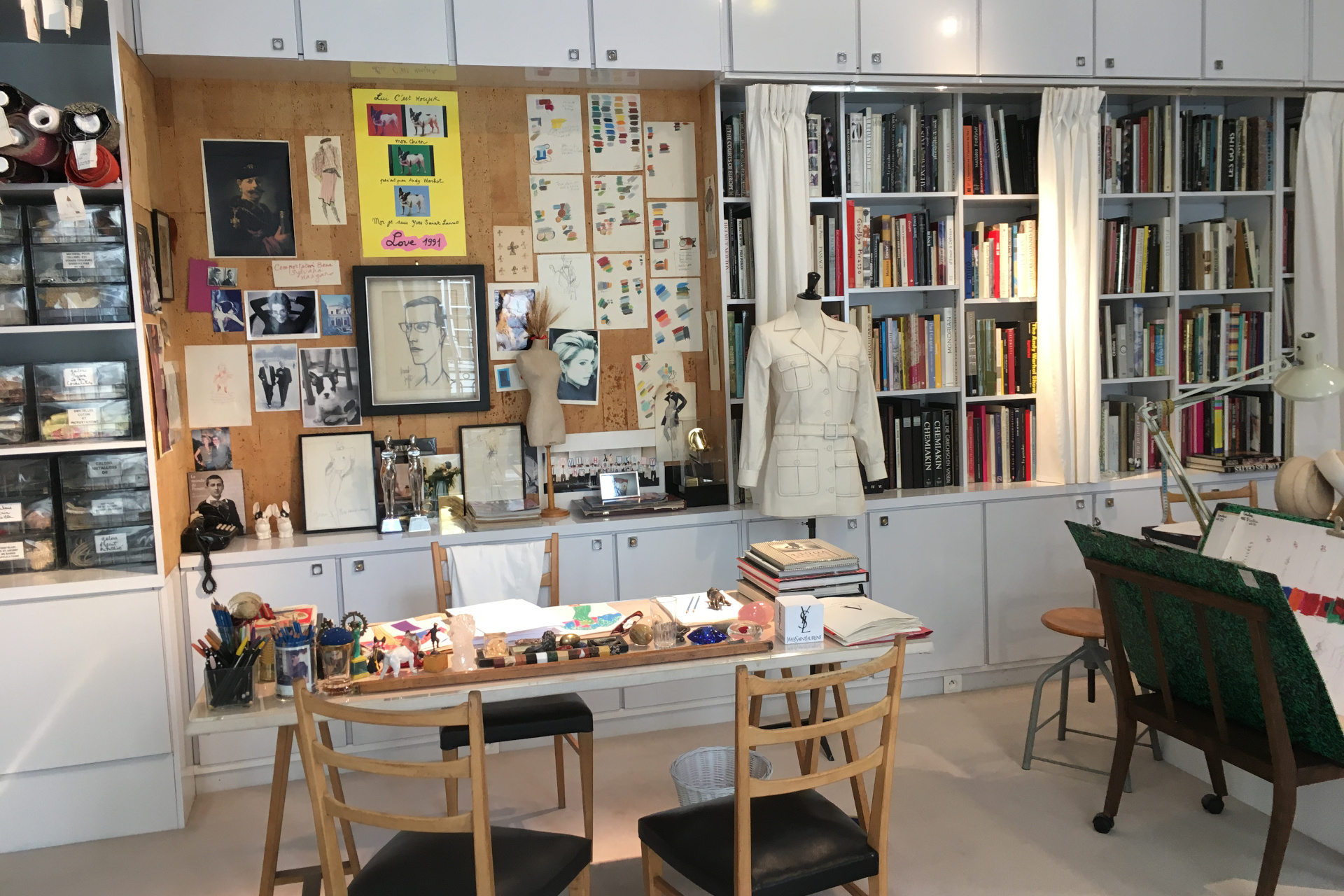 The centre of the couture universe is also where the amazing high jewellery presentations take place. I had a great time at the Paris Fashion Week. However, every time I’m in this exciting city, I take the chance to visit some of its sacred sanctuaries. This time I saw the museum dedicated to Yves Saint Laurent.

Unlike many teenagers in the 90’s, my wall was not covered with posters of my favourite bands and rock stars. Instead, I sacrificed quite a few Vogue and ELLE magazines from my humble collection to be used as wallpaper. My favourite perfume advertisements and high fashion editorials looked down at me from above.

I have always had a soft spot for grandiose and strong imagery. The creations of certain designers through the lenses of well-known and talented photographers were just what I wanted. A copy of a Peter Lindbergh photo from 1997 with three women in Yves Saint Laurent suits were among them, similarly to that of Shirley Mallmann in a YSL dress by Helmut Newton, or one of my all time classics, again from Helmut Newton, which he made for Vogue France (Rue Aubriot, 1975, Paris) – which you can also see at the exhibition.

My admiration for fashion has not changed. Whenever and wherever I have the opportunity, I visit exhibitions of great designers and couturiers. Last autumn the Musée Yves Saint Laurent opened its doors in a three-storey Napoleon III-style mansion at 5 Avenue Marceau, the former couture house of Yves Saint Laurent (from 1974). After he announced his intention to close the haute couture house on 7 January 2002 it became the seat of the Fondation Pierre Bergé – Yves Saint Laurent following extensive renovation.

The hedonistic and adventurous life of Yves Saint Laurent has been covered by biographies (such as the ‘Yves Saint Laurent’ by Roxanne Lowit or Laurence Benaïm) and films. Although the main focus is on both the couturier’s creative genius and the process of designing a haute couture collection, the museum lets visitors take a peek inside the private life of the designer. ‘An Eagle with Two Heads’, the short movie in the video room dedicated to the special relationship of Yves Saint Laurent and Pierre Bergé is specially moving. Pierre Bergé, Saint Laurent’s long-time business- and life partner died on 8 September 2017.

The fantastic legacy has been processed by Aurélie Samuel, the director of collections and her team. She talks about her fascinating job in this video:

The exhibition has been put together with outstanding knowledge and competent curation as well as with special care since the pieces exposed to light or too much humidity begin to deteriorate. In order to preserve the fragile textiles, the museum displays the works in a rotation. The current display is on until 9 September 2018 and it includes important pieces and designs such as the safari jacket, the jumpsuit, the trench coat or the iconic ‘Le Smoking’ from 1966. Mannequins showcase collections that were inspired by Saint Laurent’s imagined and real journeys to China, Morocco, Spain or Russia.

The museum owns an exceptional variety of objects: graphic arts like original sketches and collection boards, art photographs from Helmut Newton, Irving Penn, Richard Avedon and many more, textiles, accessories (jewellery, scarves, hats and gloves) and paintings, such as portraits from Andy Warhol. These colourful portraits welcome the visitors close to the entrance.

Back in the day, the ground floor gave space to the Haute Couture salons for the clients and sometimes even fashion shows. Today, these rooms hide early sketches, designs and drawings by Yves Saint Laurent.

He was born in 1936 and grew up in Oran, Algeria. As a child, he observed the refined lifestyle of Oran’s society through his stylish mother and her friends. He was influenced by his first theatrical experiences so much so, that at a young age he decided to create his own little version with costumes and settings. He had made sketches already in his early years and drew thousands of them throughout his career.

At the age of 17, he left for Paris where he showed his drawings to Michel de Brunhoff, the director of French Vogue, who published several of them. He also created paper dolls and different kind of illustrations. In 1956 he started a sarcastic comic strip, called ‘La Vilaine Lulu’ or ‘Nasty Lulu’ and the ‘LOVE’ card series in 1970. He would send these as postcards to his friends, collaborators, and clients annually until 2007. 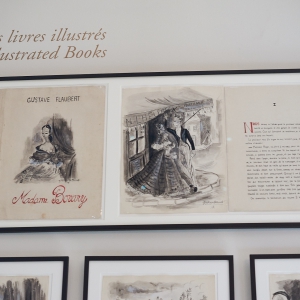 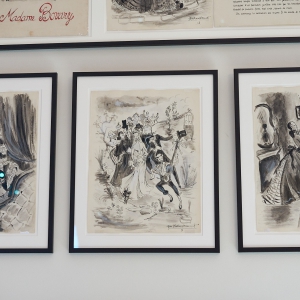 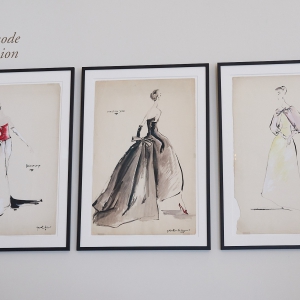 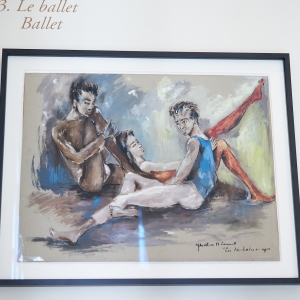 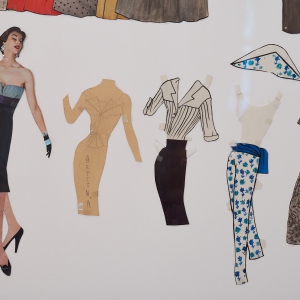 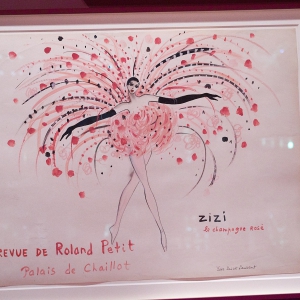 Other rooms talk more about the creation process. They present collection boards, videos and even a recreated ‘studio’ with the work table that had belonged to Saint Laurent since 1962. It still bears his personal objects. While working, he expected all 200 people at the couture house to know their specific role, place and duties to deliver the highest quality.

‘The original sketch, which was made by Saint Laurent and later given to the chef d’atelier, served as the starting point for the creation of a model in the atelier. The ateliers’ specification sheets presented a reproduction of the original sketch and detailed the fabric and colour references, the names of suppliers, and the exact accessories associated with the design, in addition to information related to the atelier and the model. Each change effected as the garment was being made was carefully noted’ (source: Musée Yves Saint Laurent). 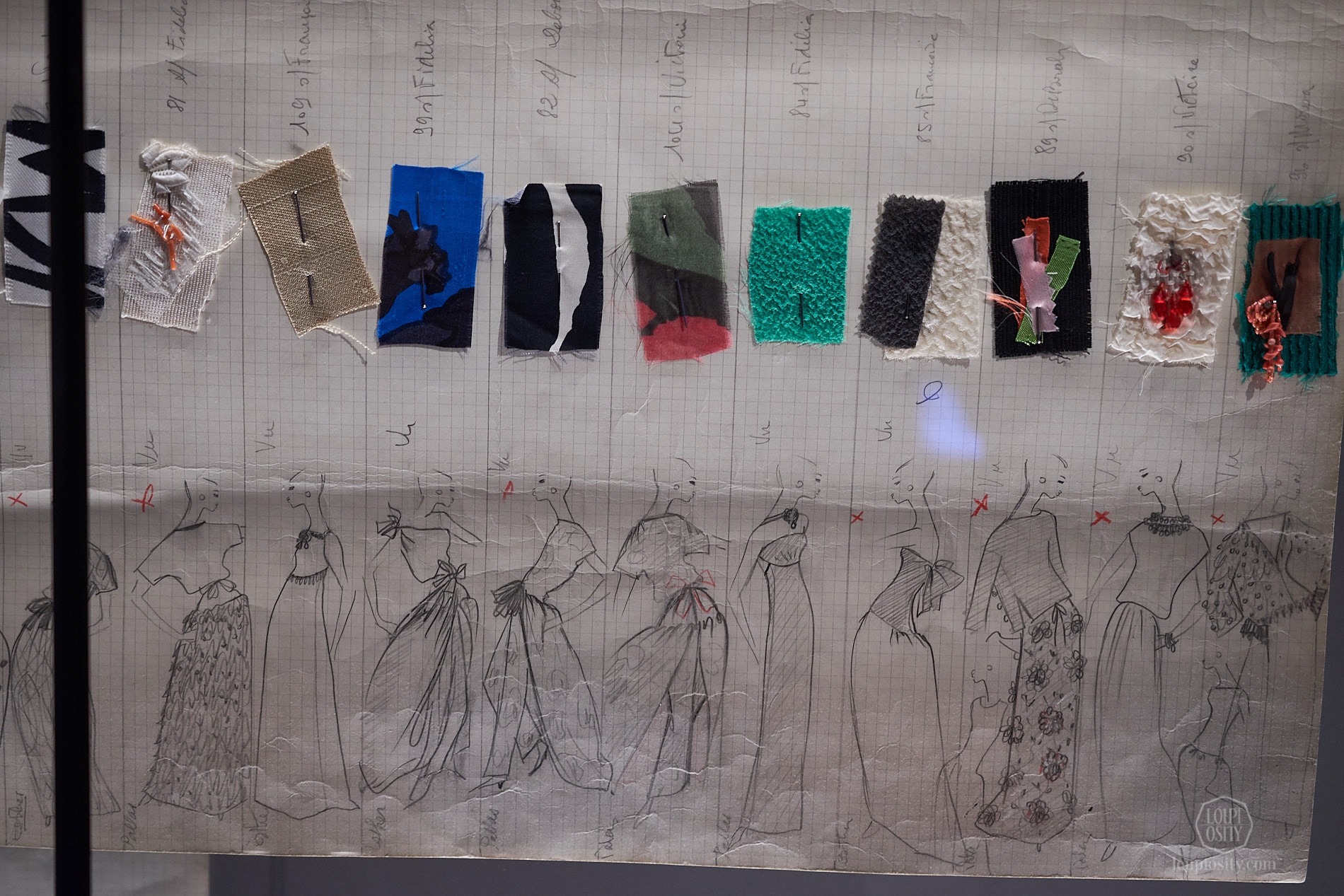 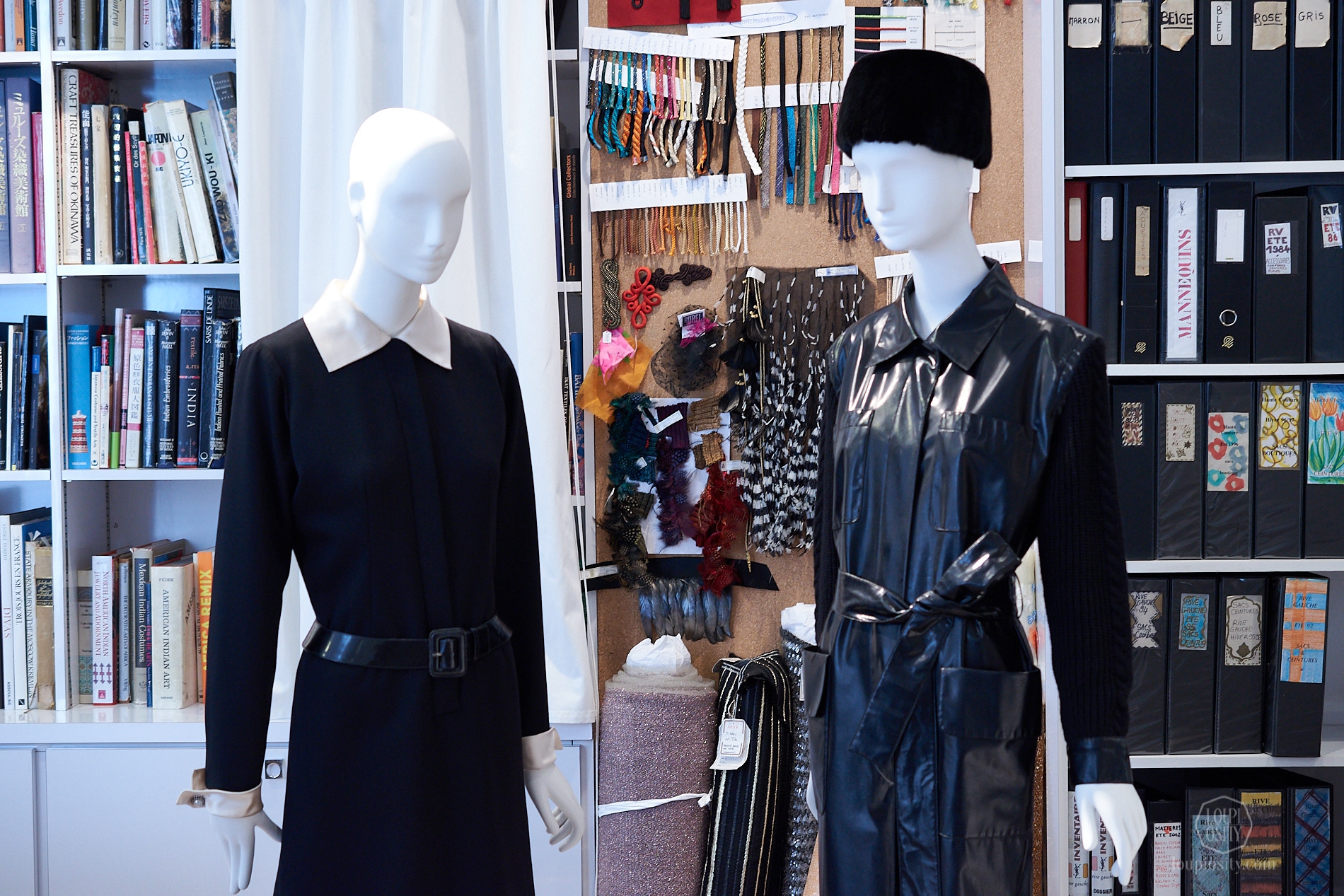 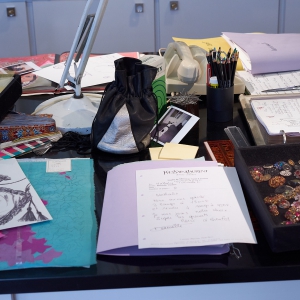 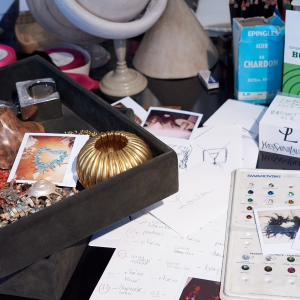 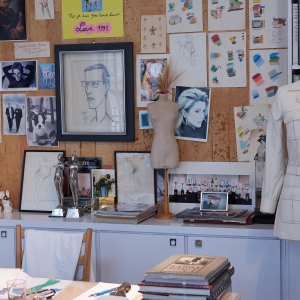 The Musée Yves Saint Laurent is real treat for any haute couture aficionado, but it could be interesting and visually entertaining for everyone. This autumn a new thematic exhibition will be showcased, ‘L’Asie rêvée d’Yves Saint Laurent’ (Yves Saint Laurent: Dreams of the Orient). It lines up Saint Laurent’s designs in the theme, extended with works borrowed from museums and private collectors (October 2018 – January 2019). 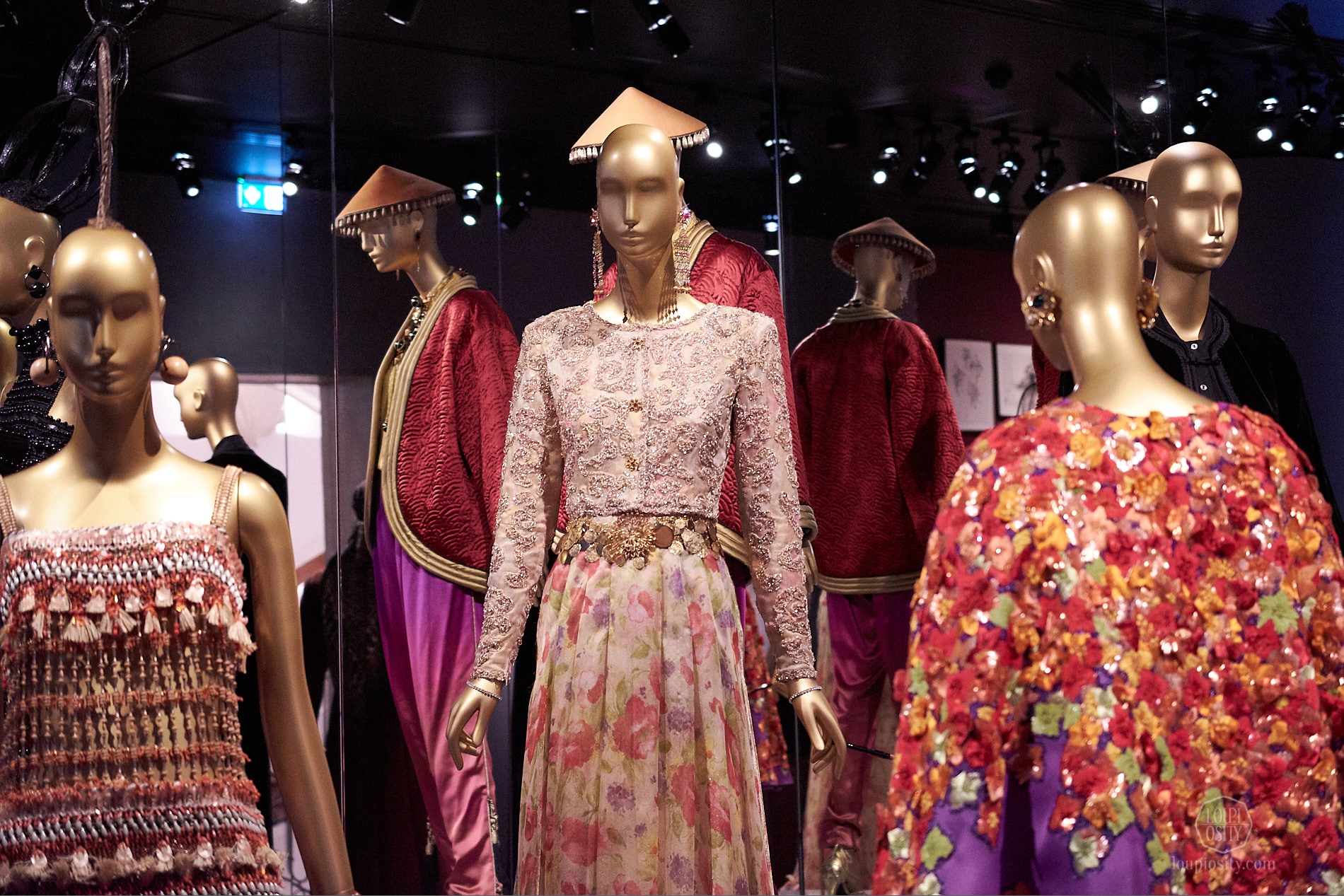 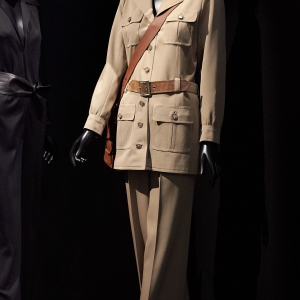 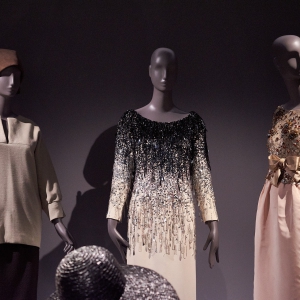 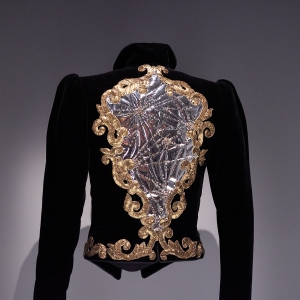 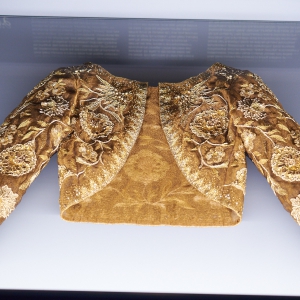 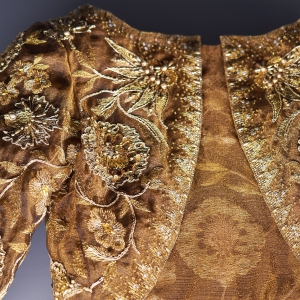 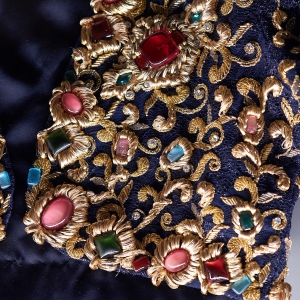 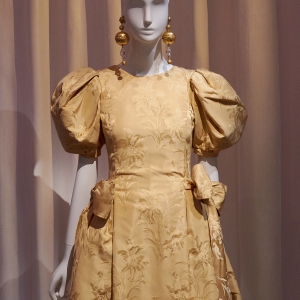 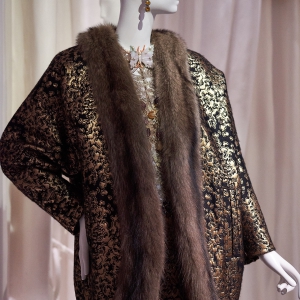 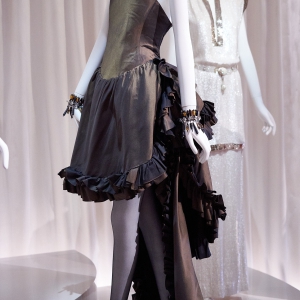 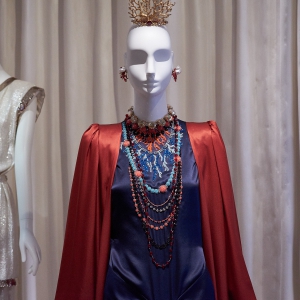 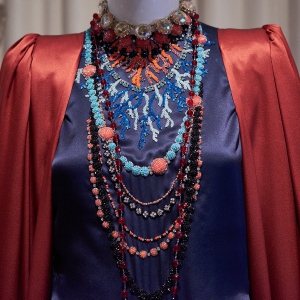 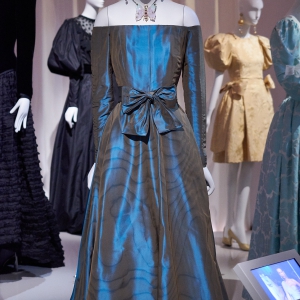 Photo credits: Loupiosity.com. The photos were taken at the exhibition at Musée Yves Saint Laurent. All images used for illustrative purposes only. All registered trademarks are property of their respective owners.
All rights reserved.

Betty Catroux, Yves Saint Laurent - Feminine Singular This March the Musée Yves Saint Laurent Paris devotes a special exhibition to Betty Catroux, fashion icon and Yves Saint Laurent’s ‘female double.’ The pieces displayed at the exhibition come from a major donation Betty Catroux has made to the Fondation Pierre Bergé.IWC Schaffhausen & Cousteau Divers On the World Oceans Day (8 June) IWC Schaffhausen announced its support for a pioneering environmental project, spearheaded by Cousteau Divers.Brands and art at Art Basel 2021 Art Basel has a long-standing tradition of working together with well known partners and brands. Some of them are even dedicating significant resources to commission artists or art projects and either launching and communicating it at the fair or including the artist in the exhibition program. Now - as Art Basel 2021 is back with an IRL edition in Basel…