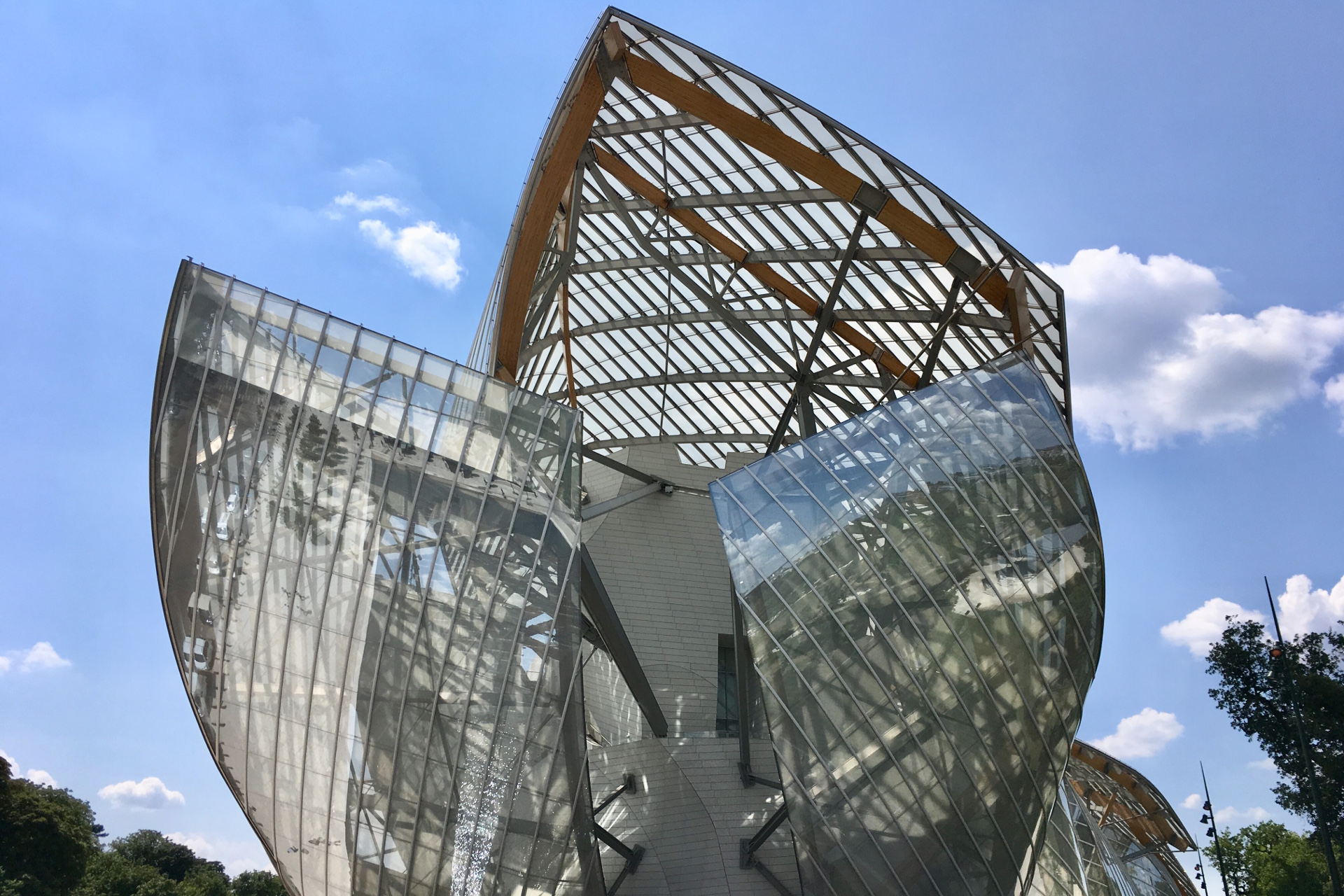 The everyday stylishness of Paris is kicked up a notch during the Paris Couture Week. The city buzzed with fashion editors, stylists and models. I was lucky enough to be in the fashion and culture capital and like always, I wanted to make the most of it by visiting some of the most exiting exhibitions and museums. I wrote about the Musée Yves Saint Laurent, but it would be a shame to miss another landmark, the Fondation Louis Vuitton contemporary art museum.

The building designed by Frank Gehry hosts the home of intellectual excitement and inspiration: the Fondation Louis Vuitton. Ever since the first inaugural exhibition in 2014, FLV has regularly showcased selections of modern and contemporary art. The foundation aims to be the messenger of contemporary artistic creativity for a wide French and international audience.

LVMH (Moët Hennessy Louis Vuitton SE) is one of the largest multinational luxury goods conglomerates headquartered in Paris. They own 70 distinguished brands from six different sectors. Initiated in 1990, the corporate philanthropy program of the group supports arts and culture in different ways; such as the LVMH Prize for Young Fashion Designers, the LVMH Discovery and Learning Classes, a specific educational program for children or the ‘Institut des Métiers d’Excellence’ (a training program to promote careers in traditional craftsmanship).

Gehry’s building in Paris is not only a philanthropic initiative but also a passion project for Bernard Arnault, Chairman & Chief Executive Officer of the LVMH group, who is one of the most important art collectors of today: ‘A new space that opens up a dialogue with a wider public and provides artists and intellectuals with a platform for debate and reflection.’ The LVMH group announced the creation of the Fondation Louis Vuitton in October 2006 and the construction started in early 2008 next to the Jardin d’Acclimatation in the Bois de Boulogne, a large public park in Paris near the suburb of Neuilly-sur-Seine. It opened to the public on 27 October 2014.

The collection of the Fondation includes works by Gerhard Richter, Thomas Schütte, Pierre Huyghe, Bertrand Lavier, Christian Boltanski and Frank Stella and it is overseen by Suzanne Pagé, the French curator and artistic director of the Foundation. 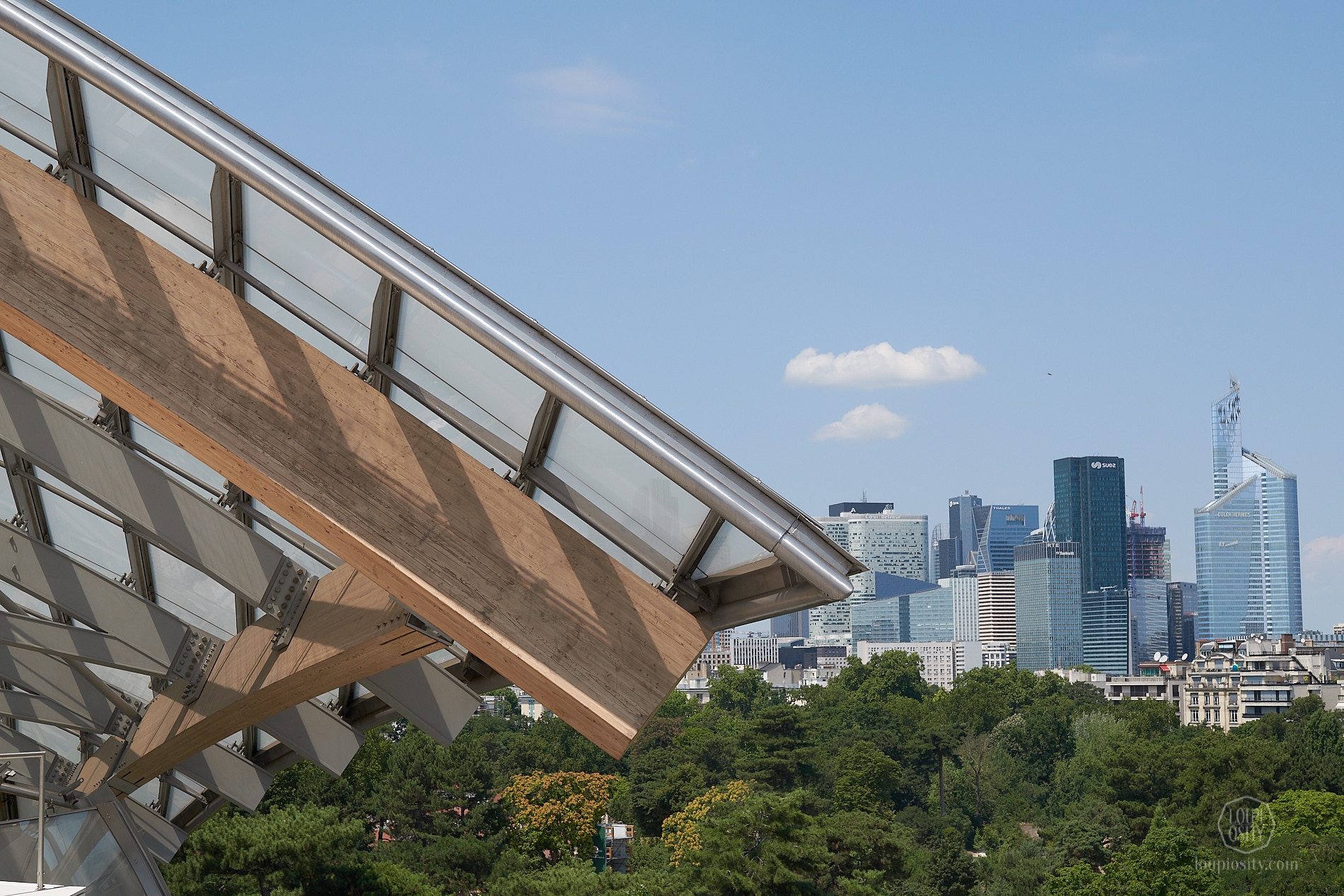 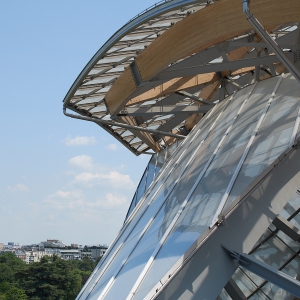 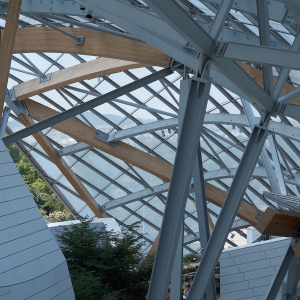 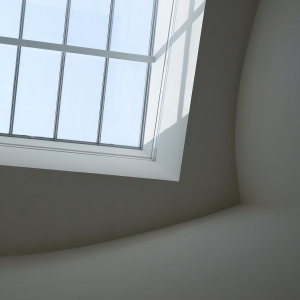 The exceptional building was designed by Frank Gehry, a Canadian-American architect. His emblematic designs and high-concept buildings include the Walt Disney Concert Hall in Los Angeles, the Vitra Design Museum in Germany or the Guggenheim Museum building in Bilbao, Spain, which have all become tourist attractions in their own right.

‘Question everything, be curious forever, and never forget that life is about people, so make buildings for people, and always use natural light, ’cause it is free.’ – so Frank Gehry summarises his philosophy.

The futuristic glass landmark is pretty recognisable. He has a diverse style but he is considered to be a deconstructivist, a movement in postmodern architecture where elements of the design appear to be fragmented. The FLV building has 11 galleries in different sizes, a 350-seat auditorium, huge glass shapes made out of 3600 uniquely curved glass panels and multilevel roof terraces for events and art installations. The building takes the form of a boat’s sails inflated by the wind – but others describe it as a big fluffy cloud or as icebergs. The museum itself offers an architectural tour guided by an app for adults and a cool, special one for children.

‘In Tune with the World’

The current exhibition on until 27th August 2018 entitled ‘In Tune with the World’ unveils a fresh selection of various modern and contemporary artists. The works communicate with the audience via a broad range of mediums including film, installation, sculpture and canvas. The exhibition circles the question of what the place of humankind is in the universe and on our planet – our connections to the environment, to other humans, our predecessors, animals, plants, and even inanimate objects. It unfolds on four floors and in 2 sequences.

Sequence A is dedicated to the Japanese artist, Takashi Murakami. Murakami is considered to be the most influential contemporary artist of Japanese pop culture, working at the intersection of fine and commercial art. For more than a decade he has also collaborated with Louis Vuitton by reimagining the motifs of his paintings on the bags. Colours, flowers, camouflage patterns and manga characters gave mint freshness to the classic LV designs.

His colourful and powerful visual world is inhabited by various creatures. With them he reflects on cultural legends, historic shocks and the current events around him. In an interview he said: ‘My aesthetic sense was formed at a young age by what surrounded me: the narrow residential spaces of Japan and the mental escapes from those spaces that took the forms of manga and anime.’

Murakami is primarily a painter; however he has explored other media such as film. He is famously friends with technology such as 3D modelling, which he uses to gain more understanding of the nature of shapes and thus to better express himself on the canvas. During his talks with Artnet he drew a parallel with Frank Gehry: ‘Once the computer started evolving, and he could use it more freely, then his forms started morphing more drastically. I think those forms were always in his head, but until the technology really caught up with him, he couldn’t realize them in his work.’ He has a large team supporting him on many designs. For this reason and due to his extreme success in packaging his world into marketable products, he has been very divisive.

He worked with the curators of the Foundation to present his connection to the world in three galleries. Gallery 9 is dedicated to DOB, which is a character considered to be his alter-ego. Gallery 10 presents a gigantic painting called The Octopus eats its own leg (2017) which is an intensive manifestation of the theme of rejuvenation, part of the Japanese folklore. Surrounded by various mythological creatures, the octopus loses a leg, which then re-grows. Gallery 11 is dedicated to the Manga-inspired space of cuteness and aesthetics, called Kawaii and Murakami’s fairy-tale universe. 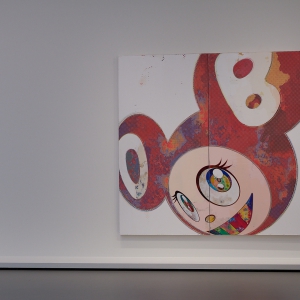 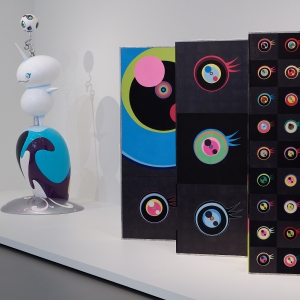 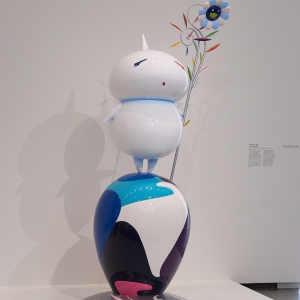 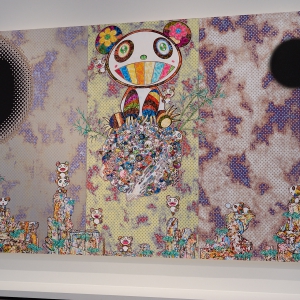 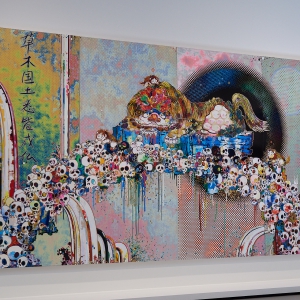 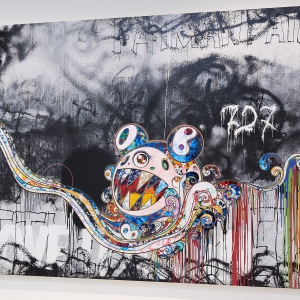 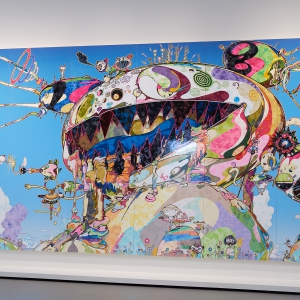 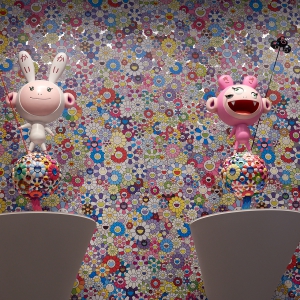 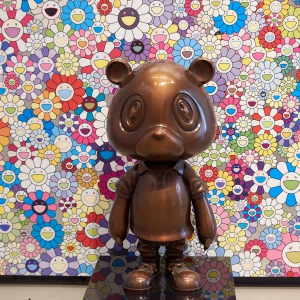 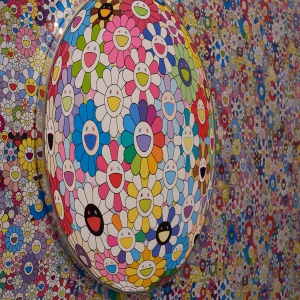 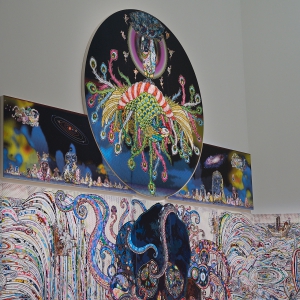 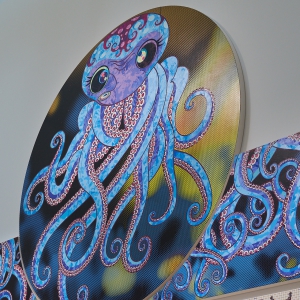 ‘Man in the living universe’ is the topic of Sequence B, which brings together 28 French and international artists. It is divided into three complementary themes, each presented on a separate floor: ‘Irradiances’ (on level 1), ‘Here, infinitely…’ (on level 0) and ‘The man who capsizes’ (on level -1).

This sequence offers not only a great variety of artists but also of genres. Visitors can admire sculptures from Swiss artist Alberto Giacometti (1901-1966) – one of today’s most sought-after sculptors; a room-sized installation from François Morellet (1926-2016) with thirty-six blue neon tubes and white high voltage wires; a paper cut-out ‘Blue Nude with Green Stockings’ (1952) by Henri Matisse (1869-1954), French artist who had a great impact on Fauvism and other 20th century movements. 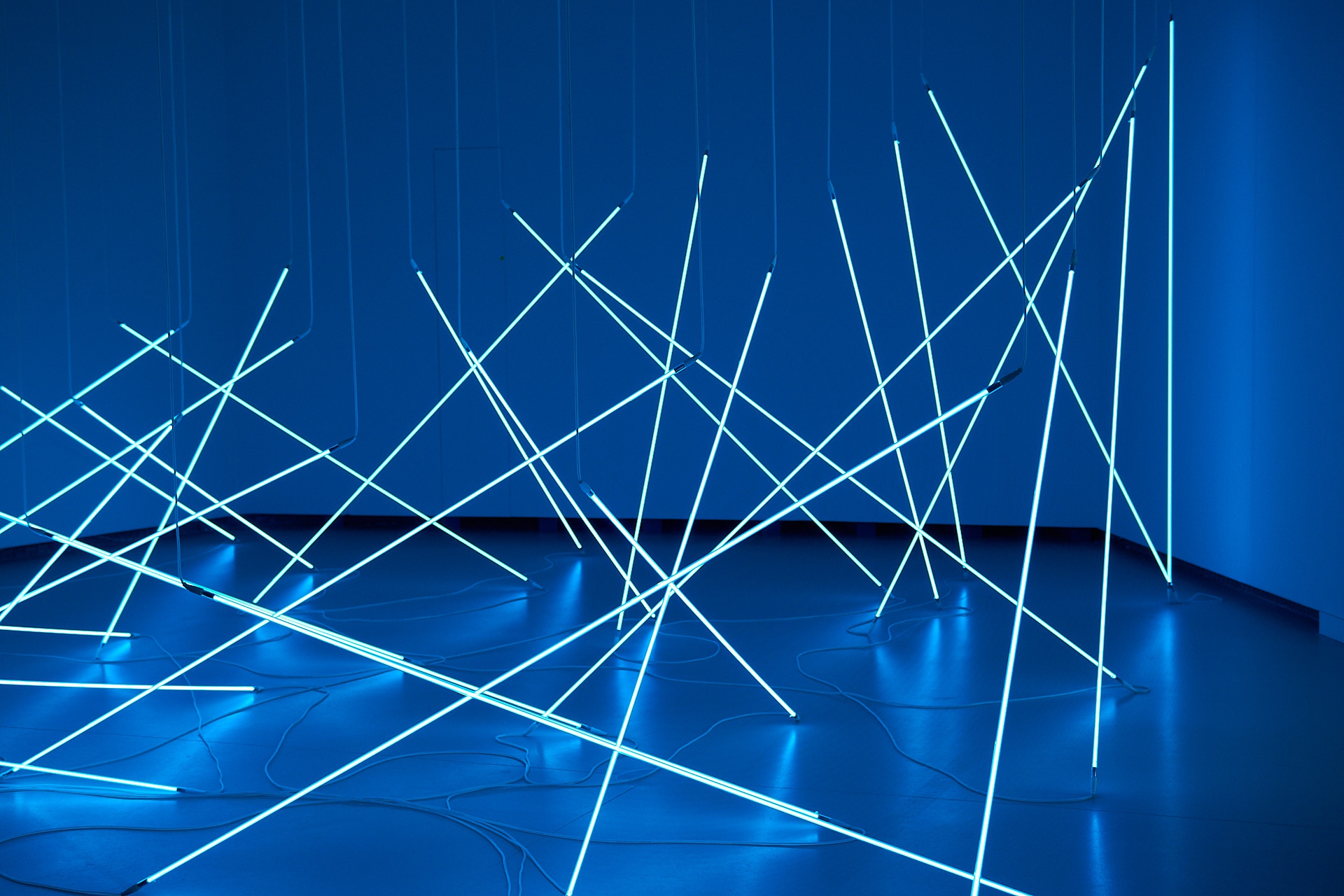 I like Georges Seurat (French painter, draftsman 1859 – 1891, one of the most notable figures of Pointillism), thus I found the painting of the Polish contemporary artist Wilhelm Sasnal, ‘Bathers at Asnières’ (2010) particularly interesting. He took the central figure of Seurat’s ‘Une Baignade, Asnières’ (1884), a sitting boy on the riverside of the Seine. On the work of Sasnal the boy is alone, without anyone in sight. The waterfront scene could be peaceful and picturesque but Sasnal was inspired by a story from his grandmother about the summer of 1939, not long before the Nazi occupation of Poland. The menacing melancholy of the picture reflects the mood of the time. The German forces invaded Poland on land, water and in the air in September bringing misery, pain and suffering to all individuals of the country. 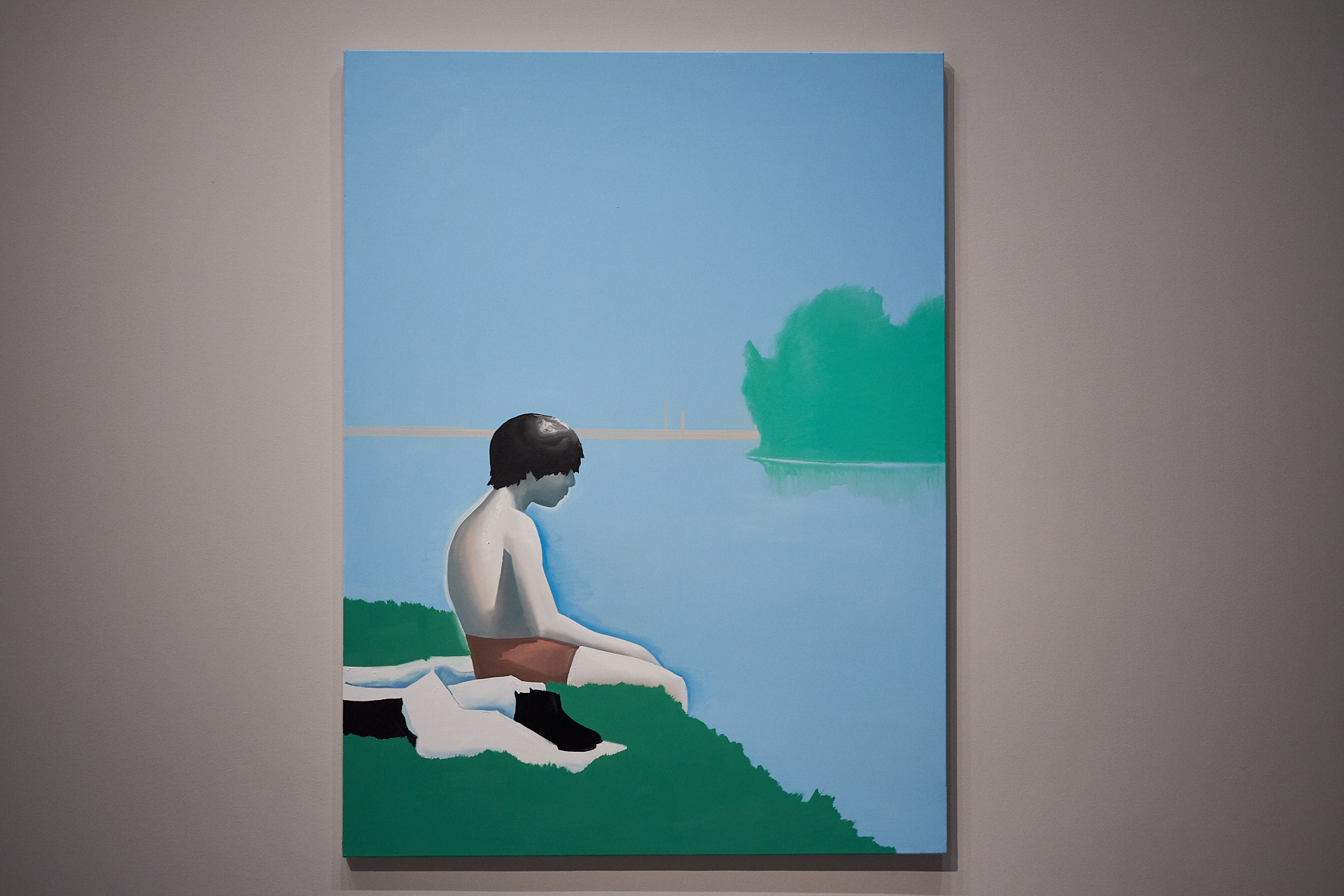 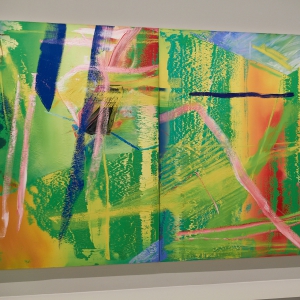 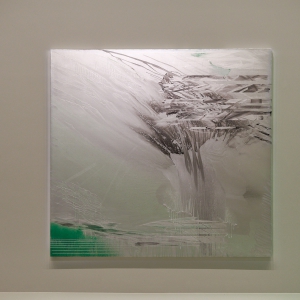 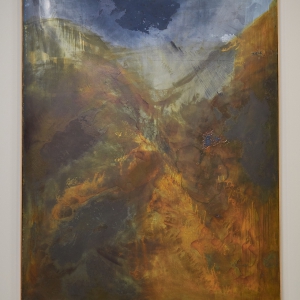 The ‘In Tune with the World’ exhibition runs until 27th August 2018. The next showcase starts on 3 October 2018 and will dedicate the heavenly stage to two very interesting artists, Jean-Michel Basquiat and Egon Schiele. ‘From opposite ends of the 20th century, from Europe – Vienna – to America – New York, the lives and works of Egon Schiele and Jean-Michel Basquiat are fascinating for their fleetingness and their intensity.’ The exhibition will be on until 14 January 2019.

Photo credits: Loupiosity.com. The photos were taken at the exhibition at Fondation Louis Vuitton. All images used for illustrative purposes only. All registered trademarks are property of their respective owners. All rights reserved.

Betty Catroux, Yves Saint Laurent - Feminine Singular This March the Musée Yves Saint Laurent Paris devotes a special exhibition to Betty Catroux, fashion icon and Yves Saint Laurent’s ‘female double.’ The pieces displayed at the exhibition come from a major donation Betty Catroux has made to the Fondation Pierre Bergé.SEE LV in Dubai Louis Vuitton presents the SEE LV experience about the over 160 years of the Maison’s history at the Dubai Mall Fountain - as the third stop of the travelling exhibition.Summer in Paris To soothe our covid-battered soul, the City of Lights has prepared an abundance of events this summer. From the hundreds of exhibitions, boutique openings and cultural programmes in Paris I selected a few for my long weekend. Check them out if you fancy a recharge in the French capital.