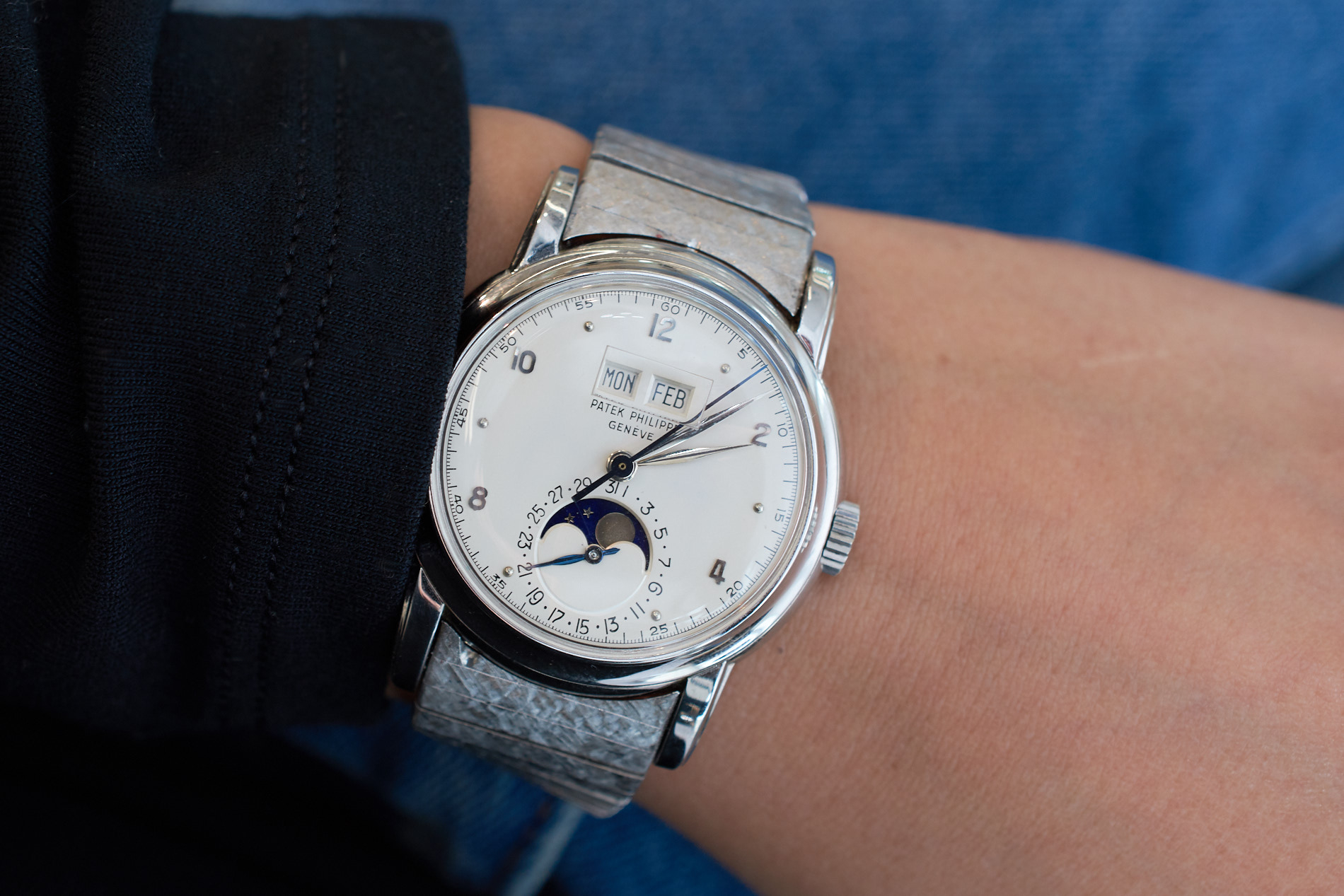 On 26 October, Phillips’ first US auction celebrated the Winning Icons of the 20th century with great success. It elevated the mood for the upcoming auction weekend on 11-12 November in Geneva. The two days will include three sales events: two sessions at the Geneva Watch Auction: SIX and an exceptional Heuer chronograph sale from the Crosthwaite & Gavin Collection.

This beautifully aged 1942 chronograph dial entices you to explore this piece immediately. The patina on the originally silvered surface and its stronger presence in the chrono sub-dials makes it look like a panda dial. It is interesting that the chronograph hands (the centred seconds and the minutes in the right sub-dial) are distinguished from the time hands by being blued.

Due to the large pushers, which play a role in providing waterproofness, the model is called “Tasti Tondi” (meaning round buttons in Italian). The model is one of the two Patek Philippe water-resistant vintage chronograph references (another is the split-seconds ref. 1563).

The present timepiece is double signed by Patek Philippe and Beyer. It is offered for sale by the family of the original owner. 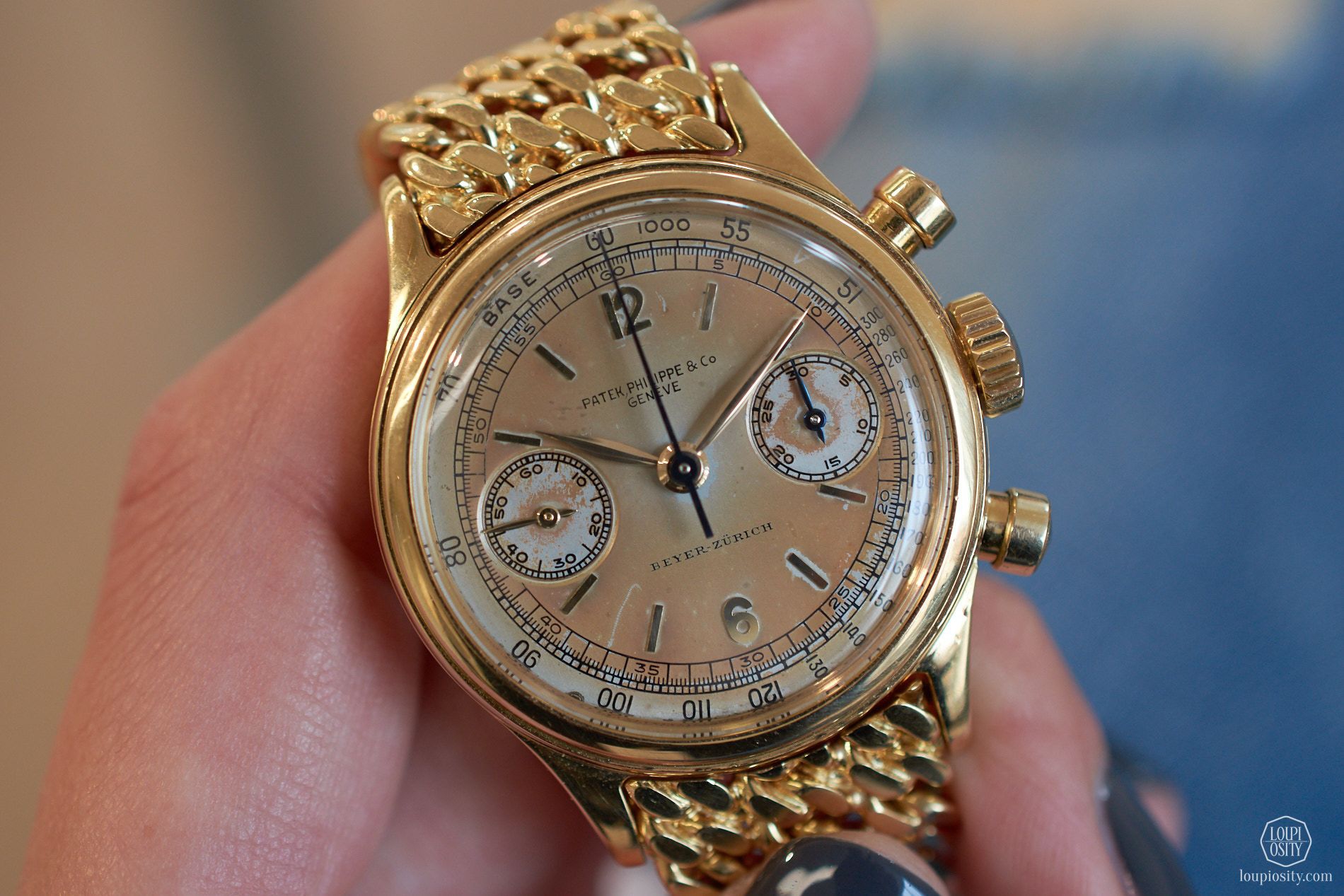 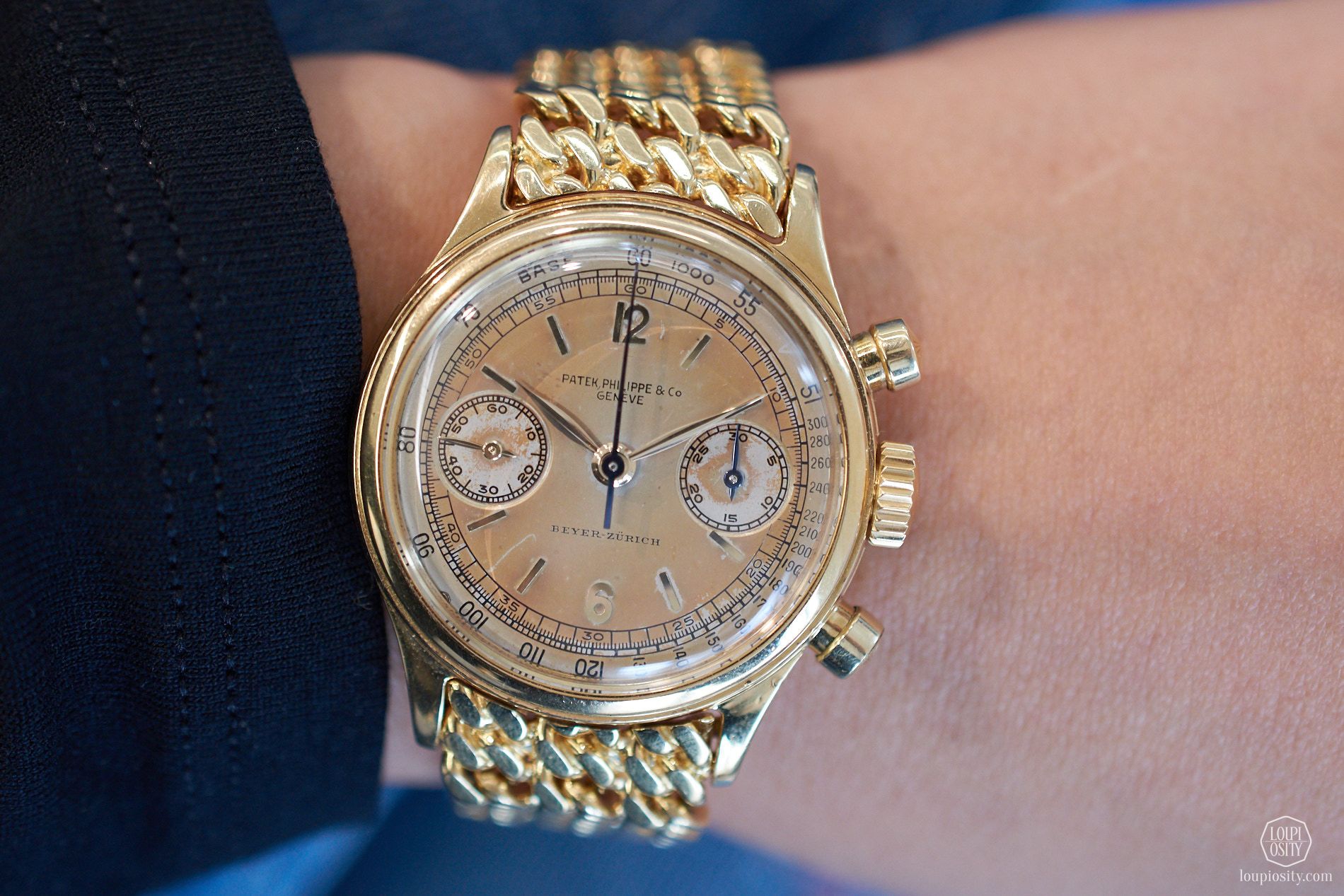 This May two beautiful examples of Rolex’s most complicated models were sold at GWA5. The Ref. 6062 has a triple date function (month, day and moon-phase) and it is sought-after by collectors. These models were made only for a few years and then Rolex abandoned the moon-phase complications until the Cellini Moonphase was introduced earlier this year.

The piece offered now is a pink gold version from 1953 with a two-toned dial. The case material and the dial setup make it even rarer among the already rare 6062s. 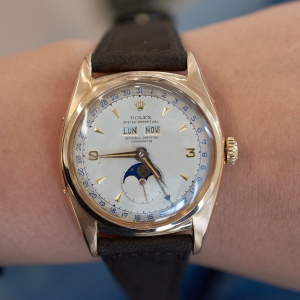 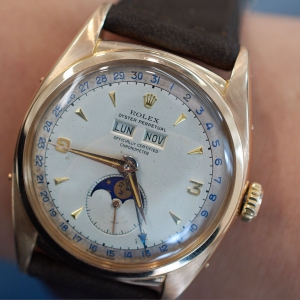 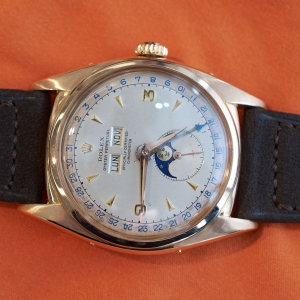 As it reads in the auction catalogue, these blue sunray-brushed dials, made by Rolex’s dial manufacturer Singer, did not have a positive reception on the market. Therefore, they were rather gifted by the brand to partners and executives. One of these is now for sale at GWA6.

Inside is the automatic Calibre 4030, which appeared in the Daytonas a year before and was based on a heavily modified Zenith El-Primero movement. The present lot is in superb condition and given the rarity of the dial, it will be a piece collectors will compete for. 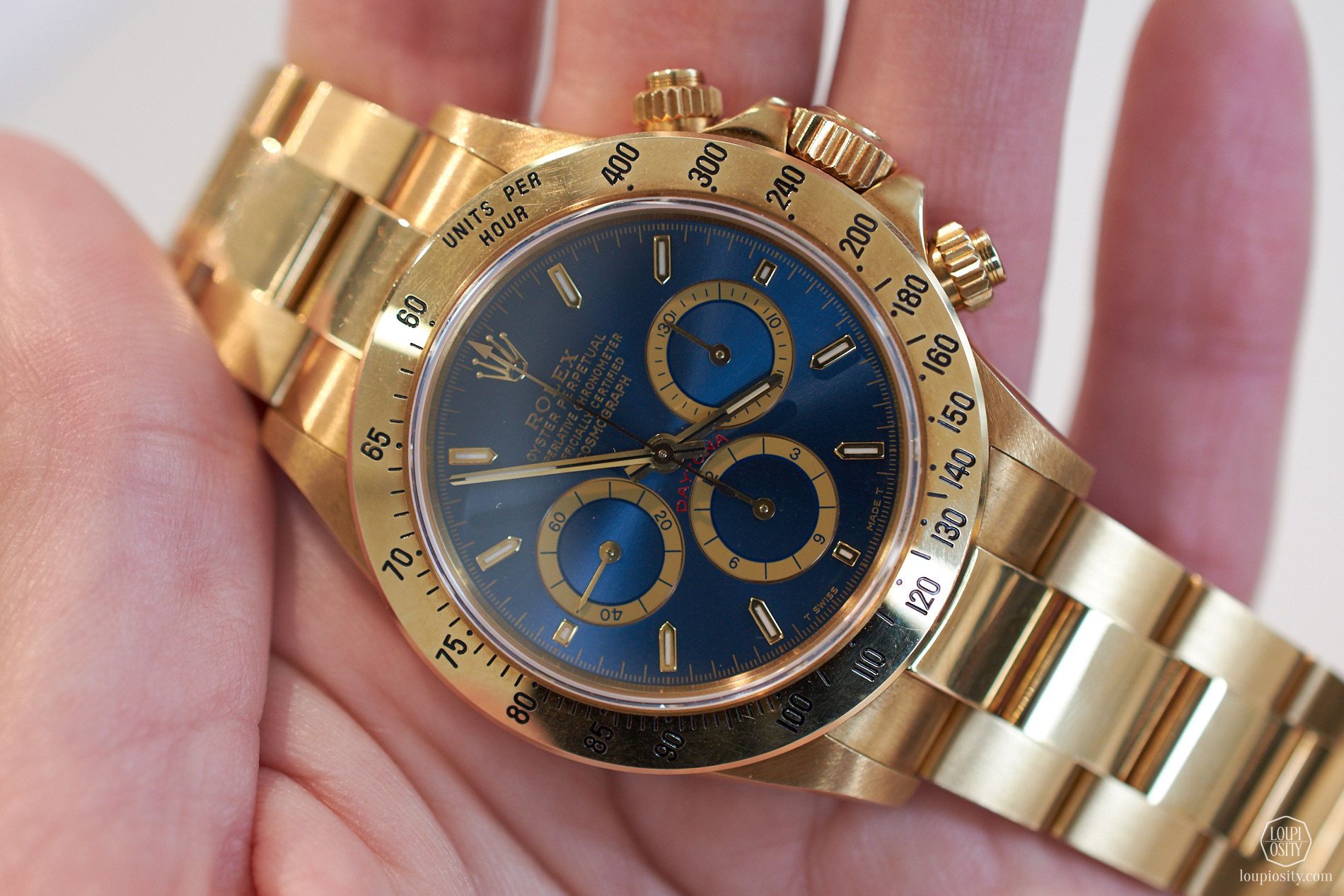 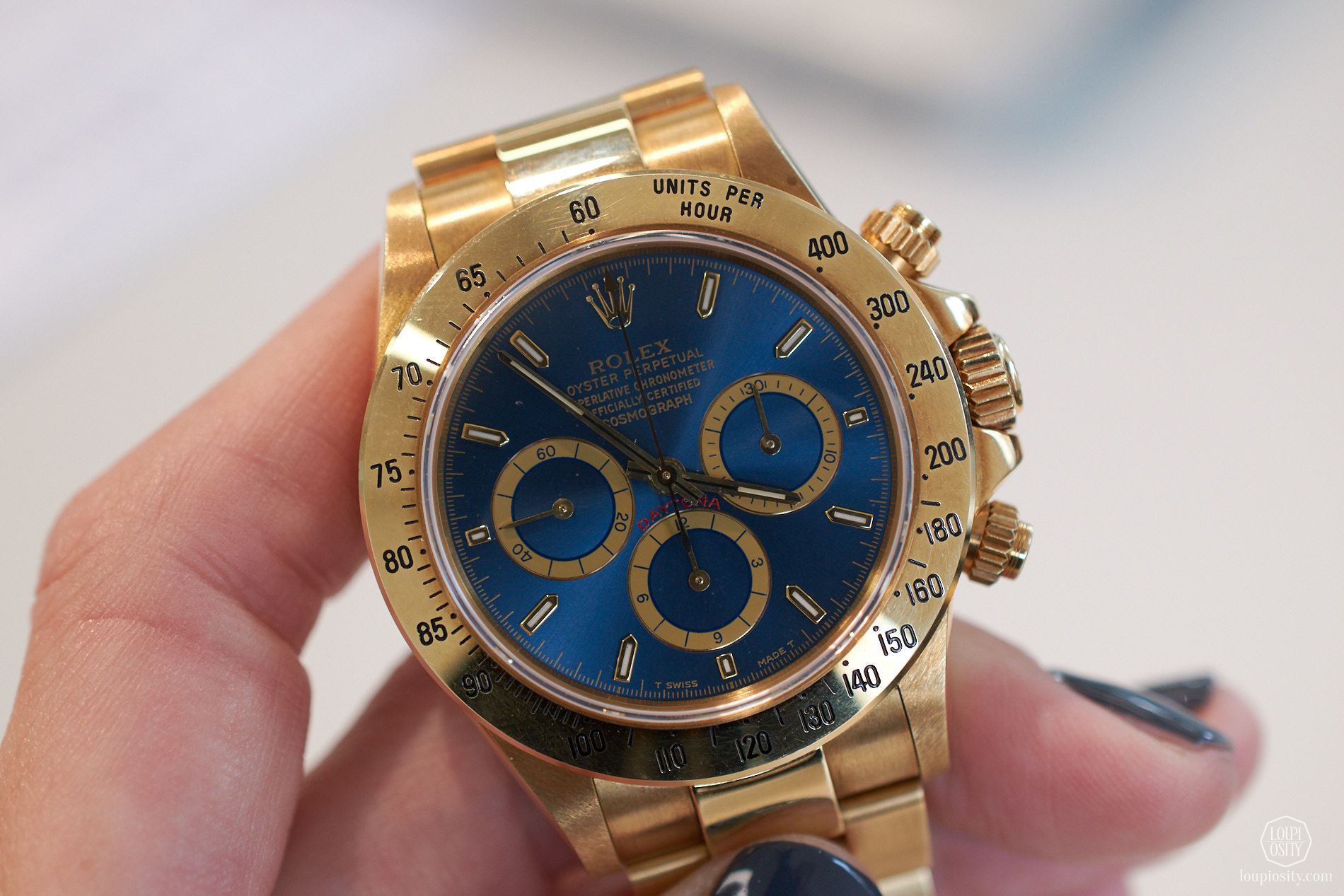 Rarity and quality are defining conditions in collecting. This Omega prototype is the only known watch the company created to prepare for producing the first tourbillon wristwatch that was supposed to be made in series.

It is based on the company’s “racing” movement, Calibre 30 I. Between 1947 and 1952 Omega participated in chronometry competitions with twelve Calibre 30 I movements. Drawings of a thirteenth tourbillon integrated suggested the existence of this piece. Finally only this prototype was built.

Calibre 30 I was made with a purpose to win (which it did in 1950). The auctioned tourbillon integrated movement was also encased with a “hi precision – low profile” mind-set, and thus it became one of my favourites in this batch. I love its simple, elegant and functional look and the sharp edges. 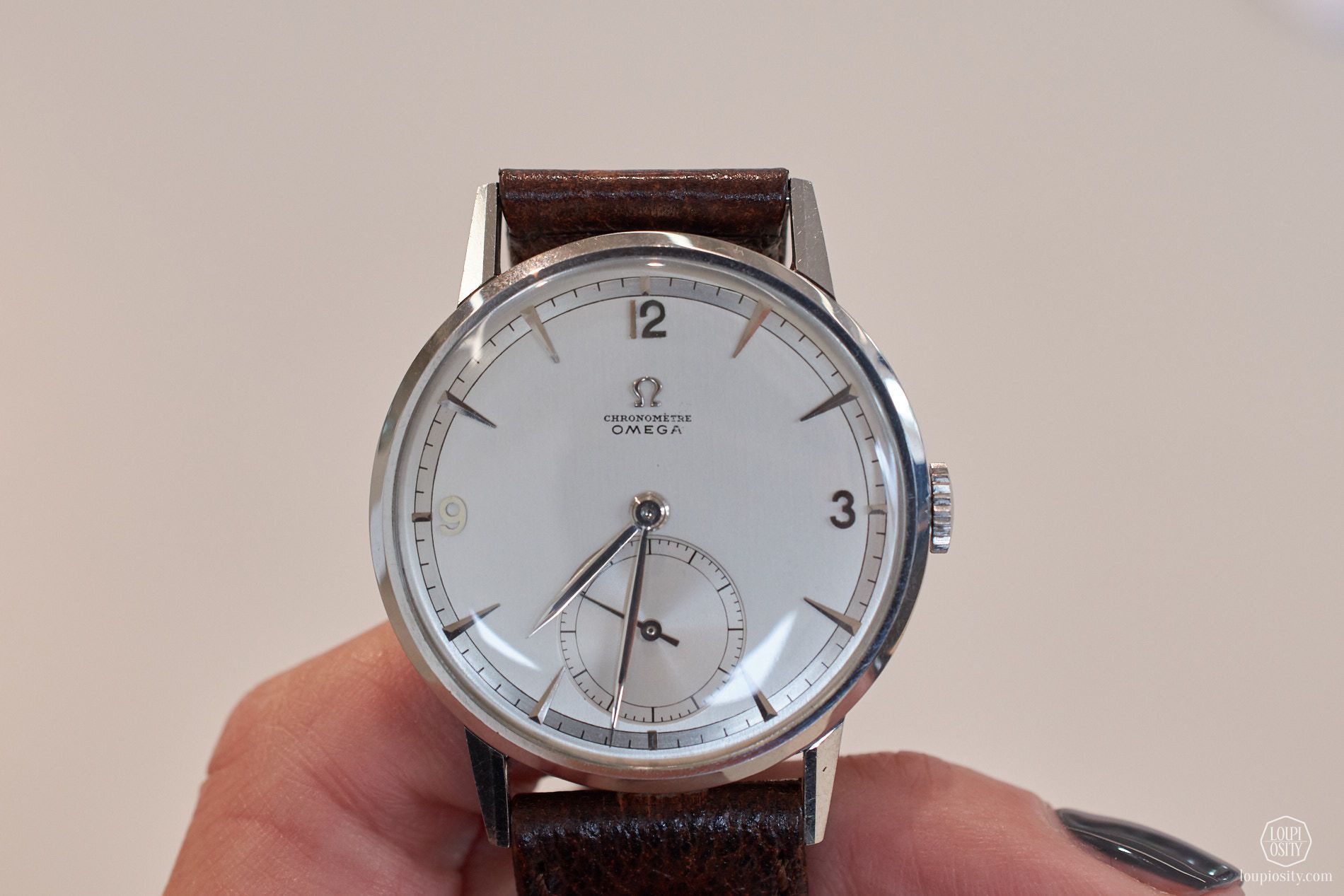 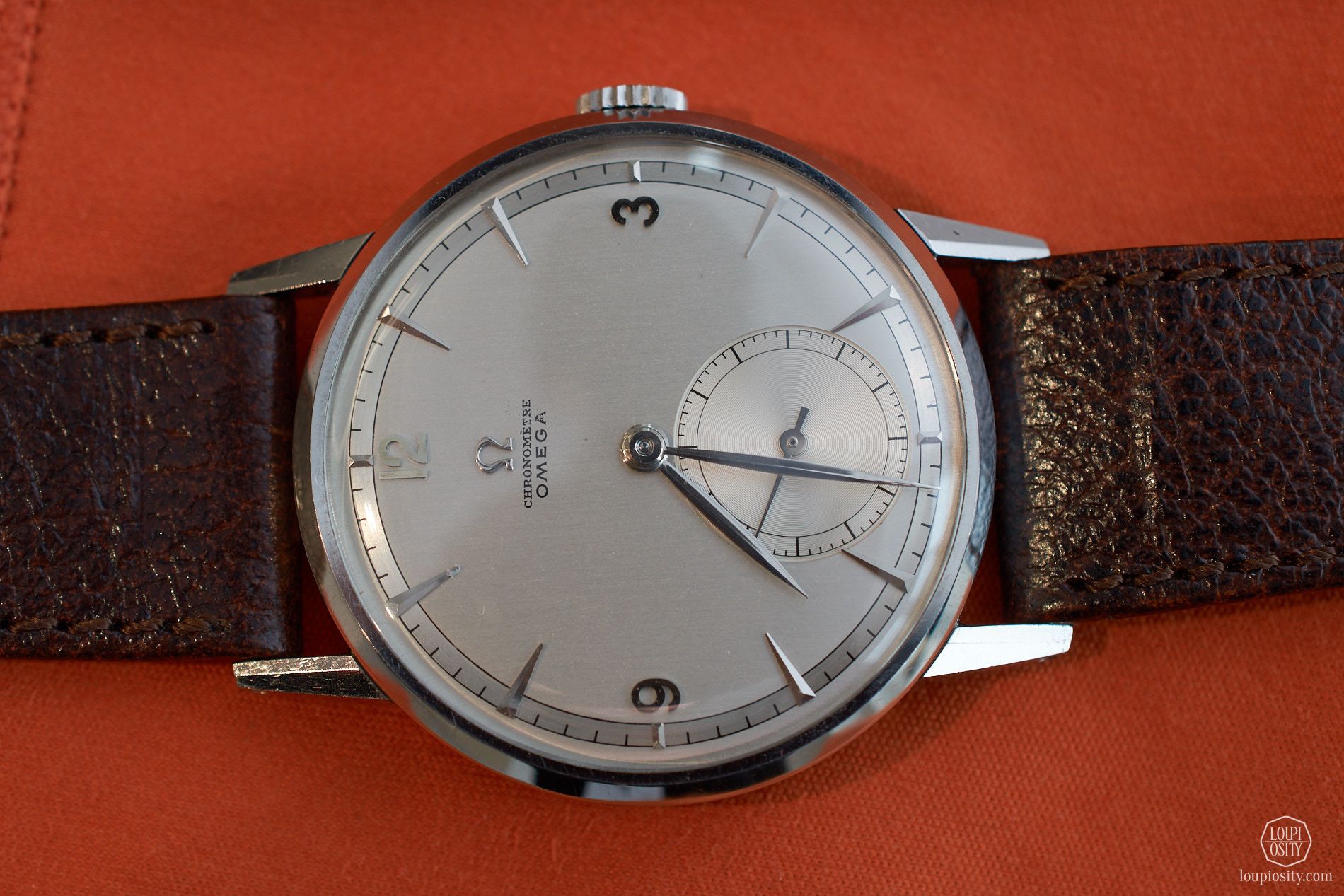 Created in 1954 and sold in 1963 for the first time, this timepiece is the next in the row of rare white-metal Patek Phillippe perpetual calendar watches appearing at a Phillips auction (a year ago it was the steel Ref. 1518). The “Sydney Rose” set auction records earlier this May for the same reference in pink gold, which was one of the 20 known pieces made in that colour. In white gold, there are only three known units, one being the present example. It is also one of the first 2497s ever produced.

Unlike the “Sydney Rose”, the plexi crystal over the date apertures has a magnifying loupe on this one. The enamel dial, the hands and the case are in an almost untouched condition. As a very stylish feat, the bracelet made by Gay Frères, is also white gold with a “Florentine” finish. 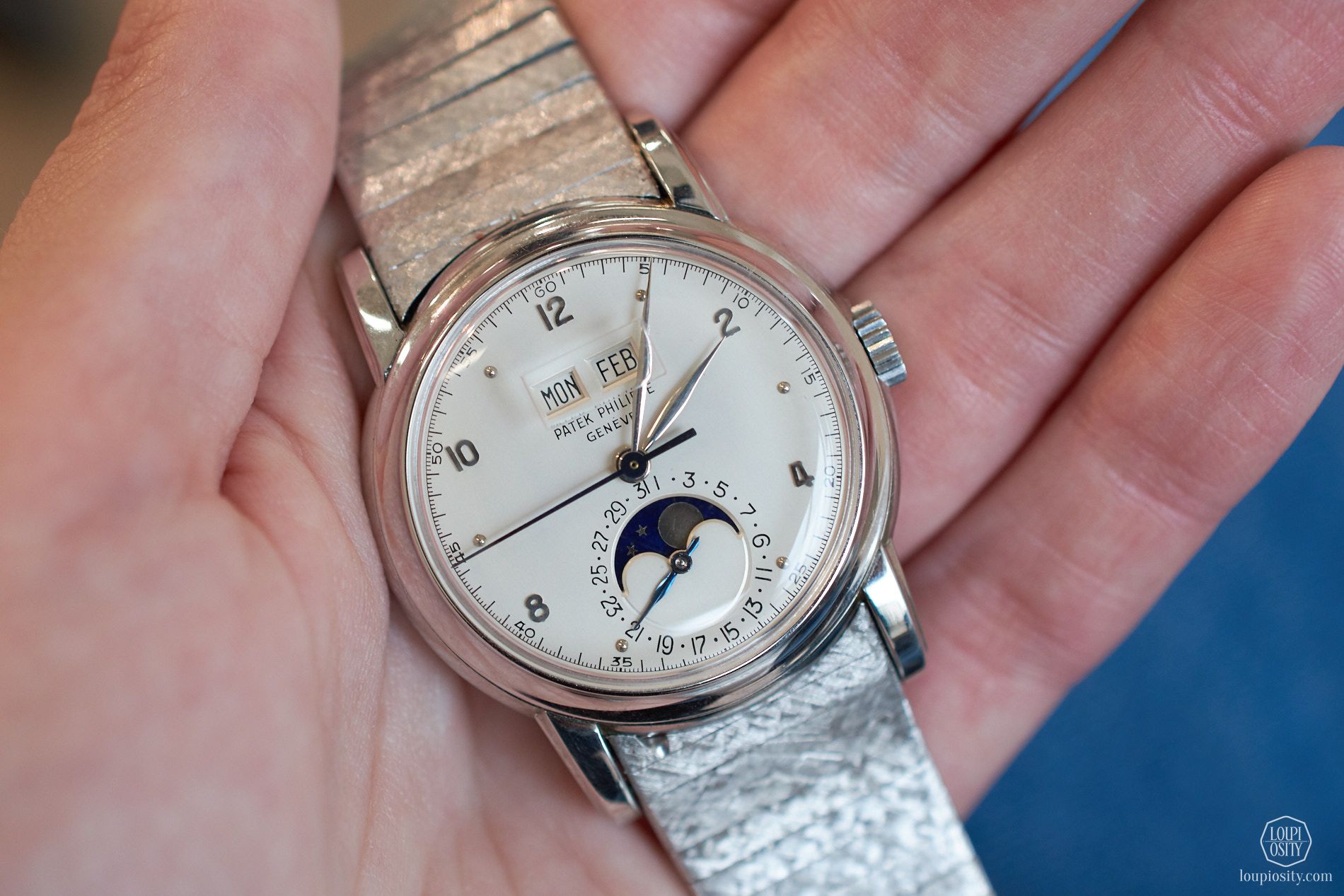 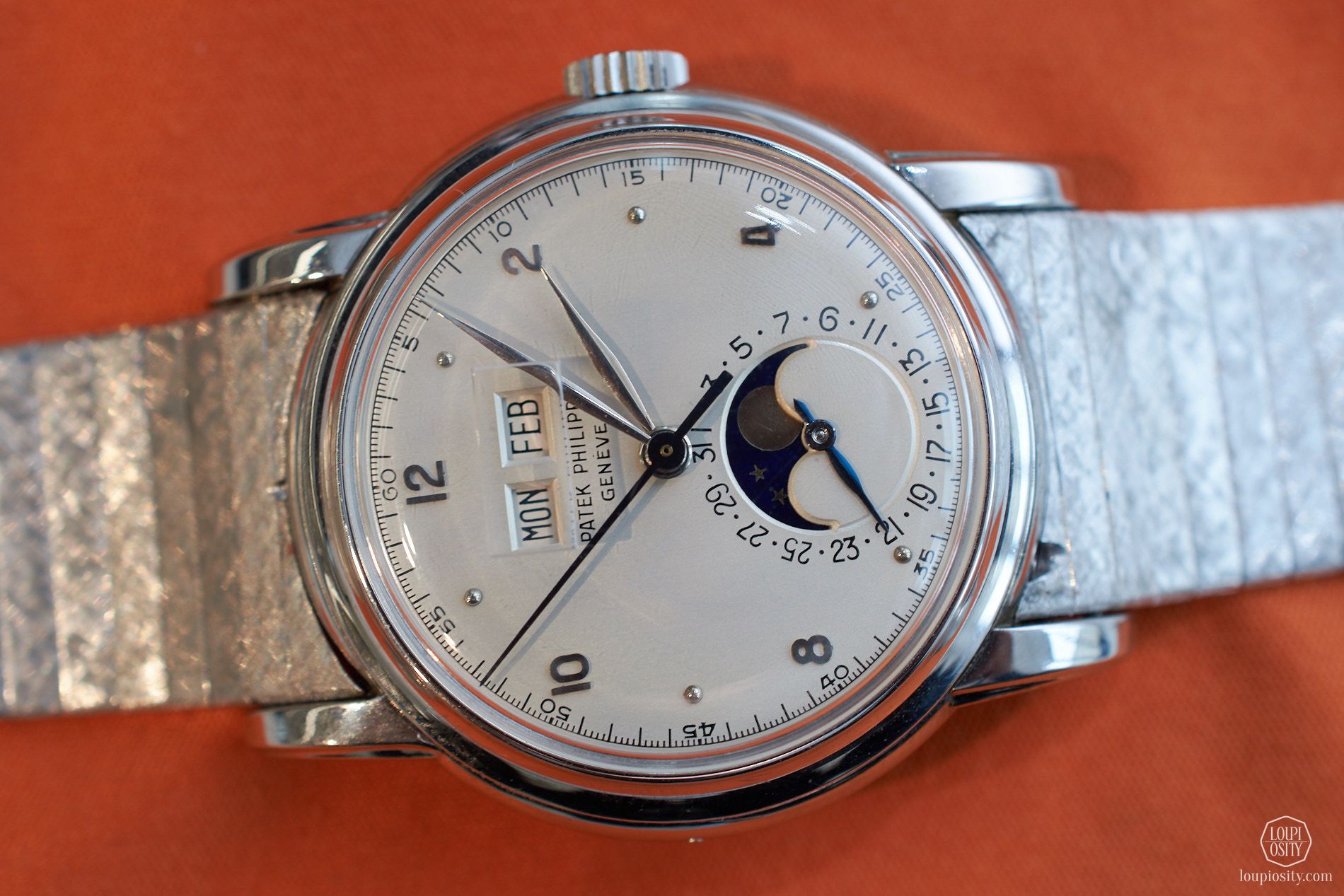 Around the 1950s, much of the Earth’s untouched depths and summits were under siege by explorers. George Band participated in the 1953 British Mount Everest expedition, which was the first to have confirmedly conquered it. In 1955 he was also there in the first team to reach the summit of Kangchenjunga at the border of Nepal and India.

His family is now offering the Rolex Explorer Ref. 6150 he wore during the climb to Kangchenjunga. It is also stated by the engraving on the back: “Kangchenjunga 1955 G. C. Band”.

Rolex made his steel Ref. 6150 in 1953 and gave it to him for the mission. Such a strong provenance is a thrill for enthusiasts. 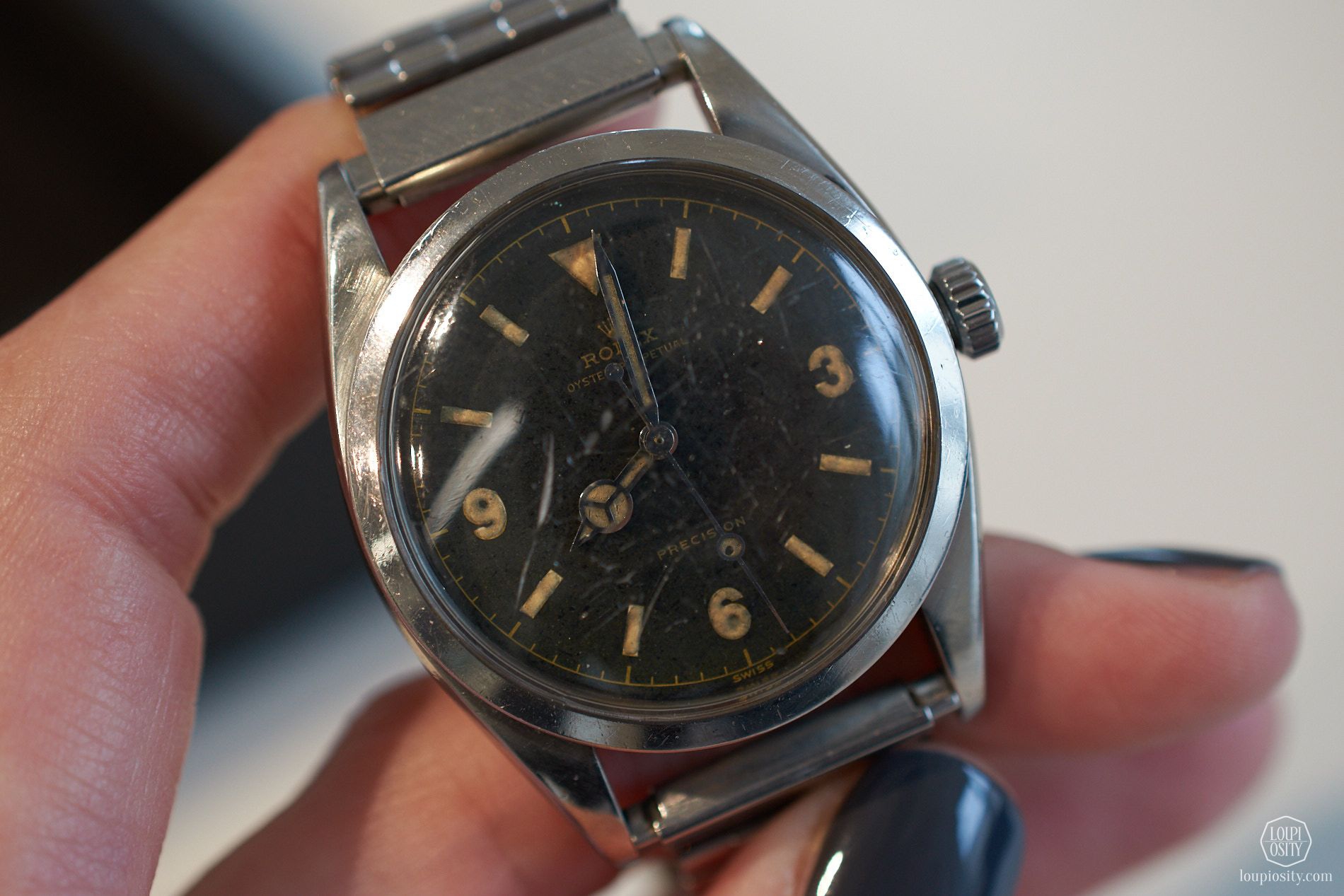 Patek Philippe introduced the Ref. 1415 world-time wristwatch based on the mechanism of Louis Cottier in 1939. It was a single crown model with cities engraved on the bezel which could be adjusted manually. The model was in production until the mid-50s and then in 1953, the present Ref. 2523 was issued, which had the city disk control on the second crown at 9 o’clock. Not many were produced due to the moderate sales figures. From the Ref. 2523/1 (smaller crown) version there are only 10 known yellow gold examples. The world-timers were in production only until the end of 1960 and the complication came back in 2000 with the introduction of the Ref. 5110.

The present piece is from 1964 and is 18k yellow gold with a nicely preserved 36mm case. 41 cities are inscribed on the disk. 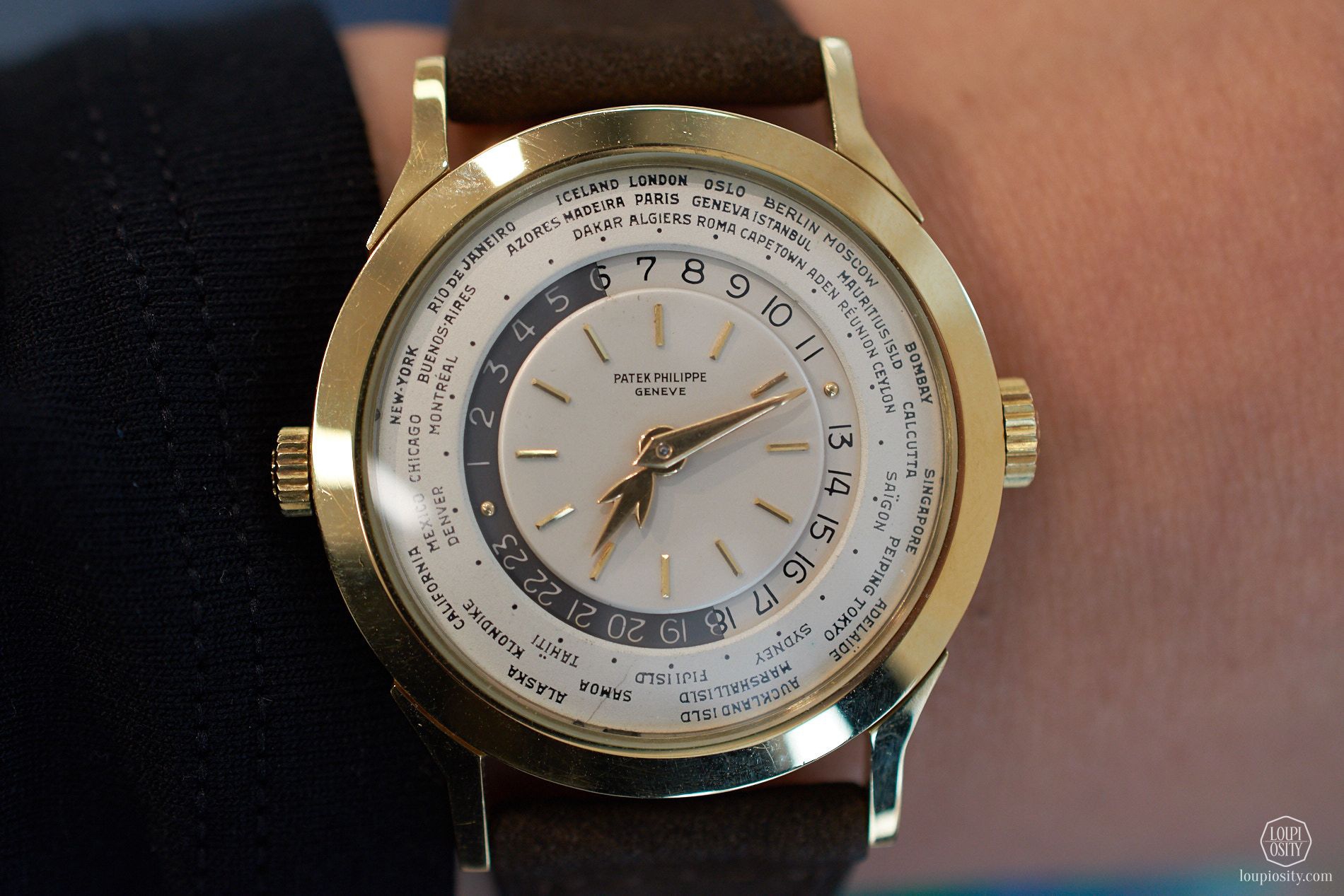 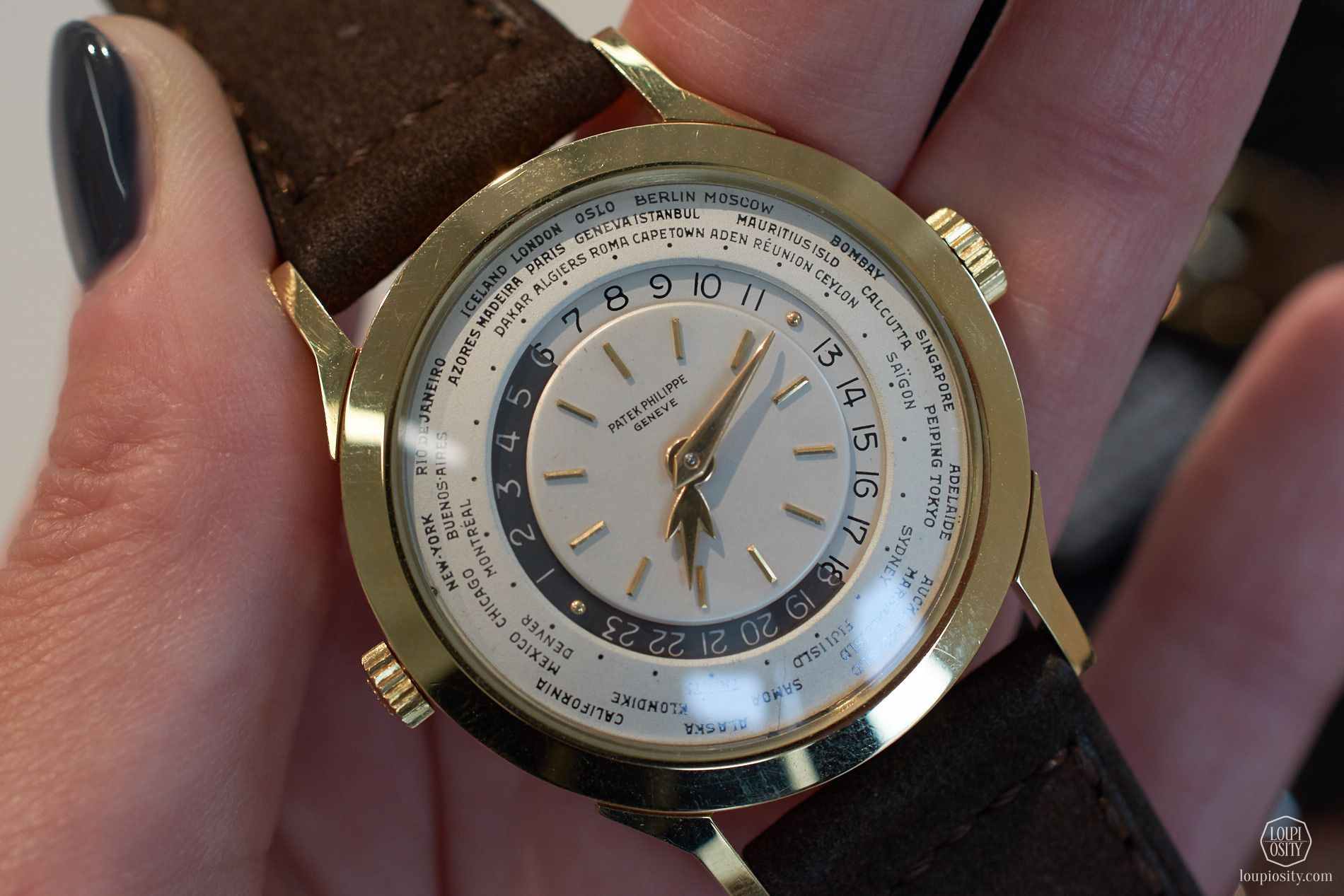 You can find the complete auction catalogue here.

Double Signed: A Celebration of the Finest Partnerships… Two auctions by Phillips Watches in Association with Bacs & Russo make their mark in the 2019 Fall watch sales scene. A gathering of 50 important Double Signed pieces will kick off the auction weekend on 9 November.Phillips Geneva Watch Auction: XIV Phillips Geneva Watch Auction: XIV will be held on 5 and 7 November in Geneva. There will be two sales events on the two days with very interesting haute horlogerie rarities.Zenith x Phillips - The Zenith El Primero One-Off In… In 2019, Zenith celebrates the birth of its star, the El Primero movement. Lot 136 at the Geneva Watch Auction X is a special anniversary piece, co-designed with Phillips Watches in Association with Bacs and Russo with attributes never found on Zenith watches. The sale supports the NGO Zoé4life.