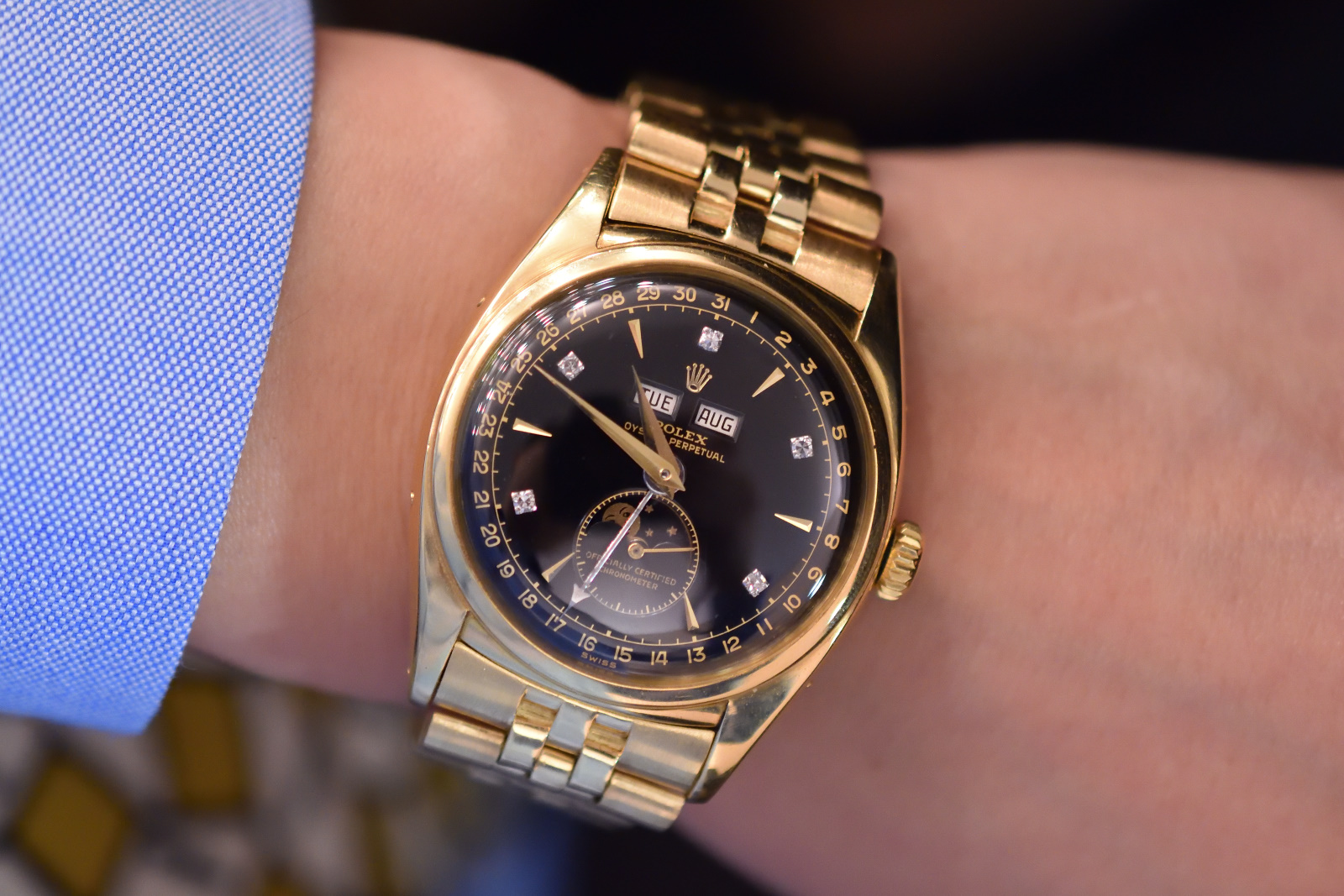 Already customary and awaited, this spring Phillips – in association with Bacs & Russo – gathers the crowd again to Geneva for their spring sale of collectible pieces. Geneva Watch Auction 5 (GWA5) takes place at Hôtel La Réserve in a double evening show by Aurel Bacs on Saturday and Sunday, 13 and 14 May, 2017.

Hard as it may sound, we selected few examples, which have moved us in particular. The following articles are dedicated to them.

Rolexes live a busy auction life these years. Beautiful rarities surface at the right time to ride the rising waves, which fuel the interest and prices even further. There is no Phillips watch auction without a number of important Rolex examples – see our selection from the 2015 Hong Kong sale, the amazing Rolex “La Caravelle” Enamel Watch from the GWA2 (2015), the Rolex Ref. 4113 split seconds chronograph (1942) from the thematic Start. Stop. Reset. Chronograph auction (2016), or the steel 1970 Rolex Daytona Ref. 6263 made for Tiffany sold at the GWA4 (2016). Last November Phillips even dedicated a sale to Rolex Milestones: 38 Legendary Watches That Shaped History.

This year Rolex introduced the Cellini Moonphase with calibre 3195, causing a fair bit of excitement as the brand, known more for sports watches, revisited the date – moonphase complication. Those, which Rolex produced only for a limited period around the 1950s in two references: the 6062 and the 8171.

The Reference 6062 is one of the most complicated Rolex watches and certainly among the most sought-after collectors’ pieces. It has the triple date functions (month, day and moonphase) organised in a layout with month and day display in two neighbouring rectangular apertures and the date indicated by a hand on the peripheral scale of the dial. This reference was launched at the Basel fair in 1950.

At the 2017 GWA5 auction, the voice of Aurel Bacs will cause a fair bit of excitement when announcing the two magical examples of Rolex 6062’s for sale.

Due to their value and wear-resistance, stainless steel watches were designed for everyday use and they were sold for less than their siblings made of precious metals. Good condition among the surviving steel watches is very rare. These circumstances raise the estimate of the present incredibly well preserved unit to the CHF 600,000 – 1,200,000 range.

It features the waterproof Oyster case, screw down Oyster case-back and a steel Rolex Jubilee bracelet. Arabic numerals at 3 and 9 o’clock are on the dial with the Rolex crown at 12 o’clock and a moonphase just above 6 o’clock. 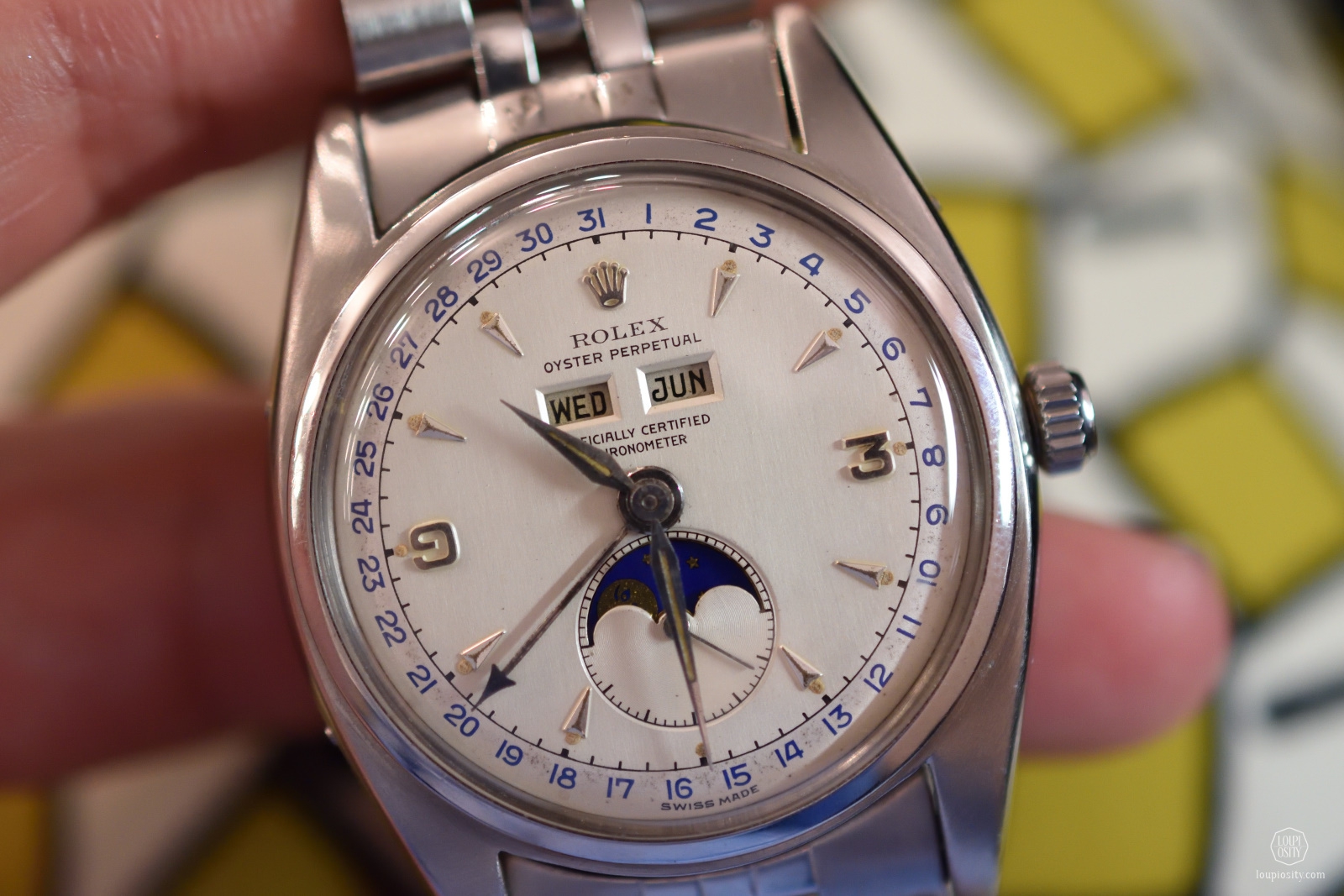 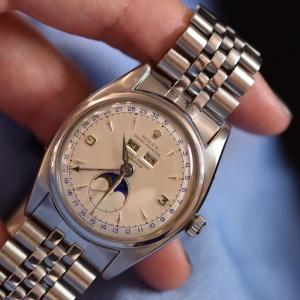 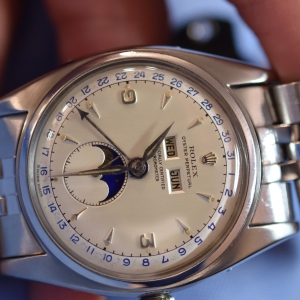 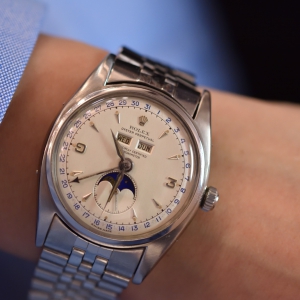 The examination and valuation of jewellery and watches are based more or less on these criteria: material, period, signature, provenance, design/construction (movement), rarity, condition and a certain “X factor”. The auction market – especially for vintage watches – is not the most rational or logical marketplace at all. However, is definitely among the most passionate.

The present lot is suggested to be the “most expensive Rolex ever sold at auction” with an estimate “in excess of CHF 1,500,000” in the auction catalogue. This special piece is inseparable from the name of Bao Dai, the last emperor of Vietnam.

Being the daughter of diplomats, one of my friends spent a considerable amount of her childhood in Vietnam. Just as I did in connection with Speake-Marin’s Dong Son Tourbillon, I turned to her and her father again. Besides being a diplomat, he is also a respected cultural and political science expert, specialising on Vietnam, Indochina and Southeast Asia.

Bao Dai (or Bảo Đại, meaning ”Keeper of Greatness”) was born Prince Nguyen Vinh Thuy on October 22, 1913. He studied in Paris, France and returned to his country to take the throne in 1932. Phạm Quỳnh served as a government minister under the Emperor. As a monarchist, he tried to help the young ruler to become a role model; therefore he created the image of Bao Dai as someone, who is “dyed with the new but never forgetting the old” and a vivid supporter of “national people’s education”. (source: David G. Marr, Vietnamese Tradition on Trial, 1920–1945, UCP, Berkeley, 1984, p. 69)

For five years during World War II, Indochina was a Vichy French administered possession of Japan with an agreement to Bao Dai for him to retain his position. The Japanese imprisoned the Vichy administration in March 1945. When the Japanese surrendered, the French gained control again in 1946. In these turbulent years Ho Chi Minh (Vietnamese Communist revolutionary leader, and key figure in the foundation of the Democratic Republic of Vietnam) and his party declared themselves to be Vietnam’s new rulers. He convinced the Emperor Bảo Đại, who was held as a puppet of the French, to abdicate and remain a ”supreme advisor’’.

On 19 December 1946, HoChi Minh declared war against the French Union, which was the beginning of the first Indochina War. This time Bao Dai was mostly living in Hong Kong, China and Europe. Throughout the years he became generally known as the “Playboy Emperor” as he enjoyed a considerable reputation for self-indulgence. In 1949 he was invited back by the French as a “head of state”, but without real governing power.

In 1954 a peace treaty was signed between the French and the Việt Minh (Vietnamese Revolutionary Organization), known as the Geneva Accords.

From 1955 he spent his time in Europe, mostly France and fulfilled his lavish lifestyle. Bao Dai was a man of taste, let it be villas, yachts, cars or watches. Following his death on 30 July 1997 in Paris, The New York Times published an article about his life, revealing interesting details about where his lifestyle has taken him: “Having squandered most of his royal fortune, he spent the final years of his life in a modest Paris apartment. In 1972 his 84-year-old mother, who remained in Vietnam after his departure, was reported to have sold off the family porcelain to help her only son in his exile.”

As the story goes, when Bao Dai came to the Geneva Conference (which was to restore peace in Indochina) he paid a visit to a Rolex dealer, Philippe Beguin. He wanted the very best, a real “royal” watch. So the dealer contacted the Rolex headquarters and presented a yellow gold, black dial 6062, fitted with 5 diamonds and 6 applied gold indexes. The look is completed with a yellow gold “Jubilee” bracelet.

The layout of the dial is also interesting. On the 6062 models Rolex put the “Officially certified chronometer” sign just below the day/month windows (like the lot 172 of the present auction). This concept is true to the dials with star indexes, the so-called “Stelline”. The rarest are the diamond indexes, such as the current lot. On this watch, one diamond is placed at 12 o’clock, so Rolex put its crown mark somewhat lower. It meant that the chronometer script did not fit anymore under the day/month apertures, thus it was placed in the moon phase area. I love the result, which plays with the symmetry – asymmetry balance.

This watch first came to market and was sold in 2002 for a record sum at the Phillips, de Pury & Luxembourg auction house – for CHF 370,000.

Now Phillips offers this Rolex milestone 15 years later in a spectacular and unrestored condition. So the excitement among the watch lovers is guaranteed once again! 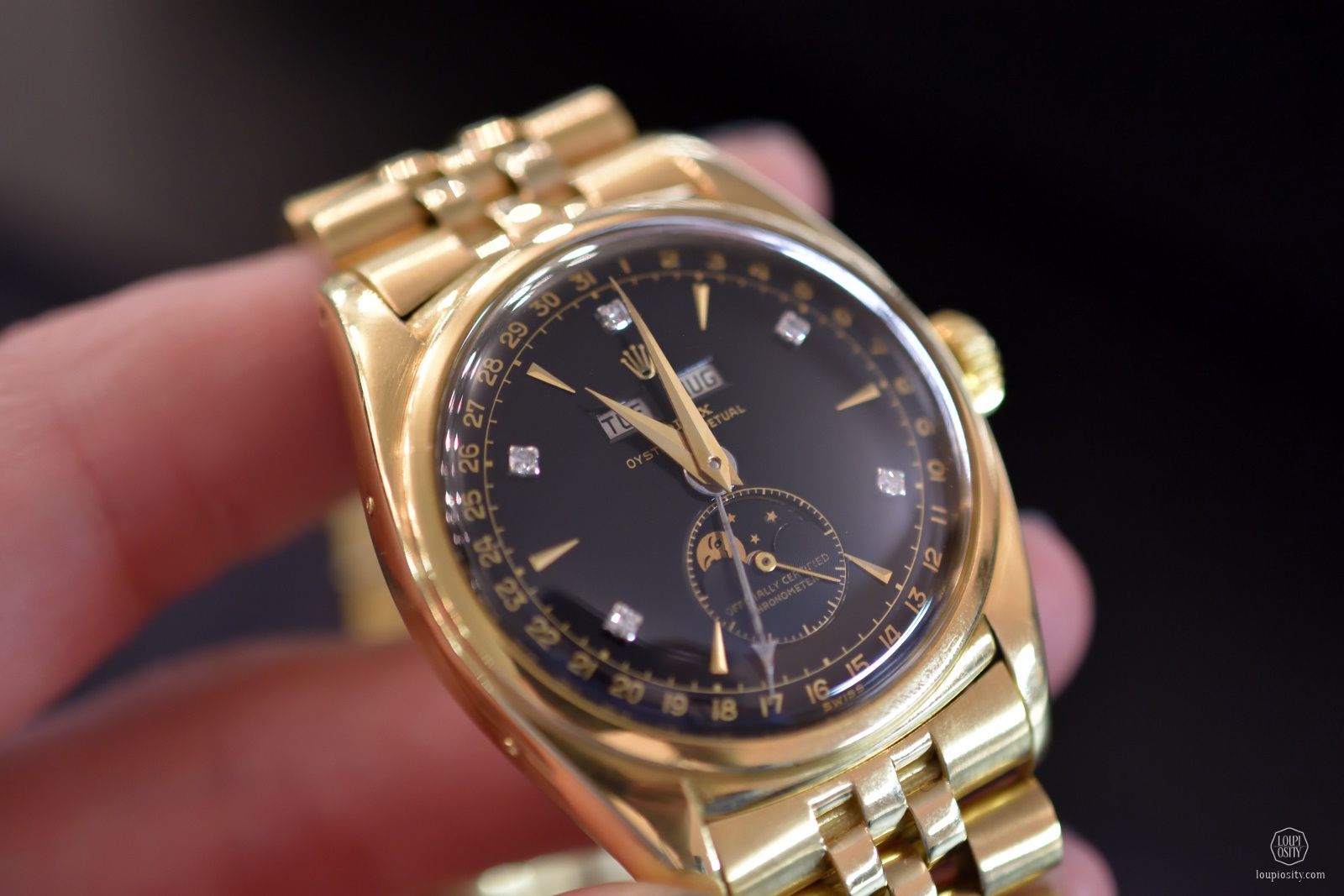 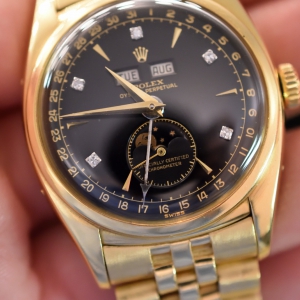 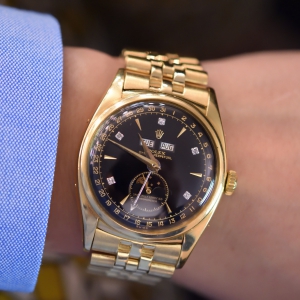 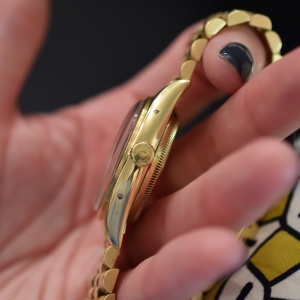 Phillips Geneva Watch Auction: XIV Phillips Geneva Watch Auction: XIV will be held on 5 and 7 November in Geneva. There will be two sales events on the two days with very interesting haute horlogerie rarities.Phillips - The Geneva Sessions Besides the brands, the watch department at Phillips auction house also showcased some of the world's finest collectors' watches at the Geneva Watch Days.Christie’s Luxury sale in Geneva, November 2022 - Part 1 Christie’s Luxury sale series returns to Geneva this autumn, including highlights from the finest wines, historic vintages and limited edition watches to the rarest diamonds. We selected a few interesting lots from the preview.