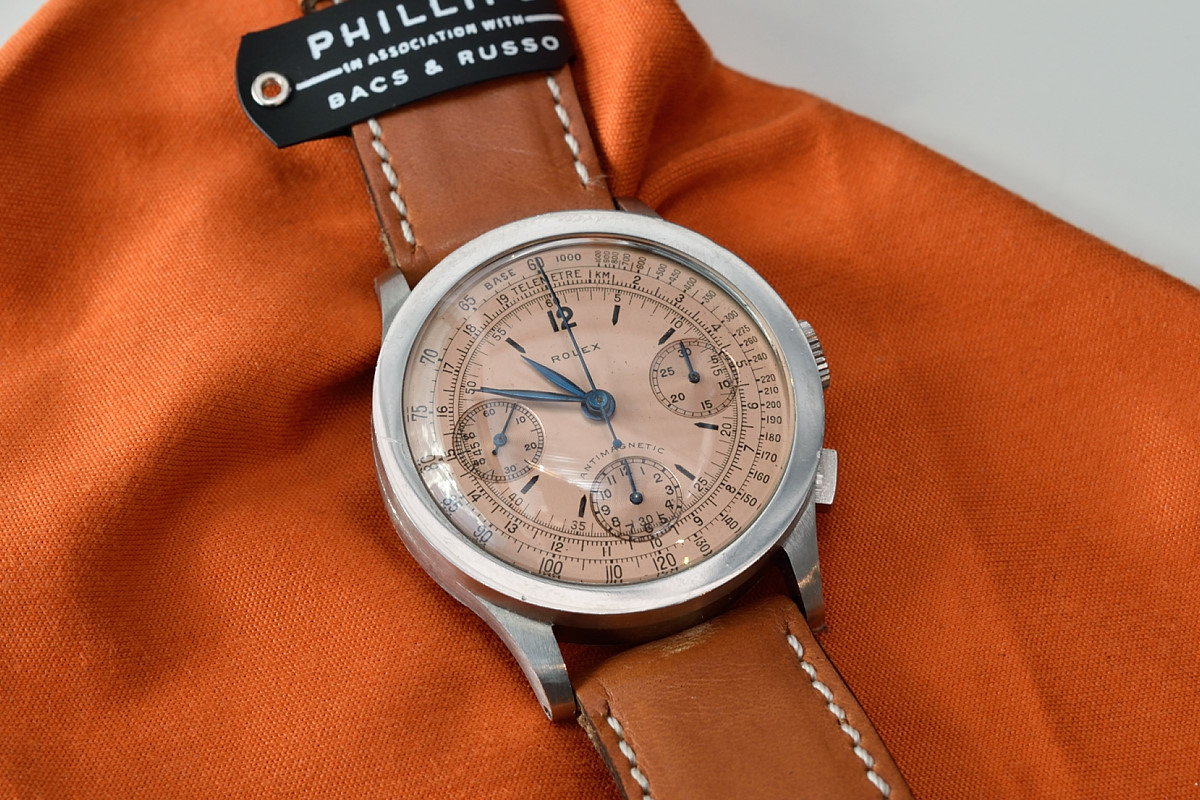 Less than two years ago in November 2014, Phillips announced the launch of its watch division in collaboration with Bacs & Russo (SA). The concept was made clear: the group will host thematic auctions and apply strict selection criteria in terms of quality, rarity and originality when looking up the stars and forgotten big guns of fine-watchmaking. Thanks to the highly regarded line-up of watch specialists, Phillips has access to some of the world’s most important collectors and trades in well-preserved rarities of past centuries. Auctions are held every six months with the strongest variety of pieces in Geneva and in Hong Kong – and soon in other locations, such as New York.

Last October Sam Hines, the Head of Phillips’ International Watch Department raised the temper further in Hong Kong by showing us the lots of three Autumn auctions: The Only Watch, The Geneva Watch Auction: TWO, and the Phillips Watches Hong Kong sale all held in November 2015. Sales in 2015 reportedly raised to the range of US $80m.

May 2016 brings in fresh excitement for connoisseurs.

Last week I met Paul David Maudsley, International Specialist and Director, in Phillips’ 30 Berkeley Square building who managed to lure out the shy London sun by presenting some of the most astonishing chronographs and unique lots on Phillips’ top floor. The pieces laid in front of me will be fought for in three auctions: START-STOP-RESET: 88 Epic Stainless Steel Chronographs, The Geneva Watch Auction: Three, and The Hong Kong Watch Auction: Two. 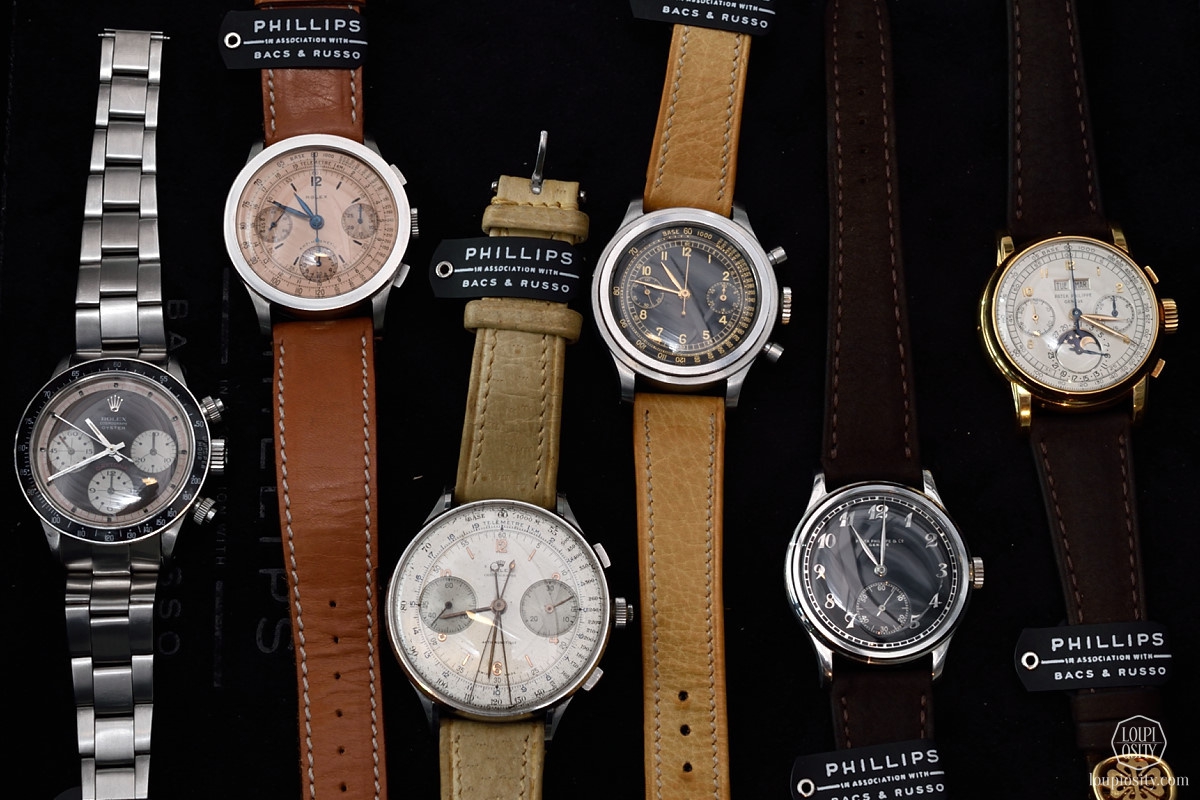 On 14 May 2016 the Hôtel La Réserve in Geneva will present the scene for a thematic gathering to trade 88 outstanding examples of steel chronographs.

Chronographs, the first example of which was made by Louis Moinet in 1816, measure time intervals. Frenchman Nicolas Mathieu Rieussec created his device to time horse racing and record the elapsed time with an ink spot on the dial, hence the name “chronos” for time and “graph” for write. Many worked on splitting the running and the “frozen” seconds, like Abraham-Louis Breguet (1826), Frédérick Louis Fatton (1828) and Joseph Thaddeus Winnerl (1831). A system, incorporating a cam-actuated lever, to reset the timer to zero was developed by Adolphe Nicole (1844) that resulted in the start, stop and reset functions we use today and that appear in pocket watches. Driven by the achievements in aeronautics, timepieces and chronographs emerged in wrist-strapped versions and later in wristwatches, pioneered by Breitling (1933). The flyback mechanism that allowed the hand to start a new measuring period without stopping the chronograph was introduced by Longines (1936).

Chronographs are highly coveted in general, but the historic steel-squad lined up by Phillips Watches evokes a completely new level of desire. The selection was curated together with Pucci Papaleo, just as the pieces for the very successful Glamorous Day-Date auction a year ago. See a few of them below.

“Tre Tacche” refers to the three grooves on the case back that allows it to be screwed down. As discussed above, Longines was among the first to bring wrist chronographs to the market. In fact, due to its close involvement with aeronautics, car and horse racing, Longines placed strong focus on chronographs in the first half of the last century. The present reference 4974 is a still young-looking specimen of Longines’ early chronographs equipped with the calibre 13ZN that is the first movement with a fly-back function made in series. The dial is black lacquered with gold-coloured print. 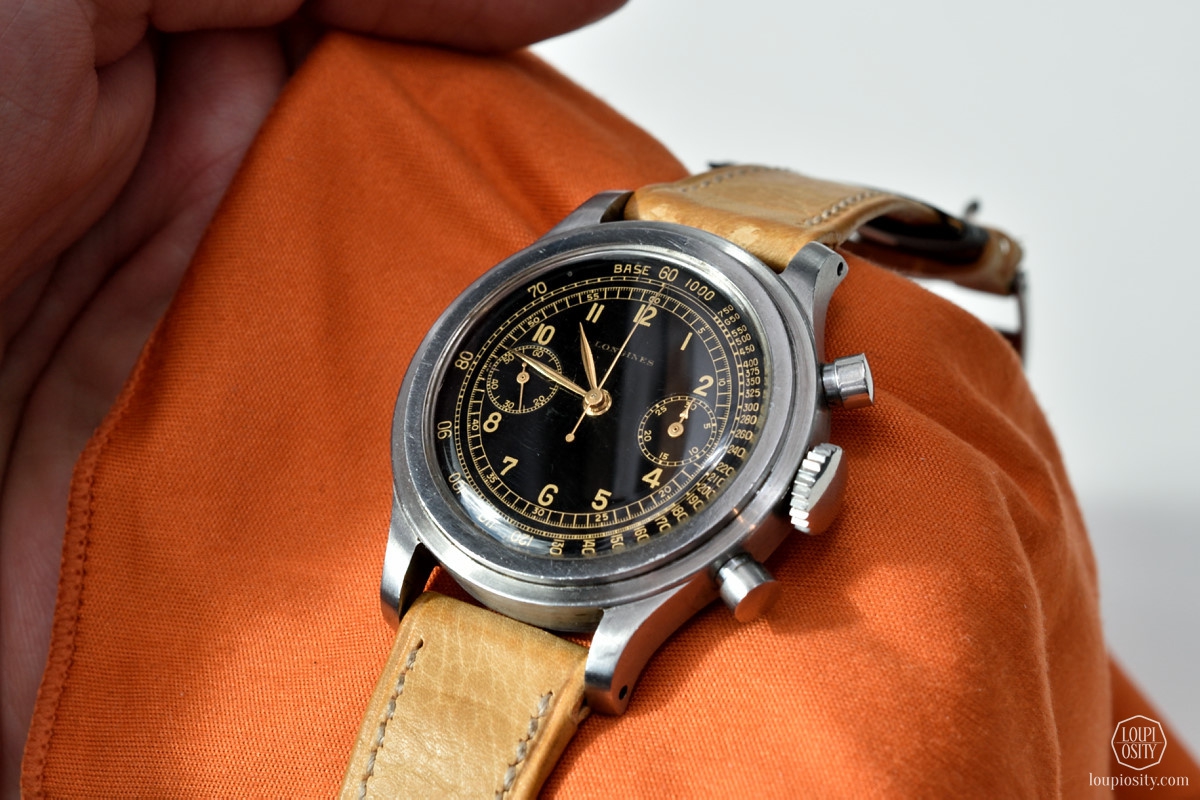 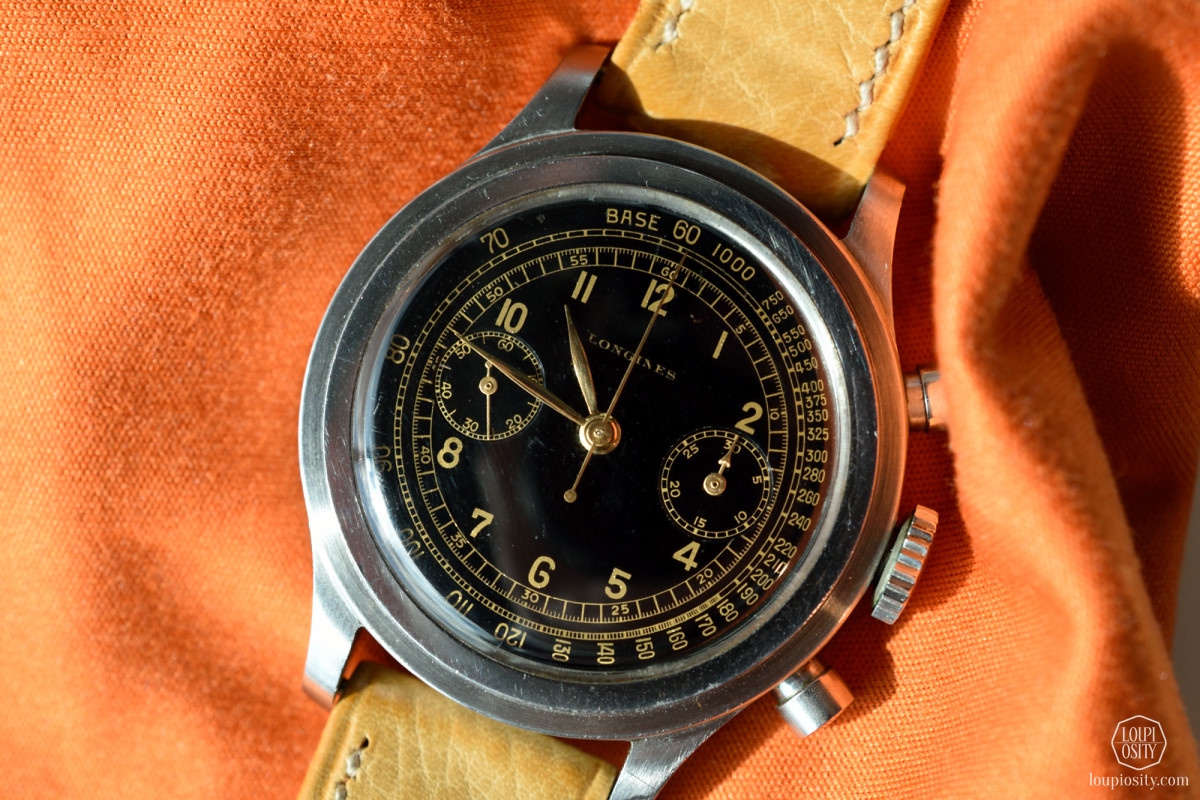 (If you are interested in reading more about Longines’ chronograph check out PH Zhou’s article here.)

“Rolex watch worn yesterday during driving record attempt and still going splendidly notwithstanding rough usage received.” – telegraphed Sir Malcolm Campbell to Rolex after his attempt to break the 300mph land speed record. Indeed, Rolex became associated with car racing leading eventually to the birth of the iconic Daytona collection in 1963. In 1942 the company produced 12 pieces of the present reference 4113 split-seconds chronograph, which – as per the investigation of Phillips Watches – have not been directly sold to the public, but given to car racing drivers and teams. One of the highlights of the upcoming auction has already been sold by Aurel Bacs for over CHF 1.1m during the Christie’s Important Watches auction in 2013. The calibre is the manual 55 VBR, which was placed in the largest diameter case ever produced by the company. 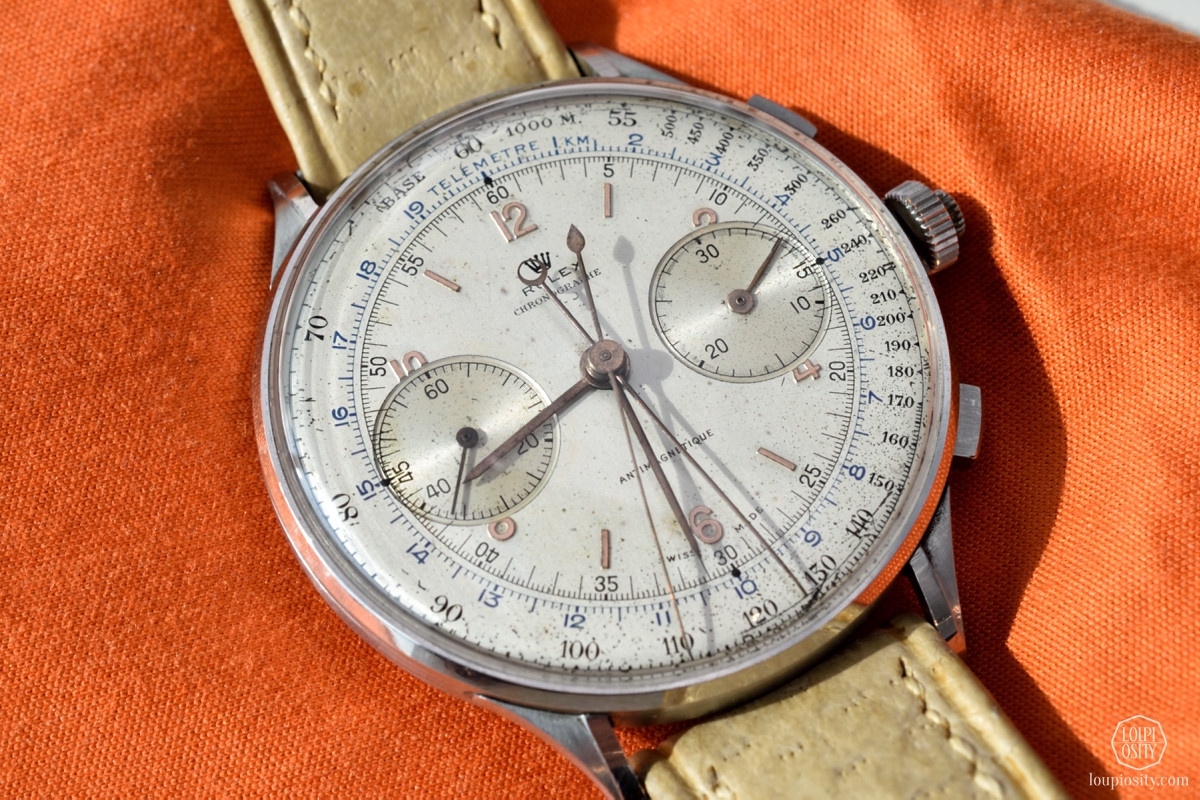 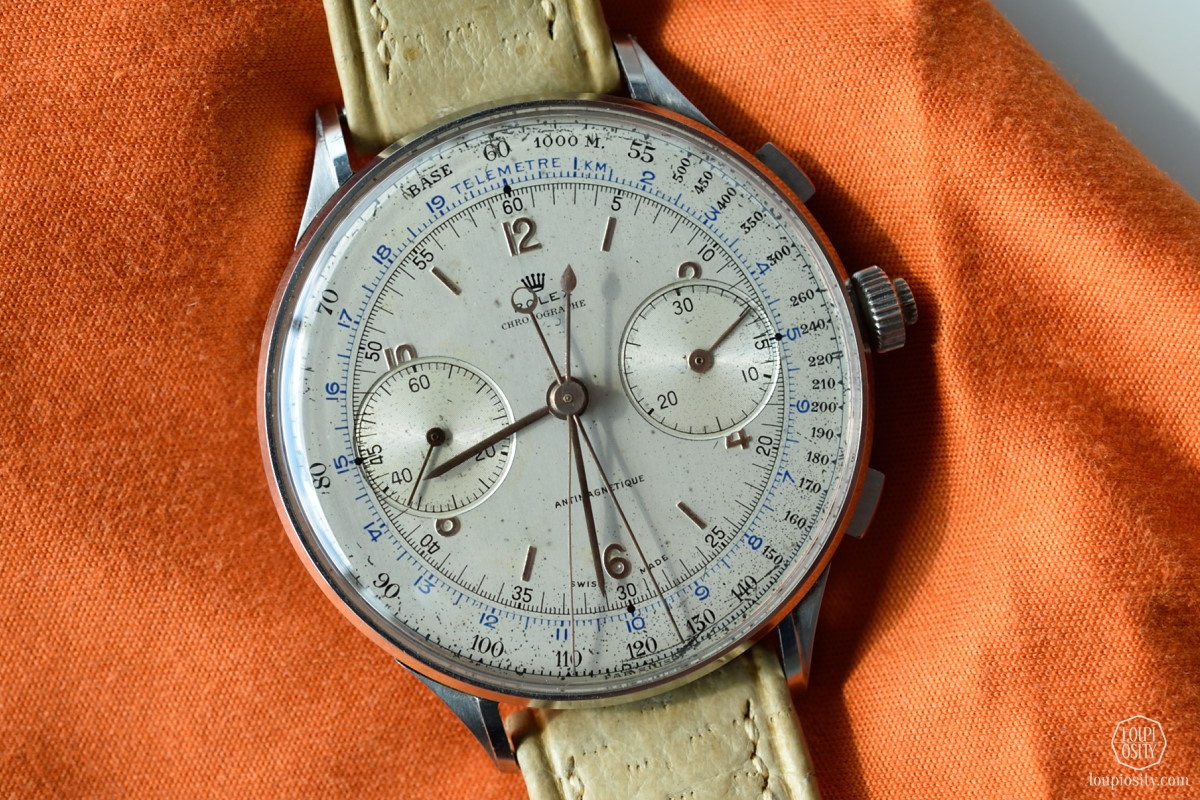 Just six years after the Cosmograph Daytona was born, this 6263 piece with a chocolate brown dial was made. It is one of the only two known pieces with such a configuration. A same reference but with black dial was auctioned on 10 November 2013 for CHF 989,000, making it the most expensive Daytona ever sold to that day.

The piece traded this May has a deep and even coloured brown dial with the red Daytona script over the chronograph hours sub-dial. Unlike on other Daytona models, the “Oyster” designation is placed under the “Cosmograph” on the Oyster Sotto. For greater water resistance this model was fitted with screwed-down “millerighe” pushers and the Oyster Twinlock 700 crown, which have brought an unexpected success to the Daytona. The movement is the Valjoux 727 manually wound calibre. 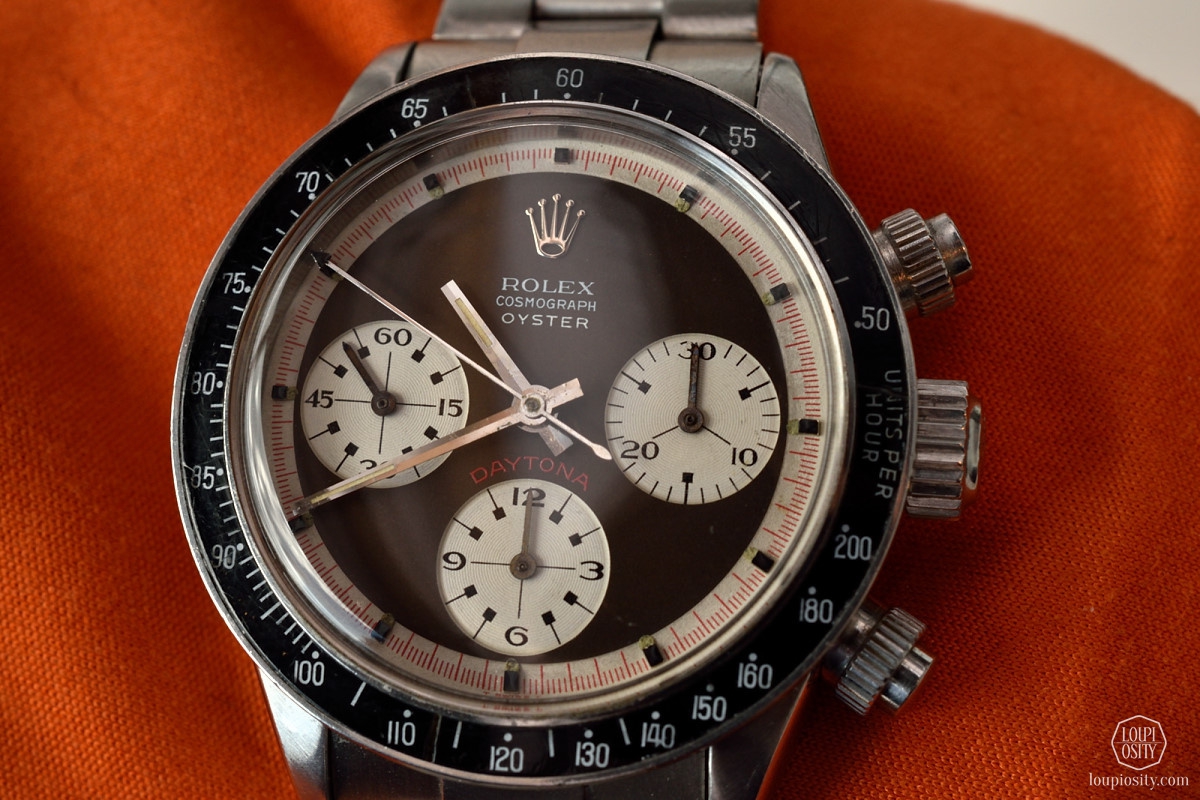 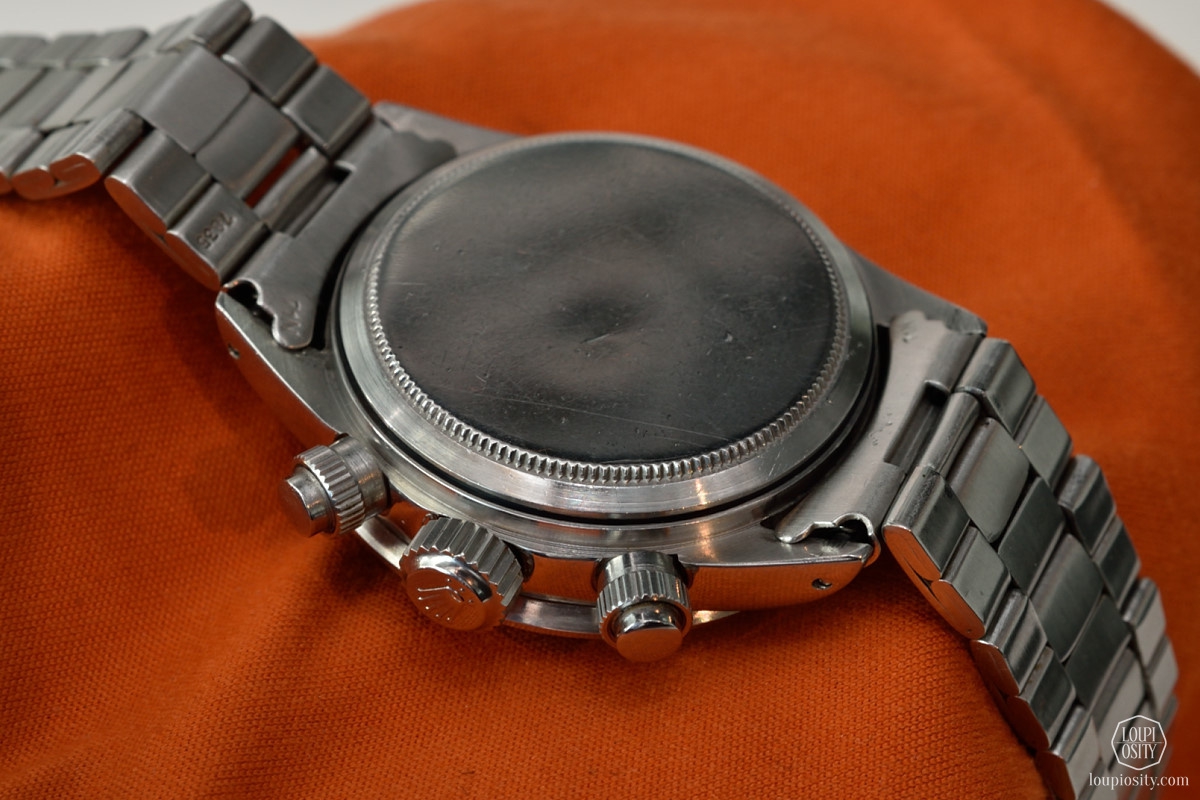 For the complete list of lots, please see the auction catalogue here.

The story continues with the lots of The Geneva Watch Auction: Three. Read on!

Phillips - The Geneva Sessions Besides the brands, the watch department at Phillips auction house also showcased some of the world's finest collectors' watches at the Geneva Watch Days.Phillips Geneva Watch Auction: XIV Phillips Geneva Watch Auction: XIV will be held on 5 and 7 November in Geneva. There will be two sales events on the two days with very interesting haute horlogerie rarities.TimeForArt TimeForArt is the first-ever benefit watch auction to support contemporary art, initiated by New York non-profit Swiss Institute. The auction will be part of the Phillips ‘New York Watch Auction: SEVEN’.