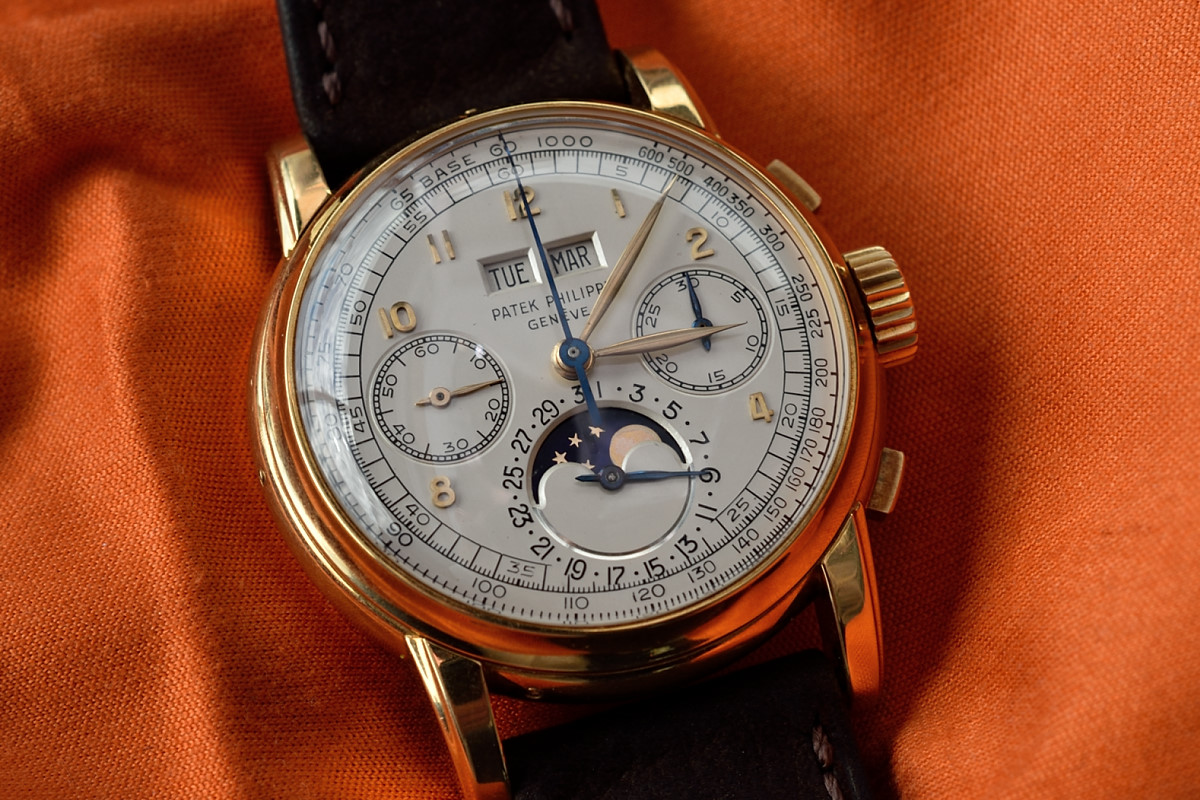 Less than 24 hours after Aurel Bacs stops selling the steel chronos (see the article here), he will stand on the dais again reset with the hammer in his hand and his energies pumped up to start the charismatic moderation between buyers over another 140 astonishing timepieces. The team of specialists will be glued to their phones with clients at the other end for the next hours to battle with each other just as the collectors who appeared on the site. The marathon of The Geneva Watch Auction: Three begins.

Let me bring a few watches to you as a teaser.

Enriching the line of chronographs on the May auction weekend is this important timepiece from 1956 by Patek Philippe. Only 349 were made between 1951 and 1986 from the complex chronograph and perpetual calendar featured reference 2499, an early specimen of which is presented for bidding. The first series of the model was made with two case styles, named after the maker: Vichet and Wenger. The watch for sale is perfectly preserved and is one of the 28 Wenger-cased models, which is somewhat larger than the Vichet and the caseback is domed. The case metal is 18k yellow gold. The extreme rarity, the fantastic proportions and the functional combination make it a landmark piece and a unique opportunity for collectors. 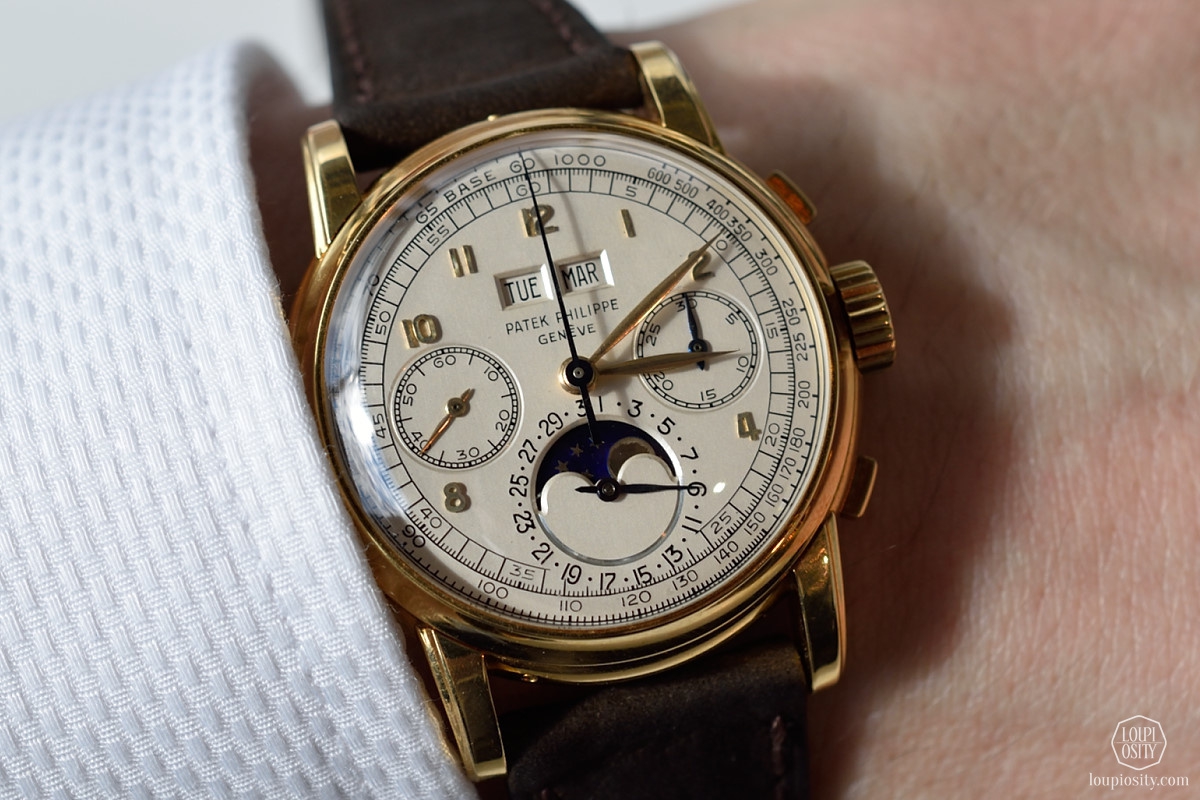 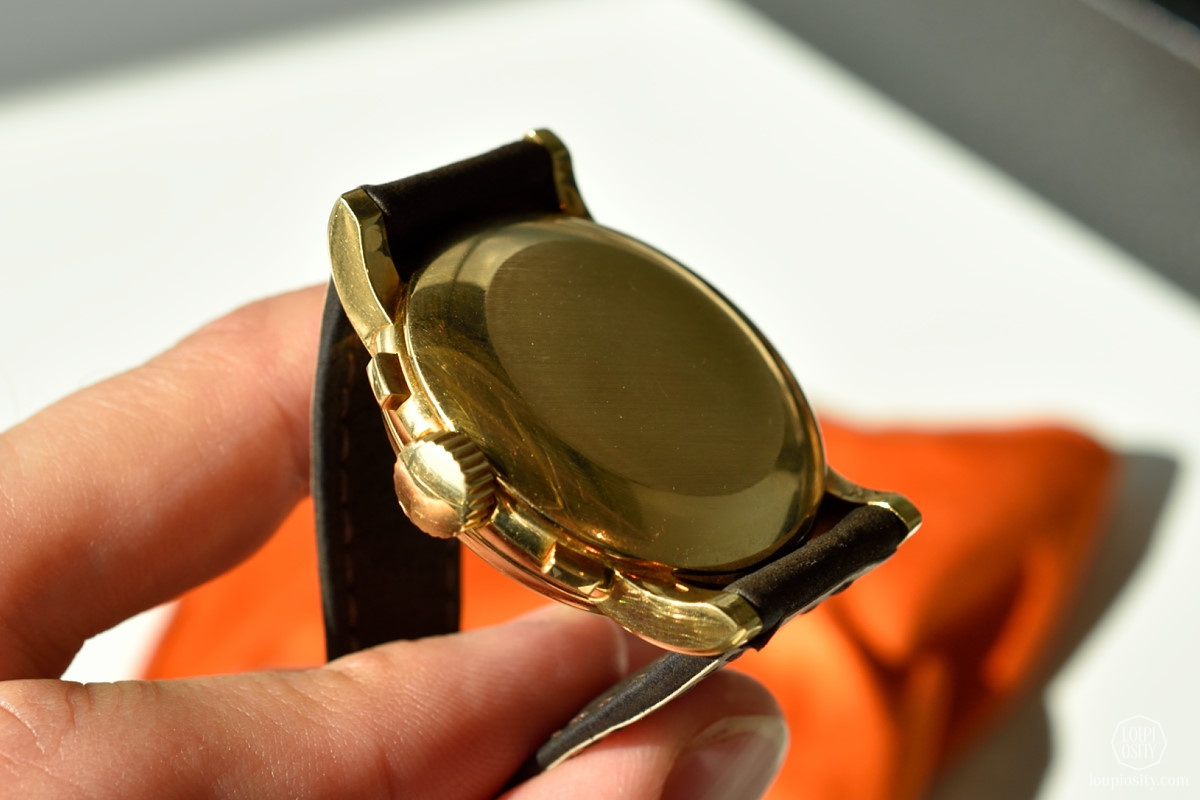 The Sultanate and I have had a love affair and I cherish long-lasting memories about the time I spent in Oman. The air is filled with the scent of frankincense and shisha, people are kind, happy and very proud of their rich history, culture and their leader Sultan Qaboos bin Said al Said, of course. His Majesty, whose reign started on 23 July 1970, has brought prosperity to Omanis. If you ever happen to travel through the region, make sure you visit Oman to walk the streets of Muscat, hike the 3,000m heights of Jebel Al Akhdar, drive the 4×4 in Sharqiya (Wahiba) Sands, dive in the coral-inhabited seas at Daymaniyat island or experience the monsoon in Salalah.

Watch connoisseurs get excited when Sultan Qaboos’ khanjar themed coat of arms or his signature appears on dials. He commissions brands to produce these, which serve as gifts to foreign dignities and loyal servants.

Lot #170 is a 1973 Audemars Piguet Royal Oak from the first series of the iconic watch, which defined the frameworks of mechanical steel sports luxury. As you can see on the back it is the 959th Royal Oak produced. The dial omits the usual “mini-tapisserie” pattern and the khanjar is surrounded by 12 brilliant-cut diamond hour markers. The calibre is the Automatic K2121. 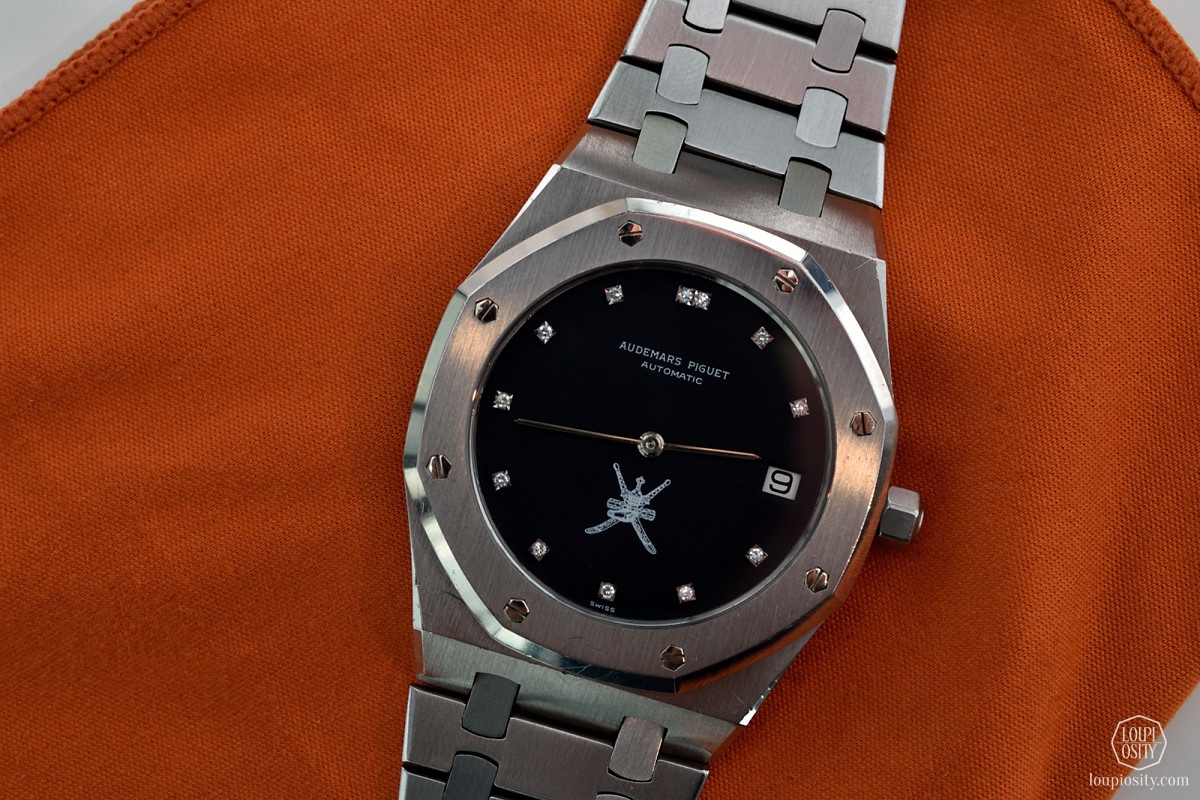 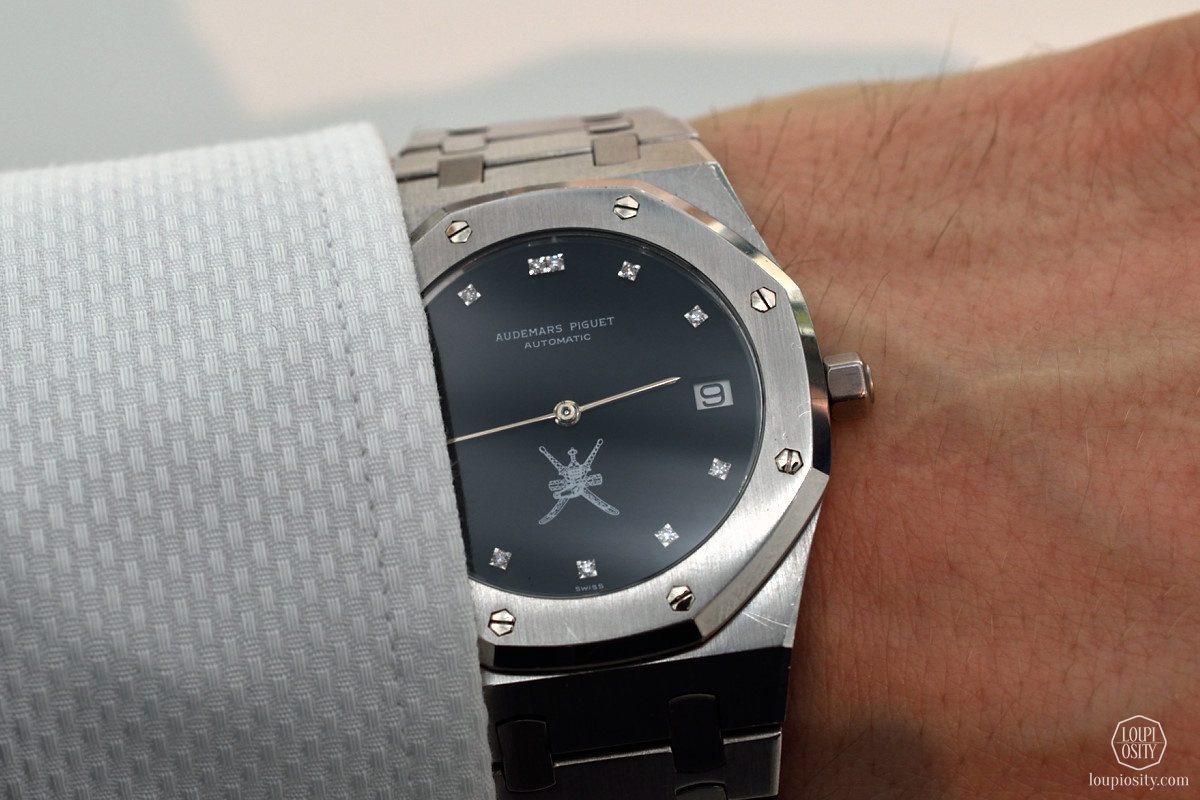 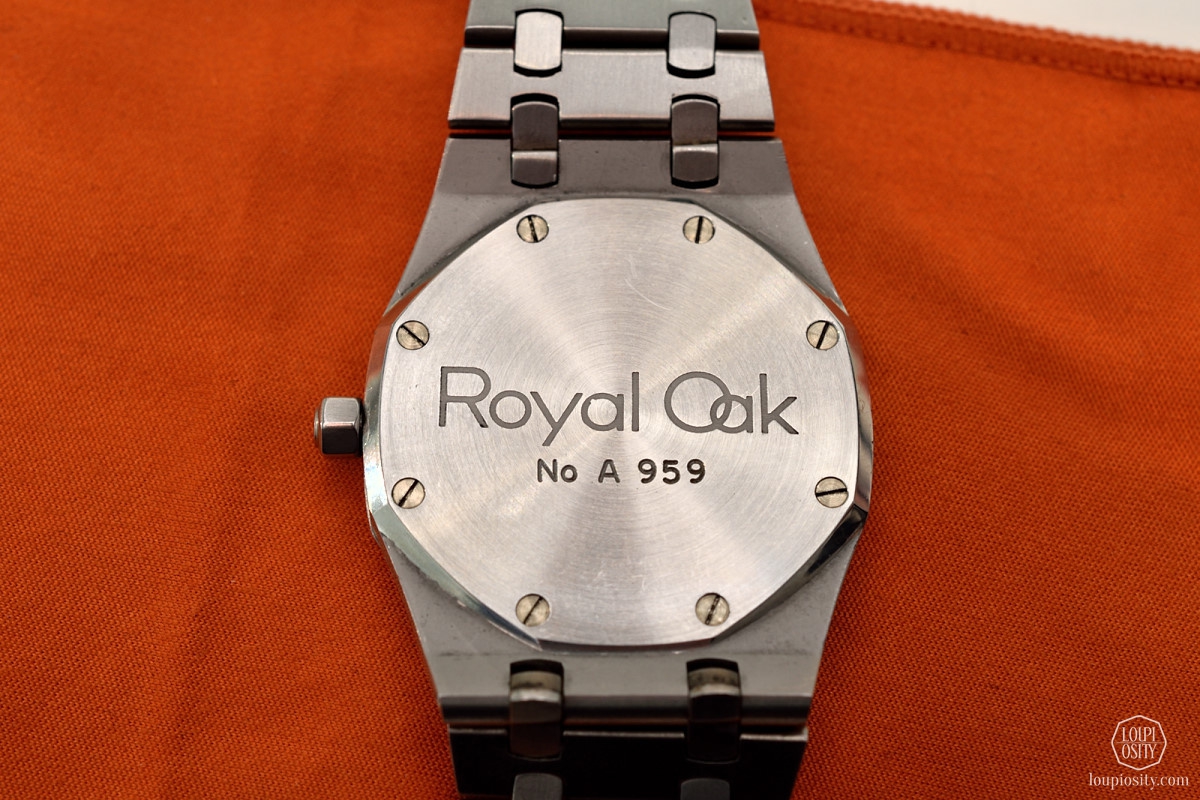 In the following unique piece simplicity married classical design. Patek Philippe produced this steel timepiece with a black lacquered dial and decent-sized Breguet Arabic numeral appliqués during WWII in 1941, which perhaps explains many of these attributes. Its beauty and exclusivity lifts the present piece to be among the highlights of the show, claiming the undisturbed attention of all Patek Philippe fans when bidding for lot #135 begins. 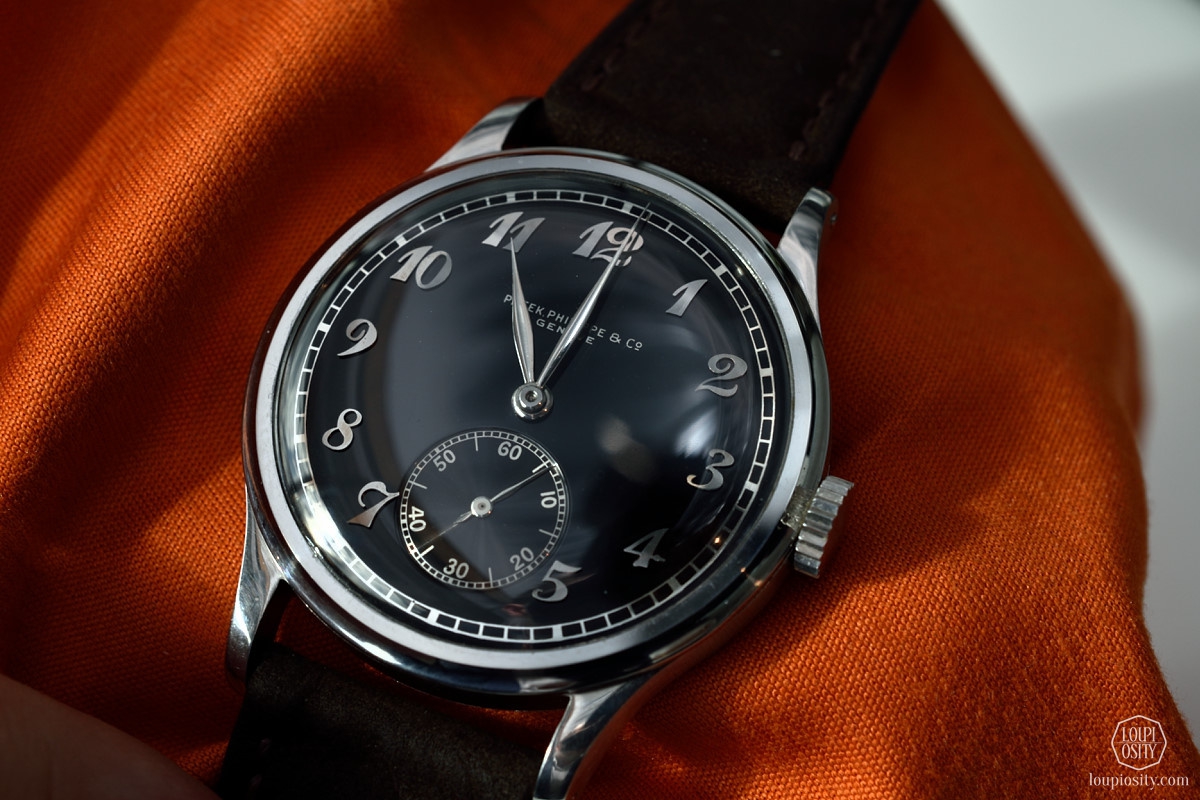 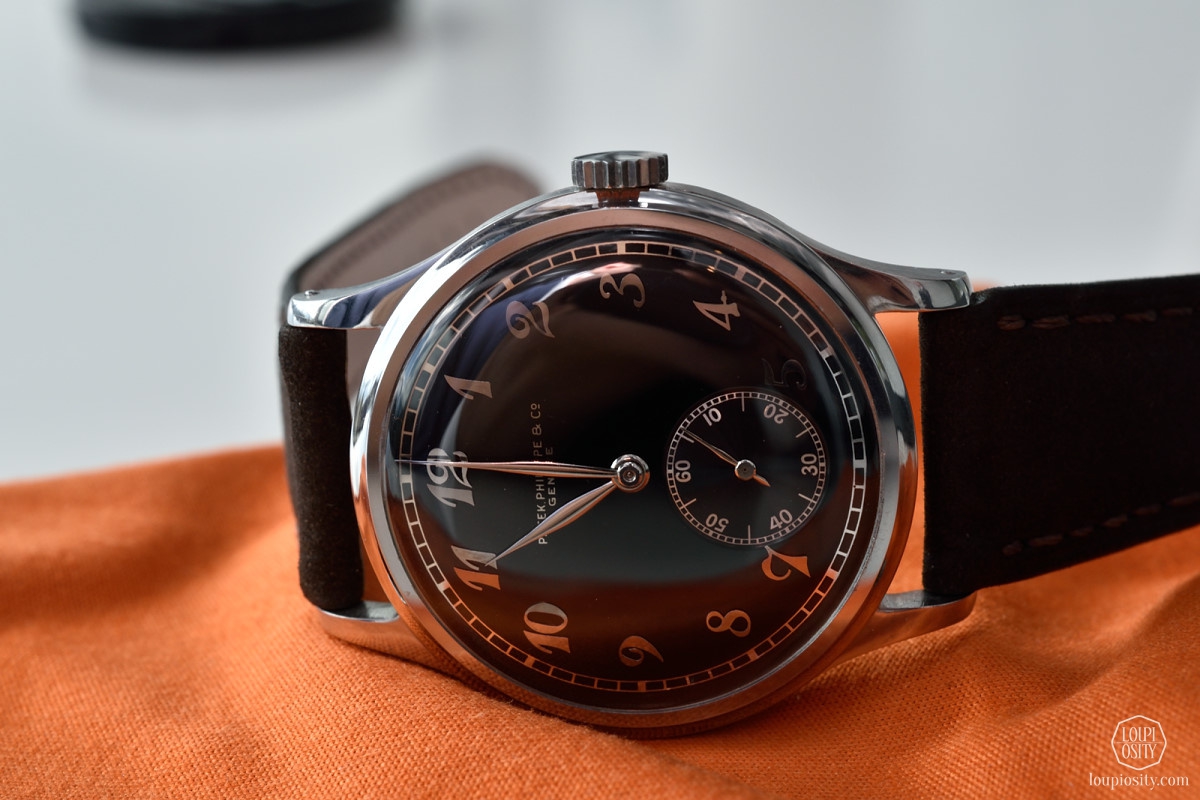 A very rare bird on the sky of dive watches. Tornek-Rayville is based on the Blancpain Fifty Fathoms Milspec (see the 1959 model in the gallery of this article), which was supplied to the U.S. Navy by Allen V. Tornek via his company Rayville. Only 1,000 were made, most of which were destroyed by the Navy at the end of their service, therefore any preserved timepiece are highly sought after. The present piece was made in 1966 and belonged to Sergeant Maurice Jacques, who used it for 30 years. The watch was with him during his Vietnam missions. The movement is the automatic TR-900 (a modified AS 1361 calibre) with enhancements such as hacking seconds and reinforced resistance to magnetic fields.
The watch comes with the original NATO strap and compass. 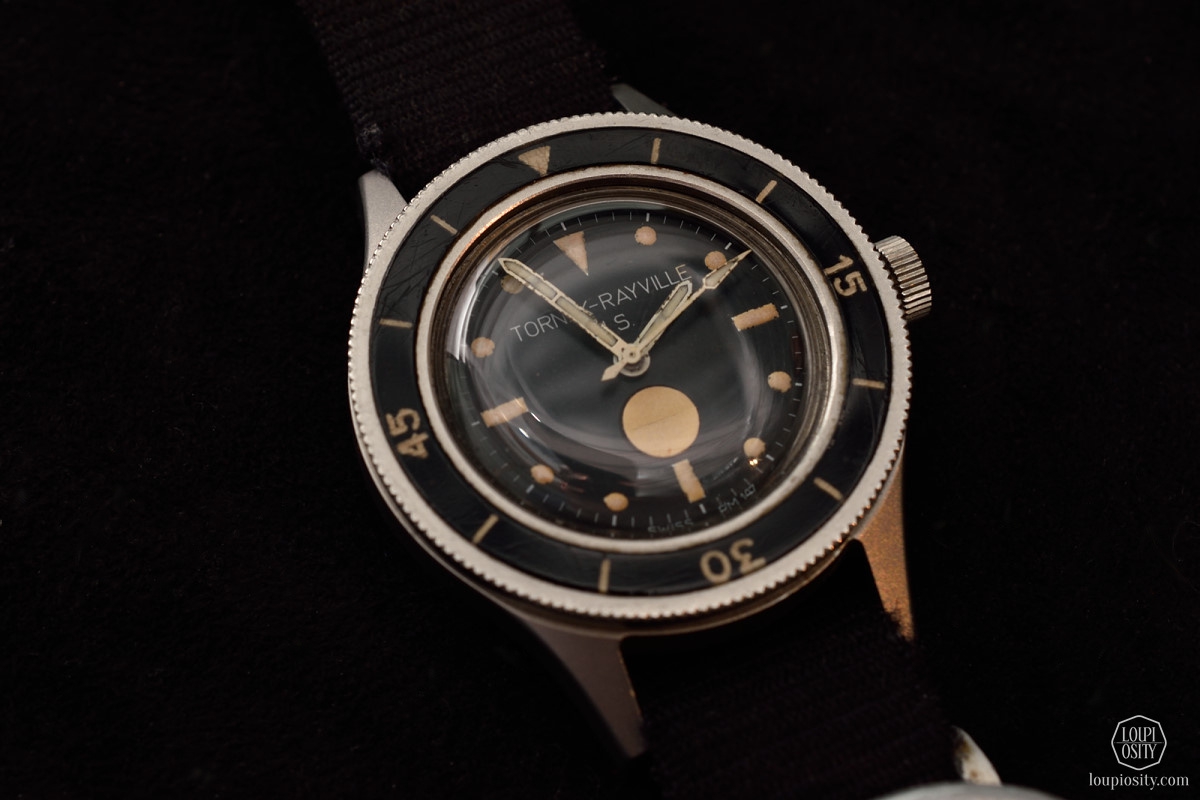 The following item was made in 1958 and in the same October was sold by the Hübner boutique in Vienna (Hübner had a Rolex concession until 1998). The Rolex GMT Master two time-zone watch was originally developed upon the request of Pan Am in 1954. The airline wanted to provide a timepiece to pilots that allows the simultaneous reading of the home or reference time and the destination or local time. The red, golden arrow-ended hand points to the hour in the second time-zone. The piece auctioned is remarkable for many reasons. First, it is from the first generation of the GMT Master collection in perfect original condition. Second, unlike most of the 6542 references, it is made of yellow gold instead of steel. Third, the fragile cognac-brown Bakelite bezel is unspoiled. 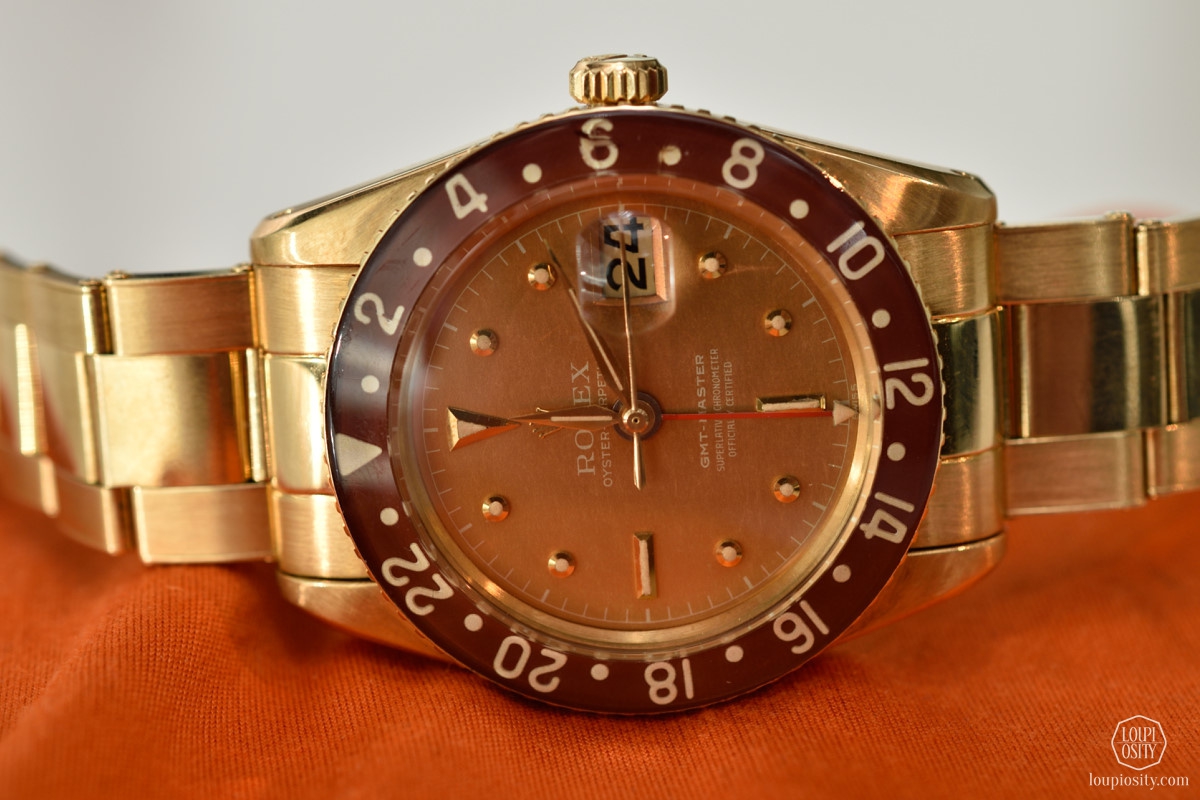 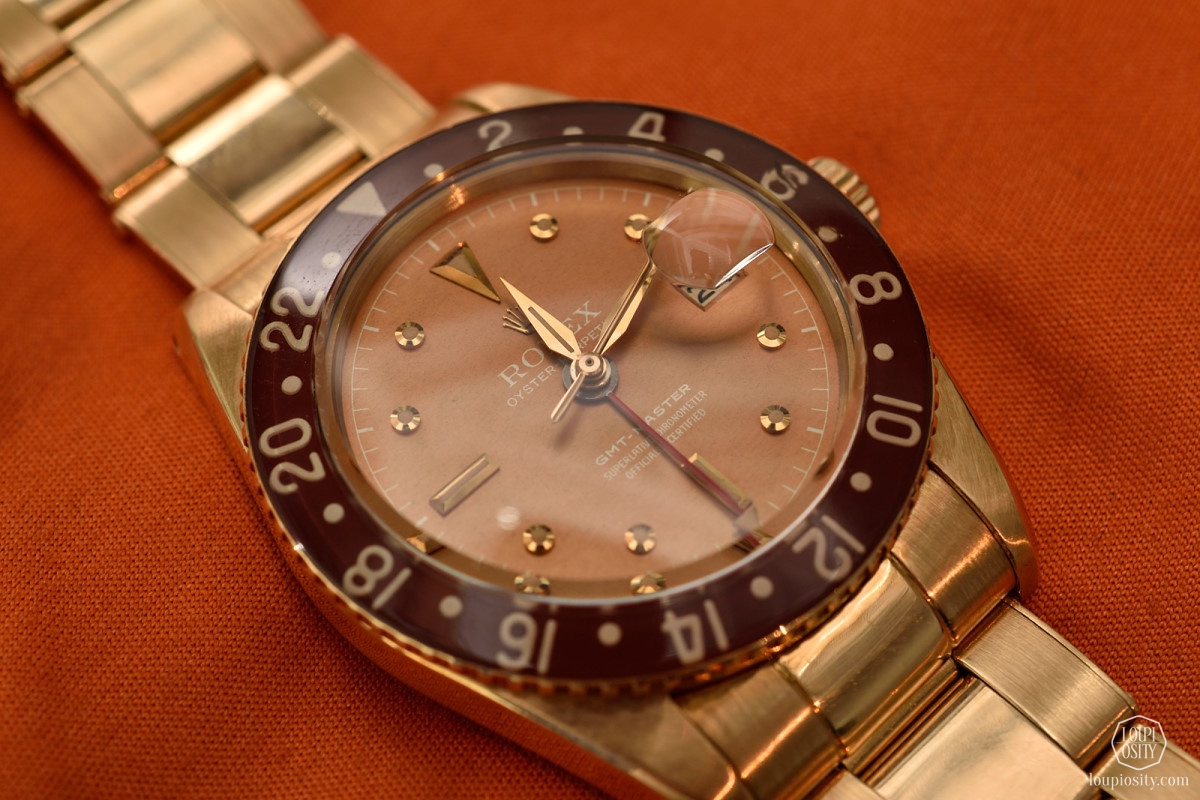 Living up to the ambitions of Phillips in Association with Bacs & Russo the team has been extended in the past 10 months. Following the successes of auctions delivered so far and matching the increasing demand, new locations such as New York have been added to the list of offices and soon-to-be auction venues. The extended team have yet again hunted down outstanding and significant timepieces for the May 2016 sale.

We look forward to feeling the tension and hearing the sound of the hammer on the START-STOP-RESET: 88 Epic Stainless Steel Chronographs, The Geneva Watch Auction: Three and The Hong Kong Watch Auction.

For the complete list of lots, please see the auction catalogue here.

Have you seen the pieces in the START-STOP-RESET: 88 Epic Stainless Steel Chronographs auction? Read on! 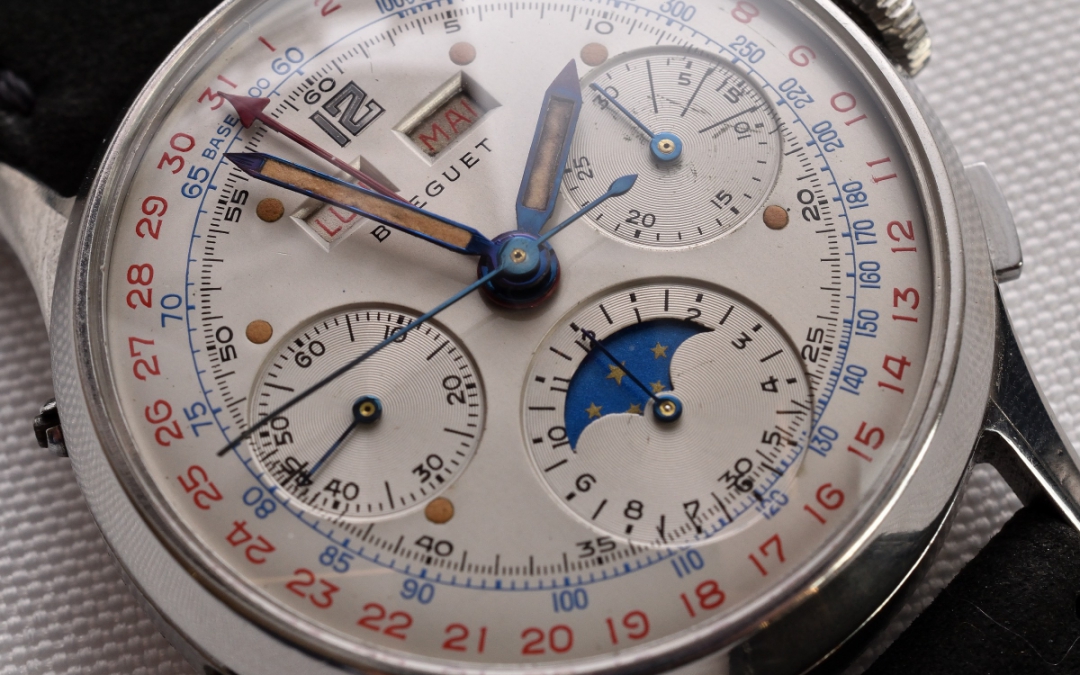 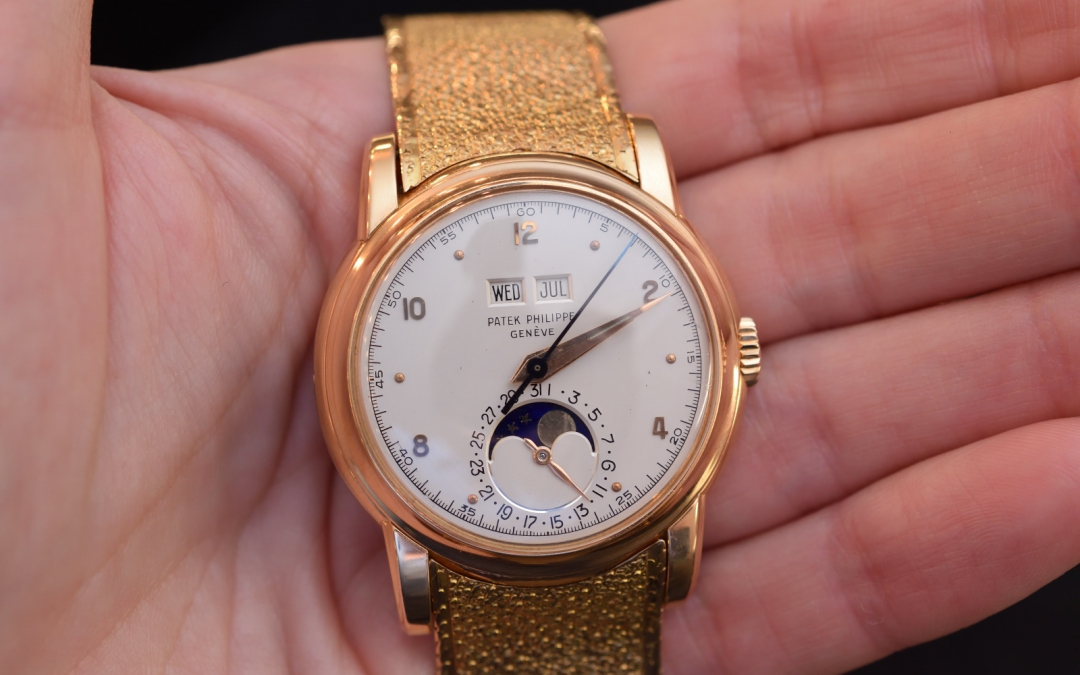 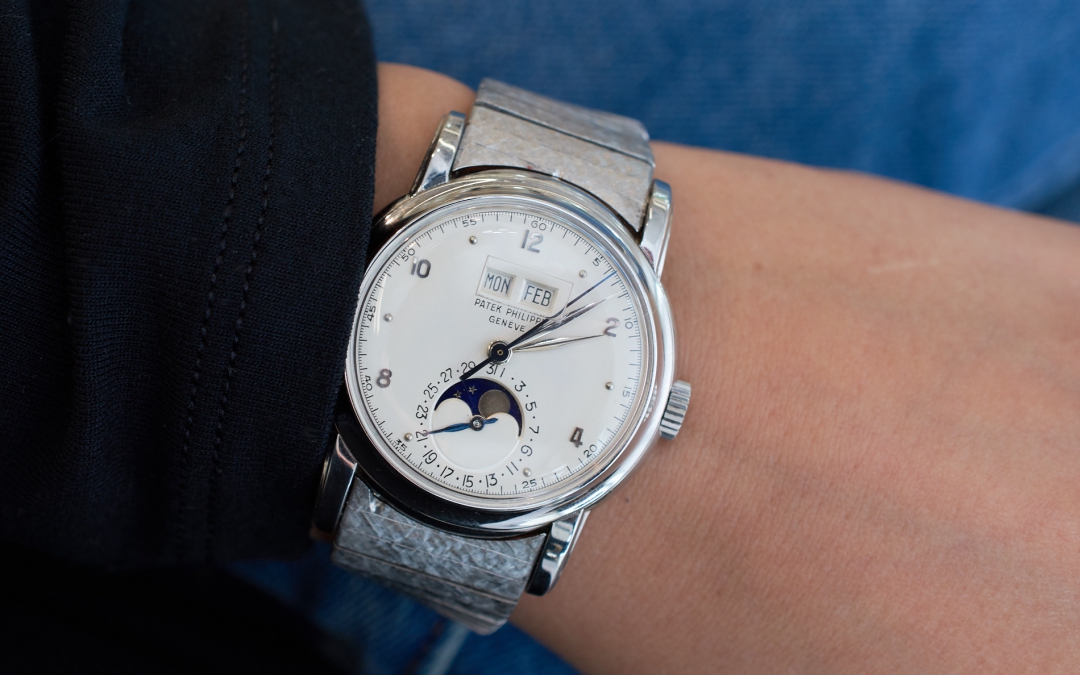