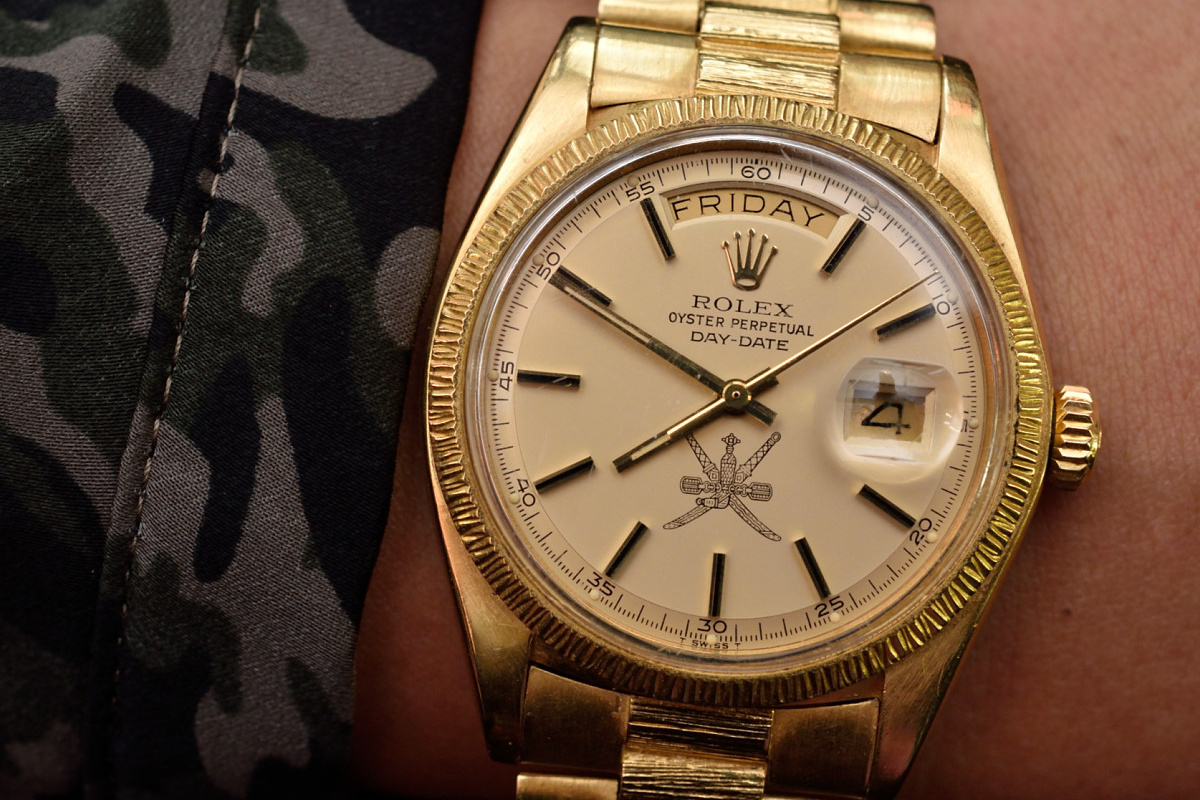 The story of the Phillips Auction dates back to late 18th century. It was founded by Harry Phillips, formerly a senior clerk to James Christie (yes, he was the founder of auction house Christie’s). It was a family business for quite a long time, but in 1999, the company was acquired by Bernard Arnault, the chairman of LVMH, the French luxury giant. In the early 2000s there were some changes in ownership, and Mercury Group (a Russian luxury goods firm) completed the acquisition of the firm in January 2013 and the company reverted back to its original name of Phillips.

In November 2014, Phillips announced the creation of its Watch Department, working in a special and exclusive partnership with Bacs & Russo (SA). Aurel Bacs (internationally recognized auctioneer and watch specialist with more than 20 years of experience) and his partner Livia Russo (she is also a Christie’s veteran and watch expert) specialise in brokering top collectors’ timepieces.

Paul Boutros has joined Phillips as international strategy adviser and head of New York (he is a timepiece strategy consultant to luxury brands and has his own company, the Boutros Group) and the list of well known names associated with the company does not end here…

The first two auctions – held in May, in Geneva – Glamorous Day-Date, was dedicated to Day-Date, Rolex’s most prestigious model and offered 60 of the rarest examples. One hundred percent of the lots sold for a total of CHF 6,179,400. The second sale, The Geneva Watch Auction: ONE, was about the highest quality timepieces with a noteworthy provenance, including a very rare Patek Philippe pink gold perpetual calendar chronograph with pink dial and a Rolex Cosmograph Daytona ‘Albino’ (which was part of Eric Clapton’s personal collection). The auction realised a total of CHF 23,469,963.

He gave us an overview of the upcoming events and highlights at the Peak Suite in Four Seasons Hotel Hong Kong, where the Only Watch timepieces and a great selection of soon-to-be-auctioned timepieces were also exhibited. 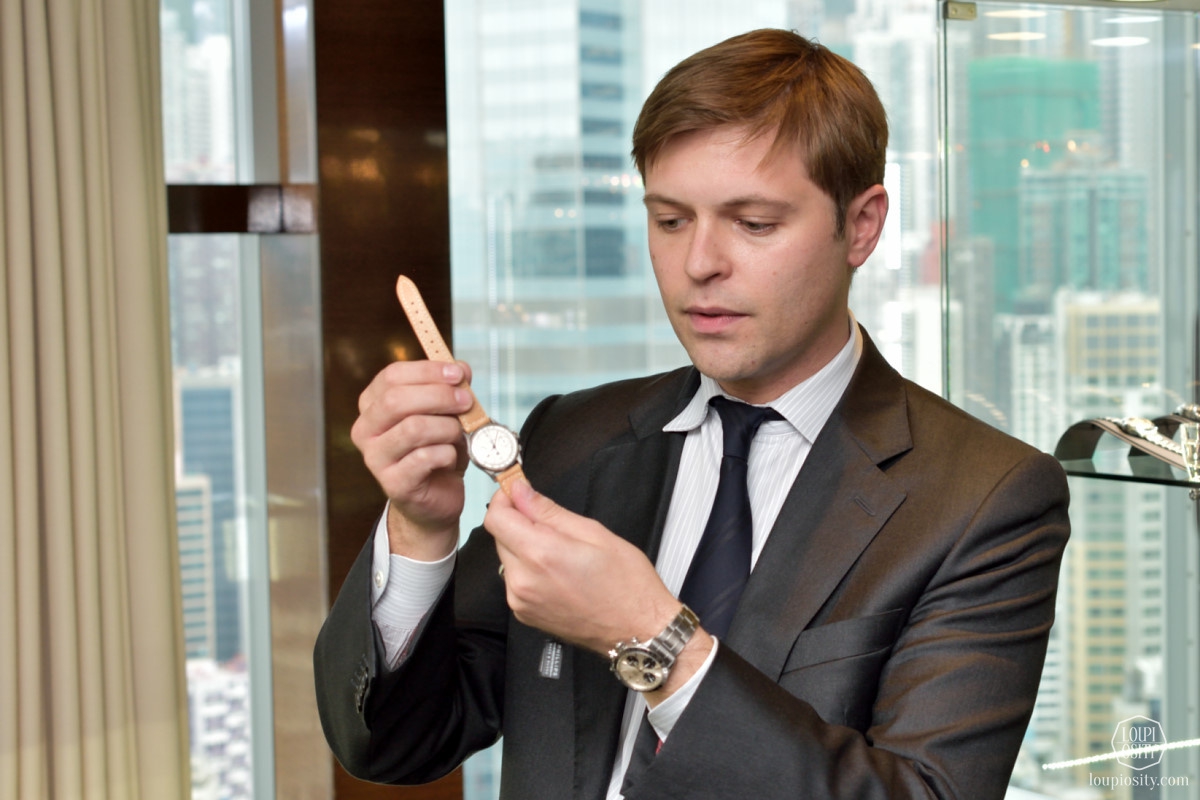 Duchenne muscular dystrophy (DMD) is a genetic disorder characterized by progressive muscle degeneration and weakness. Symptom onset is in early childhood, usually between ages 3 and 5. The disease primarily affects boys. (DMD is a rare muscle disorder but it is one of the most frequent genetic conditions affecting approximately 1 in 3,500 male births worldwide.)
The Association Monégasque contre les Myopathies – created in April 2001 by Luc Pettavino – promotes the scientific research to find treatments.

The goal is to create one-of-a-kind, “collector’s” timepieces and support a good cause. In five editions, Only Watch has enabled the “Association Monégasque contre les Myopathies” to collect more than EUR 15 million and has contributed to significant advances in research over the last 10 years. Before the auction, the collection has been travelling via an international tour: to Monaco, Hong Kong, Beijing, New York and London.

The selection is quite amazing, I advise you to let yourself entertained by Aurel Bacs’ emotional commentary about the highlights.

Collectors can find exciting Rolex timepieces; a gold Rolex Paul Newman Daytona for Hermès (Lot 222), a rare Rolex Steel Triple Calendar Ref. 8171 also known as “Padellone” (Lot 167) or a Rolex Submariner worn by Roger Moore in Live and Let Die (Lot 290), however it is not in working order (it was modified for the movie) but a true piece of movie-history. 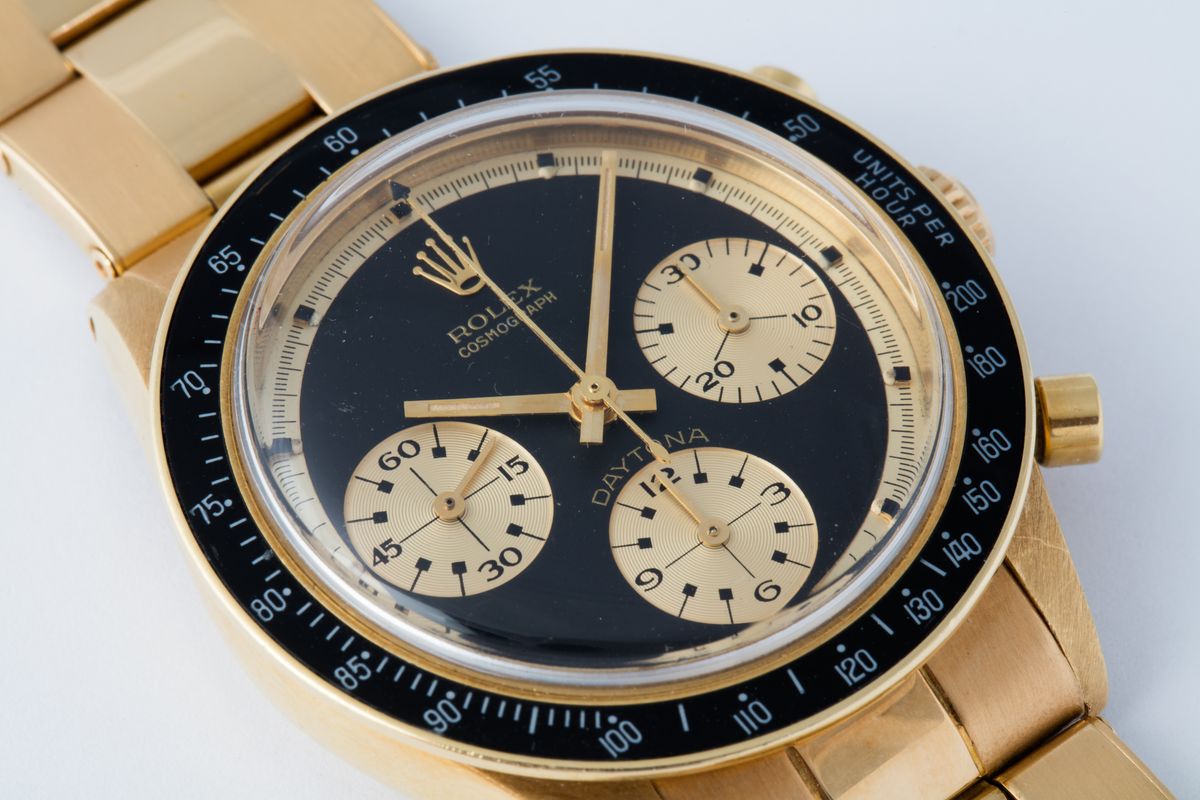 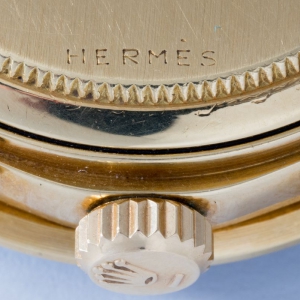 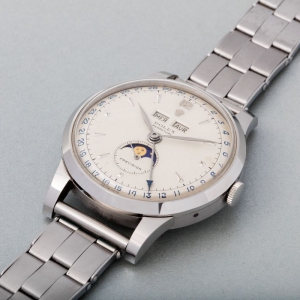 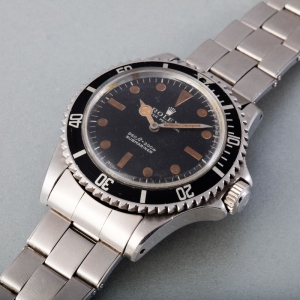 The Rolex “La Caravelle” Enamel Watch Ref. 6102 (Lot 162) with a ship decoration on the dial is also a very special watch. Originally, the caravel is a small, highly maneuverable sailing ship developed in the 15th century by the Portuguese, but on the dial the ship looks more like a Viking vessel. The cloisonné enamel dial was made by Marguerite Koch, a famous artist from Geneva who at the time was also designing and creating dials for Patek Philippe, Vacheron Constantin and Stern Frères. Since the establishment of Stern Frères in 1898, it has become one of the essential suppliers of watch components such as lacquered, precious metal and jewellery dials. Last year a Rolex Cloisonné Dial Watch from 1949 was sold for a record  CHF 1,097,000 so the expectations for this Lot 162 could be really high… 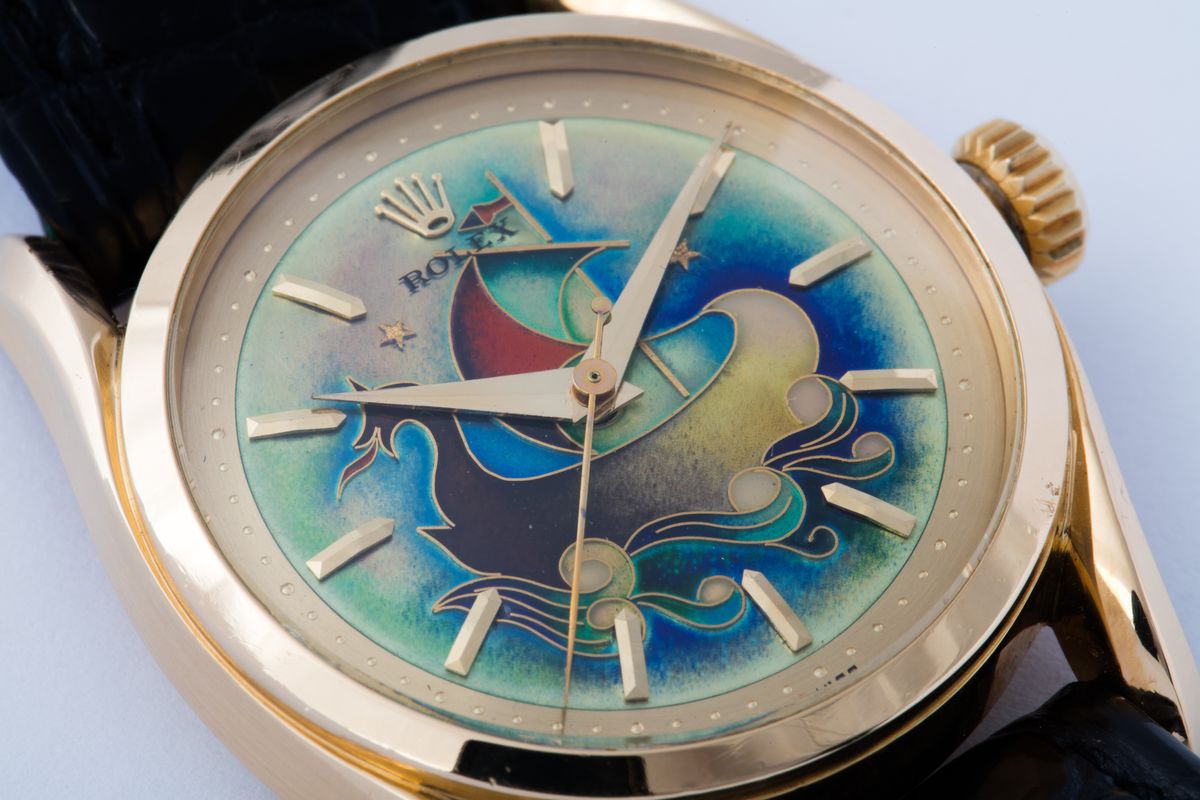 As you might know our site was born in the Middle East, at that time, we were based in Oman. There we use to meet nice watches but also quiet special pieces, like Rolexes with the Omani khanjar on the dial.

Khanjar is a traditional sword shaped like a “J” and it can be made from different materials at the highest evel of craftsmanship. Nowadays it is worn by men for ceremonies or other festive or religious occasions. The national emblem of Oman features the khanjar at the centre.

His Majesty Qaboos bin Said Al Said (the Sultan of Oman) is a respected watch collector and these pieces were made on commissions from him. The timepieces were presented as gifts to loyal servants and foreign dignitaries, with different colored khanjars. There are dials with bright red, luminous green, black or dazzling gold ink printed khanjars. The gold colour signifies an object of utmost importance, used to represent the Sultan himself.

I would say that it is a personal preference that somebody likes the Rolex dial decorated with the Omani coat of arms or not, but it is certainly a very interesting provenance. At the Phillips preview we saw a yellow gold Day-Date wristwatch from 1972 made for the Sultanate of Oman and retailed by Asprey & Co. On this example the khanjar is black. The watch is completed with a President bracelet with bark finished center links lending a slightly rustic yet elegant look to the timepiece. 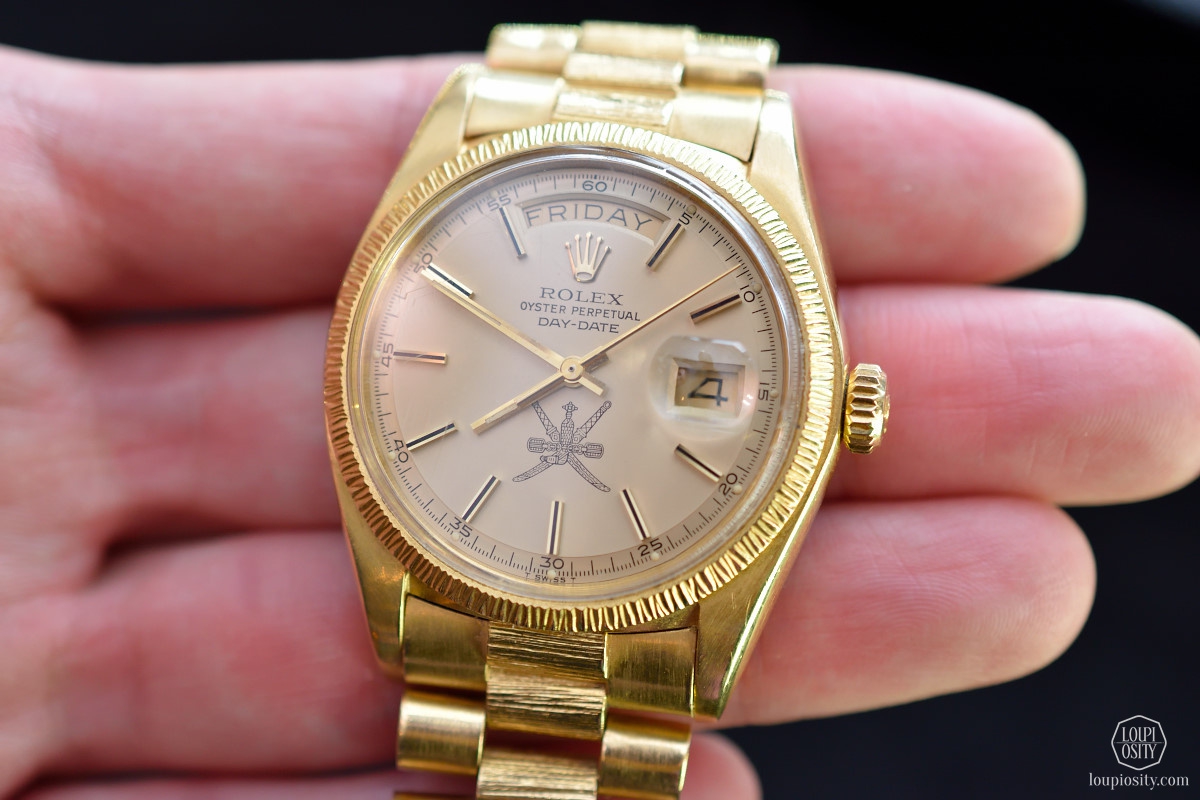 John Goldberger has been collecting and studying vintage watches for over three decades and wrote books for collectors and fine watchmaking fans such as the Omega Watches (2005), Longines Watches (2006), Omega Sportswatches (2007), 100 Superlative Rolex Watches (2008) and Patek Philippe Steel Watches (2011). In his latest book he dedicated four pages to an extremely rare Stainless Steel Split-seconds chronograph with a tachometer scale (Ref. 1436) from 1945. In the 40s only a small quantity of stainless steel cases were made by Patek Philippe and only two known with the reference of 1436. This piece (Lot 169) has a silvered dial, raised steel hour markers and black hard enamel signature and scales. 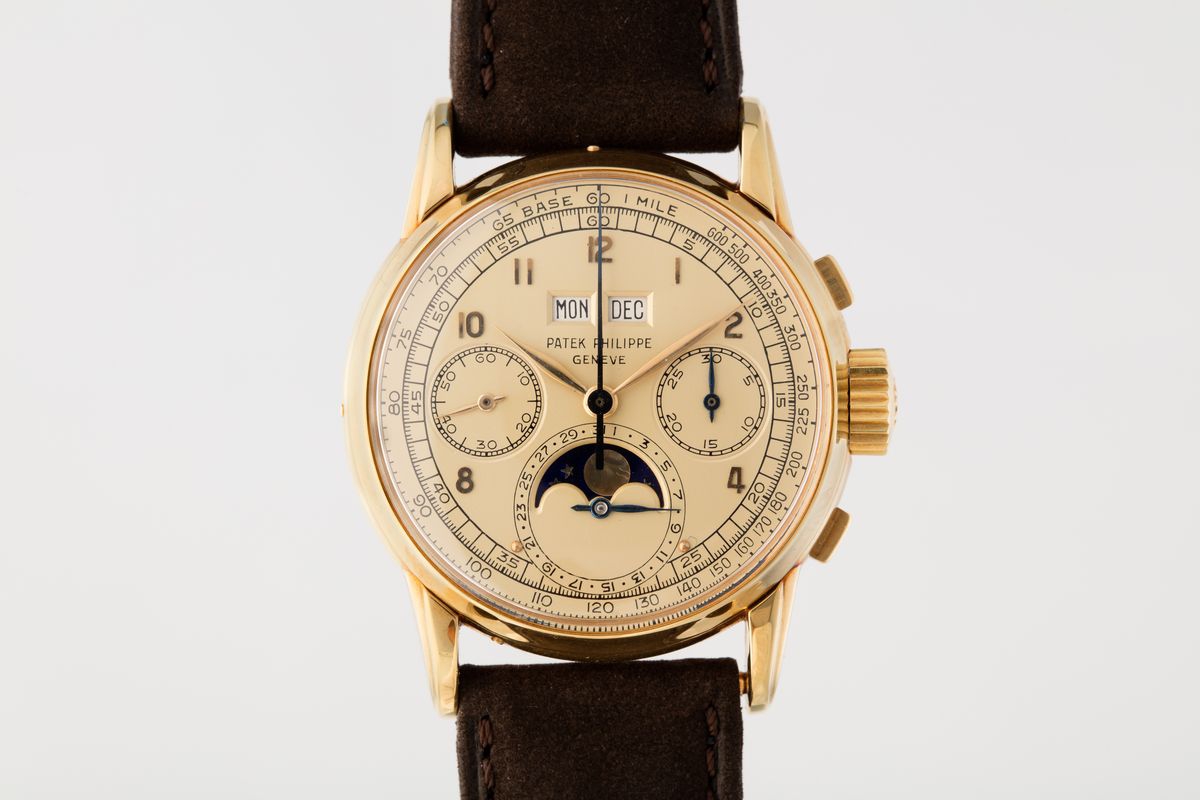 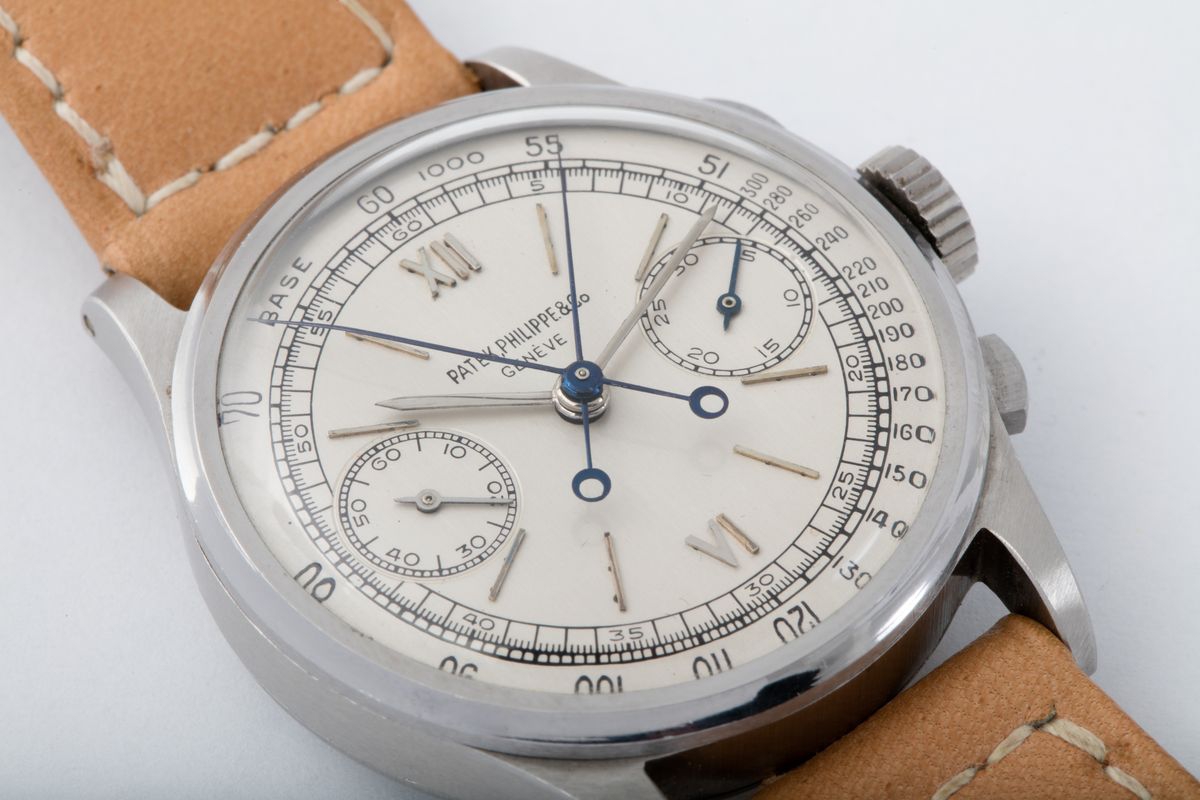 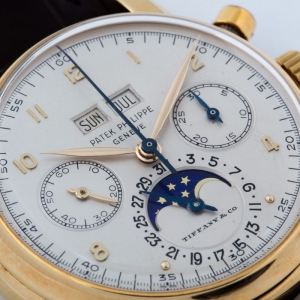 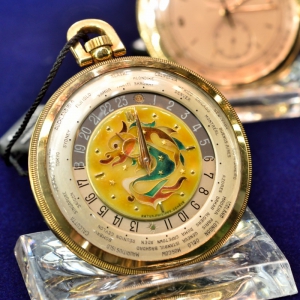 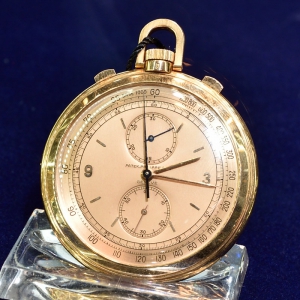 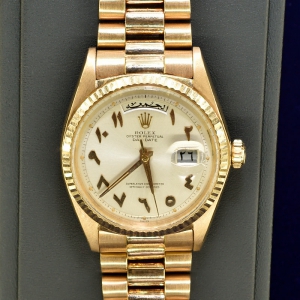 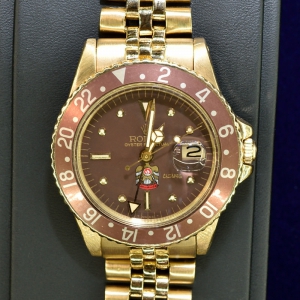 Christie’s Luxury sale in Geneva, November 2022 - Part 1 Christie’s Luxury sale series returns to Geneva this autumn, including highlights from the finest wines, historic vintages and limited edition watches to the rarest diamonds. We selected a few interesting lots from the preview.George Daniels timepieces at the Phillips GWA XVI The late summer Geneva Watch Days gave Phillips Watches an excellent opportunity to showcase some of the world’s finest collectors’ watches to be auctioned this Autumn. The batch includes three fantastic examples by George Daniels.Phillips - The Geneva Sessions Besides the brands, the watch department at Phillips auction house also showcased some of the world's finest collectors' watches at the Geneva Watch Days.