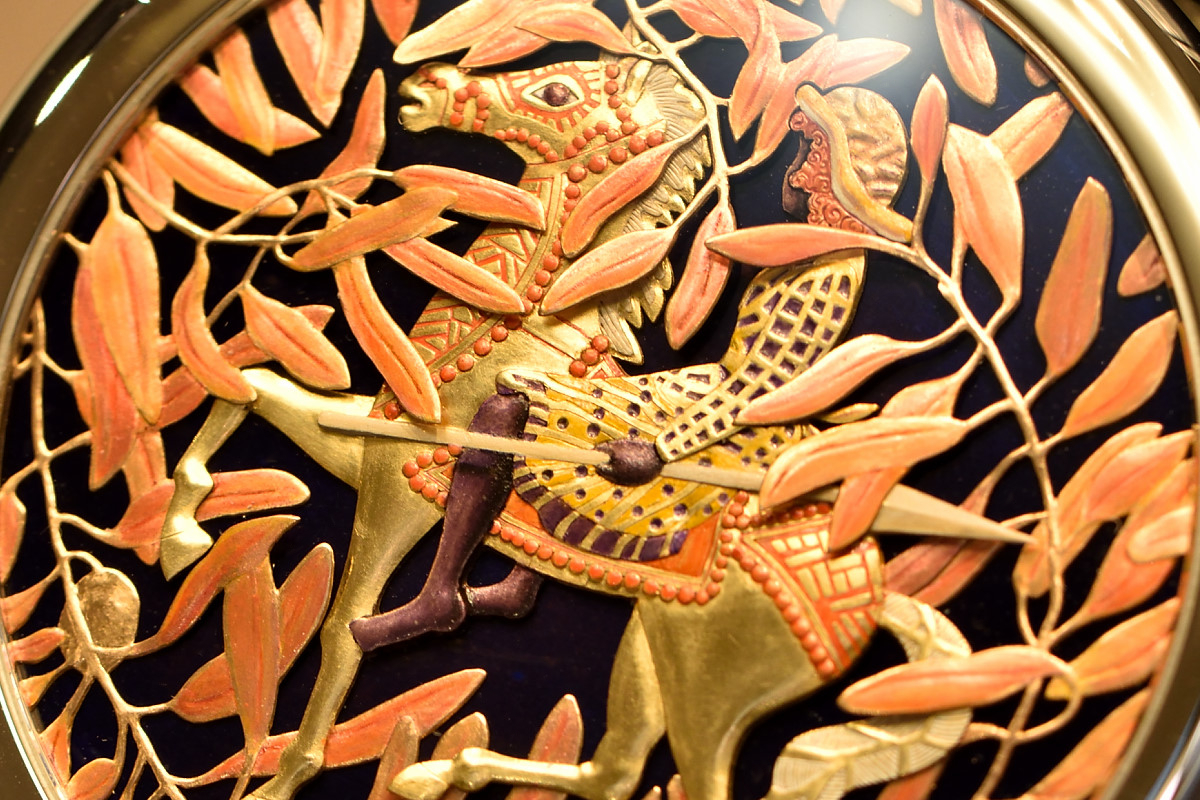 Earlier this year, Hermès organised an exhibition in Bruce Museum, Greenwich, entitled “Fierce and Fragile”. It commemorated the work of Robert Dallet and celebrated the beauty and allure of big cats.

Born in 1923, Robert Dallet grew up on a farm in north-western France. Already as a child he was passionate about nature and drawing animals. He dedicated a lot of time to studying and observing animals. Robert worked for different nature magazines and created numerous books for children with the publishing house Lito in Paris. He participated in numerous projects with the WWF to create posters and images. At the end of the eighties, after meeting Jean-Louis Dumas, then President of Hermès, his first scarf for Hermès, Kenya, was created. Later he made twenty-five scarves for Hermès, including the iconic Jungle love in 2000, Tendresse féline and Les Tigreaux, both in 2012. There is also jewellery and other objects decorated with his drawings. Figures that appear on the 2016 timepiece collection of Hermès are from Dallet’s last book Les Félins written in 1992 and published by Nathan.

A technique, never applied on watches before was utilized. Enameller and engraver Olivier Vaucher developed the method, inspired by lithophany, a special porcelain or ceramic decoration technique popular around the 1820-30s in Europe. They were created by negative-carving an image in a backlit warm wax, then a plaster mould was cast. Where it was deeply carved, the porcelain let light more through, while thicker parts became darker. The porcelain lit from the back gave a three dimensional image especially in varying light.

Mr. Vaucher’s method is called the Émail Ombrant (shaded enamel), and it uses light to reveal a raised depiction of a tiger. First, patterns or figures are engraved on a white gold plate and then slightly tinted translucent enamel is applied. The difference in the engraving depth makes parts darker and others lighter in colour. After firing, the result is a gorgeous lively tiger face in many shades of grey. 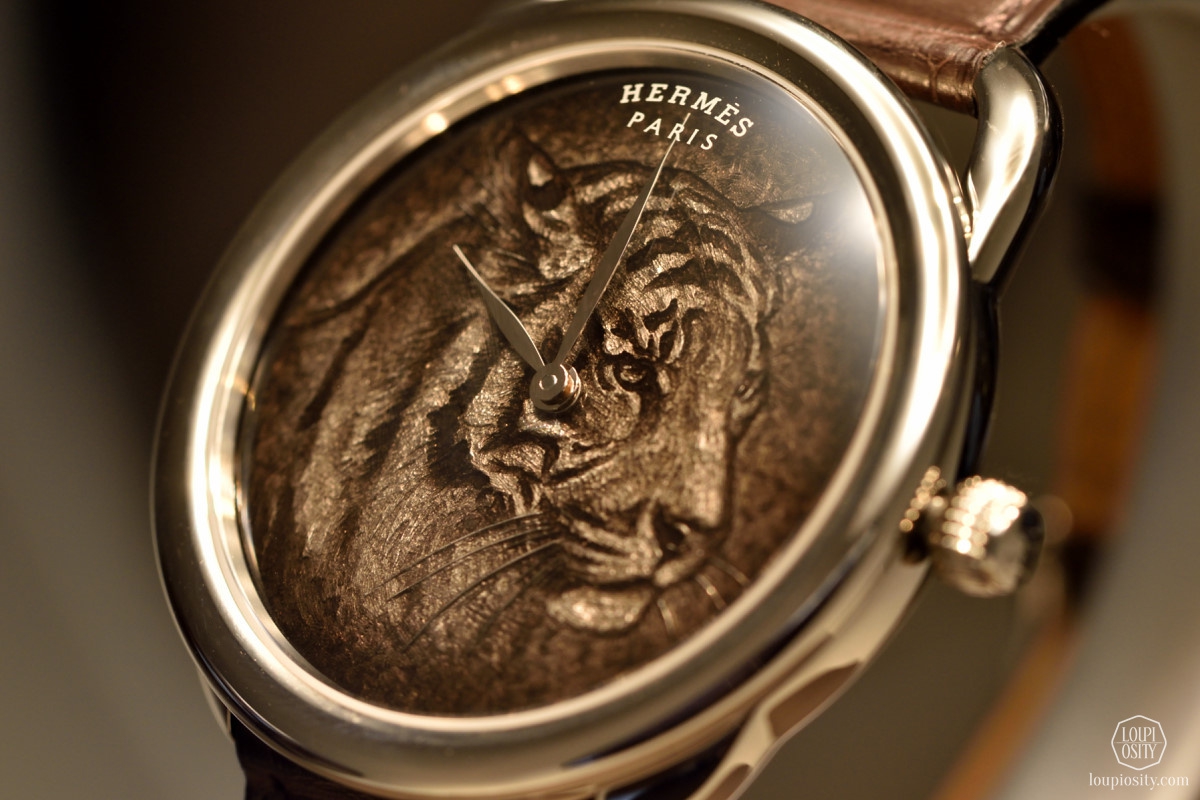 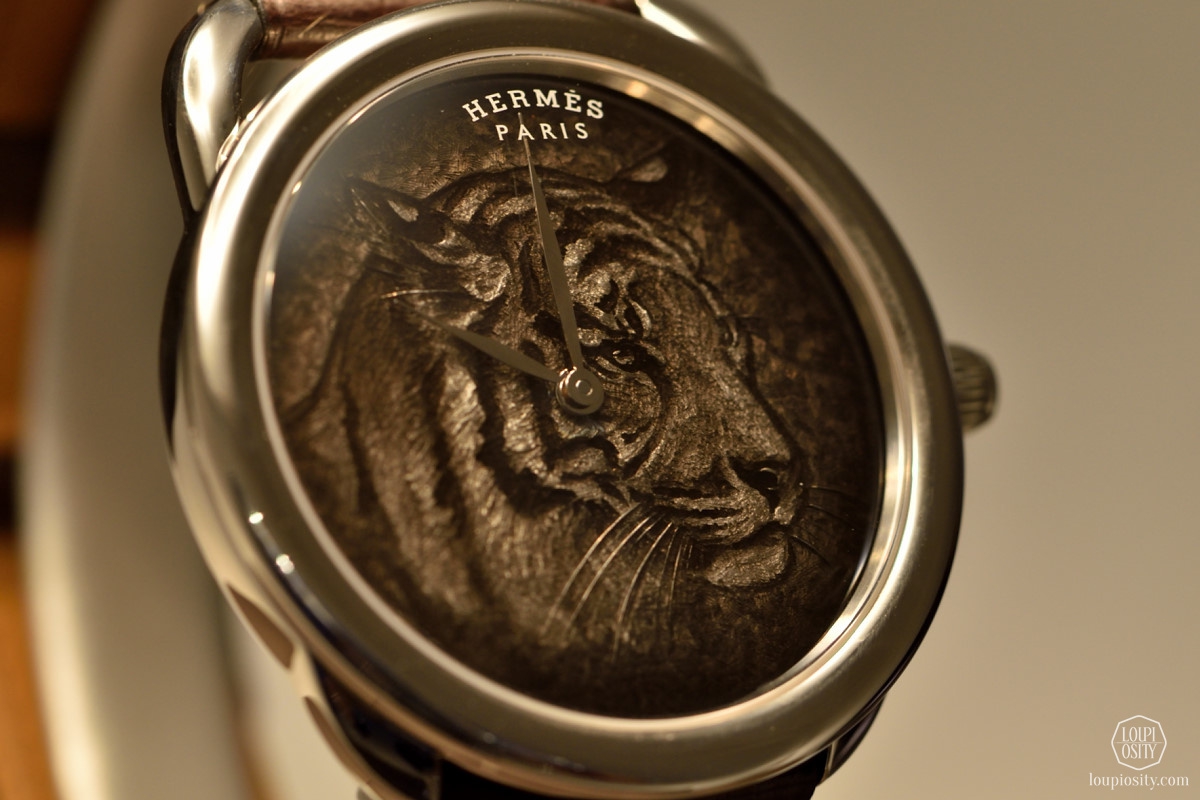 The Slim d’Hermès line received great attention last year thanks to the watch design, made by Philippe Delhotal, Creative Director of La Montre Hermès and the great typography by Philippe Apeloig.

The 100 new, limited-edition pieces came with a dial made out of white enamel. The qualities of the enamel stand the test of time, thus it conserves the beauty of the dial. You might think that a simple, white dial is not a big deal, however it requires extreme precision, patience and great knowledge to create. The enameller coats a very thin copper disc with a highly inflammable material. Then the very fine powder of enamel (which is silica together with a colorant, e.g: a metal oxide) is applied. Firing is done at 800 – 1200 °C – different colours require different temperatures. The artisan has to be really careful; at any step during the process the material may crack or air bubbles, tiny particles or even a speck of dust may destroy the surface. Several firings are required to achieve the spotless result: a beautiful white and shiny enamel dial. 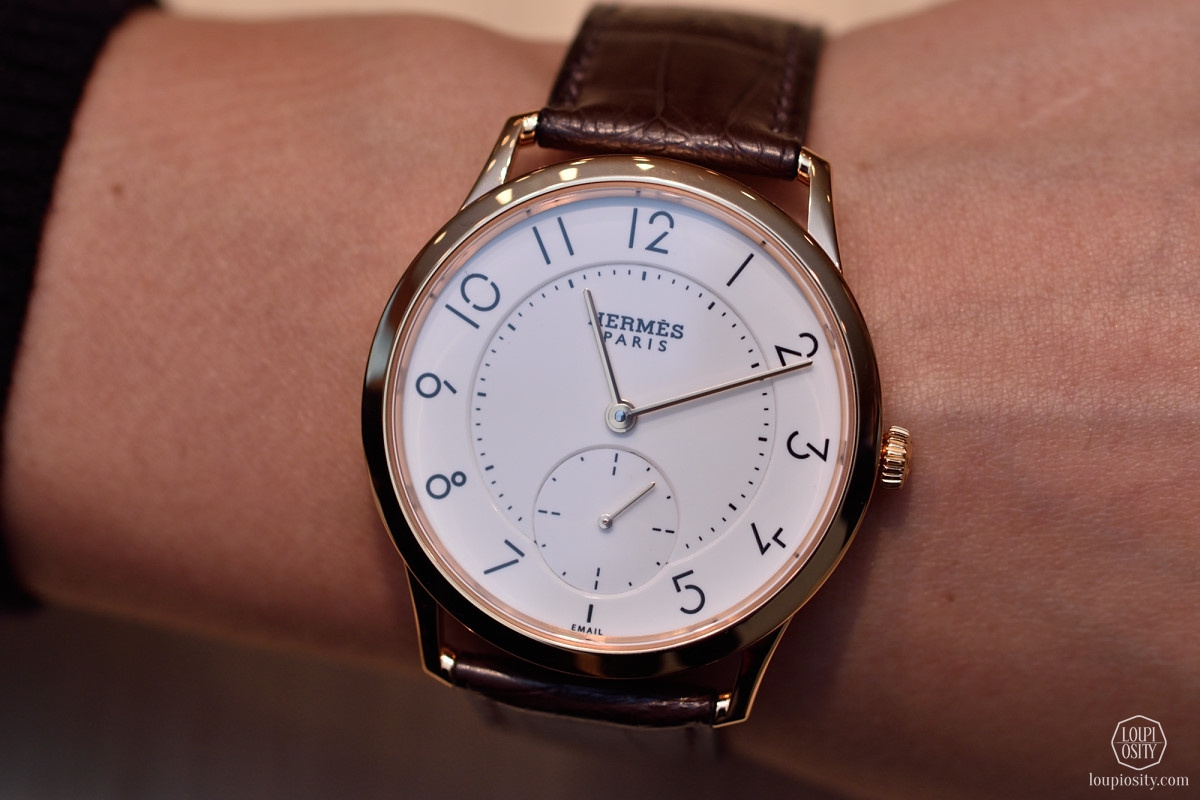 Hermès – as an icon of leather goods – is fond of combining leatherworks with fine watchmaking. This year the Maison presented the “leather cuff-style” Faubourg Manchette Joaillerie, the Pocket plein cuir, a pocket watch created with two saddle-making techniques, and the one-of-a-kind Pocket Panthère with a strap and pouch in matt Havana alligator.

Academus or Hecademus, was a Greek mythological hero. According to some myths he left a big park (a mile north west of the centre of the city of Athens) to the citizens to use for gymnastics. Plato – who was a great philosopher in Classical Greece – started to teach there in around 387 BC. Many intellectuals were schooled in the Academy, the most prominent one being Aristotle. This garden was visualised on the scarves.

The three pieces are decorated with different techniques: enamelling, enamel painting, engraving and fine hammering. The brown-toned version depicts a horse surrounded by leaves and branches. It was created using the Grand Feu enamel miniature painting technique and to achieve the different shades and nuances more than 20 firings in the kiln were necessary.

On the second cover we find a horse with a horseman galloping through bushes. Each pattern is individually positioned by hand and painted in a way that the overall result is slightly three-dimensional.
The third motif – 4 horses and leaves – are made by various engraving and hammering methods on white and rose gold. 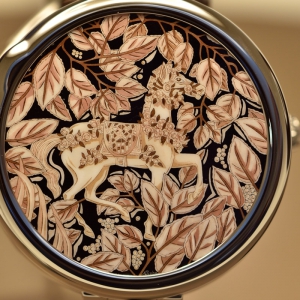 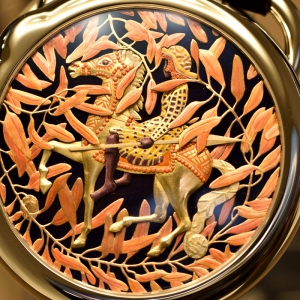 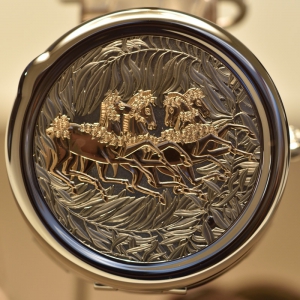 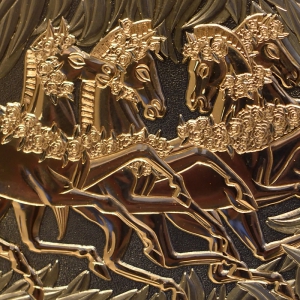 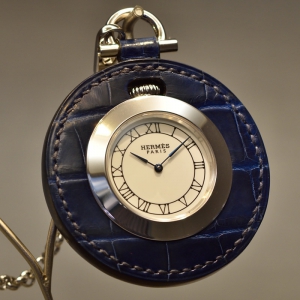 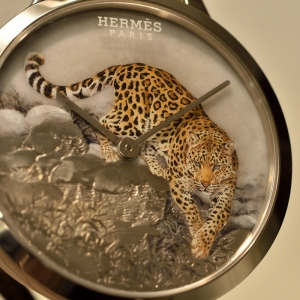 Betty Catroux, Yves Saint Laurent - Feminine Singular This March the Musée Yves Saint Laurent Paris devotes a special exhibition to Betty Catroux, fashion icon and Yves Saint Laurent’s ‘female double.’ The pieces displayed at the exhibition come from a major donation Betty Catroux has made to the Fondation Pierre Bergé.Greubel Forsey at Dubai Watch Week 2021 Greubel Forsey recently revealed their latest project the ‘Renaissance d'une Montre’ which will be instituted in 2023 and which is destined to provide some of their timepieces with a second life. Beside the introduction of this project the manufacture brought a new timepiece to the Dubai Watch Week - the Balancier S2'Details: Genealogies of Ornament' - Homo Faber 2022 The ‘Details: Genealogies of Ornament’ is set in the Nautical School area at Fondazione Giorgio Cini. It is one of 15 exhibitions that comprise the Homo Faber Event 2022, organised by the Michelangelo Foundation.