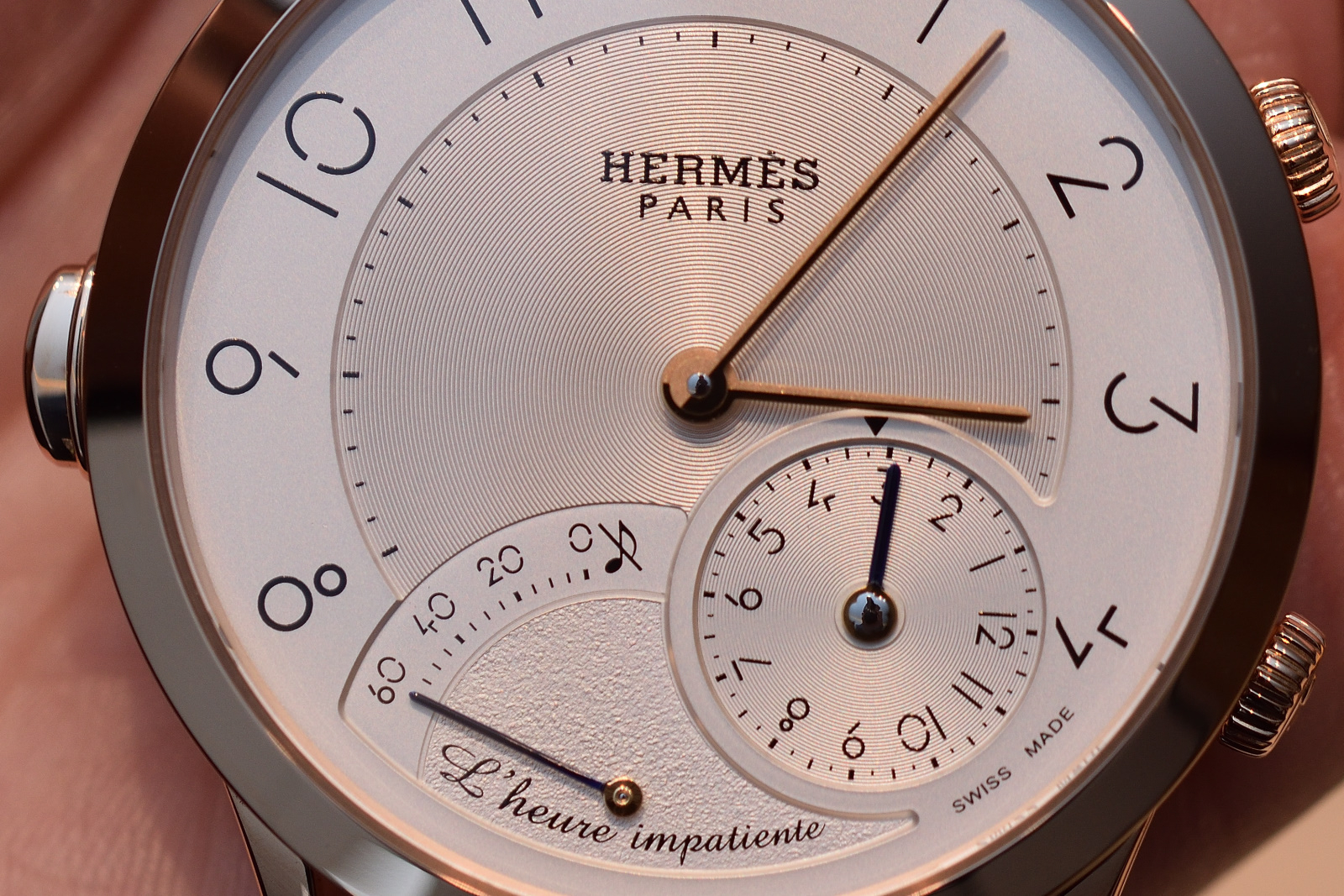 In the lounge of Hermès at Baselworld, waiting for our presentation to start I was wondering how this company has stayed young throughout its 180 years of uninterrupted life.

I guess the secret is that Hermès has not taken itself too seriously and managed to communicate with people using a playful tone. They are able to convey happiness with its “forever young” mind-set and present quality in a cheeky yet elegant manner – just look at the interactive shows or the videos they shot, let it be about scarves, ties or bags.

Creativity is free to soar at the company – the only restriction is maintaining the standards of the coherent brand image. It is a common practice there that, people participate in designing activities totally outside of their professional areas.

Fun is never at the expense of quality. In terms of timepieces, Hermès has been working with the top craftspeople in the industry. Hermès owns enamelling facilities as well as shares in the mechanical movement manufacture Vaucher Manufacture Fleurier, which is able to supply complete calibres in small quantities (we visited it, click here). They have also designed award-winning timepieces with Jean-Marc Wiederrecht and his company Agenhor.

Thoughts over, we have novelties to see!

Hermès created the first “Poetic Complication” with Mr. Wiederrecht in 2011 with the intention to develop unconventional complications that make one smile instead of being seriously informative. Therefore, by a push of a button, the Hermès Arceau Le Temps Suspendu can send the hands into a V shaped parking position at 12 o’clock and “suspend” the display of time. The movement continues to run, of course, and by another push, the hands fly back to the appropriate index. The watch won in the best Men’s watch category at the Grand Prix d’Horlogerie de Genève the same year. In 2013, an updated version came out with an in-house base movement (previously it was an ETA base) and the Agenhor “time suspension” module. It also featured a seconds sub-dial with backwards running hand on a 24 unit scale.

This year, Hermès presented a newcomer in the playful collection.

The joy of anticipation can be just as sweet and even more exciting than the awaited moment itself. The new Slim d’Hermès L’heure Impatiente bends time and makes the heart beat faster by building on these emotions. In the sub-dial at 4 o’clock, the wearer can set the time of an event coming up in the next 12 hours. As time passes, the hand always inches one step closer to the 1. When the tension is at its highest, the small retrograde hand starts to count down the last 60 minutes. A charming gong is sounded upon reaching the 0.

The Manufacture Hermès H1912 movement is a mere 3.7 mm, on top of which the custom-made Agenhor module is 2.2mm. The development took about 5 years.

The complexity of the mechanism is hidden within the slim case, which is rose gold with an opaline silvered dial. The beautiful number typography is by the French graphic designer Philippe Apeloig (see more about his collaboration with Hermès here). The Slim d’Hermès L’heure Impatiente has a great personality. 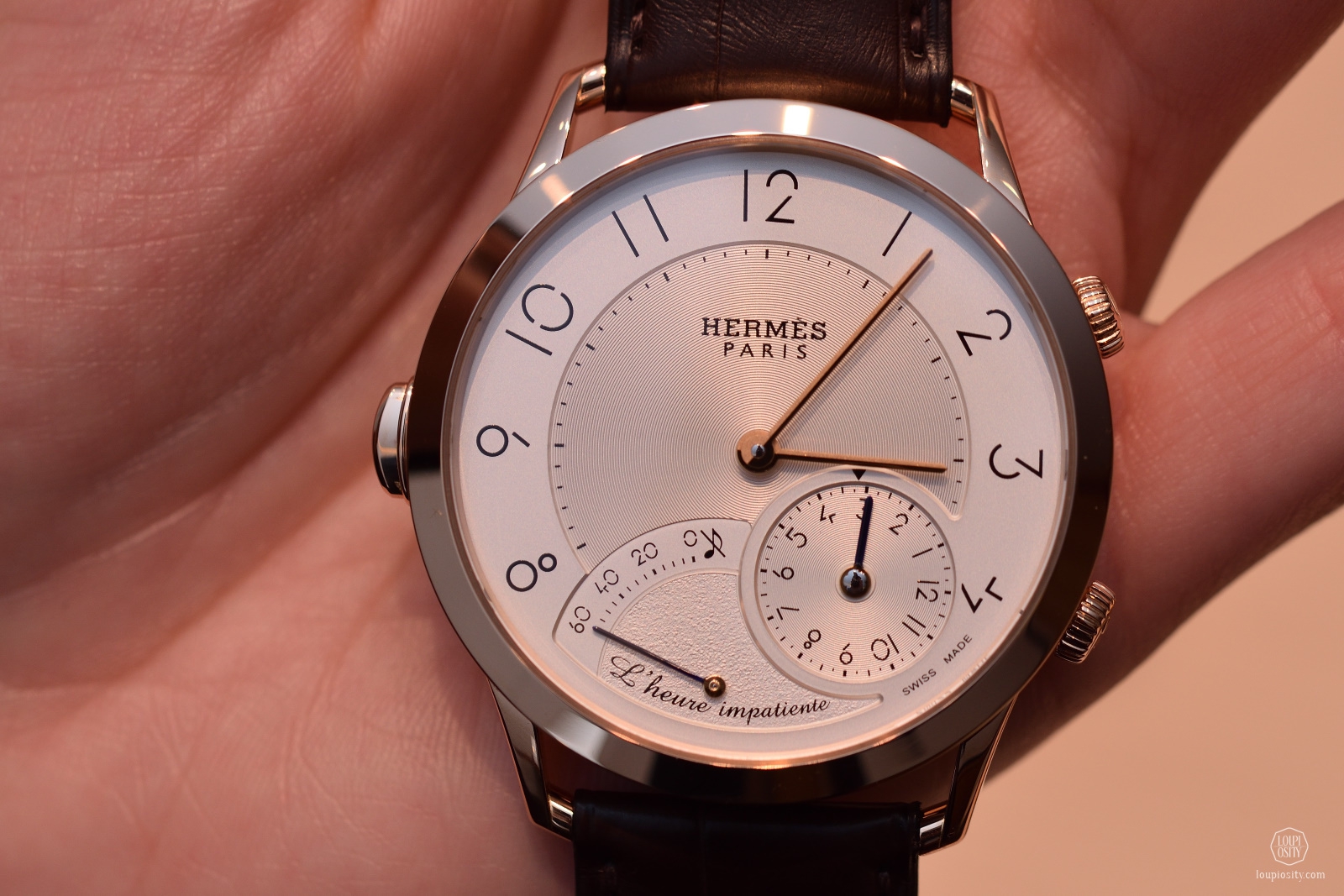 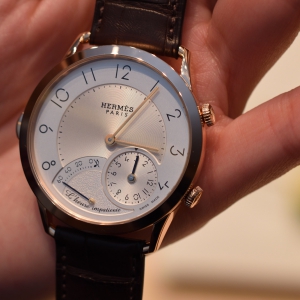 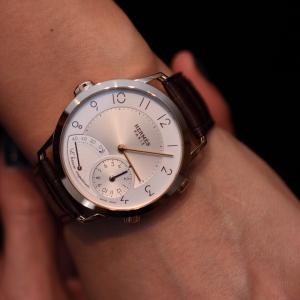 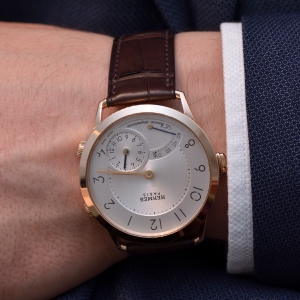 The history of Hermès is surrounded by icons and emblematic pieces – the colourful and gorgeous Hermès silk scarves, the bags including the Birkin (named after actress and singer Jane Birkin), or the Kelly bag (originally the Sac à dépêches bag, but renamed after the American actress and Monegasque princess Grace Kelly) are timeless classics. A bit younger but also a signature is the Cape Cod watch, which celebrated its 25th anniversary last year.

Outstanding creations need outstanding people behind them. Henri d’Origny has worked with the company since 1958 – first as designer, later as artistic director and creative partner. He imagines many objects, like silk scarves (“Cavalcadour”, “Mors et Gourmettes” or “Grand Manège”), watches (the Arceau or the Clipper) or the “Chaine d’ancre” (or anchor chain) which appeared on porcelain and jewellery.

He also created the Cape Cod watch design in 1991, representing a “square inside a rectangle”. The lugs are inspired by the mentioned “anchor chain” motif, giving a dash of nautical flavour to the timepiece in an evergreen and effortless style. It has seen many models, varying sizes, cases like the Cape Cod Tonneau, different decorations such as the Cape Cod Zebra Pegasus as well as quartz and automatic movements. A slender version, called Nantucket, was also introduced.

Martin Margiela made the timepiece even more desirable – he added a chic Double Tour strap to the Cape Cod watches and put the timepiece on Hermès’ runway in Paris.

Martin Margiela, the Belgian fashion designer was the artistic director for the women’s ready-to-wear collections of Hermès from 1997 until 2003. Margiela graduated from the Royal Academy of Fine Arts in Antwerp and he is considered an honorary member of the ‘Antwerp Six’, the ground-breaking group of designers. His appointment at Hermès was rather unexpected due to his provocative style. Now you can discover his creations in more detail in my beloved Antwerp at the cool ModeMuseum in the heart of the Antwerp’s fashion district. 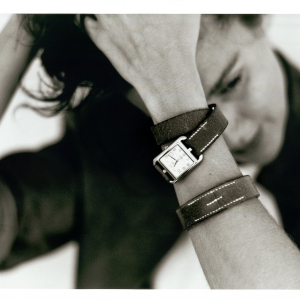 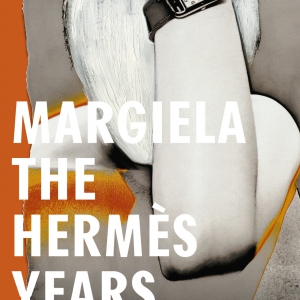 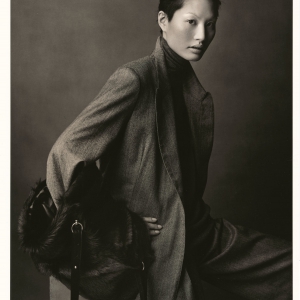 The Cape Cod Shadow is rather surprising – the black DLC-treated case and the matt black dial are not the most typical for Hermès. Still, the shape of the watch and the straps are already so recognizable that the black version seems to be a natural addition to the family. I love its edgy look, but if for any reason you feel a need to soften it with a different strap, the black Barenia calfskin wrap-around strap with red-burnished sides is interchangeable. 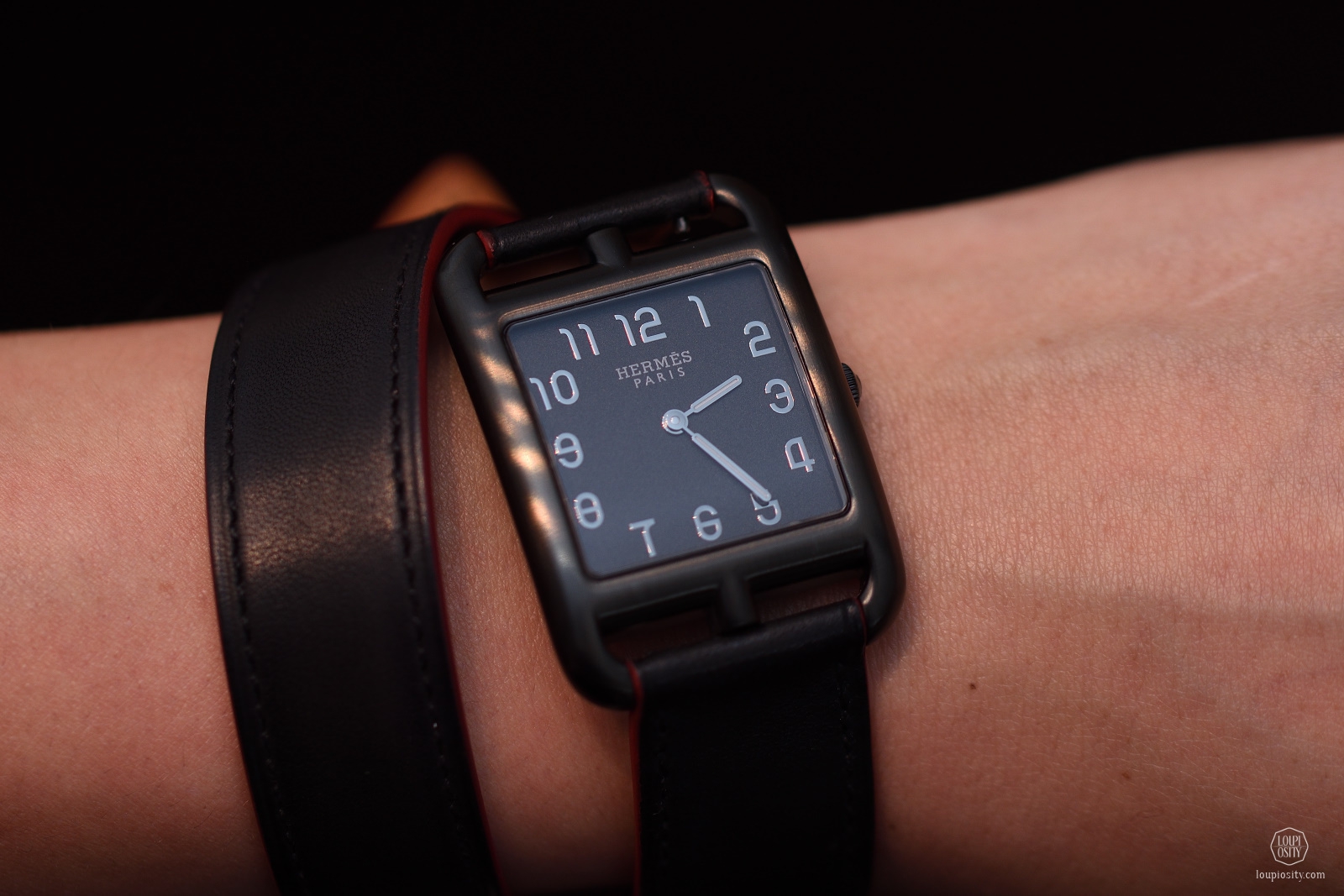 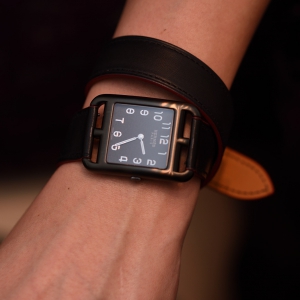 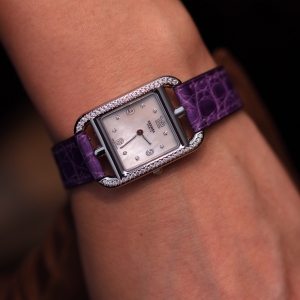 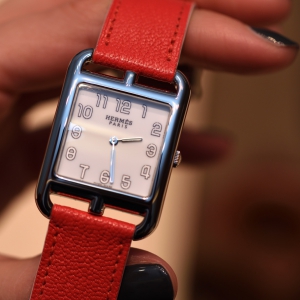 A bear that originally appeared on a scarf design in the Autumn/Winter 2016 collection (called GRRRR! by the British artist, Alice Shirley) made its way to the dial in the form of enamel artwork. Alice Shirley has collaborated with Hermès since 2012 on silk scarves, enamel jewellery and other accessories.

The 39.5mm white gold watch offered the right canvas for the gruff bear, enamelled using the miniature painting technique. Each colour pigment is applied on the white dial with top precision. The finished painting is protected by a translucent enamel. 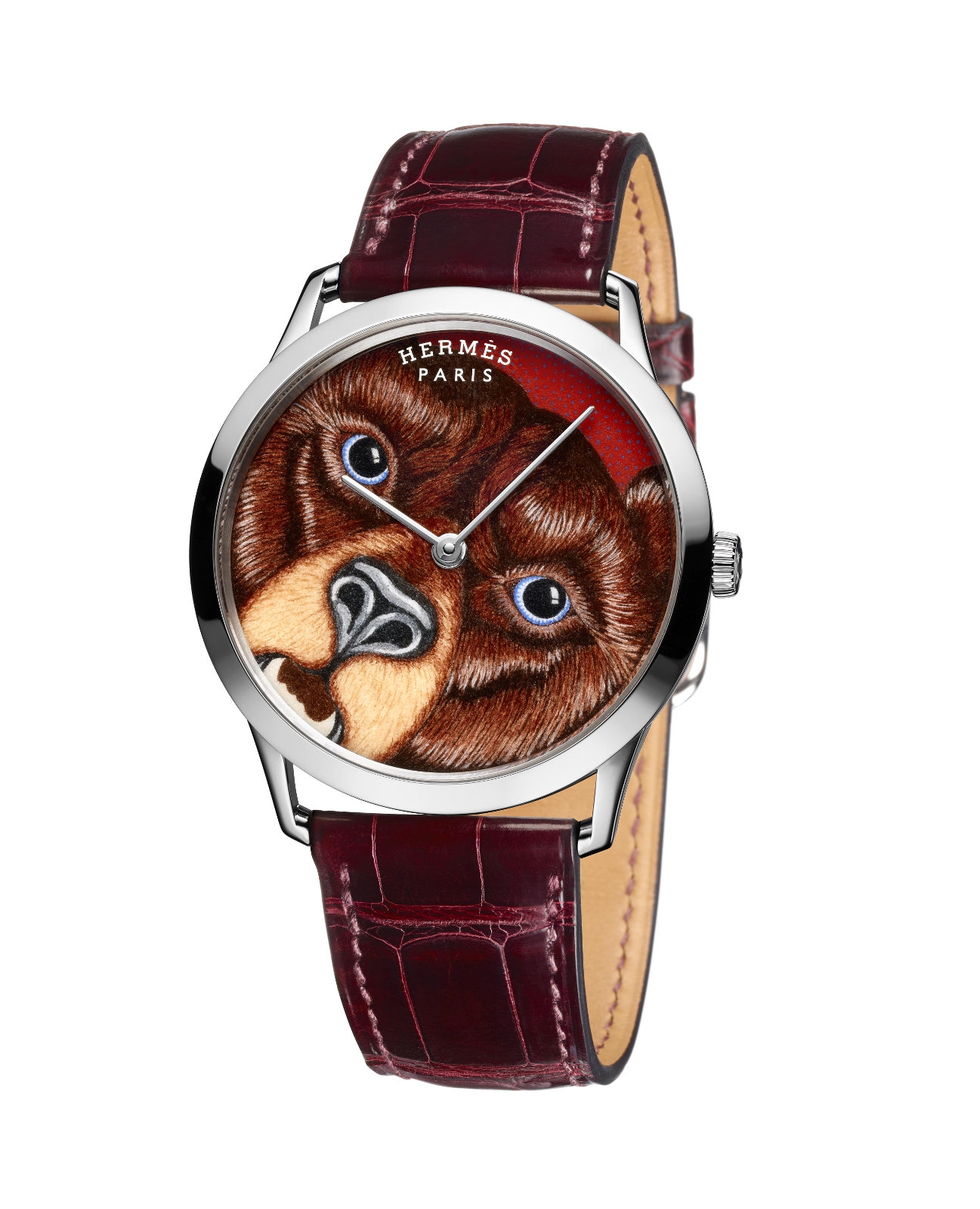 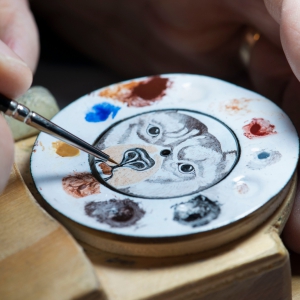 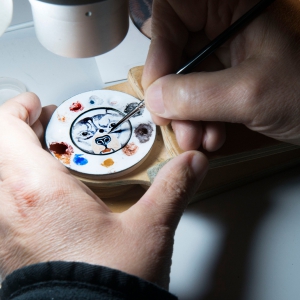 'Details: Genealogies of Ornament' - Homo Faber 2022 The ‘Details: Genealogies of Ornament’ is set in the Nautical School area at Fondazione Giorgio Cini. It is one of 15 exhibitions that comprise the Homo Faber Event 2022, organised by the Michelangelo Foundation. Geneva Watch Week A great amount of finewatchmaking brands will present their latest novelties to press, retailers and to the public in Geneva From 30 March until 5 April with the hybrid concept - online launches will be dedicated for those who are not able to travel to Switzerland this spring.New views An overview about a few upcoming finewatchmaking events - hopefully all in real life - follow us along.