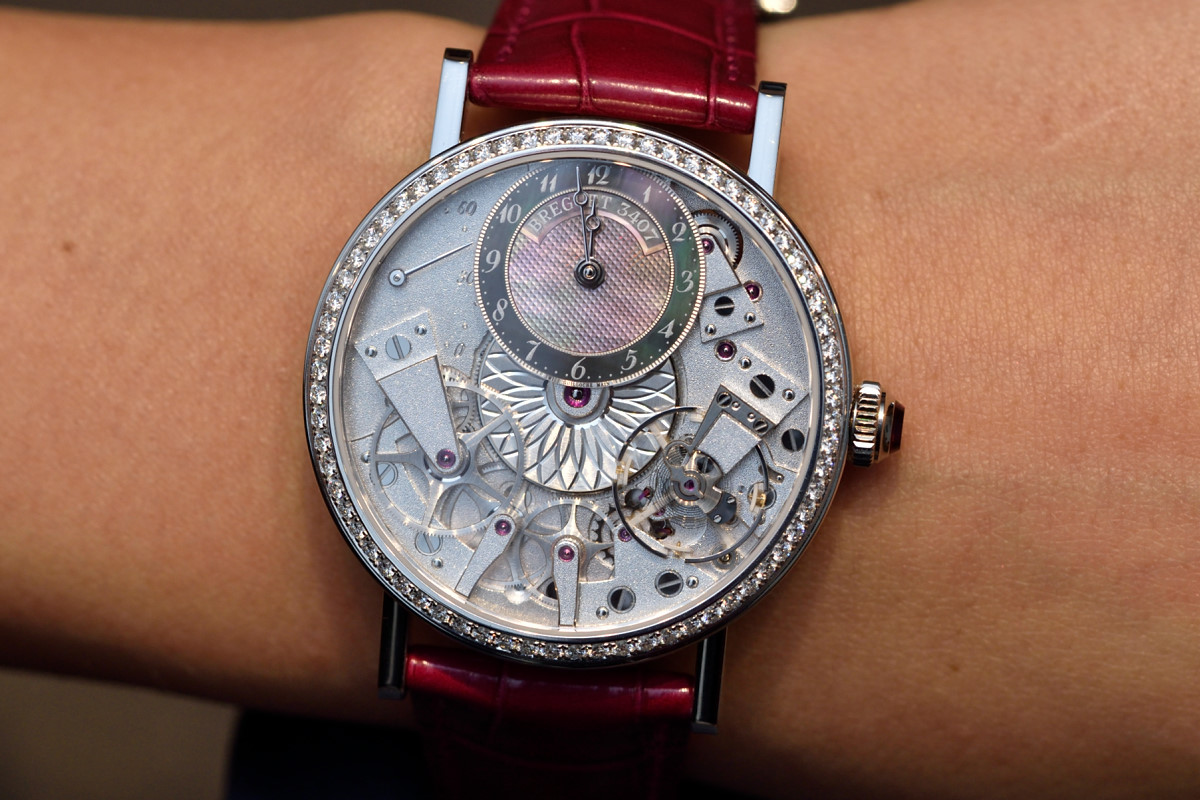 Breguet is the one of the oldest watchmaking firms, which has produced timepieces regarded top class at all times. Good luck visited Abraham Louis Breguet in the shape of some powerful women of his age, who made a considerable contribution to the rise of his fame. Marie-Antoinette was marvelled by Breguet’s perpetuelle (self-winding) watch and introduced him to King Louis XVI of France – a relationship which resulted in many commissions. Joséphine de Beauharnais, who married Bonaparte Napoleon in 1796 became his client at the height of Napoleon’s power. Caroline Bonaparte, the Queen of Naples, received the first wristwatch from Breguet, created in 1810.

Everything that leaves the workshops of Breguet today is equally breathtaking – daring technically and refined aesthetically. The company designs dedicated fine-mechanical pieces for ladies and given the slender lines of the reserved classical men’s models, they look special on women, too. Taste and intelligence emanate from the novelties introduced at Baselworld 2016 and we decided to dedicate a chapter to these in our series.

These past relationships and former masterworks are still a great inspiration to the Manufacture. This year Breguet presented a model dedicated to Joséphine.

Joséphine de Beauharnais (1763-1814) had a very diverse life also interspersed with affairs with several leading political figures. She was the first wife of Napoléon Bonaparte, he was her second husband. She was also known for her lavish lifestyle (with expensive hobbies, for example she maintained an amazing collection of roses by hiring landscapers and horticulturalists) and she was praised for being an engaging hostess. The Bonaparte family was a loyal fan of Breguet’s watches.

The Perles Impériales watch has two versions. The one pictured here is the white gold model with a purple satin strap. The white mother-of-pearl dial has fine engine-turned motif on its surface. The typical oval egg shaped case is decorated with 23 brilliant-cut diamonds (approx. 4.12 ct) and set with a quite big Akoya pearl at 6 o’clock. The white gold V shaped lines on the side make the case look like a crown. 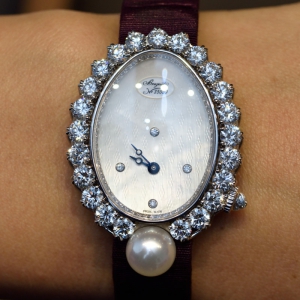 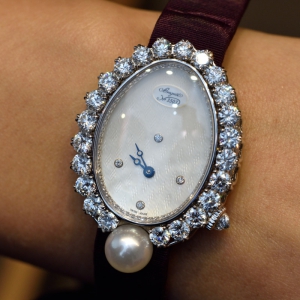 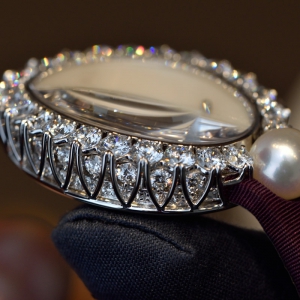 The royal style is completed with a high jewellery set: a pair of earrings with approximately 3.28 carats of diamonds and the Perles Impériales ring set with cca 1.88 carats of it. Yet, the central motif remains the three beautiful white pearls. 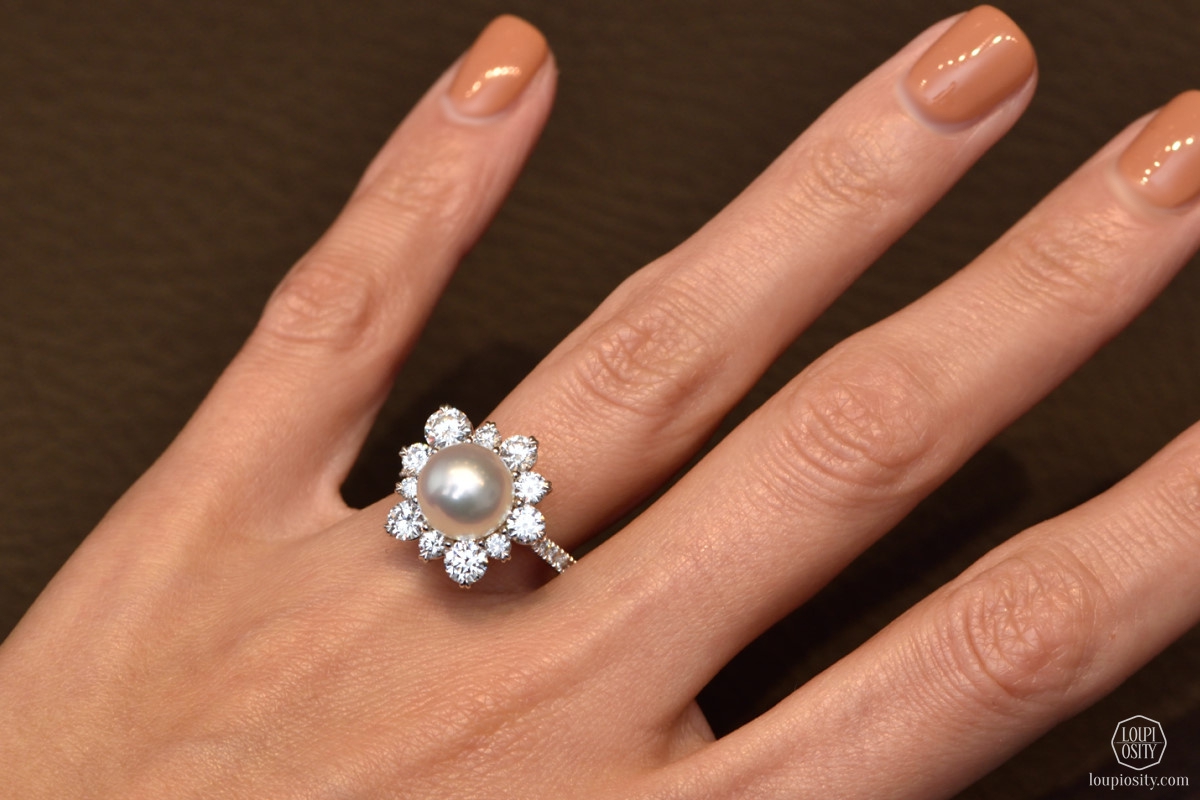 “Reine de Naples”, inspired by the aforementioned 1810 bracelet watch for Bonaparte’s sister Caroline, Queen of Naples, has been a very successful collection of the brand since 2002. In 2015 a smaller-sized model called Princesse Mini, was introduced with the dimensions of 32.7 x 27.3mm. The new edition has a lavender-coloured mother-of-pearl dial with a large XII made of marquetry. To frame the feminine dial, brilliant cut diamonds sit on the circumference in the white gold case. Calibre 586/1, a self-winding movement of the house is placed in this bejewelled shell. 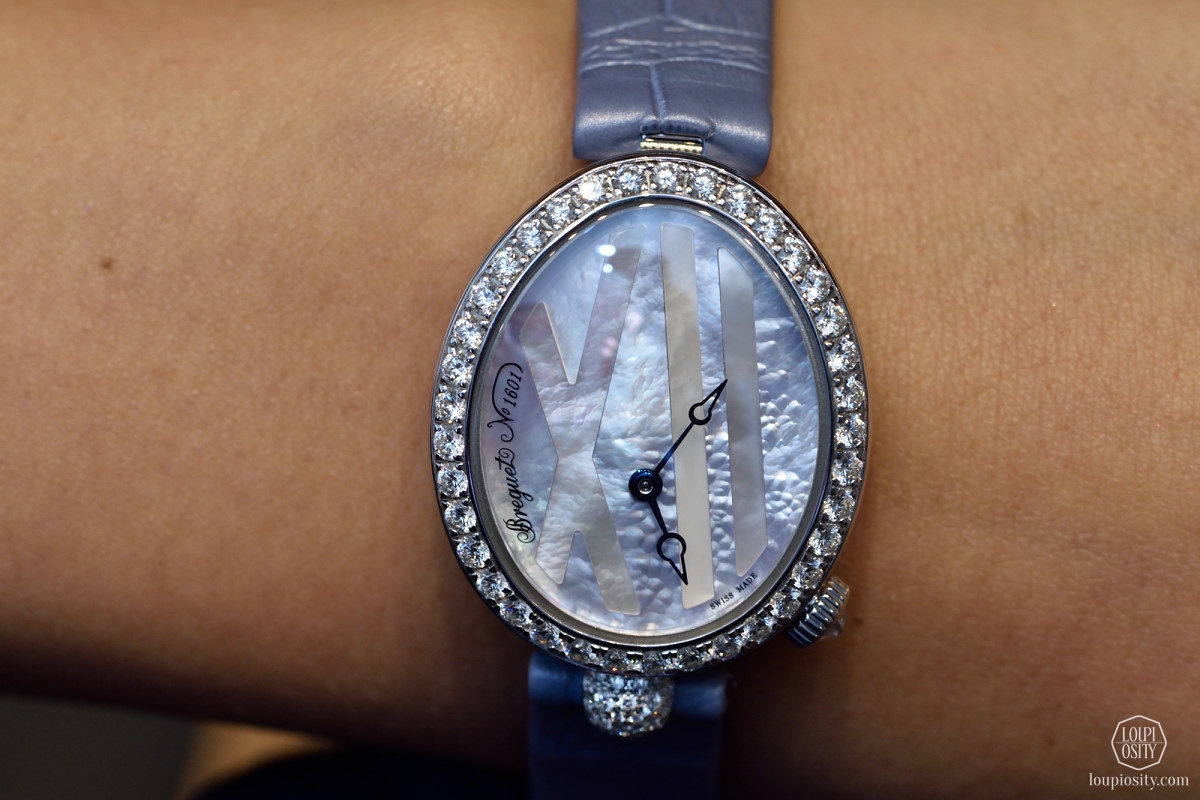 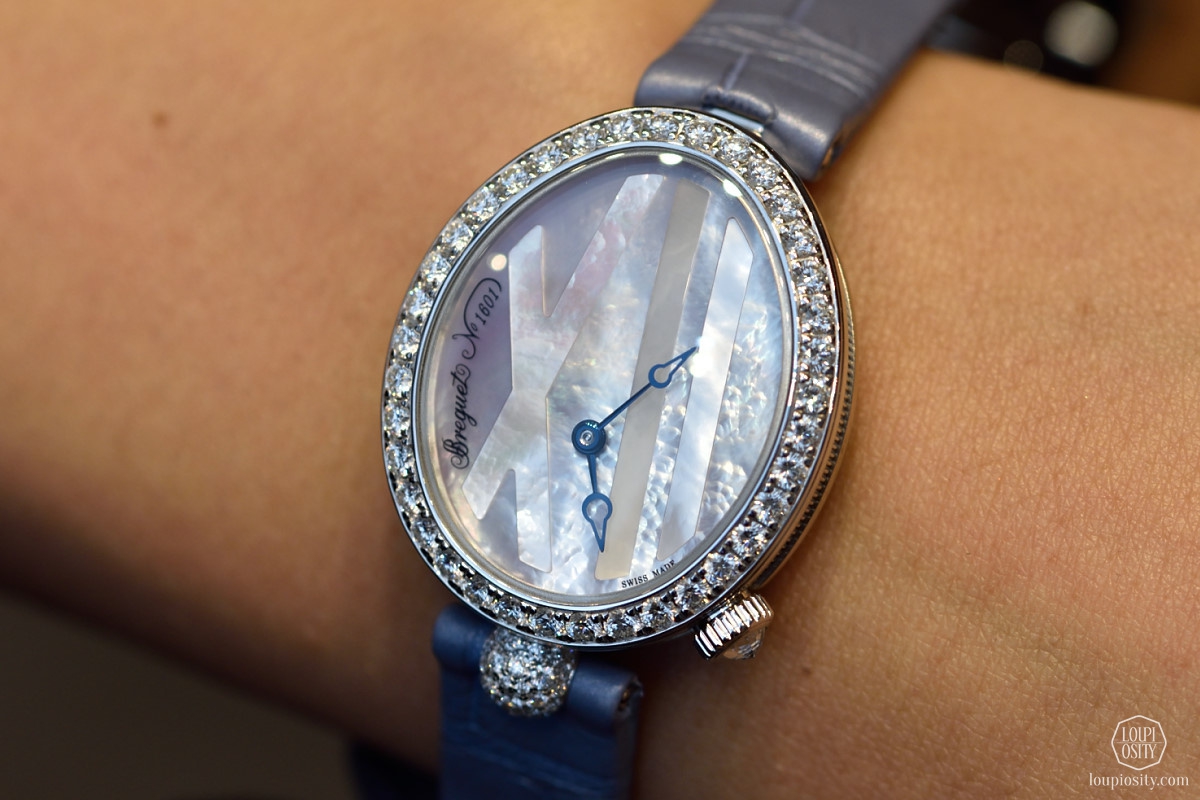 Breguet showcased a technically even more complicated piece, dedicated to fine-watchmaking lovers. Surrounding the little Tahitian mother-of-pearl dial, the Tradition Dame 7038 has almost the entire gear train, including the inverted in-line escapement placed on the front. The barrel, which is decorated with a flower motif drives the hands directly. There is a tiny retrograde hand at 10 o’clock for the seconds. The case is made of white gold and the bezel is set with 68 brilliant-cut diamonds. 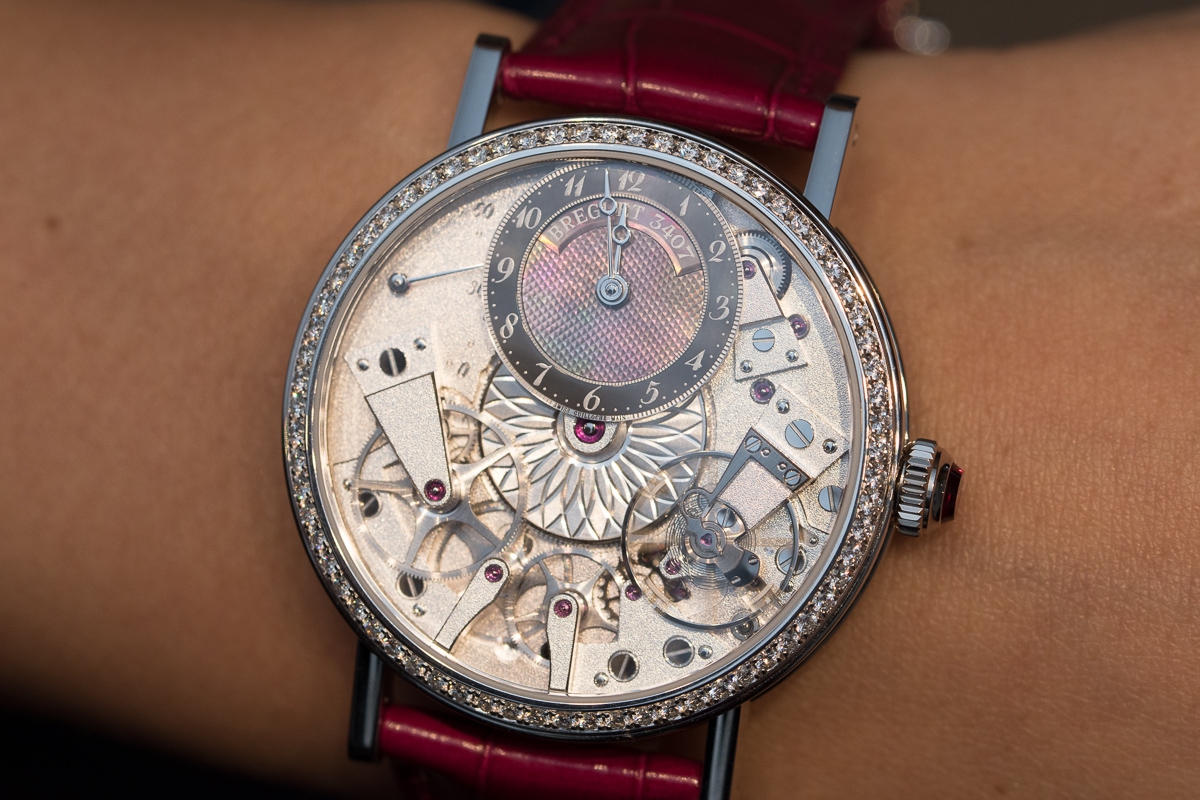 Breguet is the master of not only complications but also of the great classics. The new slim 7147 in the Classique collection with its hand-crafted engine-turned motifs is such a piece. The company has been exercising the engine-turning technique for a long time – traditional “clou de Paris” hobnailing, “pavé de Paris” cobbling, sunburst, barleycorn, waves, cross weave, checkerboard, flame patterns create a typical Breguet “look”. Artisans in the manufacture continue to use the engine-turning lathes designed and built over a century ago. The main dial on this piece is decorated with “clou de Paris” hobnailing, the sub-dial for the small seconds is enhanced with a tiny cross weave pattern. The Roman numerals and the blued steel Breguet hands, which were originally designed around 1783, are also typical. Its self-winding 502.3SD movement is only 2.4mm, which allowed an equally thin rose gold case too. 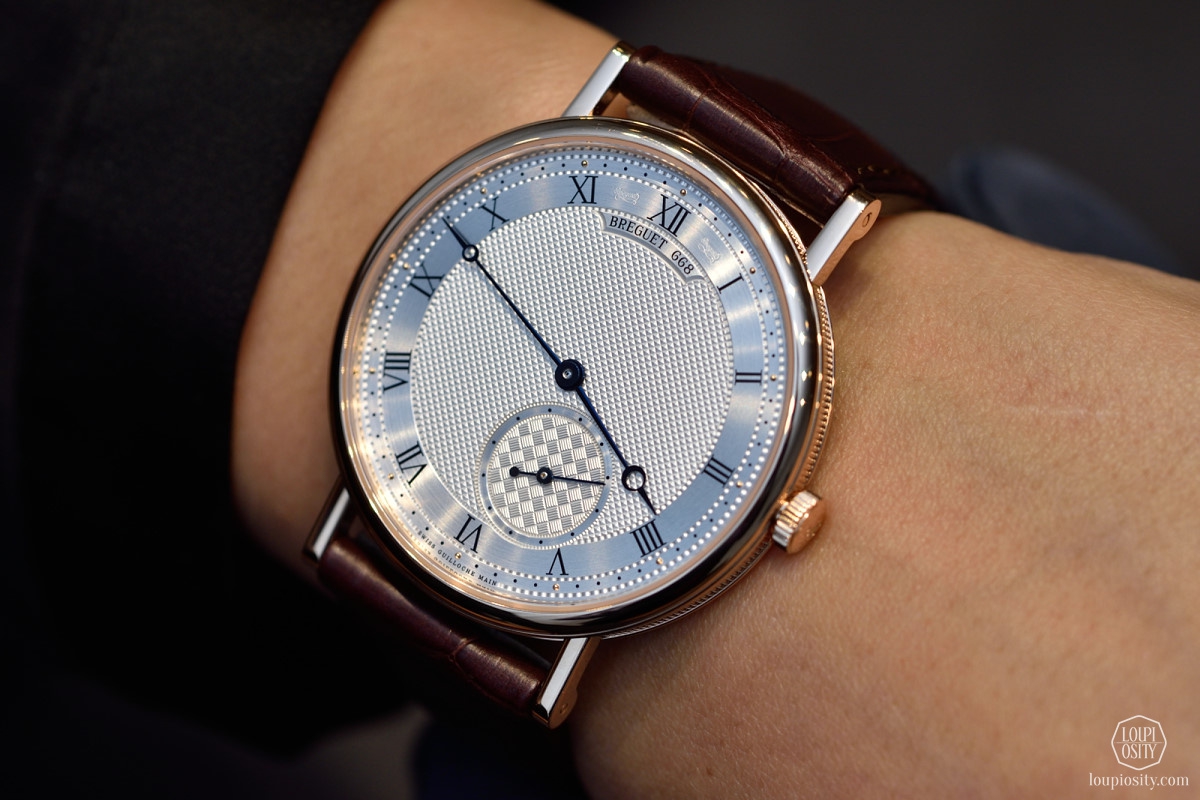 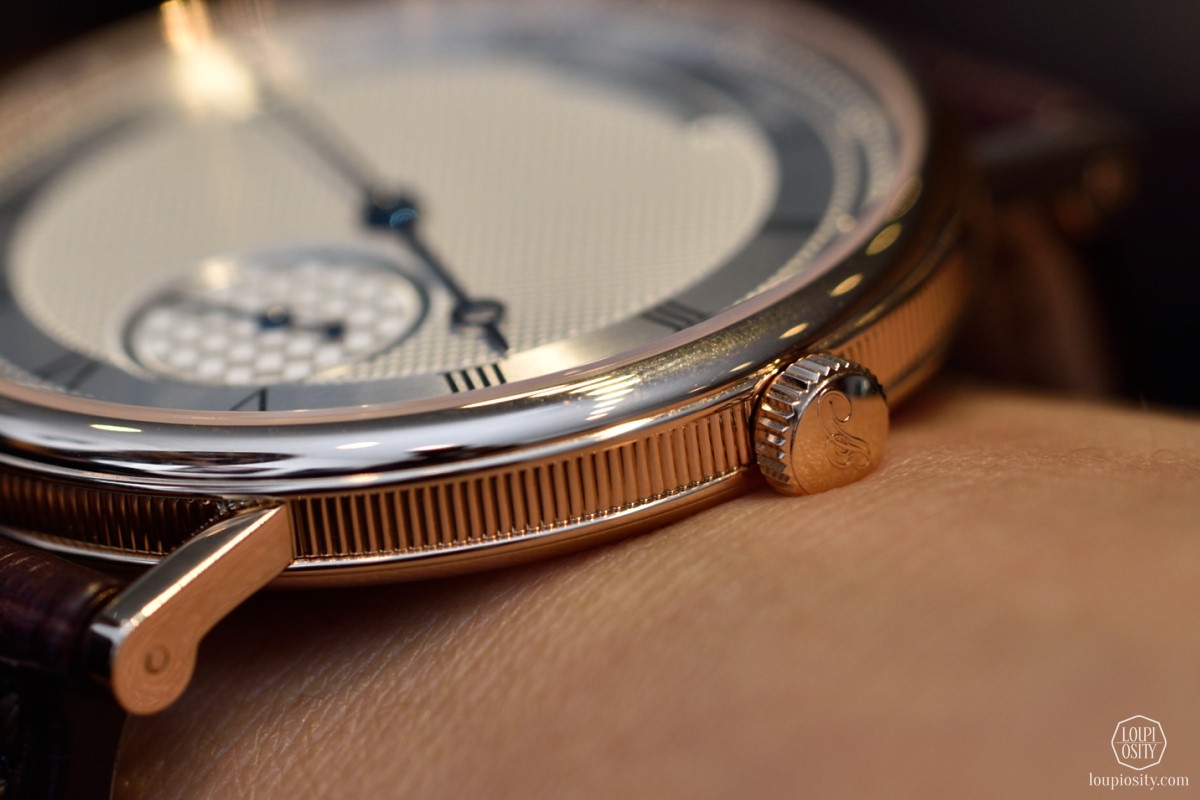 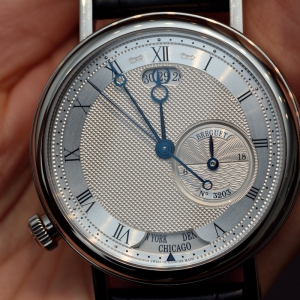 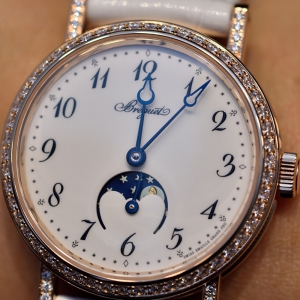 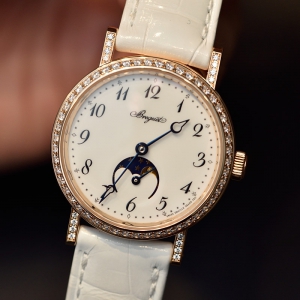