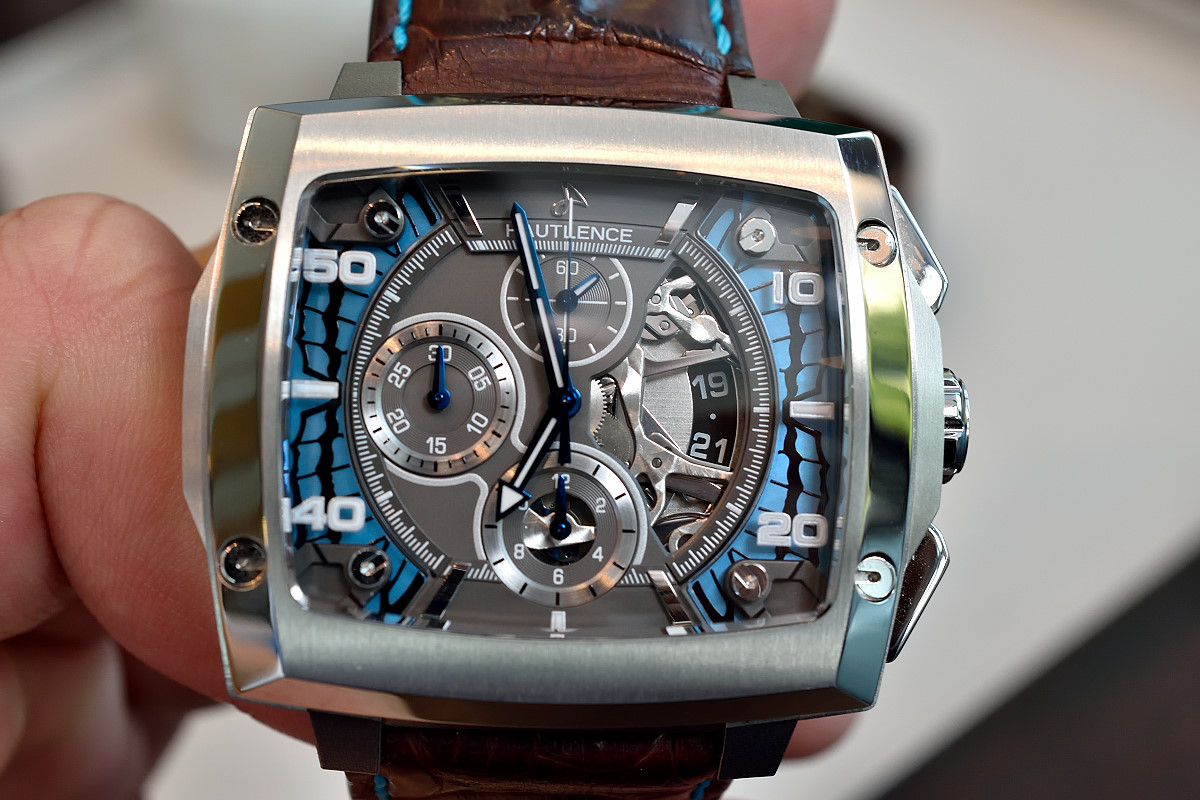 I had a chat with a friend of mine, who – contrary to me – wakes up and goes to bed with football. I was telling him about the project Eric Cantona did with Hautlence and he broke out in an emotional 30-minute monologue about Cantona being his immortal hero whose large scale photo conquered and retained the door of his room for more than a decade. Faster than the speed of light he opened tabs of videos on YouTube full of Cantona’s fantastic assists, asskickin’ scores and just plain ass kicking of course, all of which King Eric has been famous and infamous for. He has been a character who has barely left anyone indifferent – love and hate have surrounded him with a vacuum in between. Ever since he started it, collars were turned up in at least half of the world’s playgrounds especially when girls were around.

His character has left marks outside soccer too – he has been acting both in cinema as well as on stage, and as mentioned previously he recently participated in the creative process of watchmaking with the Swiss company Hautlence.

The partnership between the rebel and Hautlence was announced last September at the 10th anniversary of the latter. It was an important milestone for the brand redefining itself since being taken over by the MELB Holding (Mayland family and friends) in 2012 and is part of their efforts to address an audience previously unknown to Hautlence. These are the self-conscious men, not being conformist in doing what everyone else does, but rather crossing the boundaries twice a day. They are not particularly looking for in-house movements, but want to have a more affordable yet less uniform watch. Cantona’s charisma speaks loud to them, and his role as an ambassador is a strong message from Hautlence.

INVICTUS, Morphos limited edition by Eric Cantona is the new model offering stylish wear for 250 people. Cantona was said to have actively participated in the design process together with Guillaume Tetu CEO, and the result is rather cool. His upturned collars appear on the dial in the form of spread blue mother-of-pearl butterfly wings. The pattern of the wings is printed in black. The case is bead-blasted grade 2 titanium, and the front is a mix of blasted and polished steel. 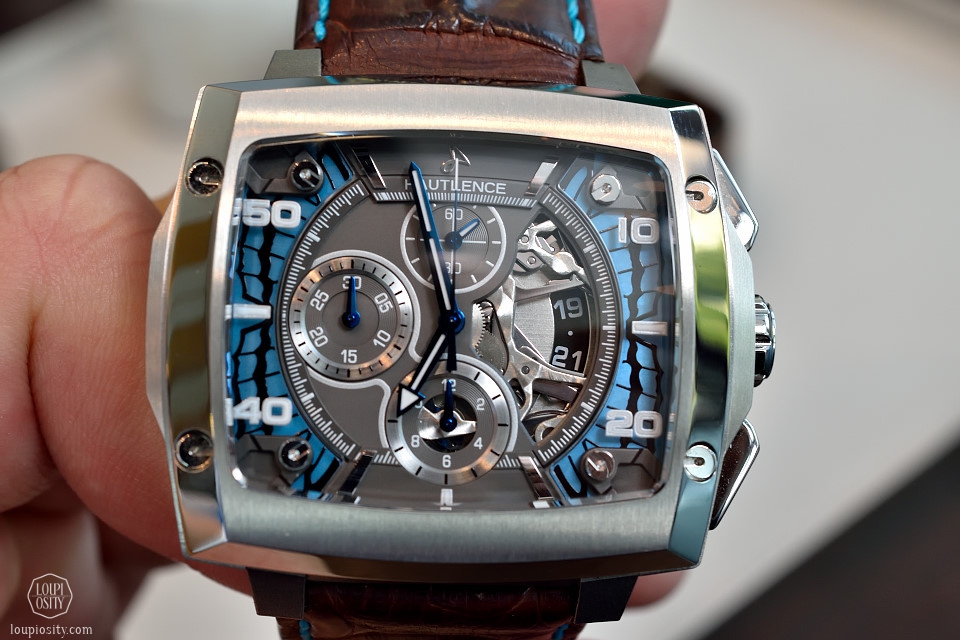 As mentioned it borrows an external movement, the Soprod A10 automatic base calibre equipped with a Dubois Dépraz chronograph module. Altogether they offer hours, minutes, small seconds, date and chronograph functions. This is in fact the first chronograph timepiece in the brand’s portfolio, and at Baselworld other versions also followed. On INVICTUS 01 the black titanium case is matched with 18 ct red gold, while on INVICTIUS 03 it all black PVD coated 316L steel. 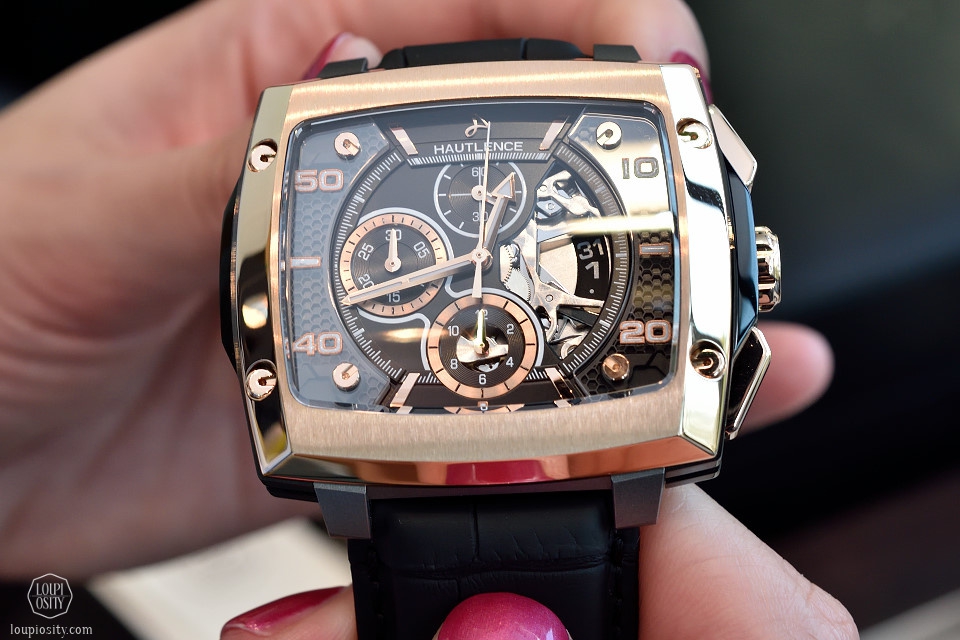 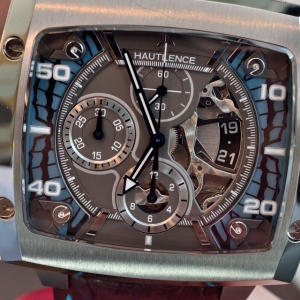 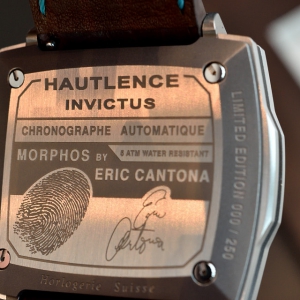 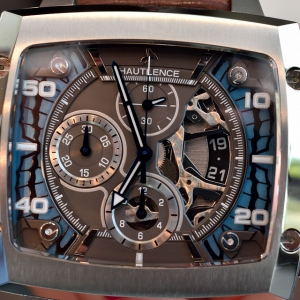 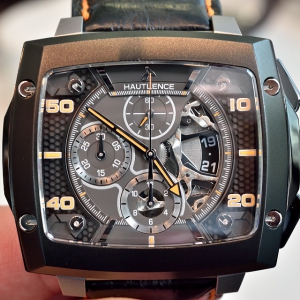 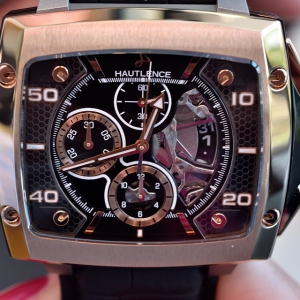 Hautlence has four manufacture calibres, and the first in the row was the manually wound 3 Hz HL in 2005. The 10th anniversary brought a new version of this too, made of black ceramic. The honeycomb pattern, the case and the front plates are all dark except the ring of the hours, the minute hand, few screws and rods, which are all 4N gold. It is a limited edition of 88 pieces. 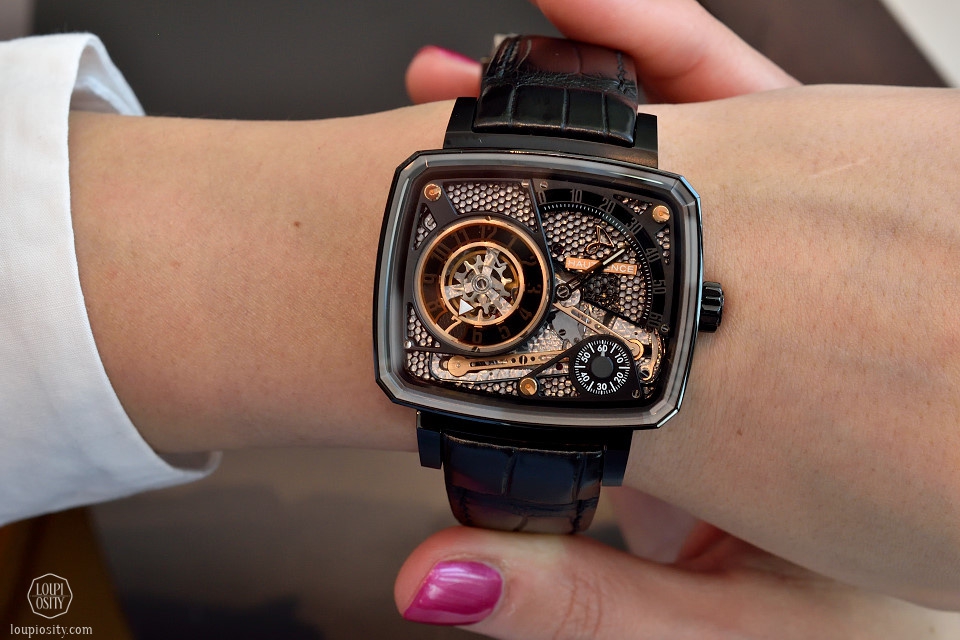 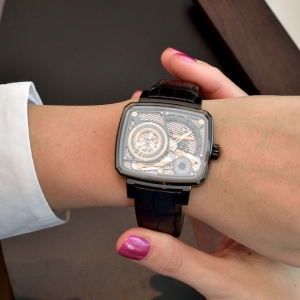 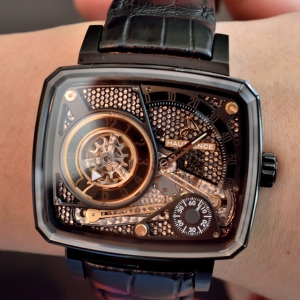 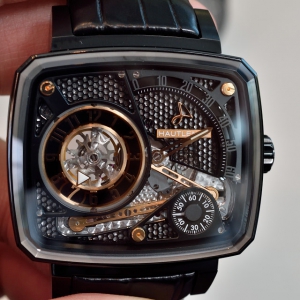 The HL2.0A is smart movement of Hautlence, which has been cased in various metals with a make-up in different colours. The more than 550-component movement animates the turn of hours by a chain 24 times a day, which lasts for 3-4 seconds each. There is a dedicated barrel to operate that, which receives energy from the main barrel wound automatically by the movements of the hand. The sapphire is curved to the sides, lending great visibility to the mobile bridge that revolves with the hours chain. We saw the HL2.4 in Basel with a new blue rubber strap. The black DLC – red version HL2.5 was also introduced. 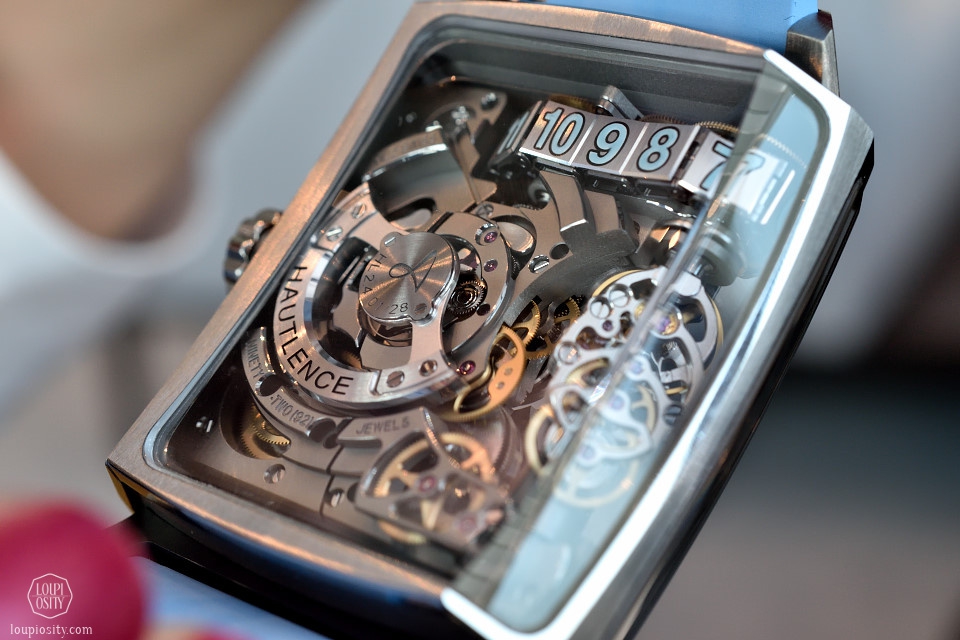 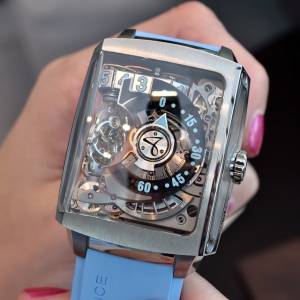 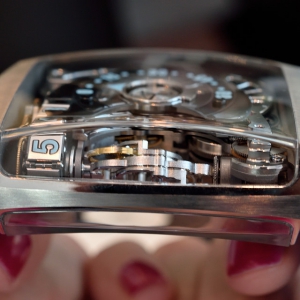 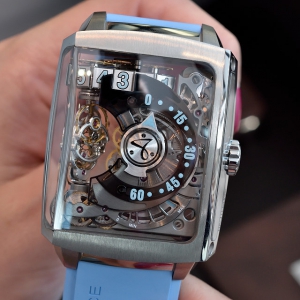 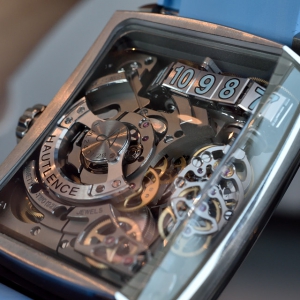 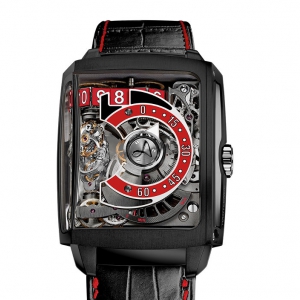 AVANT-GARDE HLRQ 04 and HLRQ 05 are built around the 3 Hz manual HLQ in-house calibre and as the name suggest, they are both quite Bohemian. On black DLC foundations the 04 brings in an orange, the 05 a blue theme. The black oval race track in the middle of the dial reminds me of the hours chain in the HL2.x series, but here it is only a design element, of course. Its right curve allows space for the orange / blue superluminova-enhanced minute numerals swept by the retrograde minute hand. This line is the only circular cased collection at Hautlence. 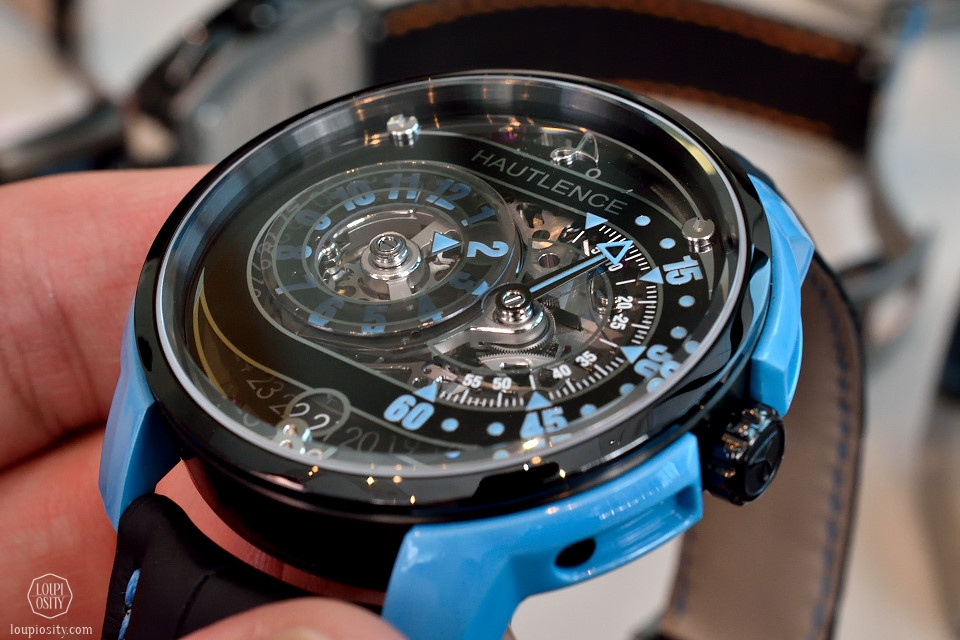 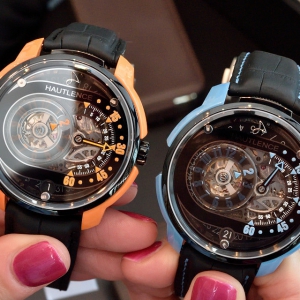 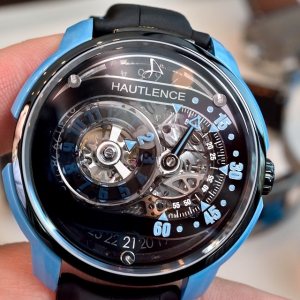 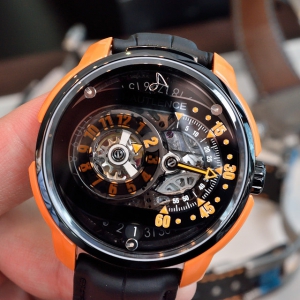 Since Hautlence gained more solid financial background, a clearance of the portfolio was started along with the redefinition of who the brand is talking to. 4 such complex in-house calibres for a company of the size of Hautlence is not a few, thus it seems to be a reasonable step to launch models built around movements from well-respected external parties, widening the potential range of buyers. Being partially owned by MELB Holding, there is a clearly stated goal to utilize synergies better with other companies in the same group, such as H. Moser & Cie. With the Gentlemen Rebels Club (Hautlence’s owners club) and particularly the individuality of Eric Cantona the company is sharpening the vision of its prospective buyers which makes the introduction of the new product line, INVICTIUS, rather strong.

Photo credits: Hautlence, Loupiosity.com.
All registered trademarks are property of their respective owners.
All rights reserved.

HL2.3 PUNK by HAUTLENCE This May HAUTLENCE released its latest timepiece, in line with their rebellious spirit, the HL2.3 PUNK.The art of enamelling - visiting Ulysse Nardin So far from the Freak-tech designs as they can possibly be, Ulysse Nardin preserves century-old techniques. Enamelling is what they are particularly known for. We visited their specialist workshop, Donzé Cadrans.Beware of Blast During the Geneva Watch Days, Ulysse Nardin showed us the new and edgy Blast collection at the Geneva flagship store.