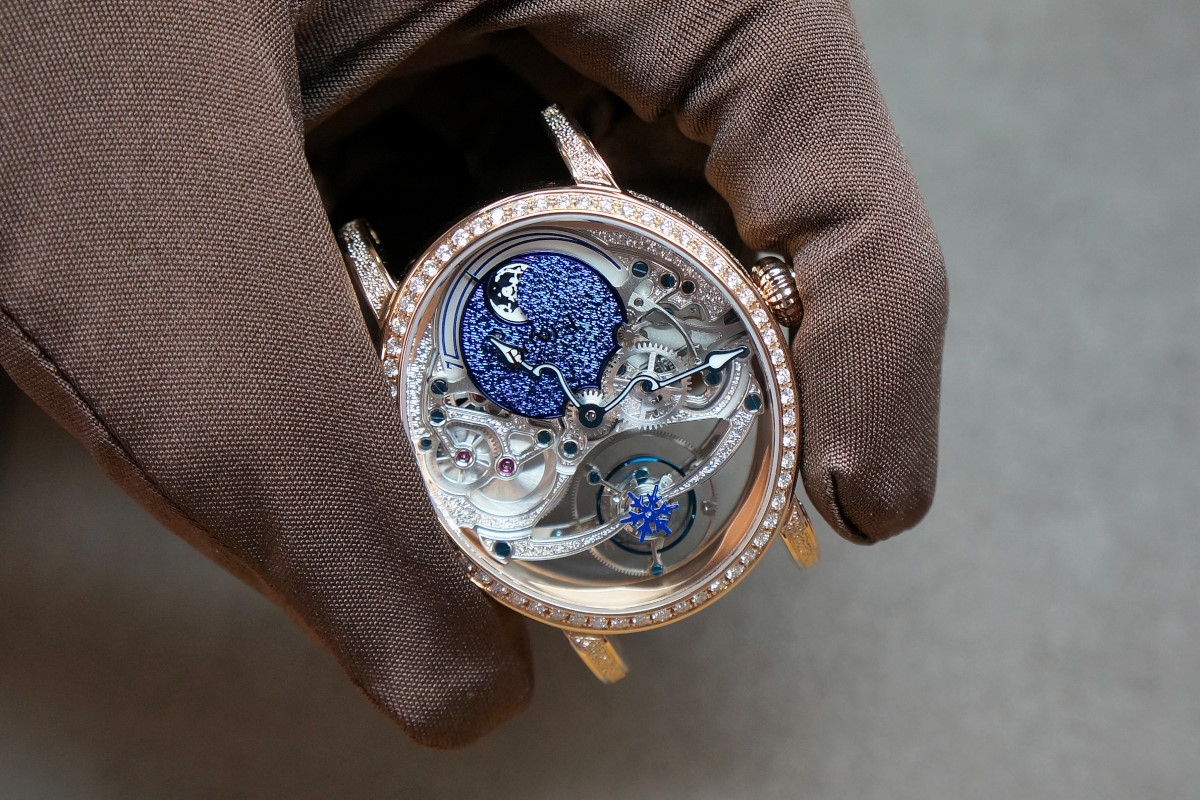 Advent found me this year at Lake Neuchatel. I joined Bovet to celebrate the 10th anniversary of the Fleurier Quality Foundation with fellow establishing brands, Chopard, Parmigiani and Vaucher. Similarly to how delicately selected ingredients and hand movements practiced to perfection produced the delicious red tuna steak on my plate in Hotel Palafitte, outstanding timepieces are created from the finest materials by the most experienced fingers. Rigorous testing of developed masterpieces and acknowledging quality is what the Foundation received as its mandate a decade ago.

The tuna and fine-watchmaking reminded me of a film I had seen few days before, called Jiro Dreams of Sushi. It is about an 85 year-old Japanese man and his son, who have the world’s first 3-Michelin star sushi restaurant situated in the Tokyo metro. His devotion to his job and the love he has (and which his son has no choice but grow to have) is captivating. Still, at the age of 85, he is restlessly perfecting his technique for sushi making. At one point he puts it this way: “All I want to do is better sushi. There is always a yearning to achieve more. I’ll continue to climb, trying to reach the top, but no one knows where the top is”. – Incredible dedication to quality, isn’t it?

From many angles I found an analogy between Jiro’s perfectionism and that of some of the watchmakers I have met so far.

The anniversary event gave me the opportunity to do what I greatly enjoy – to browse around the watchmaking workshops and be curious. Part of the programme was gaining insight into how the Parmigiani movements are made, visiting the Chopard and Bovet manufactures and attending a press conference with the participation of the brand owners and CEOs as well as partaking in a dinner at the Hotel Palafitte.

They say that in fine-watchmaking three elements must be avoided: dust, water and trouble. Thus it is no surprise that in the manufactures they pay careful attention so that the equipment and surroundings are as dust-free as possible, that the movements are not near water or humidity and that the masters of the complications can work in truly peaceful and undisturbed circumstances.

Fans of fine watchmaking have similarly high expectations regarding the pieces they purchase to the watchmakers during their work. Achieving the extremely high technical and aesthetical standards called to life the certification such as the Poinçon de Genève, the COSC (Contrôle Officiel Suisse des Chronomètres) or the Fleurier Quality Foundation certification. It is an exciting challenge for the brands to constantly improve their watches and manufactures and to measure and certify their success via these independent organisations.

Switzerland has consciously built the “Swiss made” brand for decades and has been investing a great deal in establishing a central position in fine-watchmaking. The “Swiss” brand besides being a mark of origin has elevated to being a quality indicator, too. The Swissness bill has strict requirements, which will be further strengthened as the Federal Administration decided to tighten the current regulations. The Federation of the Swiss Watch Industry (FH) has been lobbying for this since 2007, and in line with the recent decision, the board meeting of 17 December 2014 announced that under the new policy timepieces must contain a minimum of 60% Swiss value for the movement and also the complete watch and the technical development (including designing and prototyping) must be done entirely in Switzerland. Certificates, such as the FQF, beyond measuring and testing final product qualities, prescribe timepieces to be entirely manufactured in Switzerland to further strengthen the country’s position on the global map of haute horlogerie.

The idea of this certification originates from discussions between Karl-Friedrich Scheufele and Michel Parmigiani in the early 2000s. Mr Pascal Raffy felt that the Bovet Manufacture itself operates according to the FQF’s principles and thus joined the founding members. The fourth company Vaucher was one of the oldest movement creator families in Fleurier, and is today part of the Sandoz Family Foundation.

Albeit FQF was established by the 4 companies from Fleurier who competed for the customers with each other, the foundation encourages other Swiss watchmakers to submit their pieces to be judged by the one of the strictest aesthetic and technical standard criteria-systems of the profession.

The procedure for obtaining this certification, conducted in an objective manner by the Technical Committee, which is independent of the participating brands, is subject to precise conditions: 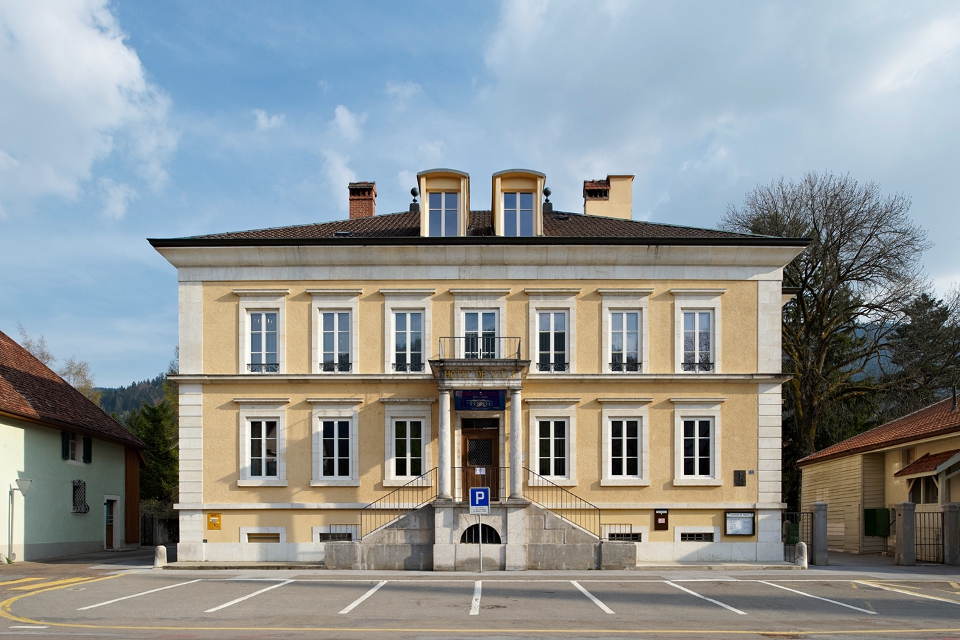 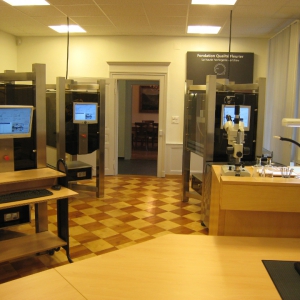 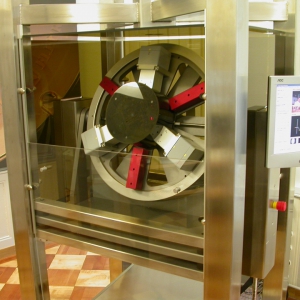 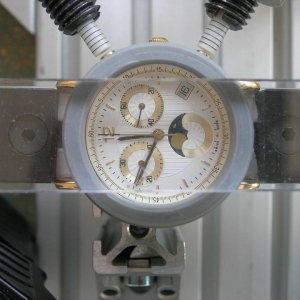 The Fleurier Foundation upholds three criteria: independence from the brands, the complementary nature of the tests and the ability for reproduction in watchmaking. They consider how fast technology develops and what new materials and alloys are created, thus the certification must be “alive” and must adapt to these changes.

On the 11th December 2014 FQF announced the creation of a new Laboratory, the FQFLab, the facilities and services of which are made available for testing, analysis and controls for any specific request by any Swiss brand, but without certification – Quality Fleurier Certification remains exclusive to the partnering brands that submit models to complete the entire QF testing procedure.

It is an interesting question, to what extent such a certificate influences the fans and buyers of the highest category watches, and whether or not in the long-run such a certificate can play a price-influencing/value-preserving role. Would we see timepieces possessing FQF certificates be more demanded in auctions? And what is that planned minimal unit number of a model when it is worth creating 5 extra units for the destructive tests?

At the onset of the 21st century Pascal Raffy revived the Bovet and Dimier brands, not only with significant investments but by infusing it with a spirit that celebrates perfection, precise details and artistic design. I had already the chance to visit the Bovet workshops in Tramelan, Fleurier and Geneva in 2013, which has a truly family milieu filled with tremendous creative energies. Breathtaking design and smart mechanics are both characteristics to Bovet pieces – a great example is the Amadeo System, which turns the wristwatch into pocket watch (so emphatic in Bovet’s history) by a click of a clips. The Bovet Amadeo Fleurier Rising Star is also certified by the Fleurier Quality Foundation. 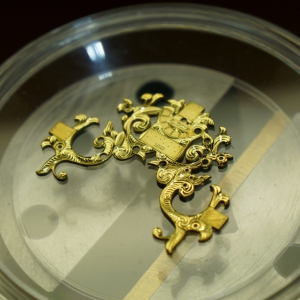 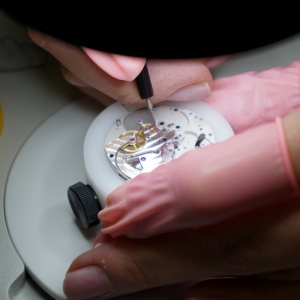 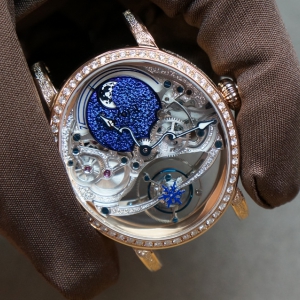 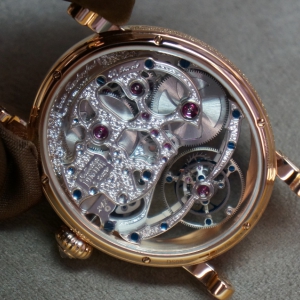 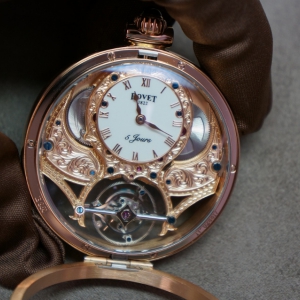 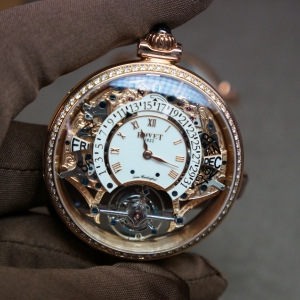 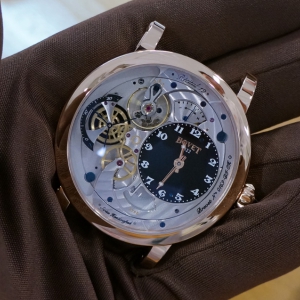 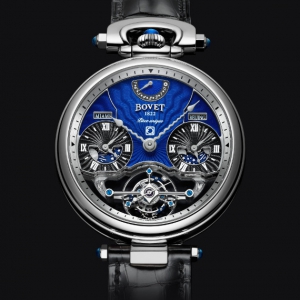 Chopard, owned by the Scheufele family is still entirely independent. Caroline and Karl-Friedrich Scheufele are running the company as co-presidents. In the Manufacture in Fleurier, Rue des Moulins, Chopard has in-house expertise and experience in more than 45 different crafts. We walked through the technical department, where movements are designed, the micromechanics, where the components are built with CNC and electric discharge machines, and the quality control and decoration departments. In the later, 2015 Baselworld pieces were getting dressed by steady hands. 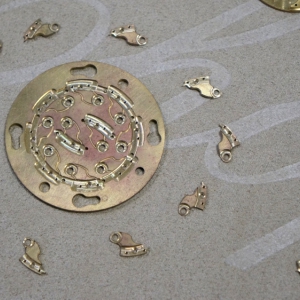 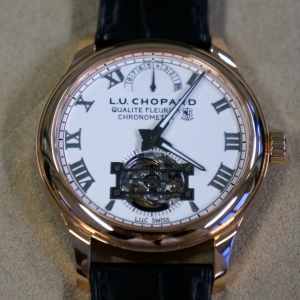 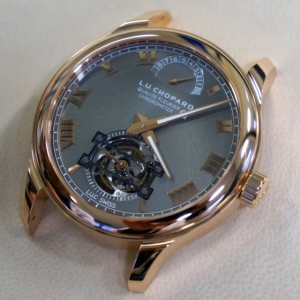 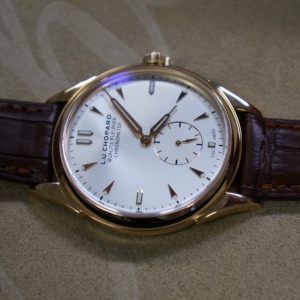 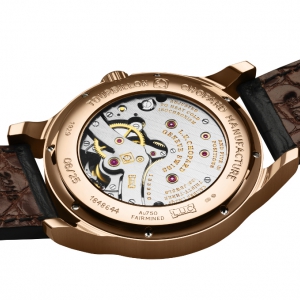 Similar to several other Heads of fine watchmaking brands, Michel Parmigiani also has great experience in the restoration of old mechanical watches and was educated at La Chaux-de-Fonds and Le Locle. Later he worked on the restoration of the Sandoz family’s collection, then in 1996 they established the Parmigiani Fleurier together. The models are quite diverse, but easily recognizable. They offer traditional styled timepieces, such as the Tonda 1950, haute horlogerie pieces like the Toric models or the Ovale Tourbillon to the avantgarde Bugatti Super Sport, based on the Bugatti Veyron supercar. From 2009, Parmigiani cooperates with Pershing (the Italian Yacht Company, producing luxury open motor yachts for almost 30 years) and presented the Pershing Aquatic sport watches.

The Vaucher family, originating in the 18th century, produced their first movements in Fleurier. The manufacture that is today the member of the Sandoz Family Foundation, participates in various “haute horlogerie” projects producing mechanisms for brands from sketch to reality. Parmigiani Fleurier pieces incorporate Vaucher movements tailored and decorated. 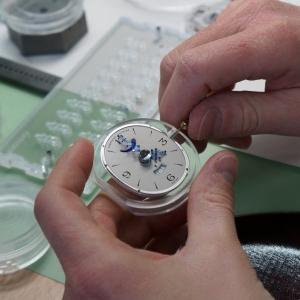 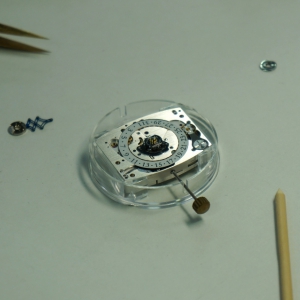 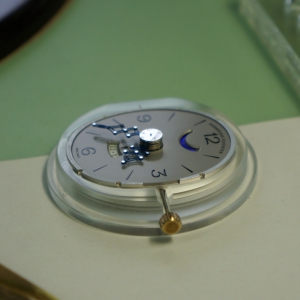 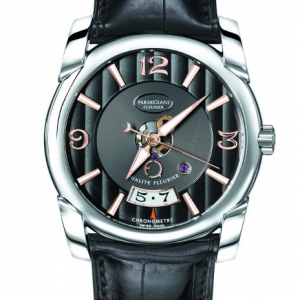 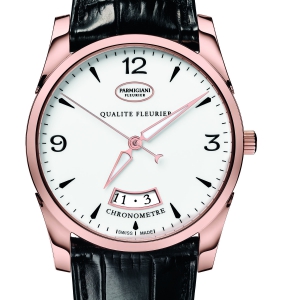 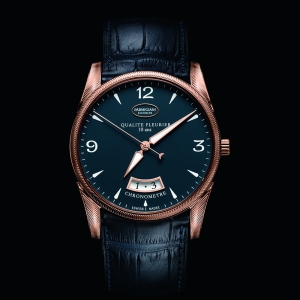