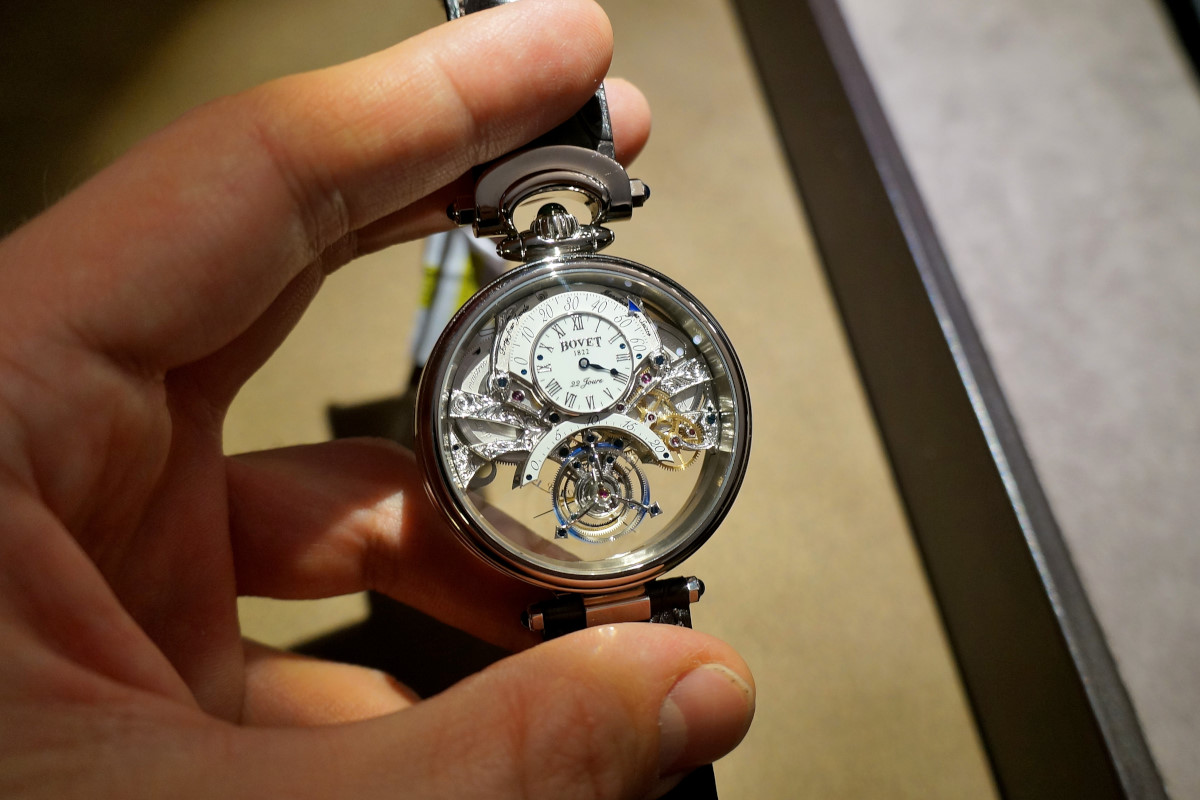 For years Impératrice Salon has been the place where Bovet novelties are first introduced to connoisseurs. Hotel Beau Rivage and Bovet Fleurier are both messengers of the 19th century who have successfully found their contemporary voice past-millennium. They are family businesses with all the dedication and customer intimacy this may bring. In fact, implacable determination and particular sensitivity to individual needs have been two of the main reasons why they have managed to survive the hard times and restart after dormant periods.

This year Bovet presented new models that will make the company’s boat sail for long. As the visionary Pascal Raffy announced it last year, the versatile Virtuoso II movement, the first non-tourbillon in-house developed and produced movement of the House, would be a central element in future Bovet Fleurier timepieces. Therefore, it was no surprise that the brand came out with novelties incorporating this calibre. What was however a surprise, is that they launched no less than three new timepieces in 2015 with this calibre – one in the Dimier collection and for the first time the movement was applied in pieces housed in the Amadeo convertible case too.

Éduard Bovet has earned a name for reliable artisan pocket watches in the 19th century and the Bovet name has become a synonym for the timepiece in China. Beautiful miniatures hand-painted on Bovet timekeepers have amazed the clientele, ready to buy immortality in the guise of portraits. 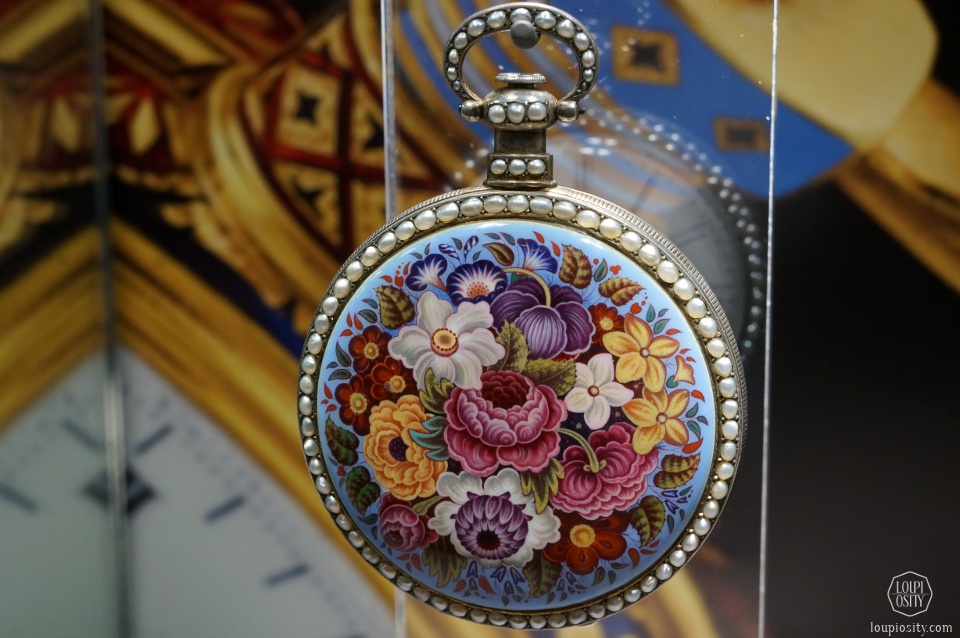 Calling imagination for a boundless play on the dial, the Amadeo® Fleurier Monsieur BOVET offers a great space for bespoke enamel, miniature paining or gem-setting creations. The timepiece, which incorporates the aforementioned movement as well as the Amadeo® convertible case system will probably be a highly sought after piece for customizations. Via the case concept one can easily turn the timepiece to a reversed wristwatch, a pendant, a pocket watch or a table clock. It is offered in 18K white and red gold. 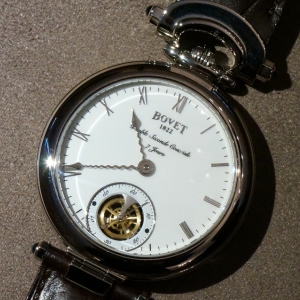 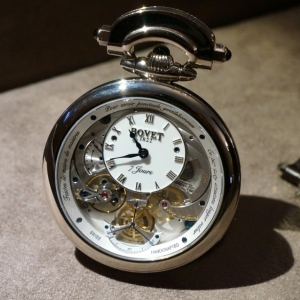 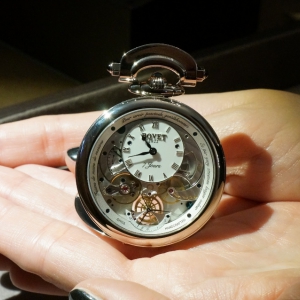 Amadeo® Fleurier VIRTUOSO V is another interpretation of the Virtuoso II movement – on one side of the reversible timepiece watchmakers implemented a jumping hour index with a retrograde minute hand sweeping the dial from left to right in a 160 degree area. The watch face has beautiful depth; it reminds me of old stairway-pairs that are found in villas, running slightly curved on the sides of the hall to meet again on the balcony. Lacquered and Fleurisanne pattern engraved dials are alternating as they surround the seconds cage and lead up to the main display. As we have seen it in the Virtuoso II models the seconds are displayed on both sides by a patented co-axial mechanism that reverse the direction of the spin so both sides show the passing of seconds clockwise. 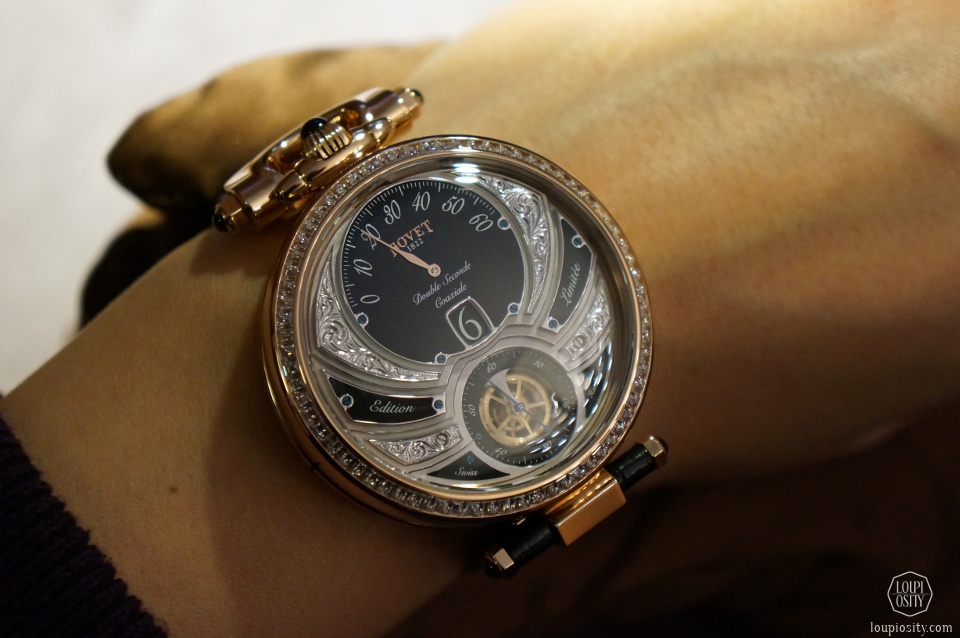 When Bovet announced the Virtuoso II movement in 2014, the first two models to receive it were in the Dimier collection – Récital 12 and Récital 15. Demonstrating the adaptability of the same base calibre, Bovet presented it this year in Récital 17, an open-worked triple time-zone piece that also displays a lunar calendar. Having the local time centred, the two foreign time-zones were placed at 3 and 9 o’clock with a legible number plate that may have a lacquered, guilloché or mother-of-pearl surface. These cuddle up individual day and night indicators. Above the foreign time displays cities of the 24 time-zones can be selected by pushers sunk into the case on the side. A double moon phase indicator at 3 o’clock completes the list of functions that follows the lunar cycles in the Northern and Southern Hemispheres requiring adjustment once in every 128 years. 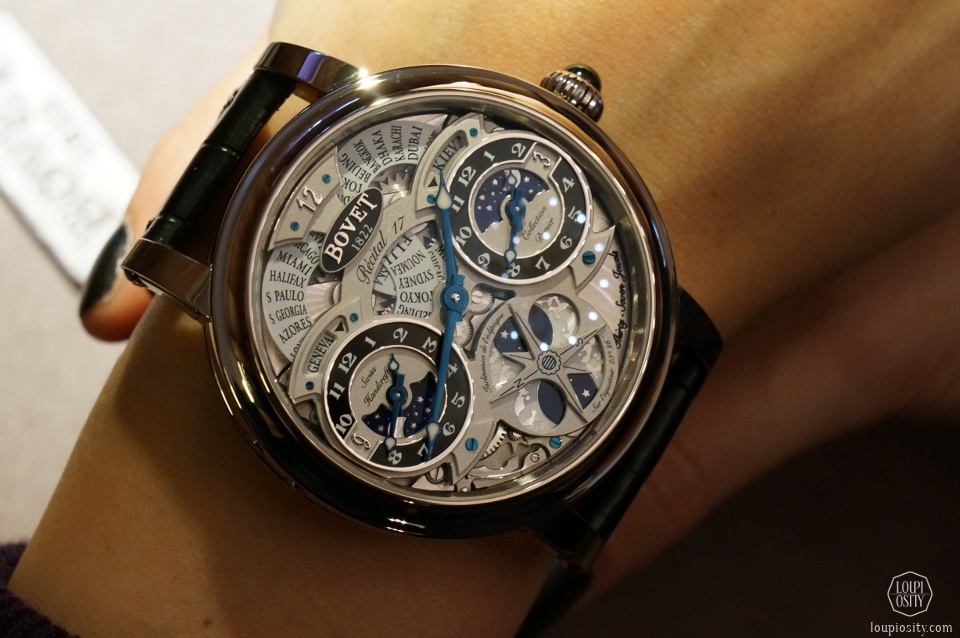 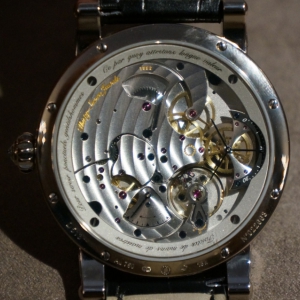 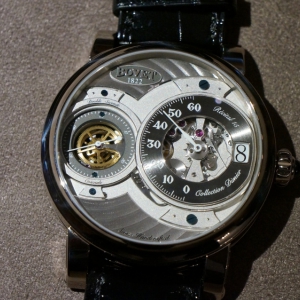 Following such an impressive prelude of haute horlogerie, Bovet enhanced the experience even further by presenting the Amadeo® Fleurier BraveHeart® to us. The four years of development, which resulted in the flagship product of the company, produced components that have appeared first in other pieces. For example the double co-axial seconds display mechanism which was first applied in the Virtuoso II movement was originally invented in the BraveHeart project. The timepiece that shines in its full glory hides other secrets too…

It is easy to see that the main feat of the timepiece lays in the tourbillon. First, it is open on both sides and there are no visible bridges like in traditional tourbillon, nor does the lower extremity of its axis end in a ball bearing fixed to a plate, as in flying tourbillon. The trick, which has become a patent too, is that the entire carriage is supported in the middle of its axis, which also results in an even weight distribution on the two sides of the axis. On one side the escapement is positioned, while the balance wheel and balance spring are on the other. The balance wheel is also completely new – in fact it is not a wheel but three fellies on very light and profiled aluminum arms in order to allocate the balance weight on the circumference only. New hairspring was also developed, the expansion of which is concentric to its centre of gravity. The result of these innovations is a significant improvement in chronometric performance especially in vertical positions. 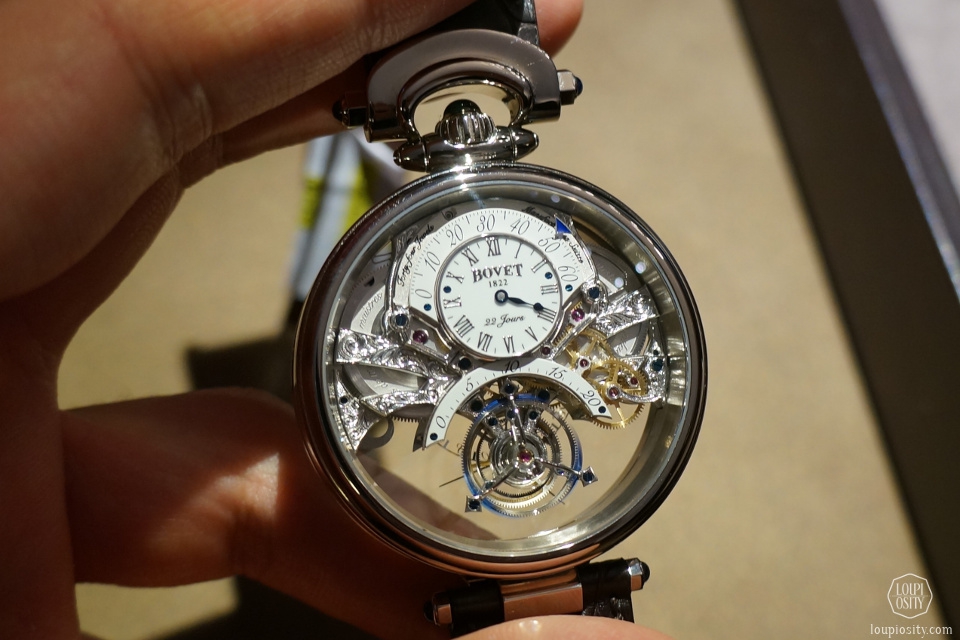 This is in pair with a huge running time of 22 days enabled by the two large barrels and the very economical energy consumption of the mechanics. The barrels hide more than a meter long spring each that store the energy – to reduce the winding time required engineers developed a differential mechanism, which halves the number of crown rotations needed.

Seconds are displayed on both sides in the same manner as in the Virtuoso II movement, but this time it is applied on the flying tourbillon carriage.

Beyond the chronometric excellence the Amadeo® Fleurier BraveHeart® is a multi-faced aesthetical marvel, thanks to the Amadeo® case and the perfect finishing applied. The manufacture will limit the pieces created to 30 in 18K red gold, 30 in 18K white gold and 20 in 950/1000 platinum. 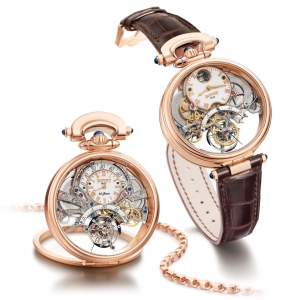 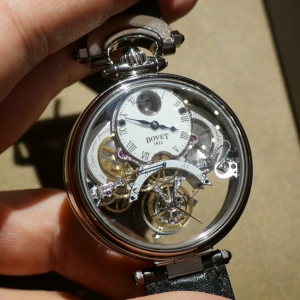 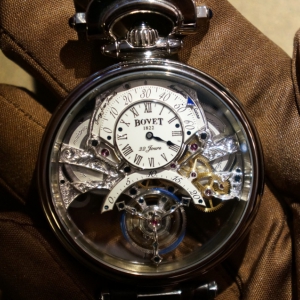 As usually, Bovet displayed historic and unique pieces, too 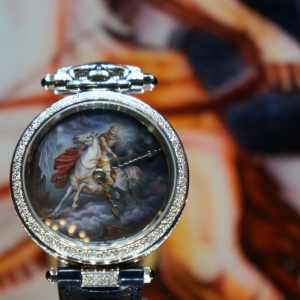 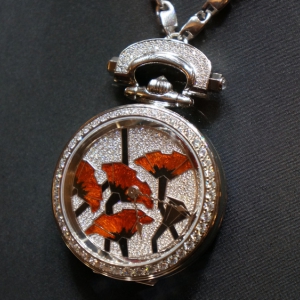 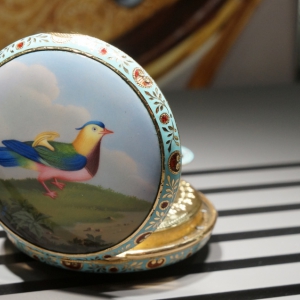 Photo credits: Bovet, Loupiosity.com.
All registered trademarks are property of their respective owners.
All rights reserved.